Question: In California, you cannot take a picture of a man with a wooden leg. Why not?

Paul was up early and get the house ready to receive Sue’s sister Diane.  That means get towels out, make sure we have coffee, check the milt and cereal, and make a pass to see what Paul has laying around!

Paul went to the Long Beach Airport at 10:00 AM which is only 11 minutes away… Perfect, Diane was at the curb ready to be picked up.  We came home and visited for a while before going to the Chinese restaurant for a late lunch!

Before leaving for lunch we heard something in the front yard… Yes, it was the infamous “Orange Napper”.  Vicky was out picking our blood oranges.

Did You Know? The distinctive dark flesh color is due to the presence of anthocyanins, a family of antioxidant pigments common to many flowers and fruit, but uncommon in citrus fruits.  Chrysanthemin (cyanidin 3-O-glucoside) is the main compound found in red oranges.  The flesh develops its characteristic maroon color when the fruit develops with low temperatures during the night.  Sometimes, dark coloring is seen on the exterior of the rind, as well, depending on the variety of blood orange. The skin can be tougher and harder to peel than that of other oranges. Blood oranges have a unique flavor compared to other oranges, being distinctly raspberry-like in addition to the usual citrus notes. 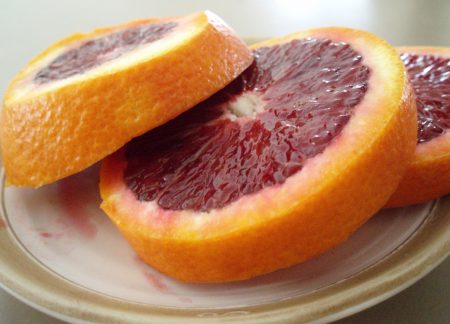 A quick inspection of her front yard revealed her “loot”.  Caught in the act.  Of course, Vicky came in and visited with Diane and Paul finished off the orange napping task! 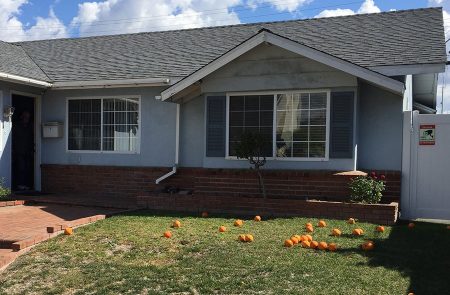 Enough oranges for friend Ed and her son… Good job!

Our cleaning folks decided to come by at  2:30 PM so after lunch at Panda Inn we headed to Old Ranch to sit by the fireplace and talk.  Paul felt just like one of the girls. We then headed home for an evening of talking and a little more food to eat. 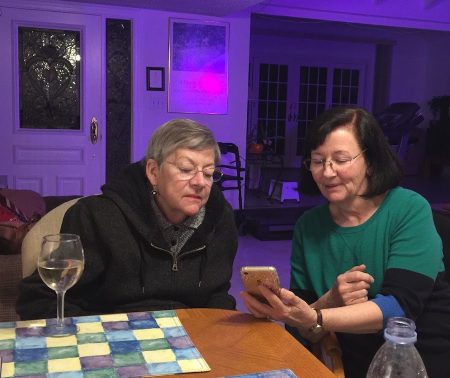 Sue is enjoying her glass of “wine” while getting the latest on the family.  Hannah is finishing law school and Lisa has a great job and new apartment in the San Jose area.

We decided to have some potato soup made by Rossmoor’s own Potato Soupologist, Teri Ward.  It was delicious!  Then it was time for a Hallmark mystery movie entitled “Murder, She Baked: A Peach Cobbler Mystery”.

Summary: With The Cookie Jar, Hannah Swensen has a mouthwatering monopoly on the bakery business of Lake Eden, Minnesota. But when a rival store opens, and one of the owners is found shot to death in the store, Hannah is determined to prove that she wasn’t the only one who had an axe to grind with the Quinn sisters. Somebody wasn’t fooled by the Georgia Peaches and their sweet-as-pie act–and now it’s up to Hannah to track down whoever had the right ingredients to whip up a murder. 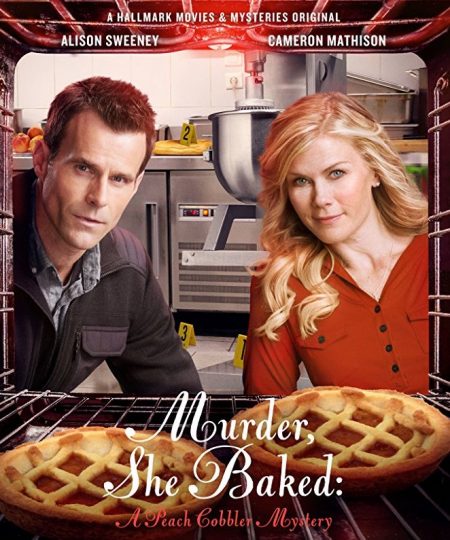 The butler did it!

We watech two episodes of Grey’s Anatomy and then crashed for the evening!  It was so nice to have Diane come down and be with us!

Just an old retired guy trying to finish out my last years on this planet loving my best friend and wife, having fun, learning, and passing on helpful things to others.
View all posts by Paul →
This entry was posted in Family, Food and Wine, Fun and tagged Dining Out, Family, Old Ranch. Bookmark the permalink.
Powered by Maribol IMDB Plugin