We had so much fun together, no matter where we were and what we were doing.  Below, at first glance, looks like a playful punch, but upon examination, I am pointing out a train on my railroad shirt that we took in Alaska.

Below we were at the old Santa Ana Elks Lodge and planning another trip to Alaska.  Our friends asked what we do for exceptions on a cruise, and Sue, being very quick to respond, said, “We take his shirt!”  I realized what she was saying and pointed out the White Pass & Yukon Engine on my shirt.

She was always so observant of everything around her, and we used to call that “situational awareness” in the aerospace world we lived in together for so many years. Sue was one of a kind and a beautiful being.  I am going through life now without my sidekick, and it is difficult at best.  Every day I realize how much I truly adored being with her and sharing our experiences. 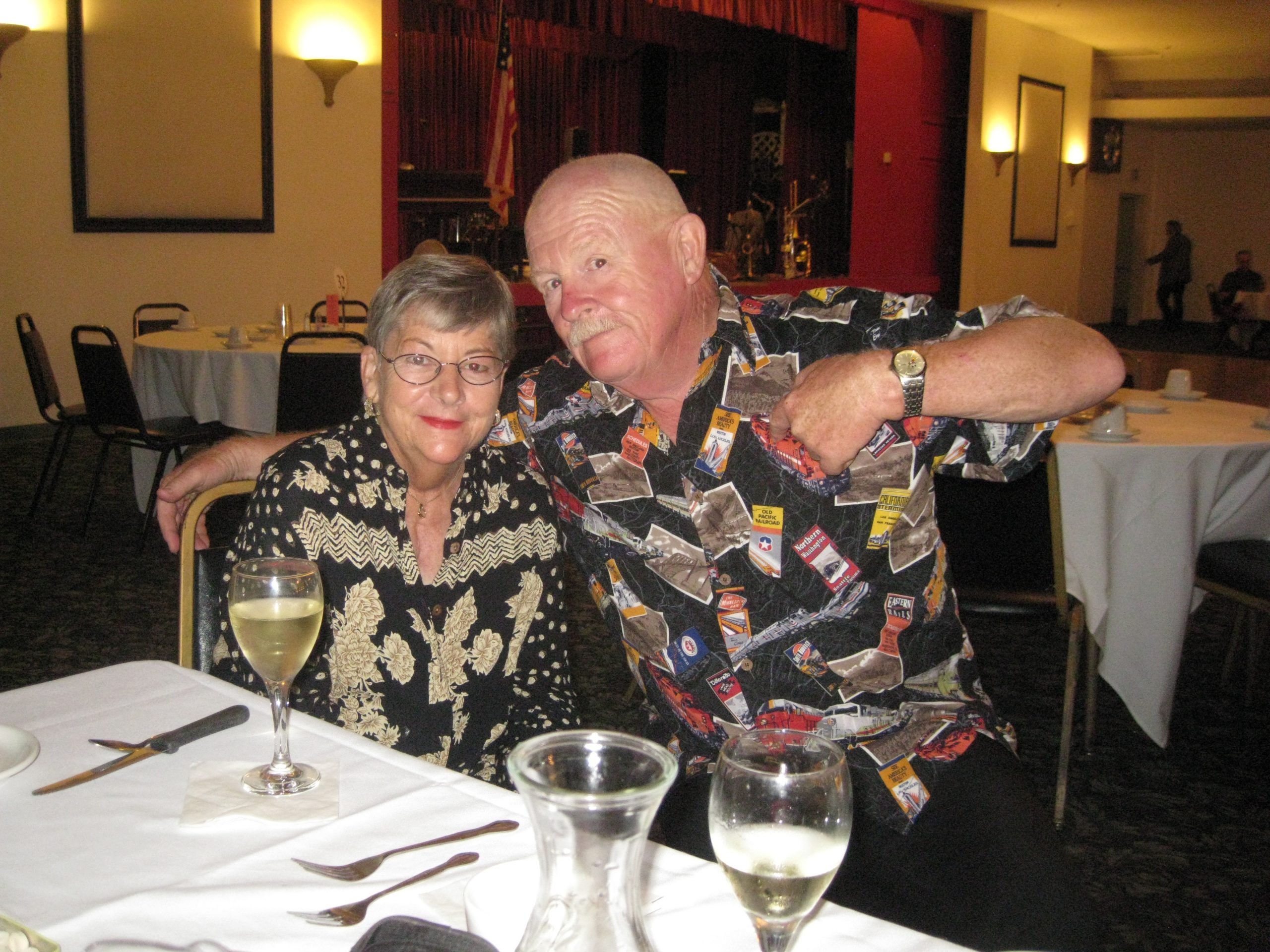 We are planning a train ride at the Santa Ana Elks!

More work!  Oh my, I never realized how much work there was to do to bring everything up to code.  But, except for a 50A 220 VAC line that goes nowhere and my inability to determine how the pool light is powered, all it well.  I decided to leave those mysteries to the electrician!

When I got up, I decided to finish off the attic rewire first, and I spend about an hour “upstairs,” installing a grounding lug and separating the grounds from the neutrals.  The fix entailed drilling a mounting hole in the attic subpanel and bolding the grounding strip to the box tightly.  Then I moved the ground (green wires) form the neutral terminals to the grounding strip separating the circuits. I would have been a fifteen minutes job if I were standing up, but I had to keep reaching into my pocket and pull out different tools. 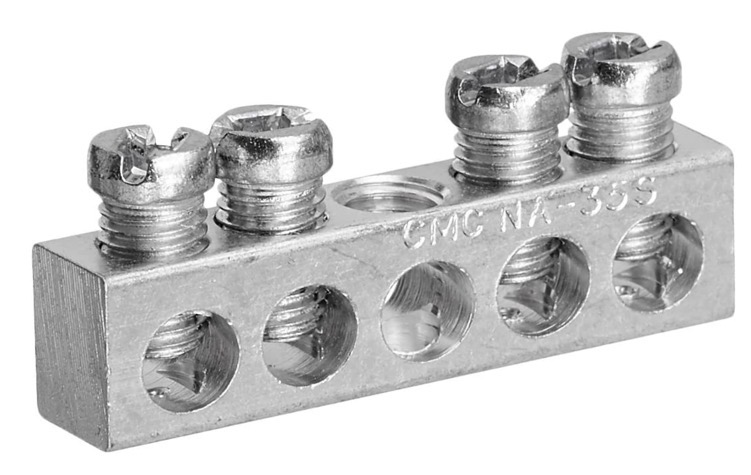 The ingenious little device is only about two inches long.

After the workout, I needed breakfast, so I whipped up some vittles, an obsolete alternative to the word victual, which is defined as food prepared to be eaten.  As I sat down, I decided a selfie was in order before the rest of the work starts.  OMG, I am a handsome devil, emphasis on “devil.” 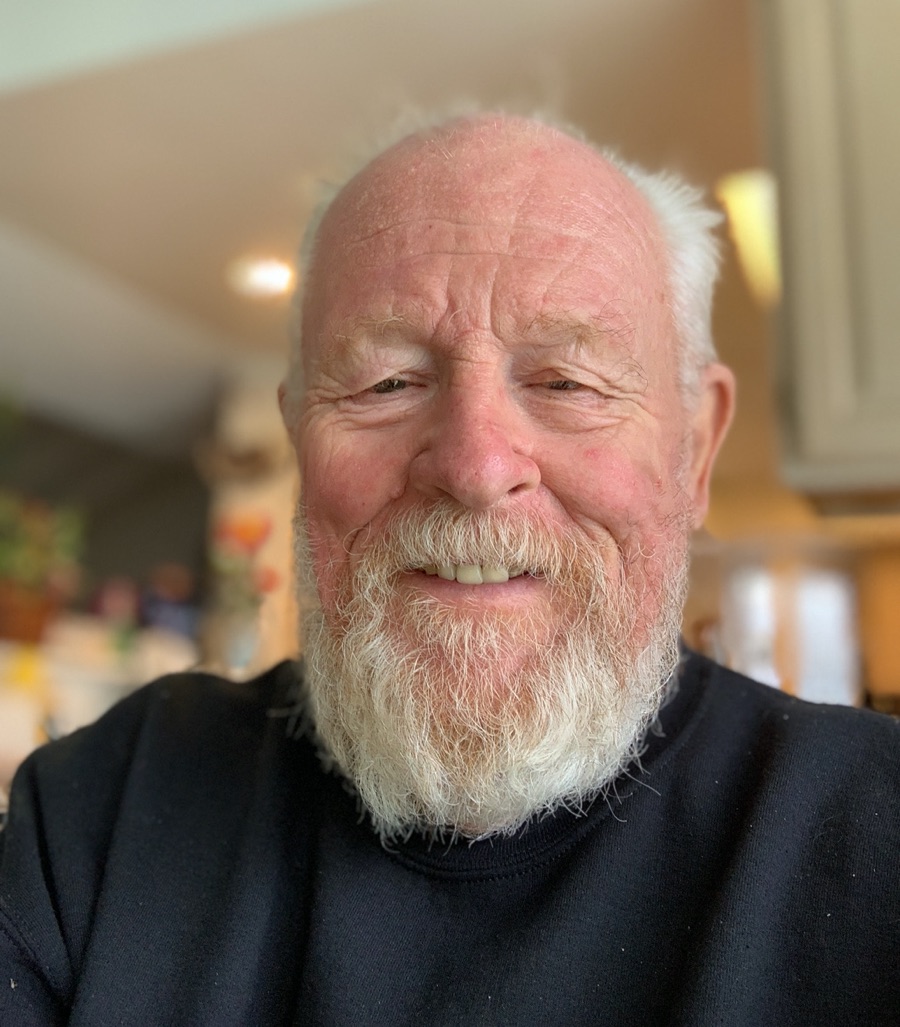 It was taken without my makeup!

Breakfast, well, it was the old standby mostly because my bacon, ham, and eggs were reaching their expiration date.  This meal held me until late in the day.

Tomorrow I will tell you about the special plate in this view! 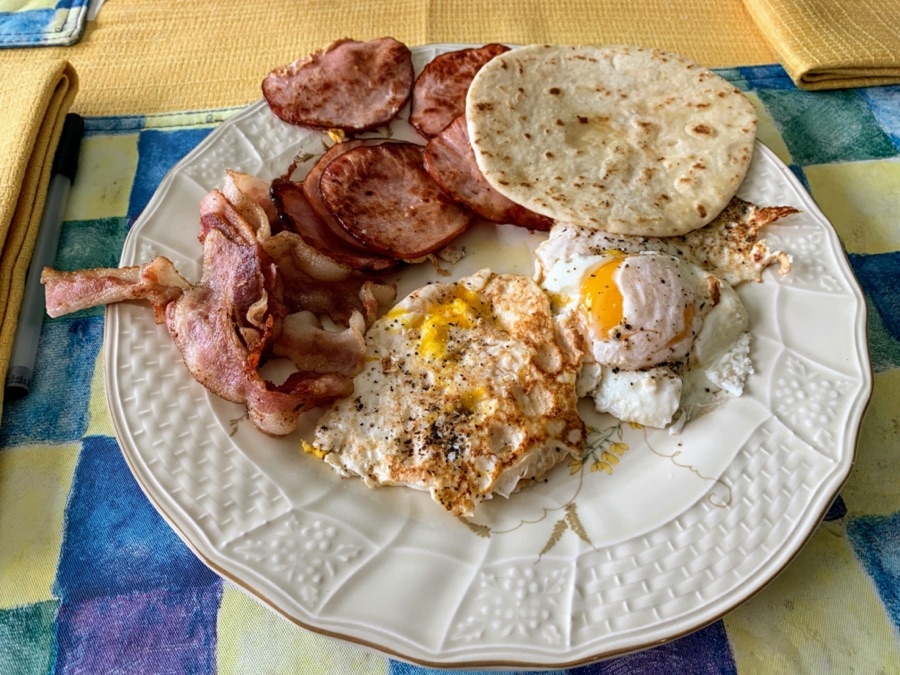 Must start the day with a full tummy!

The rest of the day, I worked on several plugs around the house, making sure everything was OK for next week.

I put together and stuffed my new Rubbermaid storage locker.  I wanted to get the liquids off my inside storage racks and outside of the garage proper.  The new storage container was a perfect solution, and I already own two of them, so I know they are high quality and last a long time. 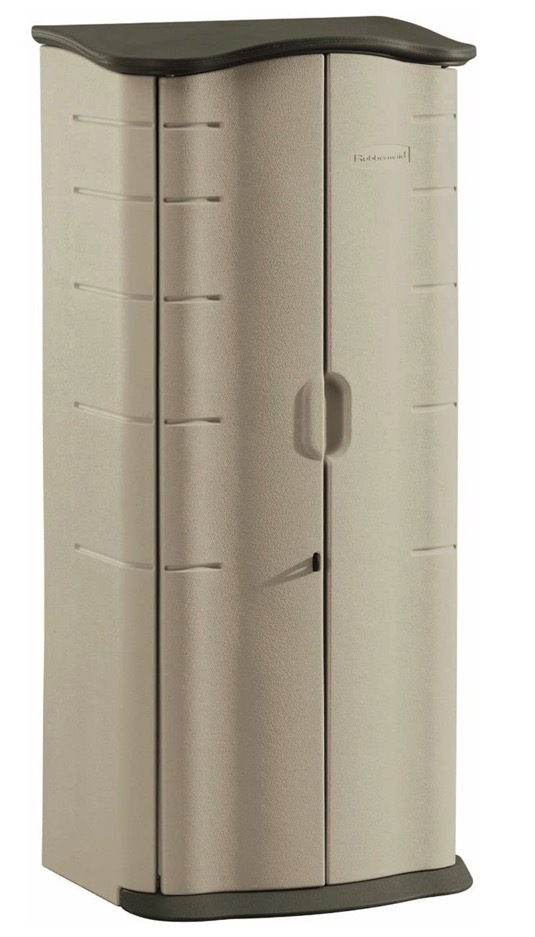 Its tummy is full as of this afternoon!

It is 4:00 PM, and the shower is calling for I am going out to dinner this evening with friends.  I got out of the shower at 4:20 PM and was worried about getting there on time as dinner was 4:30 PM.  I hurried my little 191-pound body as fast as it would go.  I made it just in the nick of time (OK, here is the secret, I am dining in Vicky’s nation with friends and Vicky is next door!) 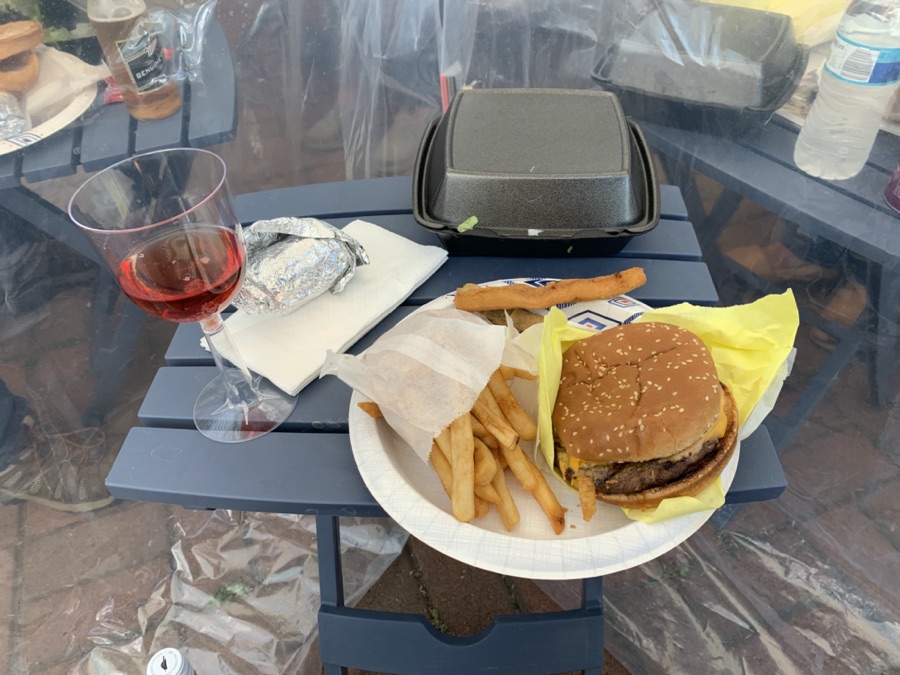 Dinner is served next door.

Yes, I provided the fresh corn. 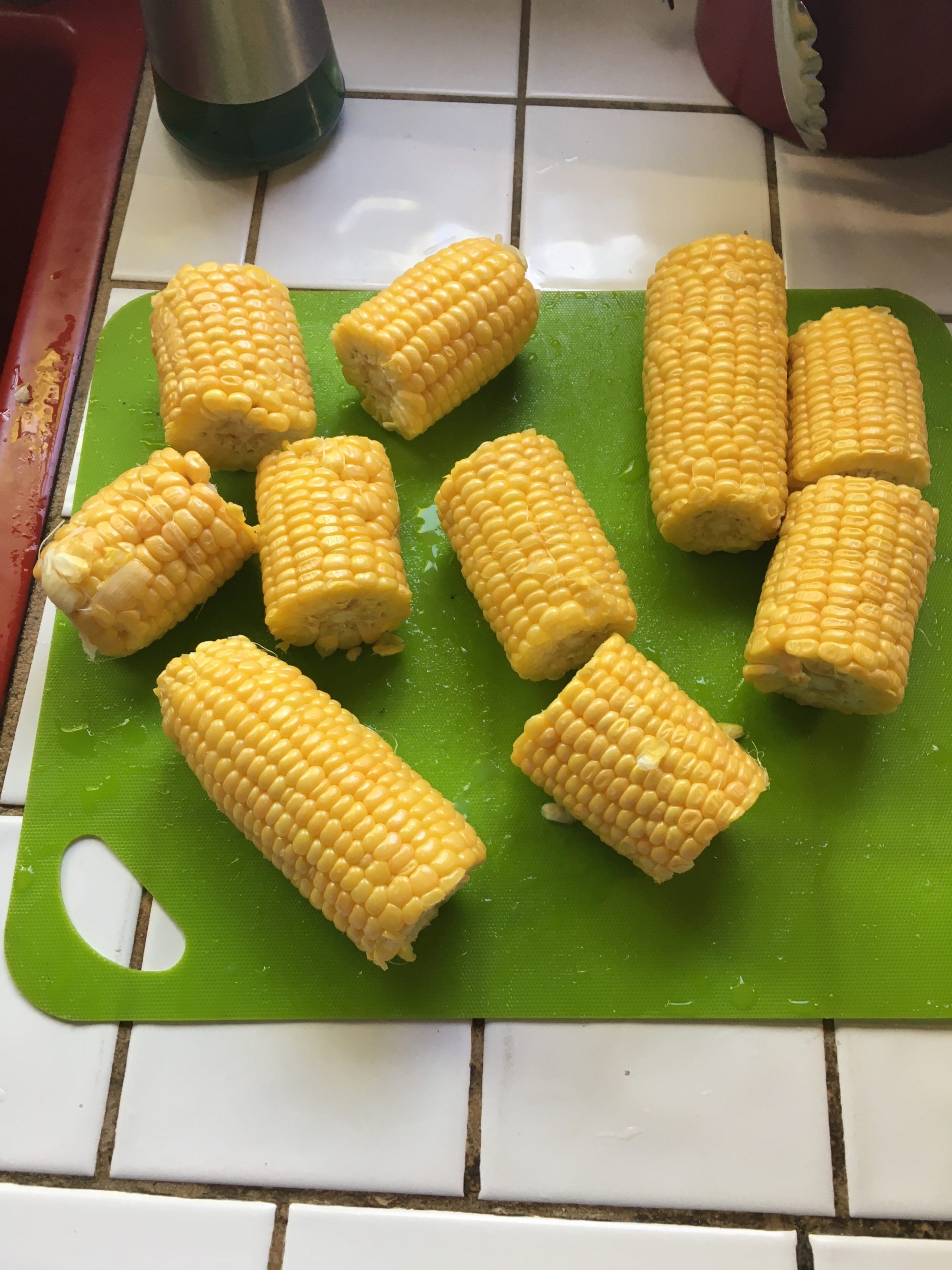 Korn on the kob!

We all talked for three solid hours about everything.  Below is Ed, who lost his wife just nine days before Sue passed.  He and I share a lot of feelings and talk quite often.  Ed is a good guy and offered to be my wingman when we go to the Elks for a dance.

You have no idea what the ladies do when a widower shows up at a dance.  Nothing “romantic,” but they want to dance, dance, and dance some more. 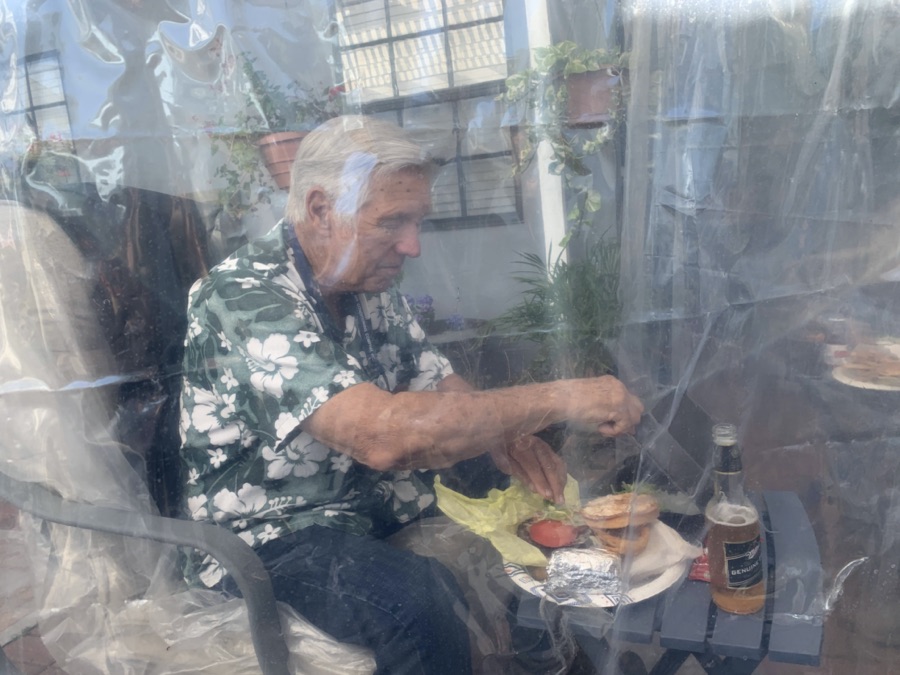 My view through the shower curtain was difficult at best.

Vicky, as expected, was a wonderful hostess, and we have a “Paul’s Place” hamburger and “Paul’s Garden (me)” corn on the cob.  It was BYOB, so I brought a bottle of Sue’s wine and enjoyed the afternoon sharing in all the laughing and giggle.

Not shown is Irene, who was three layers of shower curtains away, and her picture was unrecognizable.  Irene was there for sure. 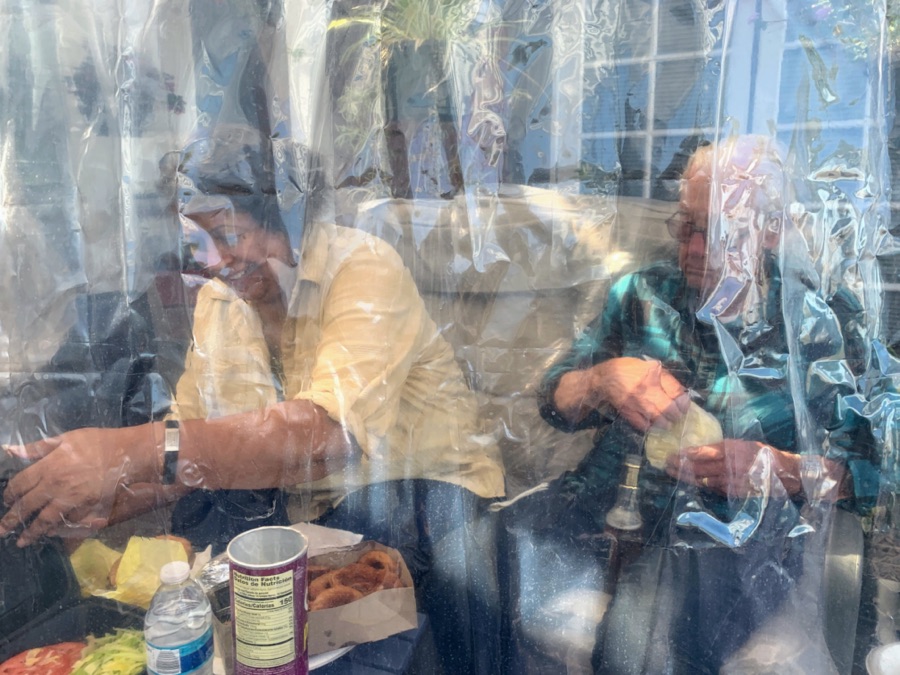 They are generally not fuzzy.

We all talked about dogs, and I thought of Sue’s herd of Chi-Wiggles.  If I were to get a dog, and I am not sure yet, it just might be another Chihuahua as I loved our pack so much! Would it be fair as I am 75, and that would mean he poor little feller would have to put up with for fifteen years?

When I think about getting a dog, this cartoon comes to mind.

After the long journey home, somewhere in the neighborhood of 75 steps, I decided to listen to the news.  After the Aunt Jemima (Helen Green)  debacle, I turned it off.  OMG, this land is going goofy.  Here is a lady who was born a slave, worked hard, had a great mind, became well to do because of hard work, and now the looney-left wants to dishonor her legacy because she chose to be a “stereotype.”

Hells bells, we need a lot more like her around.  Her career allowed Green financial freedom to become an activist and engage in antipoverty programs.  She was one of the first African-American missionary workers. She used her stature as a spokesperson to become a leading advocate against poverty and in favor of equal rights for individuals in Chicago. 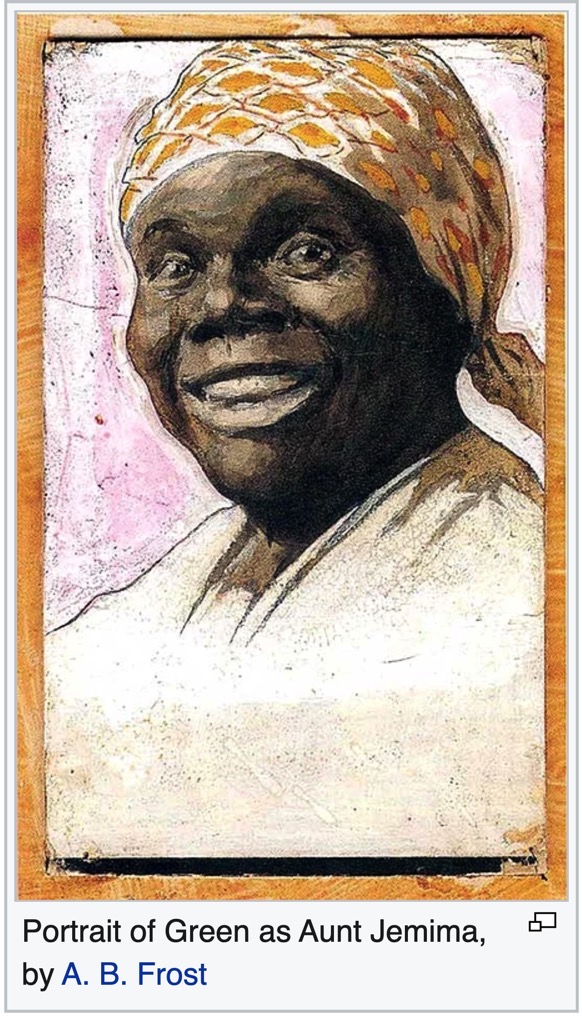 Thank you for all the excellent work you were able to do.

General Mills, you ought to be ashamed of yourselves.  I am going to sell my stock in them tomorrow morning. 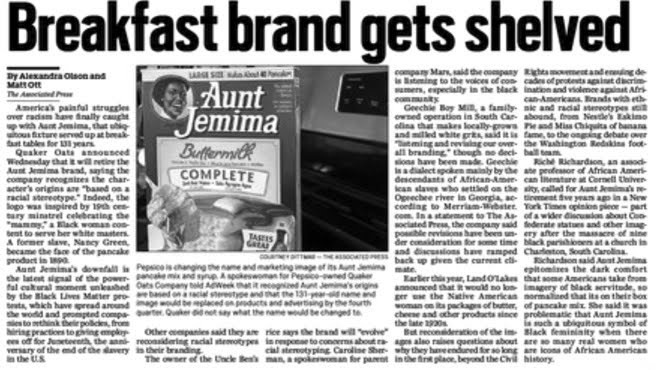 The world has gone crazy.

I crashed at 10:30 PM after a long day, and tomorrow we start again in the bathroom, and I complete the garage and wiring work.

On my way to bed, I checked, 6,048 steps today for a total of 2.1 miles.  These steps were just around the house when I had the phone in my pocket.

Just an old retired guy trying to finish out my last years on this planet loving my best friend and wife, having fun, learning, and passing on helpful things to others.
View all posts by Paul →
This entry was posted in Cooking, Dining Out, Food and Wine, Friends, Working Around House. Bookmark the permalink.
Powered by Maribol IMDB Plugin