Back To Being The Social Butterfly!

Everyone knew that Sue did not like the cold and hated the snow, but once a year, she would relent and take me to the top of the world on the Palm Springs Aerial Tramway.  It was a win-win situation.  She got to be 8500 feet in the sky, and I got to see the snow!  We both got dressed in our warmest outfit, and we headed up the canyon.  Below the picture is from several years ago, and it was late in the season.

Sue laughed and said’ “Hey, I took you to the snow?”  I looked around for a pile of snow to build a snowman!  We were with the Finch’s on this trip and we celebrated the “snow-dwarf” by having a bottle of champagne while dining in the mile-high restaurant.  Wherever we were, we were there enjoying each other’s companionship.  I miss you every moment of every day! 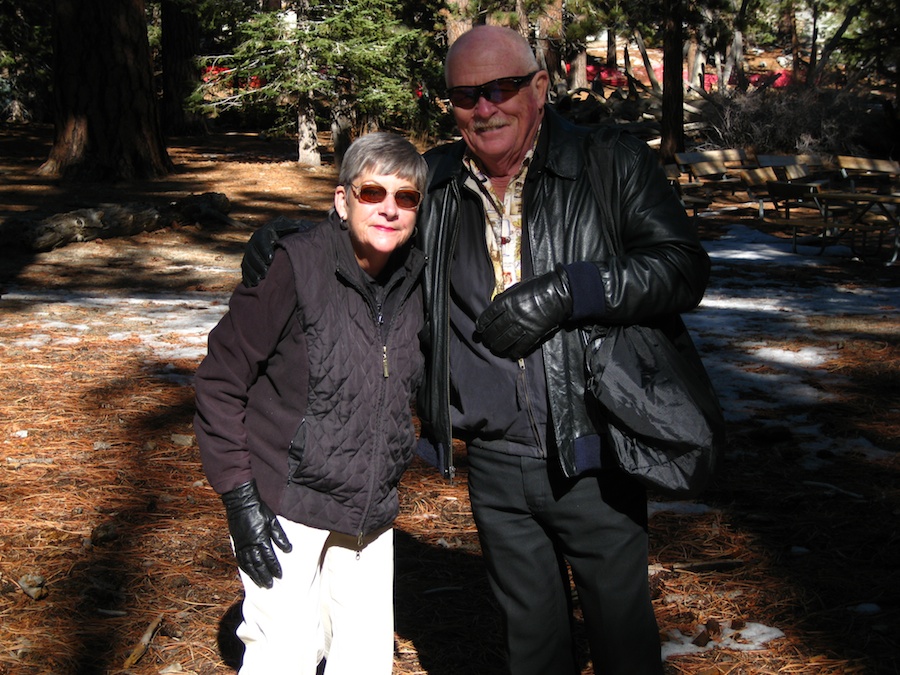 In the cold! She was a real trooper!

Sue spotted a pile of snow and went about creating her masterpiece. 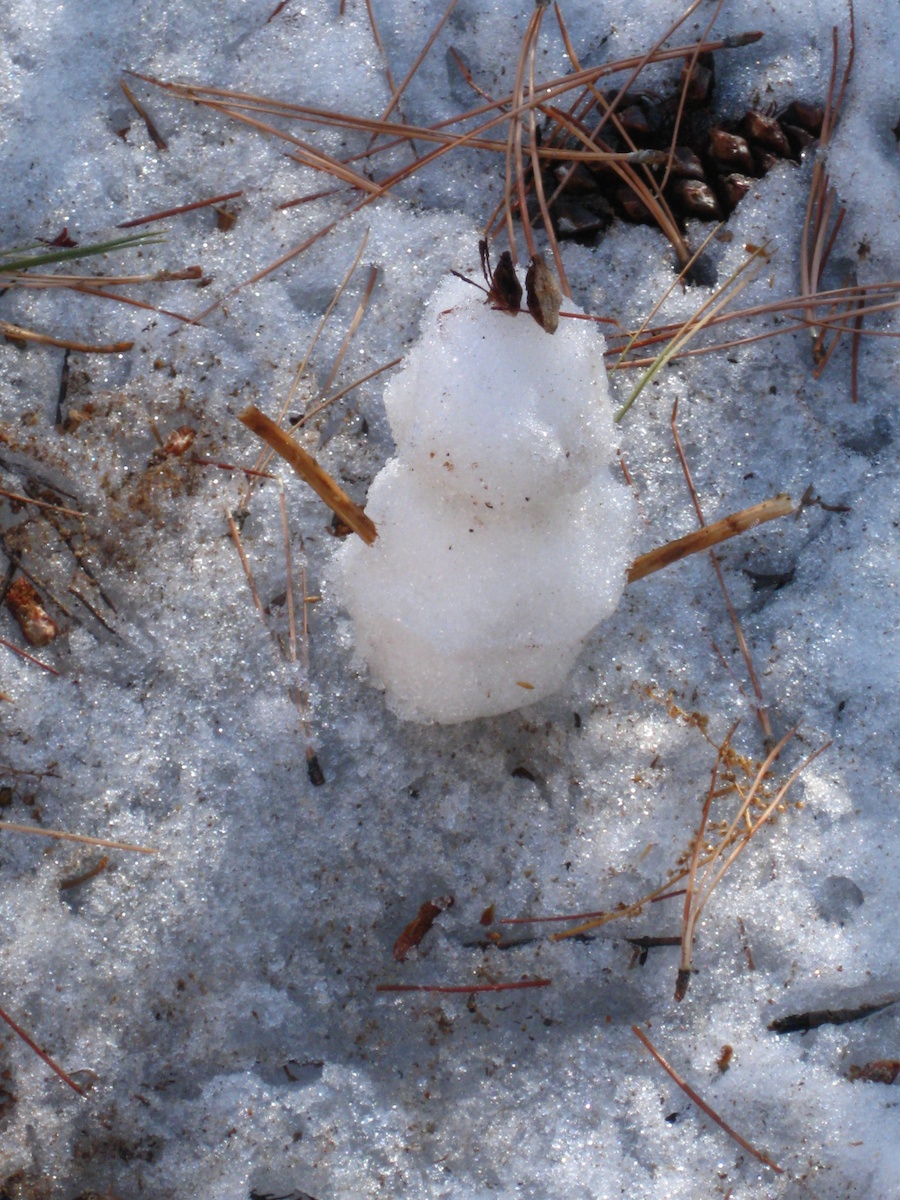 You guessed it, Sue built me a little snowman (I called it a snow-dwarf).

By 6:00 AM, I was upright and partially functional as demonstrated by my ability to drink a cup of coffee.  The friendly bathroom scale put me at 195 pounds this morning, well, more correctly, 195.8 pounds. Only six more pesky pounds to go before I declare victory and perhaps even set another goal!

Friends were scheduled over at 3:00 PM so planning the day was essential.  Sue, who worried anytime we were having guests, taught me all the proper things to do to be ready.  Two trips to the market just to make sure I had beer, ice, wine, strawberries, etc. 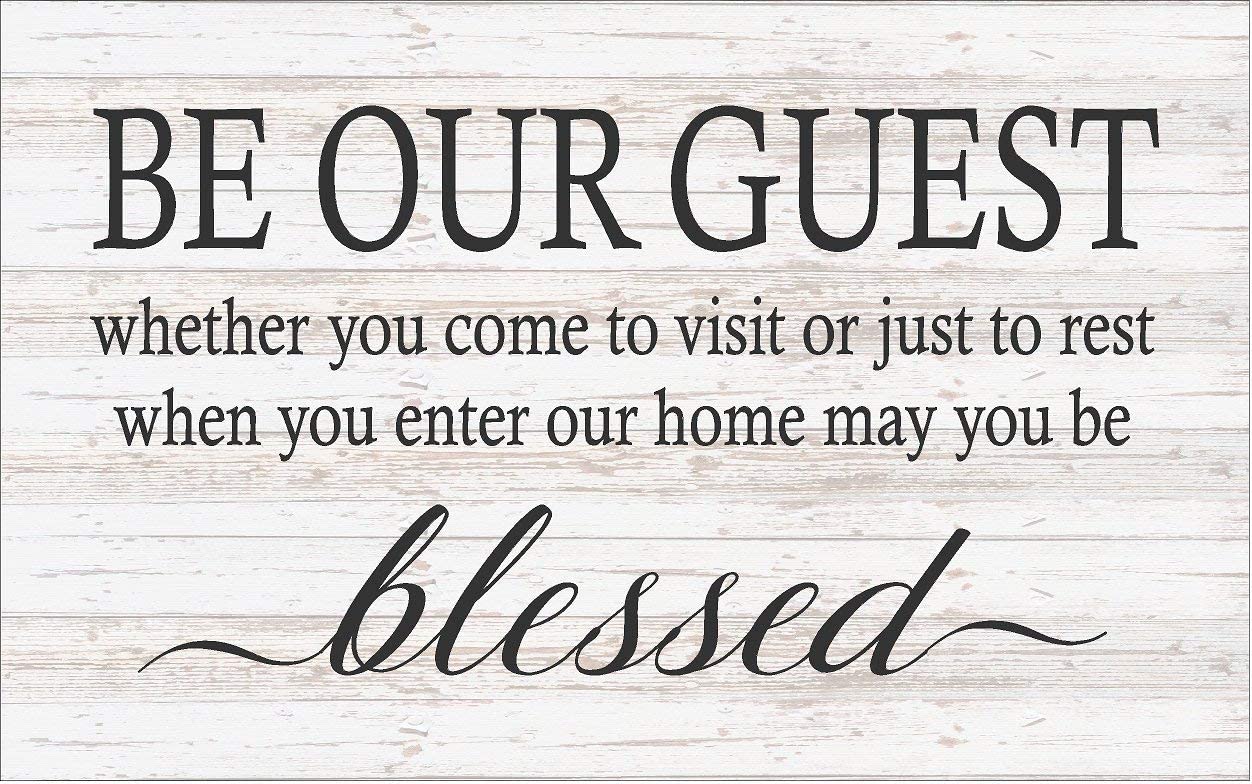 Based on my new weight, I decided lunch was OK so I whipped up some Chili Verde which is a green chili made with tender pork shoulder that has been seasoned and seared, then cooked low and slow in a rich “Verde sauce”, or “green sauce”.   I used the Instapot so I could be done in 30 minutes as I was busy.  I had some Verde sauce that Domilita, my housekeeper, gave me so I was ready to roll.  The result was terrific and probably only about 500 calories.  I got the limes directly off my own tree.  Hot stuff! 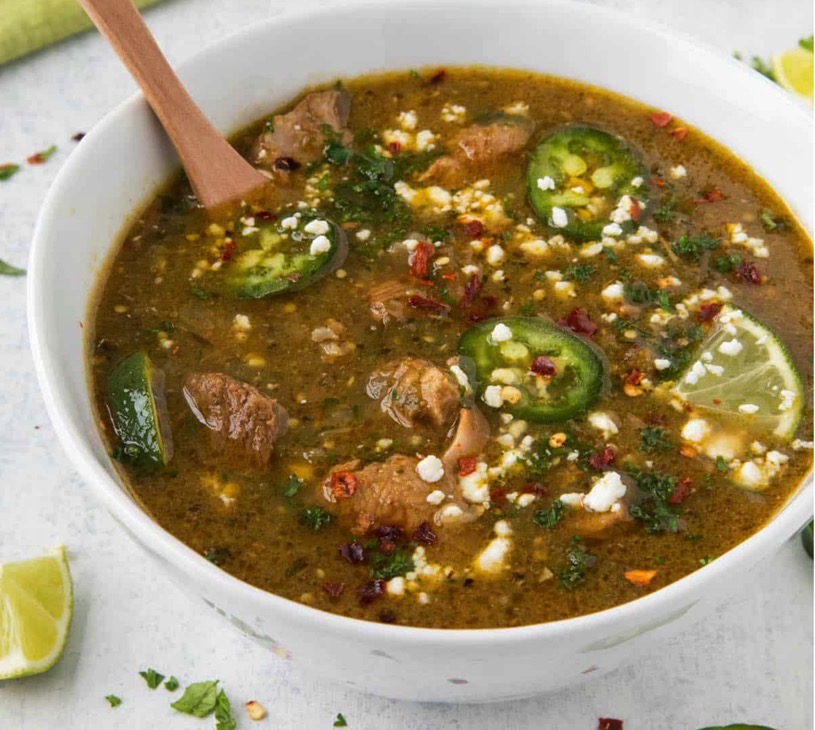 I did not remove the jalapeno seeds in the mix as I like it spicy!

The time is now 2:45 PM so time to do a double-check.  Mike showed up first followed by Irene.  Sam and Brenda went directly to Vicky’s.  So we went between houses so we could keep our separation. 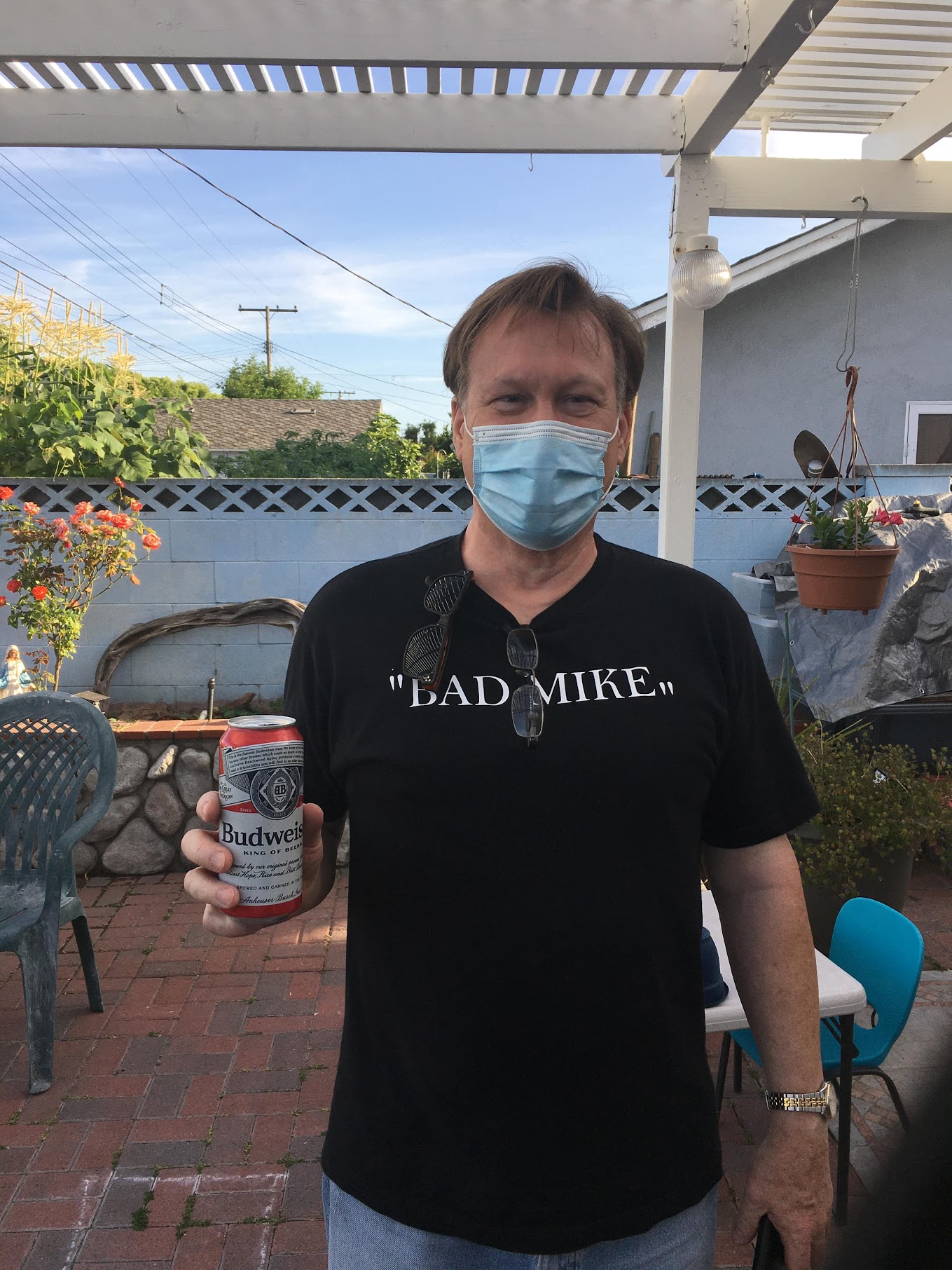 The Budweiser was my idea but it seemed to work fine. Mike did not notice I transfer another two pounds to him while he was visiting!

The picture below is taken from my side of the fence.  All six were busy visiting. Del was the one we were all worried about since he is our most senior (and loved) member of the group!  He sat there and took all the visiting in rewarding us with several excellent “zingers”. 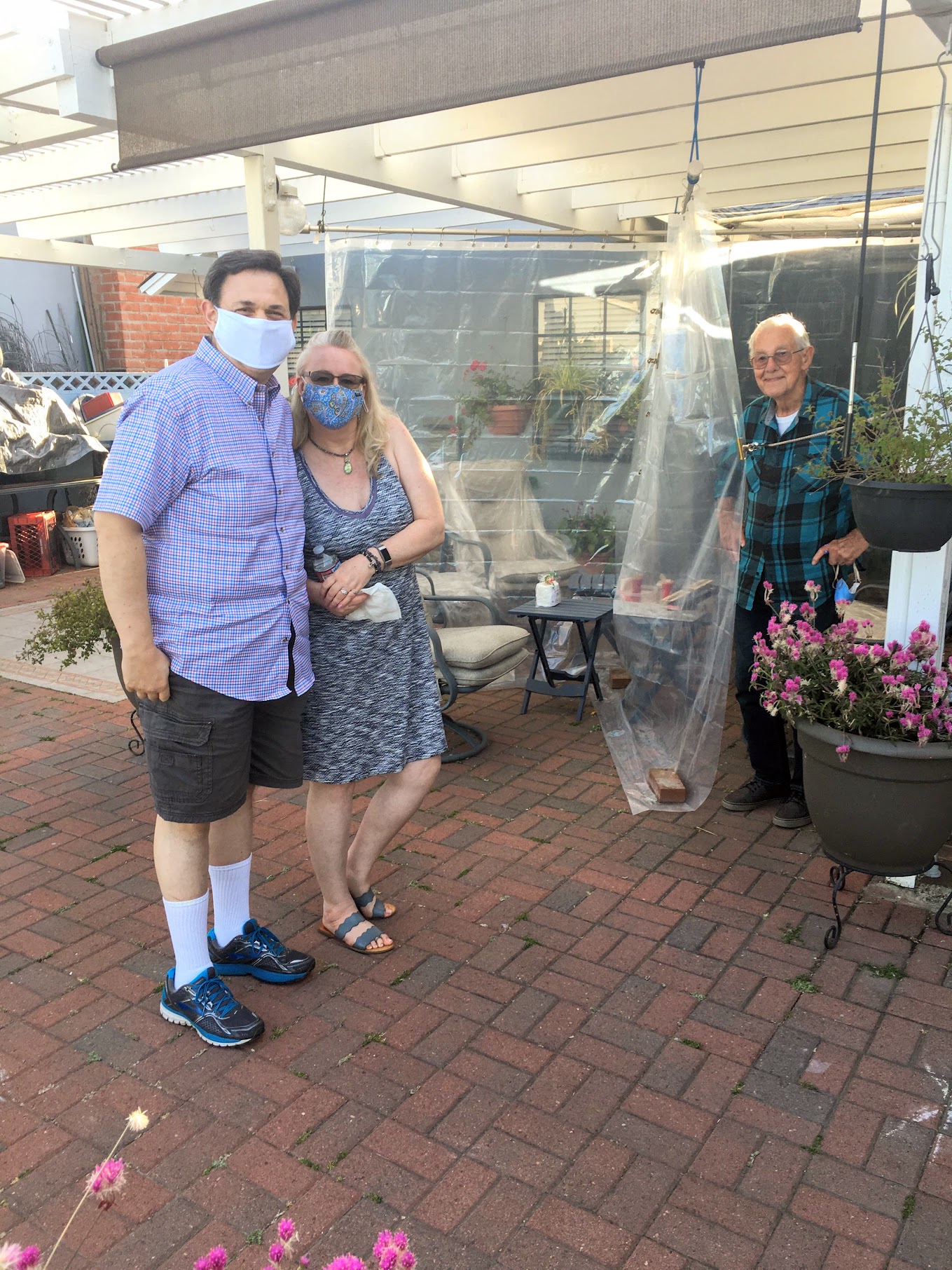 We sat at Vicky’s most of the time as that was were Del was located.  It was nice and shady.  I was told NOT to bring my shower brush and soap because no one volunteered to hold the hose for me, I can’t understand why! 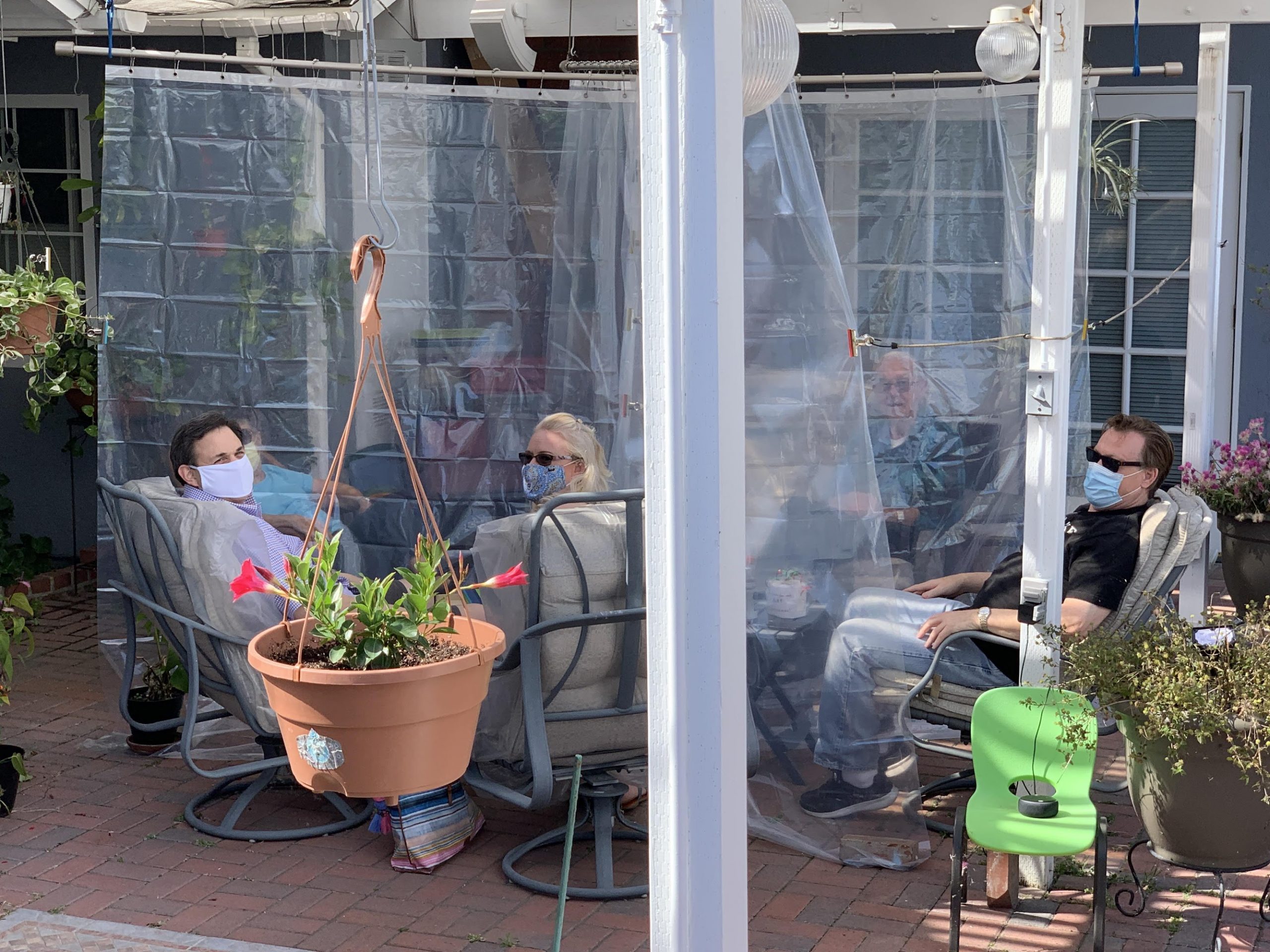 No laughing, it works. Vicky has four quadrants to four families can visit!

Vicky’s invention was working quite well! We could talk and see each other and know that Del was protected from the virus by the curtain. 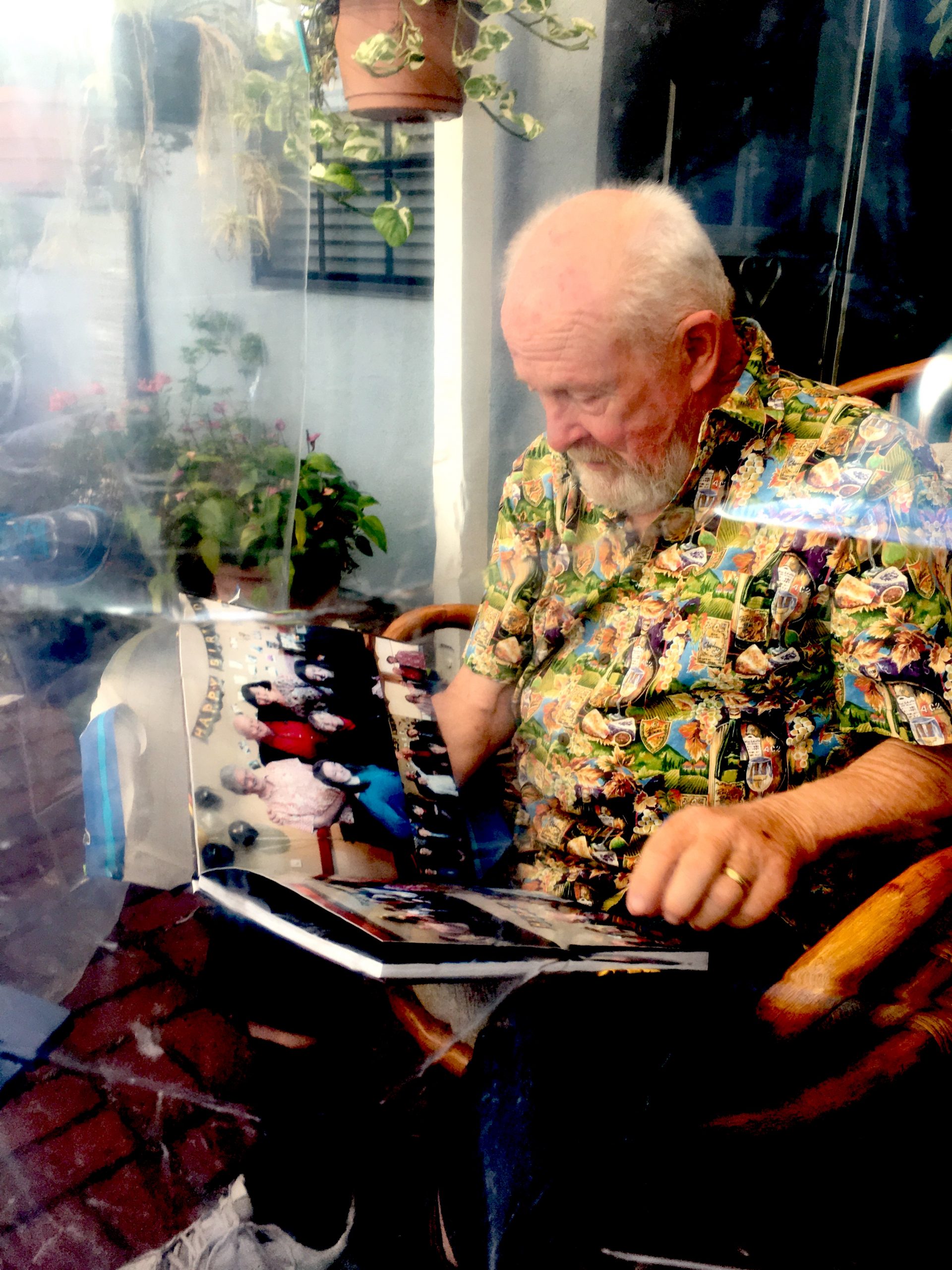 It was nice to be able to sit next to our friends and be safe behind the shower curtains!

Vicky whipped up some meatballs and cleverly placed them in Chinese food cartons so everyone had their own separate meal.  Mike brought his and my snacks to the Liles’ patio and we sat in the front visiting most of the afternoon.

The older we get the less alcohol we consume.  All afternoon, I had one beer.  The rest of the time was diet Coke and light cranberry juice. OMG, I am a teetotaler?  On a serious note, it would be easy to drink too much being alone and missing my wife.  So, on one of my many conversations with Sue, I promised NOT to drink other than some social situations and then, in extreme moderation.  Oh, BTW, I had the same promise to my bathroom scale. 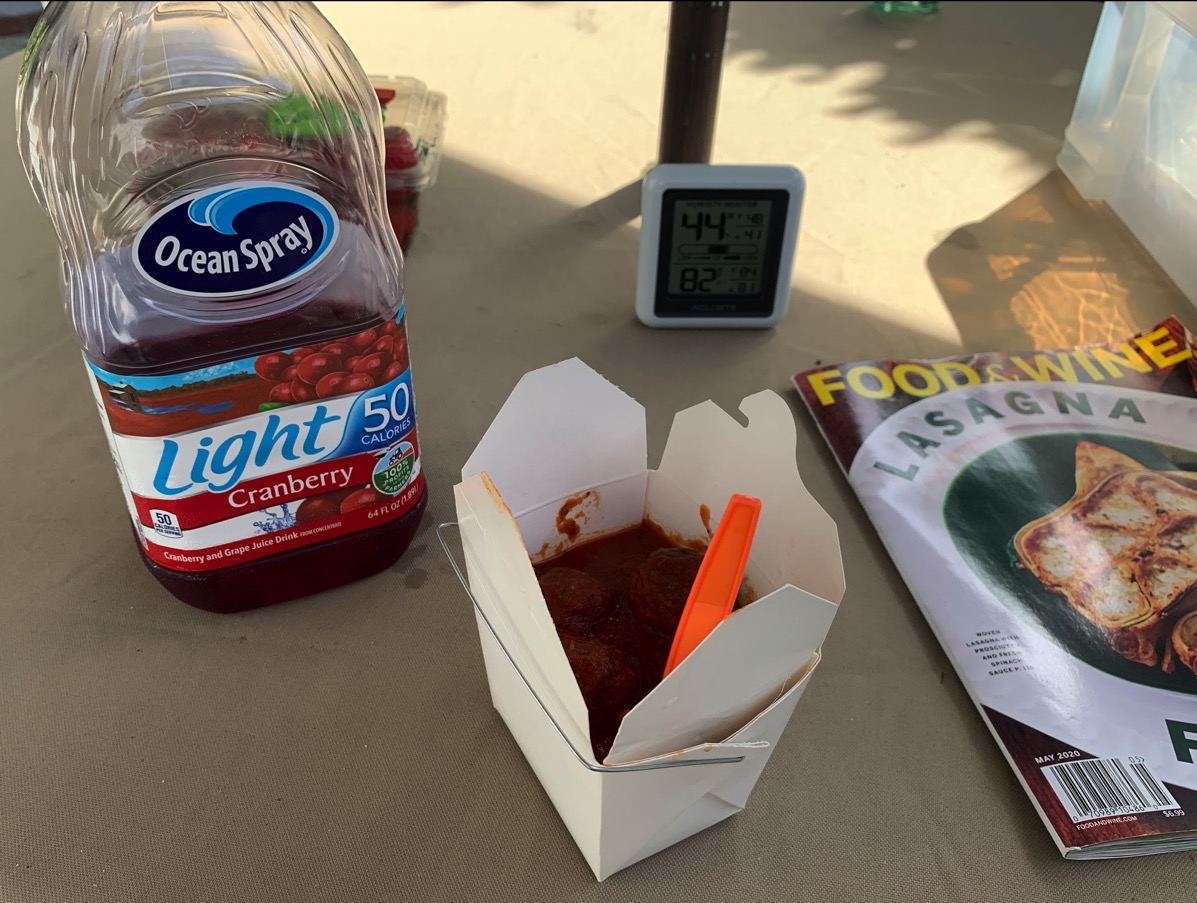 The meatballs were excellent – Thank you, Miss Vicky!

At 6:00 PM, I went inside and placed my daily call to Colleen to check up on her.  I showed her the MAGNIFICENT birthday present Sam and Brenda got me but I will not reveal it here as I want to surprise Robin first.  I shared the gift with Colleen (I can’t keep anything from her) and she promised not to tell anyone about it.

When Sam and Brenda gave it to me I cried but thanks to floppy sleeves, I mopped up most of “the rain” before anyone saw what was going on.  THANK YOU SAM AND BRENDA!!!!! You all will get to see this wonderful gift as soon as Robin does!

Our dear guests and friends departed so I cleaned up which amounted to five minutes and that was mostly putting the covers on the chairs.  Going inside, the sound of a woodpecker filled the room. Great, now what can be done?  Upon further investigation, it was Mr. Duck.  He and the Mrs. were at the back door knocking either a) to come in or b) asking for a handout! 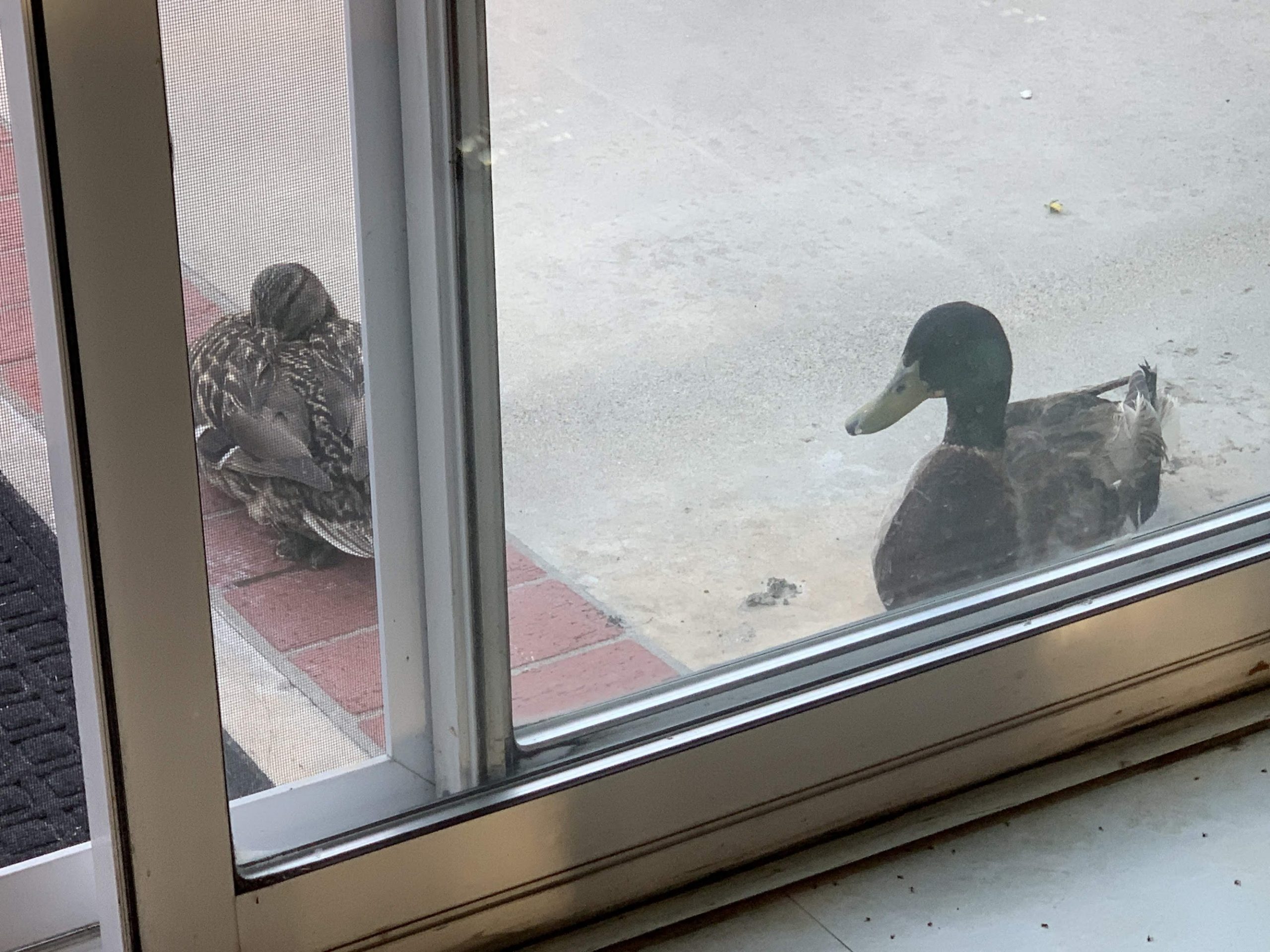 “Hey Fat Boy, how’s about sharing some of your dinner with us poor ducks?”

Should I walk tonight?  Obviously, the answer should have been yes but I decided to just rest and watch the boob-tube.  I bing-watched “Being Erica” and by 10:00 PM the eyes were getting heavy and I crashed.  It’s been a glorious day getting to spend time with our friends, talk about dancing, and making plans for the very next dance activity.

Tomorrow we expect the Branders along with Marianne and Craig plus the Z’s and hopefully Ed to join us.  Such a social butterfly I am becoming!  Actually, people just want to get out and see other folks and our home seems to be a good visiting location!  Thank you, Vicky, for the porta-isolation-booths. Thank you, Sue, for the training on how to be a good host!

During the week, I am going to attempt to get Iris and Will over for a visit.  I miss seeing them a lot.

Here is a little something for you all to listen to.  It takes about three and a half minutes but worth listening to!

Just an old retired guy trying to finish out my last years on this planet loving my best friend and wife, having fun, learning, and passing on helpful things to others.
View all posts by Paul →
This entry was posted in Cooking, Friends. Bookmark the permalink.

1 Response to Back To Being The Social Butterfly!