Sunday Has Arriven! Time To Visit!

Your life was a blessing, your memory a treasure, you are loved beyond words, and missed beyond measure!

If life handed her lemons, she made lemonade.  We were planning to go to Catalina today, but after waiting on the dock for almost an hour, we found out the boat’s engines had gone kaput.  What to do?  Without hesitation, Sue said, “Into the cars, we are heading to George’s Greek Cafe,” and we had a superb lunch with Mike, Irene, Ghislaine, and Wally.  Sue was always positive, making life such a joy!  Even in her last days, she was positive, not complaining, just “Sue”.  There are days I wonder if I can keep going without her gentle nudges in the right rib-cage (inside joke).  I love you, sweetheart! 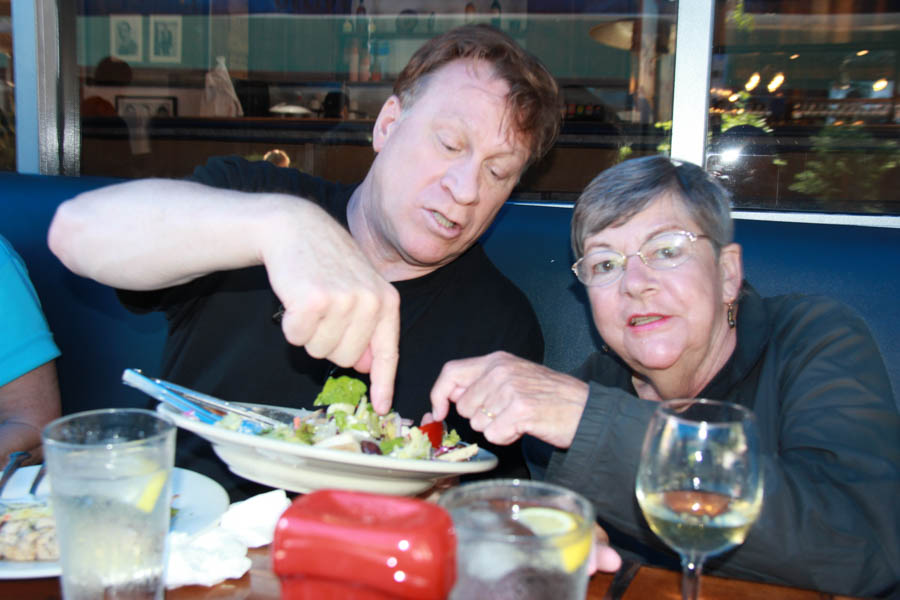 Up at 6:00 AM and ready to face the day, but first, I make the trek to the lying machine (commonly called the bathroom scale).  Today he pronounced 194.8 pounds! Wow!  I did my morning cup of coffee, walked around the house doing my inspection, and then had breakfast, which consisted of a vegetarian tamale.

I read the newspaper this morning and found a couple of goodies to share!

For those of you who always listen to CNN!

Oh dear, the dino’s will now be complaining!

Probably something I would have said at work only I would NOT report myself, I’d laugh and giggle!

I called Colleen to check-in, and while talking, I remembered she sent me current pictures of my two GREAT grandbabies, Logann and Calhan!  Yes, I am a great grandfather.  A good looking group, if I don’t say so myself.  I get to talk to them 2-3 times a week, and they call me Grand Pop-Pop!  I am beginning to understand Logann and Calhan is just a lot of fun (but I am glad they stay with Colleen and not me, they have way too much energy). 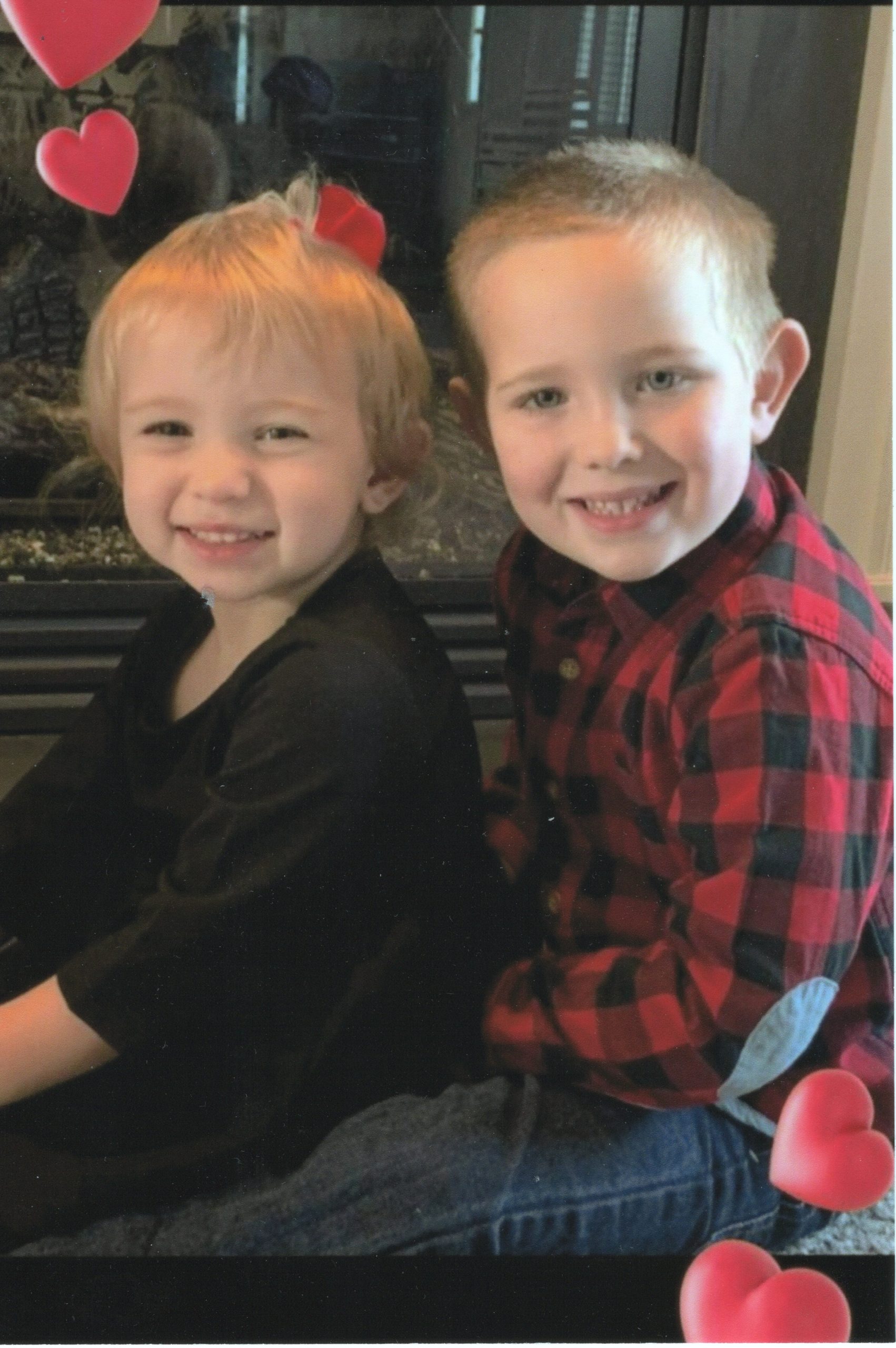 To the market, as I needed a few minor things like Saran Wrap and two birthday cards.  It was a quick trip taking all of about 15 minutes. As soon as I got home, I started a loaf of bread. I decided to go with my standard recipe, but I put in extra sharp cheddar cheese.  Today, I’m going to turn up the heat to 425° to see if I can improve the crust.

I whipped up a vegetarian tamale for a quick lunch.  I knew Vicky was going to be serving some goodies at her place so I ate lightly.  I hope it pays off tomorrow morning when I face the “lying machine”.

I quickly set up the front patio for guests, washed down, and then jumped in the shower. We started the visit at my house as Vicky’s grandbabies were napping.  When they came up for air, Vickey texted me, and we went into the maze, and all of us visited.

Craig and I had a strawberry margarita, which is an excellent drink on a warm afternoon.  It was precisely 82 degrees under the umbrella, but we had the ocean breeze.  I love living near the beach.  Craig and I are assisting the U.S. in being the number one tequila market—larger and more important than Mexico. 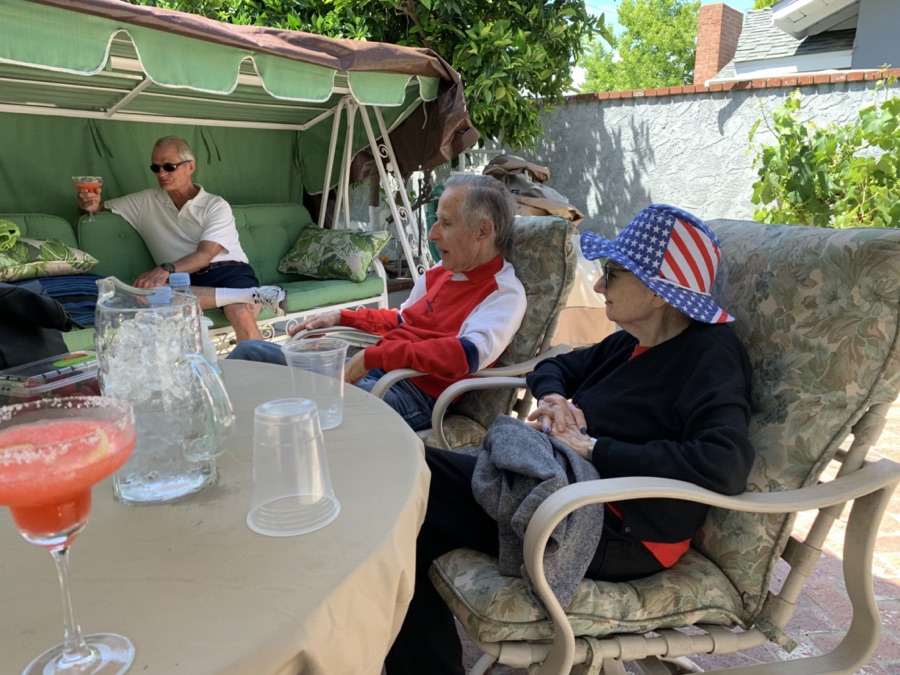 We were just visiting and swapping stories.

Vicky texted her grandbabies were awake, so we all wandered over next door.  We entered “The Maze,” which is a Vicky-designed four separate compartment visiting booth!  The four areas are all separated by a floor-to-ceiling heavyweight shower curtain.  NO germs are going to get through these puppies!

Marianne was conducting interviews finding out about people; I thought it quite entertaining.  We know these people quite well, but still, we find out things like Marcia being in the mathematics branch of a medical research company before starting her family and Vicky dining on cooked calf’s heads. 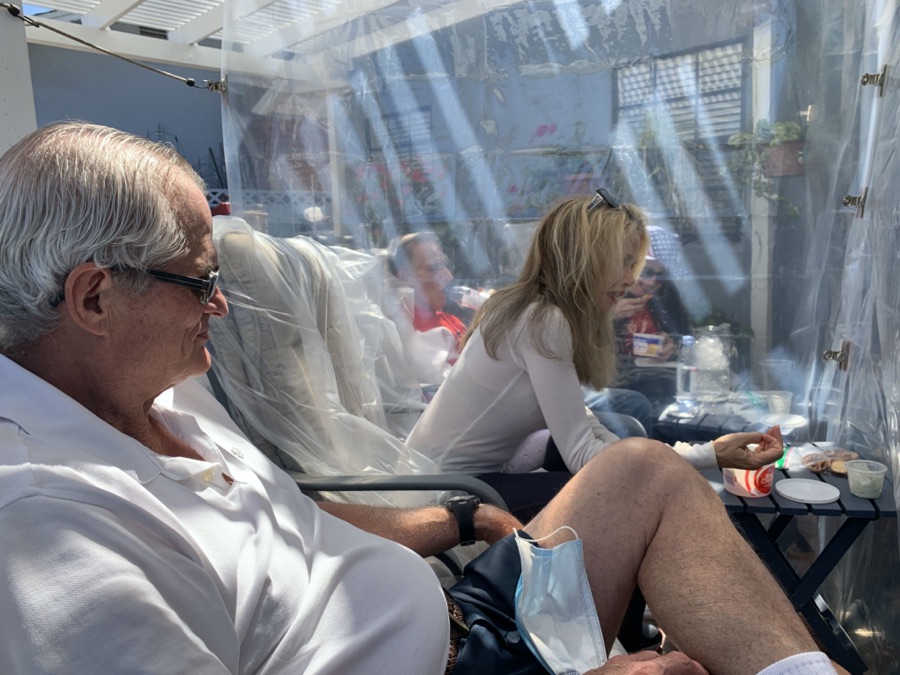 Behind the shower curtain, Crag and Marianne visit with everyone.

You can’t see Ed Roberts but he is in the corner (not wearing a dunce cap this time) listening in and sharing stories.

Vicky took pictures moving people to the yard so they would not be seen through the plastic.  Ed was with us today, but he stayed put in his private cubicle. 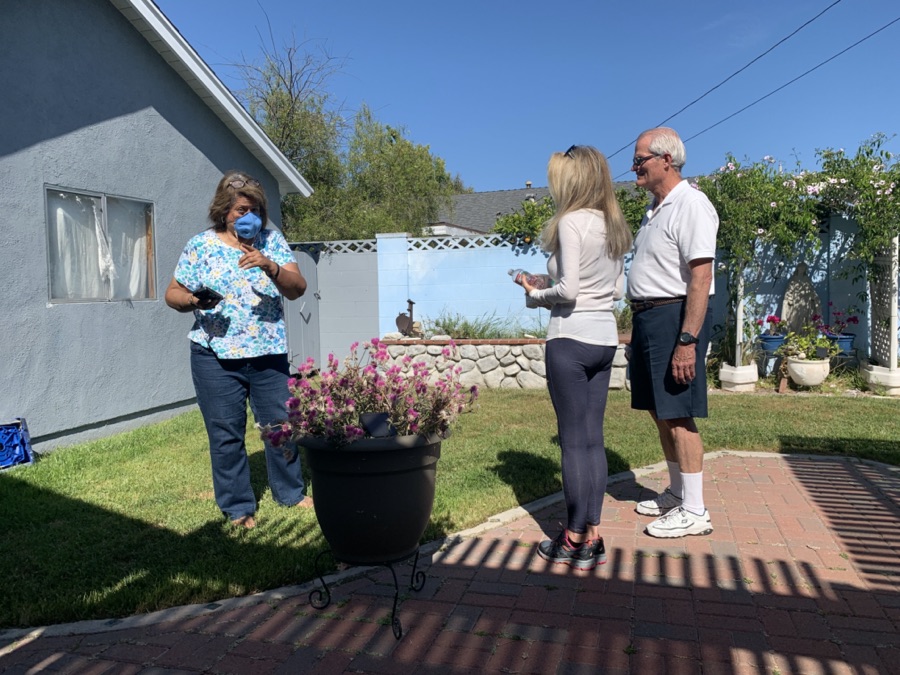 We chattered until almost 4:00 PM, a pleasant visit.

Time for a walk, so I started north and stopped as I saw that some of my artichokes have gone to flowers.  I was not fast enough, so I will pick the remainders today and cook them up in the Instapot. 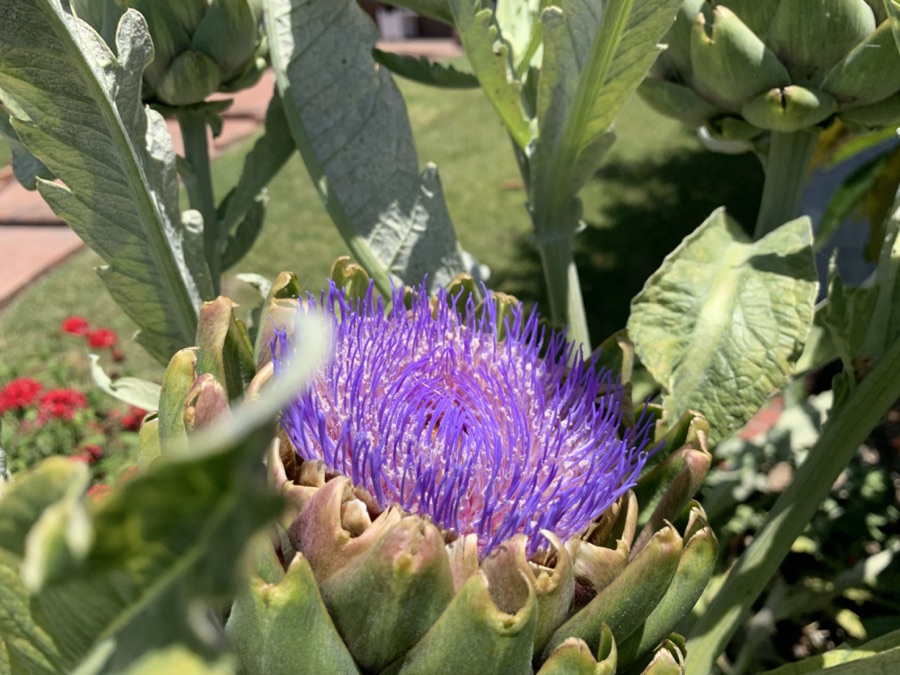 Artichoke Fun Facts: The globe artichoke (Cynara cardunculus var. scolymus) is a variety of a species of thistle cultivated as a food. The edible portion of the plant consists of the flower buds before the flowers come into bloom.

The walk continues heading north for a two-mile stroll!  The two miles added to the morning’s activities giving me close to 10,000 steps today!   I must keep moving as the weight keeps dropping off. 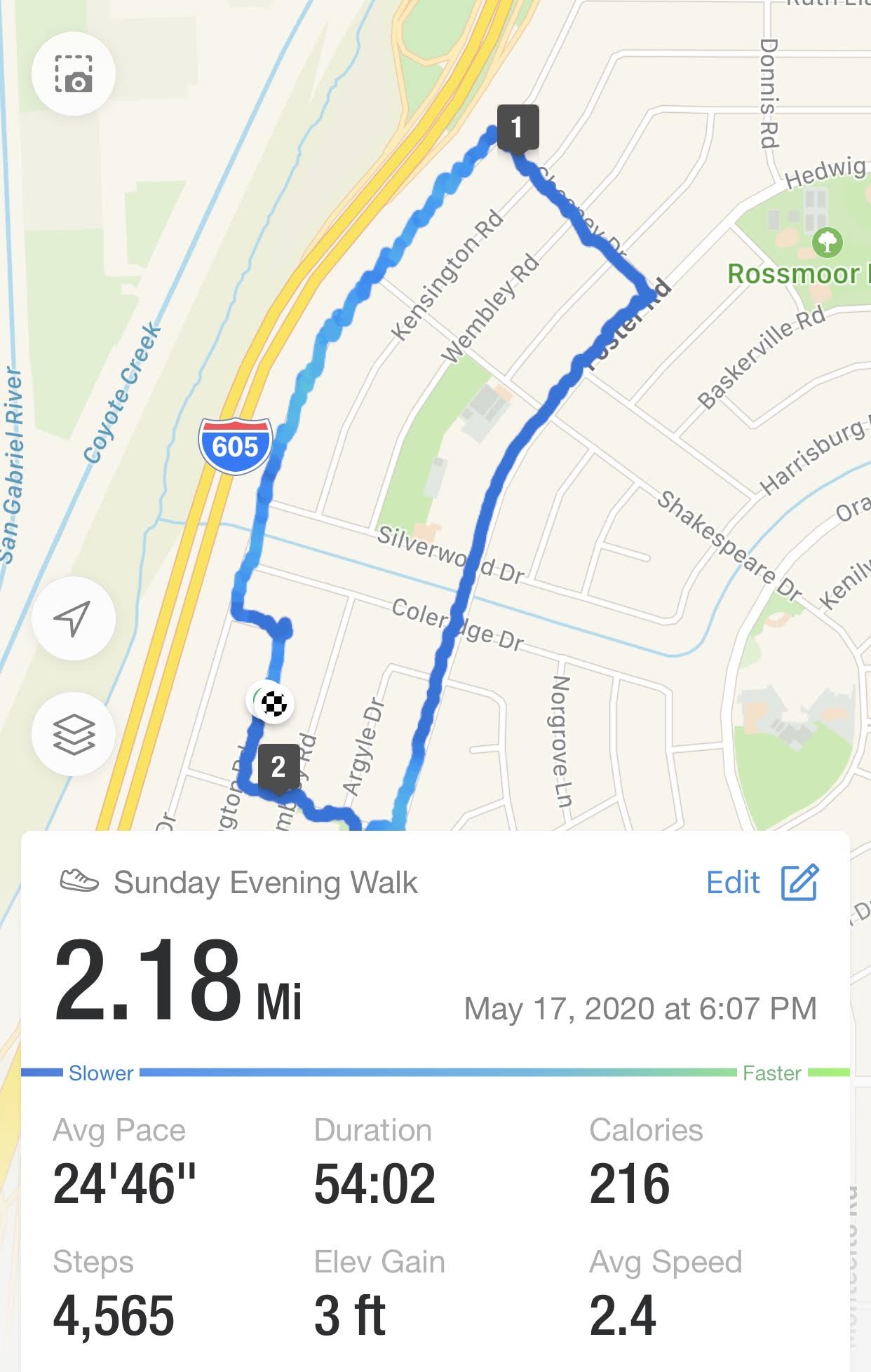 I almost got lazy and didn’t do it, but I saw visions of certain people wagging their fingers at me so off I went in a cloud of dust!

I got home about seven and called Lee for a quick chat.  I told her about my latest series, “Being Erica” so Lee is going to try it.  Tonight it moves into season two.

One final check of the email/messages and I got a nice surprise.  I know it is hard to read but Robin sent over Nick’s journal for the 4th grade where he was writing about Grandma Sue and Papa Paul. 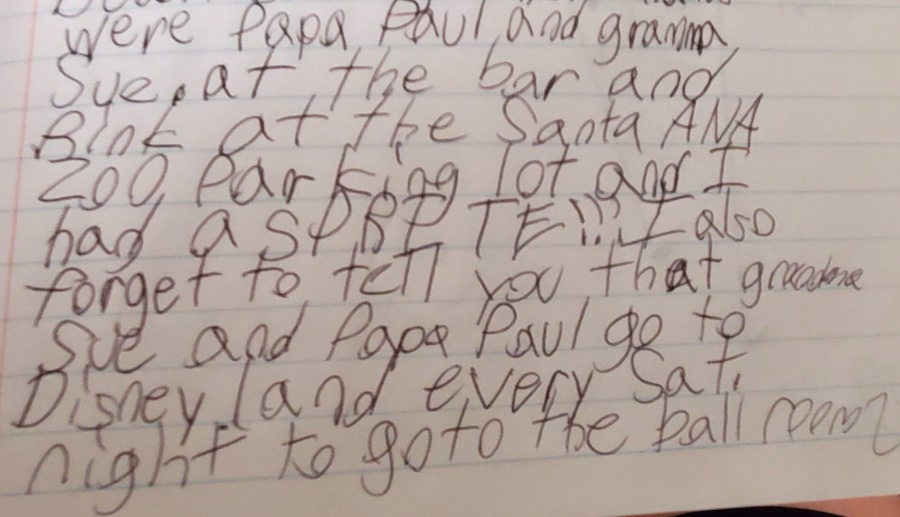 He knew we went dancing at Disneyland on Saturdays and we go to ballrooms to dance!  How sweet and he is still a good kid even though this year he will be twenty-one!

I crashed early after a few chores like removing the diving board form the pool as I am getting a “virtual house inspection” tomorrow at 11:00 AM with the new insurance company.  Diving boards are taboo, Ed Robert’s confirmed that with me when we spoke a little earlier.

Ed remarked, during our phone call, that yesterday’s diary post made him sad in a good way.  He like the video’s about “growing old”. Ed and I know how each other feel at this time of our life losing our best friends within days of each other. I was so happy to know Ed was getting memories from my website!  The picture below was from 2011 while we were dancing at the Newport Elks.  We had great fun together! 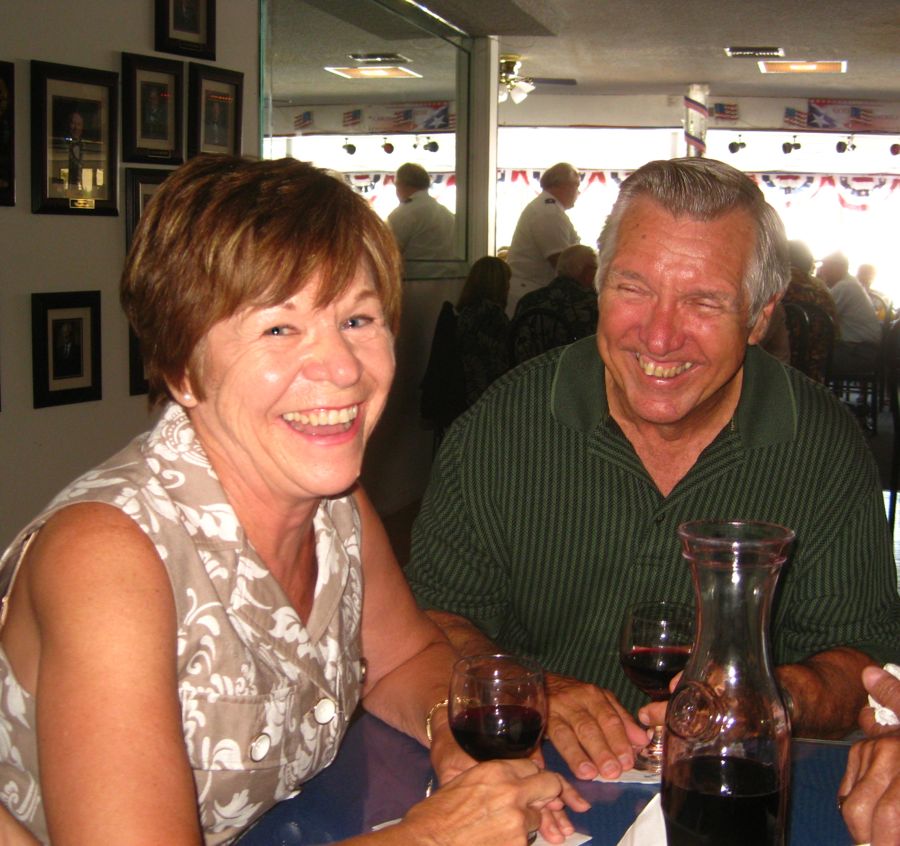 Kathy and Ed at the Newport Elks on one of our many Sunday afternoons dining and dancing.

I watched a little TV and then crashed at 10:00 PM.  It was a good day with friends.

Something for you “oldies and goodies”.  Take a listen and remember the 1950s and get ready to dance real soon!

Just an old retired guy trying to finish out my last years on this planet loving my best friend and wife, having fun, learning, and passing on helpful things to others.
View all posts by Paul →
This entry was posted in Friends, Walking. Bookmark the permalink.