Saturday Has Arrived And We Are Ready!

There comes a time in our lives when the idea of going out on a Saturday night seems more trouble than it is worth. 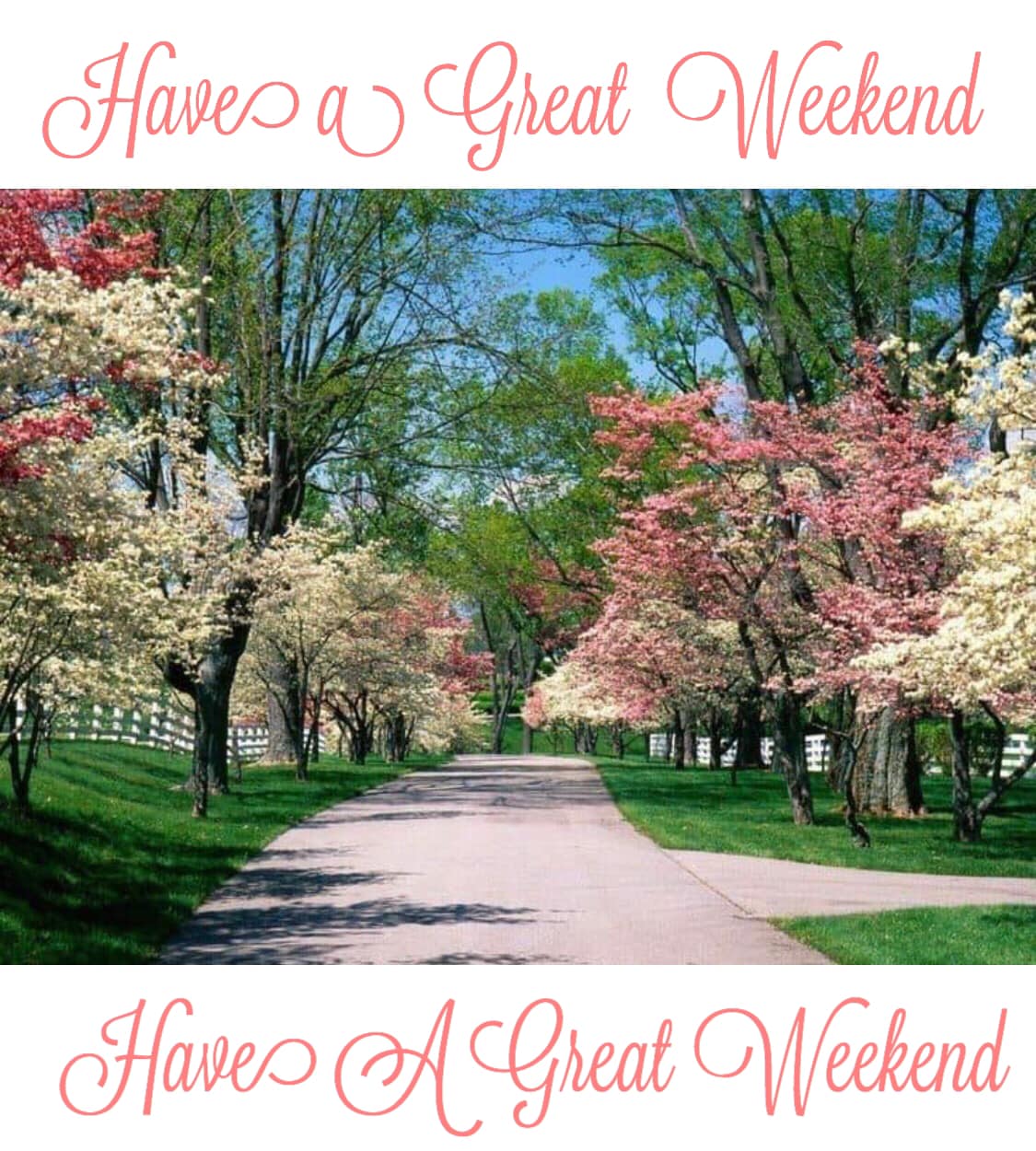 Yesterday I trimmed the southside trees, and this morning I examined my handy-word only to find a lot of fig stains on the beautiful grey wall. The blots were from fruit that ripened on the tree, and I did not see or could not get too. The”fig guts” oozed onto the wall and turned into black streaks.

Getting the right color paint to cover the mess is a job for “Paint Lady!” This attractive middle-aged lady has been in the paint department at the local hardware for approximately 100 years. When I need help, I look for her! Today was no different. I scraped some paint chips into a small plastic bag, and like a cat presenting a dead mouse, I gave the paint chips to her. Her only question was the quality of paint desired. The contractor grade was $30, intermediate was $50, and premium was $70 per gallon. I thought to myself $70/gallon for pain on a wall that I seldom see, duh! I opted for intermediate.

She slid over to her magic cauldron, stoked the fire with another bone from the adjacent bone-pile, read several incantations out-loud, and proceeded to press eleven buttons on the mixing machine. I heard squirts, sprays, spurts, splatters, discharges, and an occasional gush as the ingredients for the proper color entered what was a can of white paint.

She sealed the can with great pomp and circumstance, making sure it would not “blow its top” as she placed the concoction into what appeared to be a Medieval torture device slightly updated by Thomas Edison. As she set a timer and flipped a switch, the store’s lights flickered and dimmed, and the staff looked in our direction! The “Paint Lady” was at it again!

I bought an intermediate brush, a whopping $2.50, along with the paint, and headed out the door for home! 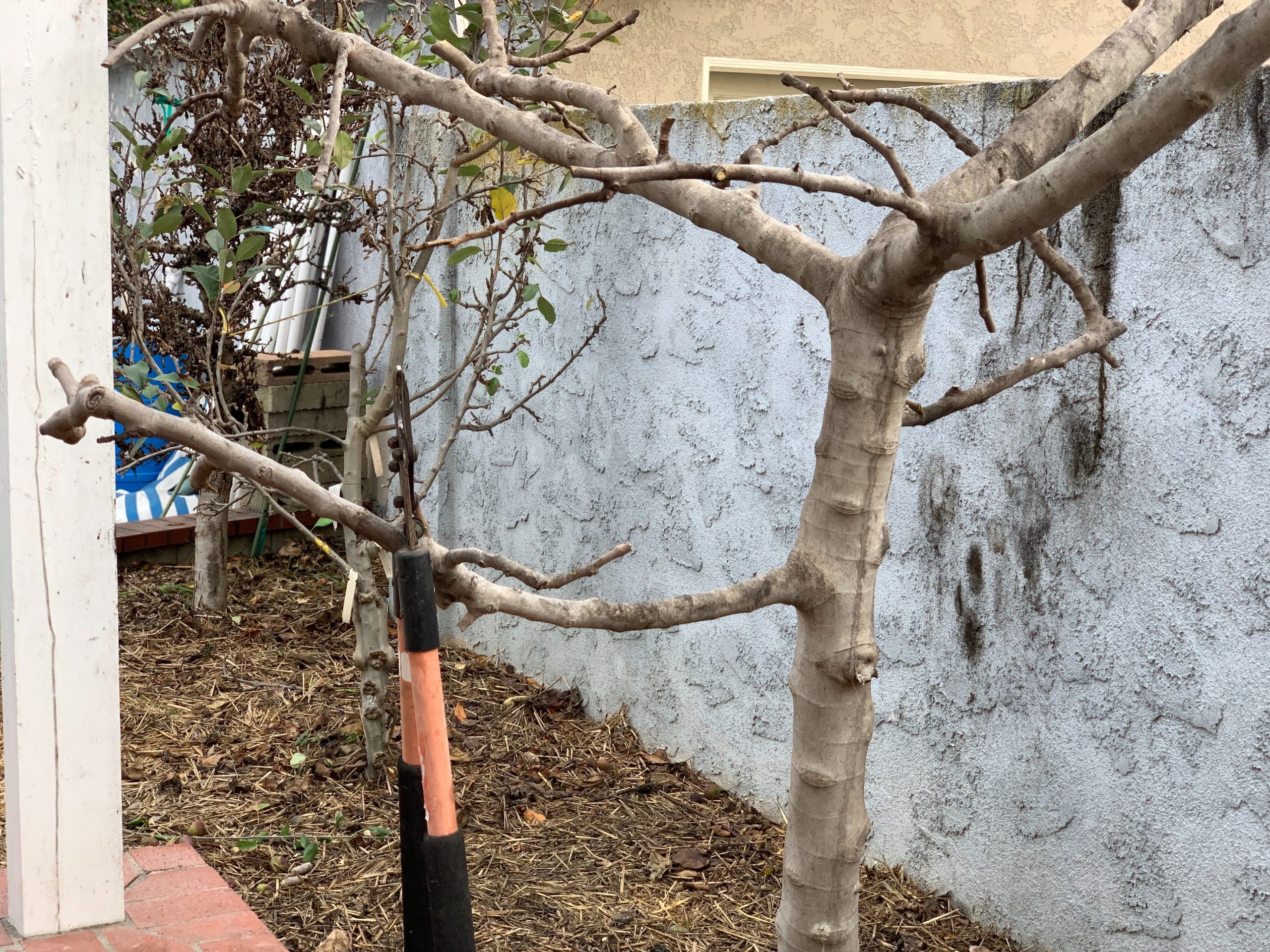 The over-ripe figs left “fig-juice” on the wall! 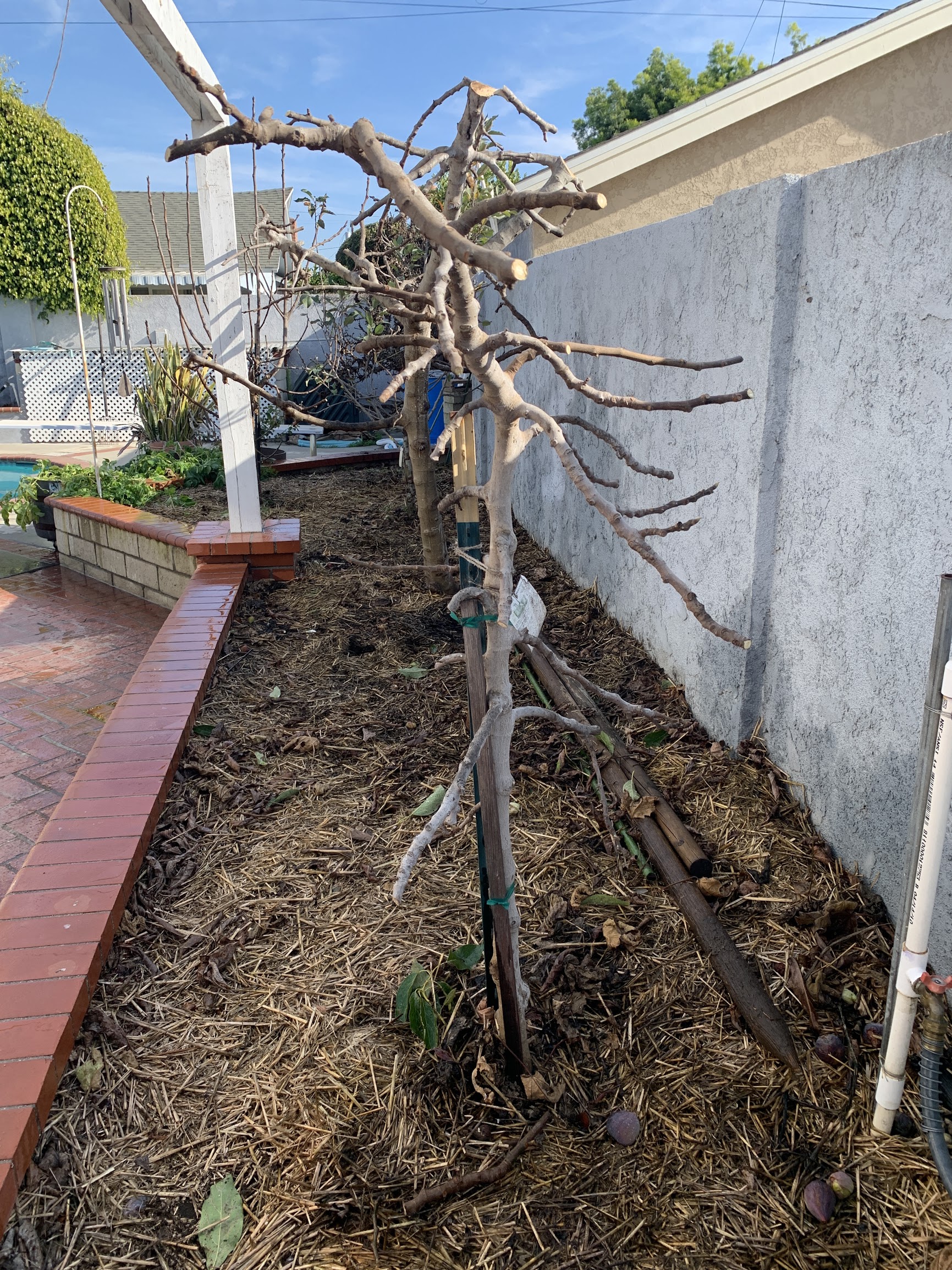 Same wall two hours later, thanks to the great eyes of “The Paint Lady.”

Dang, “The Paint Lady” did another perfect match. The fig remains are gone, and the wall was returned to new. It took me about 30 minutes to cover the places where the fig’s made a mess.

So I got to thinking about working around the house, and a memory popped into my grey matter!

I am sitting here at my office desk looking at the location where I removed a tree yesterday and could not help but think of you and the step-van and the tree!  As I recall, it was a beautiful Saturday morning, and you decided to remove the tree in the parkway.  That tree had paper bark and stickers as leaves.  Melaleuca nodosa, commonly known as the prickly-leaved paperbark, is a plant in the myrtle family. You and Mom never liked it. It was ugly and not great for us kids playing in the yard.

You and I worked digging around the base of that tree for hours.  That tree was probably 18″ in diameter.  I was about nine or ten, as I remember.  You decided if we dug around the tree and soaked the hole in water overnight, the tree would come out easier.

Now it is Sunday, we had our he-man breakfast, and we headed, with confidence, to the front yard.  I recall that you got into the old step-van company truck and backed it up to the tree.  You hit the tree carefully, and it did move.  We tied a large chain to the bumper of the step-van and around the tree.

Our neighbors came out of their little houses to watch the show! In retrospect, I should have sold tickets!

With the greatest of care, you slowly moved forward, the chain got tight, and the tree moved very slightly.  Then you must have had a brilliant idea! You yelled, and Mom and I (and the neighbors) to “STAND BACK.”  You backed the truck against the tree, leaving about 5 feet of chain between the bumper and the tree lying on the ground.

You got out of the truck, moved the chain into the proper position, inspected the situation, and exchanged a few words with Mom.  I remember Mom, who was pretty smart, saying: “Paul! What in the hell are you going to do?”

Into the truck, you bounced with confidence, the safety belt g fastened, your crash helmet was adjusted, dark glasses in position, and you smashed the accelerator to the floor!  I remember well the rear wheels squealing,  a burnt rubber smell wafting in the fresh Sunday air, fire exploded from the exhaust pipes, and the mighty truck lurched forward.  We expected the tree to jump out of the ground.

Alas, the tree stayed where it was, the chain got tight, and the bumper came flying off the truck as the truck sped down the street with you hanging onto the steering wheel for dear life yelling some choice words (which I, fortunately, have now forgotten). 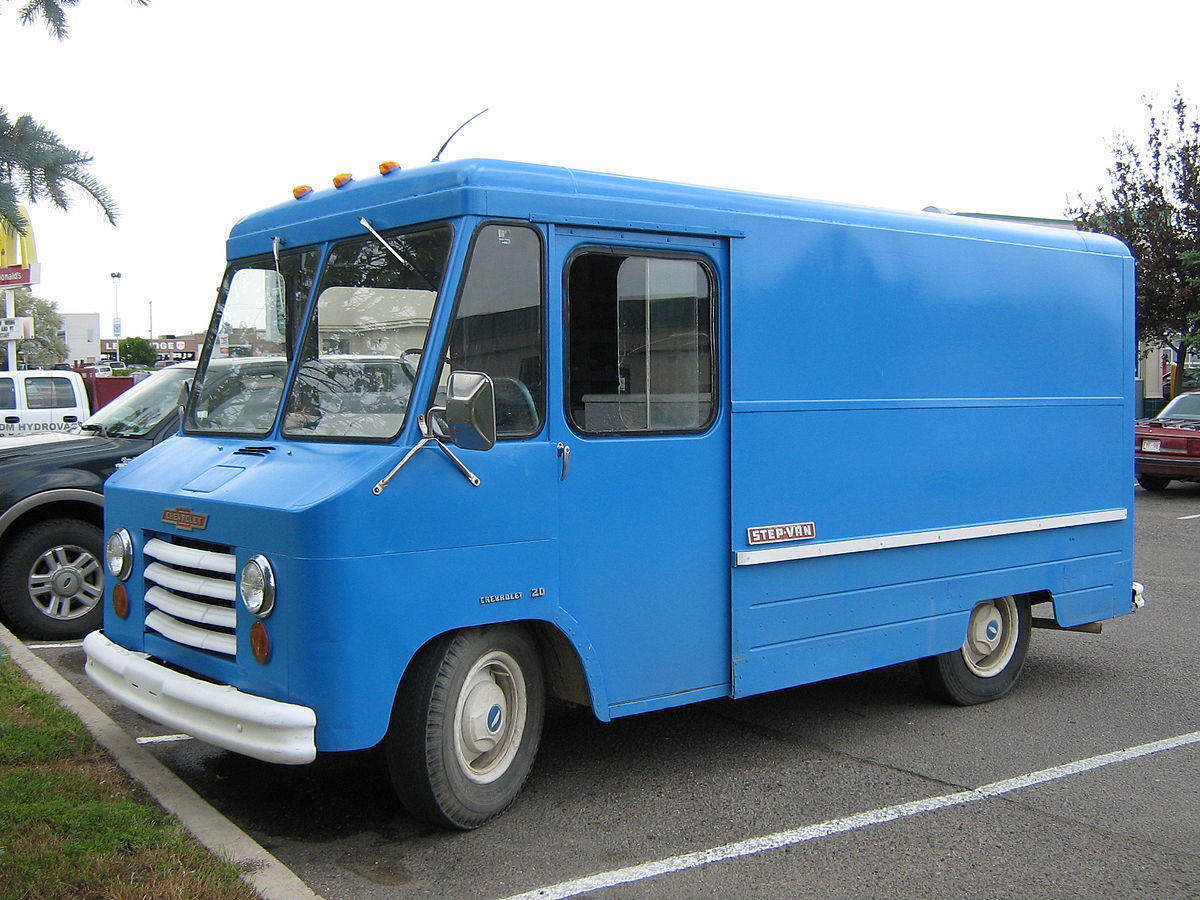 After the “Great Bumper Event”  took place, I vaguely recall us spending almost a week every evening after work,  digging around the base of that damned tree to loosen from the ground.  We finally got it out of the earth a week later by digging it up using brut force!  I often thought the step-van, which you drove back and forth to work, was parking watching us digging and laughing under its breath.

Mom saw you and the chain going toward the tree the evening we got it out out of the ground and headed inside the house, shaking her head.  This time, you tied the tree trunk to the step-van, and we carefully hauled it down the street, never going over 2 miles per hour and into a vacant lot where it eventually was hauled away when the property. 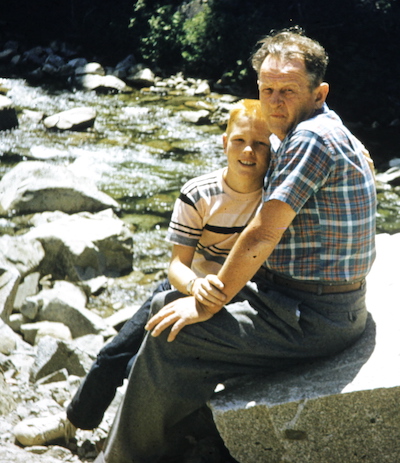 We did NOT go into the tree removal business

Those were the days, and they indeed formed terrific memories!

So Logann was reading my blog, where I included the sound from the dinosaur that scratched Great Grand-Pop-Pop’s face.  Take a look at her reaction to the post:

In the afternoon, I listened to the computer guy on KFI, and then Sue listened to the Fork Report on the same station. I worked in the garage, making some adjustments and planning on the next big event, which is drywalling the garage and insulating it since I spend a lot of time out there these days.

When it began getting dark, I headed inside toward the warmth, and we made some Bat Phone calls.   We talked to Colleen for an hour. I am sharing stories of me growing up! Great fun!  Robin called, and she and Bob enjoyed Crystal Gail last night!

After that, we headed to the Hallmark Channel, which always has lovely entertainment.

Did You Know? The Hallmark Channel is an American pay television cable channel owned by Crown Media Holdings, Inc., which in turn is owned by Hallmark Cards, Inc. The channel’s programming is primarily targeted at families, and features a mix of television movies and miniseries, original and acquired television series and lifestyle programs.

As of February 2015, Hallmark Channel is available to approximately 85,439,000 pay television households (73.4% of households with television) in the United States.

Despite mainly being an apolitical brand, Hallmark Channel has garnered a following among politically conservative viewers in suburban and rural areas who, according to Manhattan Institute for Policy Research’s Steven Malanga in a Los Angeles Times op-ed, feel the network and its original programming feed their desire to “express traditional family values and also to steer away from political themes and stories that denigrate religion.

We stayed home again and did not go dancing as getting into and out of the car is painful right now.  We watched a Hallmark 2019 movie and our series before finally called it a night and crashing at about 11:00 PM. I stayed up another 45 minutes to do the Daily Diary and go over some financial records. Tomorrow is another day!

Just an old retired guy trying to finish out my last years on this planet. I lost my best friend and wife in early 2020. I was blessed again by reconnecting with Dr. Mary Côté, a long-time friend. Mary and I got married July 28th, 2021, and are enjoying life together and plan to spend the rest of our lives being a blessing to our friends and family.
View all posts by Paul →
This entry was posted in Just Us, Letters. Bookmark the permalink.