Something Green Something New!

New Senior’s Exam, you only need 4 correct out of 10 questions to pass. Remember, you need only 4 correct answers to pass. See below for answers!

1) How long did the Hundred Years’ War last?
2) Which country makes Panama hats?
3) From which animal do we get cat gut?
4) In which month do Russians celebrate the October Revolution?
5) What is a camel’s hair brush made of?
6) The Canary Islands in the Pacific are named after what animal?
7) What was King George VI’s first name?
8) What color is a purple finch?
9) Where are Chinese gooseberries from?
10) What is the colour of the black box in a commercial airplane?

So I am off for a walk to CVS to get my inhaler which I could have gotten yesterday if I chose to wait 30 minutes at CVS…yes, 30 minutes to get a box off the shelf which was exactly 6.5 feet away from the register!  They wanted me to shop…I wanted to go home! 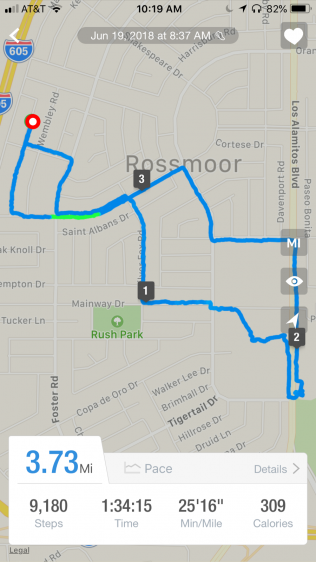 A four mile hike to CVS

After returning home, I had a great meal with my bride  including fresh corn on the cob which I picked form the back yard! After lunch, we cleaned up  and got ready to play golf…yes, after almost a year of no golf it was time to face the gold gods and see what happened.

Frankly, we were surprised.  Paul played nine holes and Sue chipped and putted all nine holes, doing quite well I may add.  She sunk four putts like she had never stopped playing.  I was hitting the ball tight down the fairway just like it was yesterday when I last played.  I did forgot our golf bag meaning Sue’s golf balls had to be purchased, I had no GPS watch, she had no GPS range finder, etc. 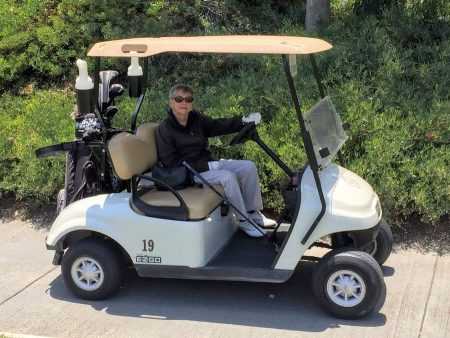 Golf… First time in a year!

I remember an old saying we used in high school (back in the early 1960’s), which was “If it doesn’t go, chrome it” meaning put a lot of chrome on your car if it is not fast…the girls like that!  So, since I can’t play well, I dressed pretty snazzy with my bright purple shirt.  Notice the 40 pounds gone away?  I no longer look like Santa on vacation!

No remarks about those white legs…I am wearing nurses stockings!  Now I will have to wear shorts around the house when I work in the back yard to brown up those suckers! 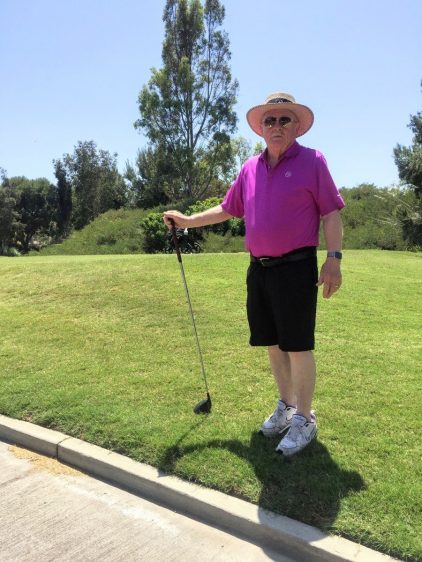 I kept the iPhone on to measure the distance traveled!  I did about 6.3 miles today and close to 14,000  steps! 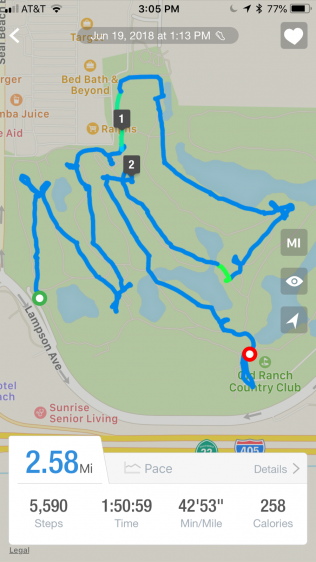 After the game, we sat with Bunnaford at Old Ranch for an hour and had a drink…I finished off three beers and Sue had two glasses of wine.  I could hardly make it home after three beers as Mother Nature kept calling.  Based upon the fact the beer was 0.5% alcohol, I would have needed to drink 18 an hour for three hours  to drive impaired!

We departed for home and watched some TV as both of us were a little tired after playing nine homes, first time in a year!

OK, now for the answer to the seniors test:

1) How long did the Hundred Years War last? 116 years
2) Which country makes Panama hats? Ecuador
3) From which animal do we get cat gut? Sheep and Horse
4) In which month do Russians celebrate the October Revolution? November
5) What is a camel’s hair brush made of? Squirrel fur
6) The Canary Islands in the Pacific are named after what animal? Dogs
7) What was King George VI’s first name? Albert
8 ) What color is a purple finch? Crimson
9) Where are Chinese gooseberries from?  New Zealand
10) What is the color of the black box in a commercial airplane? Orange (of course)

What do you mean, you failed?

Just an old retired guy trying to finish out my last years on this planet loving my best friend and wife, having fun, learning, and passing on helpful things to others.
View all posts by Paul →
This entry was posted in Friends, Walking and tagged Friends, Golf, Old Ranch, Walking. Bookmark the permalink.
Powered by Maribol IMDB Plugin