A Beautiful Day In The Hood!

We got an early call from the UK where Brian just received his package from us (via Amazon).  It contained a “Make America Great Again Cap” and Jan, his bride, said he danced around like a six-year old at Christmas getting his first train!  Brian would not take it off the whole day! 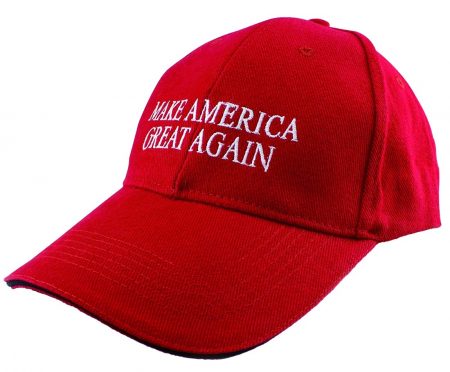 Sometimes we wonder how there can be such a difference in two “leaders”…Obama accomplished zip, let the Iranians and Koreans go wild, spend billions on NOTHING, worsened race relations significantly, had the Hilligator running the State Department, just a series of disasters!

Paul had hopes for Obama that he would provide leadership and be at a minimum a “middle of the road” person but alas, he turned left…went into the ditch..stayed they for seven years!  Too bad!

Trump got us out of the silly climate change accord (a means to tax the USA more than it is already), brings Kim Jung Il to his knees, explodes the economy, reduced unemployment to the lowest since the 1970’s, raises black and hispanics in the workforce to record highs, etc. etc. etc. Junks silly regulations!

Meanwhile, our press is infatuated with a) a non-existent Russian collusion investigation, and b) some silly broad and Trump from ten years ago… Give me a break!  Oh well, life in American these days!

Time to clear the head and take a walk! Today PAul found some streets he had not visited in quite a while hence the jagged path! 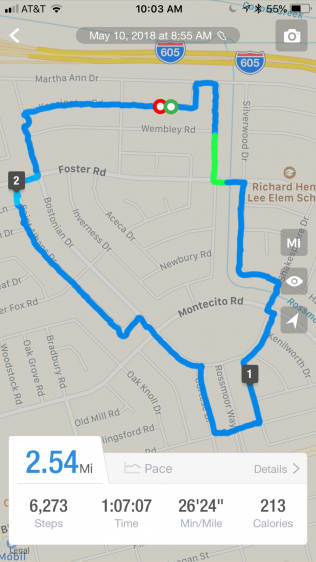 Chugging right down the avenue!

The, all of a sudden, a blinding red flash appears…Bougainvillea ahead Paul warns other walkers!  But of course you know that the flowers are white…not read, right? Yep! It’s true, the red “flowers” and a specific type of leaf on the plant! 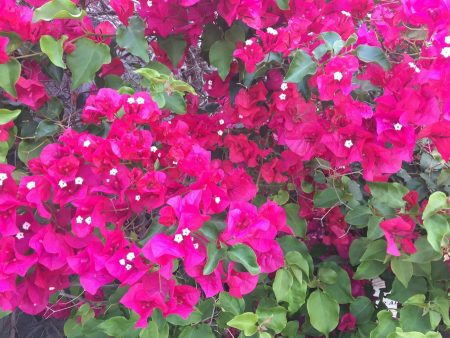 This little yellow fellow was standing up and almost leaning on his neighbor, the tree.  His blossoms were pointing to the sun even though he is not a sun worshiper! 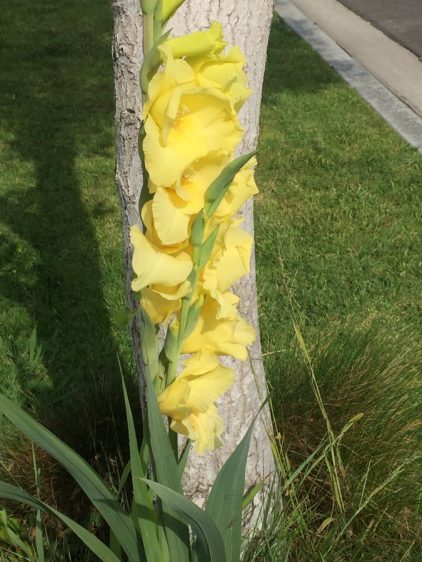 Normally the walk is quiet and Paul gets time to think but in the distance, Paul hear the sounds of horns..many horns…the are became horny…no, perhaps that was Paul!  Indeed, it was a horn tree…not really, its called a Yellow Angel Trumpet! Paul resisted touching the tree for some reason and upon researching it after getting home, he found out it was a good idea!.

Did You Know: Every part of the angel trumpet is highly poisonous, including the leaves, flowers, seeds and roots. All contain the toxic alkaloids scopolamine, atropine and hyoscyamine, which are widely synthesized into modern medicinal compounds but are deadly poisonous if used outside a doctor’s supervision.

Although every part of the plant is dangerous, the oblong, fruitlike seed pods and colorful flowers pose the greatest risk in home landscaping because they are visually appealing to curious children and because they contain the highest concentration of toxic compounds.

Poisoning occurs when plant residue from angel trumpets enters the blood stream or gastrointestinal tract, whether by accidental ingestion or absorption through the mucous membranes. One common and insidious means of poisoning occurs when a gardener with contaminated hands rubs his eyes or consumes food, which leads to a rapid onset of symptoms. Symptoms include muscle weakness, dilated pupils and dry mouth, as well as a rapid pulse, fever and hallucinations. Paralysis and convulsions may also occur, as well as coma and death. 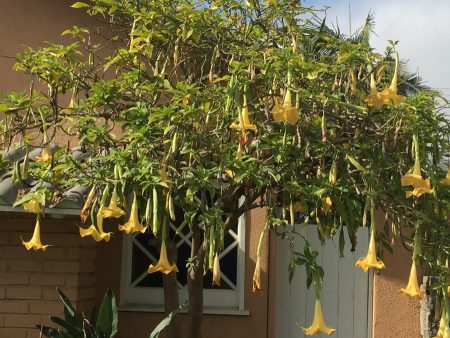 WARNING: DO NOT TOOT MY HORN!!

We have country living here in Rossmoor this being a great example.  Looks like it could be a cabin out on the wilds of Montana but yet, it is right here in town! 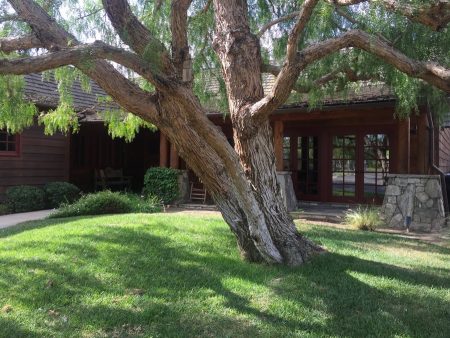 No! Abe Lincoln was not born here!

Further on down today’s journey the Daiseys and they were not being driven…except for perhaps the sunshine! They were quite pretty to look at. 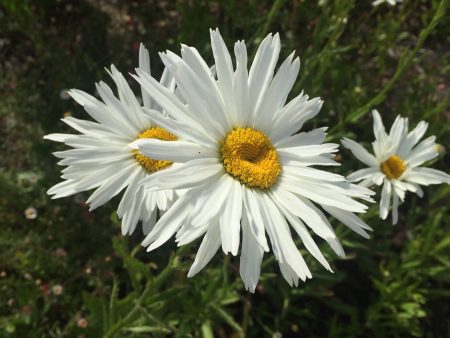 How did I get my name? ‘Daes eag’ is thought to mean ‘day’s eye’, after the way in which it opens at dawn.

Plants seem to grow everywhere and this little guy was on an eight foot block wall fence and was doing well!What Does the Jasmine Flower Mean?
The jasmine flower is associated with love, Jasmine also symbolizes beauty and sensuality. In some cultures, Jasmine represents appreciation and good luck. When used in religious ceremonies jasmine represents purity.
Jasmine’s meanings varies depending on the culture and setting. 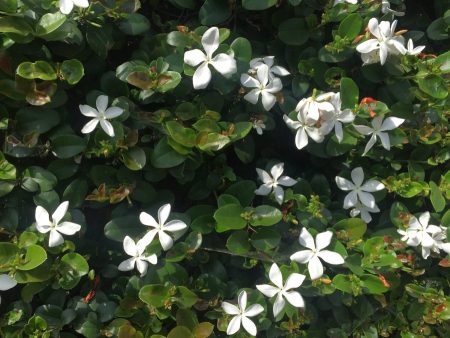 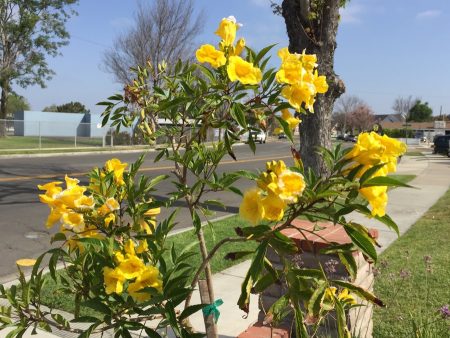 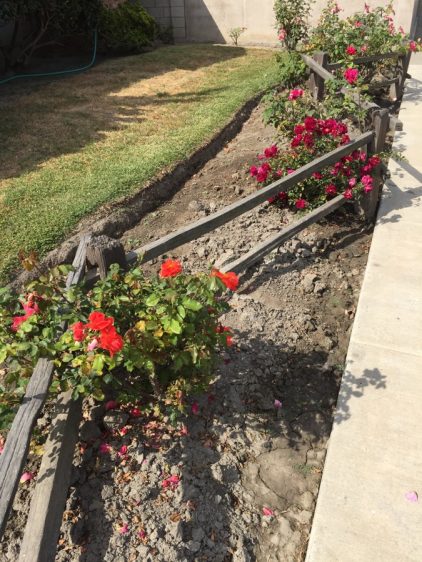 Captive but not for long!

If you do not have birdies in your garden, you can always buy a few and sprinkle them liberally about the branches! 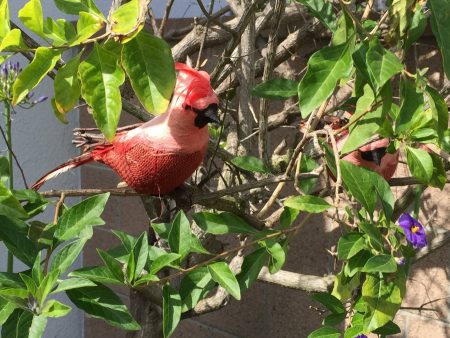 What do you think he is thinking 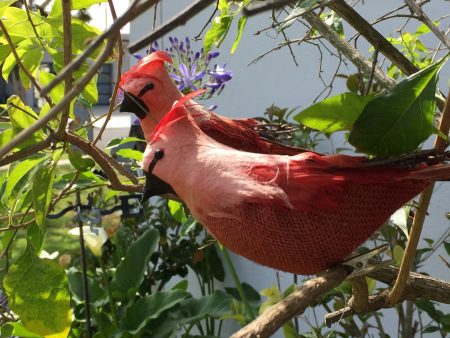 They have spotted something!

Thank goodness they are stuffed otherwise they would be flying into the tree next door and biting the apples! 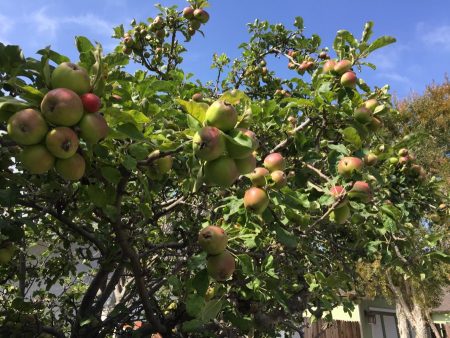 Yummy and they make great applesauce!

After returning home, we had a small breakfast/lunch and then Paul worked in the yard a bit which included moving the trash cans to the front yard.  We then watched TV for a couple of hours efore getting ready to go to the Phoenix Club to dance with friends. 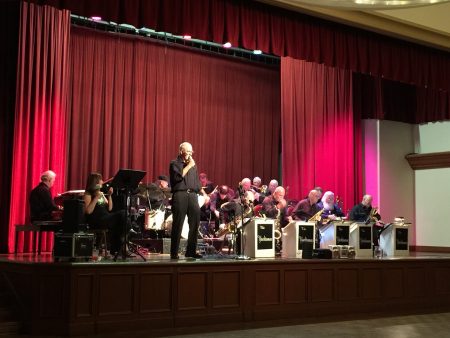 Nothing like dancing to the sounds of the Big Bands!

We were a tad hungry by 7:30 PM so we ordered a cheese filled pretzel with beer/mustard sauce… good groceries… at the entire thing!

We made it home by 10:00 PM and then watched some TV before crashing.

Just an old retired guy trying to finish out my last years on this planet loving my best friend and wife, having fun, learning, and passing on helpful things to others.
View all posts by Paul →
This entry was posted in Dancing, Food and Wine, Friends, Walking and tagged Dancing, Friends, Phoenix Club, Walking. Bookmark the permalink.
Powered by Maribol IMDB Plugin