We were off to South Coast Repertory to see our 22nd viewing of Scrooge!  Please join us!

Did you know? Humbug is an old term meaning hoax or jest. While the term was first described in 1751 as student slang, its etymology is unknown. Its present meaning as an exclamation is closer to ‘nonsense’ or ‘gibberish’, while as a noun, a humbug refers to a fraud or impostor, implying an element of unjustified publicity and spectacle. The term is also used for certain types of candy.  In modern usage, the word is most associated with Ebenezer Scrooge, a character created by Charles Dickens. His famous reference to Christmas, “Bah! Humbug!”, declaring Christmas to be a fraud, is commonly used in stage and television versions of A Christmas Carol. 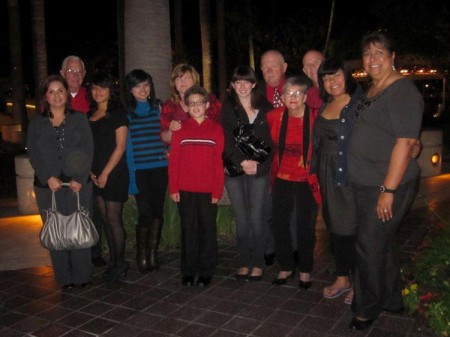 A wonderful afternoon was had by all!!

Just an old retired guy trying to finish out my last years on this planet loving my best friend and wife, having fun, learning, and passing on helpful things to others.
View all posts by Paul →
This entry was posted in Dancing, Family, Food and Wine, Friends, Theater and tagged Christmas, Dancing, Dining Out, Elks Lodge, Family, Friends, Theater. Bookmark the permalink.
Powered by Maribol IMDB Plugin