Friday Has Arrived; Surprise, We Are Ready For You!

Fact: The Philippines consists of 7,641 islands – The Philippines is an archipelago, which means it’s made up of a group of islands—7,641 islands, to be exact. That figure does not include the thousands of sandbars and other landforms that emerge during low tide. 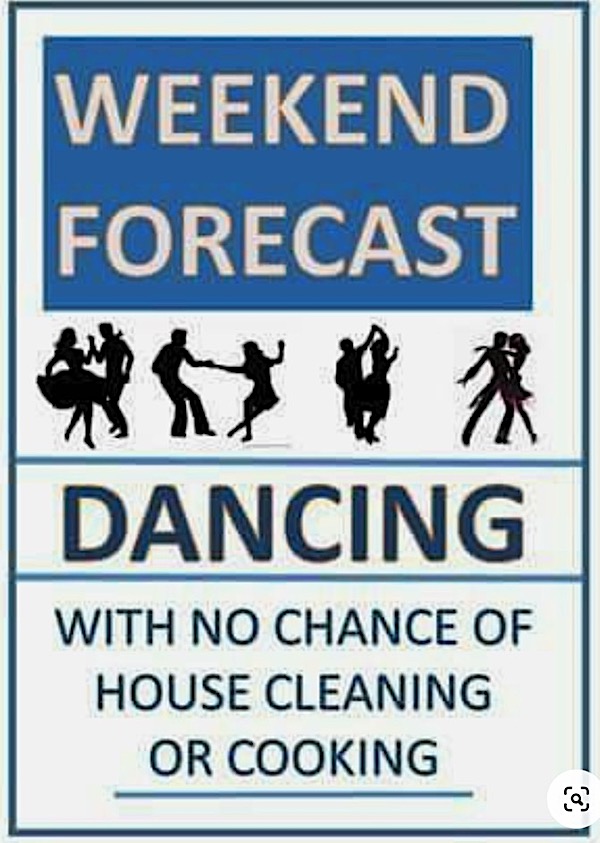 It is 6:00 AM and Scout, The Wonder Dog, shows us that he can read the clock. He strolls around the bed, pawing at any human form close to the side. We either have to take him out or huddle at the center of the bed and not make any noise. Finally, at 6:13 AM, I broke down and took him outside. After a few minutes, I heard Scout whimpering; I looked! 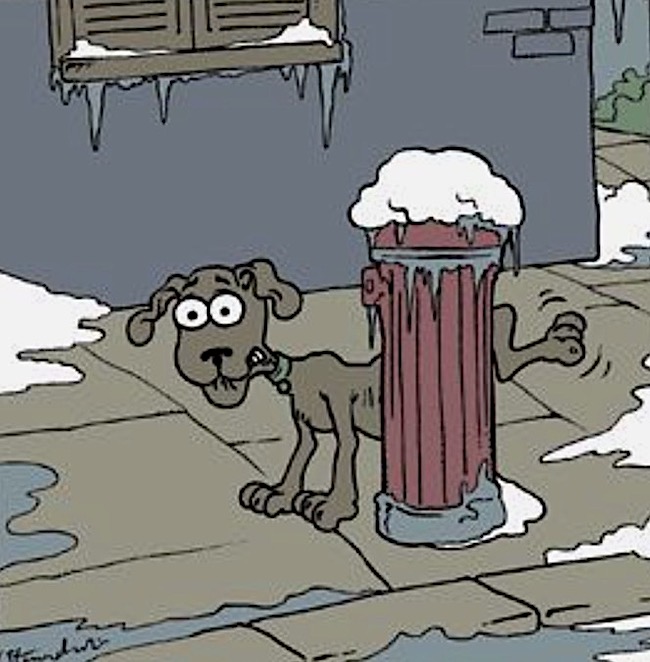 Scout hadn’t learned from the time he got his tongue stuck to the hydrant.

Before we did chores, we walked Five Miles (a.k.a. Scout) around the block, about 0.8 miles.

We needed to do some chores; the bank, the market, the cleaners, the jewelry store, and decided to stop at Jan’s and attempt to fix the water sprinklers. Well, the sprinklers needed some tools, so we visited instead, 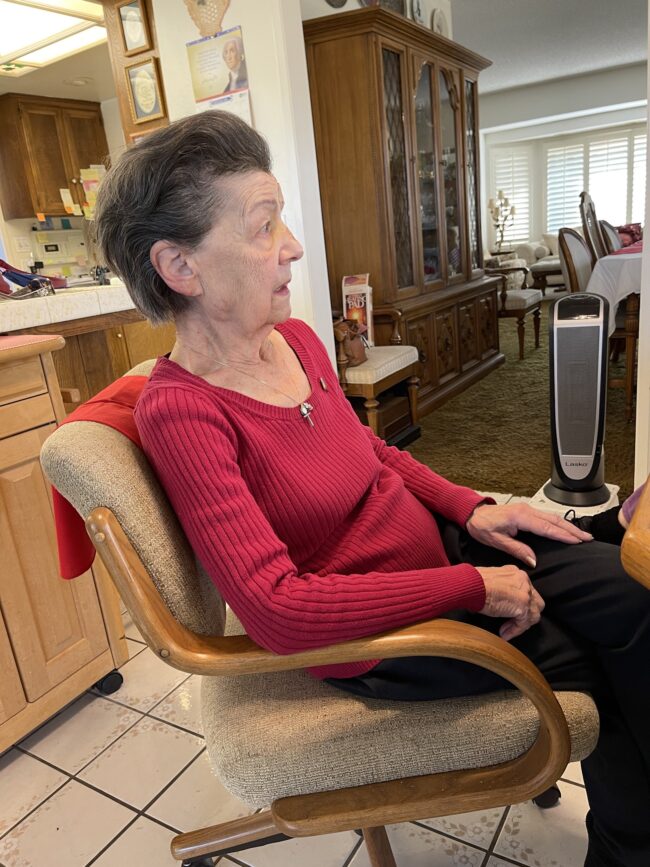 We discussed cooking and dancing and kids!

We returned home and worked around the house for a couple of hours, mainly in the office, and it is beginning to come together! We now have a system for our mail, and I had a place for the 2021 tax documents to go!

Our new avocado looks pretty bad, but the tomato (from June of last year) is still excelling! We are getting excited about the garden.

A friend rubbed tomato ketchup on his eyes by accident. In Heinz sight, it wasn’t a good idea. 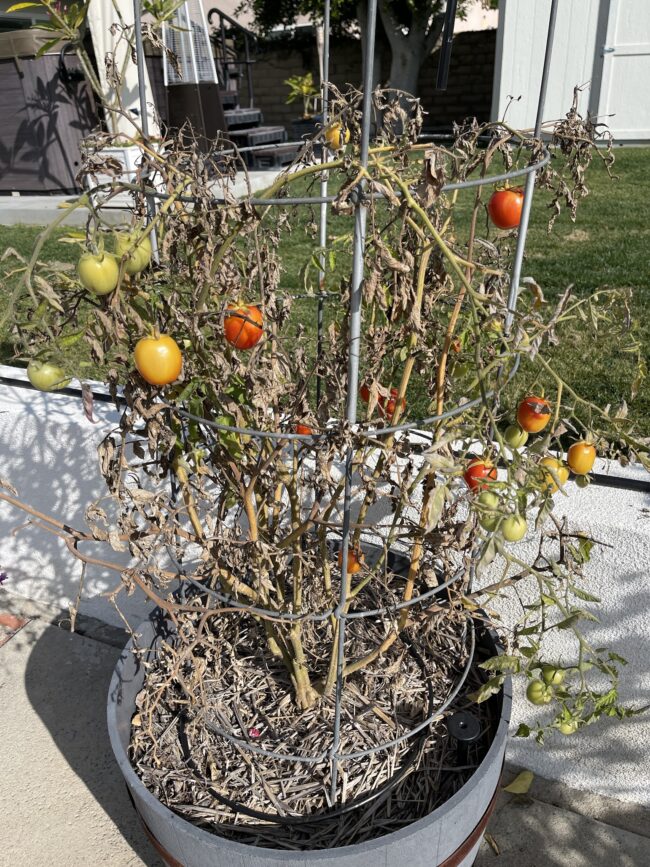 Can you imagine; fresh from the garden tomatoes in January?

Even the ól lime tree is doing well in his new home. Perhaps it’s the total access to sunlight?   I thought to myself, which always comes with unexpected results, “What do you call a lime that opens doors?” Duh! A Key Lime. 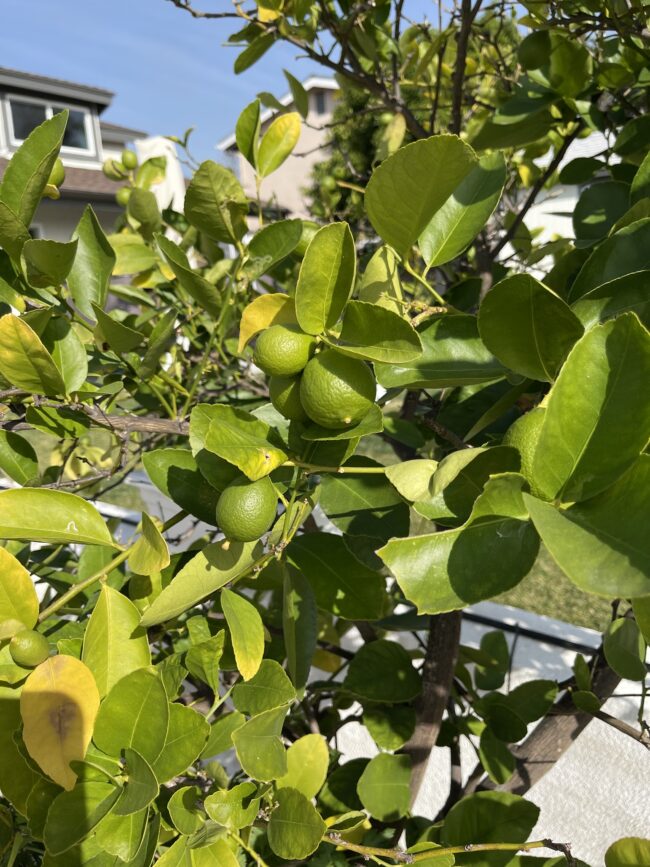 I see many lime-flavored dishes in our near future!

We even have a few flowers. The snapdragons are magnificent right now. When you look at the blossom’s face on, they look similar to a dragon face, and when the flower is pressed gently on the sides, their ‘mouth’ can open and shut.

Did You Know? Snapdragon flowers can are edible, which is why some restaurants and bars use them as a garnish for certain plates and drinks. 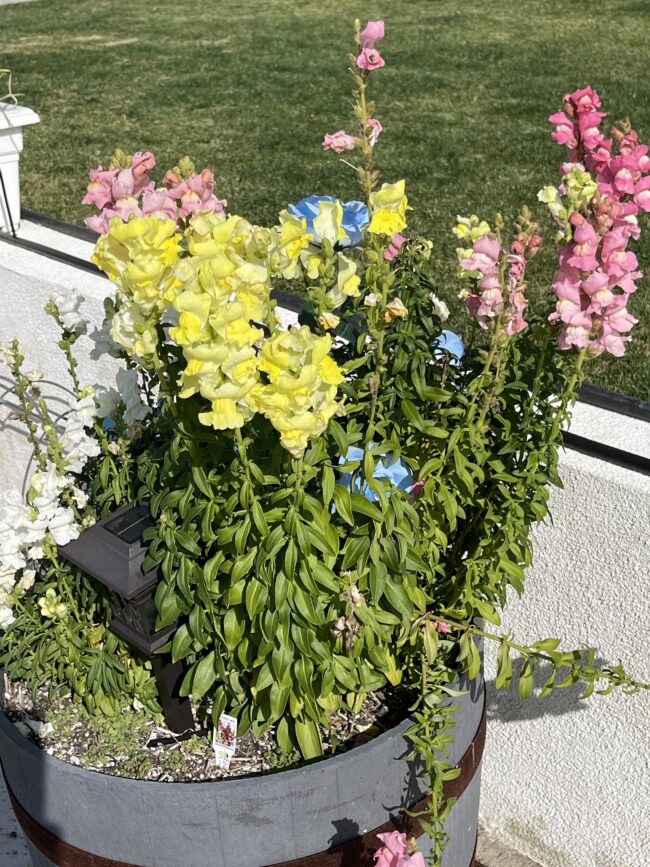 Snapdragons are exciting and beautiful to look at!

It looks like avocado #2 has gone belly-up! He is one week old and is pretty much dead! We will call the nursery and try again or try another kind of tree; I plan to check the soil! 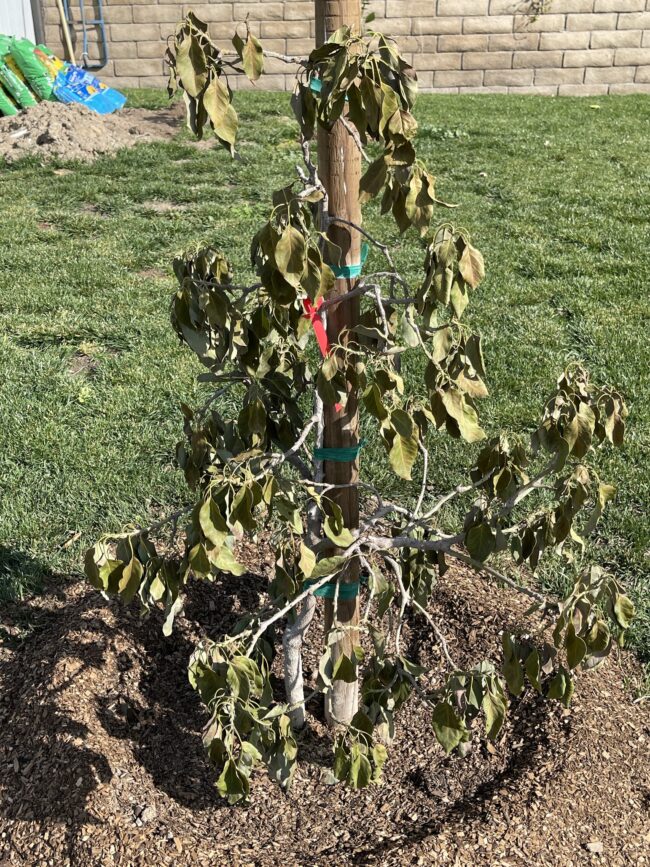 At 2:00 PM, we began getting ready for our trip to Altadena, where we danced with the Rondeliers. It is 45 miles away, and GPS says about an hour. The last time we went to Altadena, it took us two hours, and today it was one hour and ten minutes with lite traffic. When we arrived there early, about 5:00 PM, we went into the lounge and had appetizers and a bottle of Cakebread. I called ahead and got the OK from the GM to enter the private part of the club.

We met up with old friends I’ve danced with for years. Ludwig is from Germany originally, and his wife is from Chile, so Mary had a field day talking to them in their native languages! 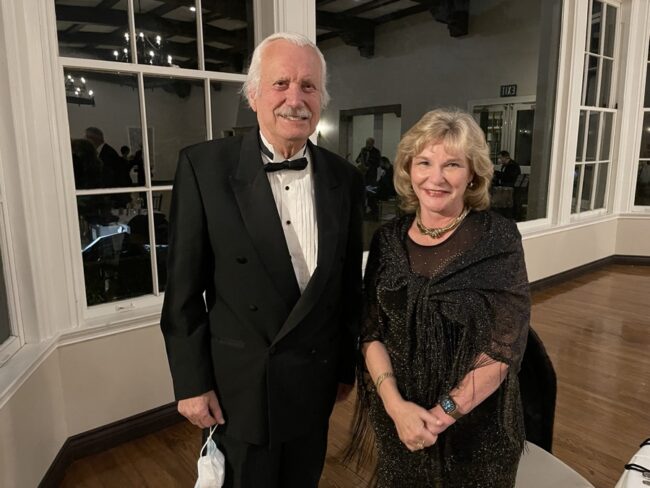 They are looking good!

We got our picture taken, so we will remember we were there. There were only six couples this evening; COVID-19 has retaken its toll. 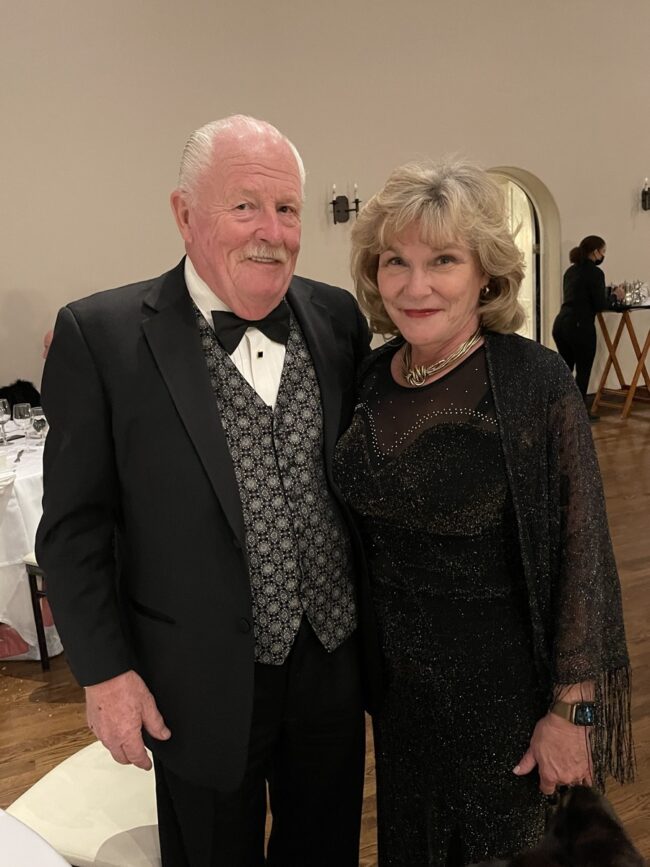 A dashing pair of people if I don’t say so myself!

Wyatt Haupt played tonight, so every bit of music was danceable, and the music was excellent; his selections are fantastic. I asked Mary if she knew the Hula, and she said, “Why, of course. The hula dance is simple: you put some grass on one hip, some more grass on the other hip, and then you rotate the crops.” I should have known!

I tried one more time by asking Mary, “Where do one-legged dancers go for Breakfast?” She gac=ve up, so I replied, “IHOP. I apologized, and we continued dancing with me, wearing a mask in a way I never thought about, stuffed in my mouth! 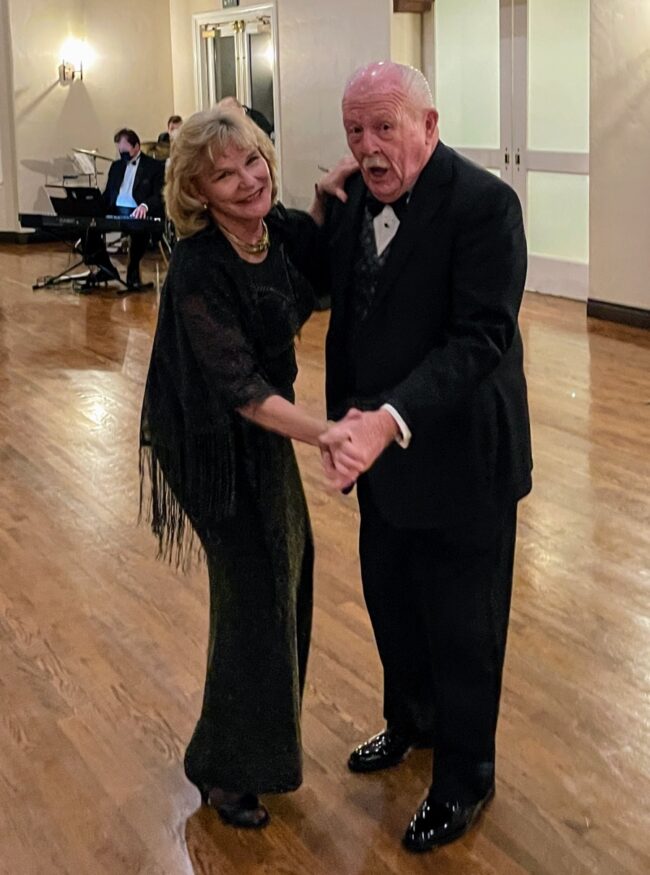 We have fun when we dance especially when I remember an old step I had forgotten for years!

Even though the dance went on until 10:30 PM, we departed at 9:30 PM so Scout could get some relief. There was no traffic on the way home, and we got back about 10:15 PM which was six and a quarter hours. Well, poor Scout had an accident by the door. He was ashamed, but we cleaned it up and talked to him; he tried, but five-plus hours is too long to be away.

I hugged the baby and told him what Groucho Marx once said; “Outside of a dog, a book is a man’s best friend. Inside of a dog, it’s too dark to read.” Scout looked up, turned around, and headed for bed!

Just an old retired guy trying to finish out my last years on this planet. I lost my best friend and wife in early 2020. I was blessed again by reconnecting with Dr. Mary Côté, a long-time friend. Mary and I got married July 28th, 2021, and are enjoying life together and plan to spend the rest of our lives being a blessing to our friends and family.
View all posts by Paul →
This entry was posted in Dancing, Theater, Working Around House. Bookmark the permalink.