A Day To Recover!

The future, the present, and the past walked into a bar. Things got a little tense.

Welcome, Sunday, a day to rest! I called Mary, and she asked if I wanted to come over and cook something.  Well, the answer was a resounding, “Yes.”   I did add a caveat; we had to rest and relax as these last few days have been busy! Poppy was getting too pooped to pop!

I arrived, and Mary had the latest cooking magazines out.  I flipped through a few pages and landed on my favorite, Irish Stew a la Halloween! 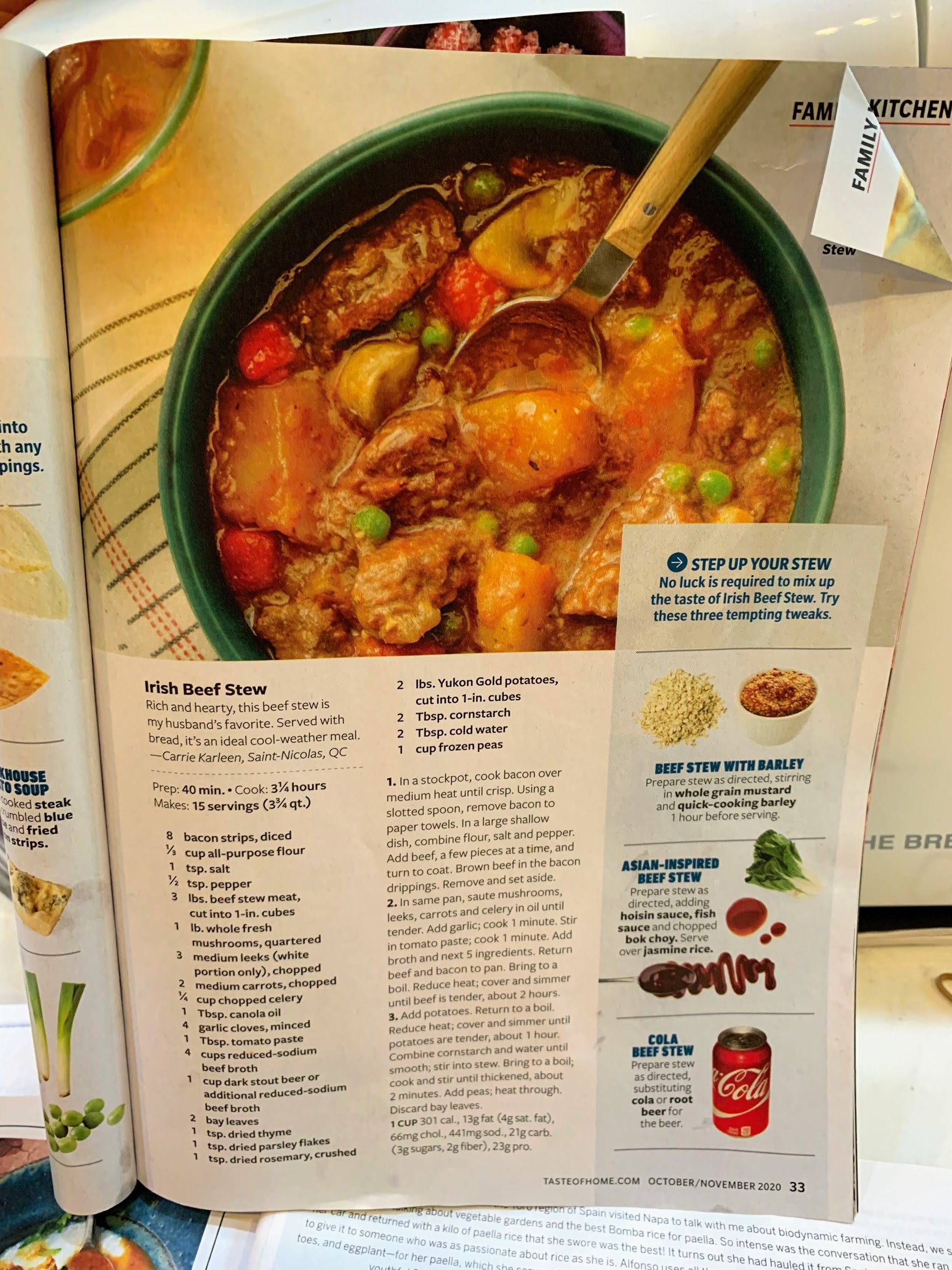 We immediately went to the refrigerator and began to collect the necessary ingredients.  Well, we came up a little short, so it was time for an Albertson’s run.  We donned our cold-weather attire and headed down the road. 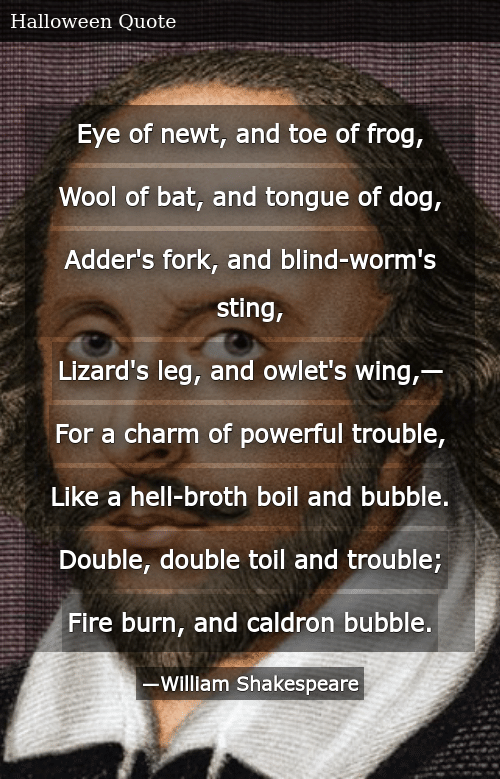 One of our more classy recipes! Thanks to Bill S.

While I was getting ready to go, Mary got the cauldron out, which is used normally to burn loose incense on a charcoal disc, to make black salt (used in banishing rituals), for mixing herbs, or to burn petitions (paper with words of power or wishes written on them). Perhaps we should burn the grocery list?

Arriving at Albertson’s at 10:00 AM, the place was almost empty, almost!  We went up and down the aisles collecting the needed ingredients.  I glanced at Mary’s shopping list, which contained fillet of a hoop snake, the eye of newt and toe of frog, wool of bat and tongue of dog, vampire buggers, adder’s forked tongue, and a blind worm’s tail, lizard’s leg, and owlet’s wing.

On the other hand, my list had more mundane ingredients like stewing beef, fresh garlic, golden potatoes, bloody mary mix, vodka, and whipped cream!  Whipping cream?   How come she gets all the fun stuff? 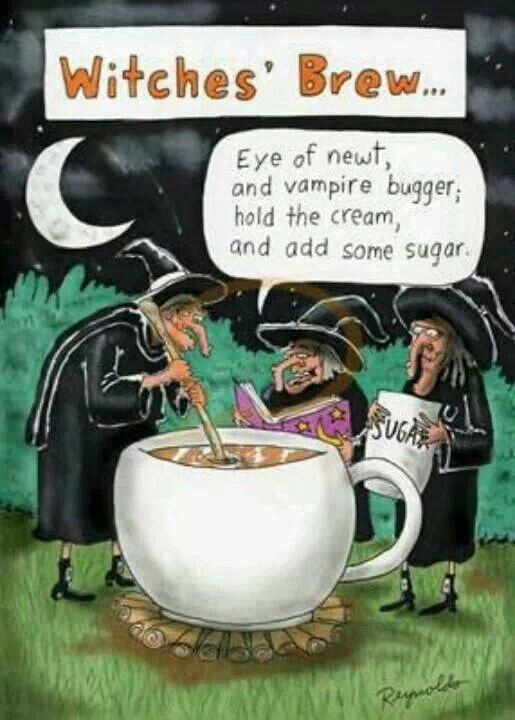 They were out of Vampire buggers; we had to find a substitute!

Returning home, the assistant chef and bottle washer,  yours truly, shifted into action and began the preparatory work.  I got out my $4.95 Ginzo knife, which I ordered from the Home Shopping Channel, and began to terrorize the grocery bag contents. Its blade almost as sharp as an Oscar Meyer hot dog.  The silly thing could not even cut hot butter.

Not to be thrown off my game, I went to the garage on got a pair of welders gloves, two layers of chain-mail, and called 911 to alert them they may be getting a call.  With an ultra-sharp knife in hand, I went to work!  One could hear the air being cut as my blade approaches the sound barrier as it whizzed through the ingredients like a two-by-four through wet cement!.

Mary had to provide some expert guidance, and I wasn’t sure whether to dice, slice, or chop the frog toes?  We made a command decision together, throw in the whole frog! 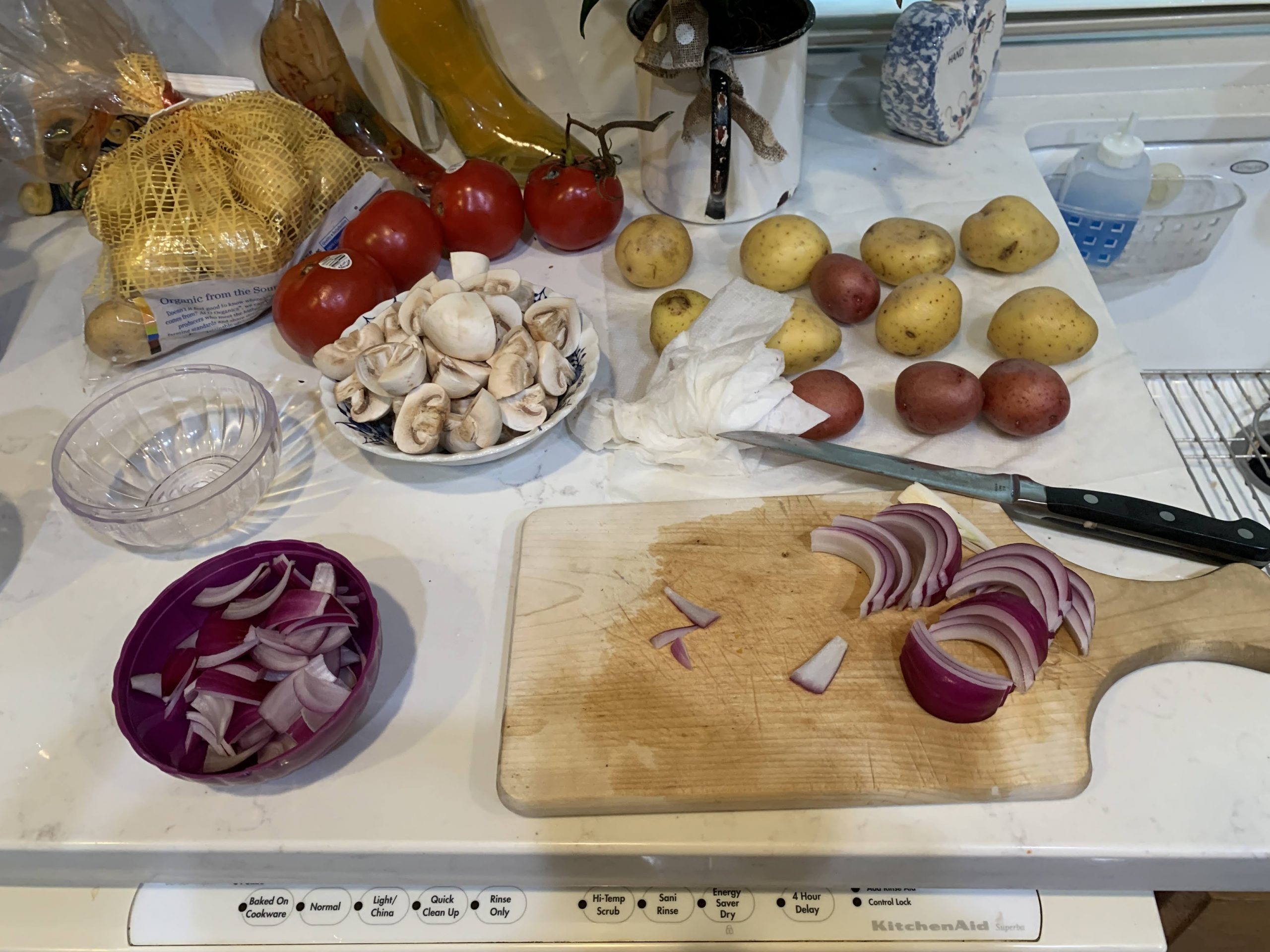 Slide and dice, the prep cook, was doing his thing!

Meanwhile, slaving over the stove, Mary got the turkey bacon crisping and began the browning of the stew beef (yes, we added some real ingredients into the pot).   She is an amazing cook and provided me several burnt offerings.  The bacon got a little crisp.  I drew the line at the wool of bat.

The steam from the cauldron wilted Mary’s hair a bit, but we found a solution to that issue.  (See below) 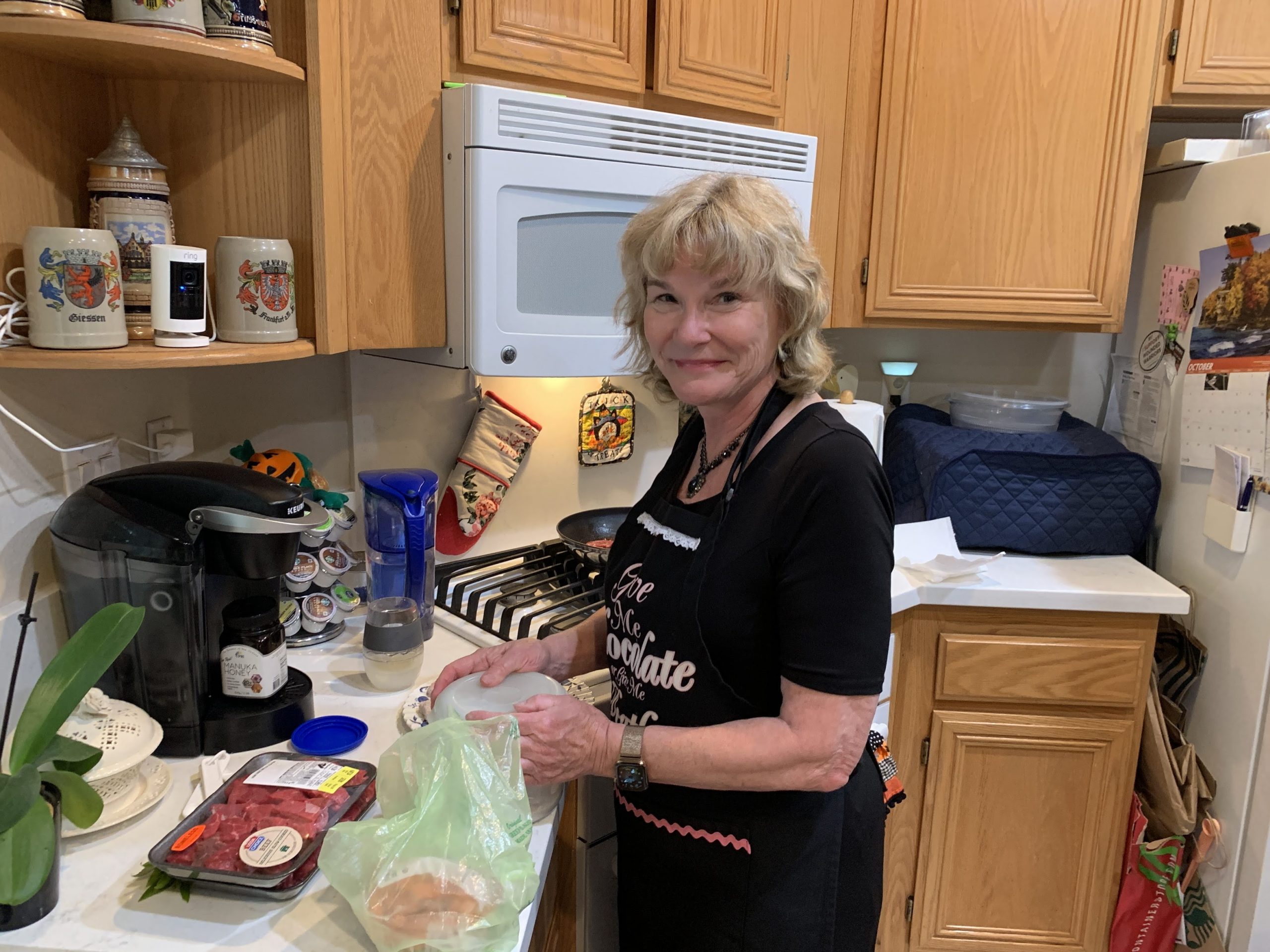 The bacon looked so good I was ready to stop and have breakfast, but alas, my hand was properly slapped as it worked its way toward the frying pan, OUCH!  I can’t seem to get away with anything! 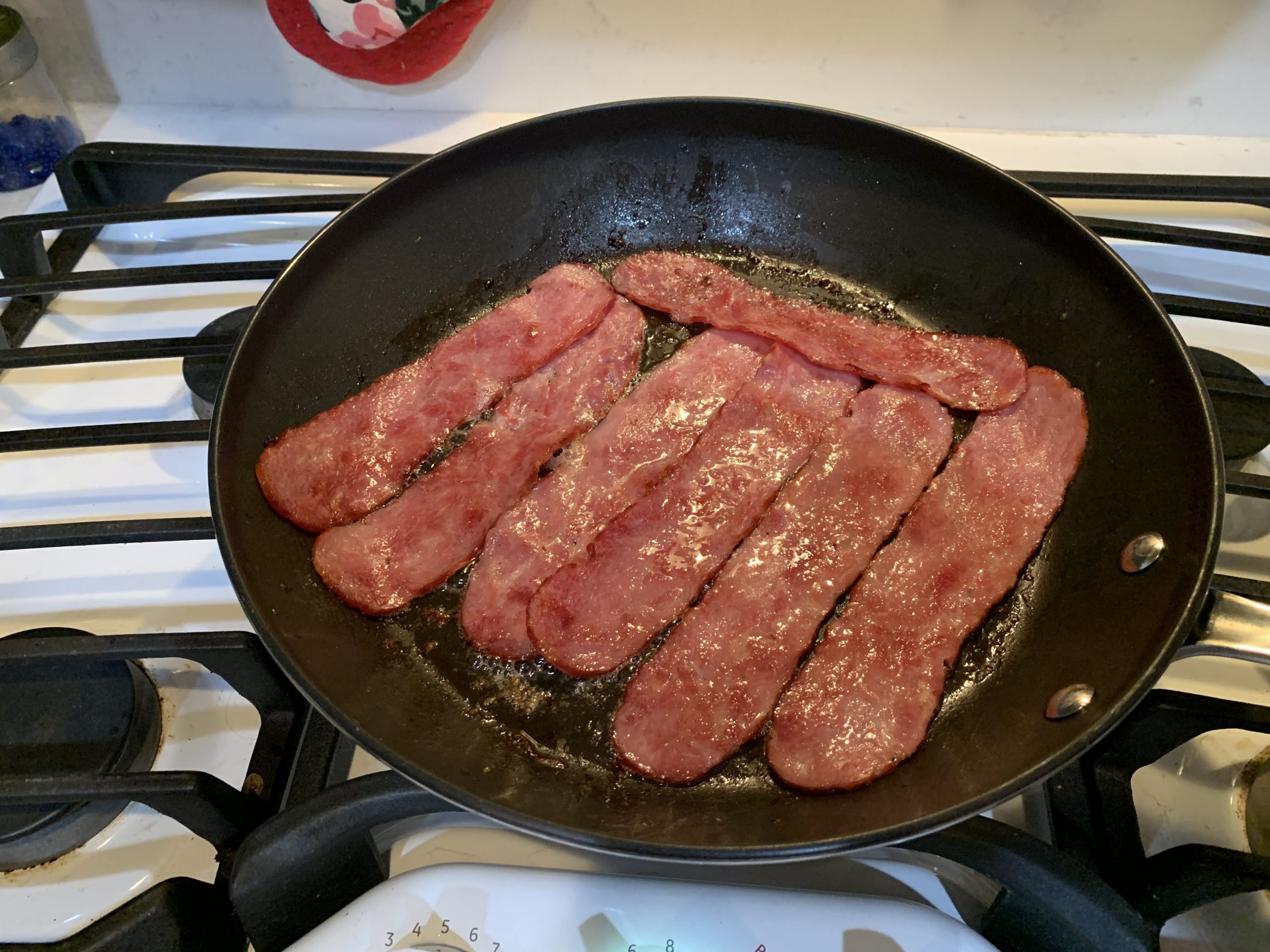 Turkey bacon is cooking up nicely.  Hey, do not laugh; turkey bacon is a real thing!  It is expensive because mating a turkey and a pig is a tedious task and very labor-intensive!! 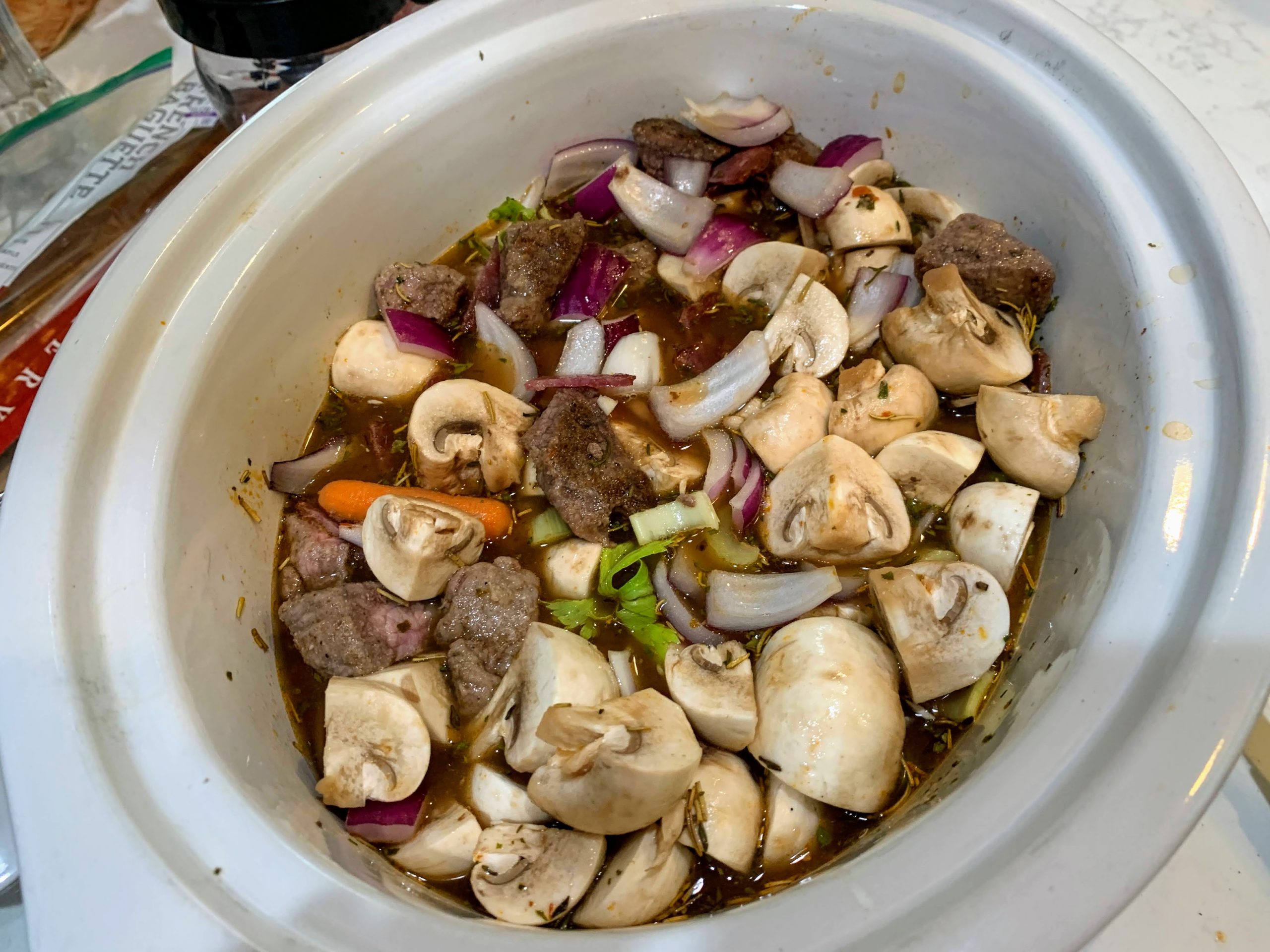 Into the pot, it goes.

Mary did see her hairdo after the steam hit it, so she discovered how to deal with it.  I, being the ever-helpful friend, cut two eye holes in the bag.  However, for the rest of the cooking session, I kept calling her Ralph! 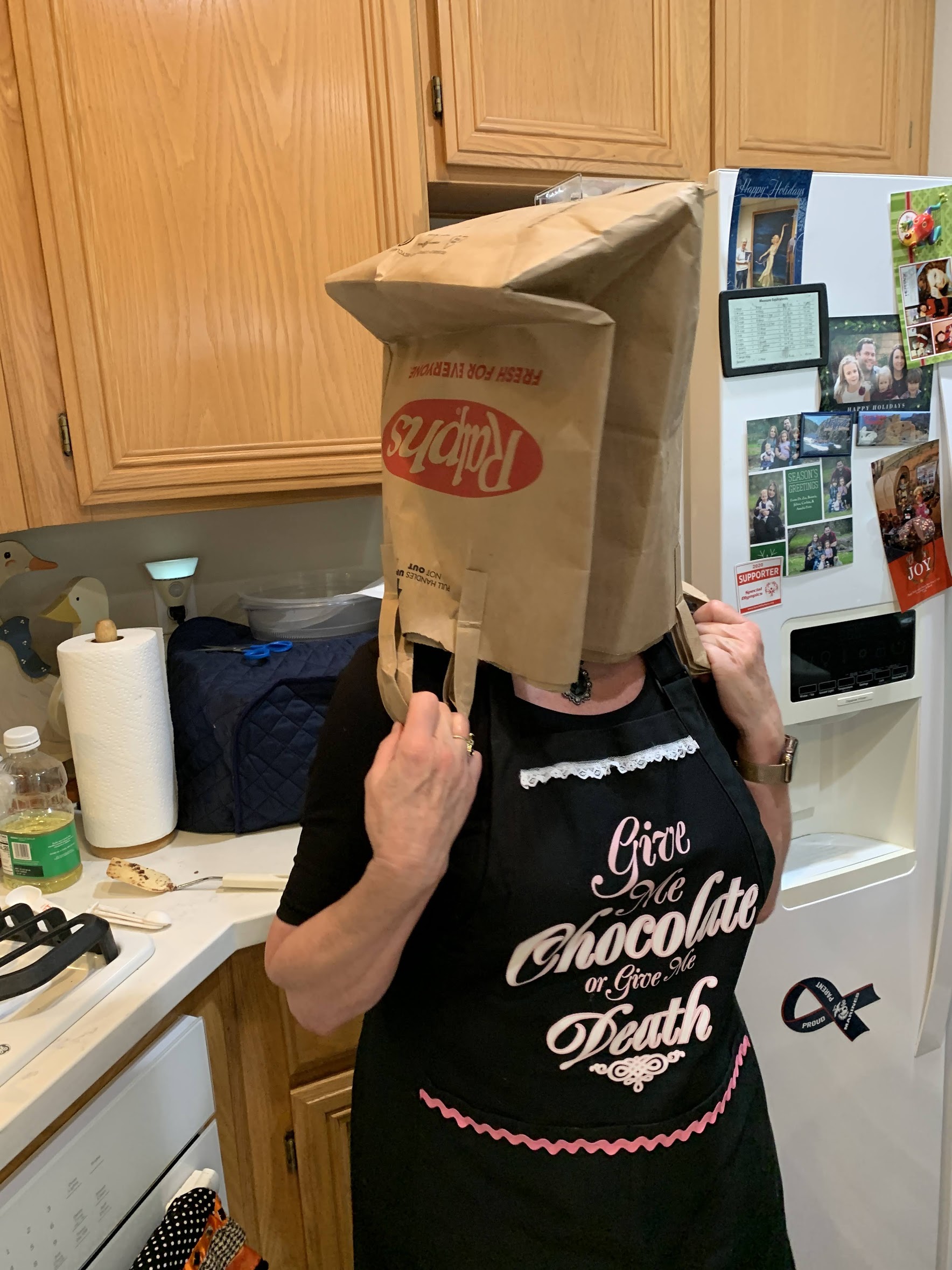 Mary suddenly remembered she did not have makeup on!

Sunday morning was rainy and cold, as evidenced by the picture taken from the kitchen into her backyard.  We liked cooking as the kitchen was warm and toasty, and the scented candles and fireplace made it a wonderful place to be.  Having Ralph there by my side was also quite special. 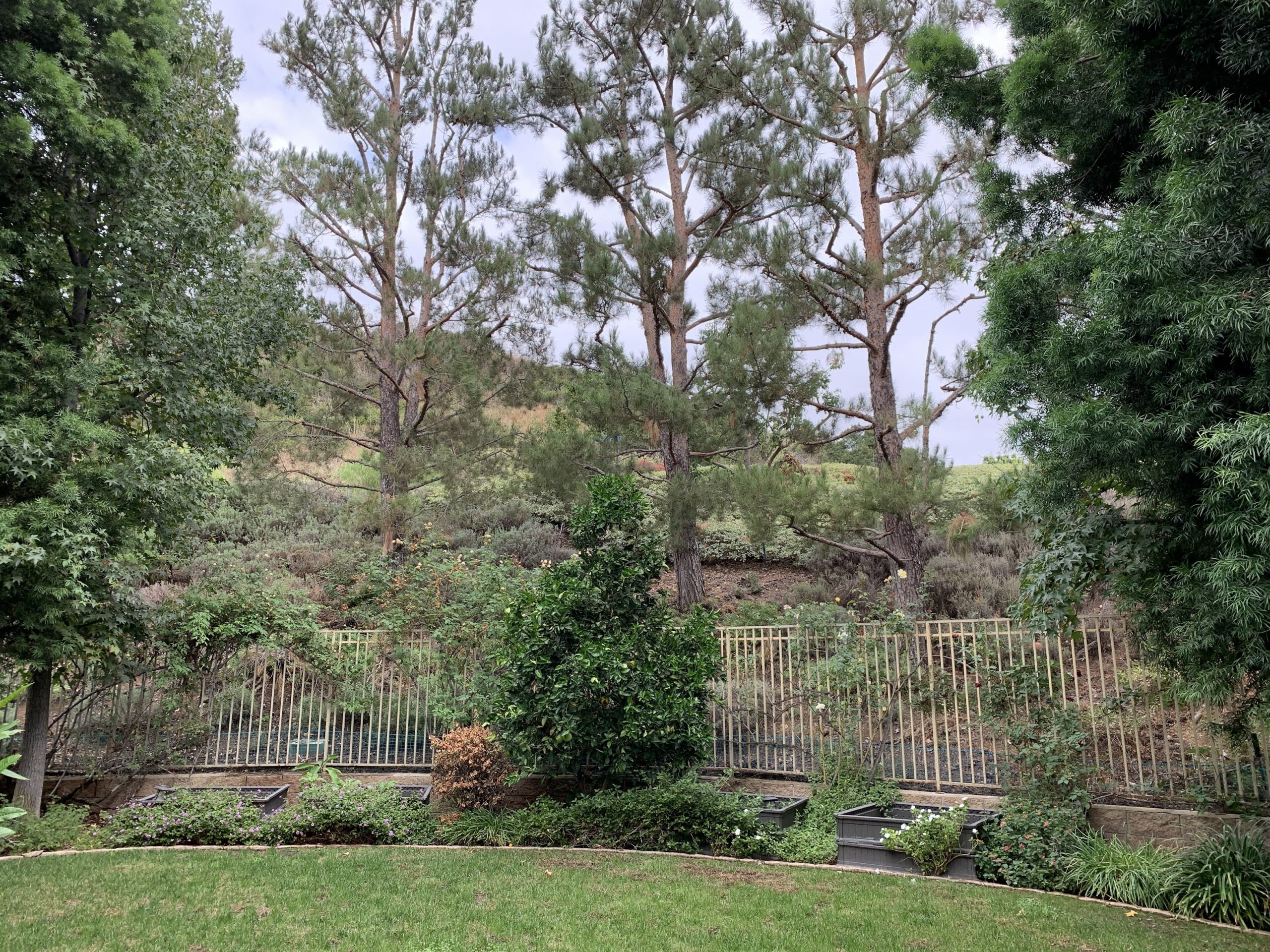 A view from the kitchen, we stayed inside with the fireplace going!

The stew is now cooking away.  Ralph set the machine on “high,” meaning in about 4-6 hours, the dinner bell will ring, and we will hear that all familiar sound of Ralph yelling, “Come and get it!!”

The rest of the afternoon, we enjoyed the fumes from the cauldron, getting up once every half-hour and asking the frog to turn over.  After two hours, he went to sleep, so we mixed up the concoction by hand.  At hour four, the wooden spoon had been eaten away, and we had to hance to a stainless steel device.

Scout and I took a vote, and we decided it was time to sit and work on the puzzle.  Mary turned on the TV, and we watched Halloween movies.  They are too scary for me, so Scout stayed by my side. 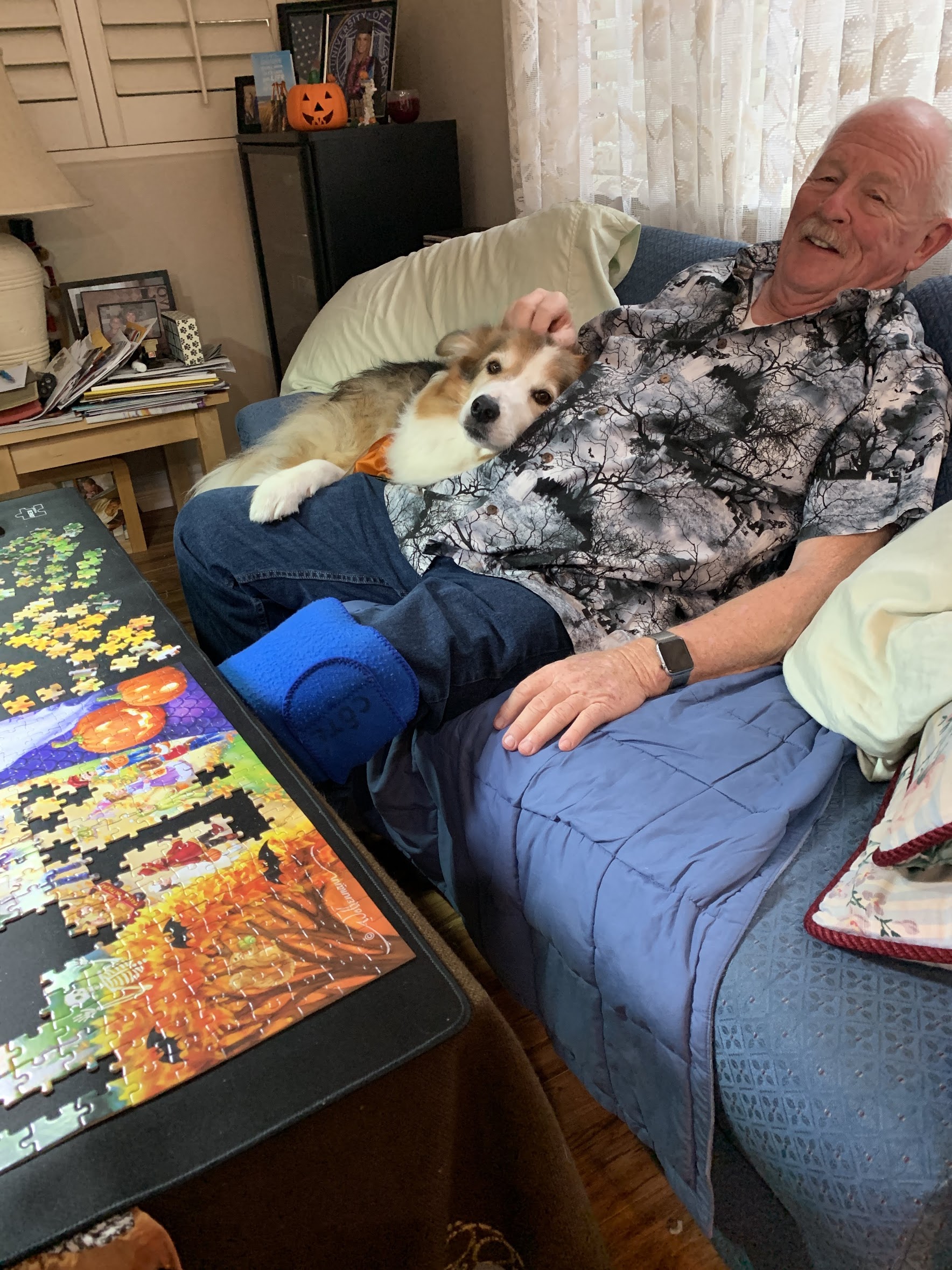 Scout and I assumed our favorite position as we worked on the puzzle.

Late in the afternoon, success was declared.  We did the puzzle!  We are an amazing team, Ralph and I, for the box indicated 4-6 years, and we did it in four days! 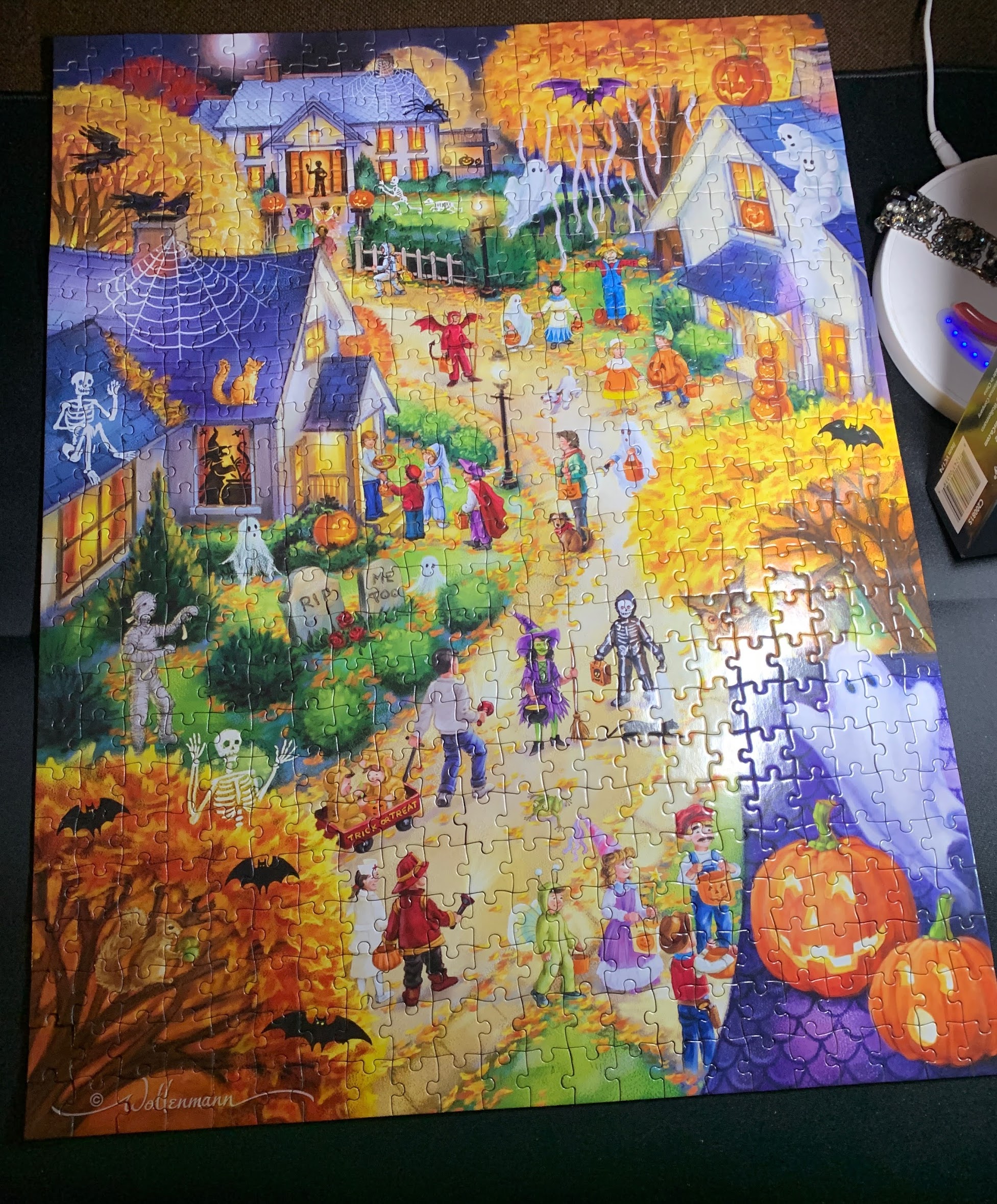 It took us all day, but we succeeded in finishing it!

We had an amazing dinner while watching “Hocus Pocus” and other Halloween movies.

Well, it became 9:00 PM, and since it is a working day tomorrow for Miss Mary, I disconnected from Scout and headed out the door.  I”ll be home in twenty-five minutes.

Just an old retired guy trying to finish out my last years on this planet. I lost my best friend and wife in early 2020. I was blessed again by reconnecting with Dr. Mary Côté, a long-time friend. Mary and I got married July 28th, 2021, and are enjoying life together and plan to spend the rest of our lives being a blessing to our friends and family.
View all posts by Paul →
This entry was posted in Cooking, Food and Wine, Friends, Fun. Bookmark the permalink.