Want to hear a joke about paper? Nevermind, it’s tearable.

The ol’ man is up and at ’em bright and early.  I looked at the bathroom scale and immediately changed into my walking thongs and took off at 100 MPH down the sidewalk.  I must lose at least four pounds before I get back.  Three days of no walking and dining did me in, so the calories must go!

The sun was hidden again, but I walked anyway! 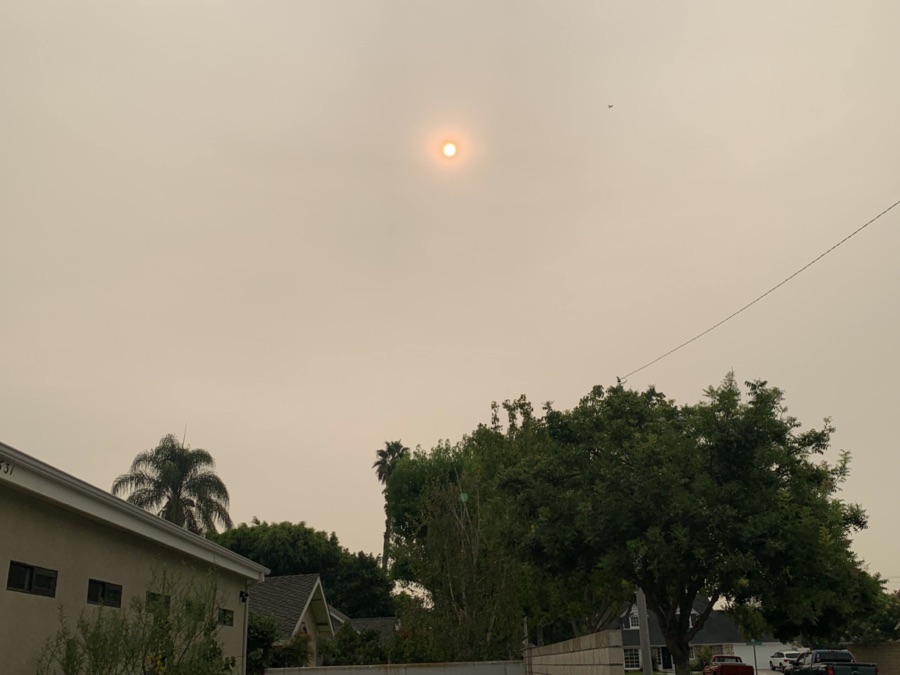 It was dark out, but I walked anyway!

I was zooming along for three and a half miles. I worry about the vacuum I leave behind as I zip through the neighborhood. 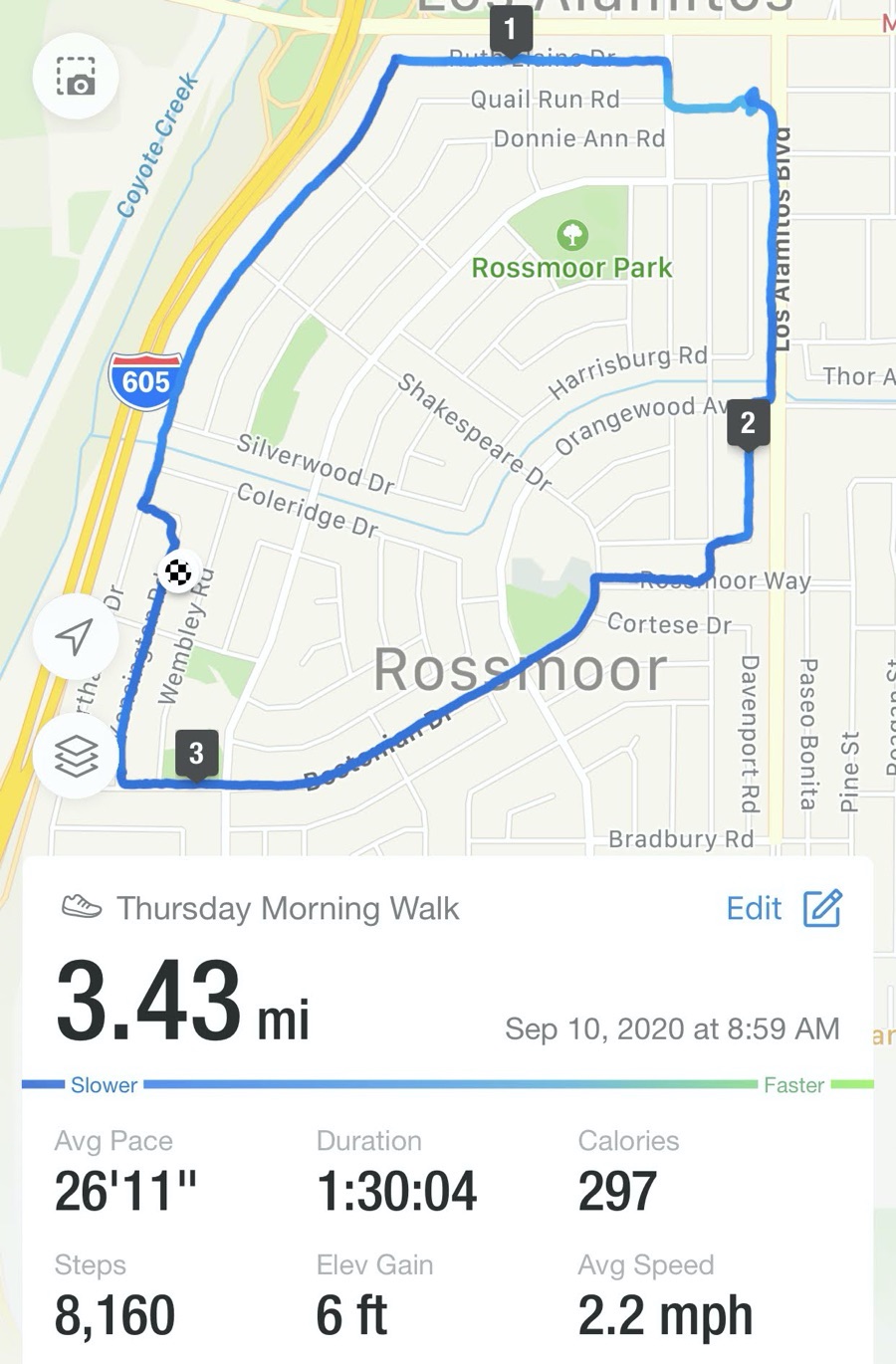 Three and a half miles!

The flowers are still beautiful and ask for someone to stick their nose out to smell them.  Then, via a contract with the local bee union, you get a bite on the tip of your nose. 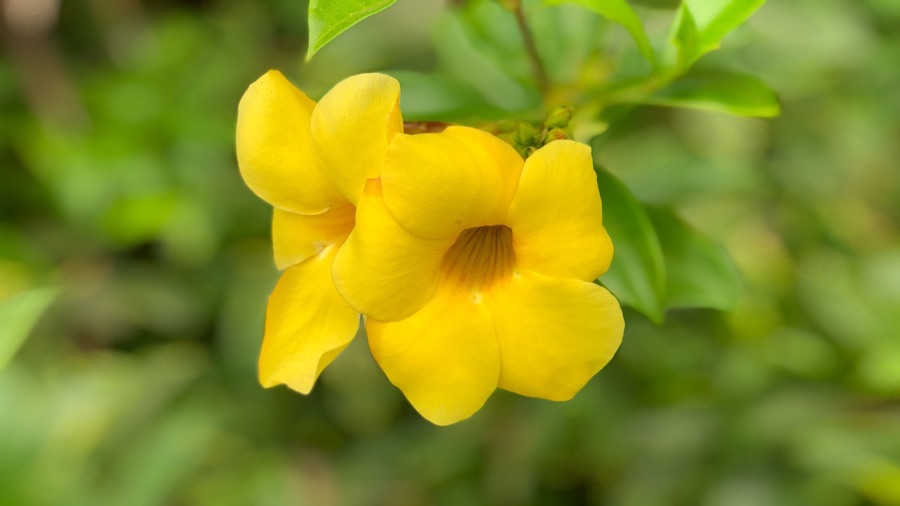 Walking and flowers, they go together!

I returned by 10:30 AM and cleaned up for a visit to “Girls Night Out”.  We were inside today.  I found out to ratted MAry and I out on Sunday; it was Pat.  She meant well, and the ER apologized.  It was OK as we did not know the dancing rules. 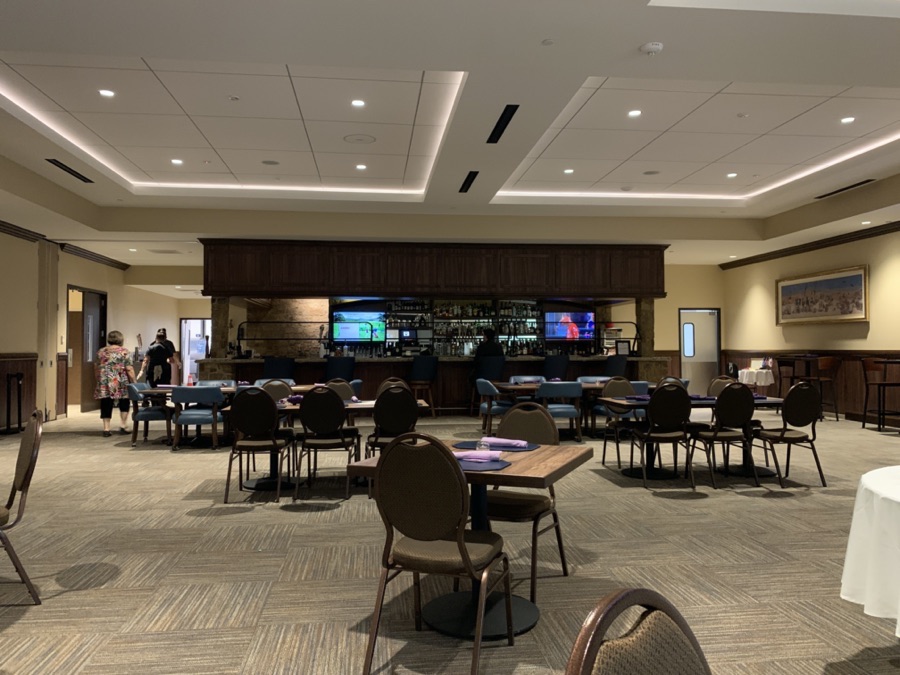 Inside at the Elks!

No Zaitz, what’s going on?  I called, and I forgot they are in Tahoe for a week, not just the weekend.  You see a screen capture of a live video.  Bob and Donna are out walking, and we are out drinking.  I think we won!

Bob was not with us!

We giggled and laughed for ninety minutes!  Great fun! 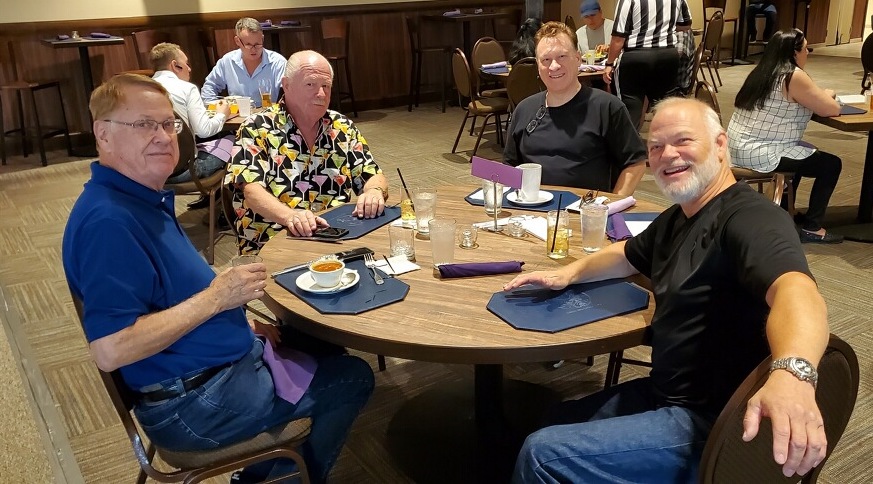 The Gang Of Four, cavorting in a most delightful way!

I ordered the special of the day which was Rainbow Trout and it was excellent. 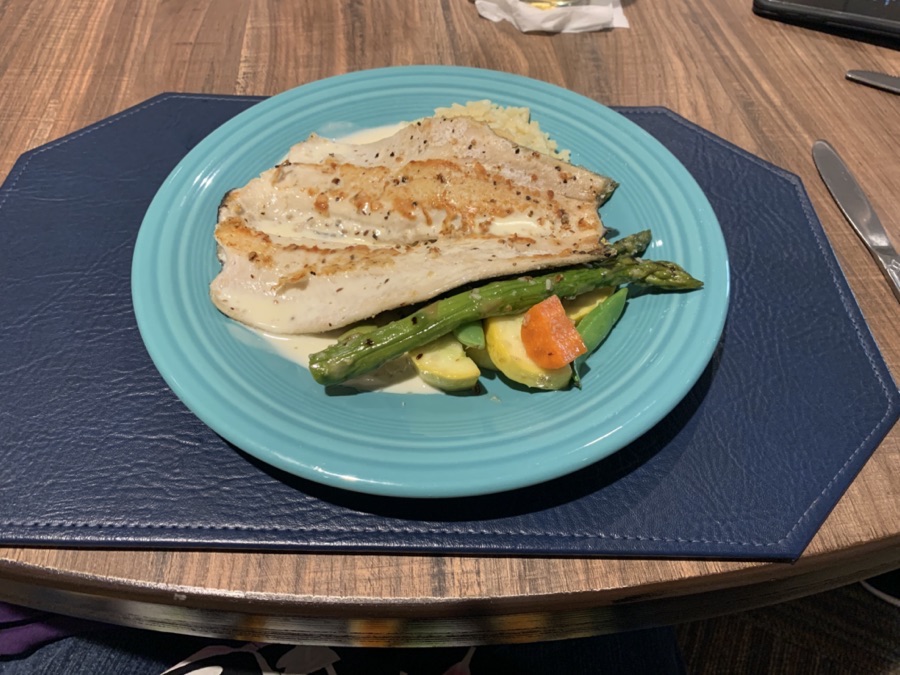 Rainbow trout? It was pretty good.

Mike just got a new hair doo and we thought it was…well, it kind of… but…ah… Hey, mom always said, “If you can’t say anything nice, do not say anything!”. We didn’t say a word, clammed up totally! 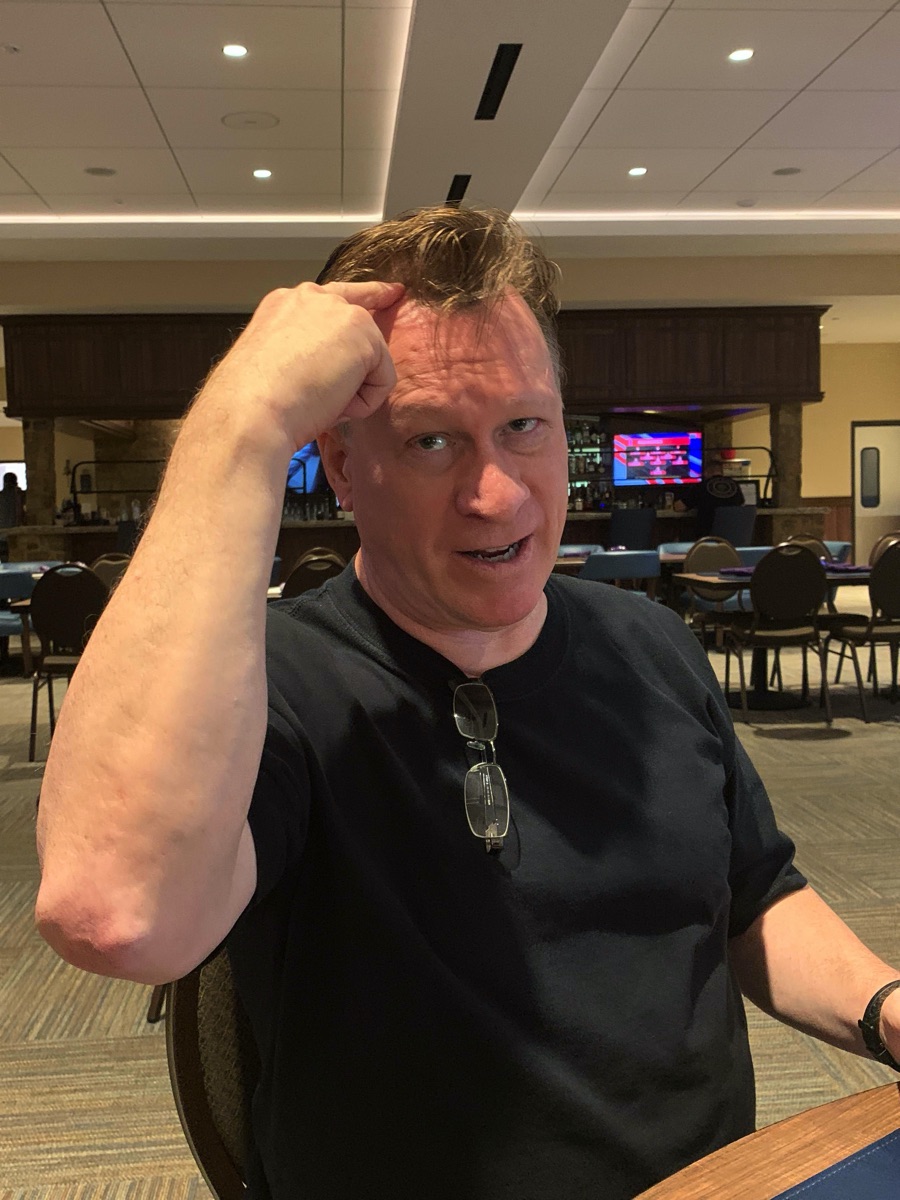 High five, or is that a high ten?  Guess it depends upon how many fingers you count.  John and Bill are having a good time. 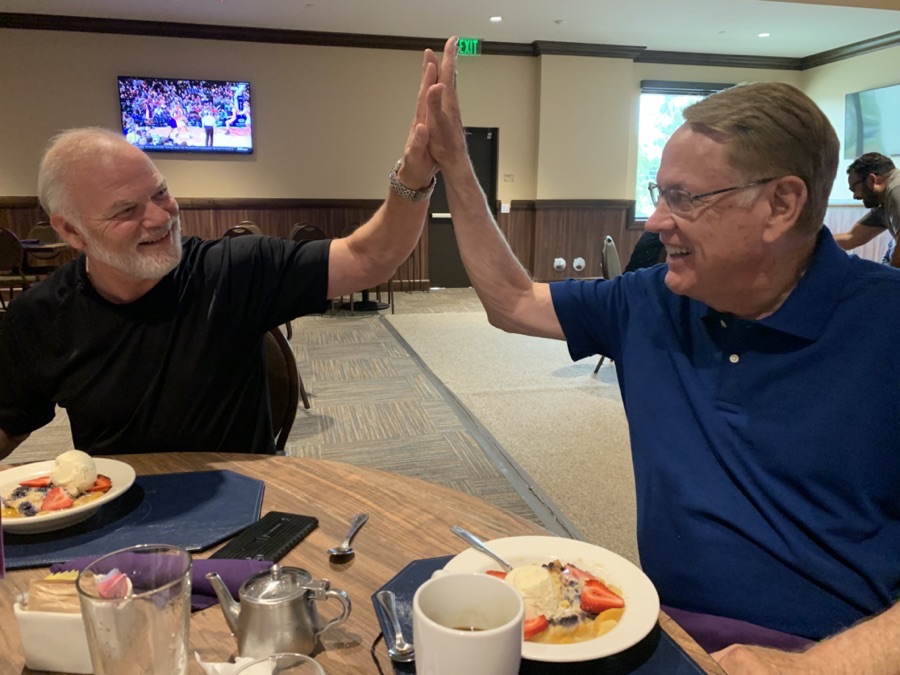 Me, I just enjoyed the visit with the guys.  I get an hour to unwind and attempt to my witty self, sometimes it works and other times it definitely does not!!

Today the order was placed for a “Surprise Me”.  We, Linda brought me a “Skip And Go Naked On The Beach” but, being quite alert, John got a “Skip And Stay Clothed On The Beach”.  The ingredients are: 2?3 cup cold beer,  2?3 cup frozen pink lemonade concentrate, and 1?4 cup vodka. 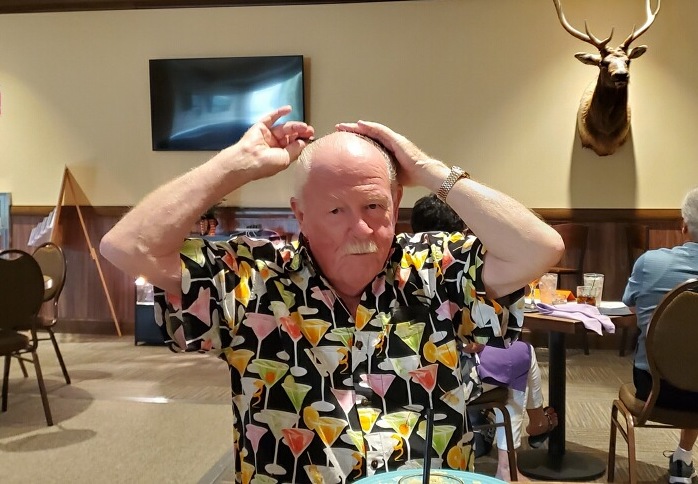 I had to have my serious drinking shirt on today!

In the afternoon, I worked around the house doing the chores.  It is possible I could be the world’s most extraordinary laundry person. I have not made pink underwear in at least a month.

I was thinking about Mary working all day and got a thought, why not tell her I will bring Fish Company’s Rainbow Trout to her for dinner.  She gets to rest, we get to eat, and we both get to visit — smart idea!  I did call, she did accept, and we dined together and visited while watching “Two And A Half Men”, a series I had never seen before.

While I was there, I trimmed her tree that was blocking her kitchen window.  My power shears made quick work of the tree limbs/branches.  I put them in a contractors trash bag, and the job was done in fifteen minutes,

I could see Mary was tired, so at 8:30 PM, I hurried out, and the Ghost and I headed West on the 22 Freeway.  But, the Ghost turned left at Seal Beach Blvd, and I got the hint, we were off to see Chuck. 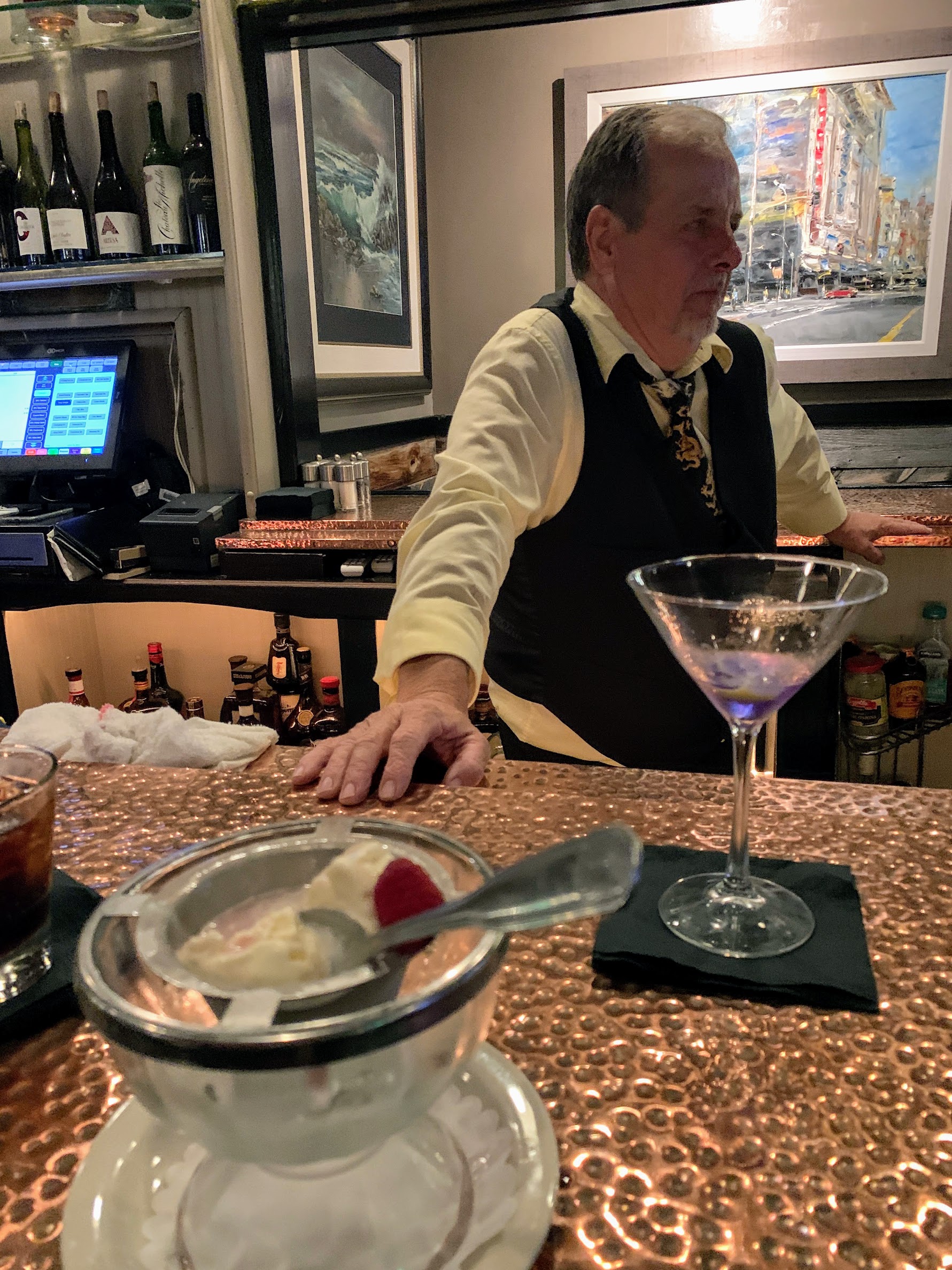 Raspberry Delight and an Empress_1908 was my dessert tonight… I will have to walk tomorrow!

When I got home, I looked at the lovely gift Miss Mary gave me. It was a small book of daily Devotionals, which was very thoughtful of her. The purpose of devotionals is to take a step away from the daily routine and focus on spiritual matters for a while.  In today’s world, that is NOT a bad idea.

Just an old retired guy trying to finish out my last years on this planet loving my best friend and wife, having fun, learning, and passing on helpful things to others.
View all posts by Paul →
This entry was posted in Dining Out, Food and Wine, Friends, Fun, Walking, Working Around House. Bookmark the permalink.