“Grief never ends… But it changes. It’s a passage, not a place to stay.” – Anon

My wonderful bride could make anything in the kitchen.  New recipes were her way of letting off steam after a busy day at work.  We learned about saganaki from Irene, and yes, saganaki is a Greek dish generally consisting of “flaming cheese.”  Well, as you can see below, my beautiful wife recreated the recipe giving a new meaning to “flaming.”  We laughed ourselves silly (once we got over the initial shock), and Sue asked me never to show this picture, which of course, I did, over and over.  Don’t worry; it was an alcohol fire, so the flames lasted two seconds and then was gone.  The camera just happened to catch it at its teak!  Sue was so much fun to be with, laugh with, cook with, do anything with.  I do miss her every day! 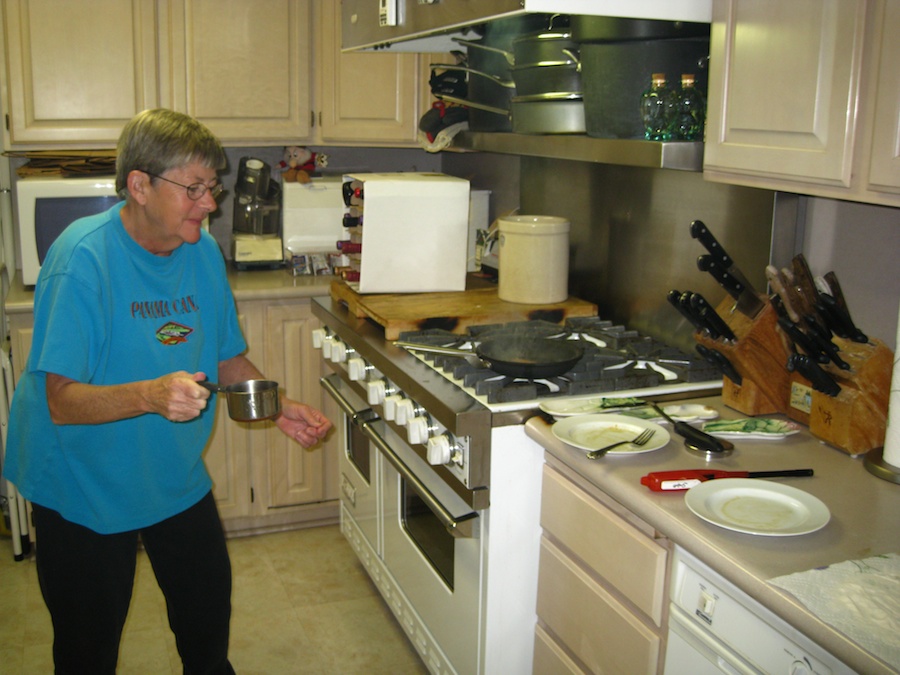 I wonder how much brandy to use in the saganaki? 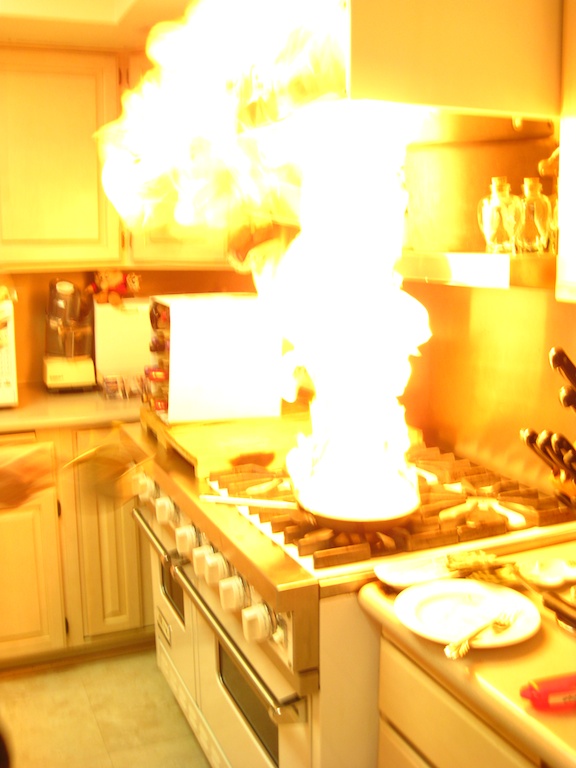 “Perhaps I overdid it!”

For whatever reason, I was hungry, so I made bacon, ham, and eggs for breakfast.  The bread I made a couple of days back was a perfect toast with a drizzle of honey on it.  I needed to call Lee as we missed our call last night because of the power problems I was having.  We talked for a while.  She was preparing for the heat as they were forecasting 90+ in Lake Elsinore.

I heard someone at the door, what could it be?  Perhaps someone with a 1,000,000 dollar check because I had won a contest that I had not entered?  Nope, it was “the pickers.”

The pickers came over Sunday and asked if I wanted to have the trees picked so they could give the fruit to the local food bank, I responded with a resounding yes!  It would be wonderful to have the trees cleaned out so I would not have fruit falling from the trees all summer. There was a grandmother, two granddaughters, and a grandson, and I think their mother in the group. They all worked for a couple of hours. They left many lemons on the tree for me, but they picked clean the grapefruit and three orange trees. They also got the top of the kumquat tree, which was needed. 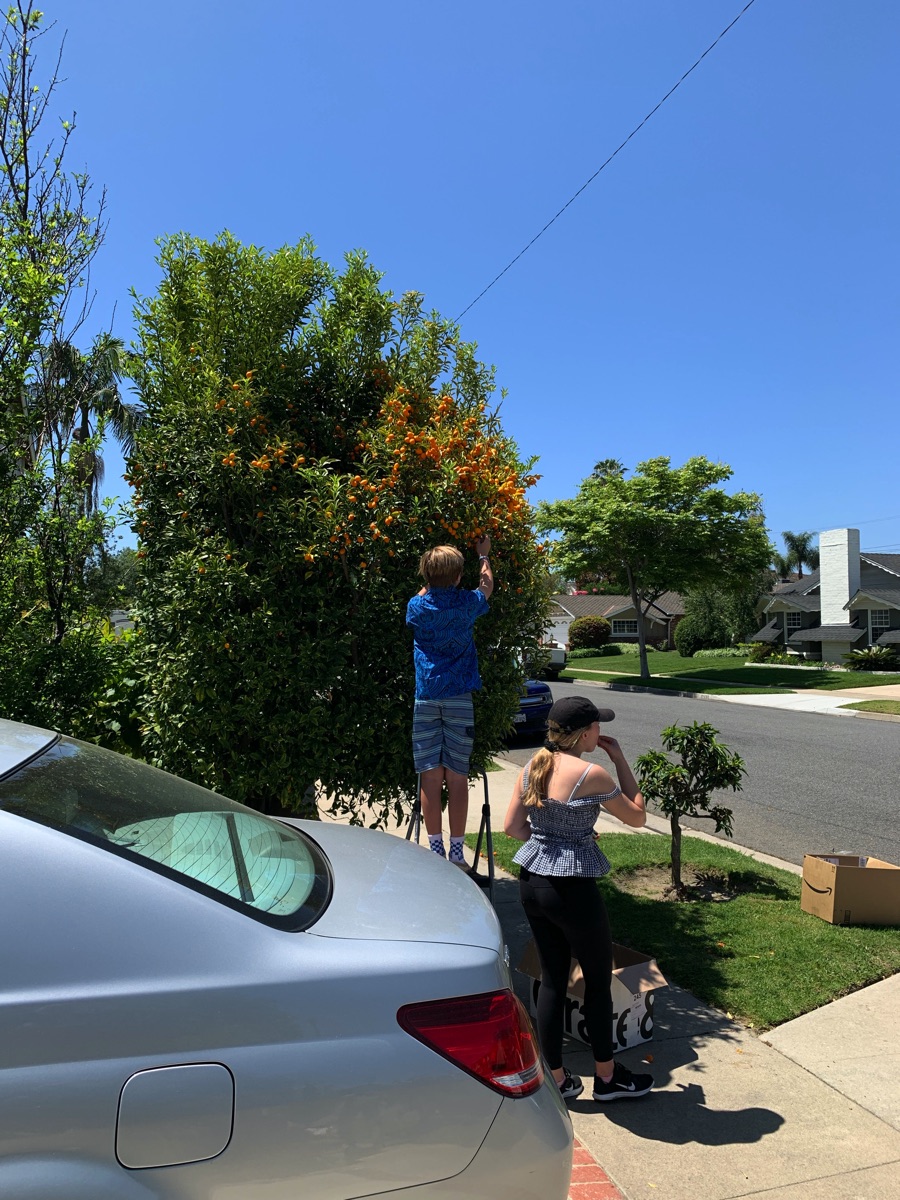 Pickers arrived and went to work!

While they were in the front yard, I got busy putting up the rain gutter and working in the garage.  I fired up my emergency generator, which is an 8KW unit suitable for running the house (less the pool and air conditioner) should they’re we an earthquake.  It would run for four days straight in the event of an emergency.  I also have stashed away a month’s supply of MRE and MRE-like foodstuffs.  Be prepared, and I am! Yes, I do have a camp stove and a sufficient number of chemicals to drink pool water for a month (plus ten cases of bottled water).

The fig trees are beginning to proliferate, and there is a mess of figs forming.  I plan fig jam this year to honor Sue as she loved her figs. 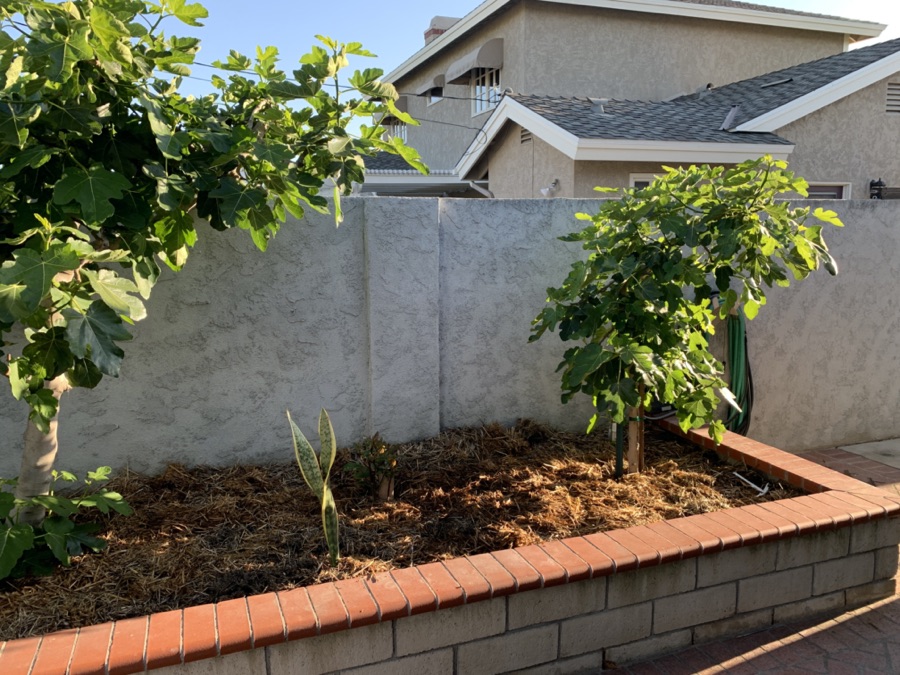 I planted a small succulent (Sword Palm) to see if he would grow as I accidentally knocked it off earlier.  This plant came from Sue’s Mom’s home just before she passed 20 years ago.

The gutter went up just fine (the second time).  I mispositioned it the first as I could not see under the drain when I nailed it, and I put it in the wrong spot.  Dumb me, remember, measure thrice and install once!

Tomorrow’s job is to straighten the walk-in closet, which is fourteen feet long.  The door below enters into the closet and then into the master bathroom.  Donna is coming over to go through Sue’s clothes as they were the same size. Sue has twenty beautiful gowns for our formal dance sessions.  Sue would be happy to see Donna get them, and so would I. 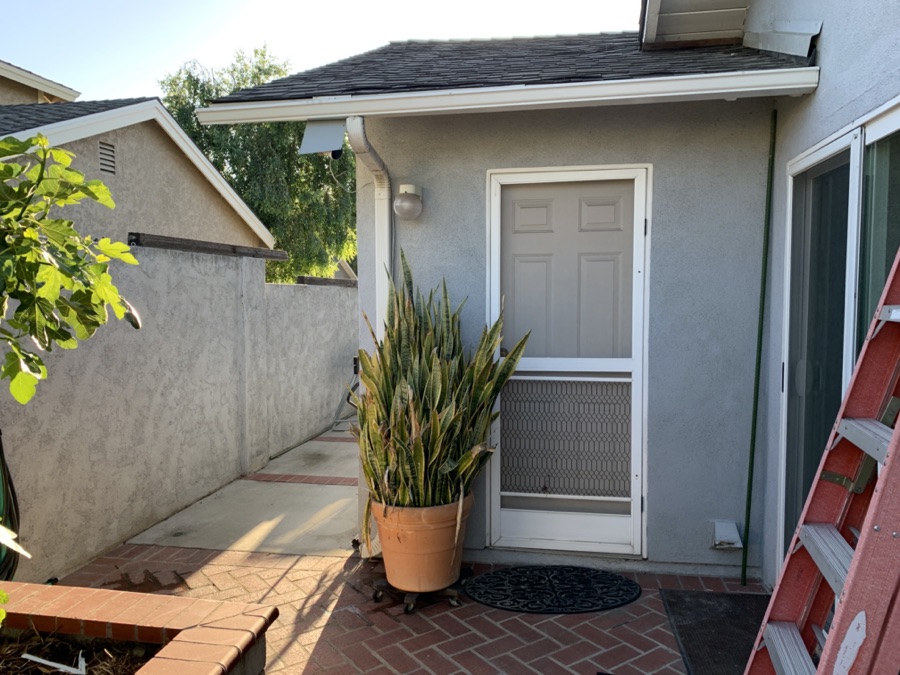 The rain gutter is finally installed, and the security camera is mounted.

The pickers are gone, so I looked at their work. I must say they did a super job, and the grandma cleaned out the dead branches in the trees as she was extracting the fruits.  They cleaned up everything amazingly well.  I should have paid for them to do the work!

While out front, I surveyed the plum tree, my favorite, and it is coming along well.  If you look carefully below, you will see at least twenty-eight plums on the lower branches alone.  The tree must have about 150 plums on it, and I have another along the drive was just as full! 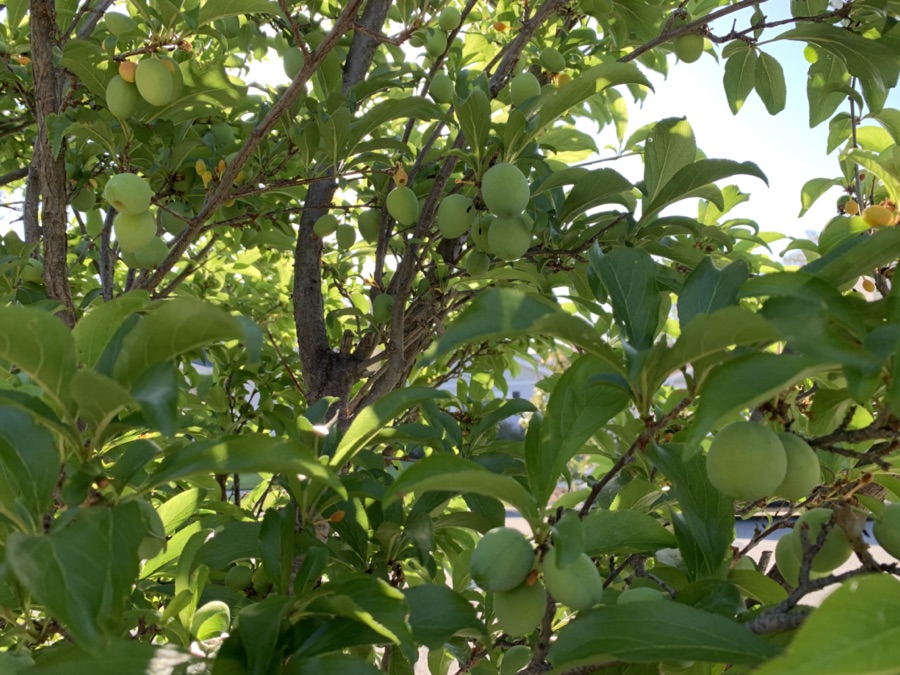 Another month and the plums arrive.

It’s almost five o’clock.  I called Colleen early today, so I would not miss her this evening after the walk.  We chatted for a while before I decided to add another two miles to today’s steps around the house.  Research suggests that, in general, the average North American should increase their daily walking activity to approximately 7,000 – 10,000 per day.  I make it a habit of reaching 8,000/day minimum.

I returned at 6:16 PM and decided the patio would be a great place to rest and let the sun provide me with a beautiful sky and perfect ending to a good day. 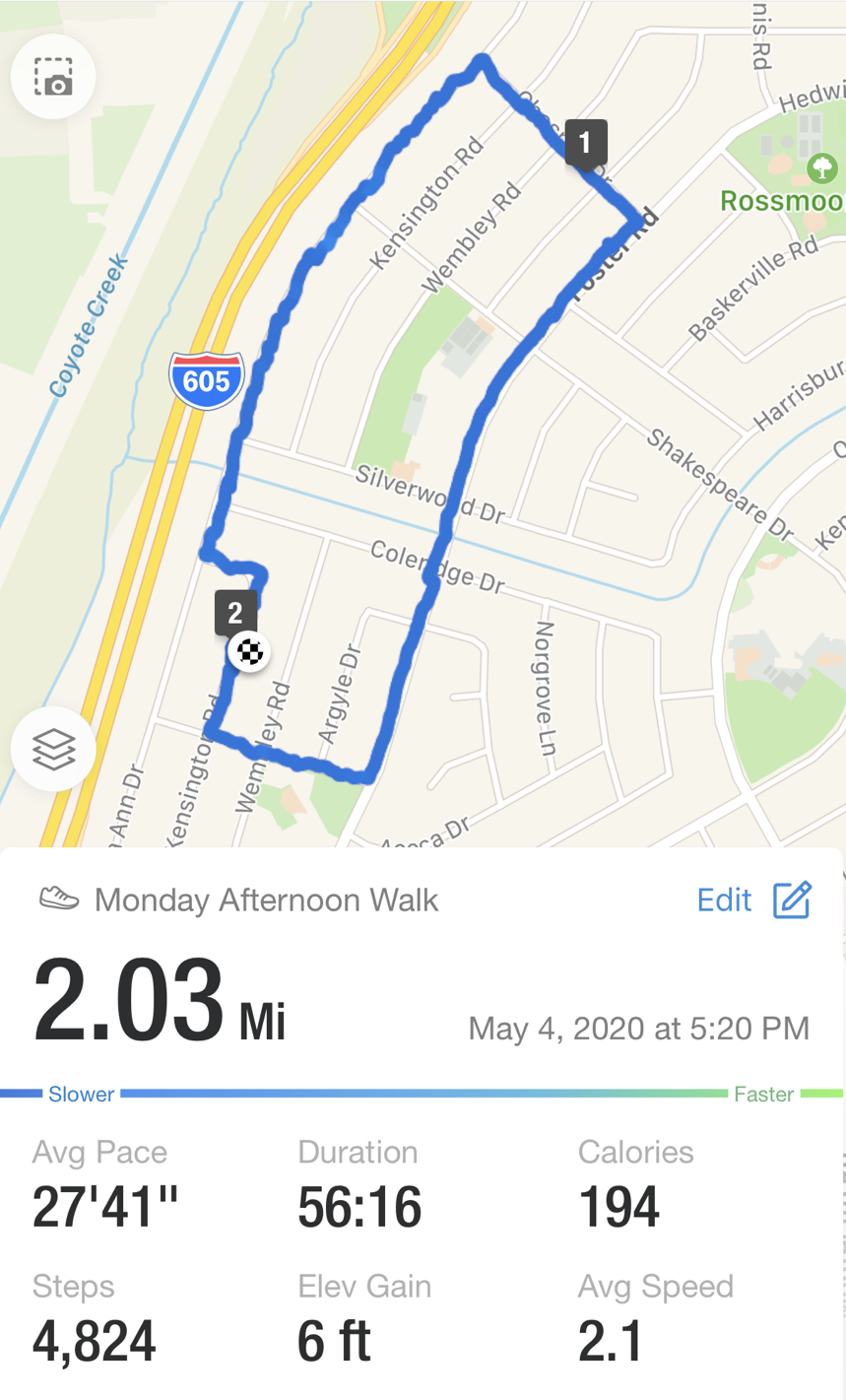 I walked a little slower today as I made my daily phone calls to friends and family, so I was careful. 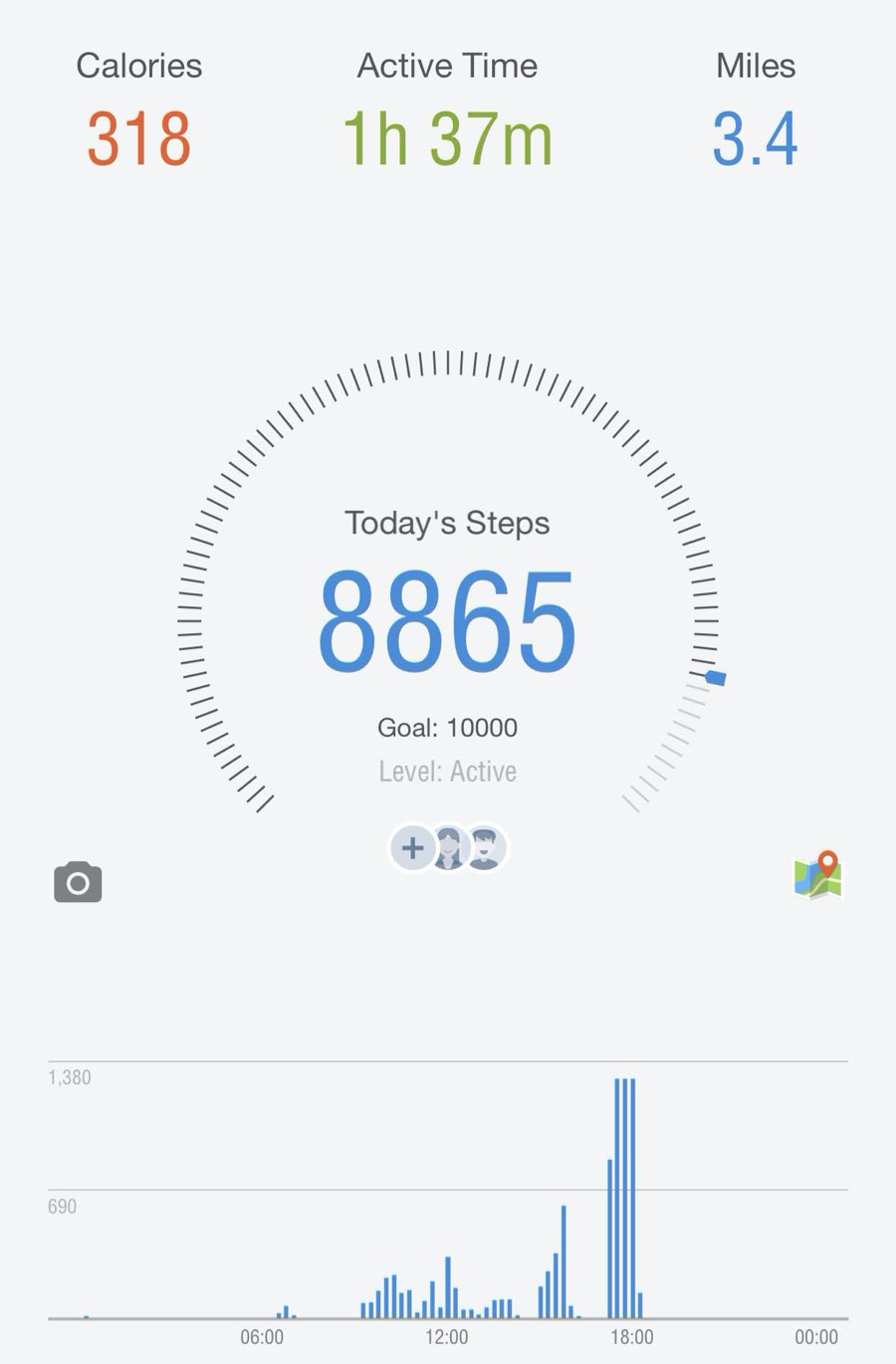 I also walked a couple of miles around the hose, being busy in the shop.

I fixed a drink and cooled off on the patio before going inside and calling Robin to make arrangements for tomorrow’s soiree (OK, dinner party).   We plan to have friends over to a Mexican meal, and then we are going to watch “True Grit,” the original, with John Wayne.

Note to self: Get out the black cowboy hat, black boots, and cap gun! 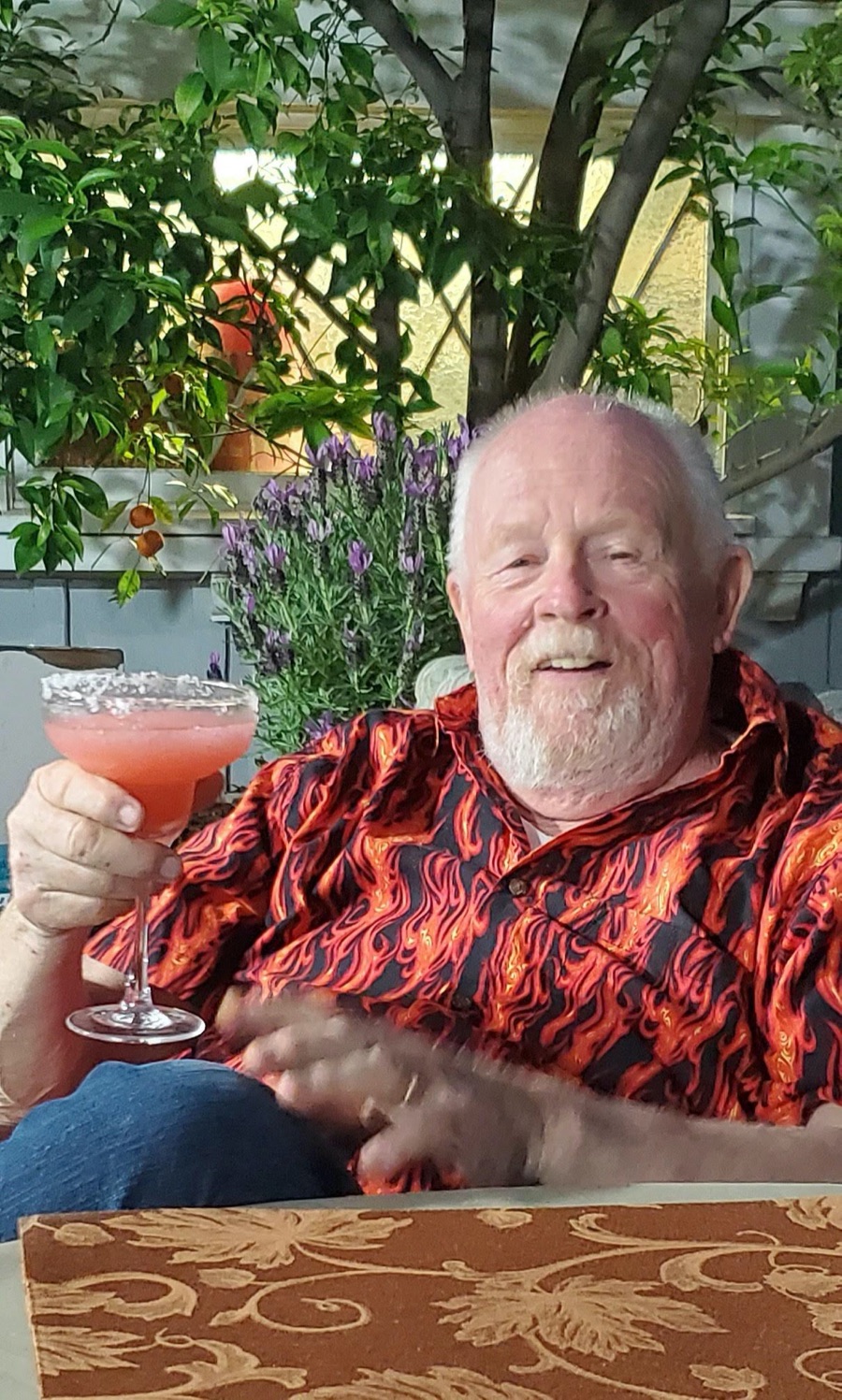 Time for a drink!!

Just before heading to the TV, Zack called and he gave me a guided tour of his master bedroom remodel and it looked super.  I was invited over to see it in person and have dinner on Thursday and I accepted as I believe the flu has about run its course and I will be careful keeping my distance.  I am very proud of Zack and what he has accomplished.

I was not hungry, so I just nibbled on a couple of slides of ham while watching TV and a smattering of the news.  I crawled into the sack about 10:30 PM and fell asleep immediately.