I Am Learning But It’s Slow!

Sue, No matter how hard my day was, but your lovely smile made everything right.

It’s a beautiful day, a day I would have asked Sue if she would like to walk on the pier and count the waves coming in, hear them crash onto the pilings, and buy her an ice cream at Coldstone Creamery. Alas, that can no longer happen, but I can sure think about it every moment. 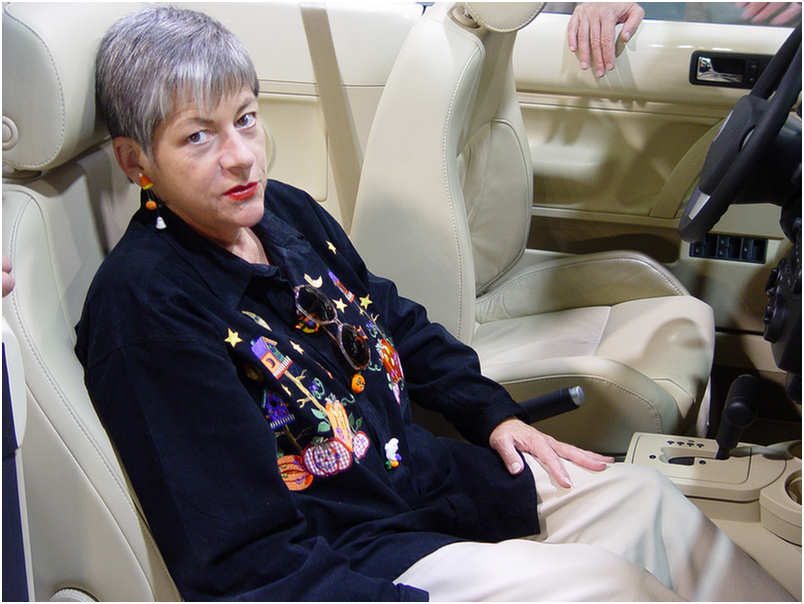 Sue loved the new car shows; we went nearly every year until I was so difficult to walk. She and Zack would sit in every car. Sue loved the gold Chrysler Phaeton.

So,  I am studying cookbooks like mad and decided I needed a FoodSaver device.  We thought about buying one year ago but never really had a need.  Now I do have a need.  It’s hard to cook for one, but I do not mind left-overs.  I bought salmon, but you can’t buy one piece, I had to buy two, and the fillets were big.  So, the vacuum sealer popped into my tiny brain.

The FoodSave 4400 comes Friday, and I already downloaded and studied the manual. I got extra bags, and I have freezer pens at the ready 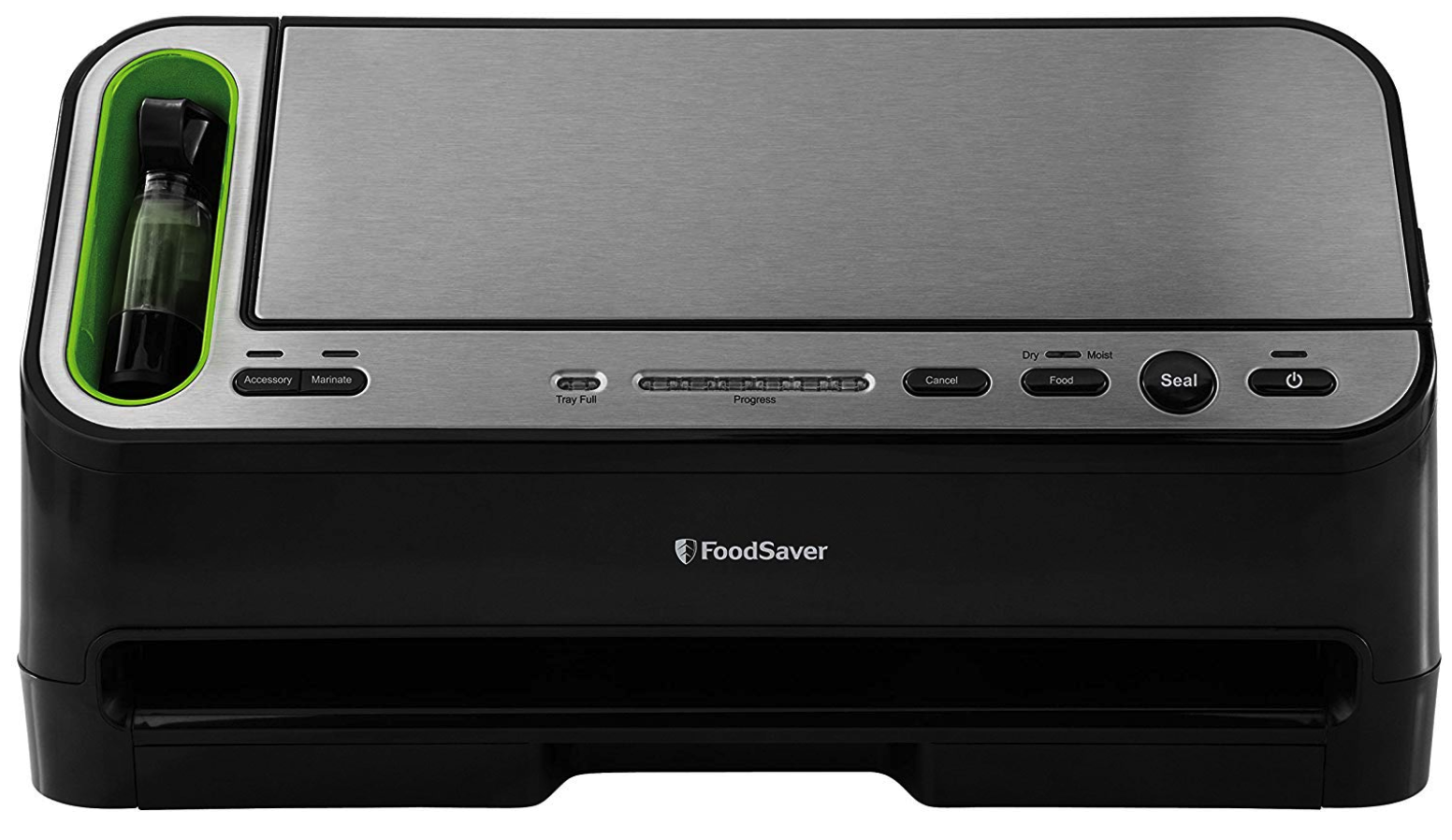 Another gadget to keep me busy in the kitchen. It says it will keep steaks usable for two years and fish for six months!  All I need is a couple of weeks, and it should do the job!

Do not laugh, but I also ordered PJ’s.  I have been cold for the last few days, and it’s probably because of sleeping alone.  I tried sleeping in jeans and a sweatshirt, but it didn’t seem right.  Thank’s to Amazon; I will have fleece-lined jammies tomorrow.

Sue, you were so right; we sure have great family and friends.  I told Colleen I could not find chicken breasts and she called our local Ralph’s and had them put some aside for me, I got them.  When I got home, Rebecca called and also found me chicken breasts, and Peanut is driving them over to our place.  Then Zack called and said tomorrow morning he was dropping off chicken tacos “kits,” all the fixings that Becca is doing tonight delivered fresh at 6:30 AM.  Yes, they asked me over for dinner, but I am going to do the quarantine thing.

Bad news, we got our taxes.  With great trepidation, I carefully opened the package, let the steam out, stood back three feet, screamed some cost reduction chants, and then slowly I opened the folder.  I was quite shocked! Oh well, it is what it is!  I tried to give the package back to the mailman, and he would not take it back. Poo!

So, I cooked! I did, I did!  All by myself. Sue would have been so proud.  I made beef stew in the crockpot/pressure cooker.  I learned a lot, and I guess one learns every time one cooks.  While following the recipe, I could hear Sue and her Mom saying, “Everything is approximations, don’t worry about being precise.”

So I begin making two pounds of meat from the four the pounds I started with, I had no idea of how much was needed! 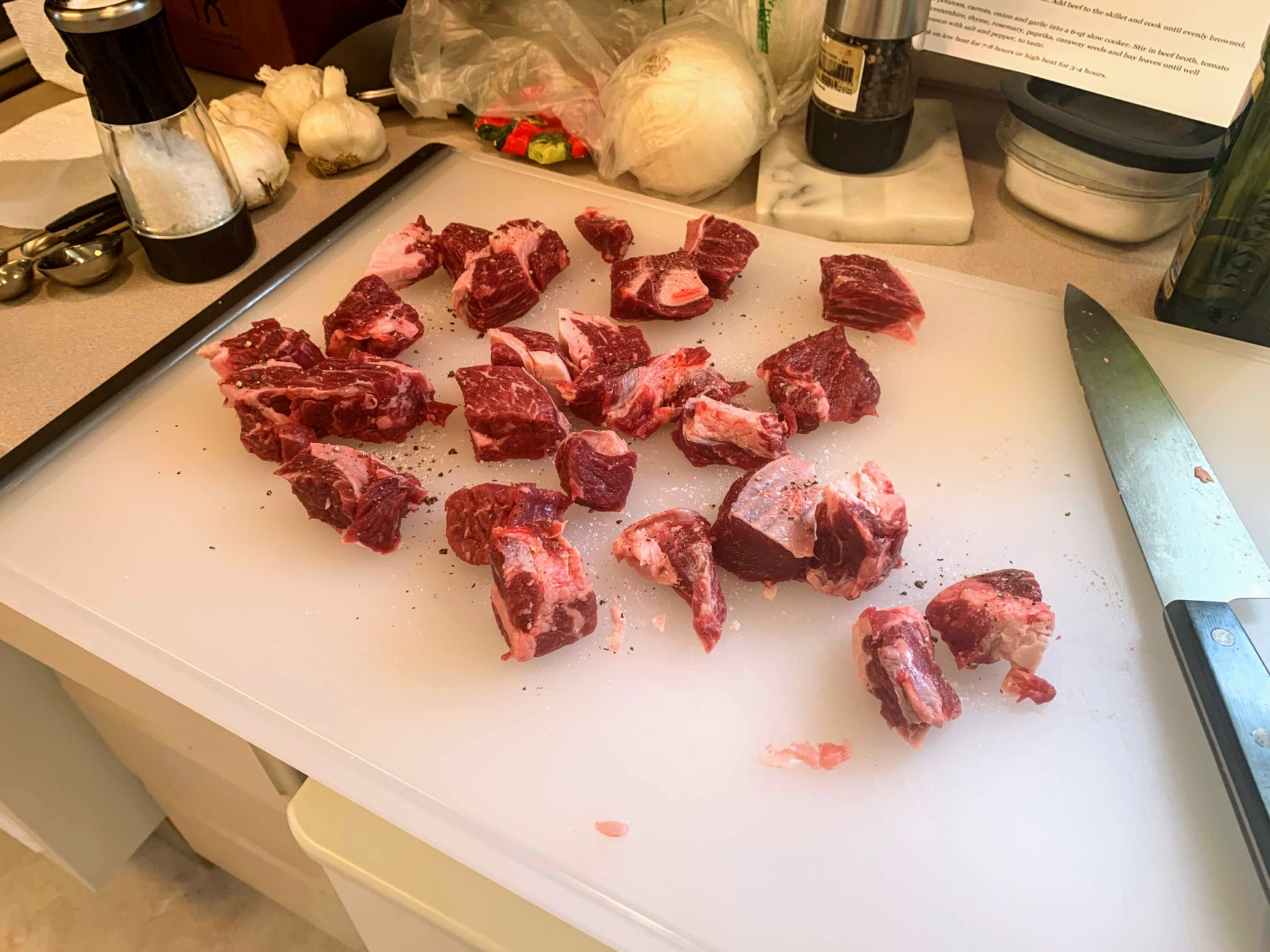 Chopping up the meat was new to me!

Then it said brown the meat? Huh? Where is the paint? What brown. Thank goodness there was a picture. 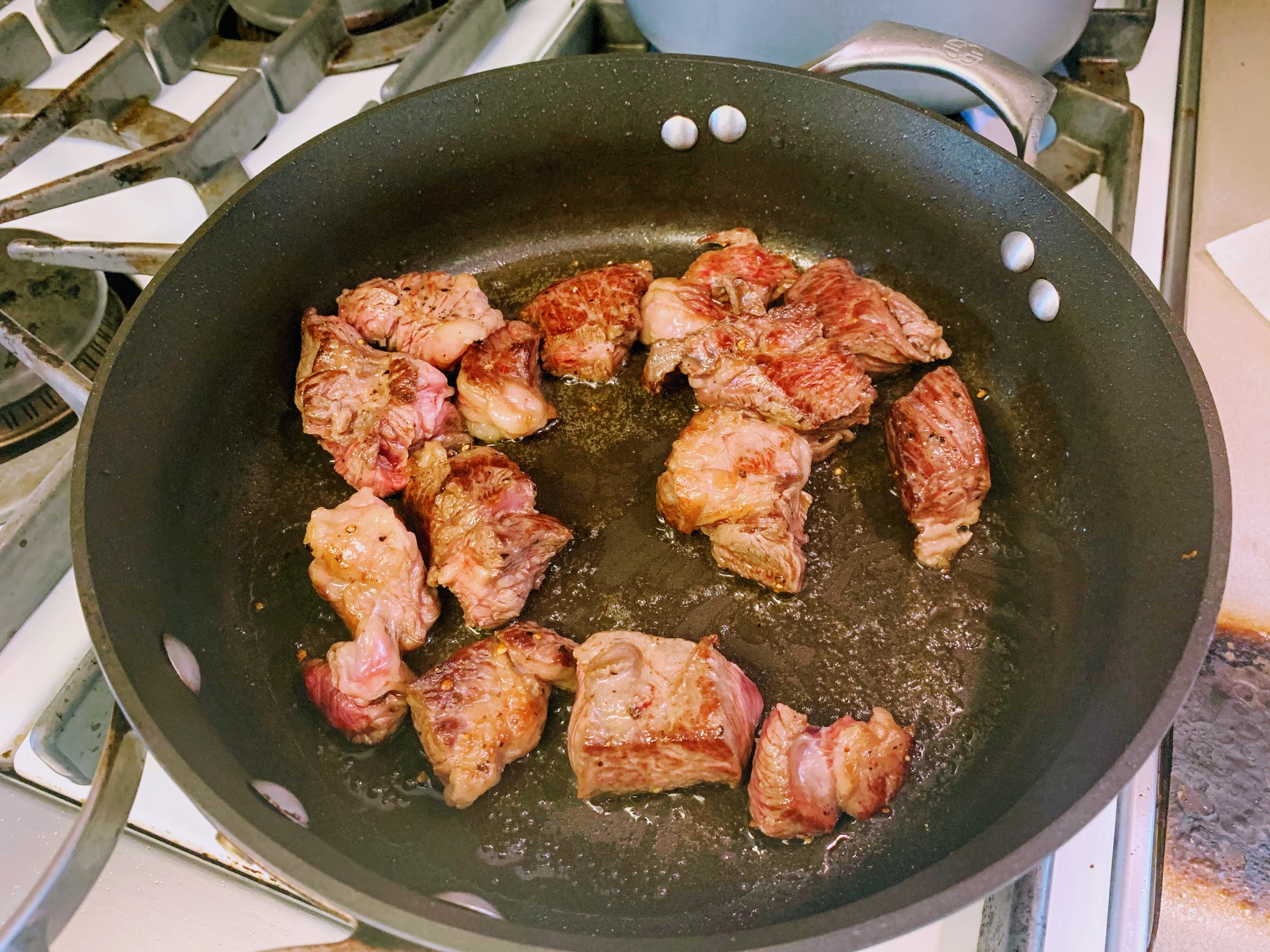 Brown the meat? OK, I got it brown all over! About 2 minutes per side!

Then I added all the rest of the goodies, potatoes, onions, bay leaves, pepper, salt, and other stuff.  All went into the pot, and it was sealed up and set to cook on high for four hours—time to rest.  I called for a staff meeting with Vicky! 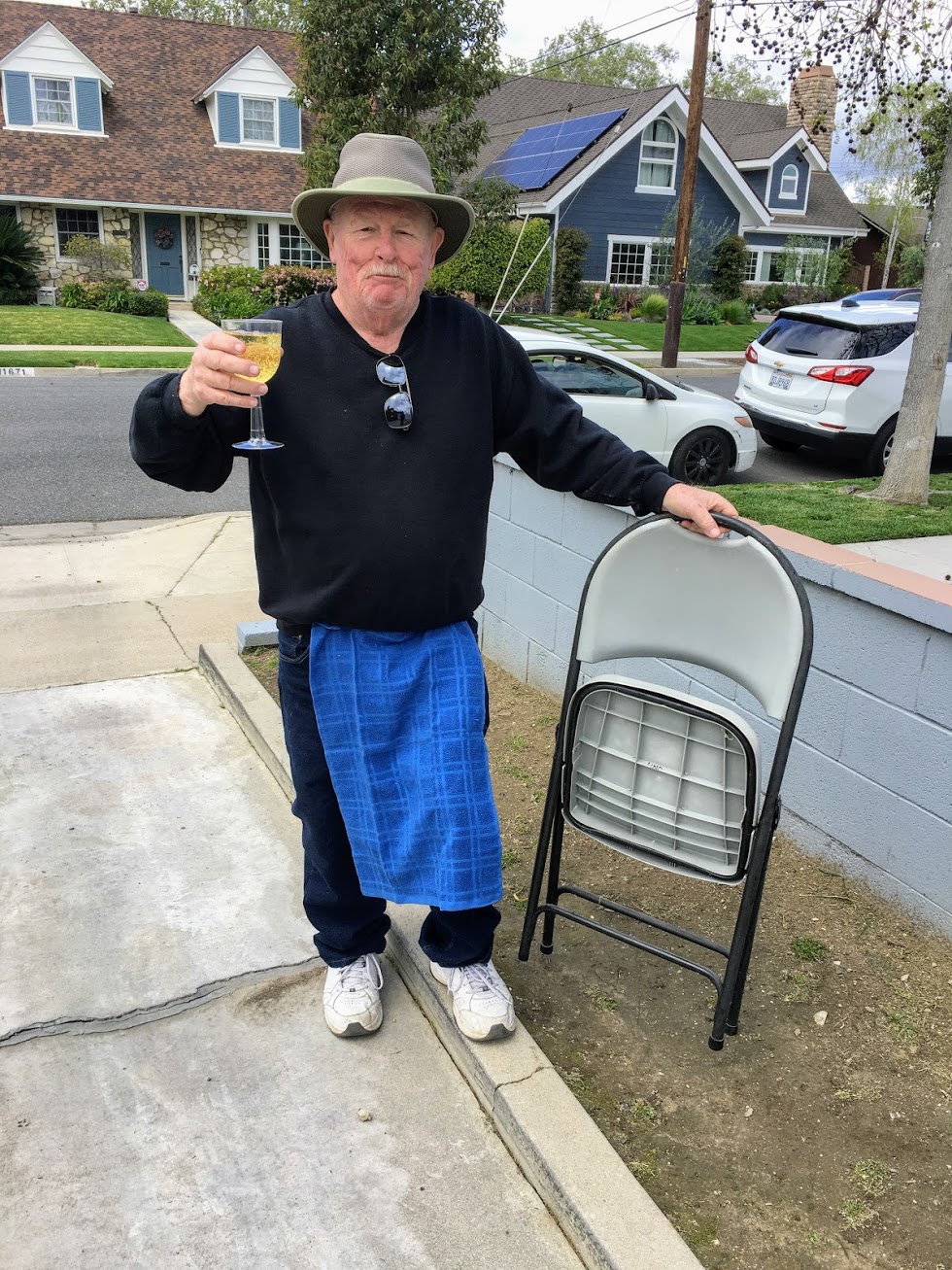 I forgot I was wearing my kitchen towel, no wonder Vicky was laughing so hard! The champagne was from Sue’s stash of non-alcoholic drinks!

We chattered for forty-five minutes, had a rainstorm go by, and then I departed for home a whole 40 steps away!  My iPhone told me I had three hours to wait.  The crockpot is connected to the internet so I can control it from anywhere! I had some time, so I decided a walk was needed.

Off I went down the street with a full head of steam.  I wanted to be back by the time dinner was done! 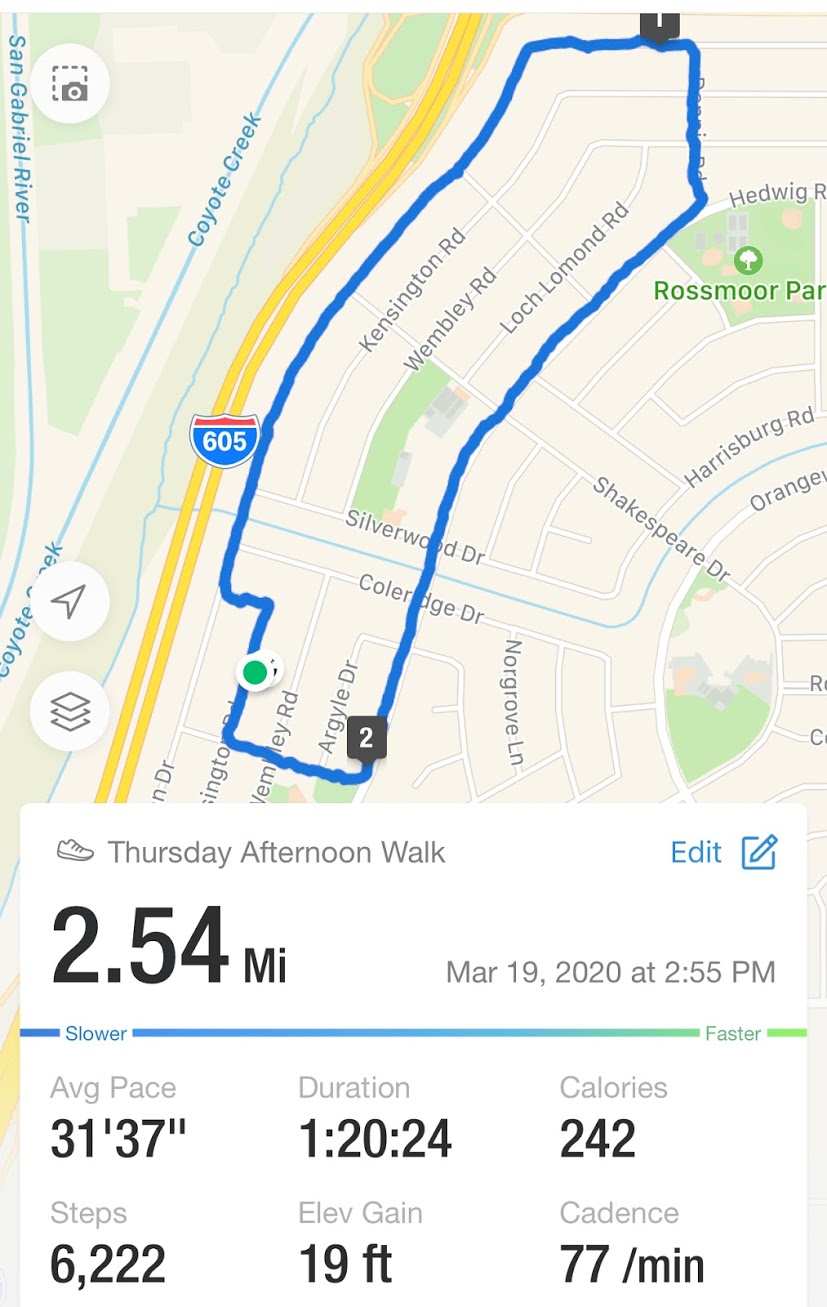 Time for a walk and a walk it was!

Now, it is about dinner time, so I opened up the pot and used a little thickener before plating the results.  If it tastes as it smells, I got a winner! 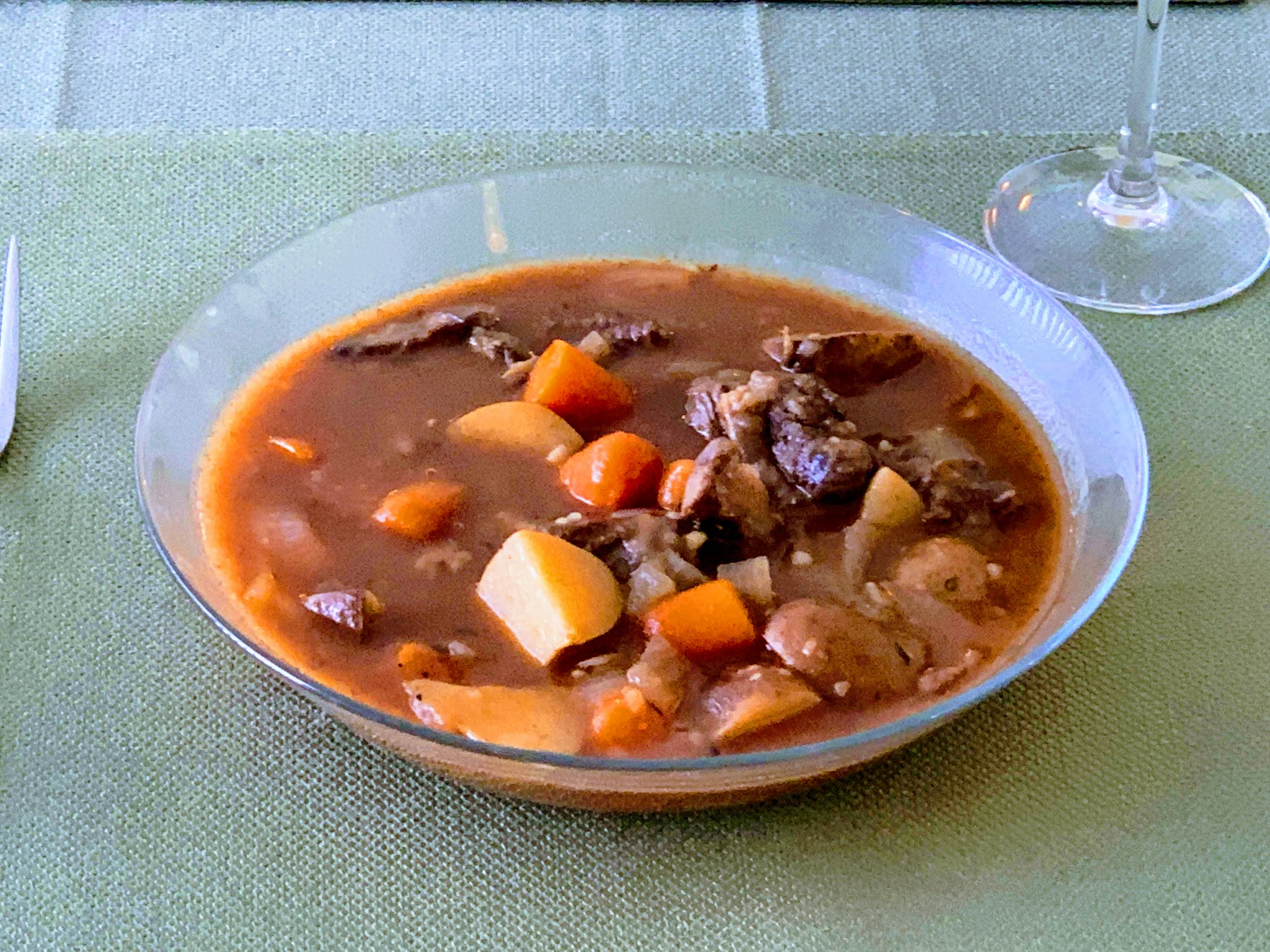 I set the table and even had a green spinach salad before putting down the stew.  Pretty good for a guy who never cooked before.  A little lonely, but it was OK. 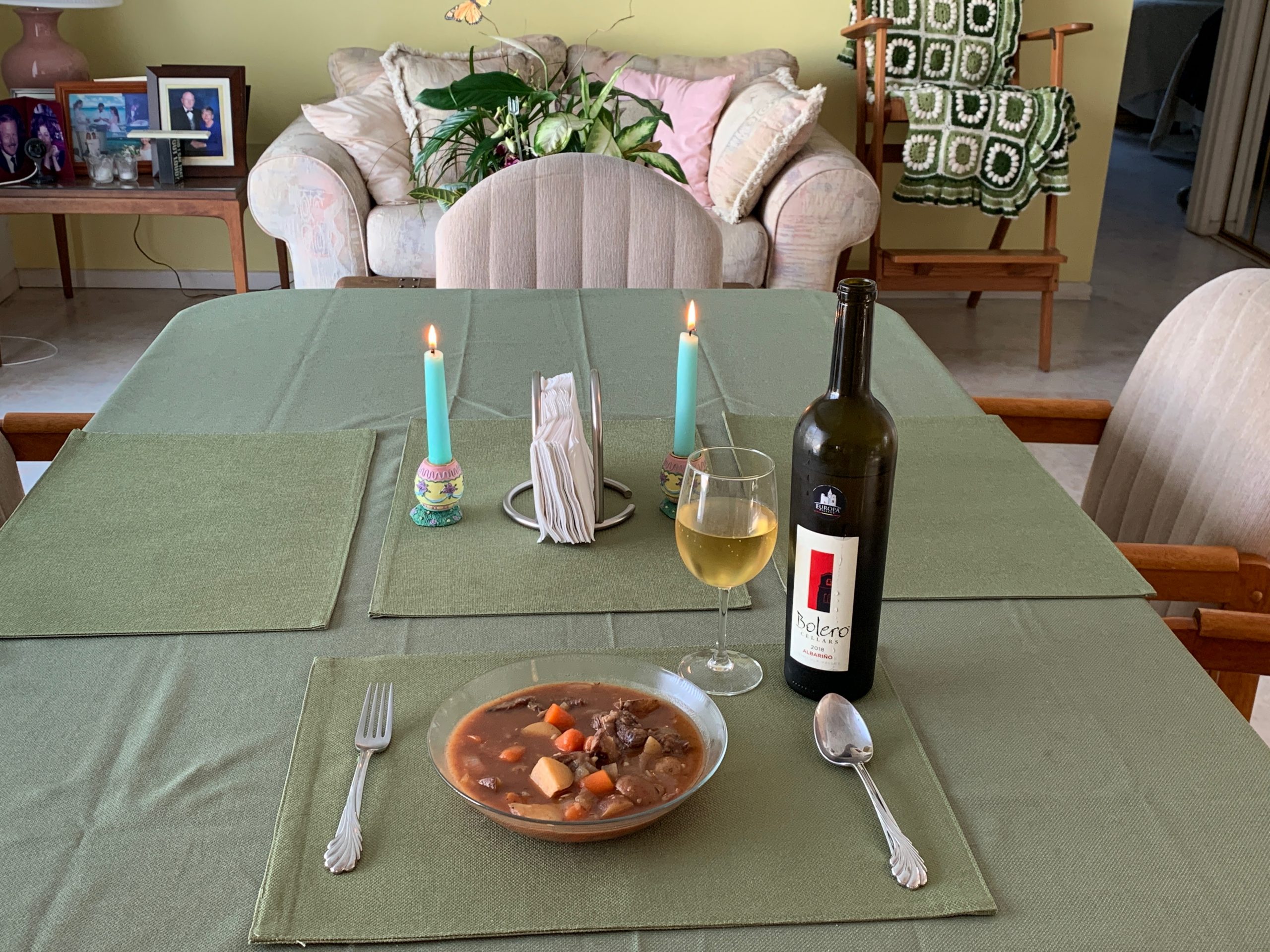 I even fired up the candles; Sue would have approved!

After dinner, I used the Bat Phone and checked in with the kids/grandkids.  Now they tell me the entire state is to be battened down, and I see cabin fever shortly.  Thank you, kids, for calling the ol’ man and checking on him!

I am doing “OK,” but not having Sue to lean on and talk to and hold is just very painful. Grieving is not easy.

Just an old retired guy trying to finish out my last years on this planet loving my best friend and wife, having fun, learning, and passing on helpful things to others.
View all posts by Paul →
This entry was posted in Cooking, Friends, Walking. Bookmark the permalink.