Slow Days Are A Pain So We Sped It Up!

We didn’t do much today.  We are the newsletter and secretaries for two dance groups.  Every other month the dances are day apart so we have to prepare the materials and mailings for two clubs! Today was that day.  We printed about 130 copies, made all the mailing labels, and got everything ready to go for Sunday’s “stuffing party”.

Sue made an absolutely terrific shallot dish from our own shallots!  She added some magic and cooked them and wow they were amazing!  If she keeps that up,  who ever needs to go out to lunch???  She got the idea from the internet…  Love that internet! 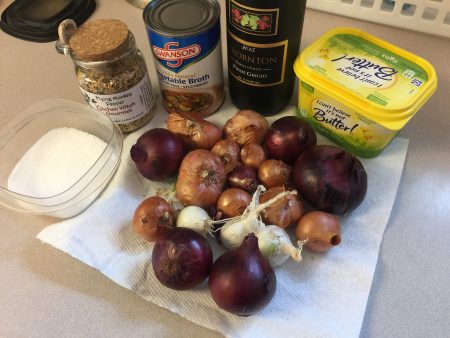 Pure magic! Except for the small amount of protein, it was a meal in itself!

We got cleaned up and headed for the Himalayan Grill to make arrangement for tomorrow.  Our new Halloween tradition is to go to the Himalayan Grill (just like last year) before we cut up the pumpkins.  The food is fantastic and there is plenty of vegetarian options!

Did you know: Christy’s Minstrels, sometimes referred to as the Christy Minstrels, were a blackface group formed by Edwin Pearce Christy, a well-known ballad singer, in 1843, in Buffalo, New York. They were instrumental in the solidification of the minstrel show into a fixed three-act form.

Then…. Home!  Star Trek was calling on sub-space radio! We watched two episodes this evening.

Episode 19: Set in the 22nd century, the series follows the adventures of the first Starfleet starship, Enterprise, registration NX-01. In this episode, a group of interstellar alien thieves knock out the Enterprise crew and begin looting the ship. Commander Charles “Trip” Tucker III (Connor Trinneer) is the only one left to stop them.

Episode 20: The crew is directed to a barren planet, where a derelict ship may be salvageable for supplies. However, the crew quickly learns that rumours about the shipwreck being haunted may be true.

Just an old retired guy trying to finish out my last years on this planet. I lost my best friend and wife in early 2020. I was blessed again by reconnecting with Dr. Mary Côté, a long-time friend. Mary and I got married July 28th, 2021, and are enjoying life together and plan to spend the rest of our lives being a blessing to our friends and family.
View all posts by Paul →
This entry was posted in Fun, Theater and tagged CCPA, Happy Hour, Theater. Bookmark the permalink.