Everybody Loves A Parade!

Did you hear about the guy who lost the left side of his body? He’s alright now.

Today is a big day, so I began early by washing the car, getting ready to be the Pied Piper of Los Alamitos!  We are celebrating Del’s 95th birthday with a drive-by parade!  Yeah!

I called Mary around 10:00 AM to see if she wanted my company a little early, and she did. The Silver Fox and I again headed West into the sun arriving in Orange about 10:40 AM.  On the way, I did a lot of thinking about life in general, and my family and friends.  I was sent this video a while back, and it seems appropriate here.

I hope that I leave good memories behind when it is my time just like dear Sue did!  I will redouble my efforts to do just that!

Mary had the coffee ready when I arrived, so it was time to get the heart started.

We walked Scout as we knew we were going to be gone for a while.  Around noon, Mary got ready for the drive-by, and we headed for my house, arriving there at about 1:00 PM. I got the map Vicky had left in the garage, and then we went to Sprouts Market at 2:00 PM as we are the pied pipers for the event. Mary unwrapped the checkered flags Vicky had provided and was ready to go at 2:00 PM.

By the time 3:00 PM came around, there were probably sixty cars plus several CHP patrol cars and five CHP Motorcycles.

The CHP led the parade and did a presentation at Vicky and Del’s place. 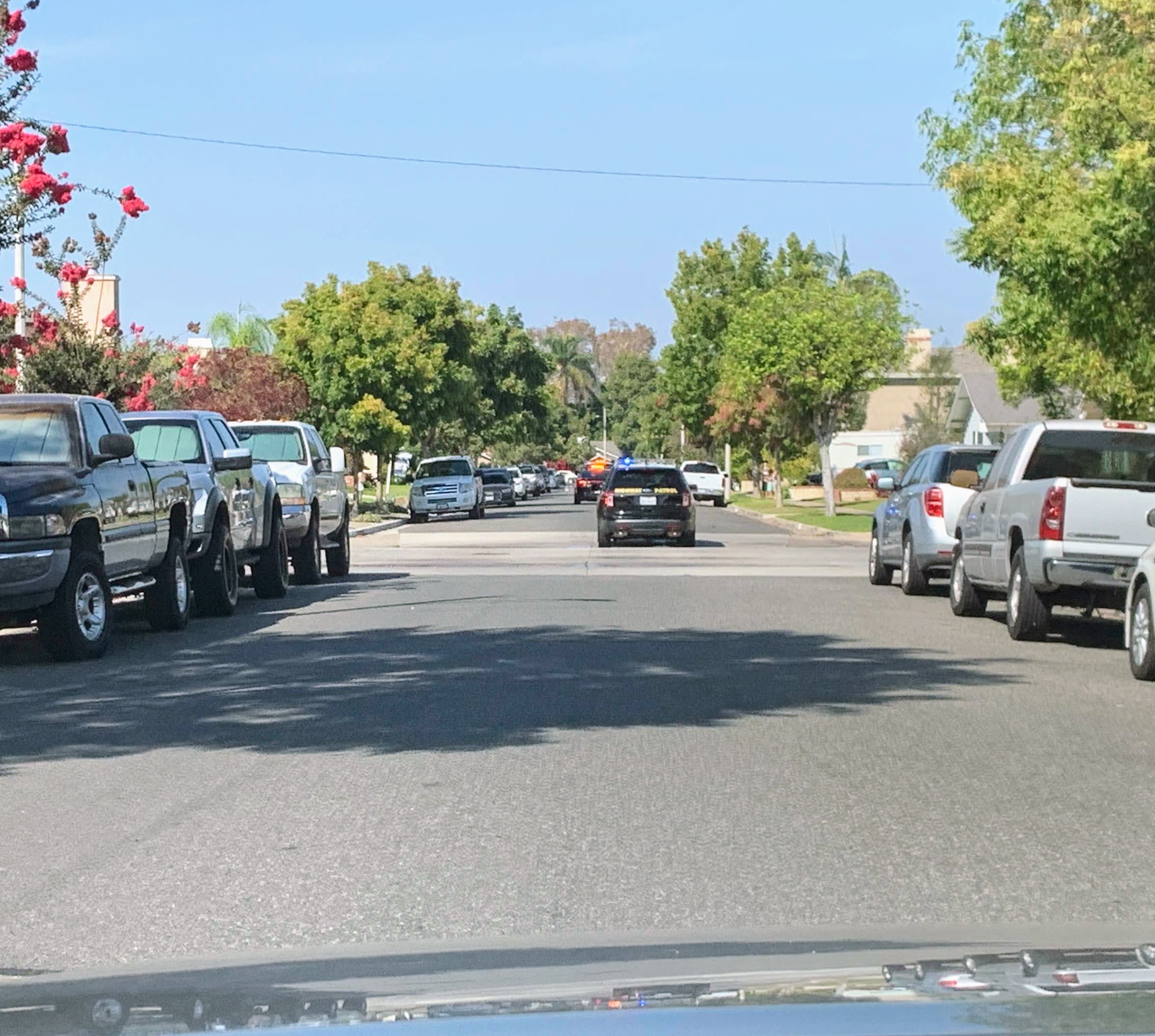 My talent for going under the speed limit was shown to be a good one; I did not get a ticket!!

I did not take pictures because I was driving, but my son Joe did, Ed Roberts had the camera going, Bob Duda was taking videos, the affair was well covered.  A web page is coming shortly about the event.

Joe had tried to arrange a drone coverage, so he brought a friend and all the equipment, but Joe could not get clearance from the FAA, perhaps to close to the Join Forces Training Base? 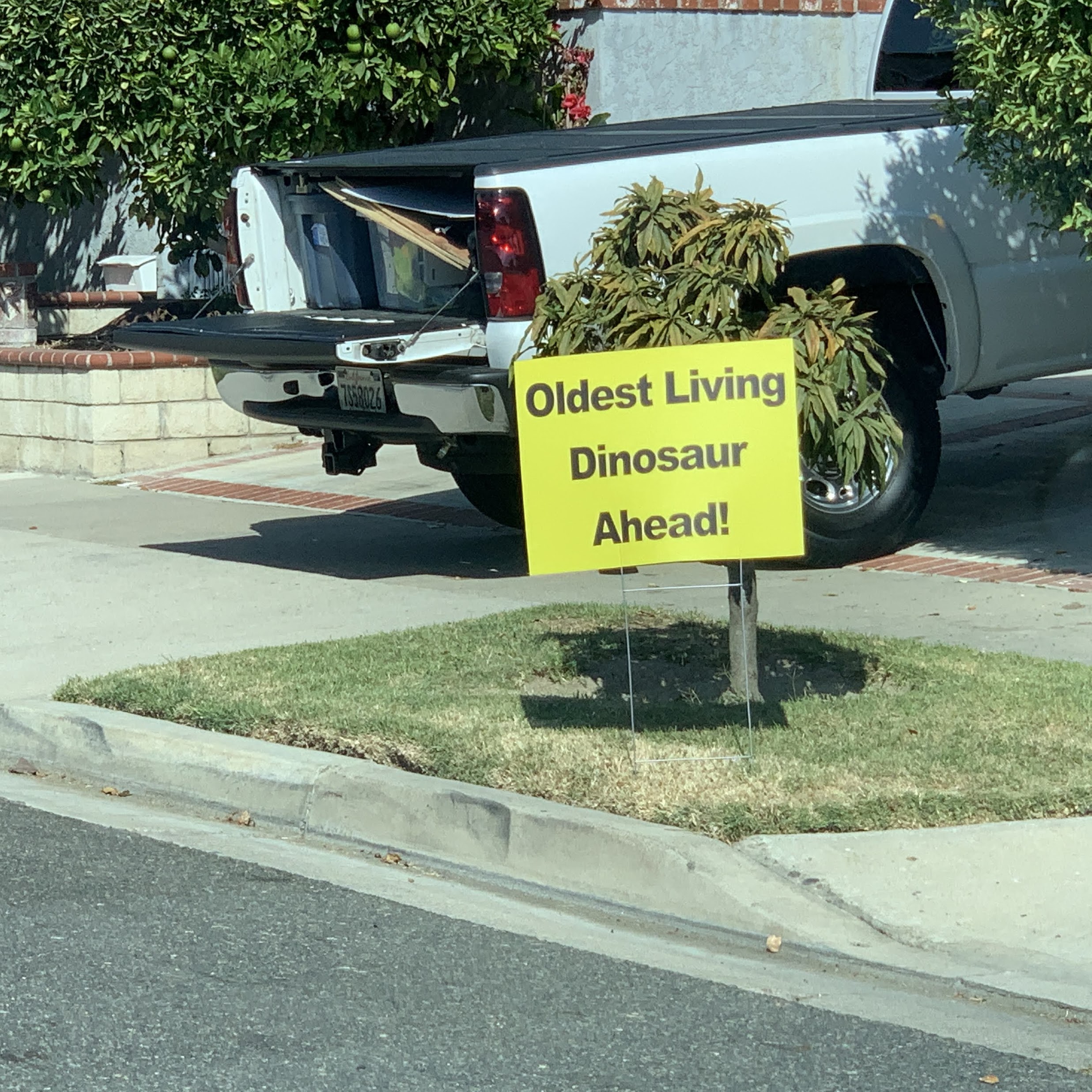 Irreverent as usual but NOT unexpected.

The guys did a demo and presented a new CHP motorcycle safety helmet to Del.  They parked and watched all the cars go by slowly.  According to instructions, we went several blocks away and circled back so the other side of the vehicle could wave and visit.

There were so many cars that we met at the back of the parade!  Oops!

BTW, the second CHP officer to the left of center is my cousins youngest son! 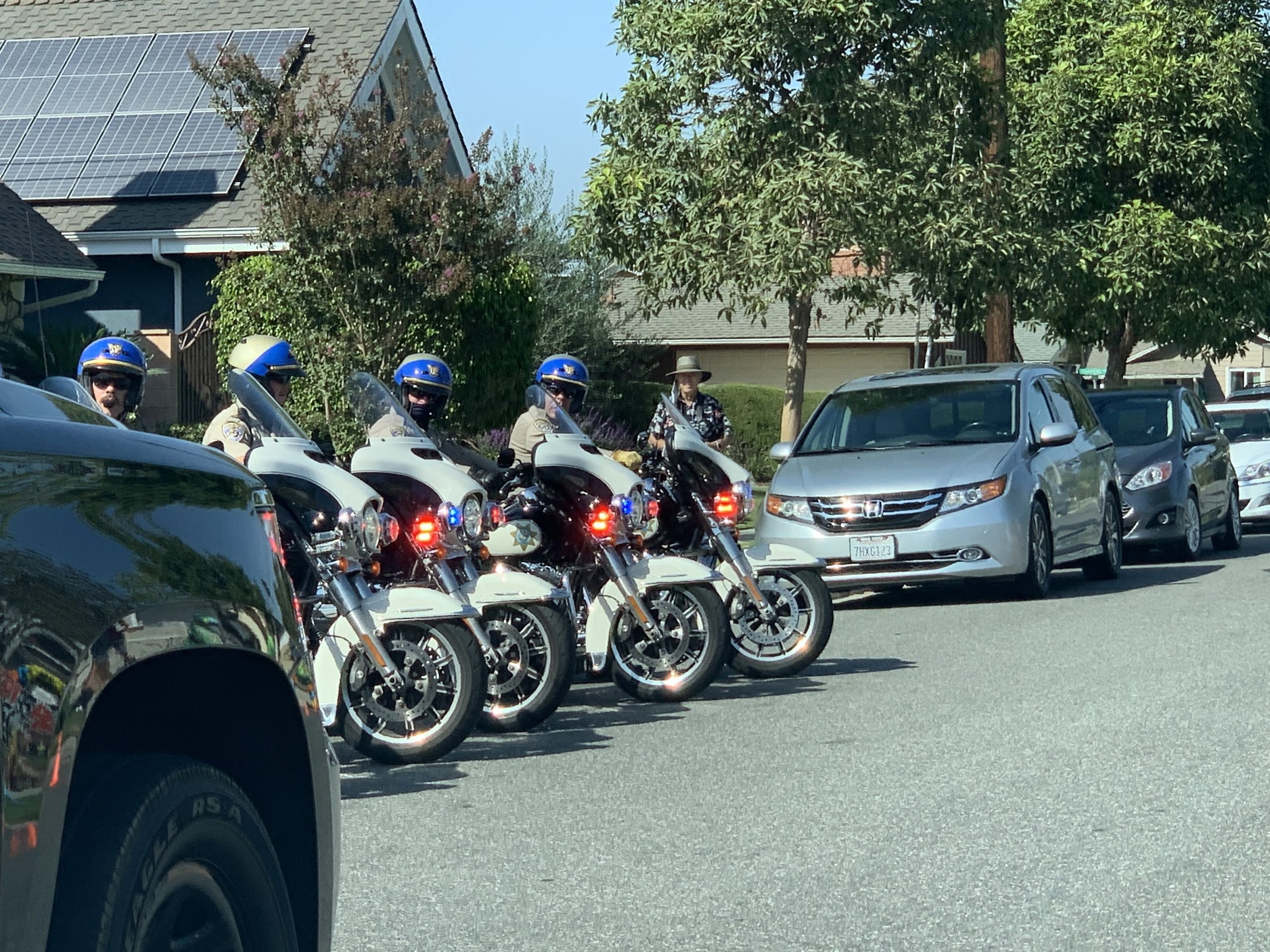 A motorcycle demo was provided, and Del got a new CHP motorcycle safety helmet as a gift from the CHP contingent!

I think Del had a great time, smile from ear to ear! 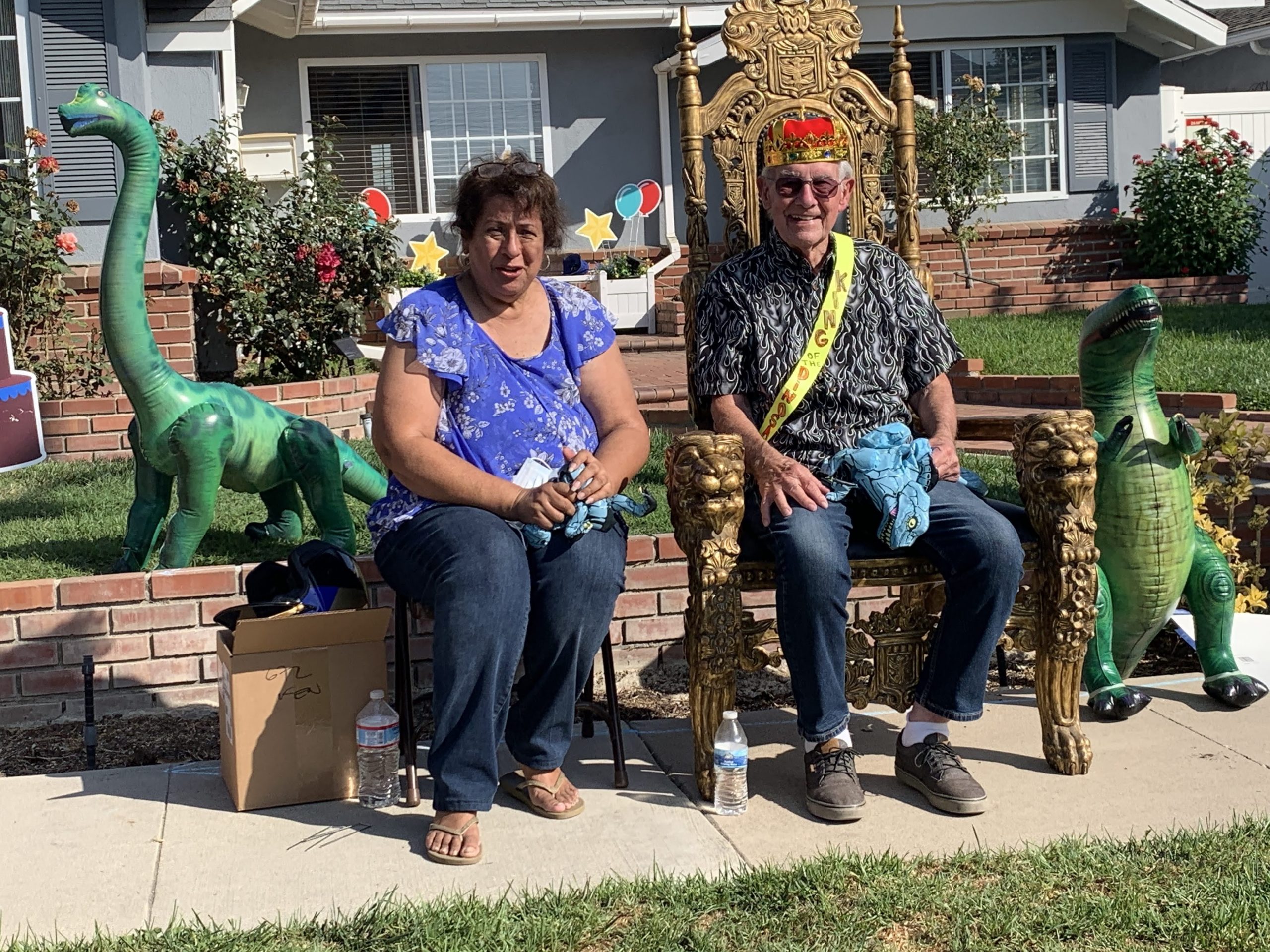 The King and Queen are holding court! 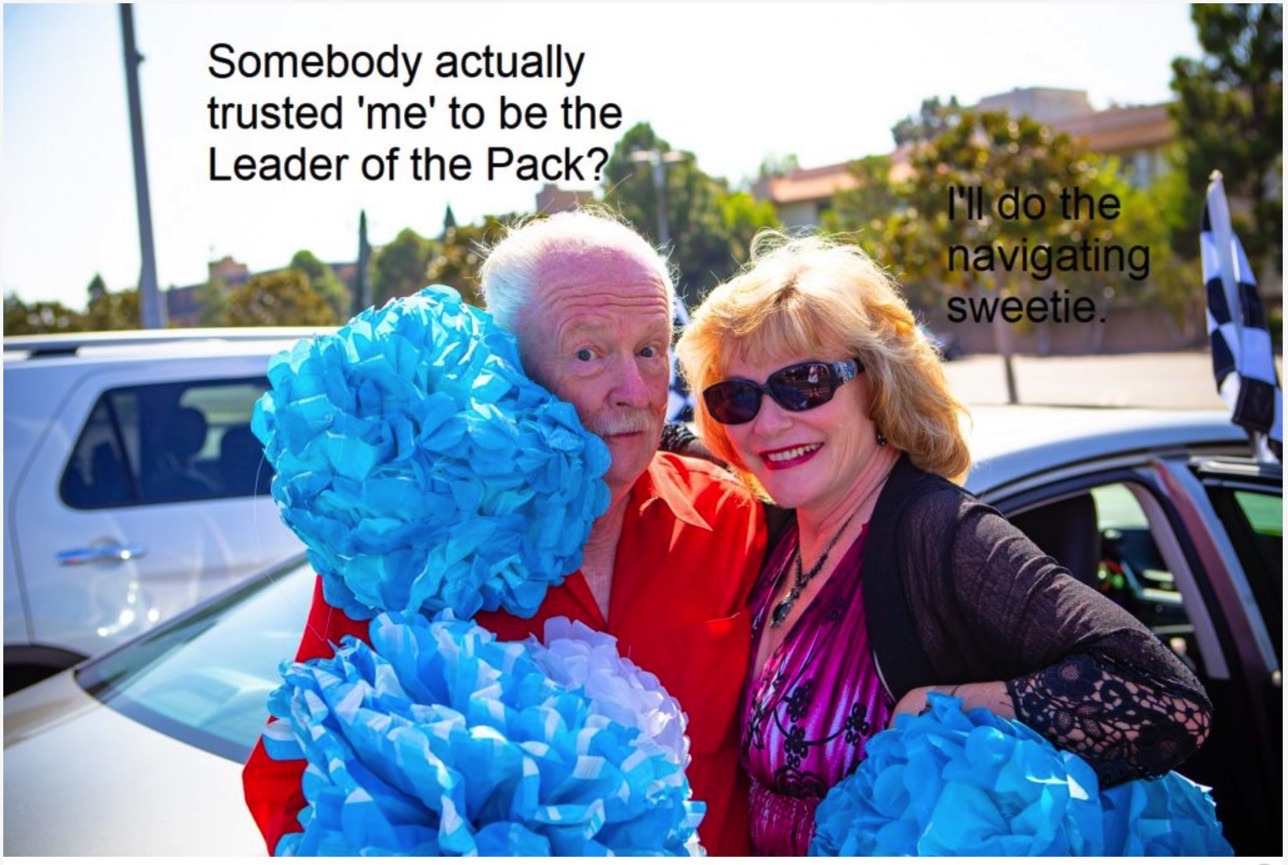 Mary was my navigator!

After the drive-by, Mary and I invited a few folks over to Old Ranch for a drink and perhaps something to eat.  We had Marianne & Craig, Donna & Bob, Marsha & Leon, Iris & Will, Mary & I, plus several others.  We sat around and talked for an hour or so, loads of fun reconnecting.

Odd, I didn’t take any pictures.  I guess I was still emotionally high form the parade and left the camera in the car.

We headed to Mary’s about 6:30 PM, and we watched one episode of The Amazing Miss Maisel.  We walked Scout, and he was happy to get outside and sniff the air.  I could tell Mary was tired, and she has work tomorrow, so I departed around 8:30 PM, after a glass of vino, and headed home.  I think she was going to crash.

All the way home, I thought about the party last night at Zack’s and how nice it was to have Miss Mary on my arm.  She is getting to know the family, and that makes it easier, well, except for Connor!

A quick note: Connor called me yesterday before the party and said he would keep a place for me right in front of the house.  I was to call him when we were close by so he could be ready.  What a thoughtful and considerate young man!  I was happy to repeat this story to all our friends! 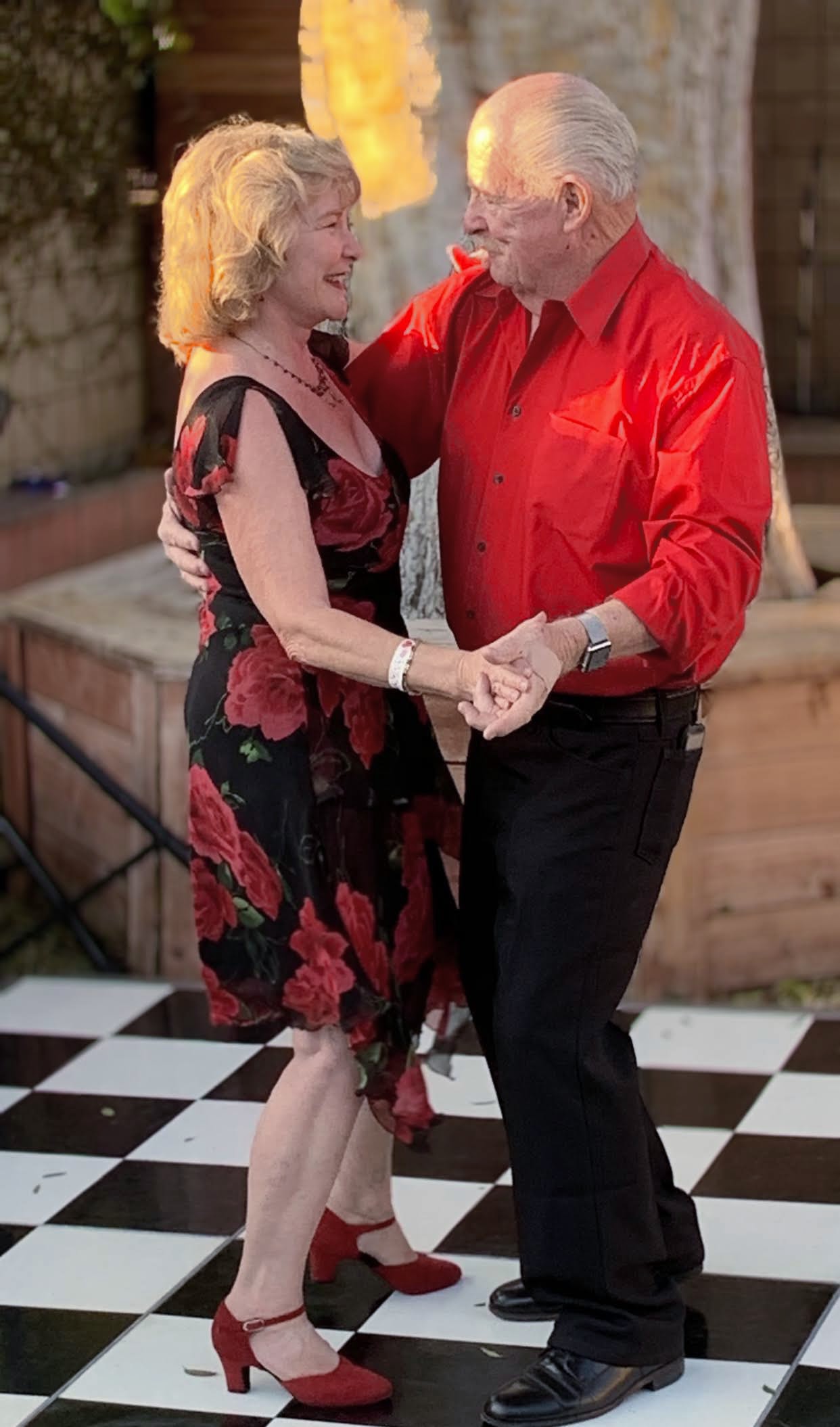 I was still thinking of last night!

I turned on the TV, but frankly, I have no idea what I watched. It was a wonderful weekend.

Just an old retired guy trying to finish out my last years on this planet. I lost my best friend and wife in early 2020. I was blessed again by reconnecting with Dr. Mary Côté, a long-time friend. Mary and I got married July 28th, 2021, and are enjoying life together and plan to spend the rest of our lives being a blessing to our friends and family.
View all posts by Paul →
This entry was posted in Family, Friends, Working Around House. Bookmark the permalink.