The Wind Is Blowing Today!

Fact:  Depending on their strength, winds can be known as a breeze, gale, storm, or hurricane.

The wind was howling so bad that Scout, The Wonder Dog, thought his fan club was outside waiting for his arrival.   Our brand-new American Flag was getting a real workout this morning. 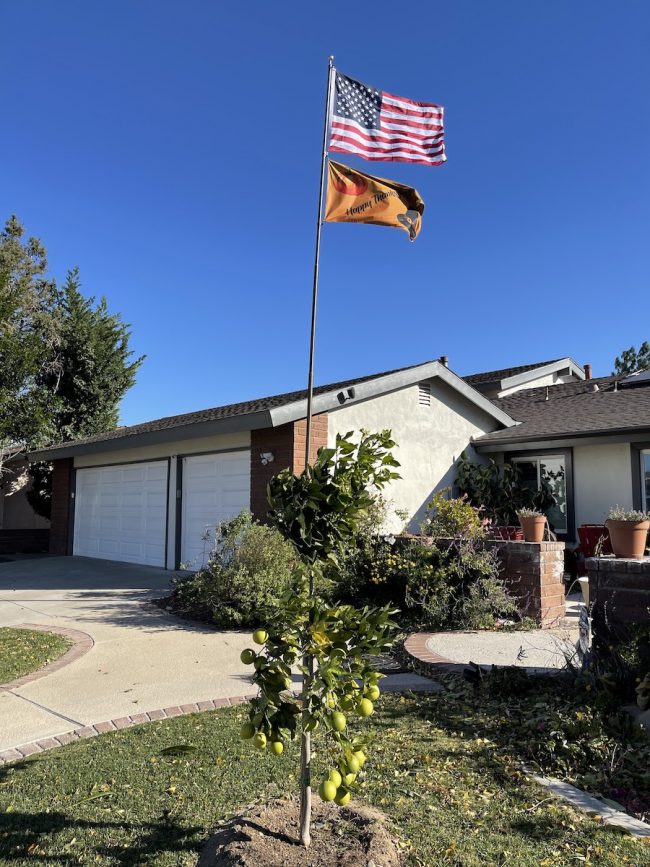 We assessed the damage, which was minor, but our gazebo furniture cover was in the pool, two of the hibiscus plants were blown over, and we lost one of our whirligigs as it spun so hard, some of the pieces came off and were propelled into the sky landing in places unknown. 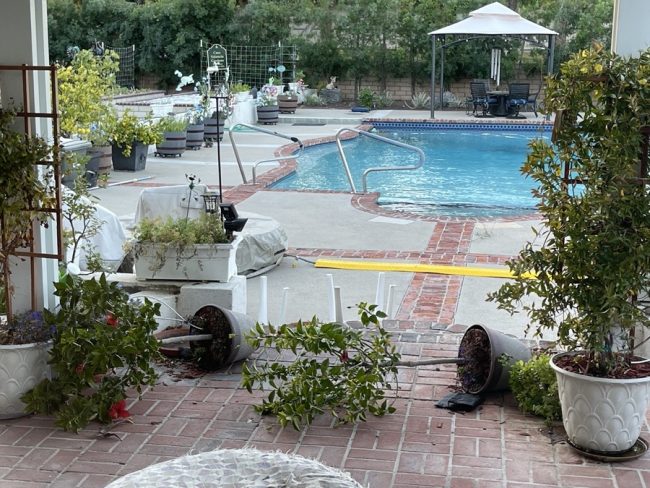 We made our morning coffee and strolled the backyard, ensuring the little plants were all doing OK.  The stroll was quick because the temperature was cool!  The wind blew right up my bathrobe and got my attention quickly.  I made a bee-line for the back door and stood next to the fire for a few minutes. 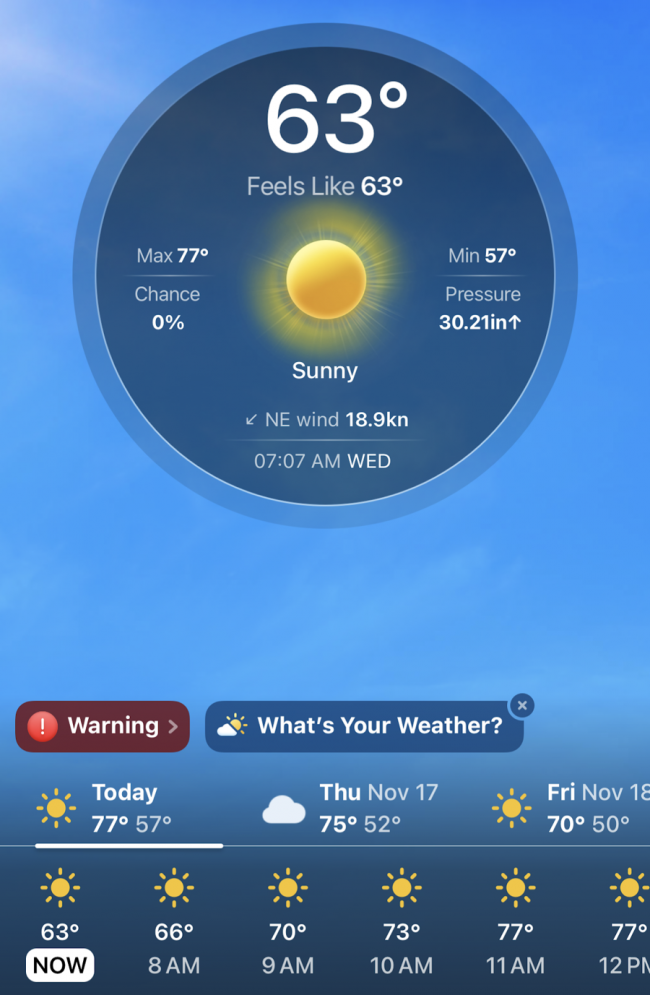 Our trusty cleaning folks were right on time this morning, and while they dusted/cleaned, we got ready to go; yes, more doctors, only this time, it was a little different.

I had a dentist’s appointment to get my teeth cleaned.  Next time I plan to mail them in; it is much easier.

Mary had to go to the doctor with Scout, who needed his shots.

Both doctors’ offices were shocked by seeing us separated.  Mary took the Silver Fox, so Scout had a place to ride, and I took Precious, meaning I was scared the entire time. 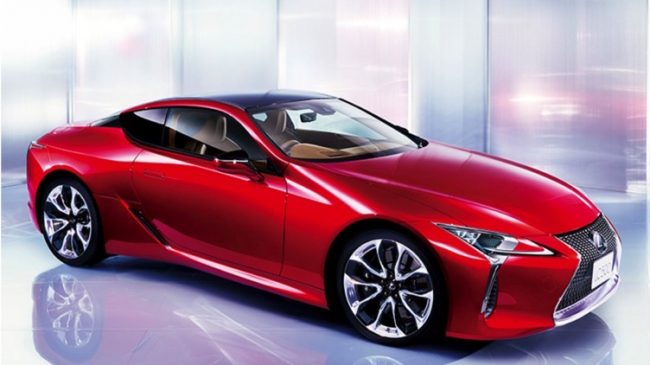 She keeps saying, “Paul, step on my gas, big boy, and watch what I do!”

We arrived back home just before noon and met with Tom, our handyman.   It feels odd to have to use a handyman around my house, but at seventy-eight, there are things I can’t do easily anymore.  If I get on a ladder, Mary knows it and finds me with catastrophic results to my behind.   OUCH!! I am now trained; no more ladders.

Tom moved Thanksgiving from the garage attic to the kitchen, put up the Stained Glass Rainbow Window Privacy Film on the kitchen window facing the neighbors, installed the outdoor sink faucets, gathered the empty propane tanks for refilling, and several other things I decided to have done. 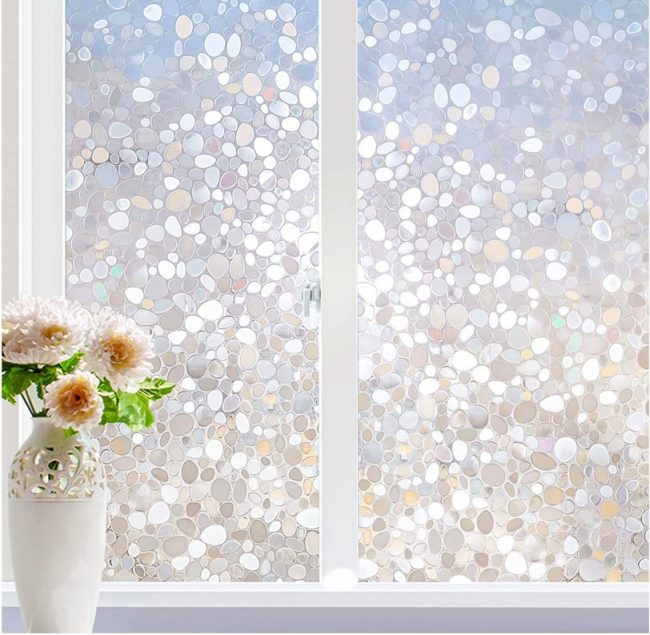 The UV protection alone was worth the investment.  The rainbows are pretty lovely, also!

Here it is installed in our home. 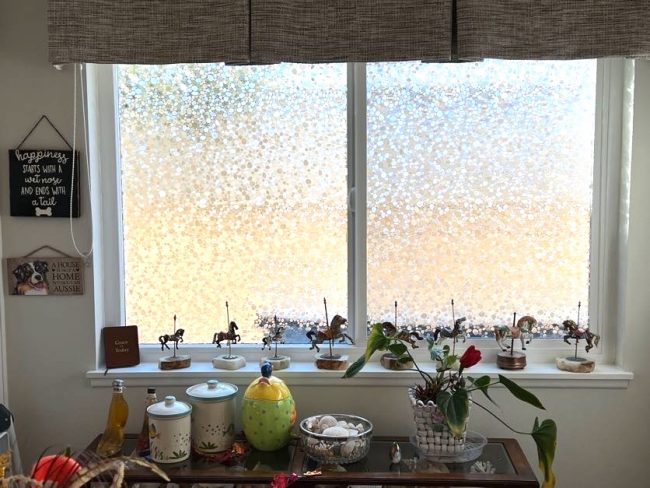 The Casa Valencia Gardens outside sink now has faucets; we need the connecting pieces to the awaiting water lines. 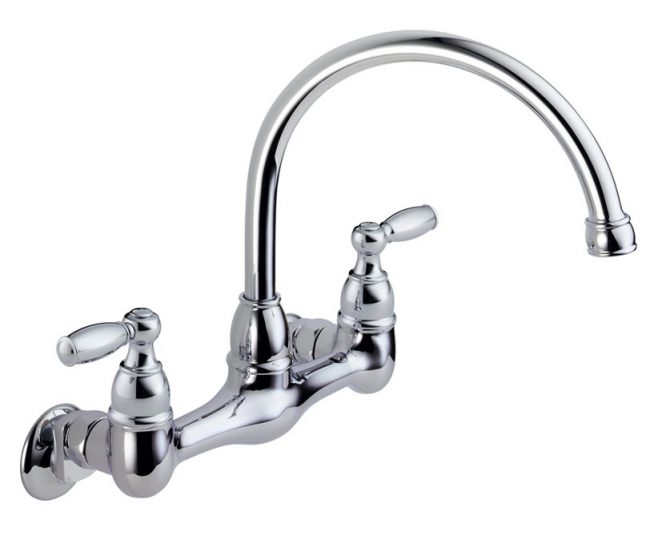 It’s almost too pretty to have outside!!

On Tom’s way out, he brought in several Amazon packages!  We opened then, and I got a new T-Shirt to add to my collection. 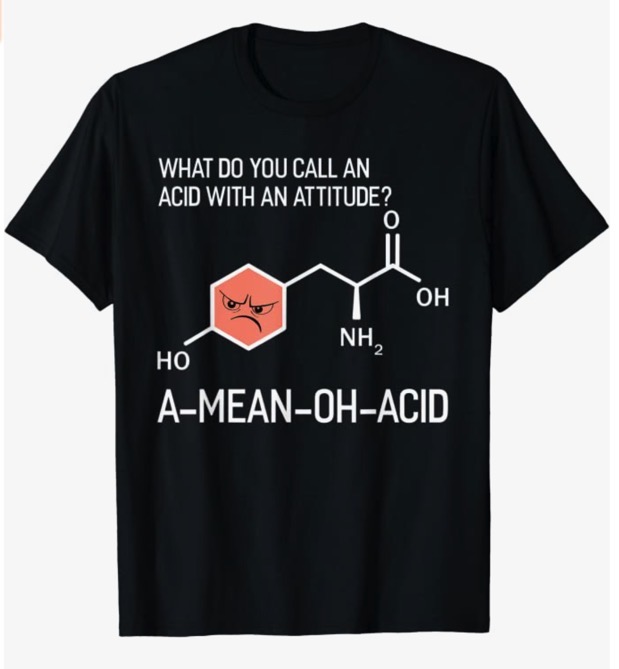 Most people will get it!

Finally, we got worms!  One thousand red wigglers were delivered, and Mary and I immediately went to the backyard, watered them, and gave them a new home.  Tomorrow we shall see how they did digging into the new soil! 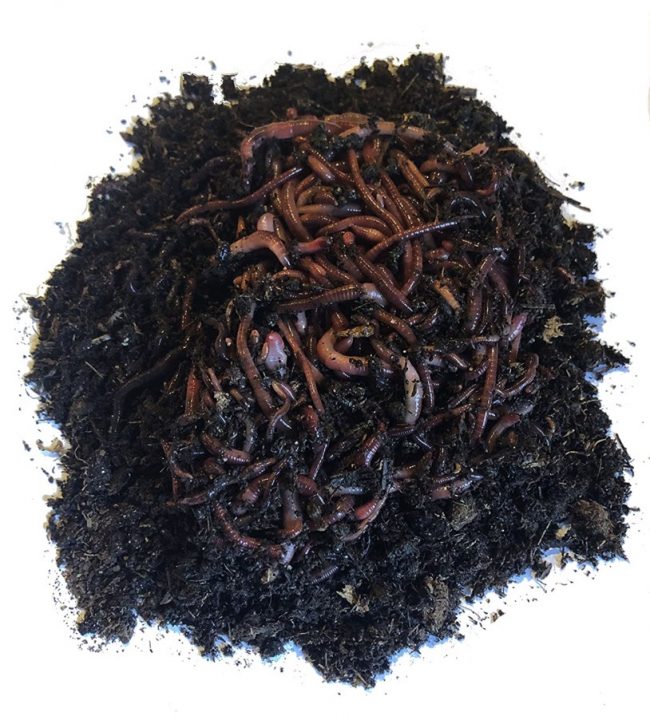 They were all alive and well after their 3,000 mile plane ride from home in North Carolina!

We started a glass of wine, and then Mary decided to make bread (or a hockey puck, we shall see)! 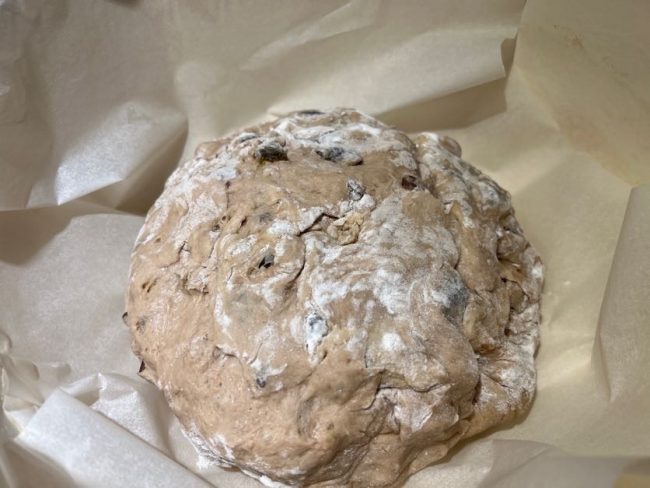 Raisins are embedded and not chopped up!

The Dutch oven was ready to make bread.  I asked Mary, “Why did the loaf of bread break up with his girlfriend?”  I told her, ” The relationship was crumbling.”

Did You Know?  A Dutch oven (not to be confused with a masonry oven) is a thick-walled cooking pot with a tight-fitting lid.  Dutch ovens are usually made of seasoned cast iron; however, some Dutch ovens are instead made of cast aluminum or ceramic.  Some metal varieties are enameled rather than being seasoned, and these are sometimes called French ovens.  Dutch ovens have been used as cooking vessels for hundreds of years.  They are often called casserole dishes in some English-speaking countries other than the United States (casserole means “cooking pot” in French) and cocottes in French.  They are similar to the Japanese tetsunabe and the sa? a traditional Balkan cast-iron oven. They are related to the South African potjie, the Australian Bedourie oven, and Spanish cazuela. 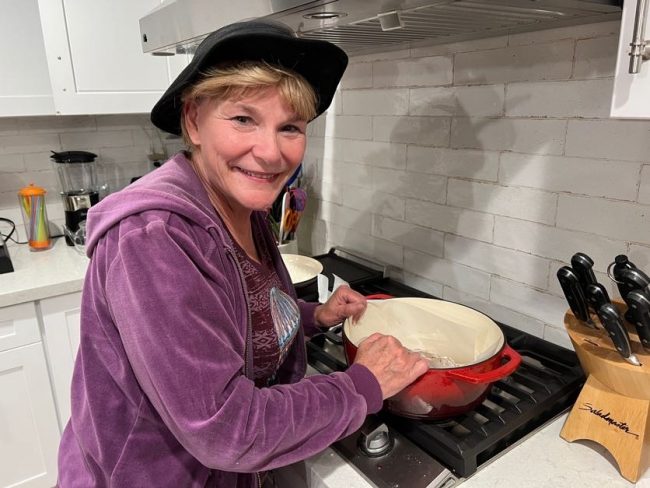 Tucked away in parchment paper, it was oven-ready! 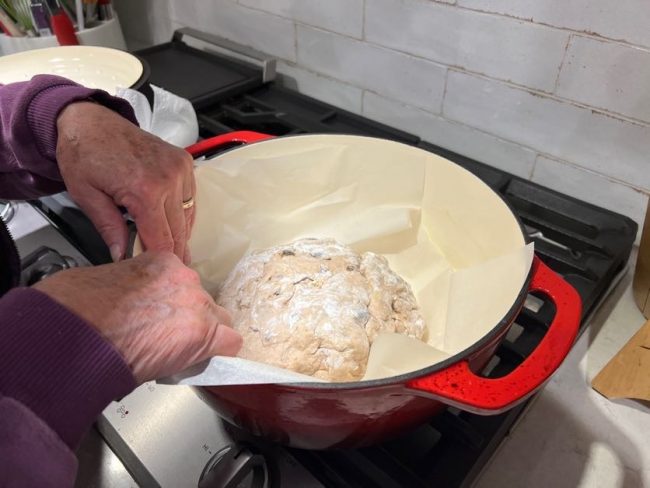 Ready for the oven!

Did You know?  The most common yeast, S. cerevisiae, is used in baking as a leavening agent. It converts dough’s food/fermentable sugars into the gas carbon dioxide.  This causes the dough to expand or rise as gas forms pockets or bubbles.  When the dough is baked, the yeast dies and the air pockets “set,” giving the baked product a soft and spongy texture.  Using potatoes, water from potato boiling, eggs, or sugar in a bread dough accelerates the growth of yeasts.  Most yeasts used in baking are of the same species common in alcoholic fermentation.

The bread did come out, and 1) we overcooked it, and 2) we used water that was too hot, so the yeast croaked!  We had a hockey puck, but on the bright side, if you dig inside the hard shell, it was good.  We had several pieces slathered with butter!

We called Dianne and David and slathered with them for a while.  David is in good spirits, even facing a round of chemo beginning tomorrow.  His worst news was “no more rare meat.”  Only well done, says the doctor. 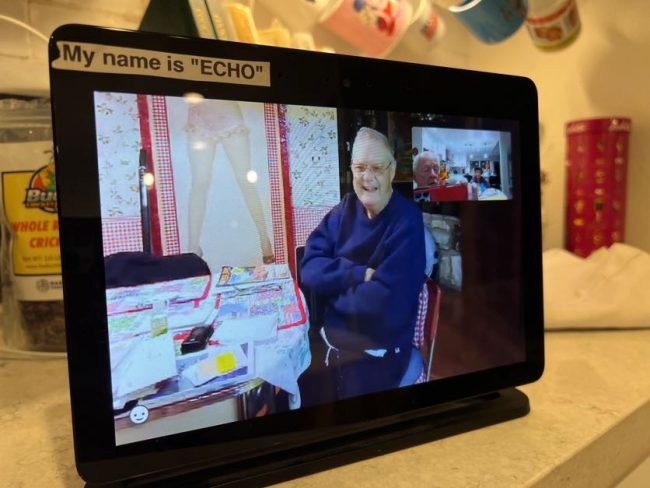 We did the sack at about 8:00 PM. Here is something to think about! 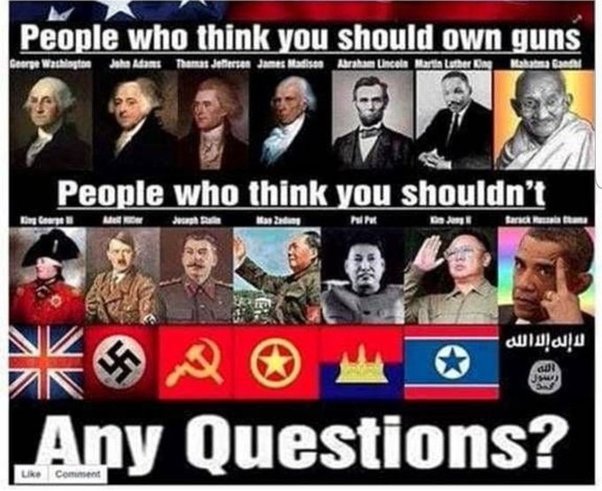 Just an old retired guy trying to finish out my last years on this planet. I lost my best friend and wife in early 2020. I was blessed again by reconnecting with Dr. Mary Côté, a long-time friend. Mary and I got married July 28th, 2021, and are enjoying life together and plan to spend the rest of our lives being a blessing to our friends and family.
View all posts by Paul →
This entry was posted in Cooking, Doctor, Just Us, Working Around House. Bookmark the permalink.