Saturday Has Arrived; We Made It in One Piece!

Fact: The original name for the search engine Google was Backrub. It was renamed Google after the googol, which is the number one,  followed by 100 zeros.

Did You Know? In 1920, Edward Kasner’s nine-year-old nephew, Milton Sirotta, coined the term googol, which is 10100, and then proposed the further term googolplex to be “one, followed by writing zeroes until you get tired.” Kasner decided to adopt a more formal definition because “different people get tired at different times, and it would never do to have Carnera a better mathematician than Dr. Einstein, simply because he had more endurance and could write for longer.” It thus became standardized to 10 to the 10th to the 100th power, due to the right-associativity of exponentiation.

At 5:30 AM, I heard the crowing of an obviously deranged chicken, so I got up and went to the office.  Scout, The Wonder Dog,  got up with me and herded me toward the backyard instead; it was potty time for the big guy! He told me it was Saturday and time for his bath! 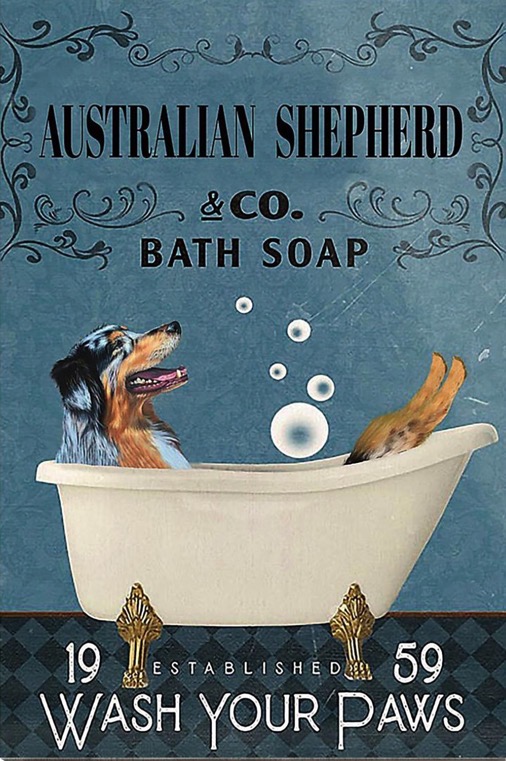 He was giving me a hint; he wants his bath but ONLY if it uses a special soap!

It was 48 degrees when we woke up, so we stayed inside and worked in the office until about 10:00 AM.  Mary continued making reservations and arrangements for our road trip!

I paid bills and straightened out the wireless wire nest!  It’s kind of like the liberals who believe in electric cars; they think that means no oil!  Oil is used to generate the power to recharge their silly vehicles.  NOTE: Do not get me wrong, we will have electric cars eventually but only after we get serious about other power sources than windmills!

It is like the ‘wireless electronics”; we must have a charger cable to keep them working.  I have six charger cables right by my computer to keep my “wireless” items going!

Russian scientists dug 1000 meters deep and found a copper wire.  They concluded that 1000 yrs back, our ancestors were using copper cable technology.

Indian scientists dug and found nothing. They concluded our ancestors were using Wireless Technology! 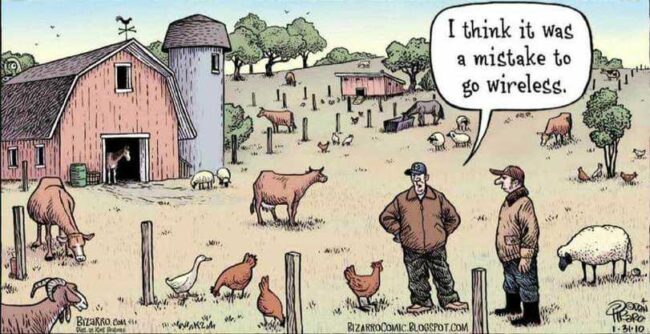 We had some extra space for veggies out along the south forty fence line.  We surveyed the area before heading to Home Depot for a veggie run! 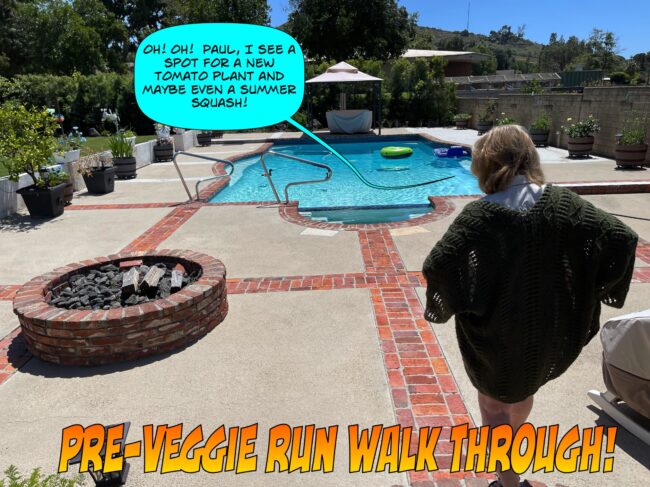 Plus, it is good exercise!

I completed getting ready to go shopping and had a dilemma. 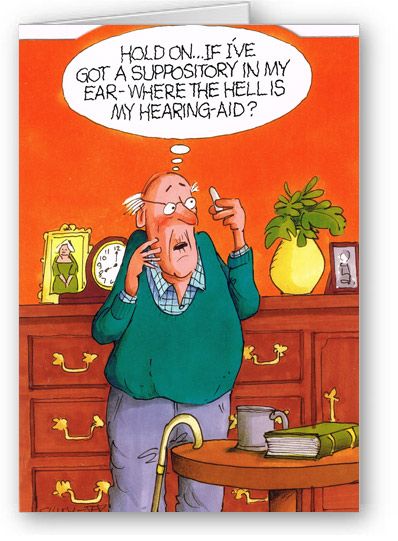 While at HD, we picked up two hibiscus plants to put on our patio, and they will add color and symmetry to the patio decor.

Hibiscus develops large, trumpet-shaped flowers without scent. The flower consists of five or more petals that can be white, yellow, orange, purple, pink, red, or blue. It contains both male (stamen) and female (pistil) reproductive organs. Bees, butterflies, and hummingbirds are the primary pollinators of hibiscus flowers. 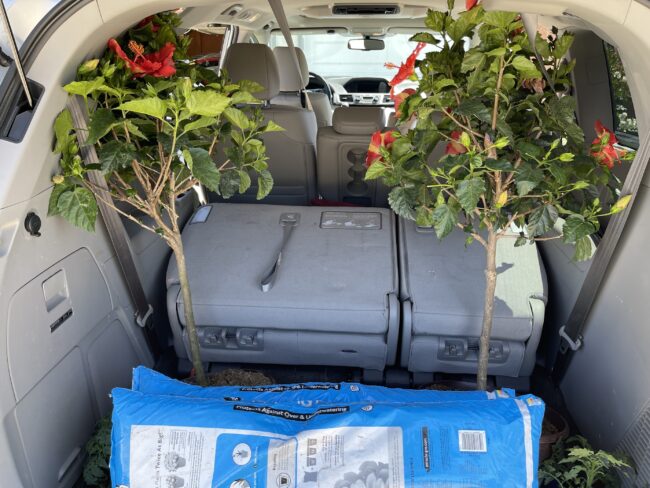 We now have two hibiscus trees; we love having the van!

We hauled all but one plant to the backyard and began the process of planting the little guys.  We had our electric auger making the planting go fast!  MAry located, I drilled, Mary planted, I got the cages, and MAry watered; we are indeed a team!

Did You Know? According to the Guinness Book of World Records, the largest tomato tree grows at Walt Disney World Resort’s experimental greenhouse, yields more than 32,000 tomatoes, and weighs 1,151.84 pounds (522 kg). The plant was discovered in Beijing, China, by Yong Huang, Epcot’s manager of agricultural science, who took its seeds and grew them in the experimental greenhouse.

Gardening adds years to your life and life to your years. 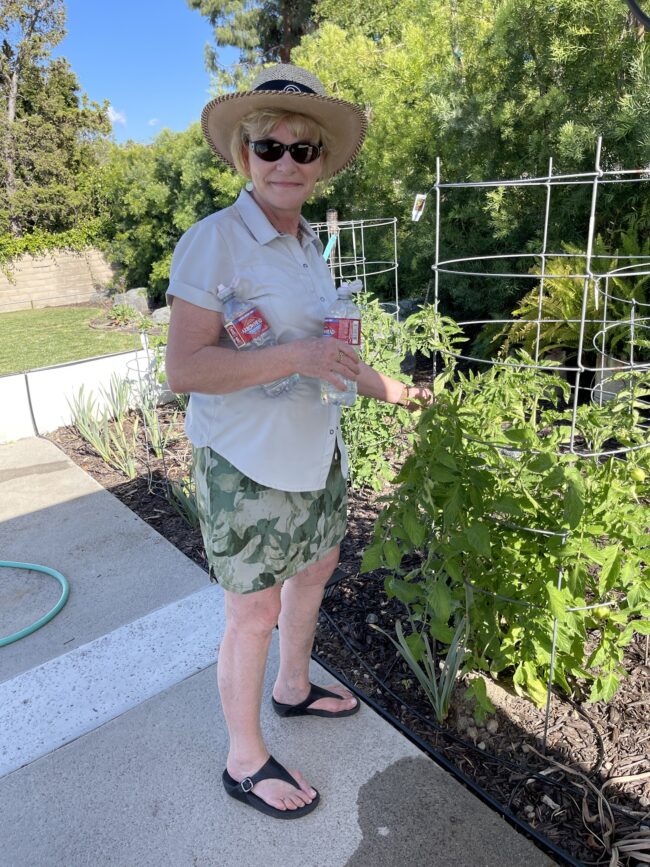 Two hours later, they are planted, watered, and drip-lined!

In 50 days, we will be loaded with tomatoes. I told Mary, “I like to put coriander on my blended tomatoes. It’s soup herb.”  I present you a ponderism: If a tomato is a fruit, is ketchup a jam?

The plants got their little drip lines, so we do not need to worry about them if we are gone.  If we get a hot spell, I can turn the watering system on/off via my phone!   You may notice a tag wired to the top of every stand.  Those tags came with the plant, so we will remember what they are. 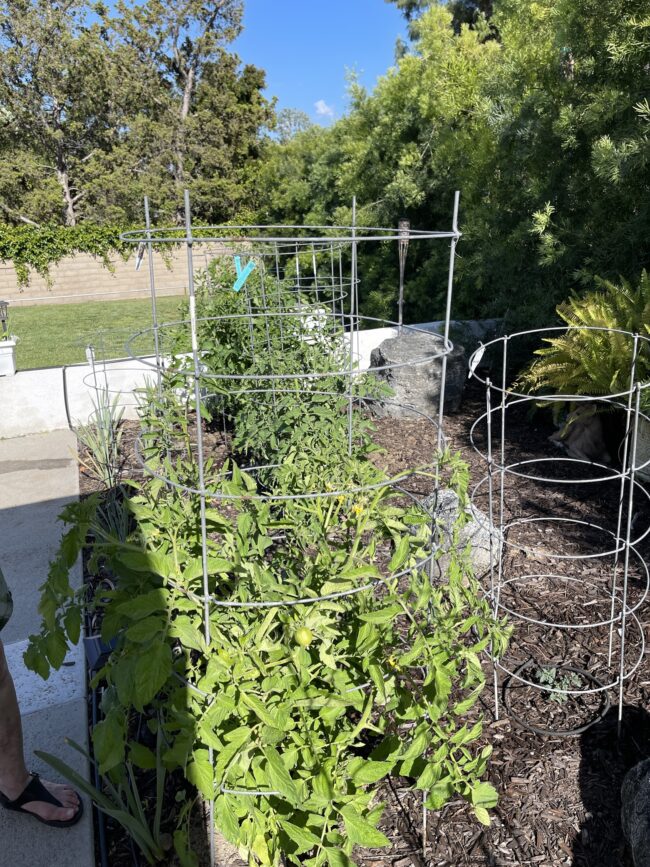 We had one remaining tomato plant and no place to put it in the back yard, so it landed on the left side of our front yard garden!  Why not?  It was a Roma tomato which is a paste tomato and delicious. 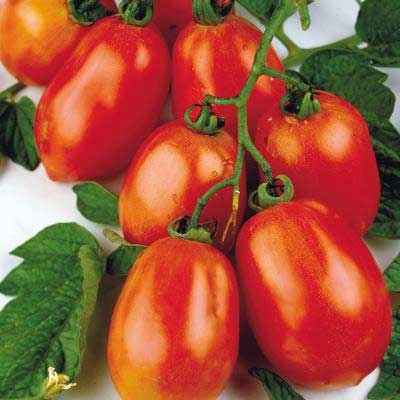 I cut them in half, place them on a baking sheet face up, and broil them to make amazing snacks!

When I see our garden and remember the work we did together, I always think there are always flowers for those who want to see them.  I am blessed to have Dr. Mary by my side, and she sees the world in the same way!

The kids next door challenged me to water fight in the front yard.  I said, “Sure!” I’m just waiting for it to boil.

I hate when political candidates put their signs up in my front yard. I am going to call City Hall and find out who the hell is Foreclosure? 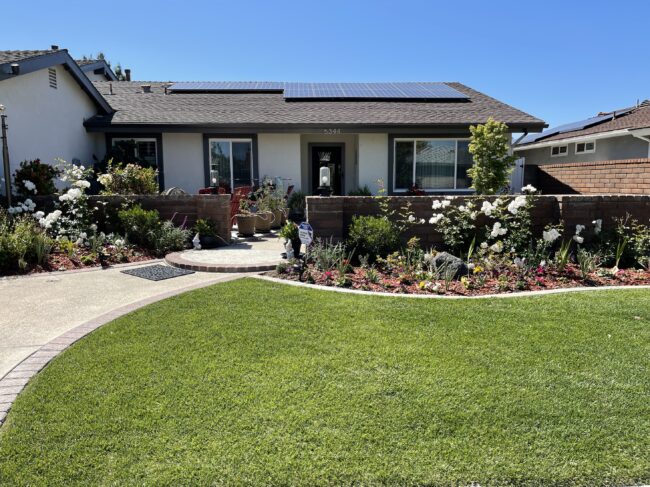 The last tomato ended up in the front yard!

We were tired, so we had some leftovers for dinner and then went to the swim spa.  After ninety minutes, we barely crawled out and headed for bed.  We attempted to watch TV, but we were both out like a light in minutes. At 11:00 PM, I woke up, took off Mary’s glasses, turned off the TV, took Scout out, and completed the daily diary for today!

Just an old retired guy trying to finish out my last years on this planet. I lost my best friend and wife in early 2020. I was blessed again by reconnecting with Dr. Mary Côté, a long-time friend. Mary and I got married July 28th, 2021, and are enjoying life together and plan to spend the rest of our lives being a blessing to our friends and family.
View all posts by Paul →
This entry was posted in Gardening, Just Us, Working Around House. Bookmark the permalink.