Recovery Day #4: No Crutches But I Still Have The Panty Hose!

“I tried to look up impotence on the Internet, but nothing came up.”

I was up early as Scout wanted to go outside and play.  Mary was asleep in the guest bedroom, so I got into the shower carefully so as not to wake her up. There was a small yelp when I saw a spider in the shower! It was terrifying. Oh, the yelp was from the spider, not me!

After mary got up, I told her, “I once had a spider on my computer keyboard earlier, but not to worry. It’s under Ctrl.”  Great, then I got a Maryism as she replied, “I asked a friend what spiders eat. She didn’t know, and then told me to go and check on the web.” 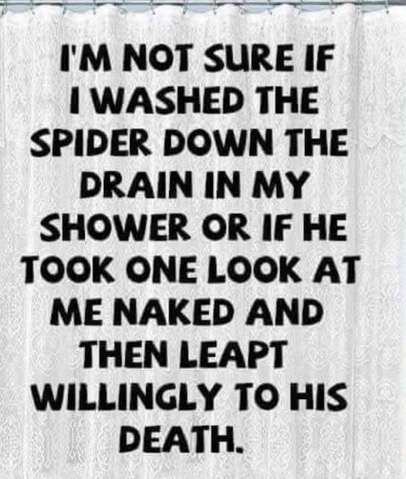 We did zip today; we didn’t leave the house except for walk Scout in the later afternoon. We enjoy just being together, so time goes by quickly.

We made baked apples, and Mary made “Mommy Breakfast Sandwiches,” which filled us up for the rest of the day.

We finished off the puzzle, but one piece is still missing, and we do not know where it goes!  We asked Scout but he denied all knowledge of the situation.

We were delighted to finish the jigsaw in only three weeks when the label on it says 12-24 months. 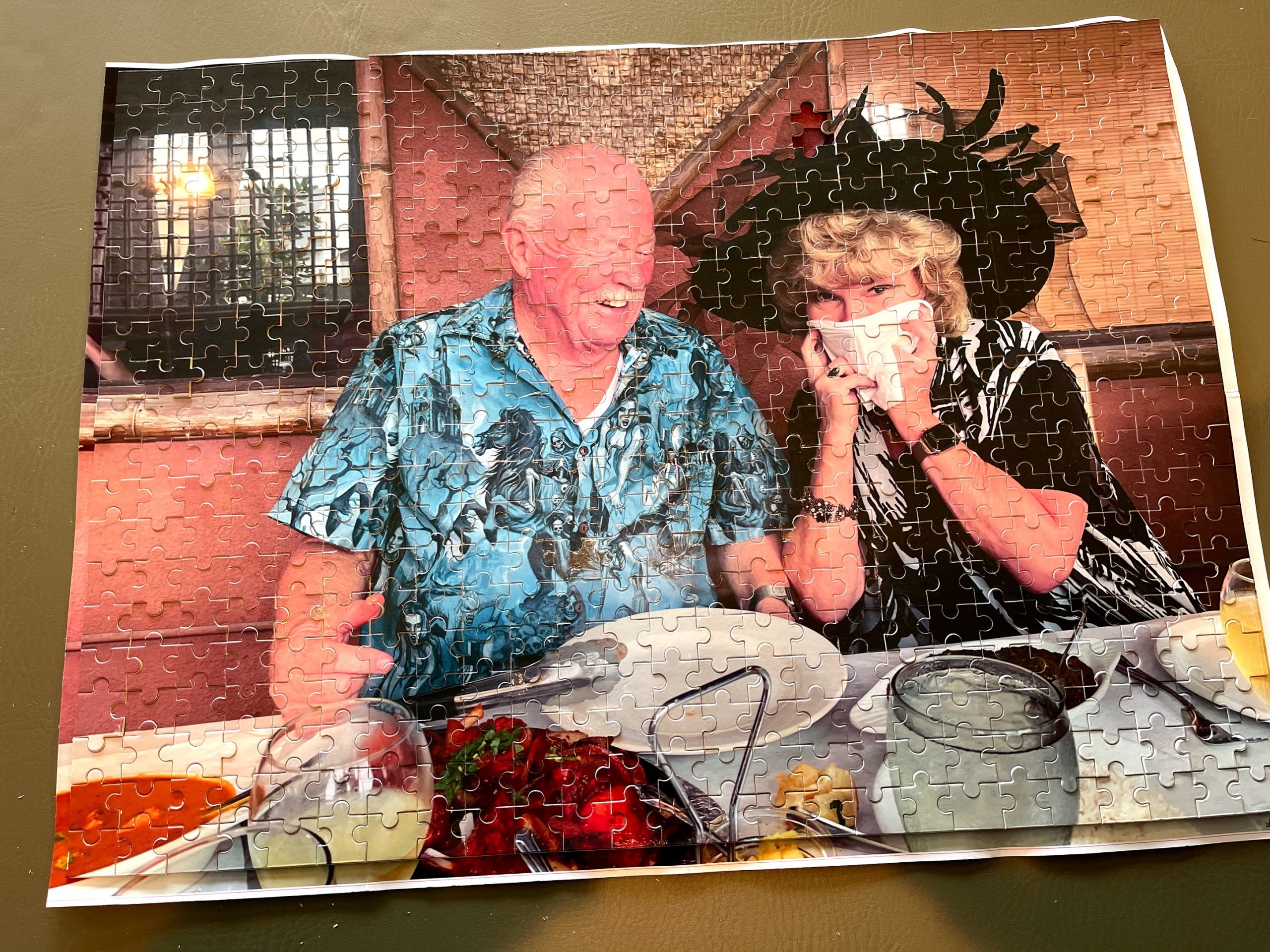 We searched all over but to no avail. Maybe Scout, The Wonder Dog, ate it by mistake?

We took a walk, and Scout pulled us around the block.  It is time for a trip to the trainer.  He saw our neighbors’ full-sized poodles. I wondered if he thought poodles are members of a weird religious cult.

I put off the pantyhose (OK, they are called TED socks, Thrombo-Embolic Deterrent)  as long as I could, and then I was threatened if I did not put them back on immediately.  Mary brought in the freshly washed and shrunk compression socks and said, “Put these on, NOW!”.

OMG, they looked like size one baby socks.  I was successful in getting the first pair over my big toe, I declared victory and tried to leave the room.  I got the cold hard stare, almost “the mommy look”.

Did You Know? Compression stockings are specialized hosiery designed to help prevent the occurrence of and guard against further progression of, venous disorders such as edema, phlebitis, and thrombosis. Compression stockings are elastic compression garments worn around the leg, compressing the limb. This reduces the diameter of distended veins and increases venous blood flow velocity and valve effectiveness. Compression therapy helps decrease venous pressure, prevents venous stasis and impairments of venous walls, and relieves heavy and aching legs.

Knee-high compression stockings are used not only to help increase circulation but also to help prevent the formation of blood clots in the lower legs. They also aid in the treatment of ulcers of the lower legs.

Unlike traditional dress or athletic stockings and socks, compression stockings use stronger elastics to create significant pressure on the legs, ankles, and feet. Compression stockings are tightest at the ankles and gradually become less constrictive toward the knees and thighs. By compressing the surface veins, arteries, and muscles, they force circulating blood through narrower channels. As a result, the arterial pressure is increased, which causes more blood to return to the heart and less blood to pool in the feet.

She then said. “Lay down and  I will show you how it is done!”  I thought to myself, “This will be fun!”  It was, for me at least, Mary fought for 20 minutes on the first leg using a jar of vaseline, a small crowbar, to kitchen utensils which I was unable to identify, and a few new words not in my limited vocabulary.  Success, the left leg is done.

We waited thirty minutes before she tried the right,  Well her technique had improved learning from the first sock.

I was horizontal again and I could smell the faint smell of butter.  Oh dear, the term “butter my buns” now has a new meaning.  She planted her feet on my shoulders, got out the block-and-tackle tying the end carefully to the window sill, put on her work gloves, and began to yank on the rope.  I heard a whoosh and it was Mary spraying my leg with WD-40 and 3 In 1 Oil.  Inch by painful inch those little white devils moved up my leg.  I thought I heard them say, “I’m coming to get you my pretty!”

After a short nap, Mary was able to function again. I, on the other hand, did a quick inventory of my toes to make sure they were all still there.

Later on, we watched Avatar, and I finally made it all the way through.  Not a bad movie on my third try! We were still filled with our lunch, so we skipped dinner.

Mary works tomorrow, so she turned in early.  Scout was confused; where should he go?  We were in and out of both bedrooms all evening; we may have given him a complex. 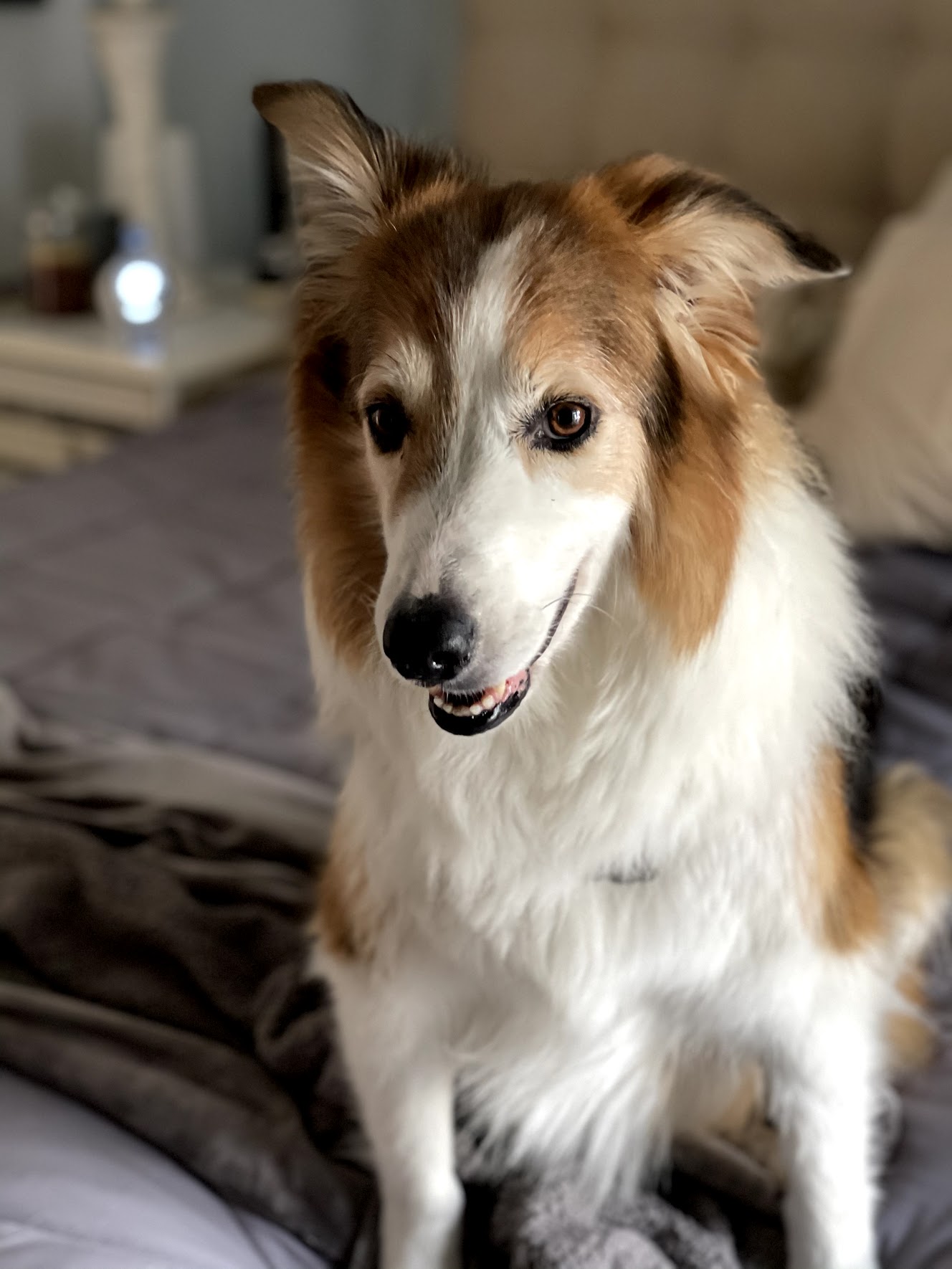 Scout did not know where to land, so he alternated all night long.

The rain was fairly heavy later in the evening, but we need all we can get!

Tomorrow when Mary goes to work, Miss Irene s coming to provide me with adult supervision (translation: attempt to keep me off my feet, do my exercises, and keep my legs high).  Irene is a dear, dear friend.

Just an old retired guy trying to finish out my last years on this planet loving my best friend and wife, having fun, learning, and passing on helpful things to others.
View all posts by Paul →
This entry was posted in Just Us, Working Around House. Bookmark the permalink.
Powered by Maribol IMDB Plugin