Recovery Day #5: Just About Done Except For The Panty Hose (TED’s)!

I always say “Morning” instead of “Good Morning.” If it were a good morning, I would still be asleep in bed instead of talking to people.

Mary was up early as I heard the shower water begin to run.  She was very quiet, and her bedroom room is right across from the guest bathroom.  When I heard the water start, I dropped the bathrobes into the dryer on high, so it will be warm for her when she got out; a little special service at Chez Liles.

We walked Scout, or rather he walked us.  At 7:45 AM, Irene came by as she has babysitting duty at 8:00 AM when Mary goes to work. Dear Irene has been a family friend (and in the family) for years and is very special.

She is using my van as her car is in the shop and I am happy the van is getting some use! 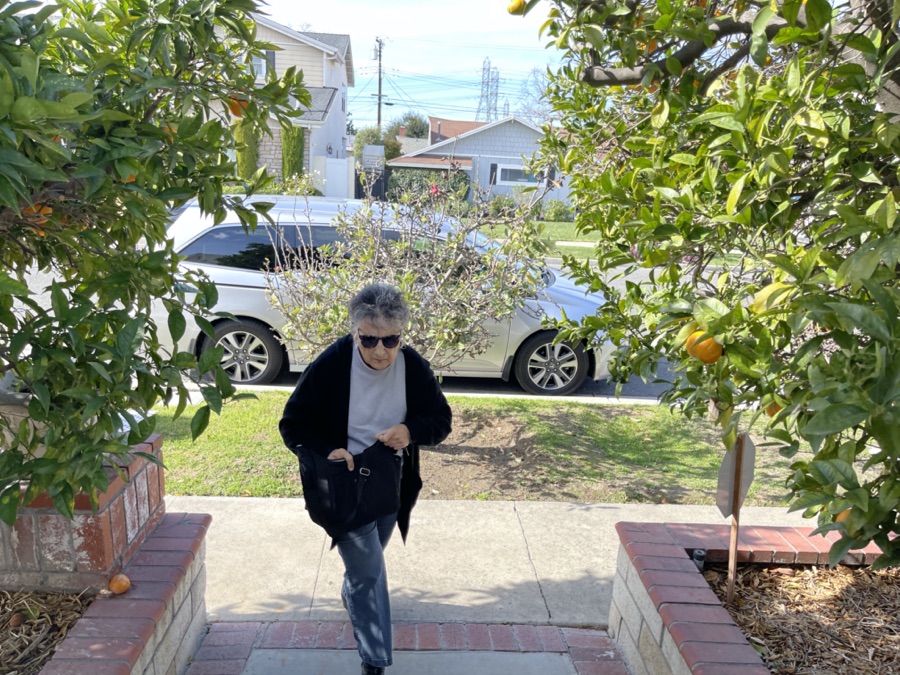 We spend two hours trying to get her scheduled for a COVID-19 shot, and late in the day, she got an appointment and is getting a shot tomorrow.  I signed up last week and have not heard anything yet? 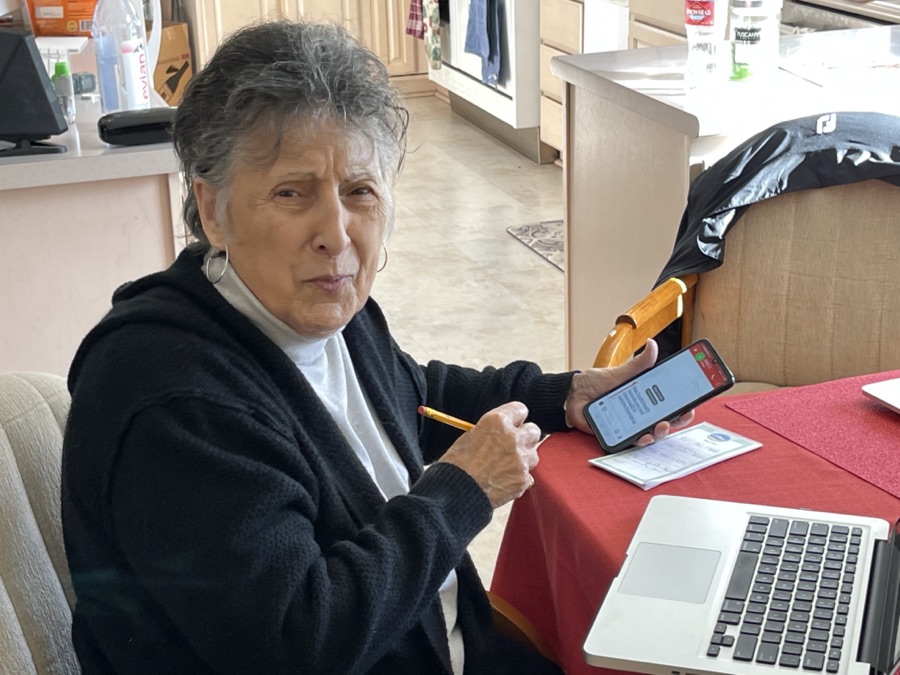 We talked to Colleen, and she is still in the hospital but feeling better.  We talked to Mark for a while.

After Irene departed, Mary and I needed to go to the market for tonight’s meal; I mentioned to Mary that, “You’ve got bad eating habits if you use a grocery cart in 7-Eleven.”

As we pulled out of the driveway, I asked her to stop as my mind caught a great photo; it was the clouds but taken through the tinted top of the thje car window.  The blues seemed to be adding a new dimension to the photo. 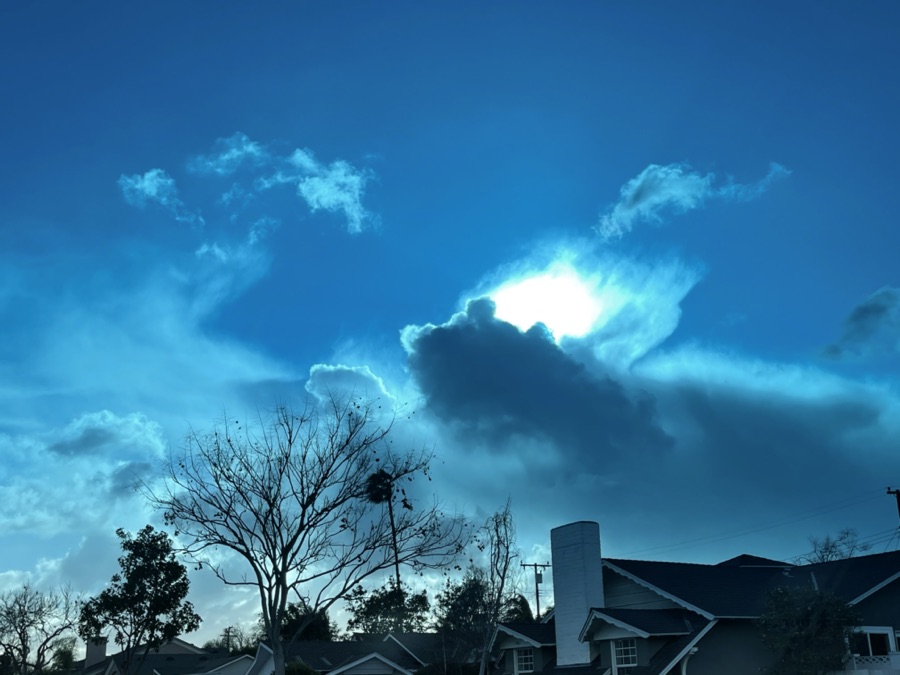 It was just a test, and it seemed to work!

We made it to the market, and off we go, Mary walking and me riding the putt-putt.  At the checkout, I called Mary “the bag lady.”  I was glad the putt-putt could go faster than Mary could run. 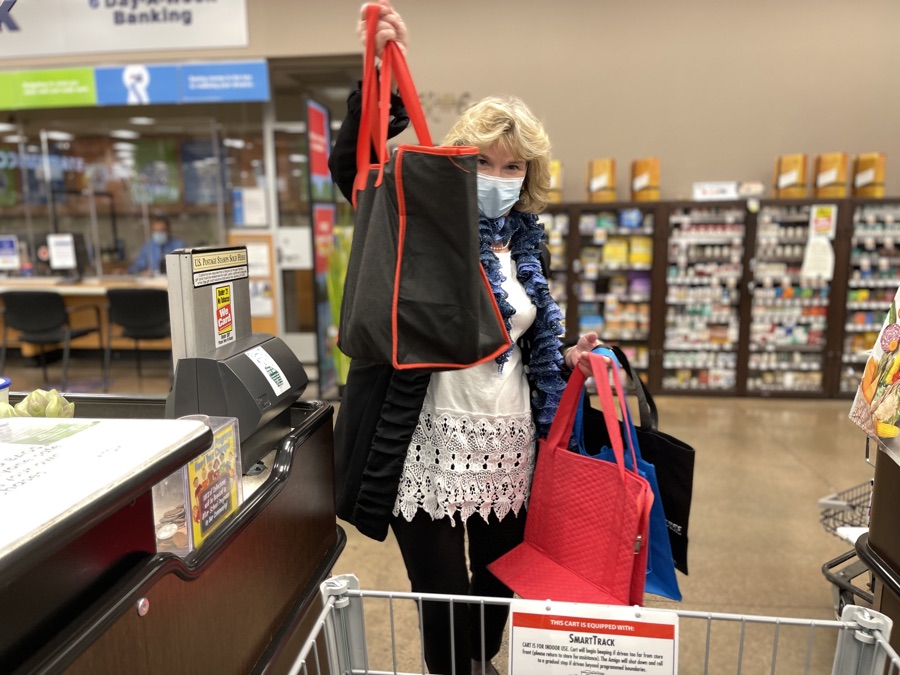 At our store, you have to pack your own bags if you bring your own bags.  She did an excellent job and was asked by the manager if she wanted a job. 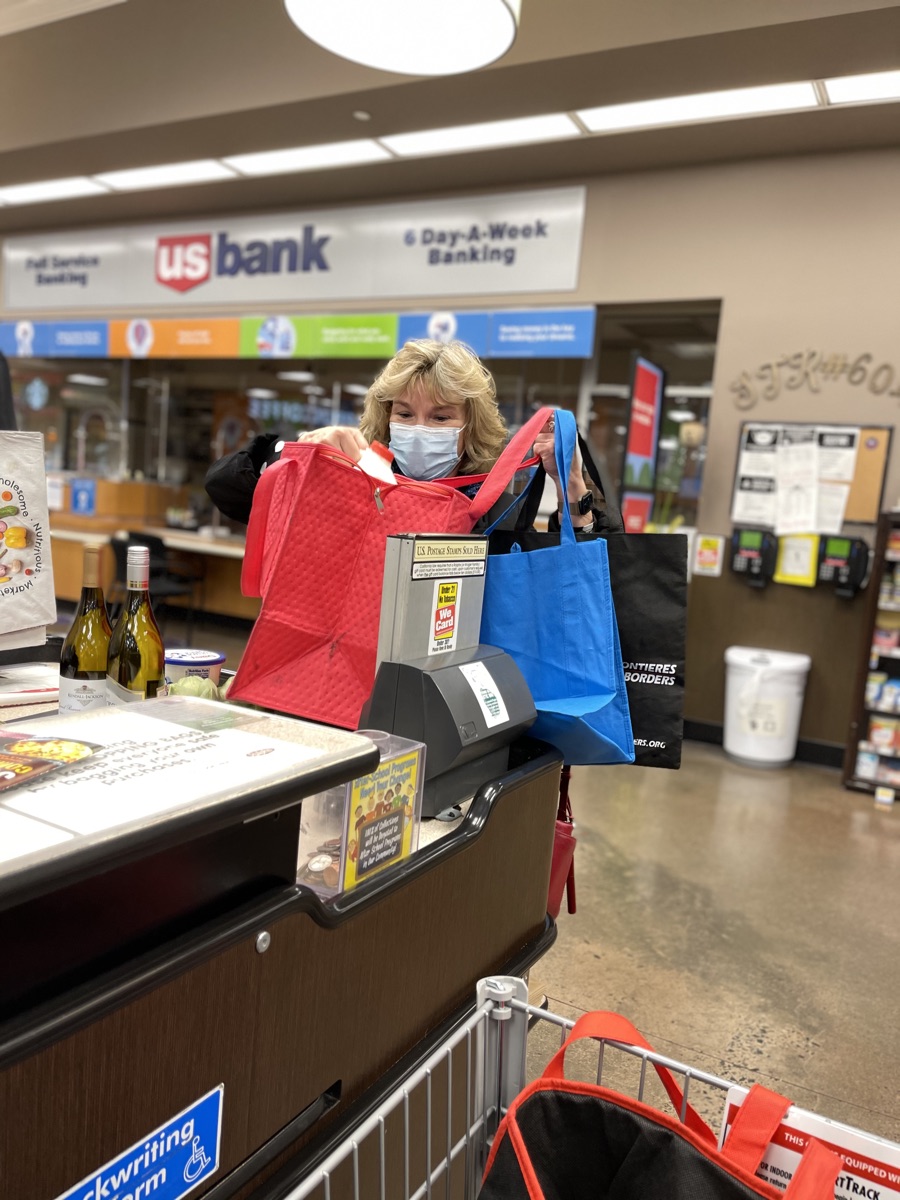 Tonight it is going to be a baked puttanesca. Spaghetti alla puttanesca (pronounced [spa??etti alla putta?neska]; in Italian) is an Italian pasta dish invented in Naples mid-20th century. Its ingredients typically include tomatoes, olive oil, olives, capers, and garlic, in addition to pasta.

Mary loves to cook, and I enjoy being in the kitchen with her, so we go through our various books and magazines and make it.  We just ordered the 50th-anniversary edition of the great french cookbook entitled “Mastering the Art of French Cooking, Volume I: 50th Anniversary” by Julia Child! 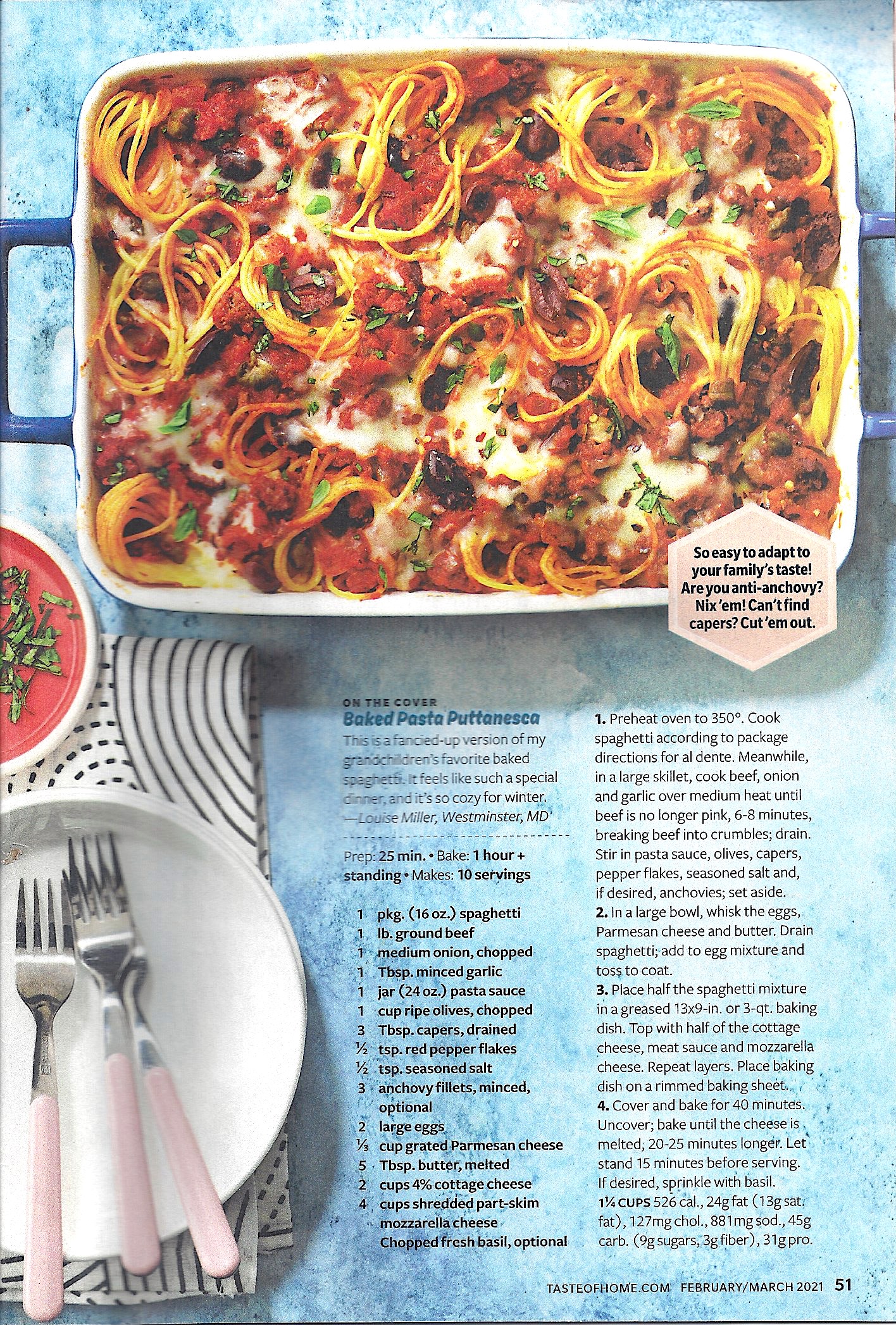 We substituted zoodles for the pasta, and it was perfect!!!

When I looked up puttanesco I was a little surprised but it was on the internet so it has got true.

Etymology: From puttanesca (“whorish”). Sometimes claimed to have been invented in a whorehouse, or that the name is from puttanata (“stupidity”), according to an account where Sandro Petti is identified as the inventor of the sauce.

First, the zoodles, my sp1ecialty!  These little guys will soon be zoodles.  Zucchini is one of the lowest-calorie vegetables when compared to the same serving size as other nutritious vegetables like broccoli or Brussels sprouts. Coming in at only 19 calories per cup, zucchini also packs a nutritious punch. 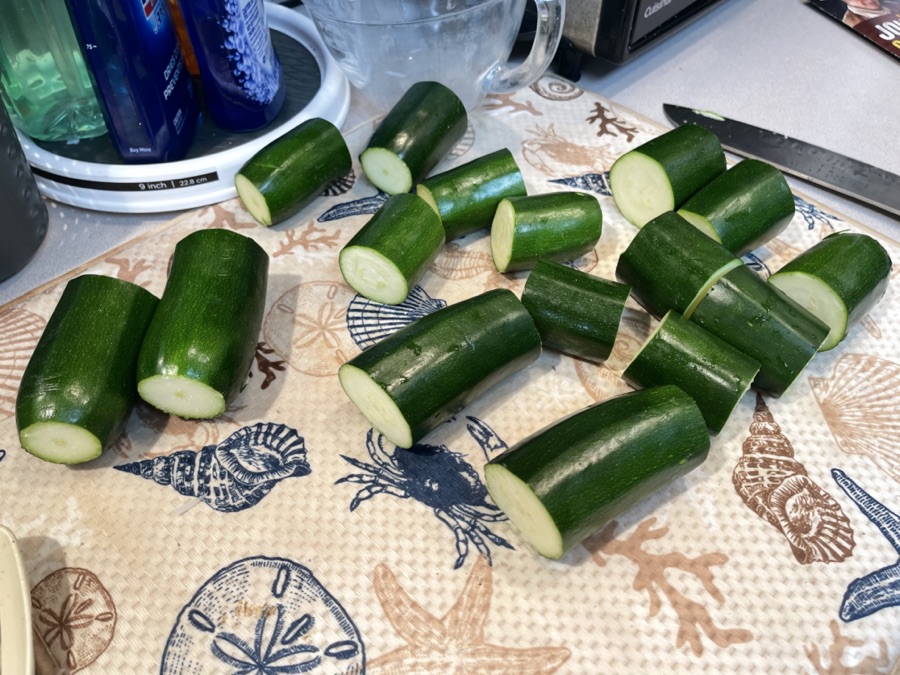 We added butter and garlic to the zoodles, but we did not cook them figuring the 350-degree oven would take care of that. 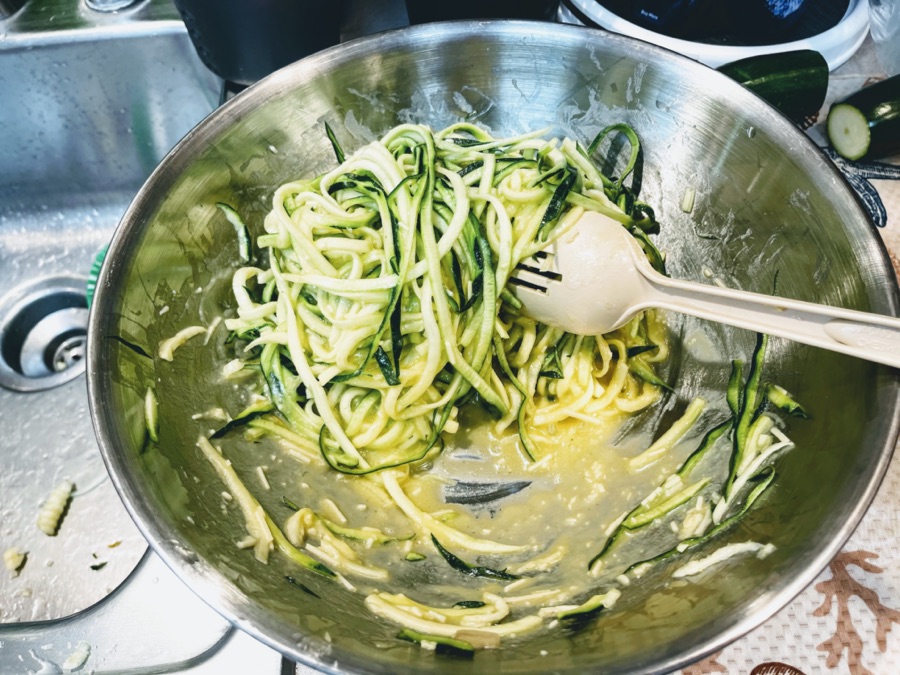 The green spaghetti is ready!

Mary worked her magic on the sauce, and we were ready to put the ingredients into a layered backing pan. 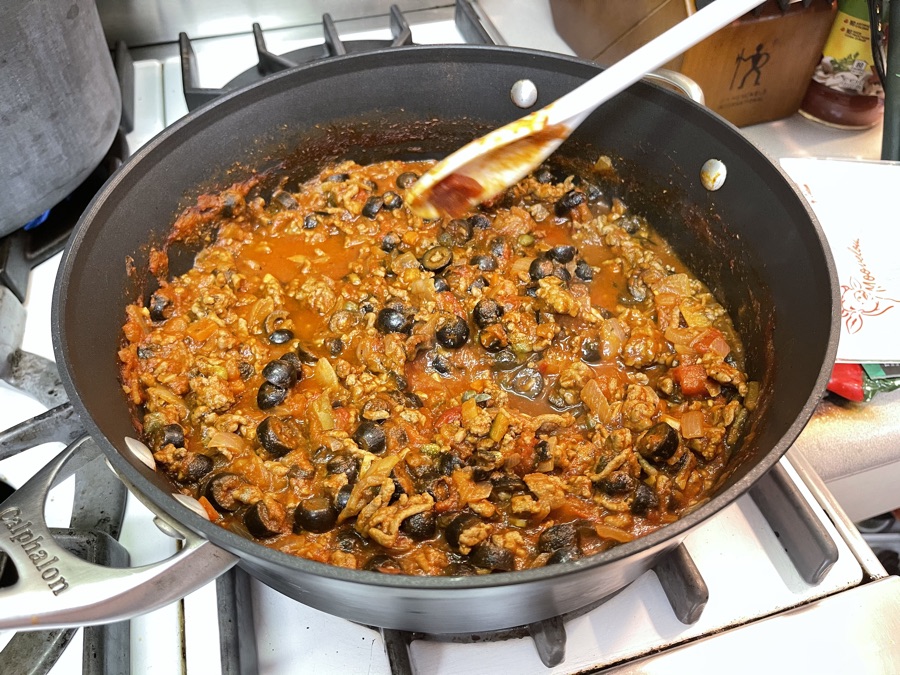 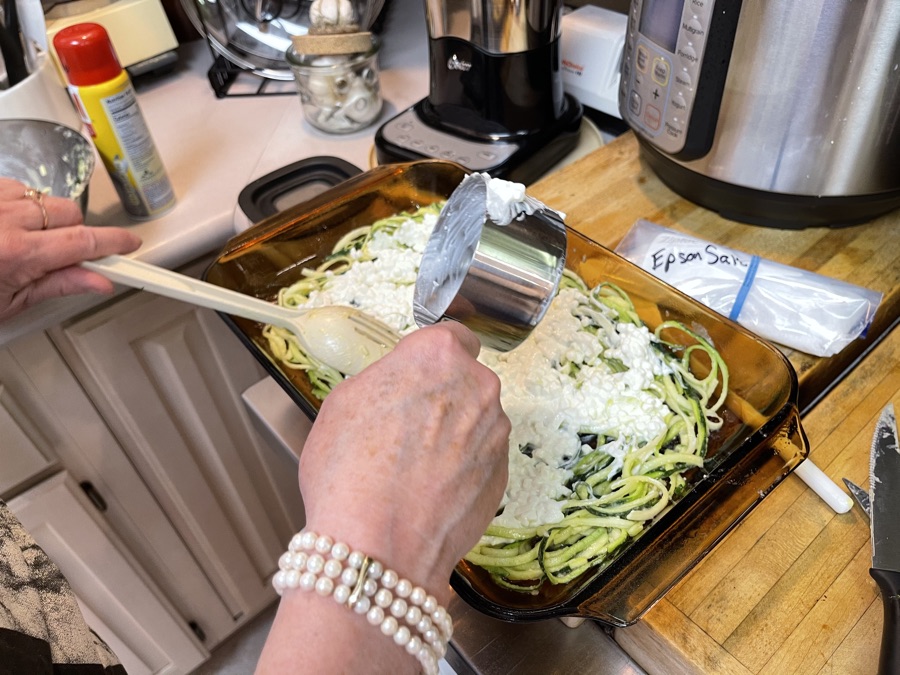 Looking good, but 30 minutes in the hot oven will make it even better. Before we put it in the oven, I set the table and got the artichokes ready.  As I left to go to the dining room, I said to Mary, “Pasta la vista, baby.” 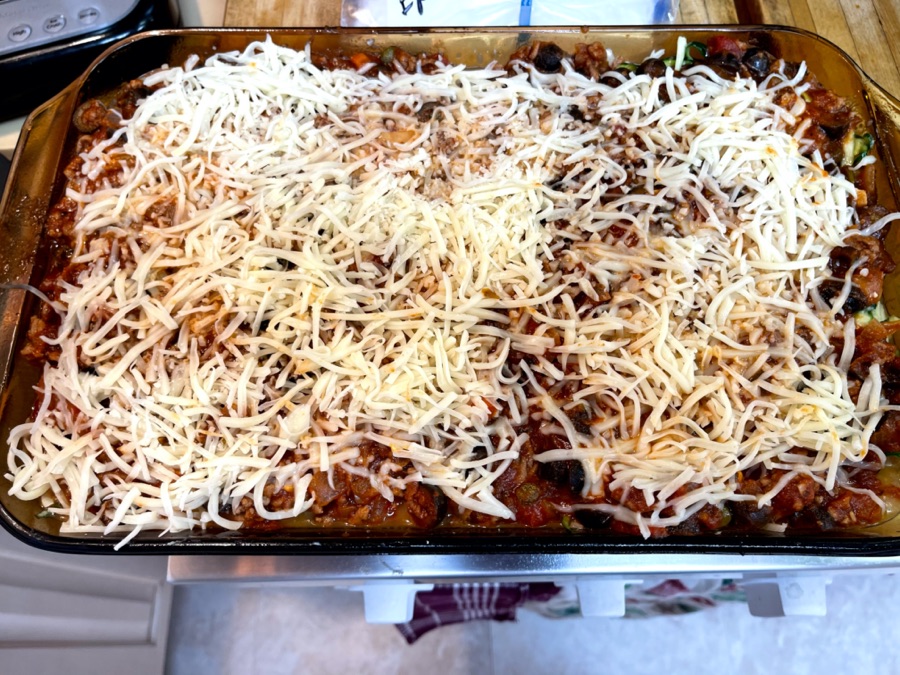 HELP!  I am going into the oven for half an hour!

When we took it out, it looked so good; it was pre-pasta-rous!  We had to remove the aluminum foil at the twenty-minute mark and give it ten more minutes.  We watched Two and a Half Men between checks on the dish, 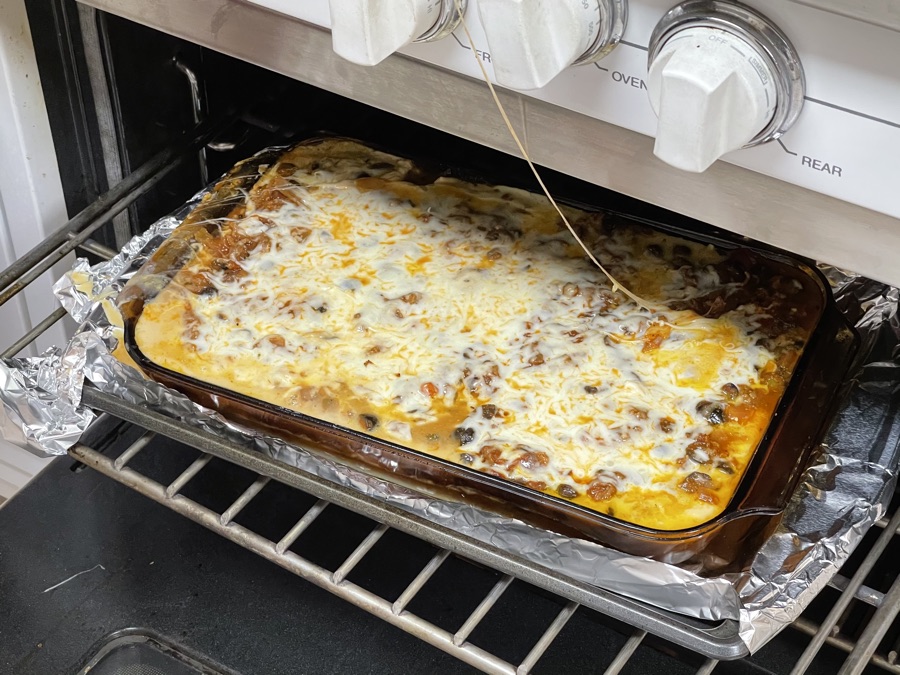 The cheese was perfect, and the dish looked good enough to eat.

Mary did one last check before we took it out for a spin. I told Mary, “You’re pasta-tively amazing.”  While we were cooking, we called Colleen and talked to her in the hospital. We also got a call from Robin and checked in with her! 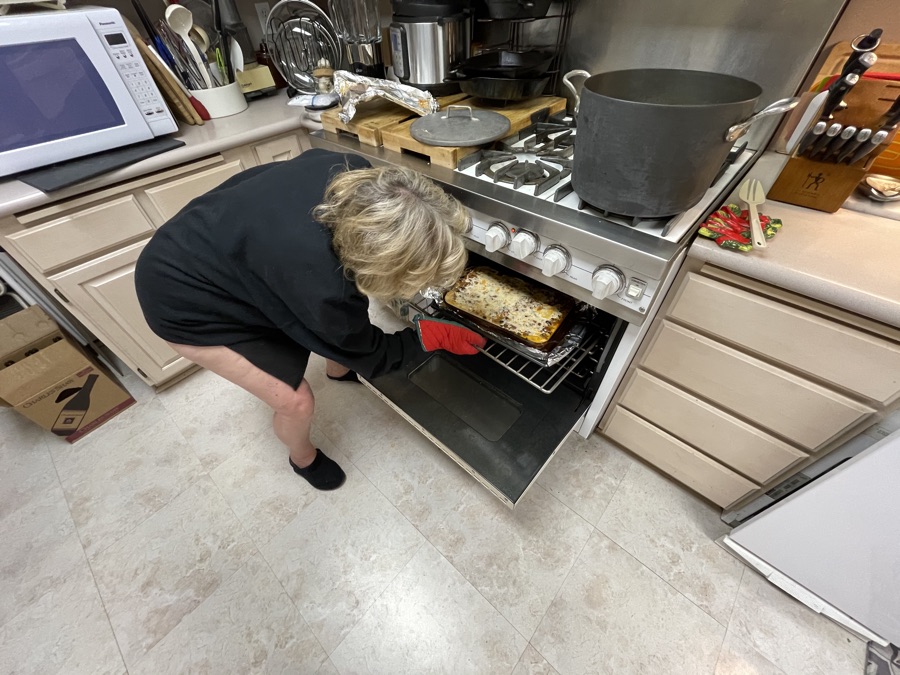 Dinner was ready, but the dish was so hot we had to wait a bit.   I was going to take a picture of our dining room table, but the food was so good we just sat and dug into the dish. 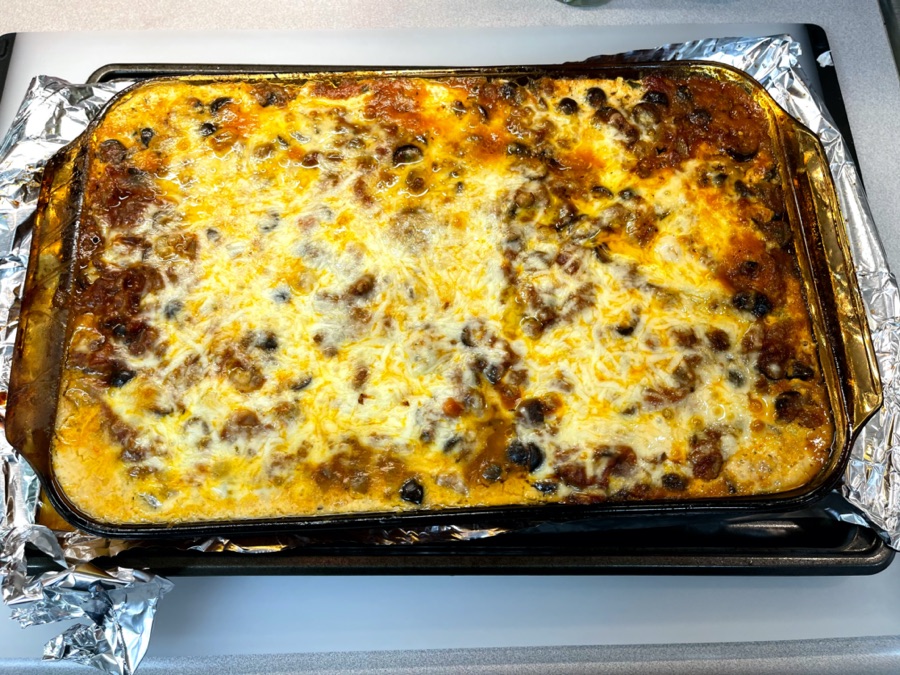 We really enjoyed dinner this evening, and it seems if you make it yourself, it tastes even better. Mary was a little tired today, so we hit the sack early. She was ready in her room as I passed by on the way to mine.  Ha, I had the baby in tow, and I took him out while she was getting ready for bed.

Just an old retired guy trying to finish out my last years on this planet loving my best friend and wife, having fun, learning, and passing on helpful things to others.
View all posts by Paul →
This entry was posted in Cooking, Food and Wine, Fun, Working Around House. Bookmark the permalink.
Powered by Maribol IMDB Plugin