Recovery Day #1; She Is A Slave Driver

It’s a little known fact that surgeons are actually outstanding comedians!  They always leave their patients in stitches!

Yep, today I begin the recovery, and Mary made sure I did the exercises.  She packed my knee in ice and then she proceeded to get the whips and chains bellowing out the count as I had to do 25 reps of horribly painful exercises.  OK, maybe it was not that bad.

We continued watching Julie and Julia on TV before breakfast (brunch).  It was a super feel-good movie, and it is about cooking, our favorite activity right after dancing.  Scout wanted to watch the movie also, so he jumped up and found a spot. 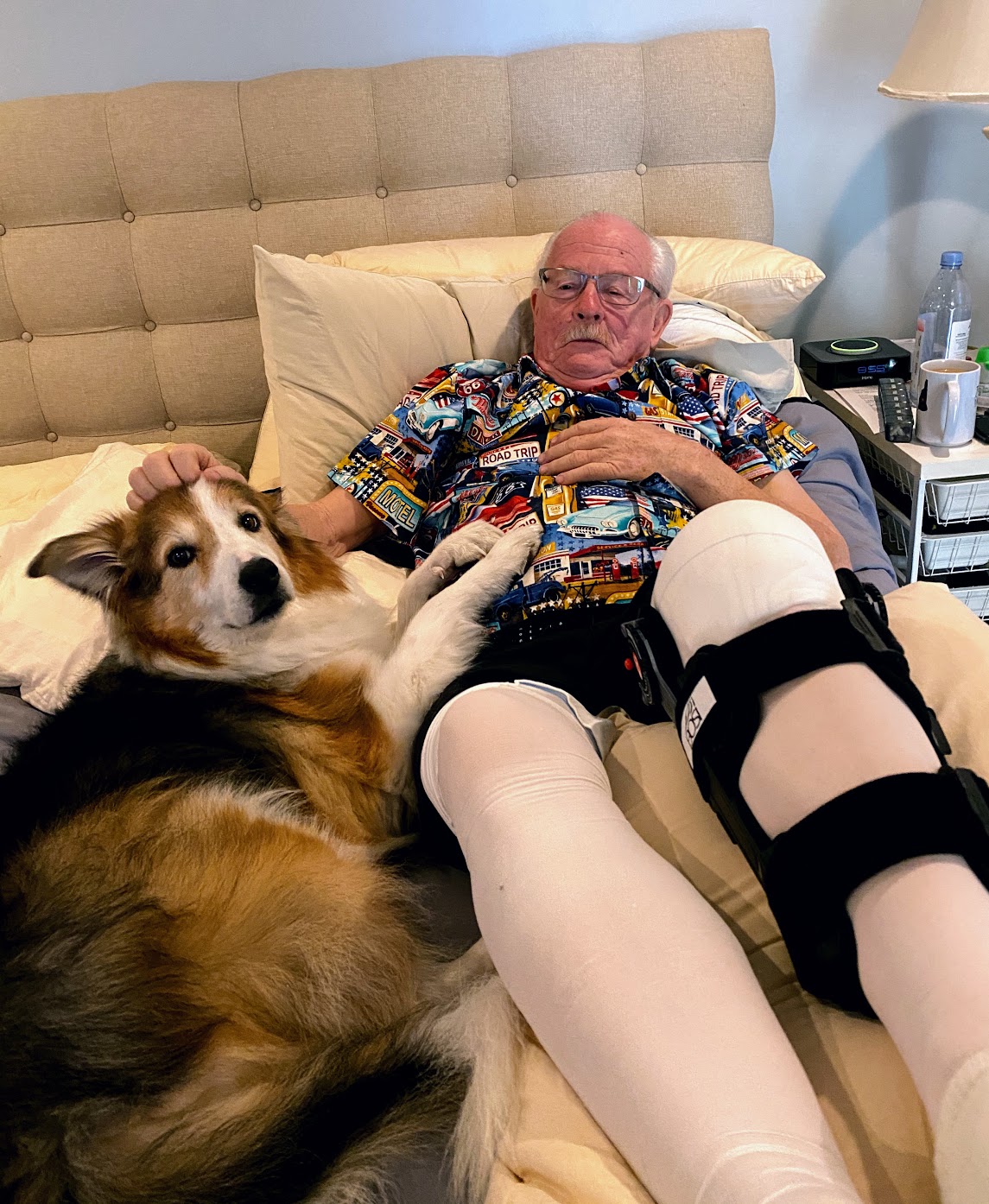 Julia Child’s start in the cooking profession is intertwined with blogger Julie Powell’s 2002 challenge to cook all the recipes in Child’s first book.

Robin came over, so we had to do some cooking, which meant a trip to the store.  Mary would not take me unless I rode in one of those electric carts which the fat old ladies ride in.  I was totally embarrassed, but I chose embarassment instead of staying home alone.

I did get even with Mary because I made car sounds, braking sounds, and did wheelies all around the store. I even sputtered and yelled, “Help, I am out of gas,” and of course, Mary yelled back, “Head for the Mexican food section!”

I was expecting something like the picture below as we drove up to the parking lot. 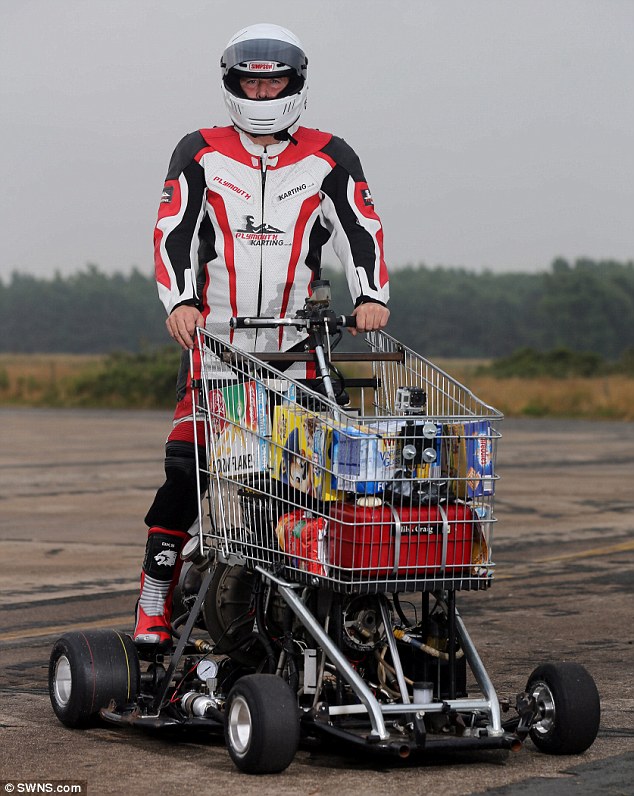 Alas, my wheels were a little more subdued!

My dream was crushed when I got a .005 HP cart with a top speed of 0.6 snails. Oh well, at least I was allowed to go shopping. 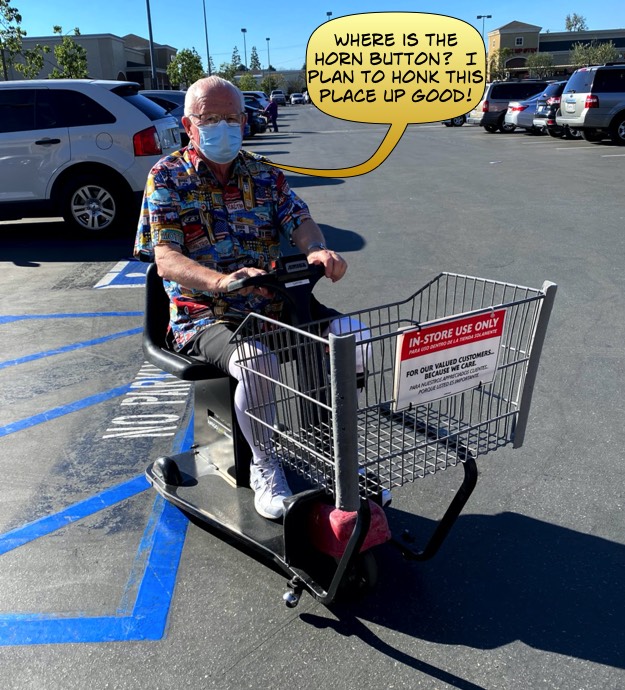 We got everything we needed and then some more.  So it was time for checkout, and we brought a big bag of wampum.  I reminded Mary that a bargain is something you can’t use, at a price you can’t resist.

I followed her to the checkout beeping and hinking the entire time.  I think I was getting on her one nerve! 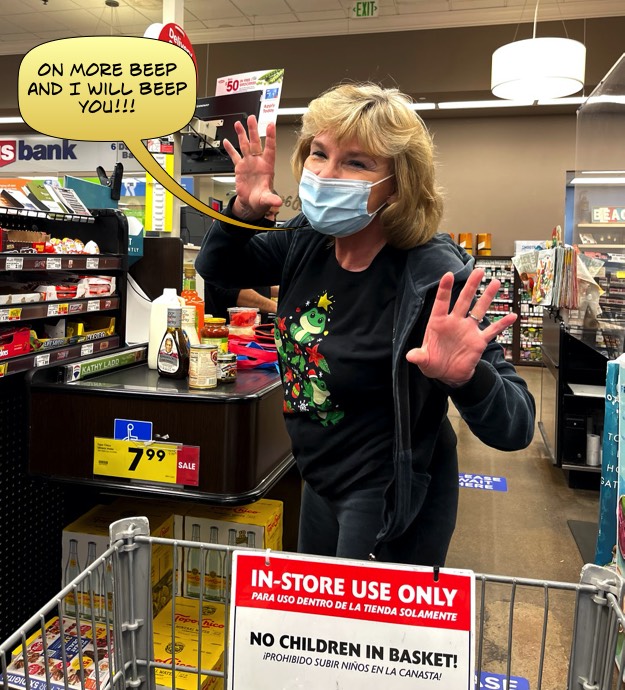 After putting everything away, Mary started the puzzle.  Robin, Mary, and I are puzzle people.  This picture on the puzzle was from a trip to the Indian Restaurant visit last year at Halloween.  I sent the picture to Amazon and got a customer puzzle made for about $10. 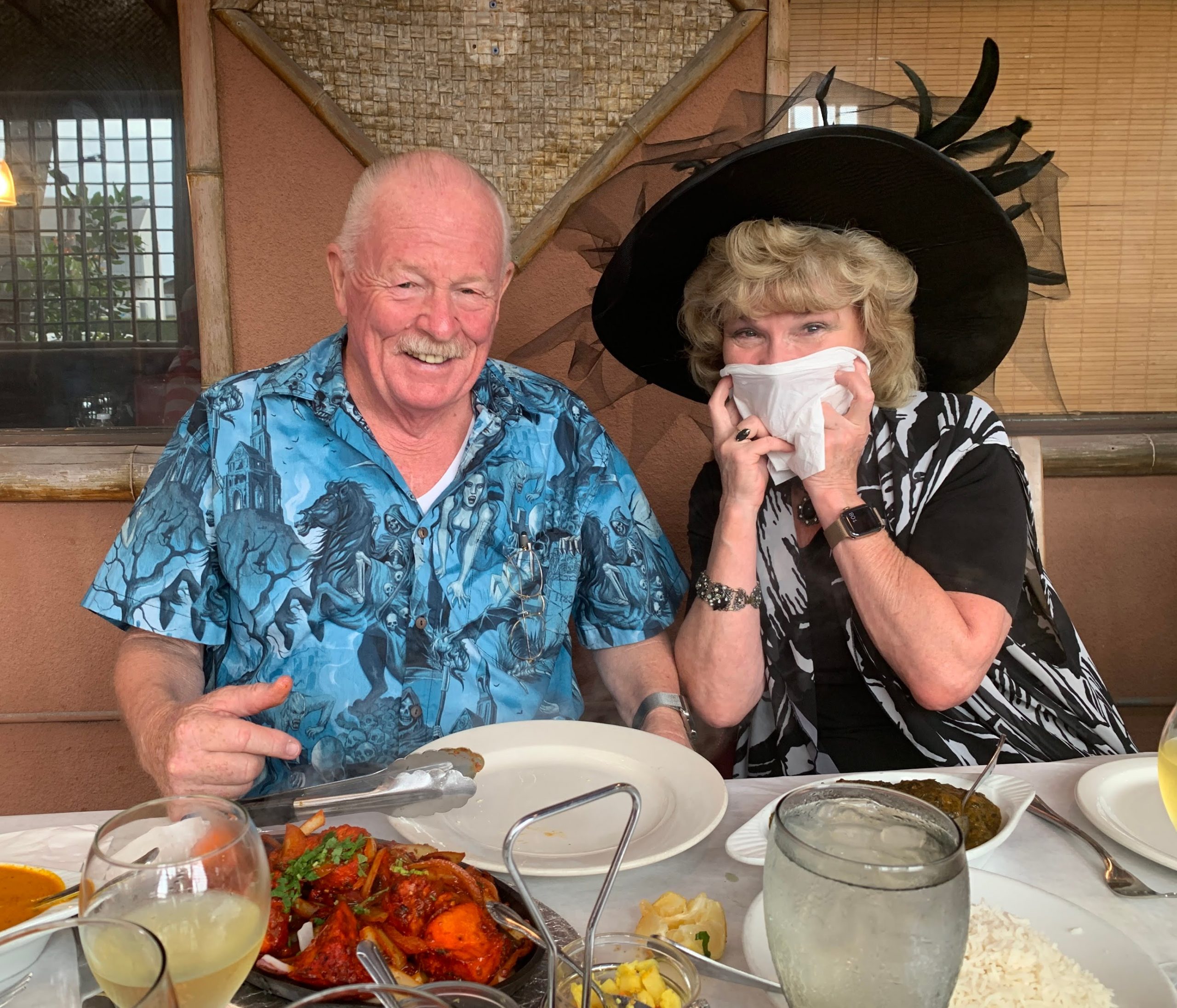 My very spicy meal gassed everyone at the table.

I like all sorts of puzzles, like jigsaws and crosswords, but dot to dots are where I draw the line. 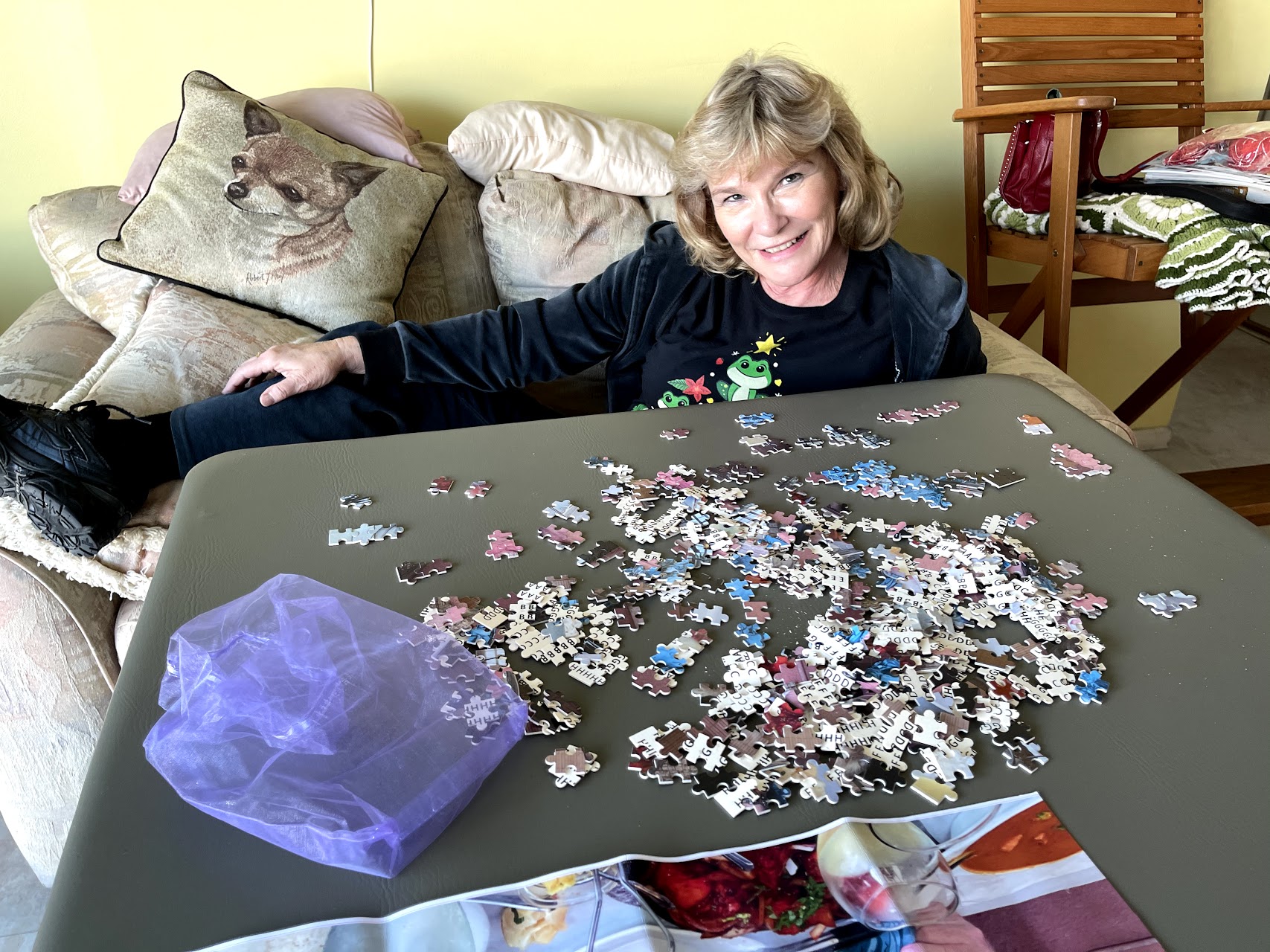 It was a puzzling experience!

When Robin arrived, I was left in the kitchen alone.  The picture on the bottom of the table is our puzzle.  I always find completed jigsaws to be quite relaxing. Very piece-full. 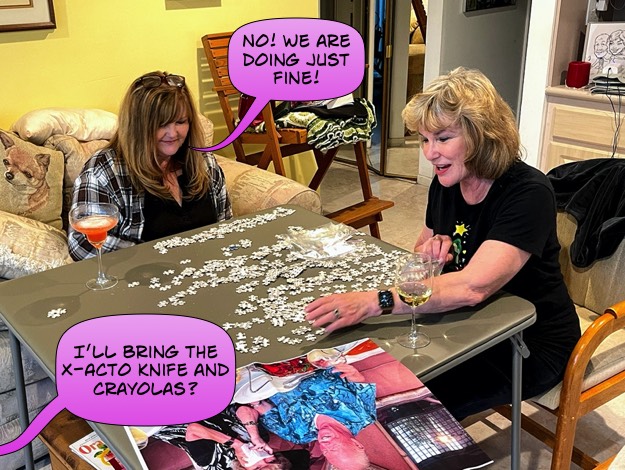 Puzzle people a work. I just offered some help from the peanut gallery!

Dinner was fantastic, oh my, the food kept on coming.  Mary made a casserole with eggs, cottage cheese, spinach from the garden, and all sorts of other goodies.  We defrosted and cooked up three big T-Bone steaks,  plus we started with artichokes.  We were officially stuffed!

Robin brought a cherry pie, but we were so full, it stayed in its box. 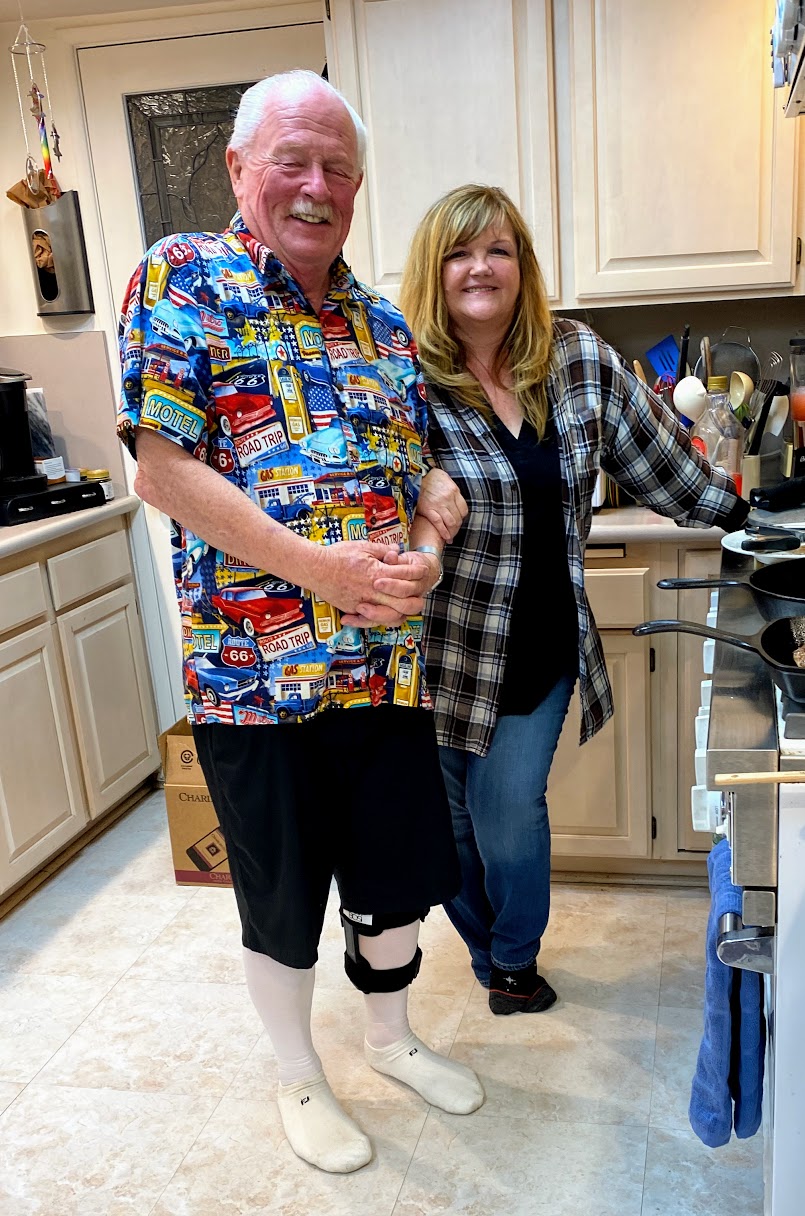 Robin watches the old man cook up a storm!

At dinner, I suggested we watch “How The West Was Won,” and the motion passed.  Scout, of course, got his favorite position next to us. 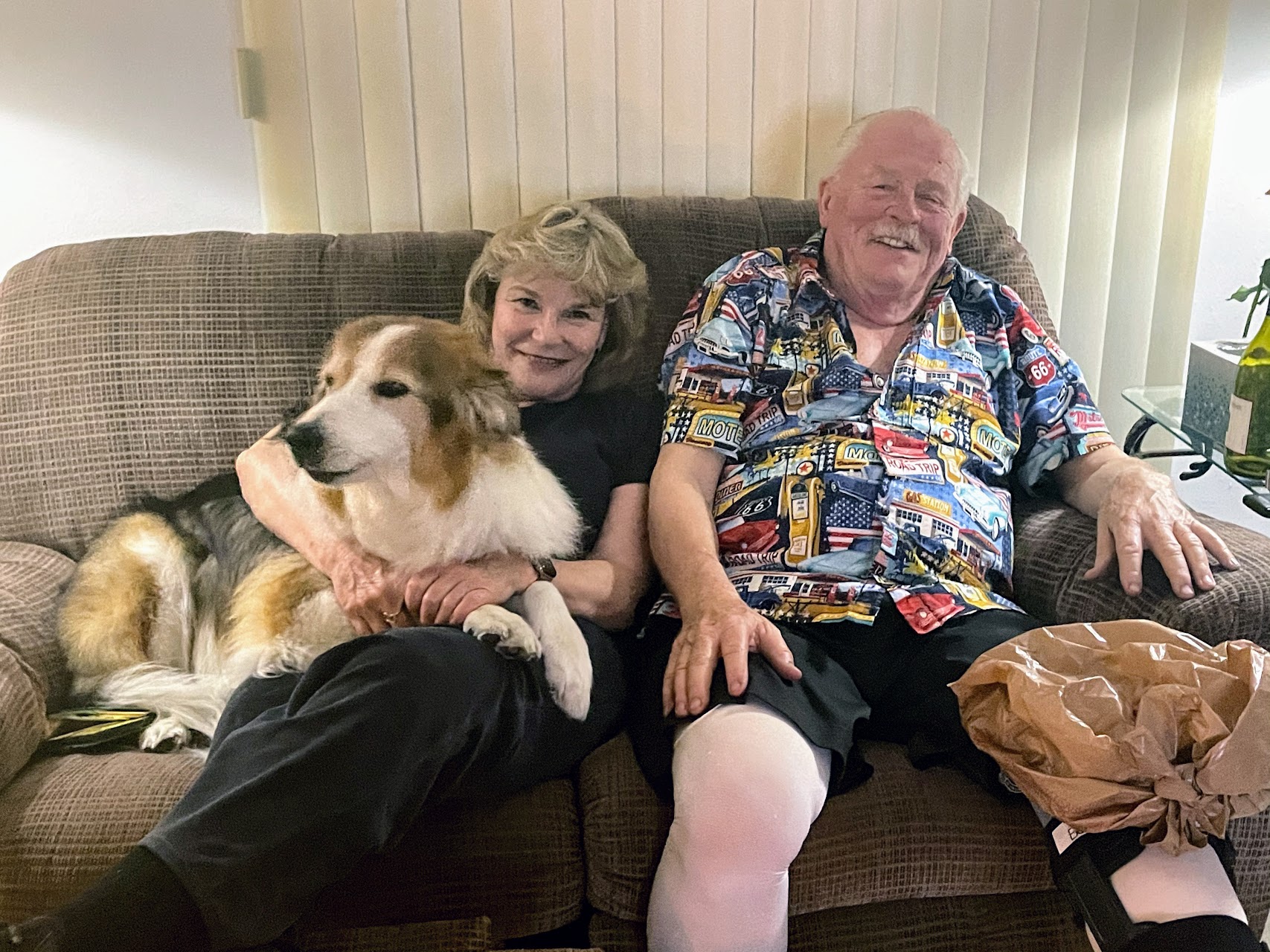 Mary and Scout join me for “How The West Was Won.”

How the West Was Won is widely considered one of Hollywood’s greatest epics. The film received widespread critical acclaim and was a box office success, grossing $50 million on a $15 million budget.

By 11:00 PM, the girls had hit the sack, so it was just Scout and me to finish off the movie and get ready for bed.  I was surprised that Mary and Robin weren’t at the puzzle table when I walked by.

Just an old retired guy trying to finish out my last years on this planet loving my best friend and wife, having fun, learning, and passing on helpful things to others.
View all posts by Paul →
This entry was posted in Cooking, Family, Food and Wine, Working Around House. Bookmark the permalink.
Powered by Maribol IMDB Plugin