What do you receive when you ask a lemon for help? Lemonaid.

This was an interesting day.  I headed to Mary’s early and had breakfast.   As I entered the den, I spotted what seemed to be the remains of a chicken fight.  I asked Mary if she was running an illicit rooster fighting ring.

Then I remembered that just before going home last night Mary showed me her black feather boa that she might wear to the dance Sunday.  Apparently, upon seeing me at 9:00 PM, the poor boa got nervous and dropped some of its feathers. 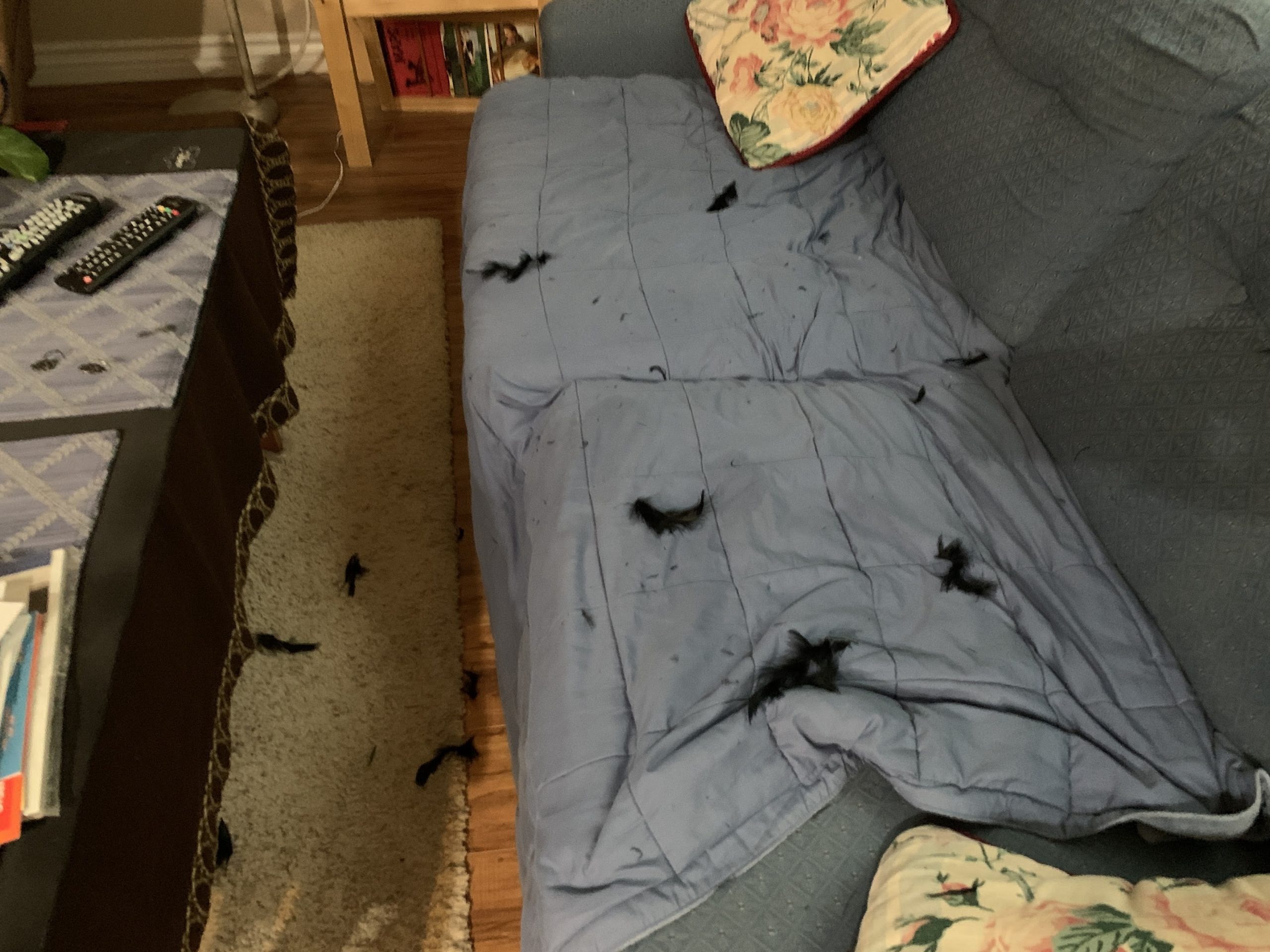 The fireplace was on, and the house was toasty.  It would be a great morning to sit around in jammies and do nothing, but alas, I had work to do, Mary had a hair appointment and I left my jammies at home! 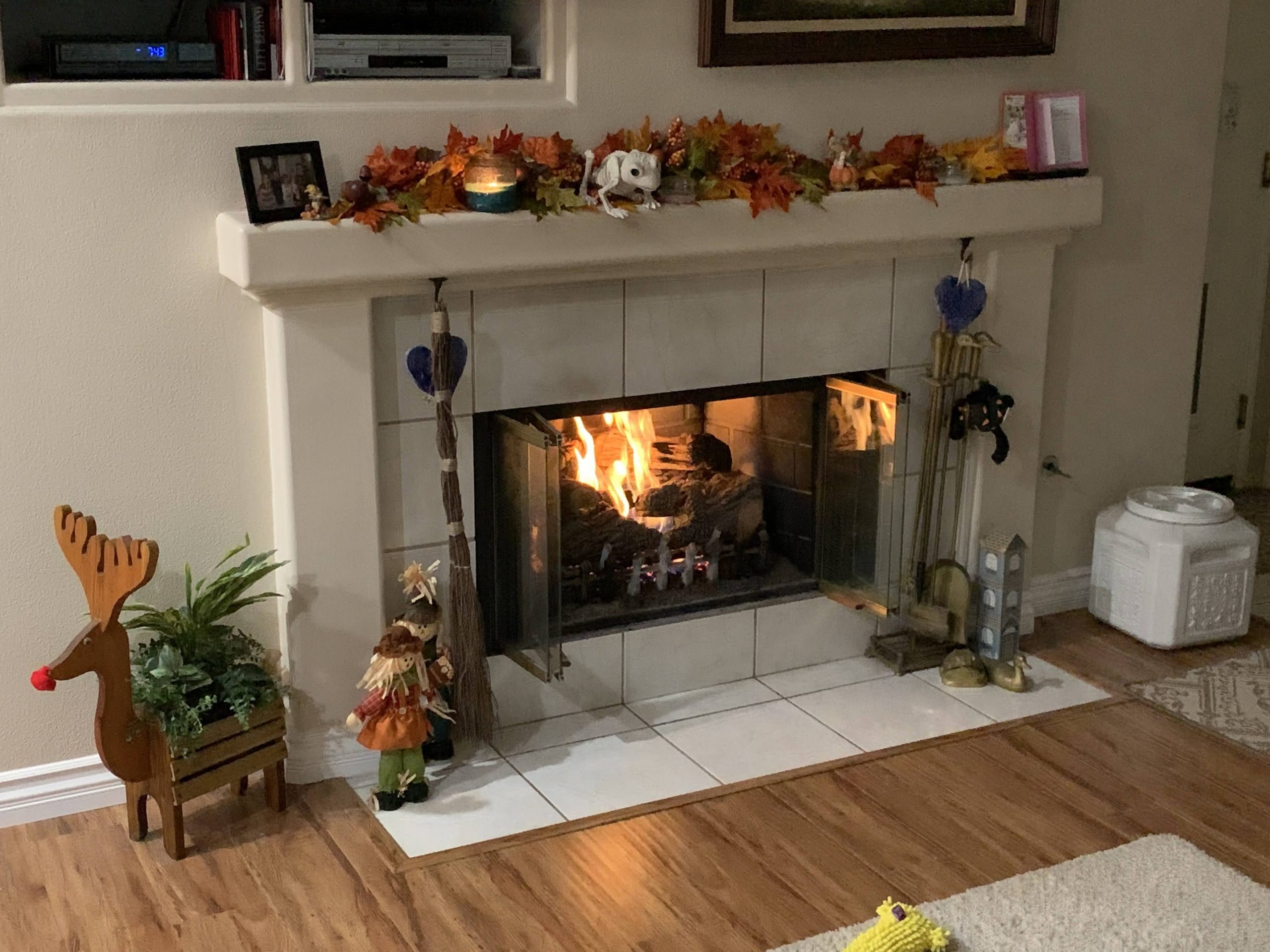 Where are the marshmallows?

She had a hair appointment, so she was going to be gone for a while.  I decided the gazebo needed some lights, so I attached a set of LED lights to the gazebo while she was gone.

Before starting the work, a big black cloud floated over my head and unleased a serious downpour.  Scout and I huddled under the gazebo waiting for the cloud to complete its furious outburst.  Finally, after ten minutes, we crawled out from under the table and started with the lights.  It was cold, and my fingers were not working very well, but I got them up! 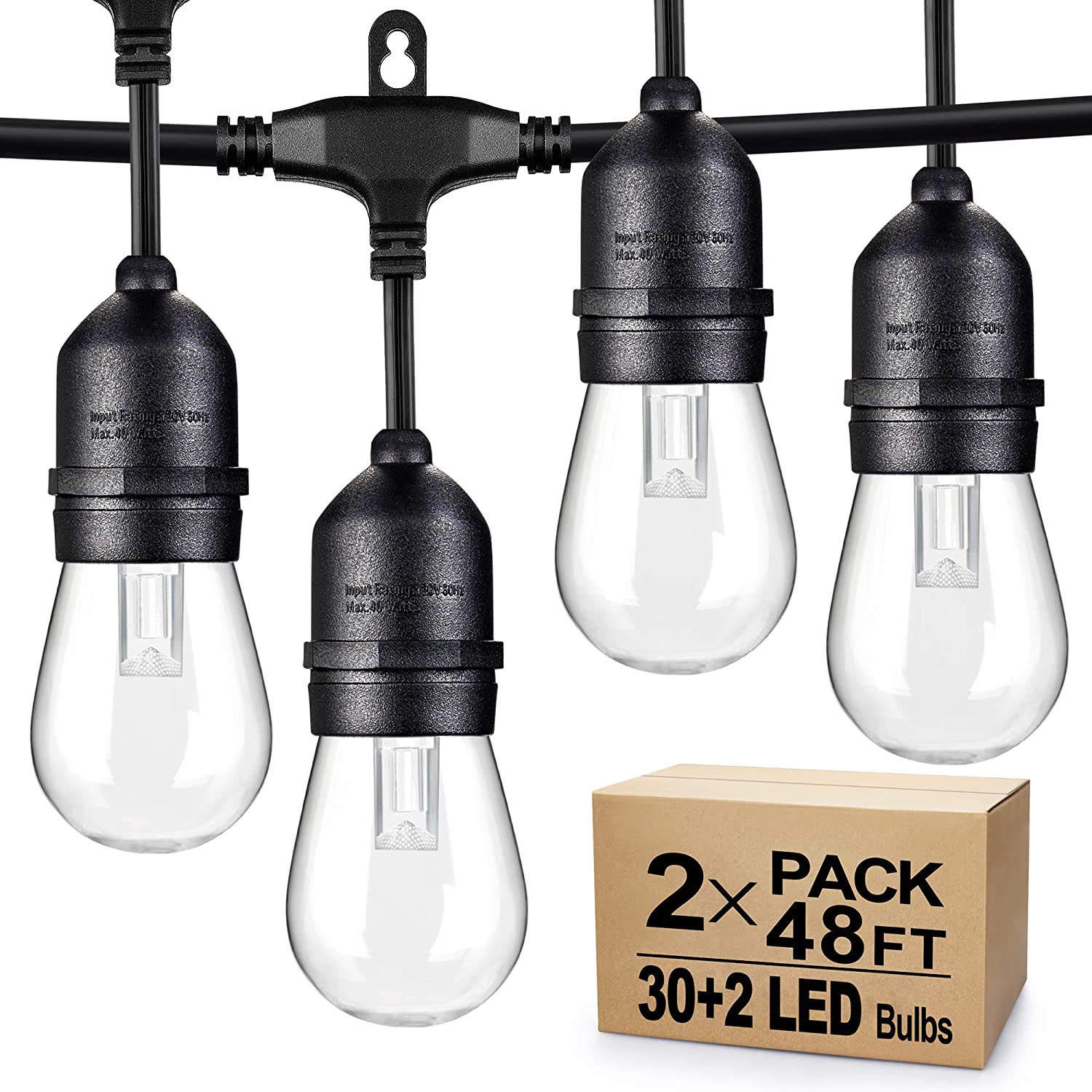 Scout and I hung the lights in the middle of a rainstorm!

After an hour, Scout and I went inside and took a look at our handiwork. We decided it was passable.  Scout got a cookie for his efforts, and I had a cup of hot apple cider. 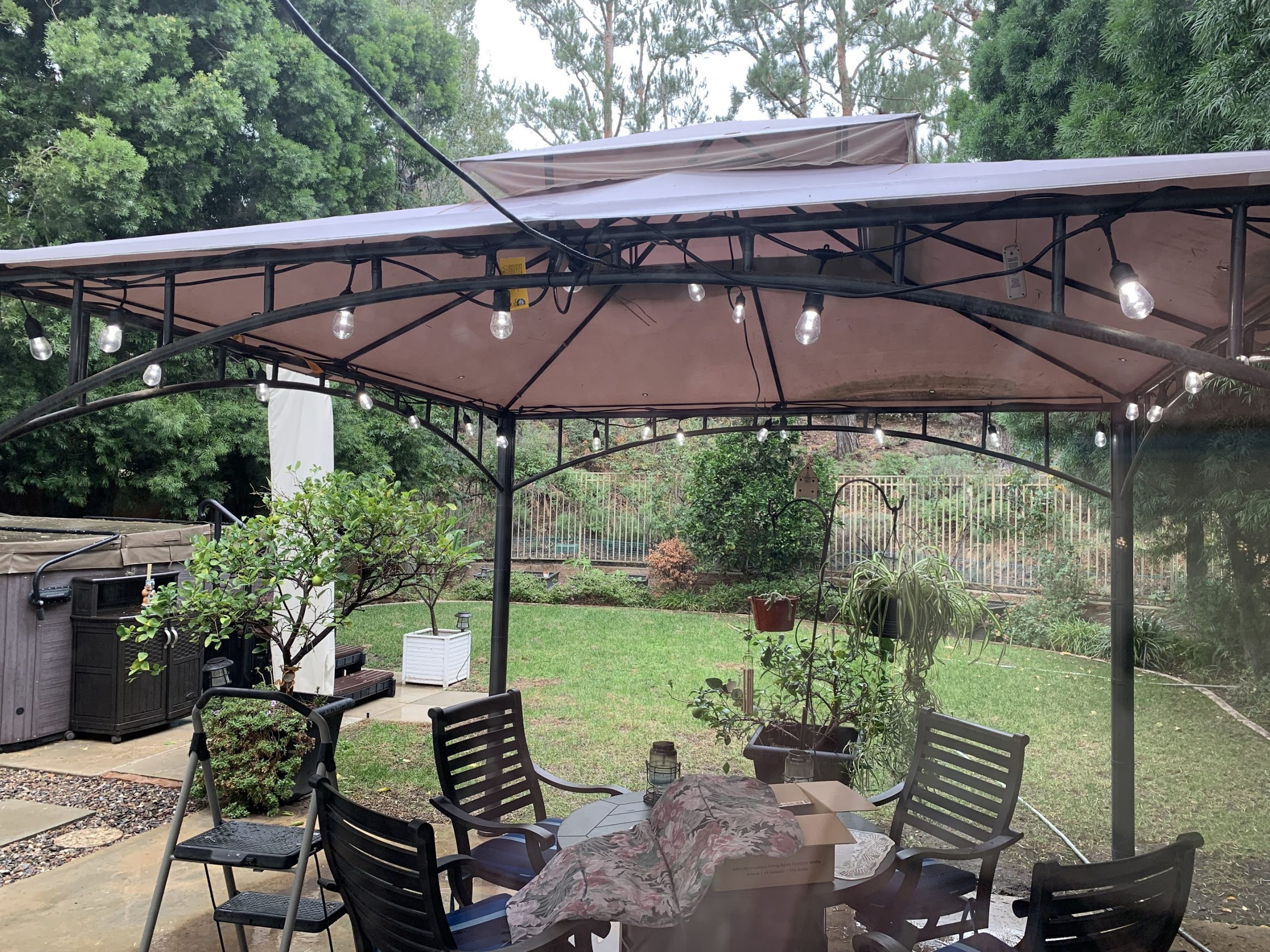 Perfect for dining at night!

After that, I remembered Mary wanted to put some flowers in front of her house, so I decided a Home Depot trip was needed.  Off I went and found the place easily as I am getting to know Orange quite well.  I picked out several Venus Flytraps, a Happy Alien Flower, and a Hooker’s Lips Flower.  As I approached the checkout stand, I thought better and decided these might be a little too weird. 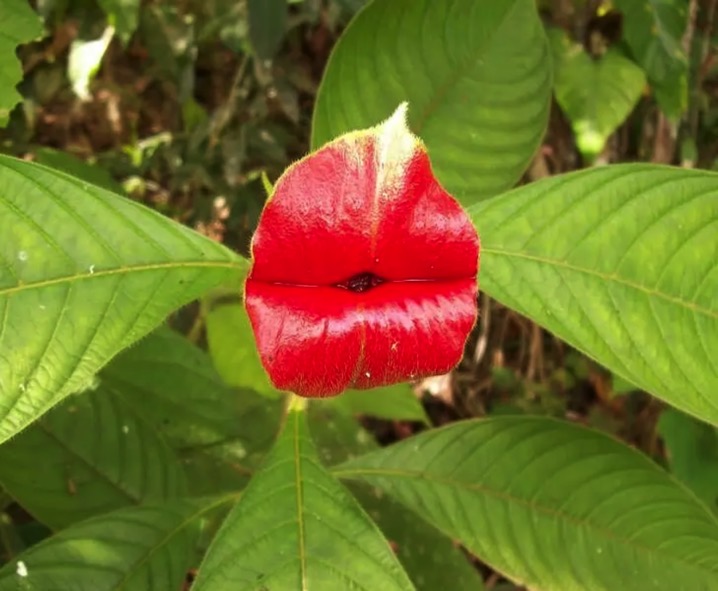 The Hooker’s Lip flower certainly lives up to its name!

I returned the plants to their place on the shelves and opted for the more mundane, but certainly acceptable, common pansies, mums, and petunias.  As I drove in the driveway, it began to rain again, so I quickly sat the plants out and will plant them in the ground a little later.

Mary returned with dazzling hair, much too pretty to have to sweat over a hot stove.  We went through our lists of favorite places to dine and came up with the Rib Trader on Chapman.  We arrived just before 5:00 PM, and Jim, the bartender, was at work.   We proceeded to keep him in stitches for the next forty-five minutes while our orders were being prepared.  We were almost in pain as we laughed so hard. We had a little wine while we were waiting.

Finally, Mary’s huge 24-ounce steak was ready.   After seeing the price on the steak, I decided fish was in my future.  I ordered three sardines, extra small served with a side of lettuce, sans dressing.  I made it out of there with twelve cents in my pocket; Jim didn’t think much of the twelve-cent tip.

We took our meals home, sat by the fireplace, and watched The Ranch.  I sat right next to Mary and observed the steak slowly disappearing bite my bite. 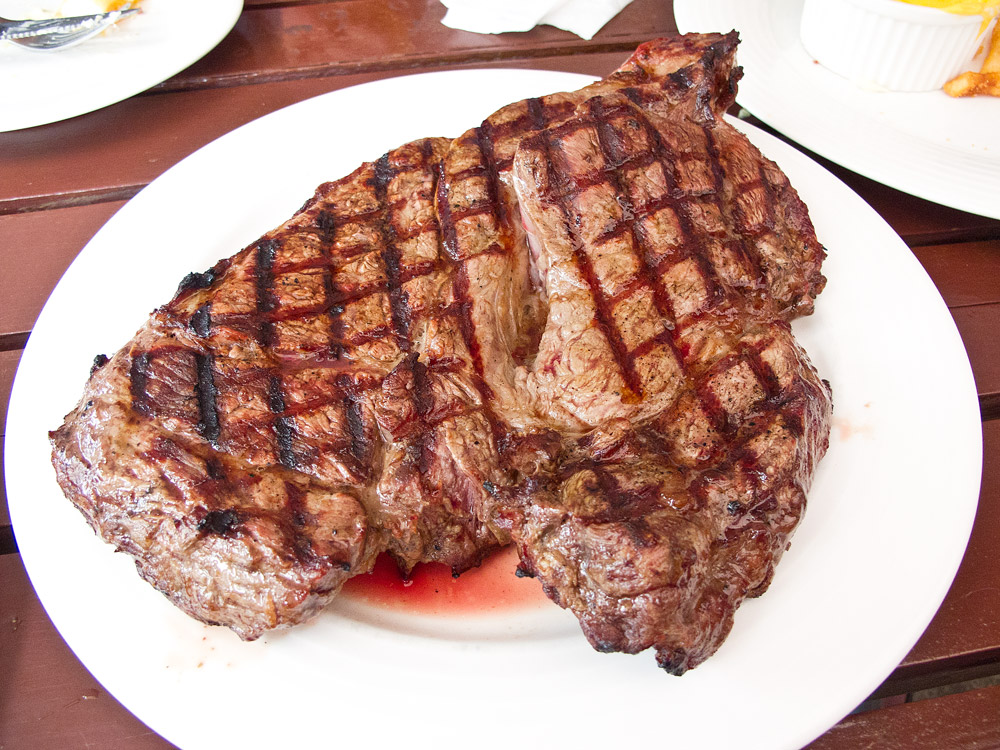 It was humongous, it could have easily attacked Detroit!

Being the gentleman I am, I only drooled slightly and cried as the last of the steak disappeared.  Me and my sardines did well; I stretched them out over thirty minutes so as not to finish too early.  After getting the magnifying glass out so I could see the little sardines, I asked Alexa to set the timer for ten-minute intervals.  Then with surgical skills,  and with great gusto, swallered them suckers one at a time! 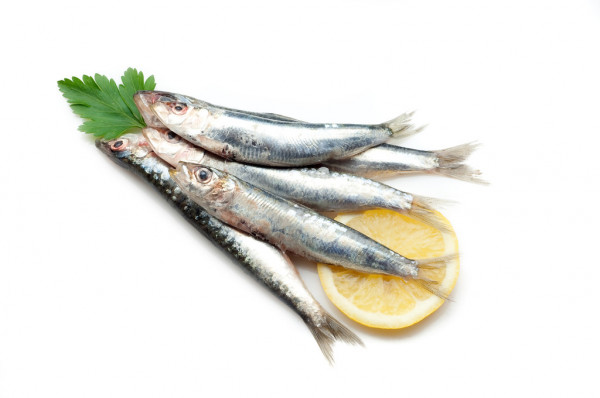 I acted like I was full when Mary offered me a piece of gristle from her steak.

We cleaned up the dishes which was easy.  Mary’s platter that held the 48-ounce steak was done in a flash.  My plate, which was paper by the way, as it only needed to hold three sardines went right in the trash. Poof; we were done!

Before turning on the TV, I had to go to the car and get a map I wanted to share with Mary.  Well. after not returning after ten minutes Mary came looking for me.  It was embarrassing;  I was up in the tree with seven neighborhood cats thinking I was a 180-pound sardine.  Scout chased them off and I came back to Terra Firma and ran into the house.

After dinner, we watched some more of The Ranch before curfew kicked in, and I had to go.  On the bright side, it was not raining when I departed.

Just an old retired guy trying to finish out my last years on this planet loving my best friend and wife, having fun, learning, and passing on helpful things to others.
View all posts by Paul →
This entry was posted in Food and Wine, Fun, Just Us, Working Around House. Bookmark the permalink.
Powered by Maribol IMDB Plugin