The Weekend Is Gone, Written Into The Stone Of History

The past cannot be changed. The future is yet in your power. ~ Mary Pickford

For many years Sue looked forward to the Wine Train event, and we worked weeks on getting everything ready as we took over one-hundred people one year.  Sue was then able to move about the train with little assistance, although I was usually right by her side as she visited every single person, Sue was just that way.

Please note that she is “in uniform” for the wine trip, including the wine bottle earrings; she was ready to taste.  Some days it is almost unbelievable that she is gone. It’s been six months without her being at my side. I miss you, my sweet Sue! 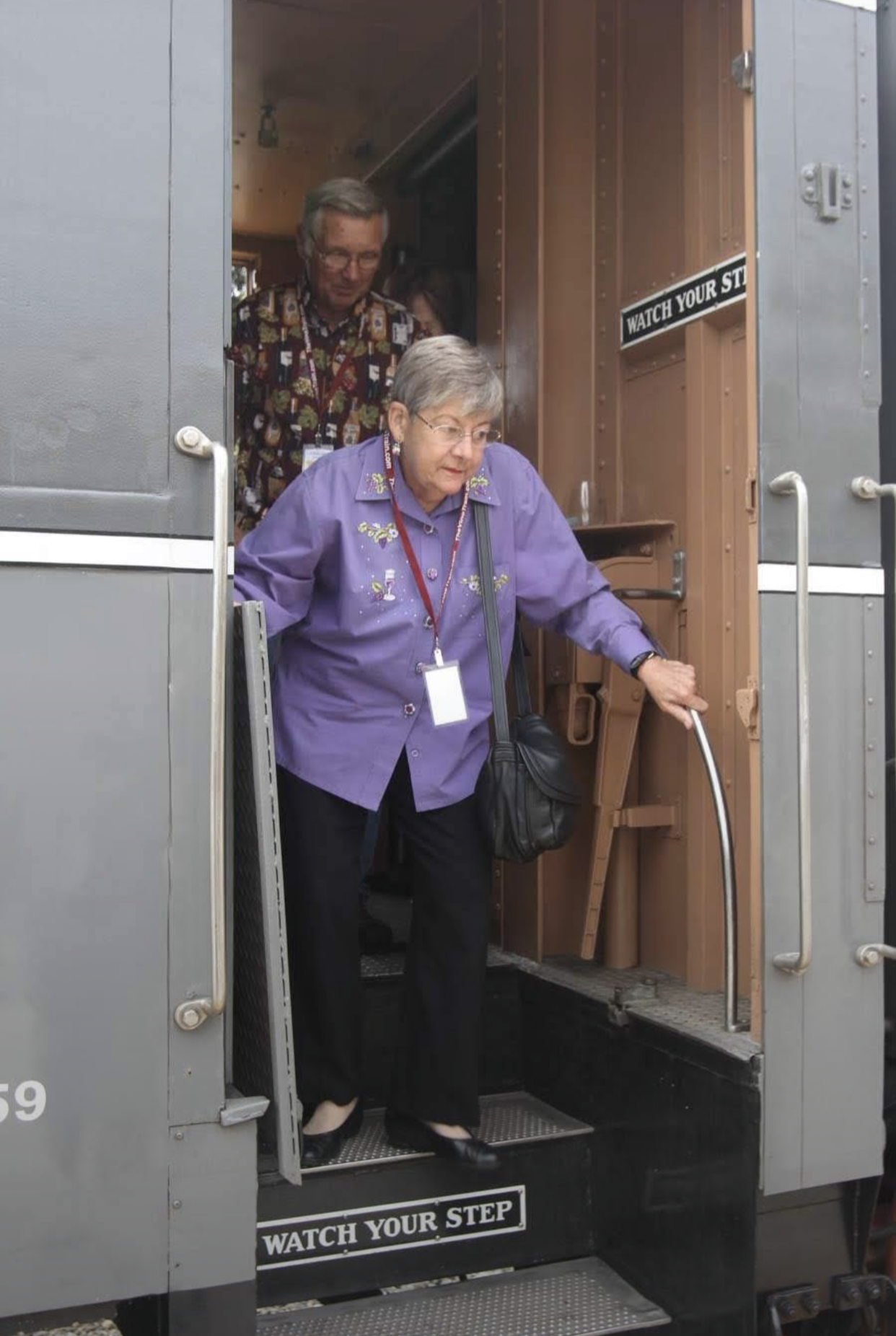 Five years make such a difference in one’s life.

Small chores around the house took all morning.  I never realized how much there was to do about the house, but being alone is an eye-opener.

The Bat Phone called Colleen as it does every morning, and I talked to her and Mark.  They were getting rain, which means HUMIDITY.  We had blue skies and calm winds.

I planned to go to Lake Elsinore, but a friend was coming into town to visit his ailing mother, and I was going to pick him up at the airport.   At the last minute, the plan was scrapped for medical reasons, so I headed to the garage.  The garage is becoming my “bat cave,” but it needs a lot of attention before it will even be a “man cave.”

Before going outside, I called Lisa and Pete, and poor Lisa was having more problems with her ears and a massive migraine headache.  No fun, I could see it in her eyes.

To the garage as I was on a mission. One of the can lights needed some fixes to the surrounding ceiling, and in the living room, there were two holes high on the wall where we used to have a video projector mounted.

This repair task called for nerves of steel and a small amount of spackling compound.  The nerves of steel were required as a ladder was needed since the holes were about nine feet up the wall.  I took every precaution, including packing my parachute, laying fluffy pillows around the base of the ladder, wearing four thick coats plus three pairs of pants, and having 911 on speed dial!  At my age, I often forget the phone number of 911!

Did You Know? Spackle is a registered trademark of the Muralo Company, located in Bayonne, New Jersey. Muralo’s product is a dry powder, to be mixed with water by the user to form putty or paste. It was brought to market in 1927, then patented and trademarked in 1928. The term “spackle” has since become a genericized trademark applied in the United States to a variety of household hole-filling products. (Such products may also be referred to as “spackling” compounds.)

The first written appearance of the generic use of the word “spackle” was around 1940. The product name was likely derived from the German word spachtel, meaning “putty knife” or “filler.” Other possible origins include Russian (tr. shpaklevat; to fill holes with putty or caulk), Polish szpachla (spatula or putty knife), and Yiddish spaklieven (to fill in small gaps in plaster), all of which are likely derived from German.

Within a half-hour, all was done, and the mess put away.  A small amount of touchup paint and it will be invisible to the naked eye; my eyes are never naked nor the rest of me for that matter. 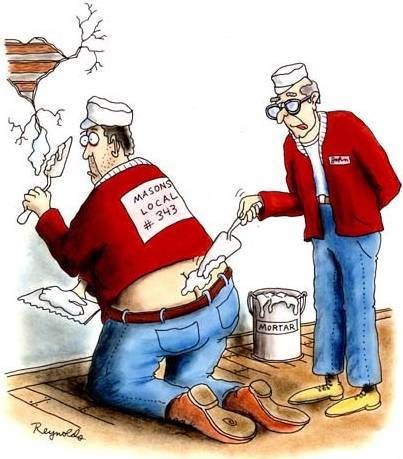 Now you know why I do not ask people to visit me when I am repairing the wall!

Mary texted and asked if I wanted to have calzones for dinner, and after a long afternoon with chores, it sounded terrific.    I got cleaned up and headed in her direction.  I had no idea how to make a calzone, but upon arriving, she was just about to form the dough. I dived right in and attempted to assist.  The mixture was perfect, and we experimented with the use of hands or rolling pins.

The more we made, the better we got and stuffing the little pies.  I mentioned that my mother loved these and called them “stuffed stockings.”  With the help of Google, we learned that calzone is the augmentative form of the term ‘calza’ which means stocking. Silly me, Mom is always right! 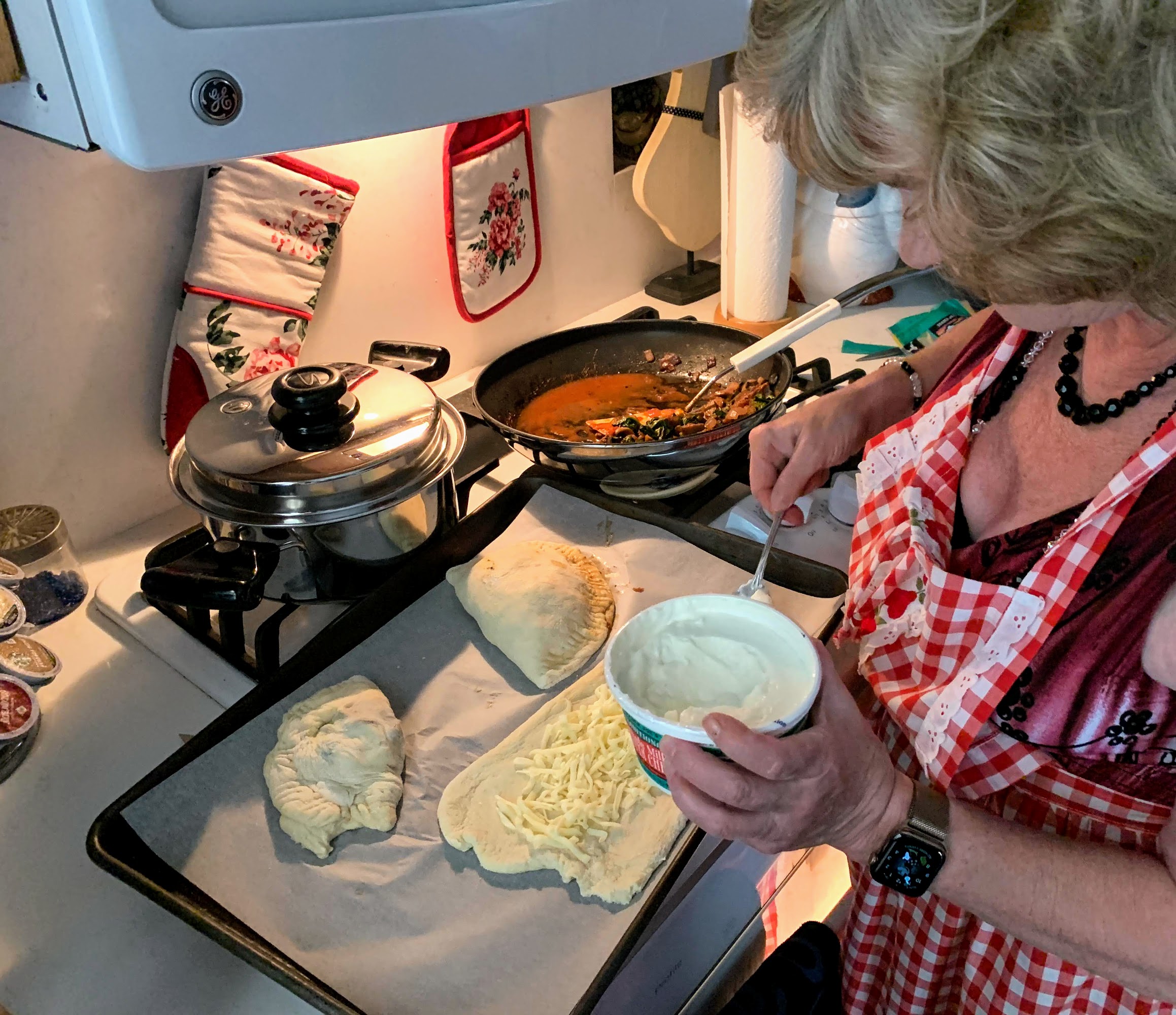 Plenty of cheese is a definite requirement.

Did You Know? A calzone (Italian: [kal?tso?ne]; “stocking” or “trouser”) is an Italian oven-baked turnover made with folded leavened dough. It originated in Naples in the 18th century, although, according to the Slow Food Foundation, it was also produced in Basilicata around the same time. A typical calzone is made from salted bread dough, baked in an oven. It is stuffed with salami, ham or vegetables, mozzarella, ricotta, and Parmesan or pecorino cheese as well as an egg. Different regional variations in or on a calzone can often include other ingredients that are generally associated with pizza toppings.

Perfectly done, and the color was golden brown. 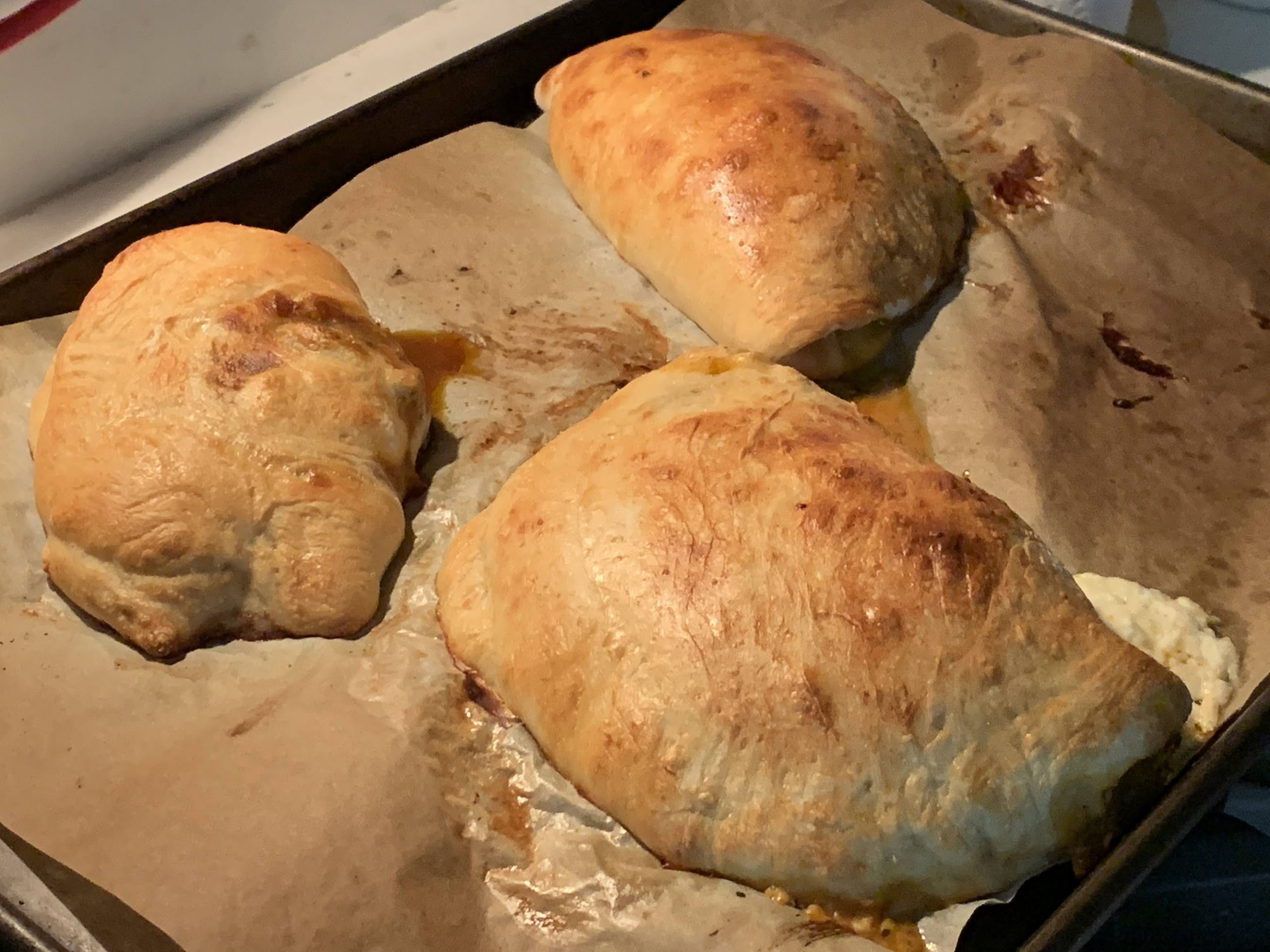 We added an egg wash, and they came out perfectly.

Mary suggested we eat outside as it was eighty degrees with a small breeze.  We had our martini glasses with us, and Scout was going to protect us as dinner proceeded.  We had artichokes with the meal, which was perfect.

We called Jan M. during dinner and chattered at her for almost fifty minutes.  She lives close to Mary, so I performed the delivery service on my way home.   The evening was enjoyable. 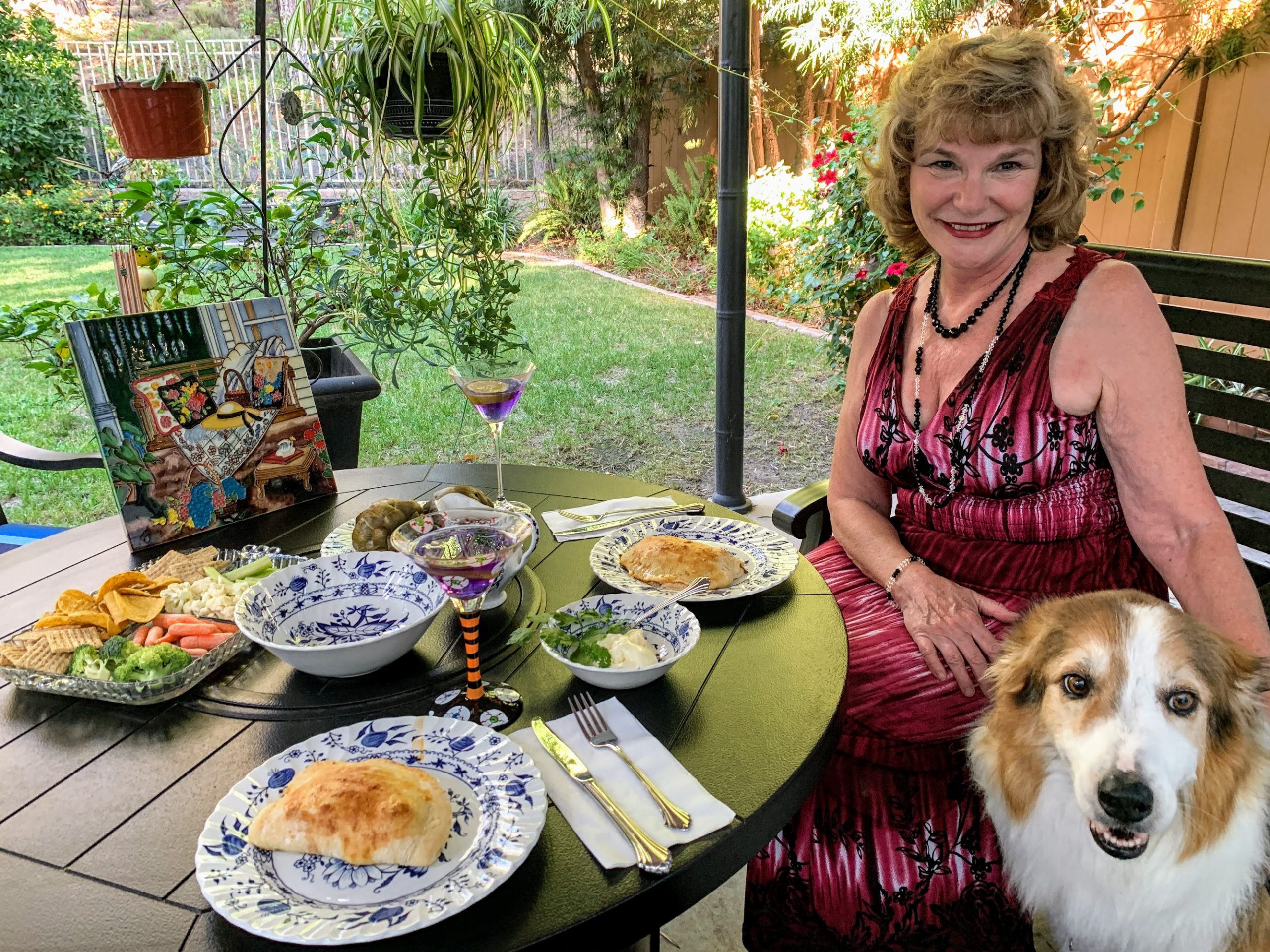 Jan was at the front door as I texted her I was on my way.  Only 3.5 miles from Mary’s to Jans’s so she had the timing just right.  We talked outside for a few minutes before the Grey Ghost and I departed.

Back home, I played with the pool lighting to figure out the sixteen different colors and themes.  The instructions will have to be kept near the switch.

I watched an episode of  “The Middle” and I was a goner!

Just an old retired guy trying to finish out my last years on this planet loving my best friend and wife, having fun, learning, and passing on helpful things to others.
View all posts by Paul →
This entry was posted in Cooking, Dining Out, Food and Wine, Friends, Working Around House. Bookmark the permalink.
Powered by Maribol IMDB Plugin