Day Three Without My Love

“Those we love never truly leave us. There are things that death cannot touch.” 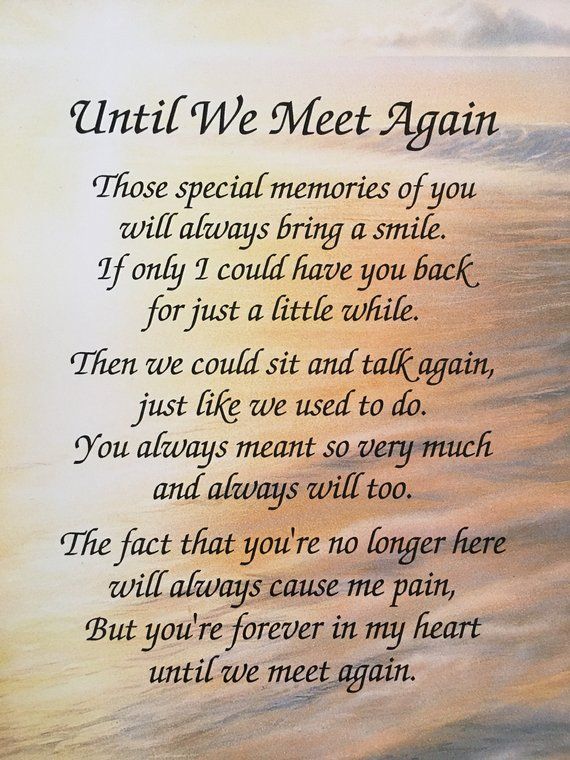 Up and ready to go, but today not to a health care facility. Robin and Colleen picked another of our favorite haunts! Gourmet Pies on Katella was our destination this morning. I did biscuits and gravy. It was quite enjoyable and I only “lost it” a couple of times.  Sue and I always when around 3:00 PM because the crowds had dissipated.

Thank you, Brad and Susie-Q, for the kind note of encouragement to keep the daily diary going.  I did not know how many folks read it since it was just for us (and our failing memories). 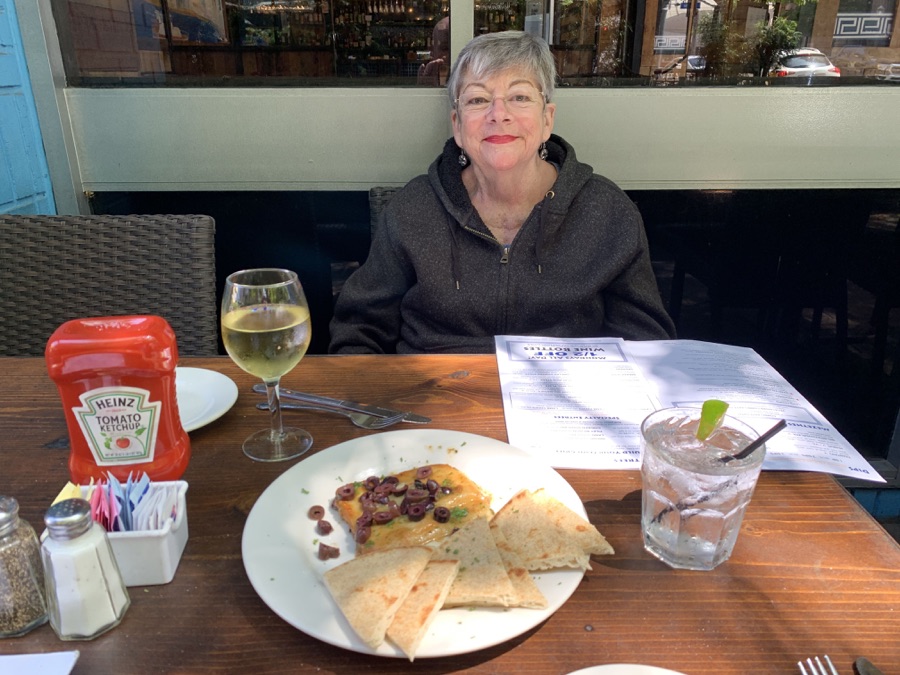 Always happy and kind words for all! We were celebrating her 68th birthday at the local Greek restaurant!

Returning home, I puttered around the house a while before Bob Zaitz dropped by to visit.  Bob and Donna are such good friends. Bob and I walked around the block, and that was good as I realized that my walking needed to start small and build up slowly.  I was out of practice.  I gave Bob our remaining theater tickets as he and Donna always enjoyed the performances, and I am not going to be ready for the rest of this season.

Ed Roberts called, and he just buried his bride yesterday.  We talked for a while and are going to get together in a week. He and I can do a lot together as we share similar interests, wine, and tools!

Colleen and I are going on a road trip at the end of next week.  Up to Stockton to see Aunt Kaye as she is 97, and I wanted to see her before anything happens.  Sue’s back was so bad towards the end that riding in the car was painful even for short trips around town. 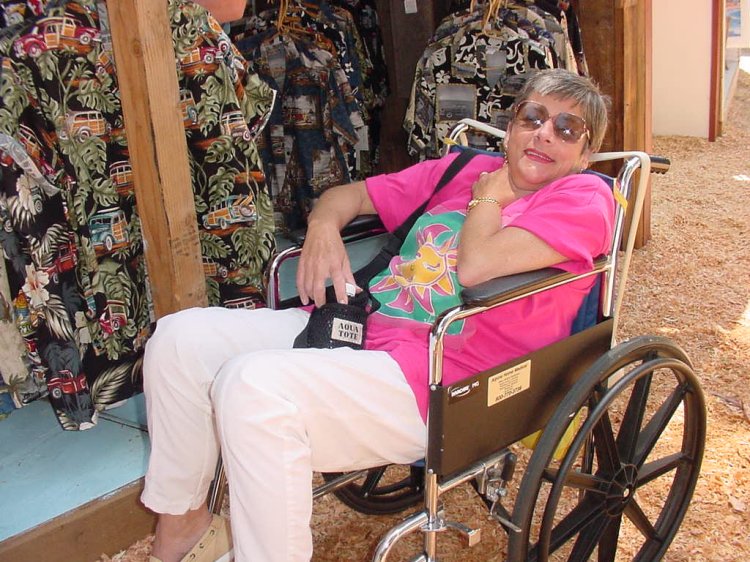 At the Sawdust Festival in 2001

My poor garden needed some attention, so I began preparing one of the beds for planting.  In the middle of that, the trusty iPhone rumbled, buzzed, and made a burping sound.  It was Diane, Sue’s sister.  Well, she finally lost it, the loss hit her, and she cried all morning.  She decided to work in the garden and recommended I do the same.  I texted back that “Great minds think alike” and that I was in the garden doing just that!

Sue and I decided long ago there would be no big fuss when we pass. Sue’s ashes will be added to the Pacific Ocean during the first week in April so Diane and family can come down from San Jose.  The exact date is unknown, but Colleen and Robin in coordinating that effort. Sue never wanted to be the center of attention.

Despite everything, we are doing a celebration of life for Sue at Old Ranch soon after that so our many friends can say goodbye to this amazing person who touched so many people.  Vicky suggested she might bring a birthday cake (an inside joke, ask Vicky).

I took a nap around 4:00 PM, but it did not last very long.  I can’t seem to sleep.  However, I saw a beautiful thing when I woke up.  In the office, I heard some talking, and when I came around the corner, it was Lisa, Robin, Pete, and Colleen sitting in front of the computer doing Sue’s obituary. Sue would have been proud of these kids.

Tonight was a Topper’s dance, and I could not go.  Too soon! I saw Vicky leaving and told her I could not do it tonight.  She found a picture of Kathy and Sue and put the picture in a frame with the dates of their passing.  I lost it again! 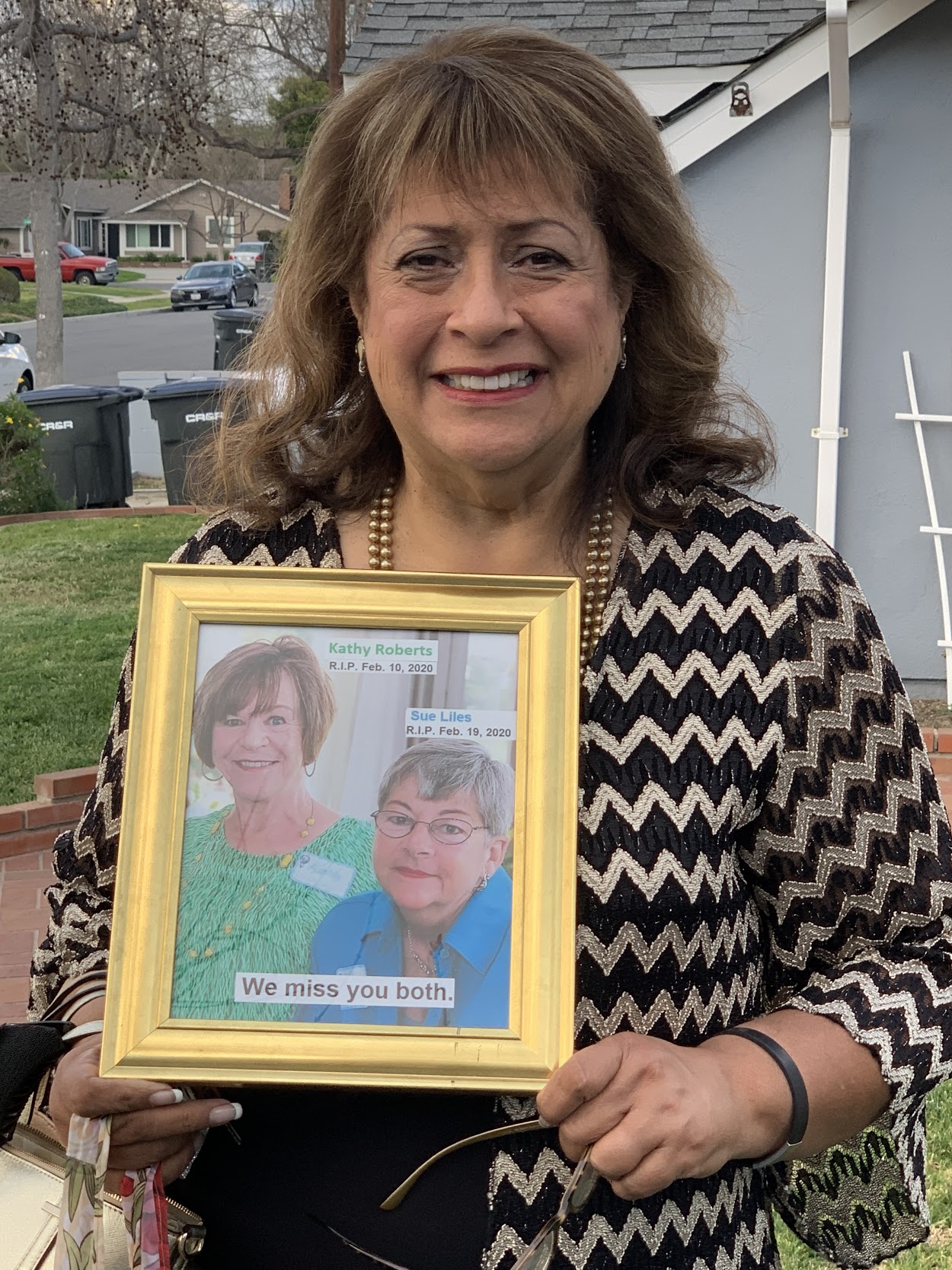 The kids took me to Taco Surf, where Sue and I ate at least once a week and where I got her food when in the local hospital.  Robin and Bob, Pete and Lisa, Colleen, Connor, and I enjoyed a nice meal and let the staff know what has happened.

OK, after all these years, I now know that Sue owned 142 pairs of shoes!  I attempted to put my shoes in one of her shoe racks in the closet, and they would not fit.  I decided to count her shoes! She could have outfitted two and a half centipedes!

On our way to Taco Surf, I offered Robin a coat.  Well, it was Sue’s favorite coat that Robin gave Sue at Christmas time!  Robin lost it, I lost it, and Robin is keeping it, which I thought was terrific!  Sue would be thrilled about that! 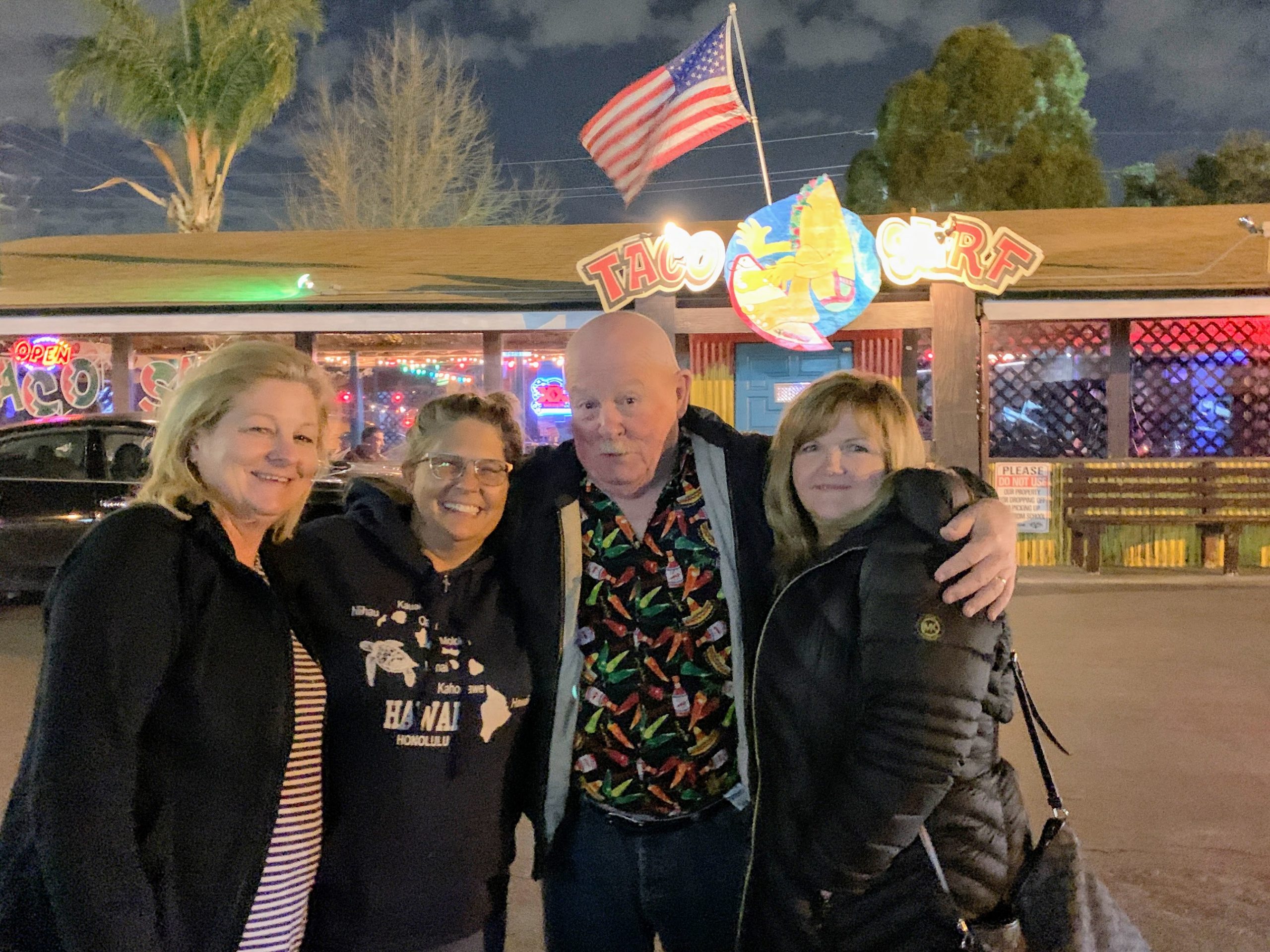 We returned home and sat around the old dining room table and talked for another couple of hours.  Everyone except Colleen departed, and we were alone by 11:00 PM.  I did a couple of Odessey 1908’s and fell asleep immediately after turning on Sue’s new TV.

All in all, it was an “OK” day.  Having my family around was something I needed.

Just an old retired guy trying to finish out my last years on this planet loving my best friend and wife, having fun, learning, and passing on helpful things to others.
View all posts by Paul →
This entry was posted in Dining Out, Family, Food and Wine. Bookmark the permalink.

1 Response to Day Three Without My Love