Off To Lunch At CPK

Traveling by steamboat was considered the height of comfort. Passenger cabins on the boats were not numbered. Instead they were named after states. To this day cabins on ships are called staterooms.

It’s mid-week and time to celebrate… Now that we think of it, every day is a time to celebrate! Today we are joining Robin at CPK down near the plant (Westminister and PCH).  When we showed up, a lady was waiving at us but it was not Robin…  It was Teresa Brenner, a long time special friend.  She was always a bright light in the dark tunnels at work!

Did You Know? California Pizza Kitchen (CPK) is a polished casual dining restaurant chain that specializes in California-style pizza. The restaurant was started in 1985 by attorneys Rick Rosenfield and Larry Flax in Beverly Hills, California, United States.

In 1985, Flax and Rosenfield pooled $200,000 in bank loans and savings along with $350,000 invested from friends to lease space on Beverly Drive in Beverly Hills, California. The first menu, including the famous BBQ Chicken Pizza, was developed by Ed LaDou, then the pizza chef at Wolfgang Puck’s Spago restaurant. CPK became an immediate success, and the company expanded throughout Southern California. By 1992, there were 26 CPKs.

We sat and gabbed for an hour before they had to go back to work!  Not too much farther until they will be retired and joining us!  After lunch we headed home and waited until Adrianne and her crew were about to show up.  We, of course, watched Grey’s Anatomy.  At 3:45 PM we headed to Old Ranch and sat by the fire.  PAul ate again although he should have NOT eaten!  We killed off a bottle of wine before heading for home. 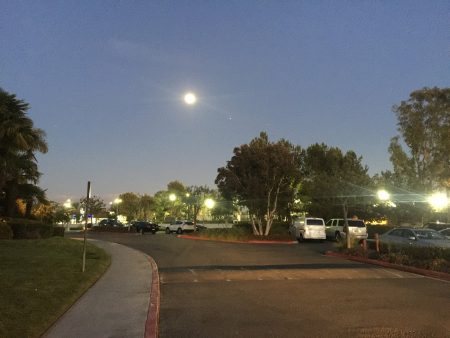 …as we departed the moon was rising!

When we arrived home we got ready for an evening in front of the tube!  We watched “Scorpion” which is a goofy series but we like the characters, we then went to NCIS New Orleans, and finally back to Grey’s Anatomy.  We crashed at 11:00 PM.

Just an old retired guy trying to finish out my last years on this planet loving my best friend and wife, having fun, learning, and passing on helpful things to others.
View all posts by Paul →
This entry was posted in Friends and tagged Friends, Old Ranch, TV Movies. Bookmark the permalink.
Powered by Maribol IMDB Plugin