We went to our golf class at 9:00 at El Dorado and then to lunch at Old Ranch in preparation for golf.  Sue loved today at the club becuase we saw many baby ducks.

In 2002, psychologist Richard Wiseman and colleagues at the University of Hertfordshire, UK, finished a year-long LaughLab experiment, concluding that of all animals, ducks attract the most humor and silliness; he said “If you’re going to tell a joke involving an animal, make it a duck.” The word “duck” may have become an inherently funny word in many languages possibly because ducks are seen as silly in their looks or behavior. Of the many ducks in fiction, many are cartoon characters like Donald Duck, who appeared in a Walt Disney film for the first time on 9 June 1934, and Daffy Duck, who appeared in Warner Brothers films. 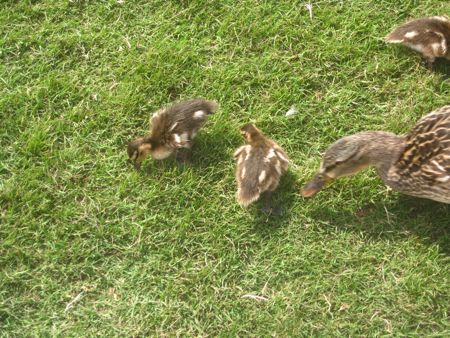 Sue has them all named already!

After a bit of happy hour, we headed to home to feed the babies and then off to the 405/605 Tea Party held at Leisure World.  We do the briefings and take photos of the activities.  Reverend Jesse Lee Petersen spoke this evening…  An amazing person!  Please join us!

Time for a Tea Party

Just an old retired guy trying to finish out my last years on this planet loving my best friend and wife, having fun, learning, and passing on helpful things to others.
View all posts by Paul →
This entry was posted in Food and Wine, Friends, Fun and tagged Dining Out, Friends, Golf, Old Ranch, Special Events, Tea Party. Bookmark the permalink.
Powered by Maribol IMDB Plugin