Sunday, TIme For A Visit!

Fact: It is a common myth that dogs can only see in black and white.  They only have two cones in their eyes to detect colors, whereas humans have three.  That means dogs see colors on a blue and yellow scale but cannot distinguish between red and green.  On the other hand, they have better night vision than humans.  Their eyes take in information 25% faster than us, making them incredibly talented at catching a ball or frisbee.

Scout, The Wonder Dog, got up and waned outside.  After watching him for a while, I decided we needed a father-son talk about his hairdo! 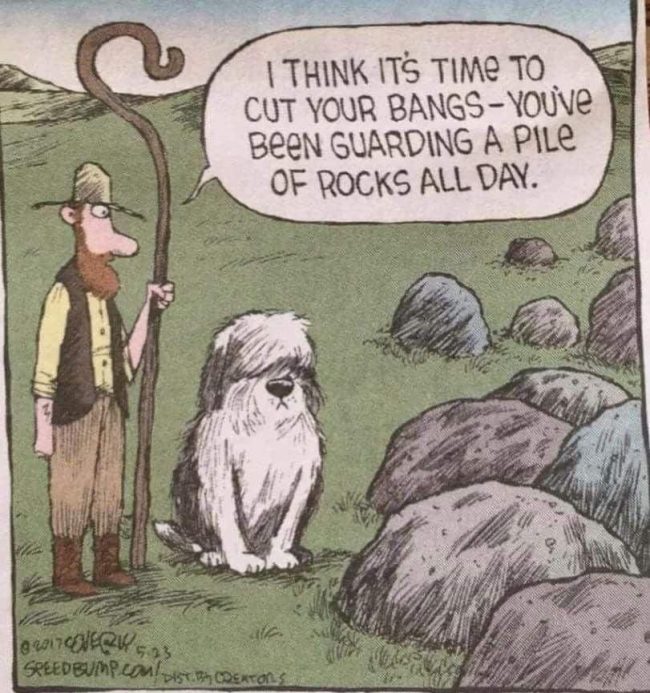 We have to do something about his hair!

Soon after that, Mary came into the kitchen, and we enjoyed a cup of coffee.  Yesterday was gardening day, but the sky was overcast, so I did not take pictures.  Today, we strolled around the pool with the camera in hand, looking at our handiwork.

The newest in our collection, the hibiscus, was looking winsome. 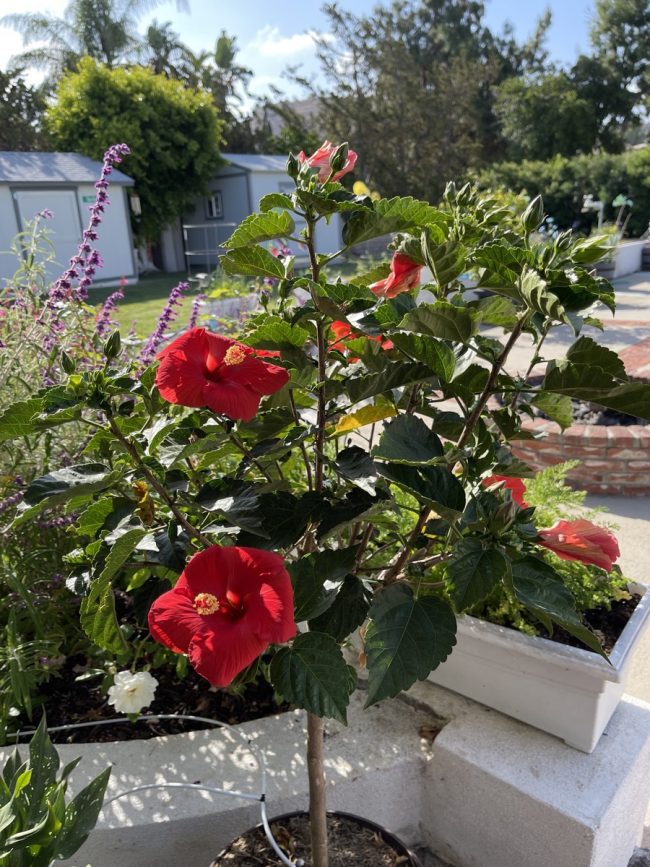 The flowers are lovely this time of year!

One of many flower beds surrounding the pool looked quite neat with its combination of flowers and vegetables! 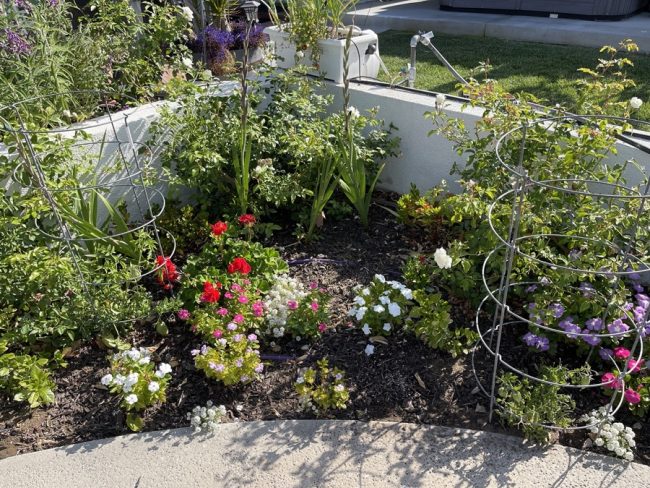 The results of our gardening activities Saturday were satisfactory.

The flowers were brilliant in the morning sun.  We found six more coming up in the backyard.  Next year we will have to try other colors.

I don’t buy flowers from monks. I like to do my bit to prevent florist friars. 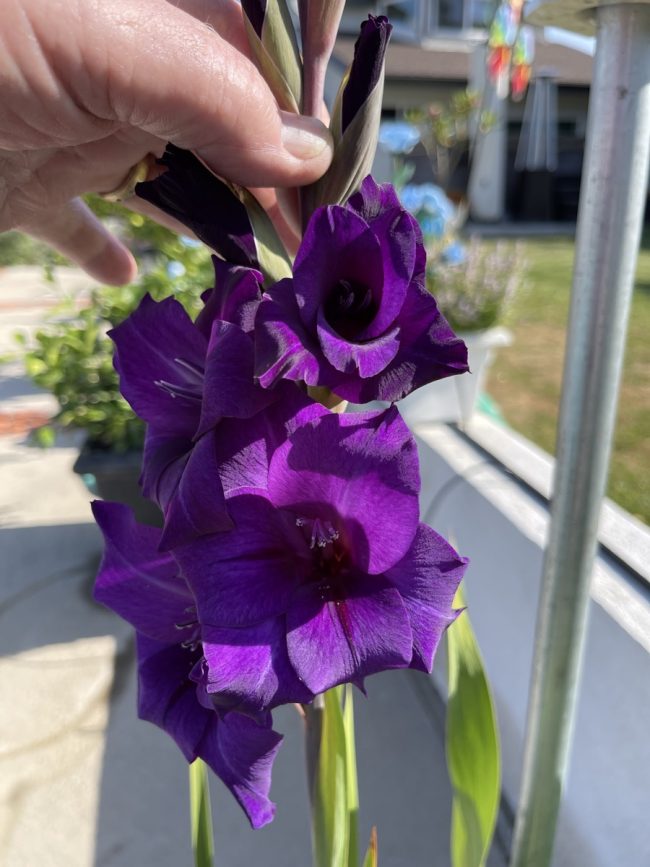 We have more growing in the yard!

Most of our flower boxes were converted to edible veggies.  The two carrot boxes were well mixed with sand, and we are getting plenty of carrots for our salads.

Cooking carrots are better for you than eating raw carrots.  As the most popular and widely grown member of the Apiaceae family, you want to respect the vegetable.  You should get the most out of each bite by cooking them.  Cooking releases the hidden pockets of good-for-you beta-carotene.  In fact, eating carrots raw only gives you three percent of this substance, but when you heat them up, they release closer to 40 percent.  So try these sweet vegetables puréed into soup, sliced thin onto a salad, braised in butter, baked, cooked until they are soft in a stew, and stuffed into poultry. 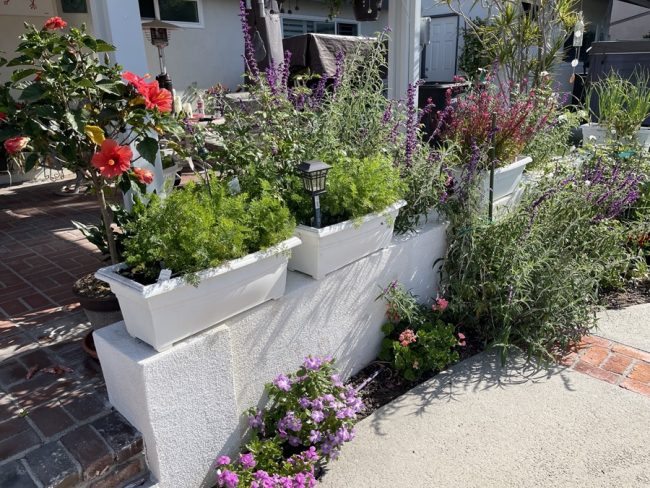 The boxes are loaded with carrots.

The tree below was a story.  I was given this when my dear mother passed away in 1990.  It was about nine inches tall, and I have kept it all these years.  With Mary’s assistance, we have made the plant grow broader and taller. 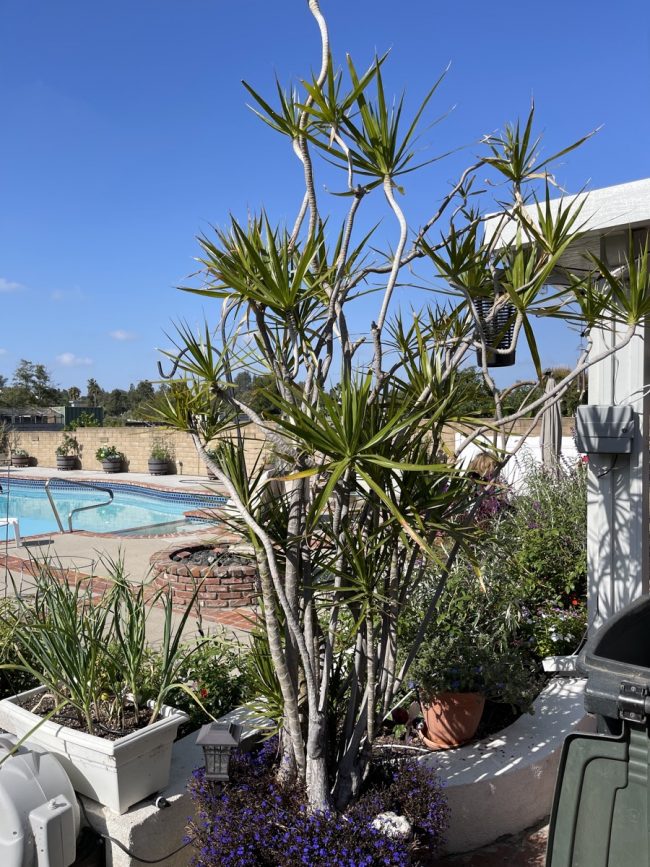 This tree is over thirty years old!

The walk around our backyard takes a while because we “talk” to the plants.  Mary whispers to them so the neighbors will not hear.

I did ask Mary, “What do you call a garden that is chicken-proof?”  Duh, “Impeccable.” 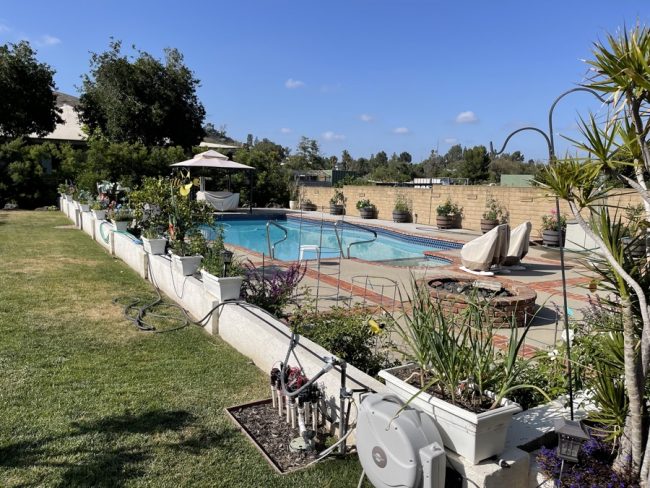 We love our yard.

We got ready to go to Roger’s Gardens by noon as we wanted to do some shopping, and we were having lunch with Becky and Dan, Mary’s daughter.  We took Jamboree from our place to Roger’s as it is a straight shot, and we avoided the freeways.

The first stop was the orchid room, as we were after African Violets.  While most indoor plants flourish for only two to five years, the African violet flower has serious staying power.  With the proper care, they can live up to 50 years!  The key is to avoid over-watering, chilly temperatures, and direct sunlight. 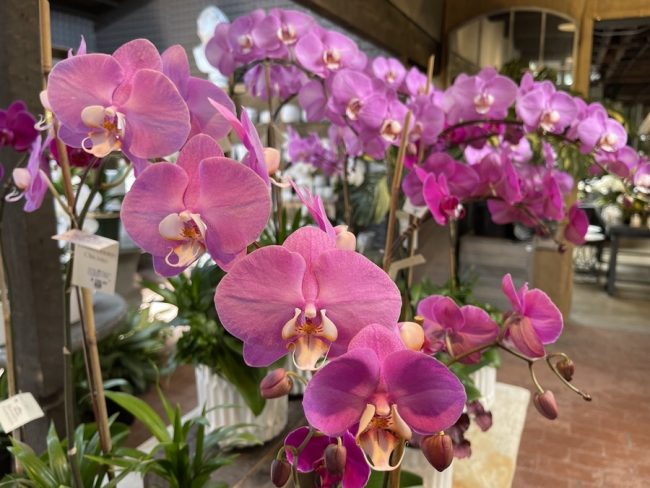 A visit to the orchid room at Roger’s Gardens

We bought two of these little guys to take to Annie next time we travel to Banning. 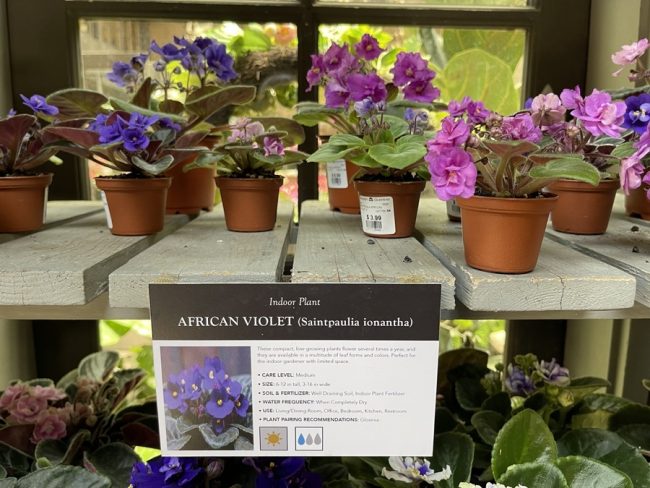 We have two babies to give to Annie.

We went to The Farmhouse for lunch.  We arrived a little early, so we had a glass of wine and examined the menu! 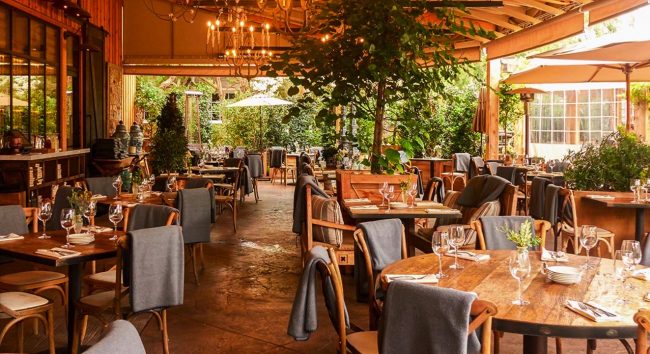 It was a perfect day to enjoy the meal and company!

They had specials today, and Mary did the egg dish that neither of us could pronounce, much less spell.   It looked sensational. 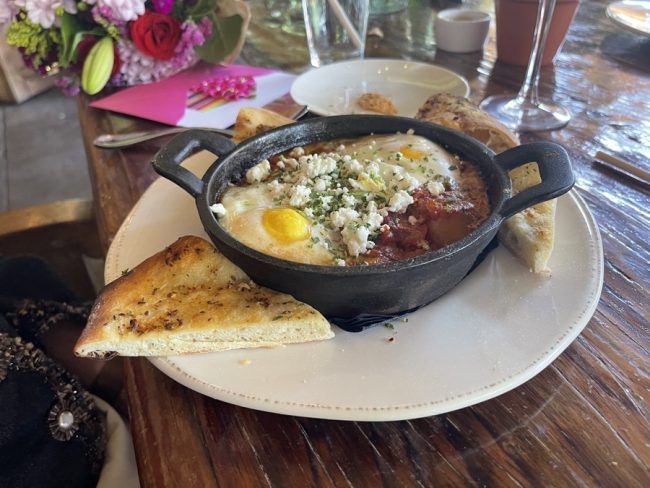 I opted for the enchilada, and it was fantastic.  It did NOT look like the enchiladas we get at the local Mexican restaurants; this one was fried and stuffed with chicken and covered with micro-greens. 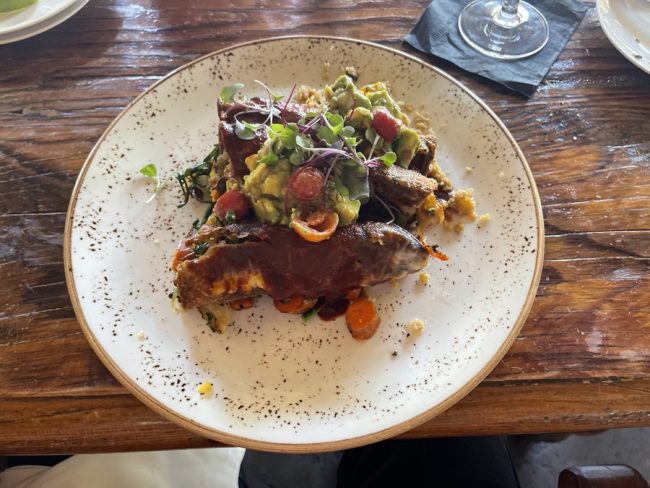 We had some things for Becky, so we drove them to their home about one and a half miles away.  It was an excellent visit, and we made plans to do it again! 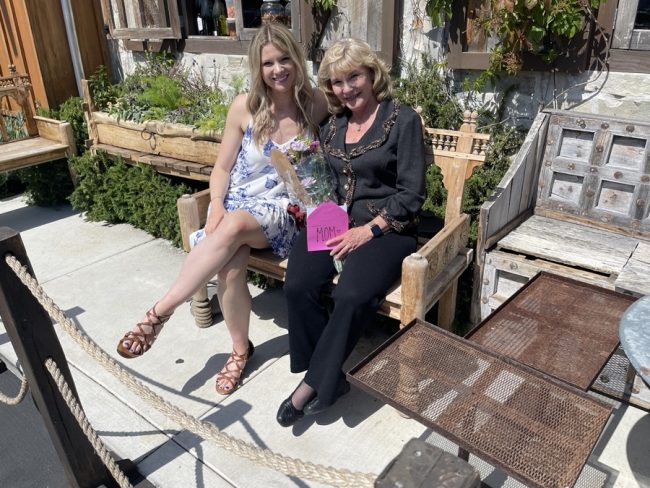 Becky and Dan go there quite often and they named a drink after Becky! 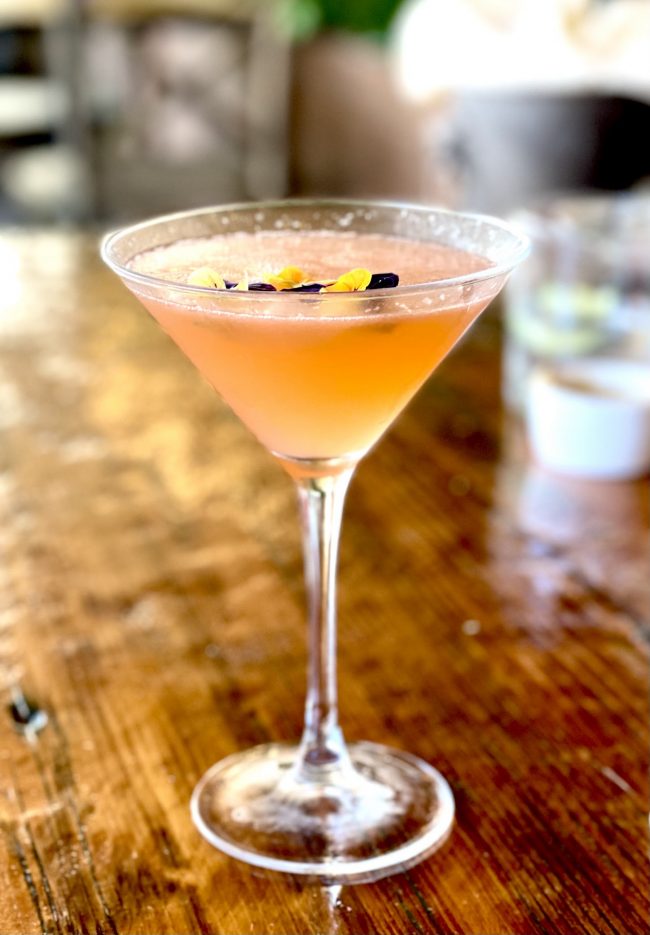 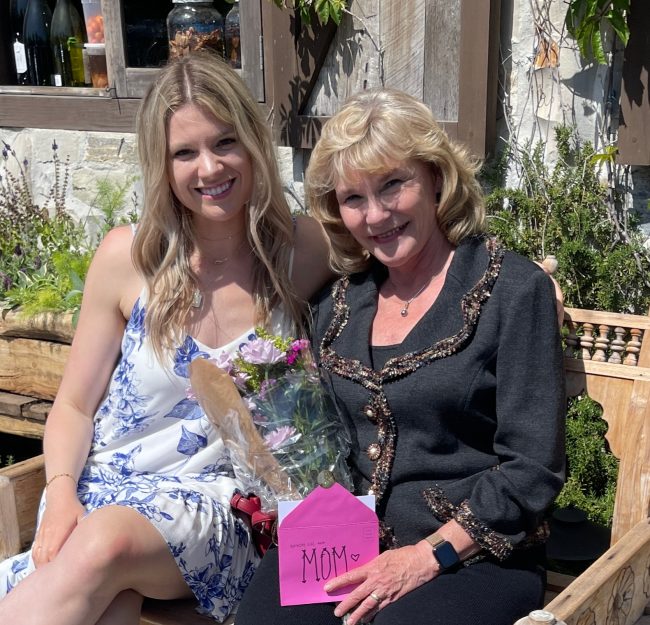 Returning home, I laid down for a twenty-minute nap, and after an hour, Mary decided to go to Jan’s alone.  I slept for two hours solid, which means I will not sleep well tonight.

We watched two Jesse Stone movies and finally went to sleep at 1:00 AM.  The first movie was “No Remorse.”  Police Chief Jesse Stone, having been suspended by the Paradise, Mass.  Town Council begins moonlighting for his friend, State Homicide Commander Healy, by investigating a series of murders in Boston, leaving Rose and Suitcase to handle a crime spree in Paradise on their own.  Convinced the Boston murders have a connection to the notorious crime boss, Gino Fish, Jesse pours his energy into his work in an effort to push away the professional and personal insecurities he’s avoiding at home in Paradise.

We then watched “Innocents Lost.”   Jesse tries to prove the innocents of a man he feels is wrongly accused of murder while also obsessing over the death of a young girl in town.

Just an old retired guy trying to finish out my last years on this planet. I lost my best friend and wife in early 2020. I was blessed again by reconnecting with Dr. Mary Côté, a long-time friend. Mary and I got married July 28th, 2021, and are enjoying life together and plan to spend the rest of our lives being a blessing to our friends and family.
View all posts by Paul →
This entry was posted in Dancing, Dining Out, Family. Bookmark the permalink.