Fact: Most elephants weigh less than the tongue of a blue whale!

Scout and I went for a short walk, and we met a neighbor.  I had to explain Scouts’ desire only to chase breadsticks! 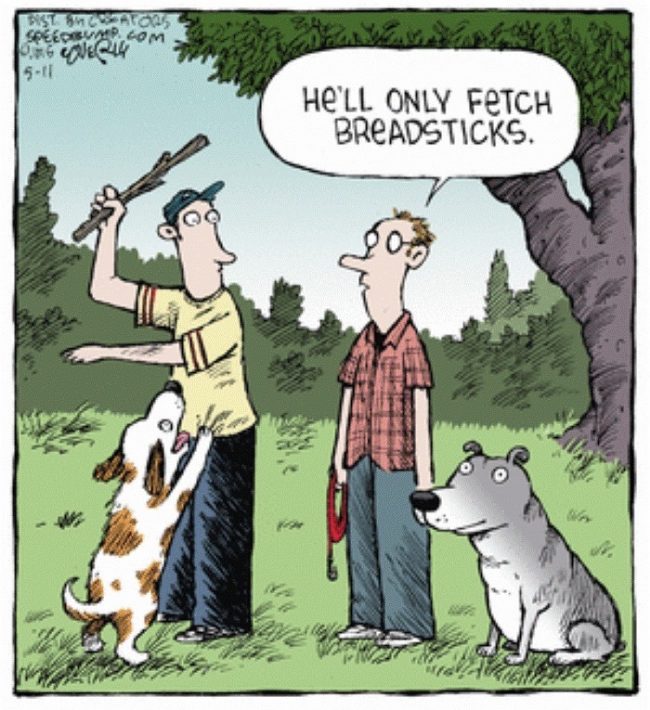 We had to get ready to exit Casa Valencia early as we needed to be in Los Alamitos at 11:00 AM to meet with Dr. Rucker, my generalist.  He read the results from the blood test, and it was perfect for an older man.  My cholesterol was 56!  Everything else was pretty nominal.

We planned to go to lunch with Robin, but she stayed home today.  On the way out, Dr. Vannatta called and canceled; we will see him Wednesday.  We were supposed to see Dr. Vannatta at 2:30 PM so he could read the Nuclear Stress Test results.

So, we stopped by Staples, got an ink cartridge for the 8600, and then steered home from 22 to 55.  I watered the new trees in the front yard, and Mary headed to the kitchen to make brunch.  She worked on the salads for quite a while; now we know why! 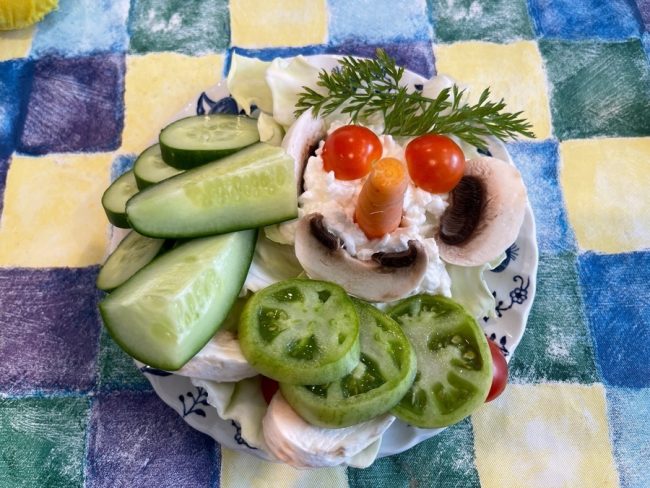 Brunch time, and Mary gets creative.

Everything in the salad was from our garden.  Brunch without booze is just a sad, late breakfast.

What is the chef’s favorite music to play in the kitchen?  Wok n’ roll. 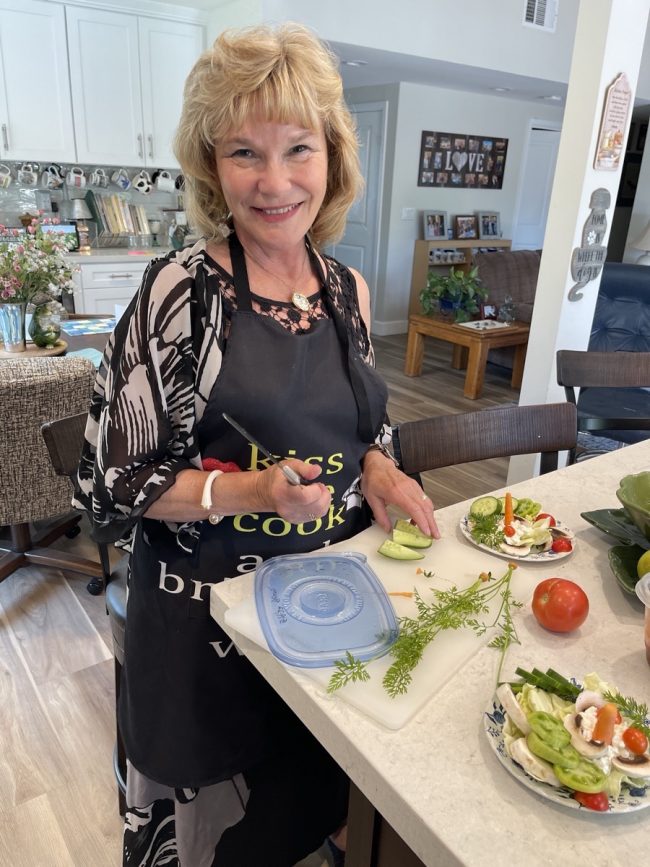 Our lack of a formal veggie garden this year did not stop us from planting veggies in the flower beds.  The one behind Mary is enormous, and it has hundreds of blossoms on it. 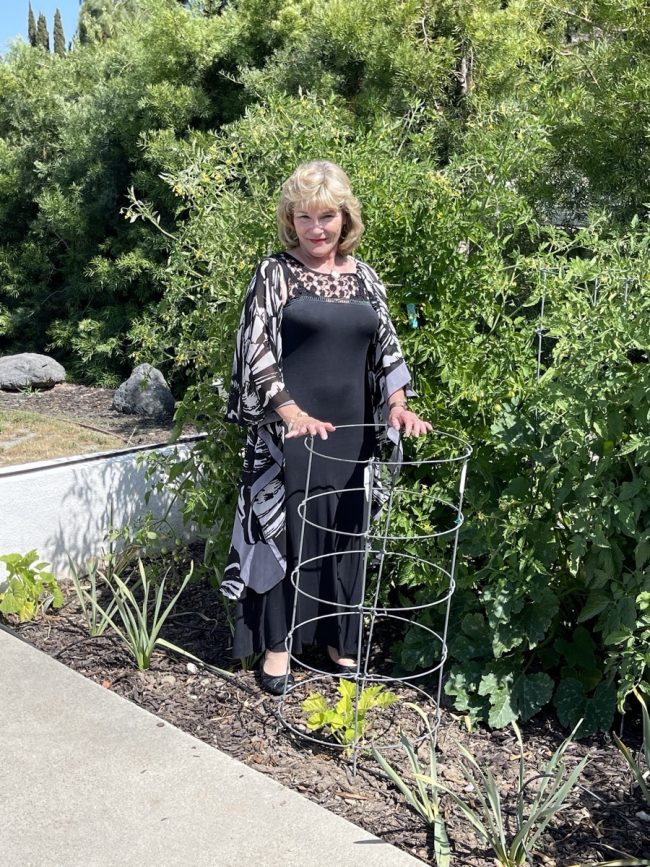 Our tomatoes have gone nuts!

We are not kidding; they are taller than Mary, so we will need a step ladder when they get ripe. 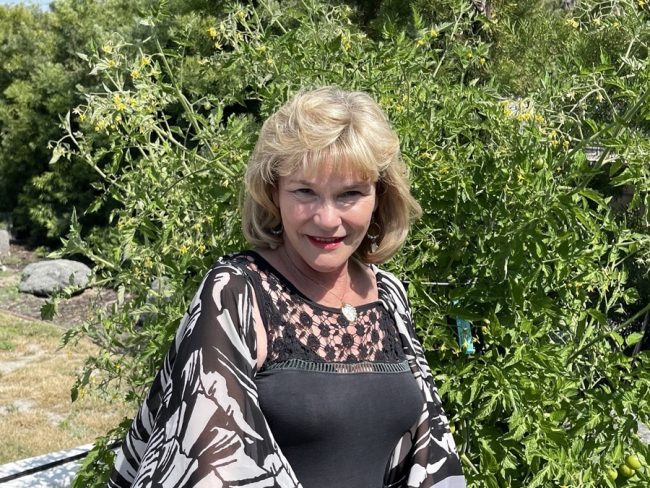 Vanna White, eat your heart out! 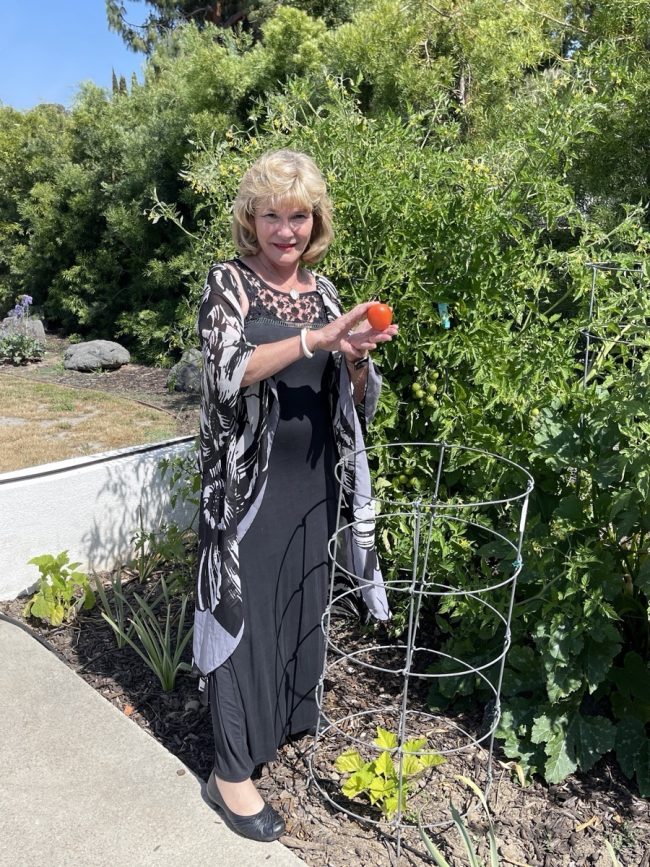 They are taller than her!

Mary took me to the cucumbers, and they were going great.  Some of them were in our brunch today, and we have to pick them every other day to keep the plant producing. 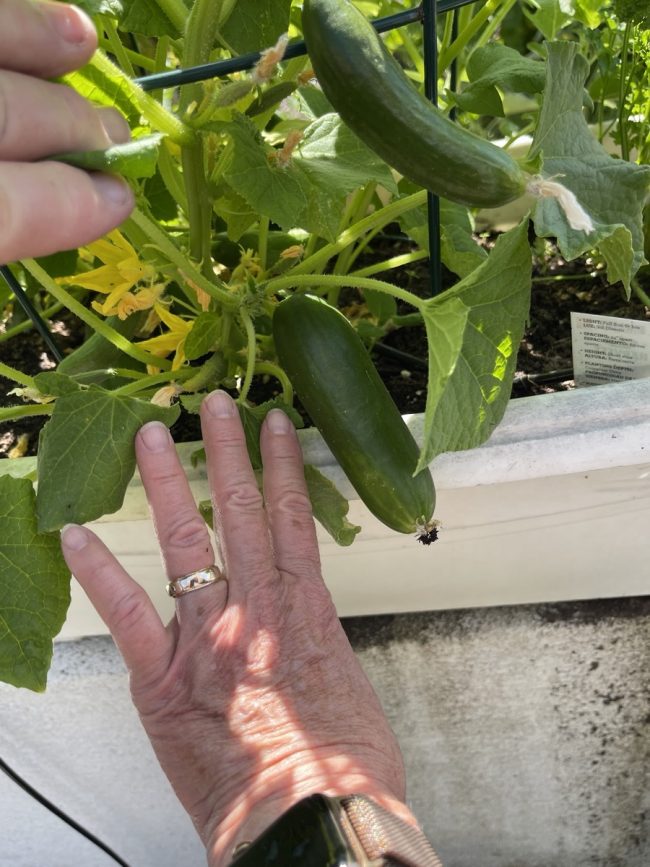 We get cucumbers every day!

We worked around the house for a while, and then Mary decided beans needed to be made.  This is her famous eighteen-bean concoction, and I worked with her and chopped the ingredients up. 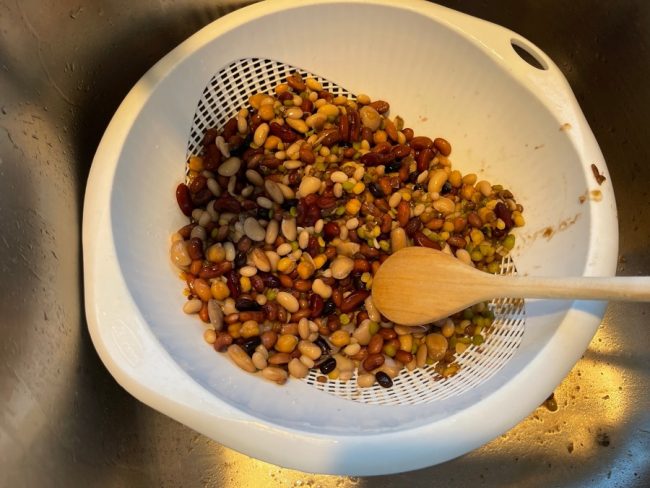 We watched the Jesse Stone movie from last night again as we both missed some parts.  Then we watched a new one called “Lost In Paradise.”  Jesse’s investigation into the Boston Ripper gets complicated in “Jesse Stone: Lost in Paradise”

We then decided to make Egg Bites, a recipe from Allreceipes.com, and it looks like the ones served in Starbucks.  We made two dozen of them, and we polished off four before going to bed.  We were not worried since they are only 100 calories in each one.

Last week, we went to a new restaurant, and it was named ‘Out of This World?’ Because it specializes in Unidentified Frying Objects. 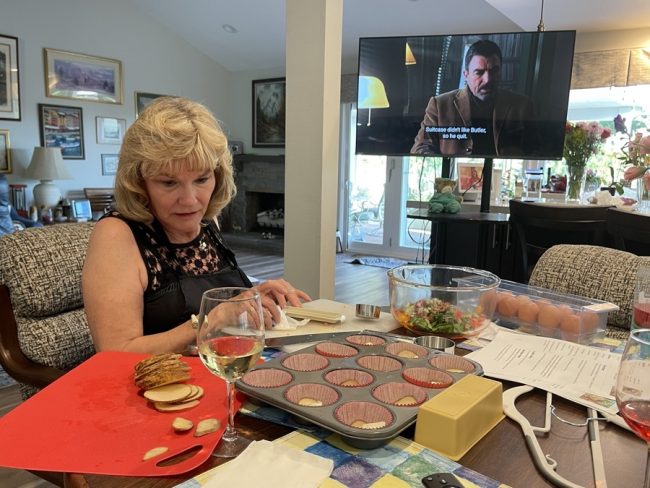 Then we watched the last of the Jessee Stone series entitled Lost In Paradise.  With things running smoothly in Paradise, Police Chief Stone (Tom Selleck) agrees to serve as a consultant on an unsolved murder case in Boston.  Local police suspect “The Boston Ripper,” a killer who is already behind bars, but Stone believes the murderer is a bit closer to home – setting him off on an investigation filled with surprises and grave danger.

Just an old retired guy trying to finish out my last years on this planet. I lost my best friend and wife in early 2020. I was blessed again by reconnecting with Dr. Mary Côté, a long-time friend. Mary and I got married July 28th, 2021, and are enjoying life together and plan to spend the rest of our lives being a blessing to our friends and family.
View all posts by Paul →
This entry was posted in Uncategorized. Bookmark the permalink.