Fact: Nothing is really lost until your mom can’t find it.

The day was gloriously chilly with a bit of wind, but we knew that all would be normal by afternoon.  The pool was steaming, and when Mary and I went to inspect yesterday’s plantings, the temperature was 86 degrees.

Today we got ready to go to the Santa Ana Elks to celebrate with family and friends.  This is Mary and my second Mother’s Day, and Mary was excited.  We departed for the Elks at about 9:40 AM since it is a short distance away.  Scout stopped Mommy and questioned her about her outfit! Scout, The Wonder Dog, does have his opinions!

We departed as soon as Mary changed clothes to an “Approved By Scout” version!

We arrived right on time and were greeted with champaign.

Happy Mother’s Day! Yes, it’s today. How fast can you glue macaroni into a bracelet? 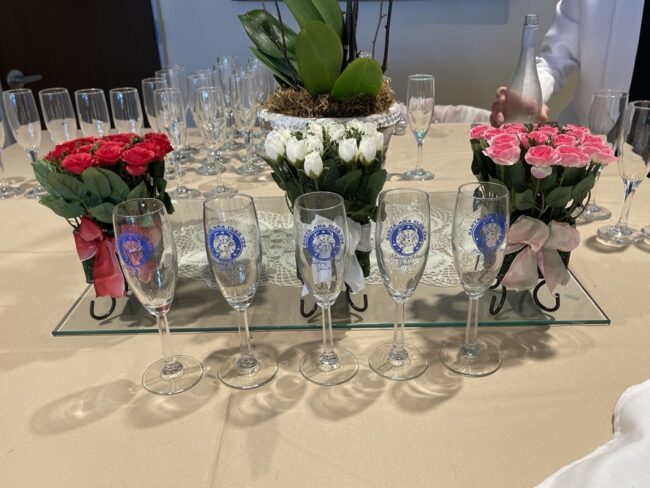 Welcome To The Elks!

We plan to have 24 people show up today, but unfortunately, Zack and  Becca had to cancel at the last minute. So we have plenty of food at our table. 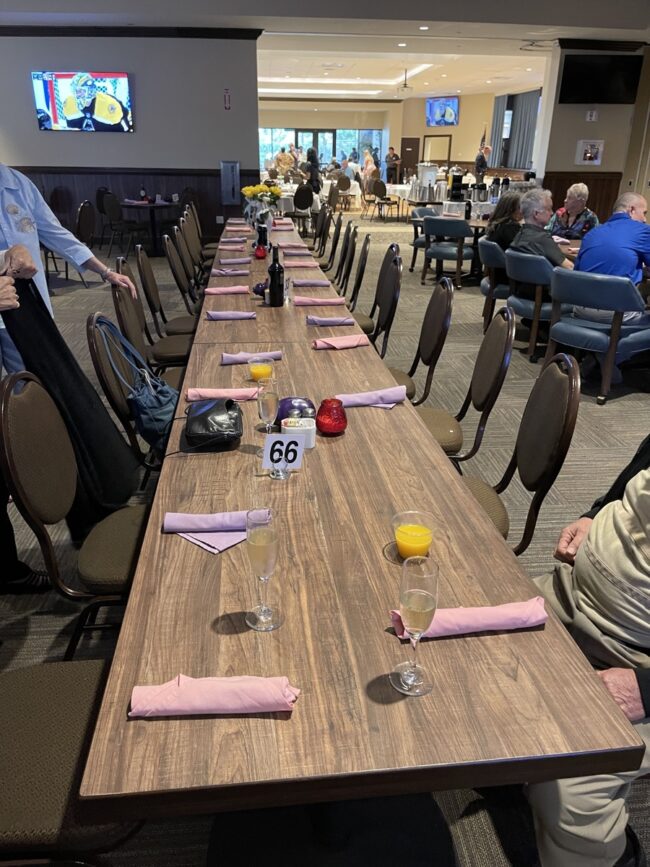 They set our table as soon as we got there!

We even had a chance to get a picture of ourselves, an event that doesn’t happen very often because we are usually the picture takers.

Mary told the kids on Mother’s Day she wanted to be pampered – so they bought her some diapers. 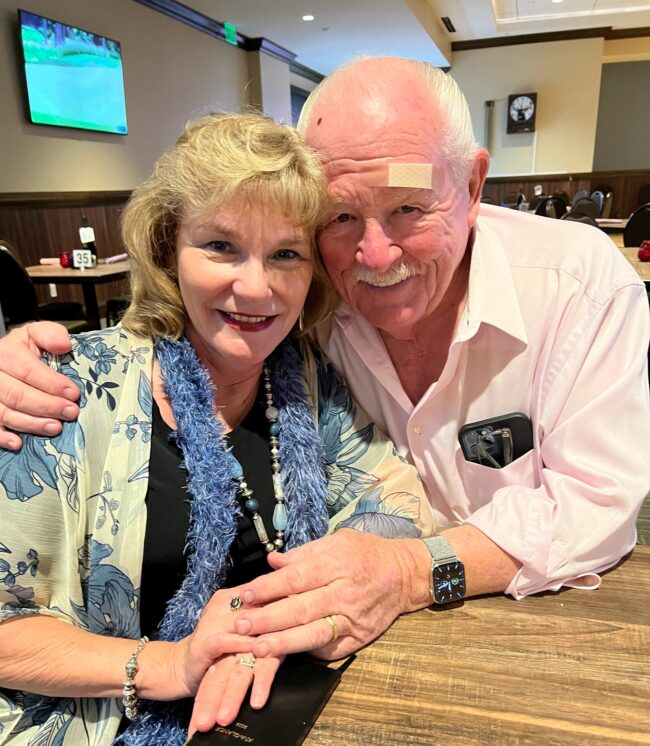 Mary whispered, “It’s not easy being a mother. If it were easy, fathers would do it.”

David joined the fun today, and we were pleasantly surprised! 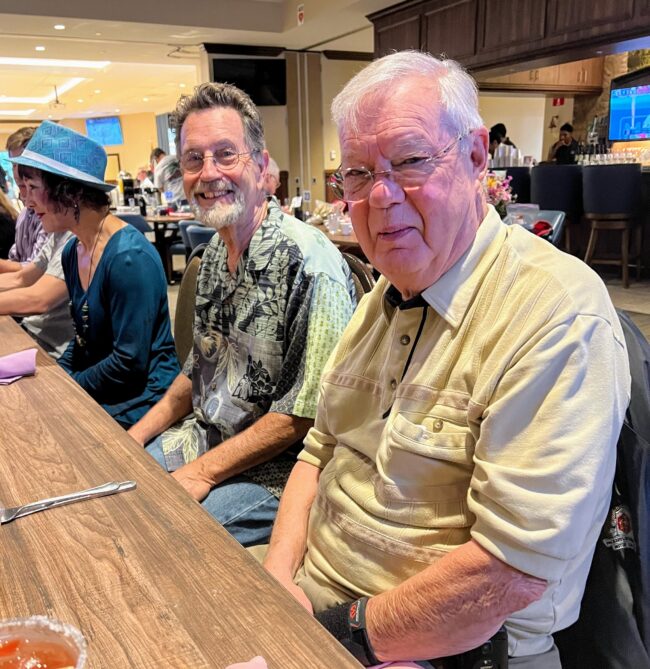 David was up and dressed before 10 AM; it was magic!

There was more food than you can shake a stick at, and I was a good boy today and only went to the line one time. Some of the guys went through twice, and with the grandsons, we lost count. 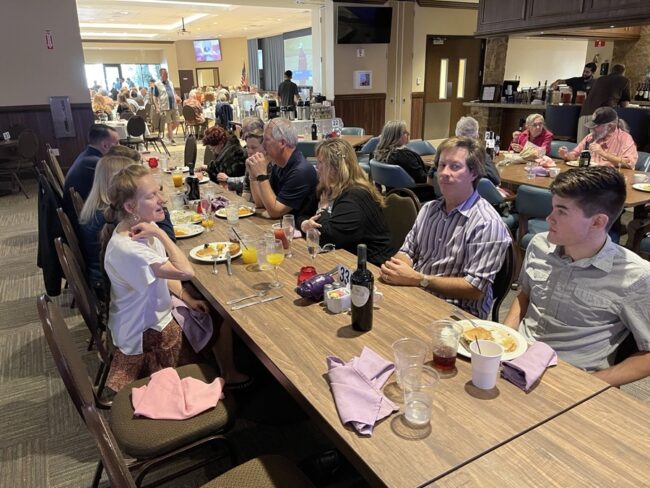 We love the kids enjoying each other.

Charlie and Joel made it to the lines at least twice, and in fact, about three hours later, when Joe was at our home, we offered him something to eat, and he made the sign of the cross, saying he was absolutely stuffed.

If evolution really works, how come mothers only have two hands? 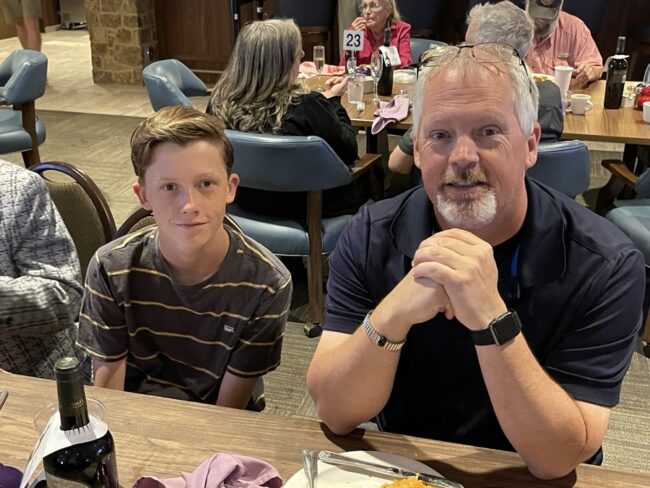 Mary is in her usual sitting position at girls’ night out, holding court over the gaggle of people, and has a perfect view of who is behaving and who is not. 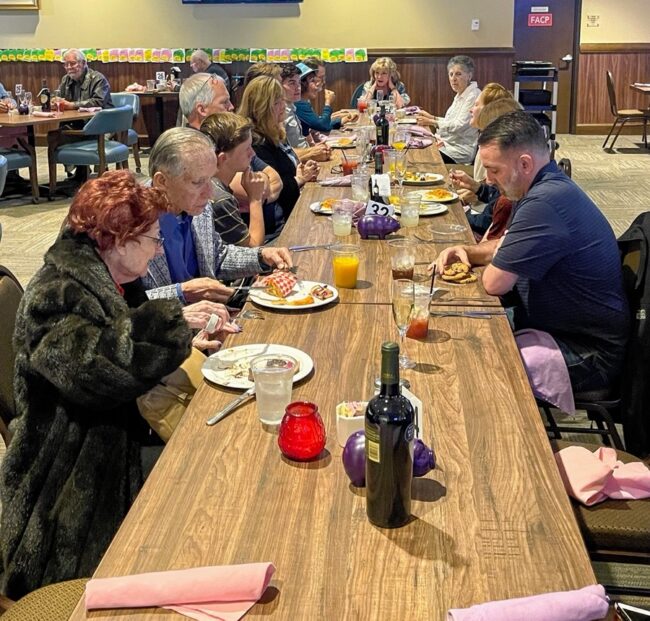 Amy and Alex had a good time, and you can tell Alex is wearing his braces because he won’t smile.

I did hear Amy say, “Over the years, I learned that motherhood is much like an austere religious order, the joining of which obligates one to relinquish all claims to personal possessions.” 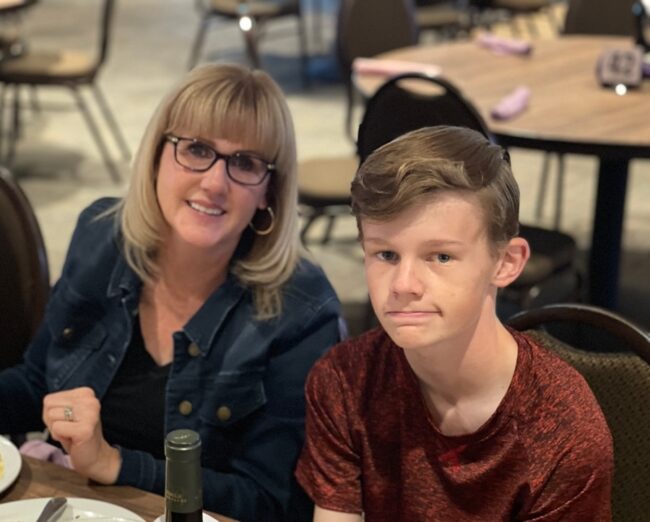 Here are three of our ten mommies this morning; Michele, Robin, and Amy.  I did hear the girls say to each other, “Mothers with teenagers know why animals eat their young.” 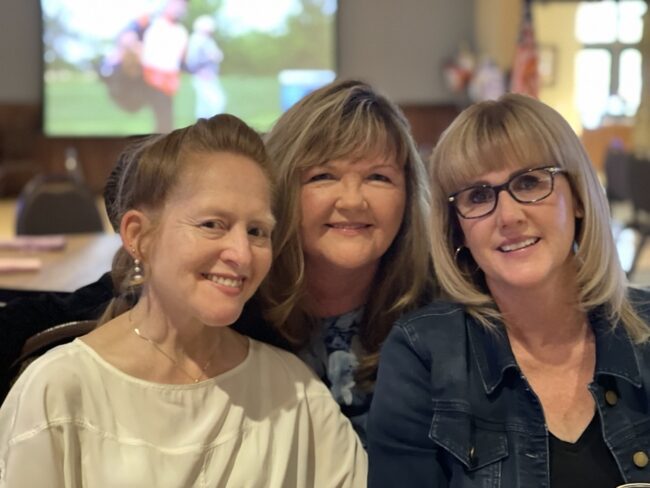 Watch out for these two because you don’t know what will happen when they get together. 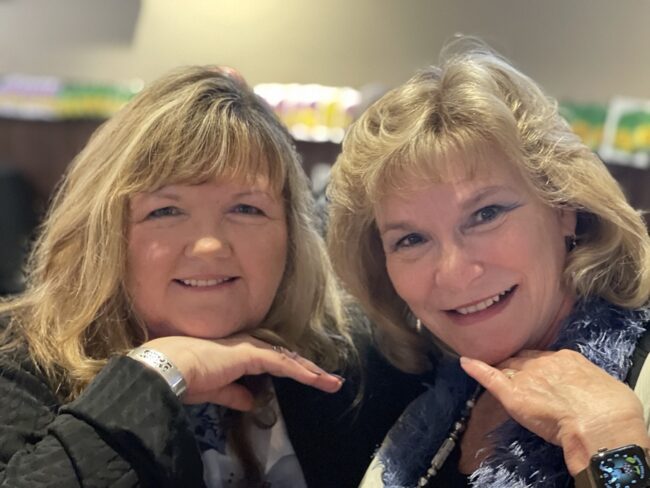 The Elks decided not to take apart our table and told us we could stay as long as we wanted to, so the boys headed over to the Green Room with a head billiards and other games set up. I was pretty proud of them because, on the way out, I talked to one of the executives running the Elks and mentioned there were four young boys in their game room. He said, “I know. I checked on them, and they are very well behaved”. Of course, I told him that the four young men were all my grandson. 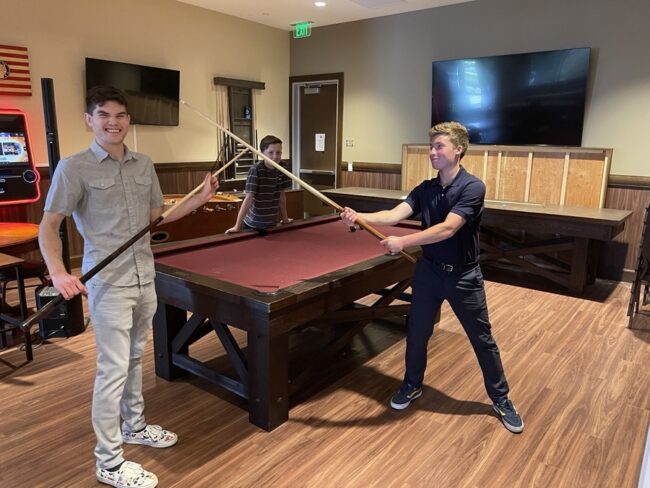 The grandsons went to play billiards!

After we departed the Elks, at roughly about 1 o’clock, Joe and Family headed to our house because I had the pool heated to 85°, and the boys went swimming. 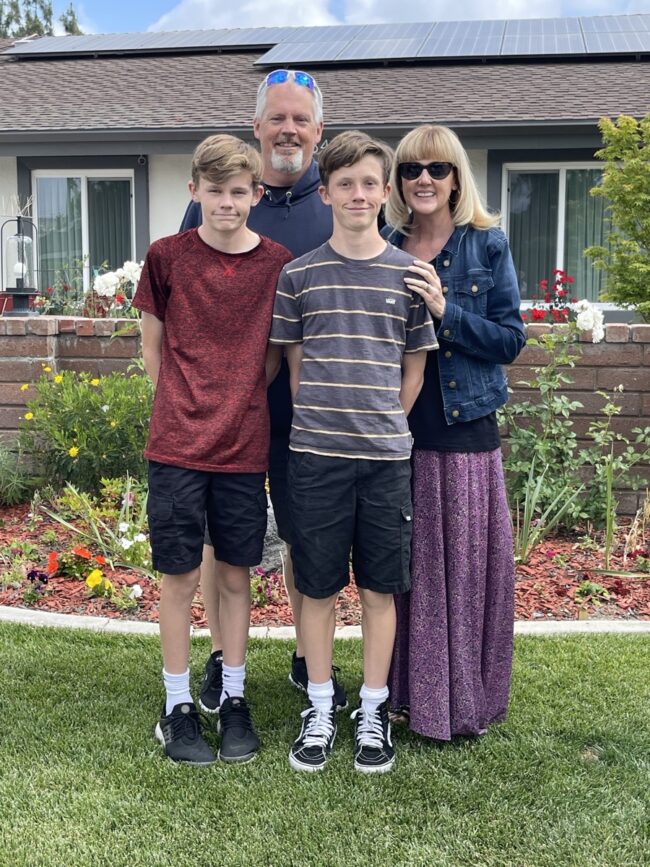 The Liles family after swimming.

After swimming in the big pool, they decided to gravitate up to the swim spa, which was 95°. The afternoon was fantastic, probably 70 or 72°, so moving into the swim spa was good. 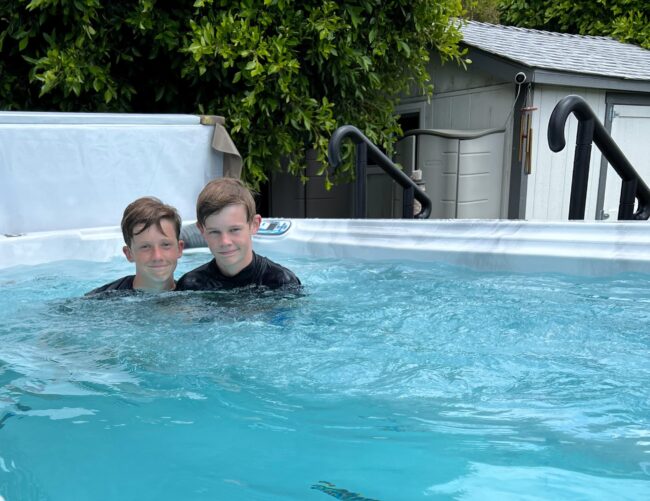 Ten more minutes, and they will be hard-boiled!

We talked to Colleen for a while.  She had some excellent advice, “I want my children to have everything I couldn’t afford. Then I want to move in with them.” 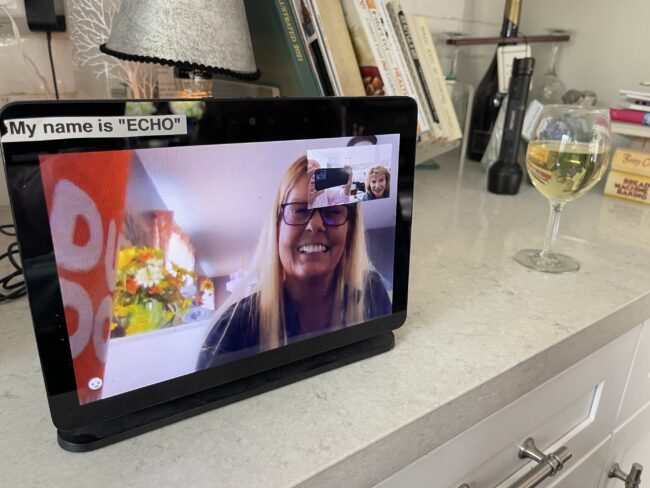 We visited Jan and her family for a few minutes before returning home.  We were dead tired.