How do vampires get around on Halloween? On blood vessels.

You know you must clean your house before the house cleaners come! 6:00 AM, and I am up and going!  I got caught up with the Daily Diary and progressed into the kitchen to straighten it up before the cleaners joined us today! 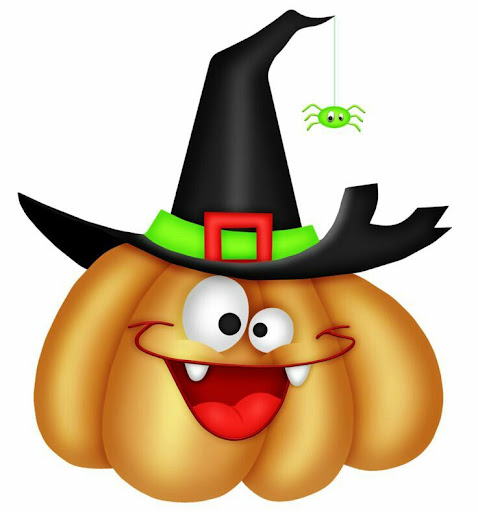 We are getting ready for Halloween!

We all split this morning, with Colleen visiting her Mom and taking her out to lunch.  I had to go to the Laser Care Skin Doctor to assess the latest cancer spot, which needed to be removed.  The doctor is in Long Beach, and I like him, so I will drive the twenty miles to stay with him.  That left Mary to watch the rain gutters be put on the house and do more decorating! 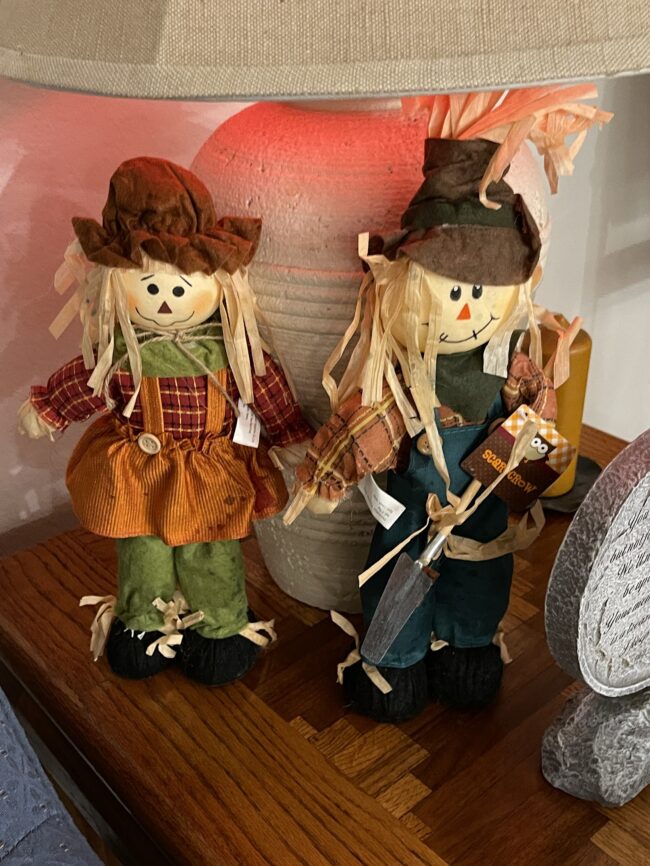 The Gutter Guys showed up at 9:55 AM, just before I departed, so I went over everything with them, which made it easier for Mary.

We all met back at the ranch about 1:00 PM when I met with the insulation contractor.  I am looking to have the entire attic re-insulated and drop the old R-13 in favor of the newest R38 batting; after all, Winter is on its way.

At 5:00 PM, the three of us were on the road again going to the Santa Ana Elks, where Colleen is being interviewed for membership into the Elks! While that was going on, Mary and I had an appetizer and a drink.  By the time Colleen was done, we had decided to dine at the Elks before walking Balboa Island and seeing the Halloween decorations! Our house cleaners showed up while I was taking a well-deserved snooze. 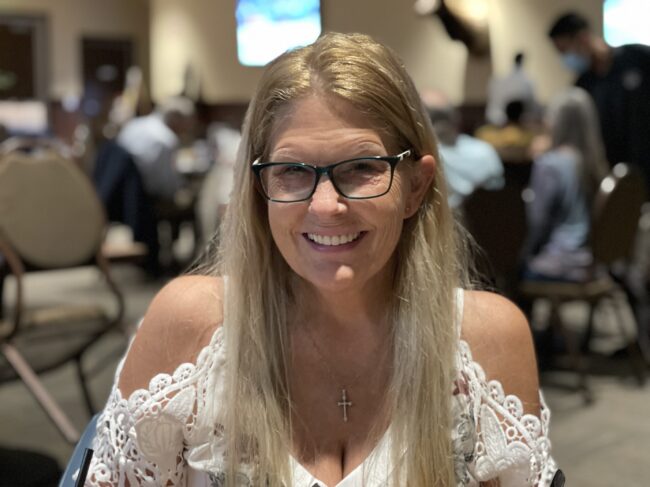 Dinner time at the Elks!

Mary tried the beef stroganoff while I did the chicken skewers.  We shared, and that was good! Mary, BTW, makes the best stroganoff ever! That way, we both get to have two items and learn what we like and dislike. 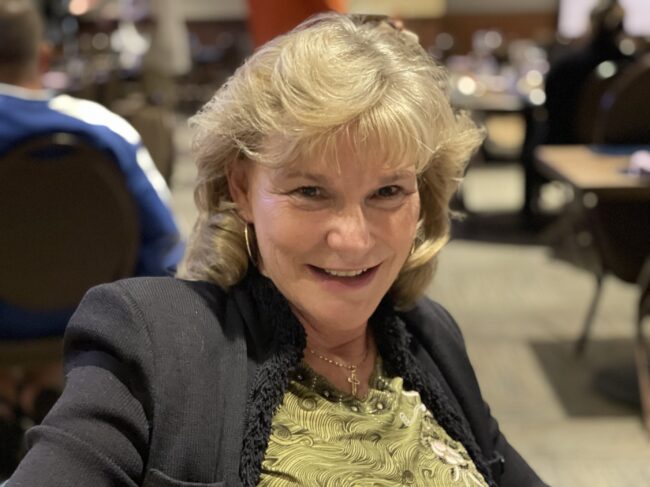 The lodge was busy this evening!

Colleen was interviewed in the big room, so we went into the lounge and hung out, deciding what to do next.  HAving Colleen with us is fun, so we want to pack everything in as soon as possible. 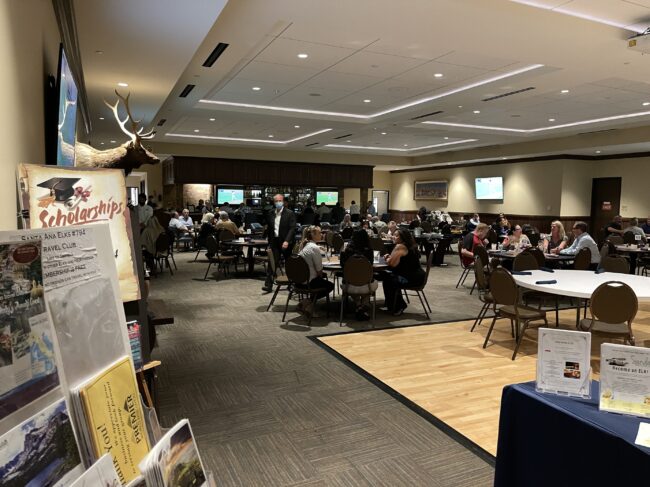 The lodge was busy this evening!

Dinner was done, and we headed to Newport and Balboa Island for a self-guided walking tour of the island decorations. We took the ferry to the island to see the sunset and enjoy the sea air. 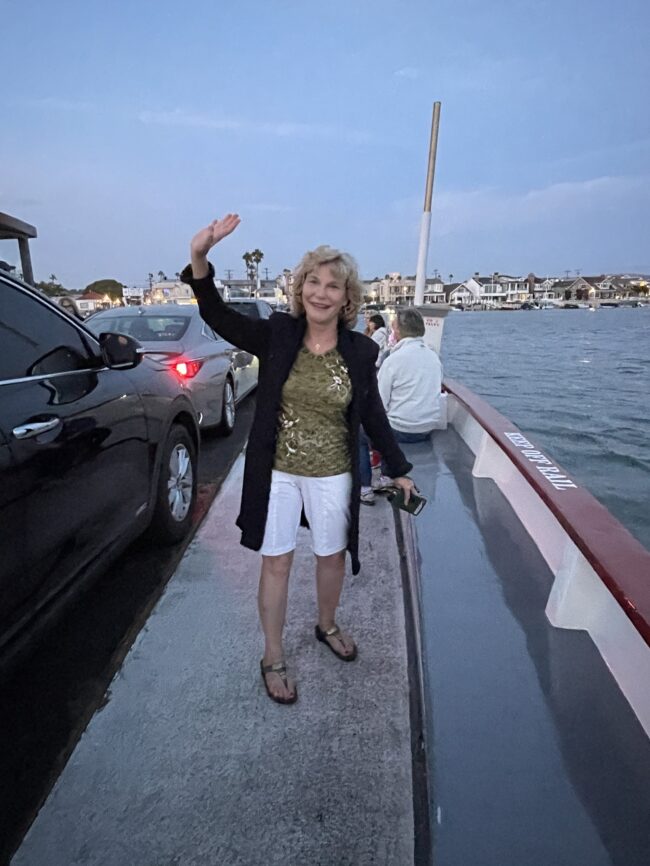 We took the Balboa Ferry to the island!

Did You Know? In 1919 Joseph Allan Beek obtained the rights from the city of Newport Beach to provide a ferry service across the Newport Harbor between Balboa Island and the Balboa Peninsula. Before starting the ferry service, Beek owned The Ark. The Ark consisted of a giant rowboat with a small engine which Beek used as his first ferry vessel. The Ark carried oars in the event of engine failure. There was no regularly scheduled service, and customers telephoned Beek when they needed a ride across the harbor.

In 1919 Beek charged 5 cents per person. Three years after commencing operation, Beek built the Fat Ferry. This vessel held 20 passengers. Beek later built a small one-car barge which the Fat Ferry pushed across in front of it.

In the 1950s, Beek built three double-ended wooden boats for his ferry service: the Admiral, the Commodore, and the Captain. These three boats remain in service and have transported over two million persons. Each ferry holds three cars and 75 people. As of 2021, the Beek family charges $1.25 per adult, $2.25 per vehicle, $.50 for children ages 5–11, $1.50 for adults on bikes, $.75 for children on bikes, and $1.75 for motorcycles. Children under the age of 5 are free.

The ferry boats need constant maintenance, but this does not usually interrupt service. For two weeks in 2008, the ferry service shut down for an extended period, for the first time in 50 years, to rebuild the automobile ramp leading to the boats.

Currently, Beek’s three sons run the business, which has been in the family for nearly 100 years.

The sunset was fabulous! We hit the harbor at a perfect time. 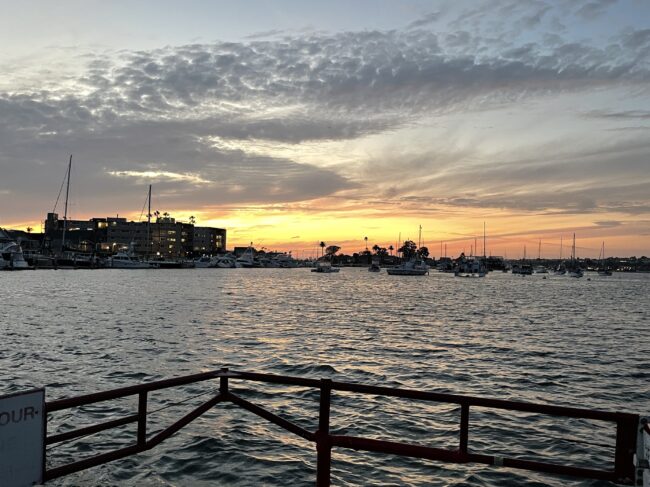 The Pavillion was lit up and active.  Today was a far cry from the 1920s when it served as a dance hall for most southern California! 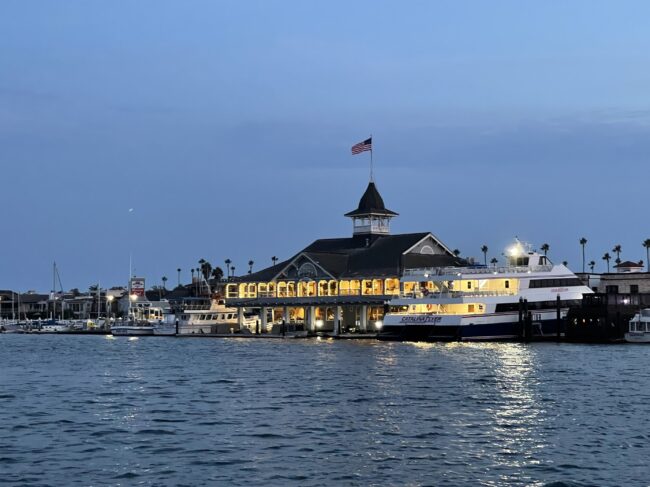 The beautiful Balboa Pavillion dance hall of the 1920s is still an imposing structure.

Colleen snapped a shot of us, and of course, the air was blowing, and hair was flying!  Mary and I usually do not have horns! 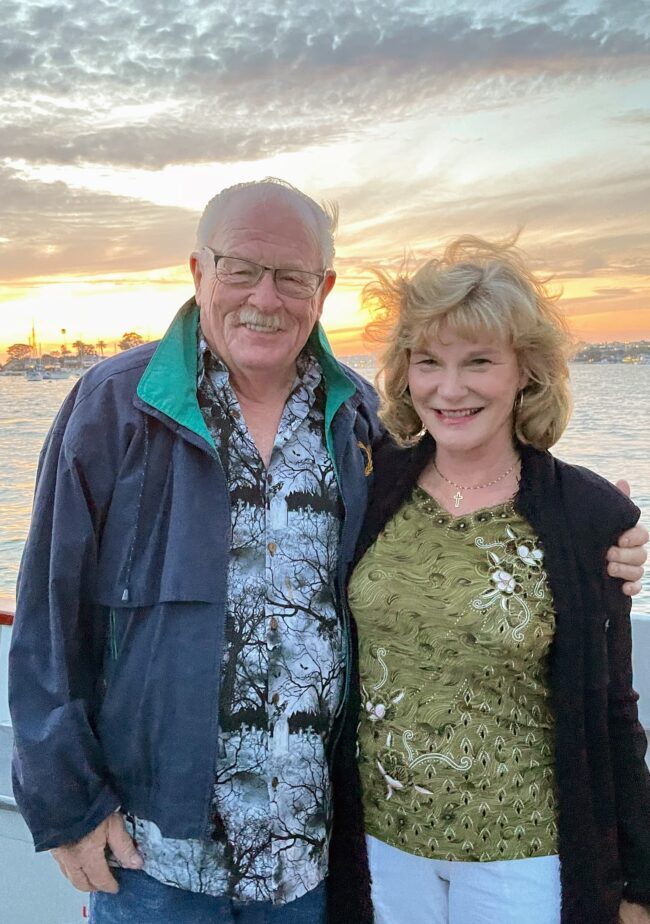 We are enjoying the ride!

Colleen and I got our picture taken by Miss Mary! 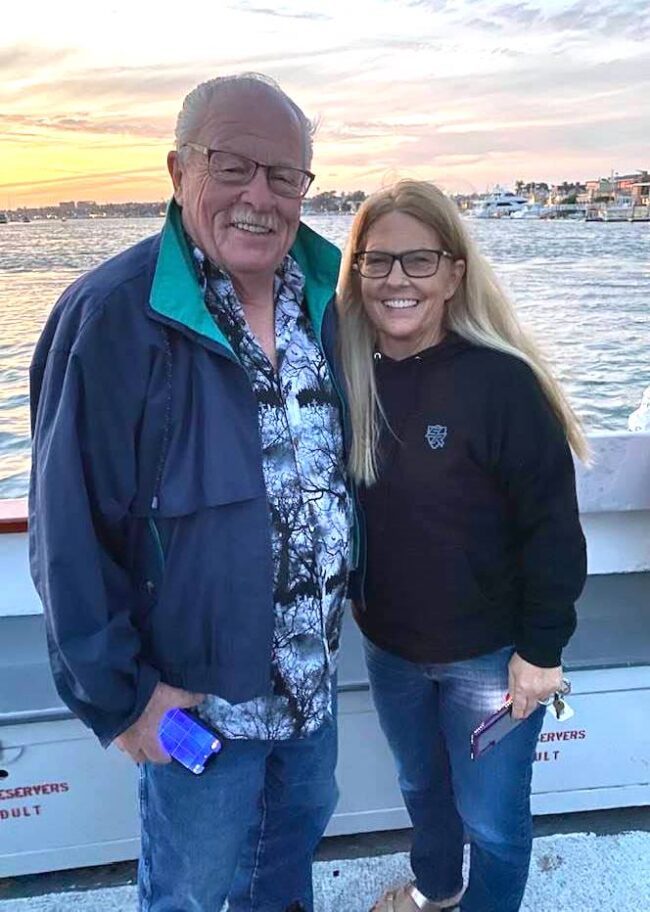 To the West, the ocean was on fire, and you could almost hear the hiss as the sun sets into the water! 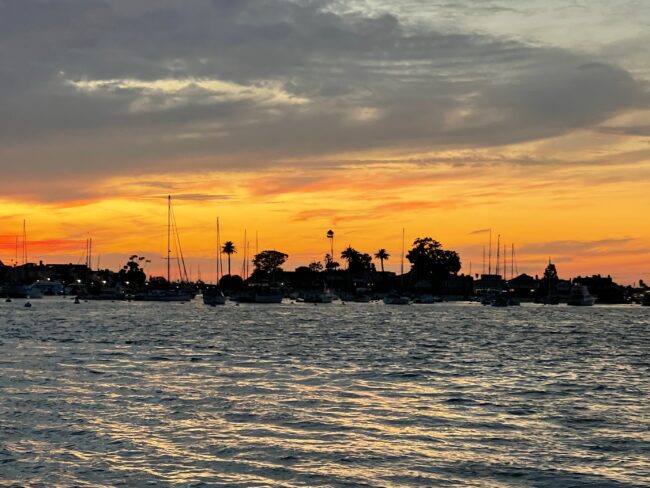 The sunset was amazing.

We made it to the island and began our mile-long plus walk; it was disappointing based upon previous years, but we may be just too early; we will try again in a few weeks! 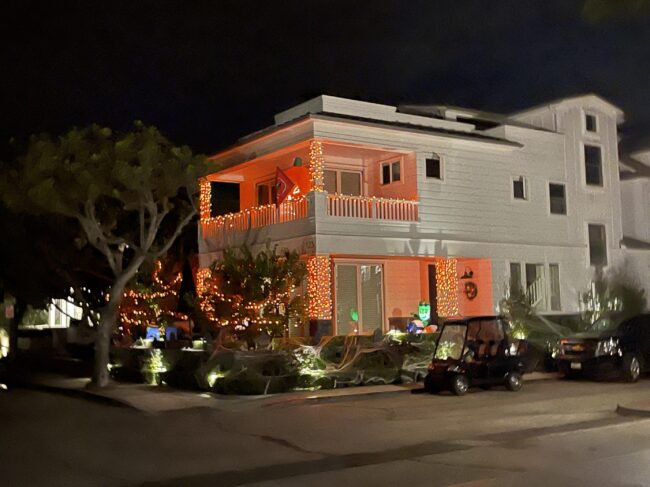 We were too early, OR COVID did in the decorating this year?

We stopped the walk early and returned to the car via the main street that crossed the island.  Ciao was open, so we decided to have a glass of wine, and we could not ever pass up dessert!  Mary and Colleen got the giggles, and they were infecting me!  We had a great time! 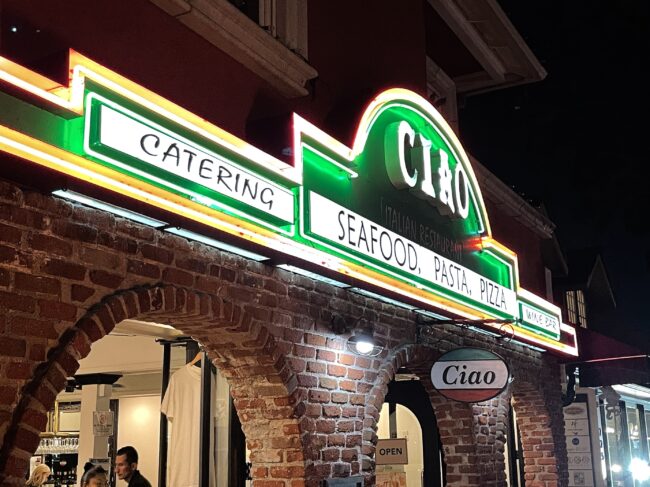 We stopped and had some wine and dessert before returning home.

We were home by 9:30 PM just in time to attempt to watch a movie for Halloween. Hocus Pocus was on for a while, and then either it went off, OR we fell asleep; we will never know! We took the side streets home, avoiding the freeways.

We are done for the day; say goodnight Gracie!

Just an old retired guy trying to finish out my last years on this planet. I lost my best friend and wife in early 2020. I was blessed again by reconnecting with Dr. Mary Côté, a long-time friend. Mary and I got married July 28th, 2021, and are enjoying life together and plan to spend the rest of our lives being a blessing to our friends and family.
View all posts by Paul →
This entry was posted in Dining Out, Doctor, Family, Working Around House. Bookmark the permalink.