We Are Out And About And Then OUT!

Before you criticize someone, walk a mile in their shoes. That way, when you do criticize them, you’re a mile away, and you have their shoes.

Sunday morning, and we are off like a rocket at 7:15 AM, heading to Los Breisis Restaurant in Laguna.  It was a breakfast for the members of the International Packard Club. We picked up Dianne at 7:30 AM and headed to the restaurant.  We got there and had perfect parking and a perfect seat right on the window. 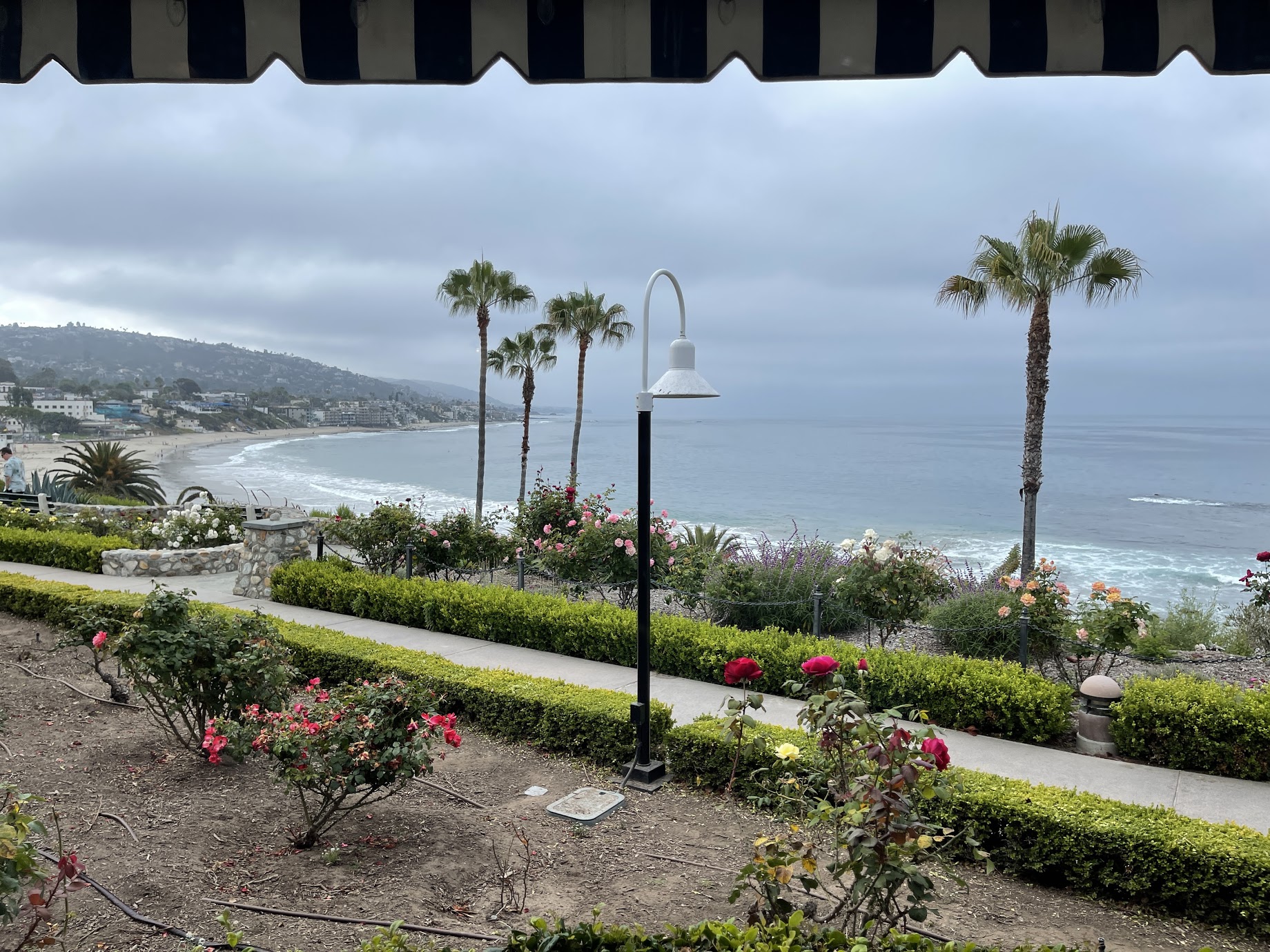 There was a little overcast in the beginning, and then the sun came out.

I told Dianne that I like my BM’s spicy, and she said she also did. Well, we ordered with Mary having a plain tomato juice and Dianne and I ordering hot! 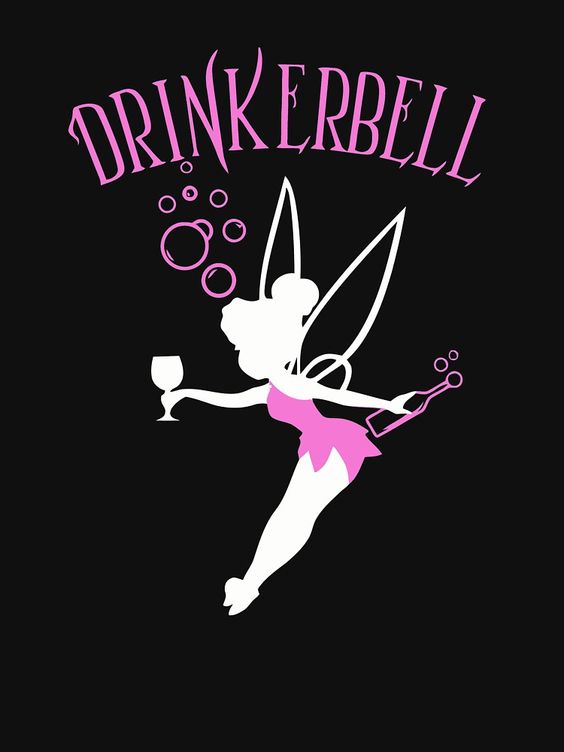 I have a new nickname for Dianne! 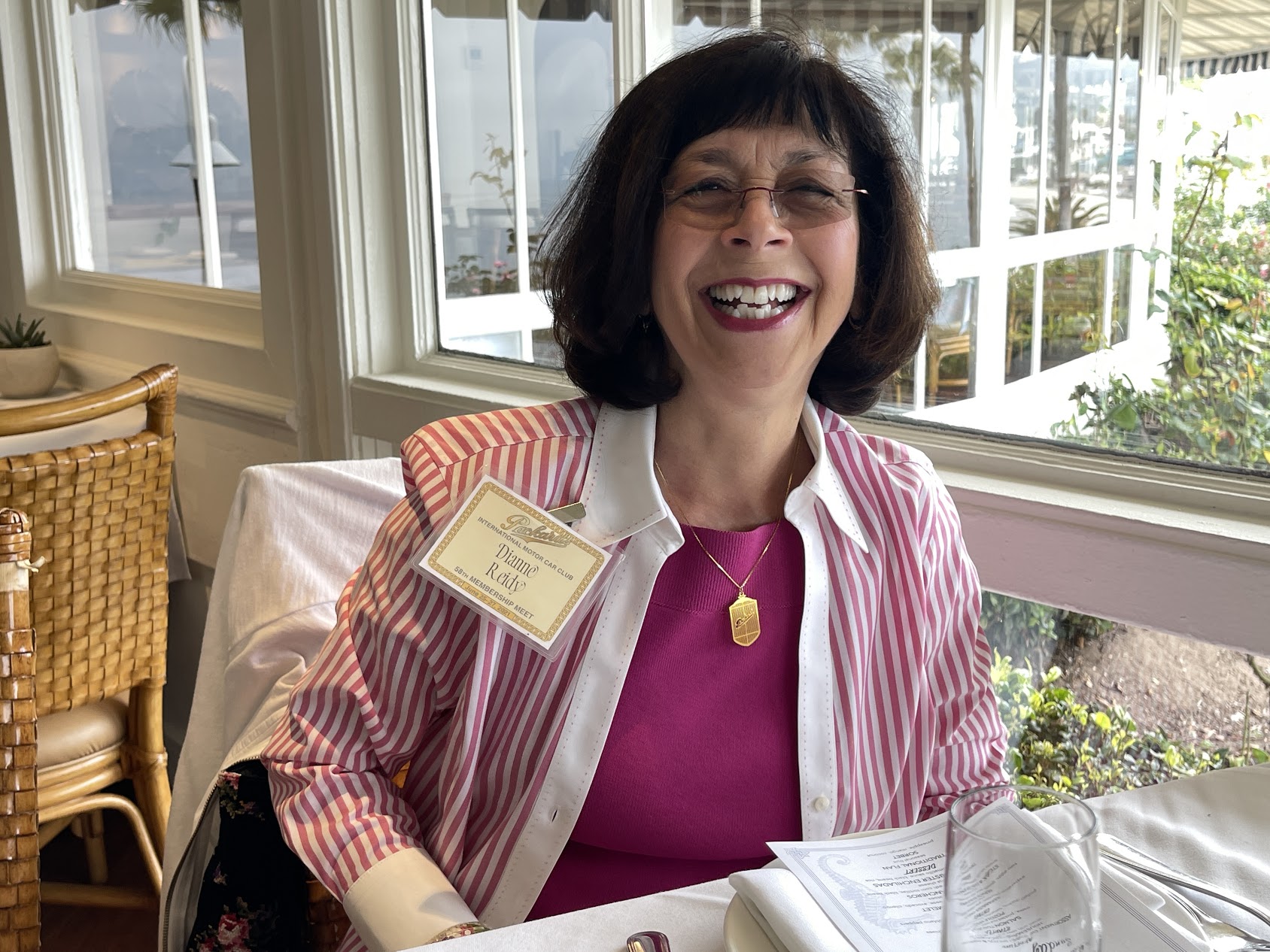 Laughing just before the spicy drink showed up!

We had a nice table of folks we either knew or met over the last three days.  Dianne prepares to finish her drink in one gulp; little does she know it is loaded with spicy peppers. 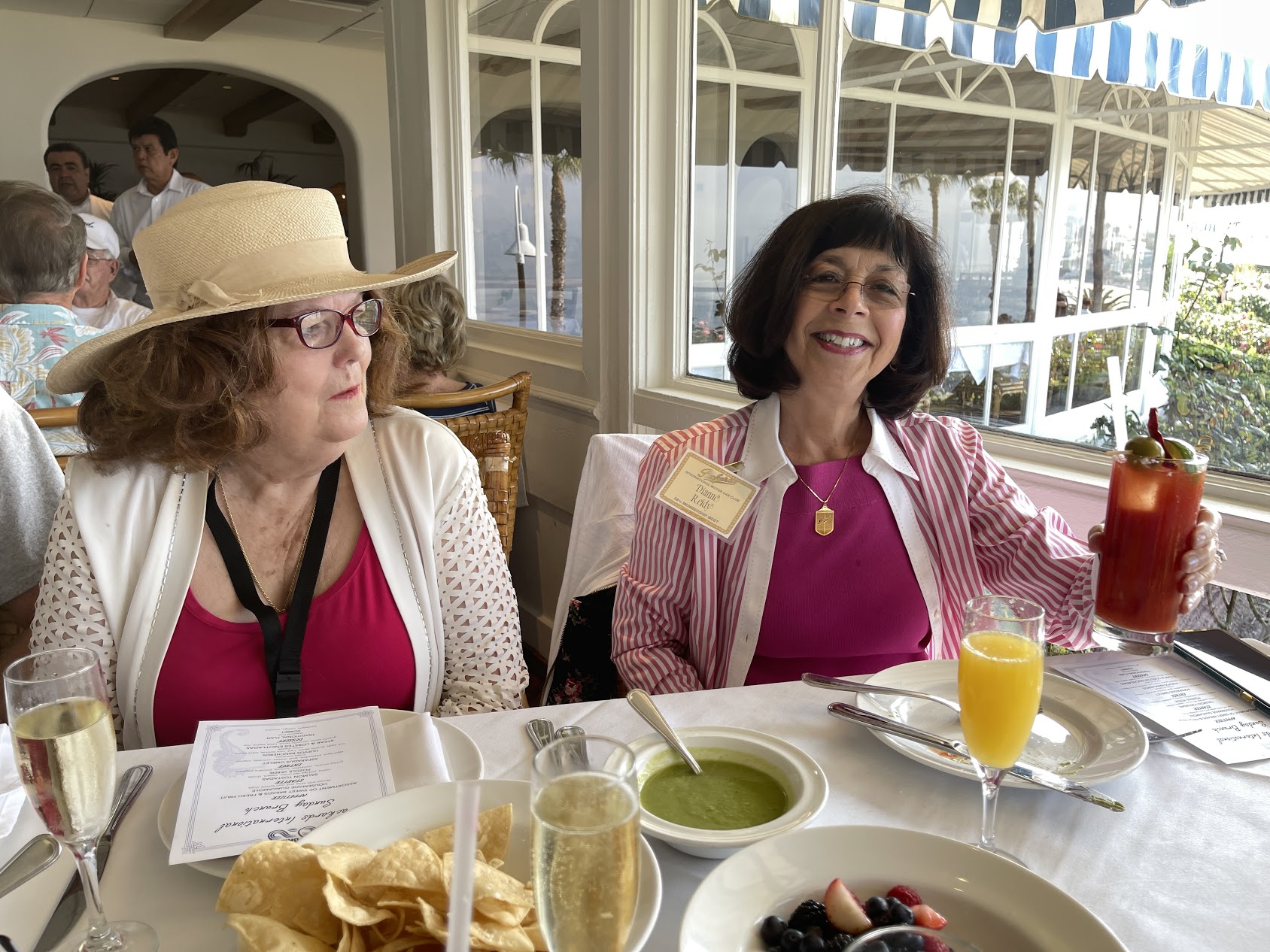 We had a great table with an amazing view!

After the first drink, Dianne had finished off three glasses of water the last time I looked, and steam was still coming out from her ears!

Dianne’s scream of pain and anguish was heard clear to Laguna Beach.  Seven people passed out, and the small children and animals ran around in circles, thinking the end of the earth was coming.  I told Dianne, “Pain is only temporary, no matter how long it lasts.”

We should have known it was hot from the fact Dianne’s fingernail polish came off when she grabbed the glass. 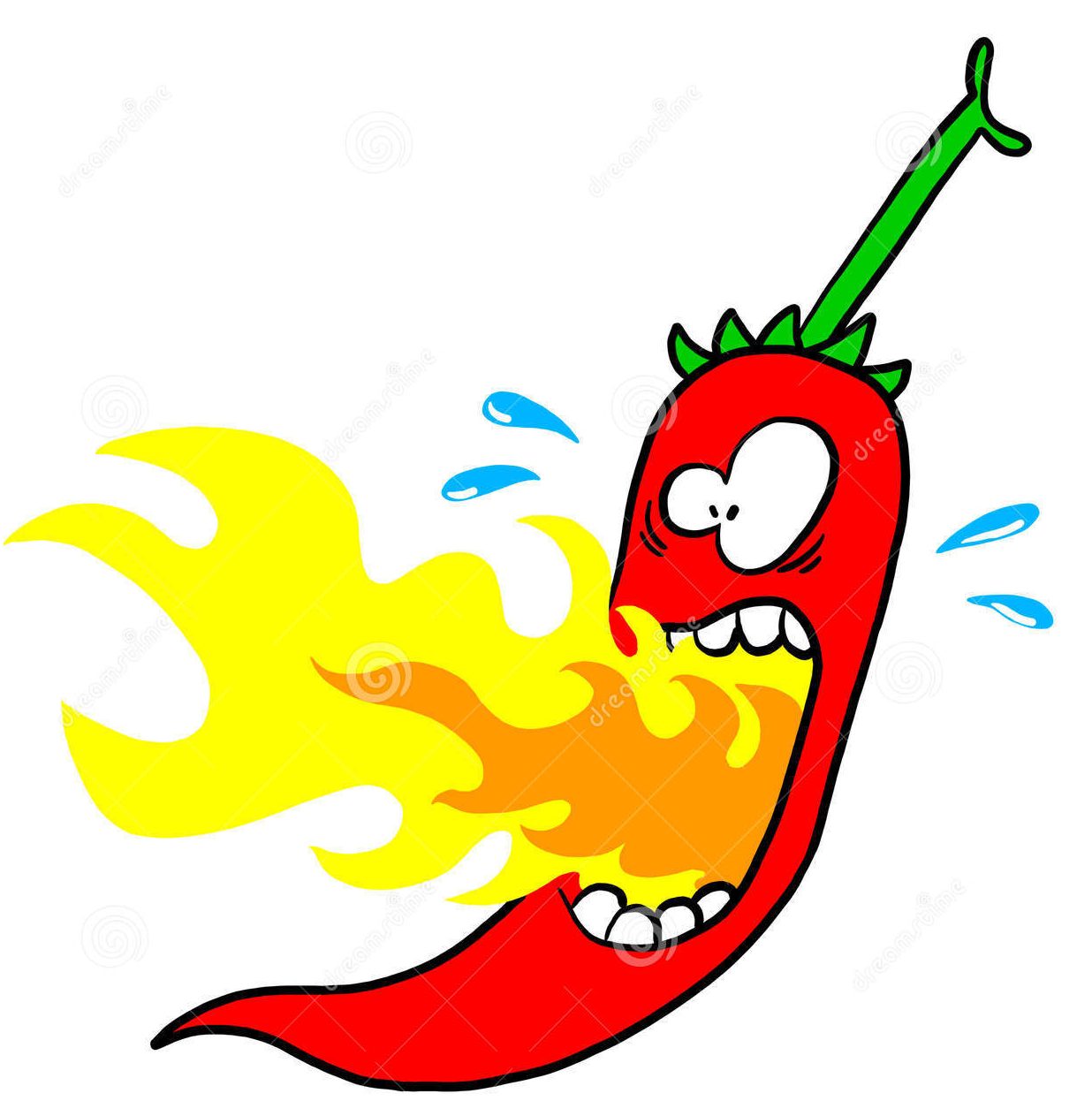 She finally got a drink she could handle after two tries; I think it was plain tomato juice.  Being a true gentleman, I forced myself to drink mine and two of hers.  I chased mine with a couple of glasses of champagne, and I was still walking.

I will admit, they were a tad spicy but nothing warranting Dianne’s streaking through the lobby yelling, “Fire in the belly; Bring me water!!”  Mary thwarted her attempt to dial 911 and report a fire.

After a few minutes, Dianne returned to normal, and the steam from the ears seemed to stop. 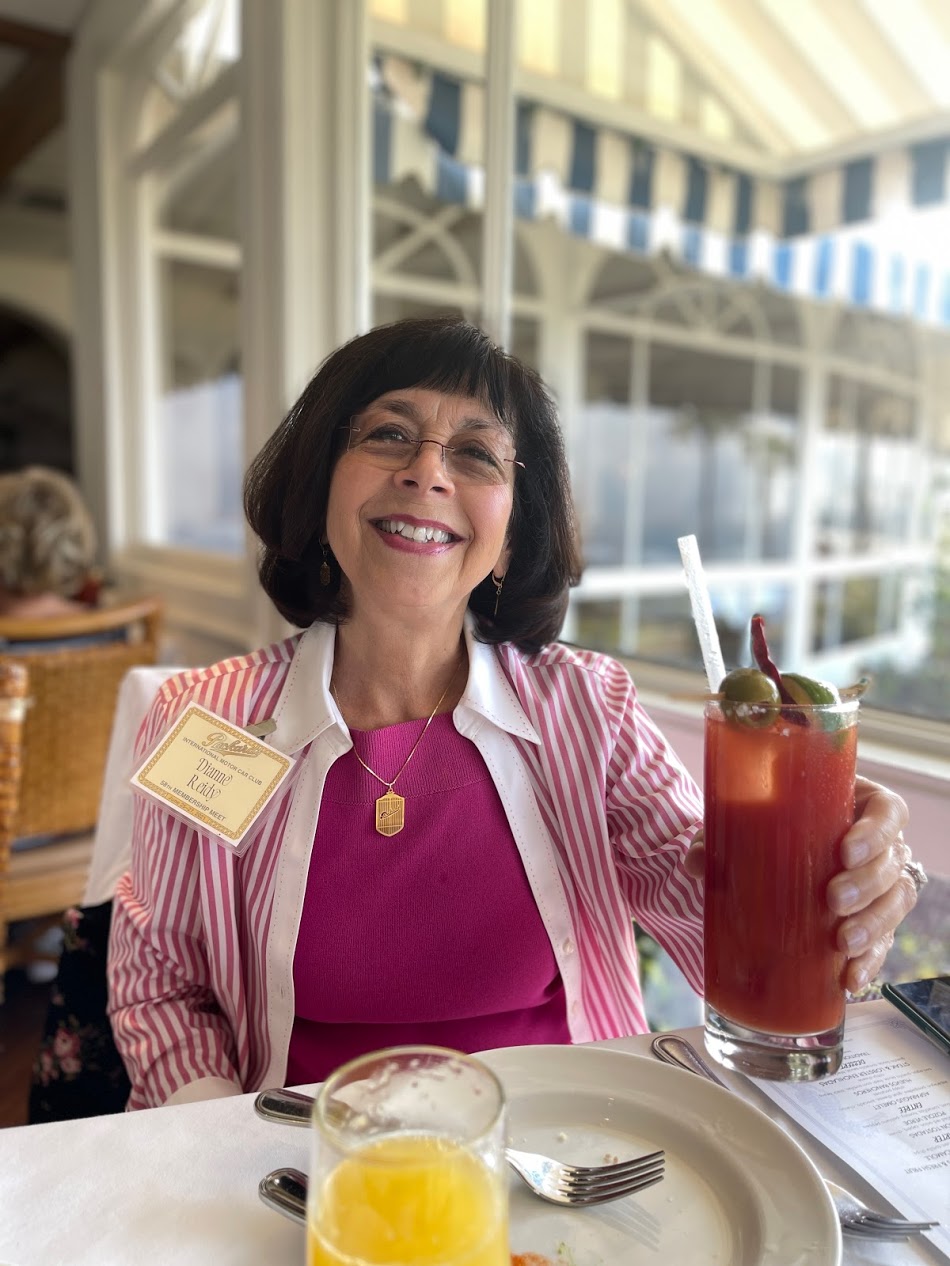 Dianne was in rare form; ask her about spicy BMs!

Breakfast was served, and it was sooooooooo good.  The presentation was perfect.  Mary and I ordered different things and shared them; it was a perfect breakfast! 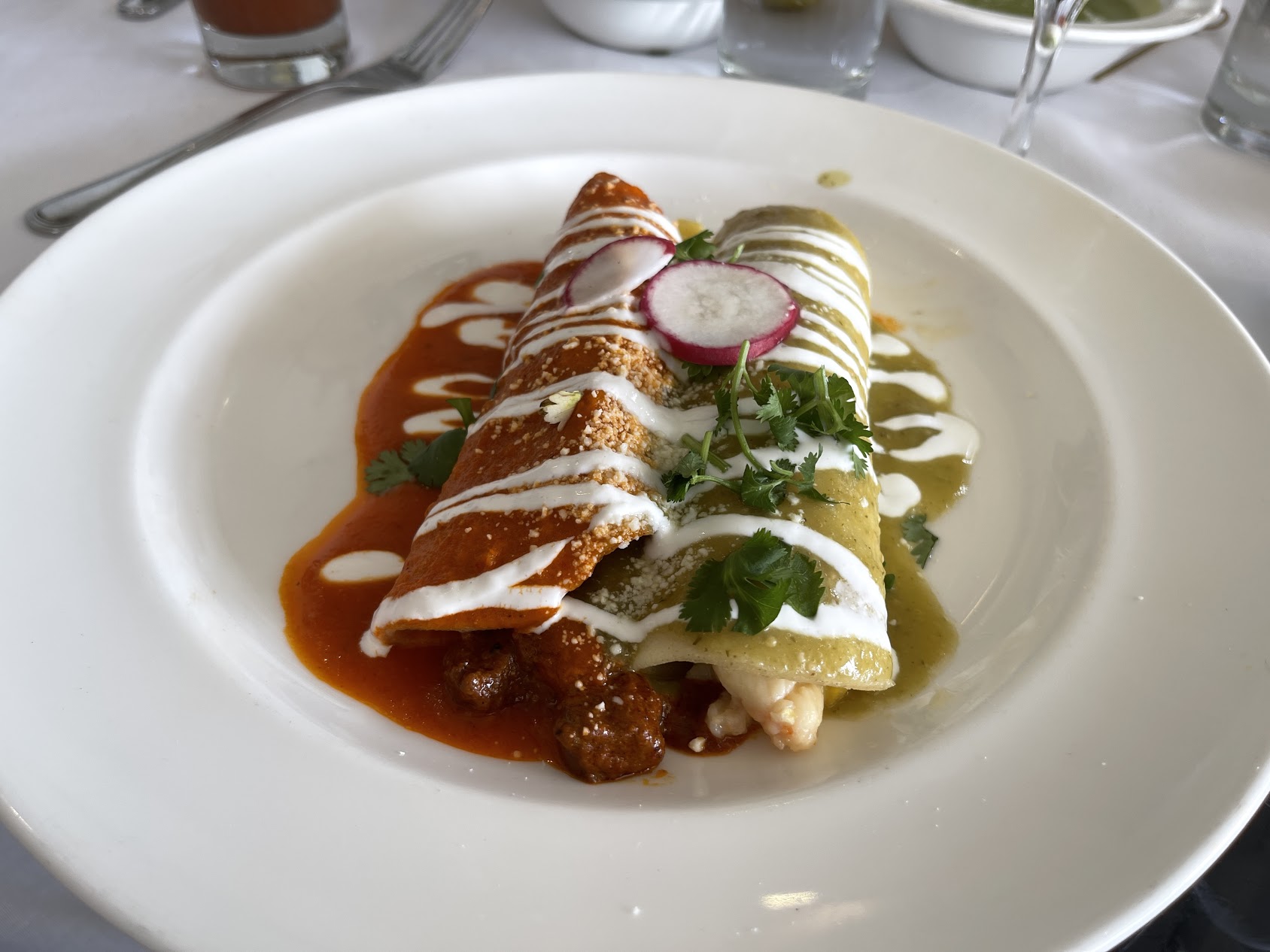 The food was amazing.

After a long breakfast, we decided to see some cars and walk along the bluffs overlooking the beach.  According to how I felt, we walked for over 54 miles but methinks it was only 1 mile plus or minus.

Mary viewed some of the Packards before we walked.

The view was quite nice in the morning sun, and the roses were in full bloom. 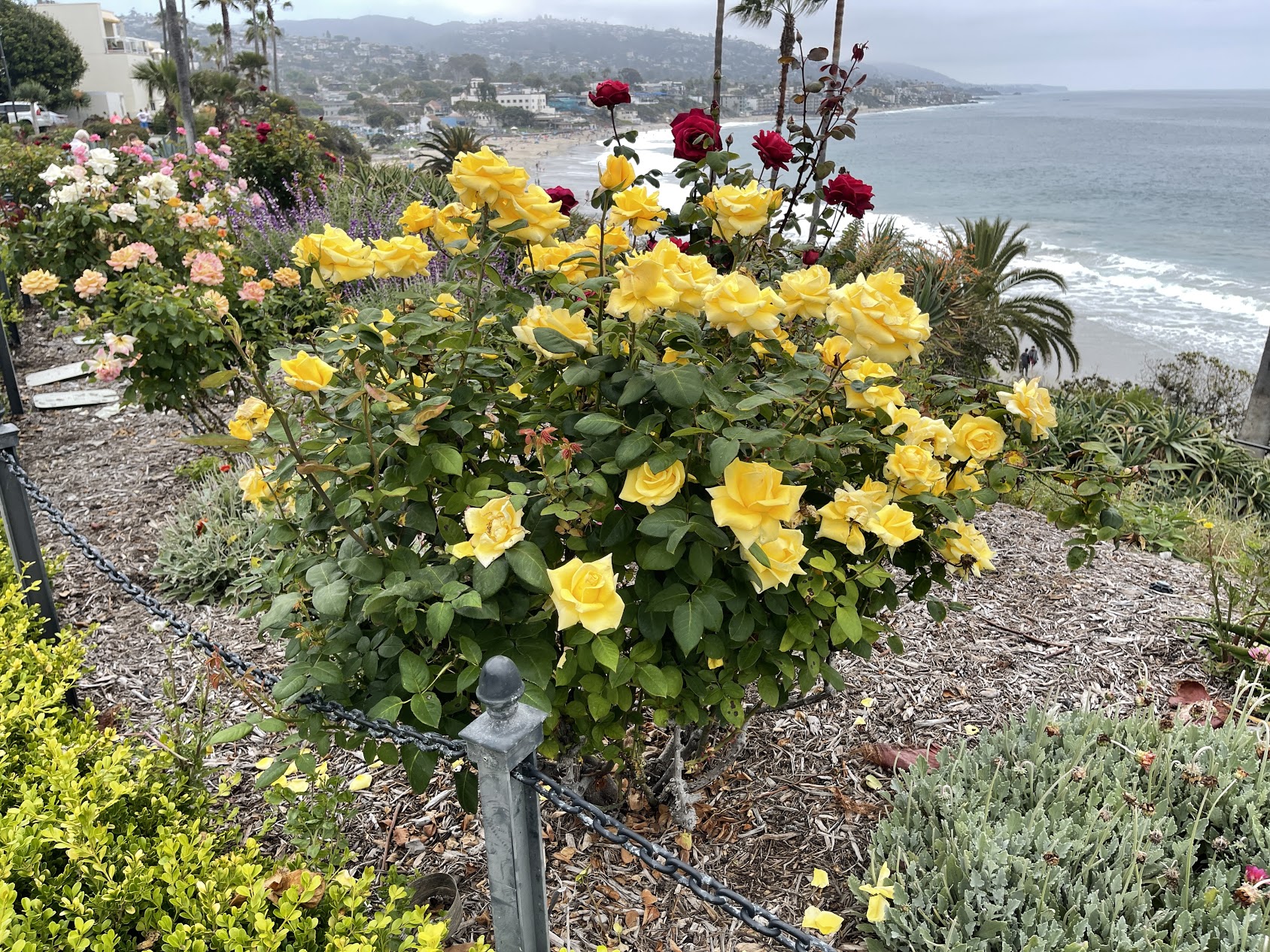 We walk about a mile down the coastline; everything was magnificent.

My head cold was NOT doing well, so we headed for home.  By the time I go home, I laid down and took almost a three-hour nap.  I arose from the dead about 4:00 PM.   I should have gone to the doctor Friday.  As Albert Einstein once said, “The difference between stupidity and genius is that genius has its limits.”

We went to Casa Valencia for a little bit and did some watering and fixing up. We had company as Vicky and Yollie came over to visit, followed soon by Marianne and Craig.  They got a tour of the house, which is still looking like a battle zone. 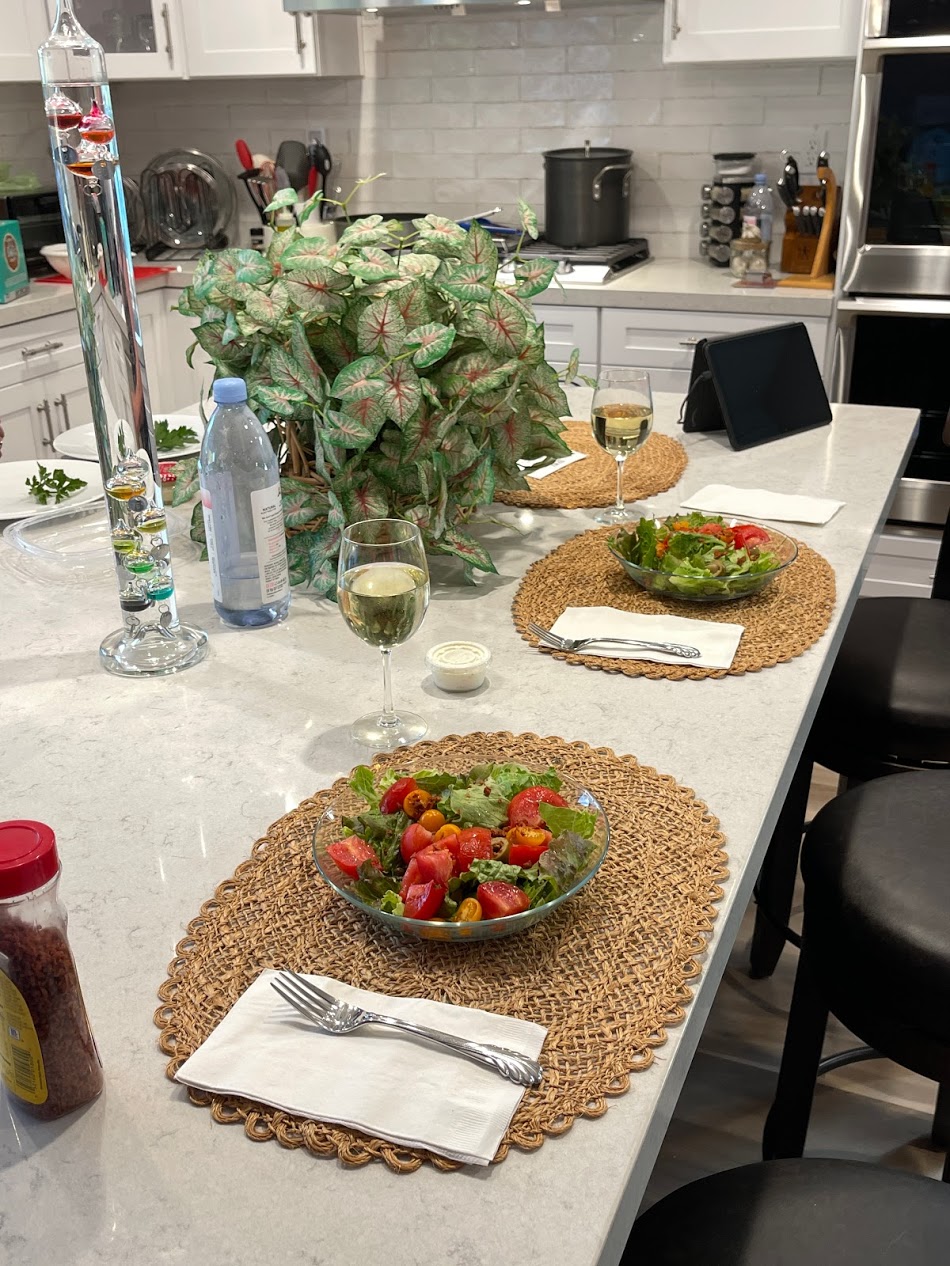 I was tired but never too tired to eat Mary’s cooking!!

The kitchen island is a great place to dine! 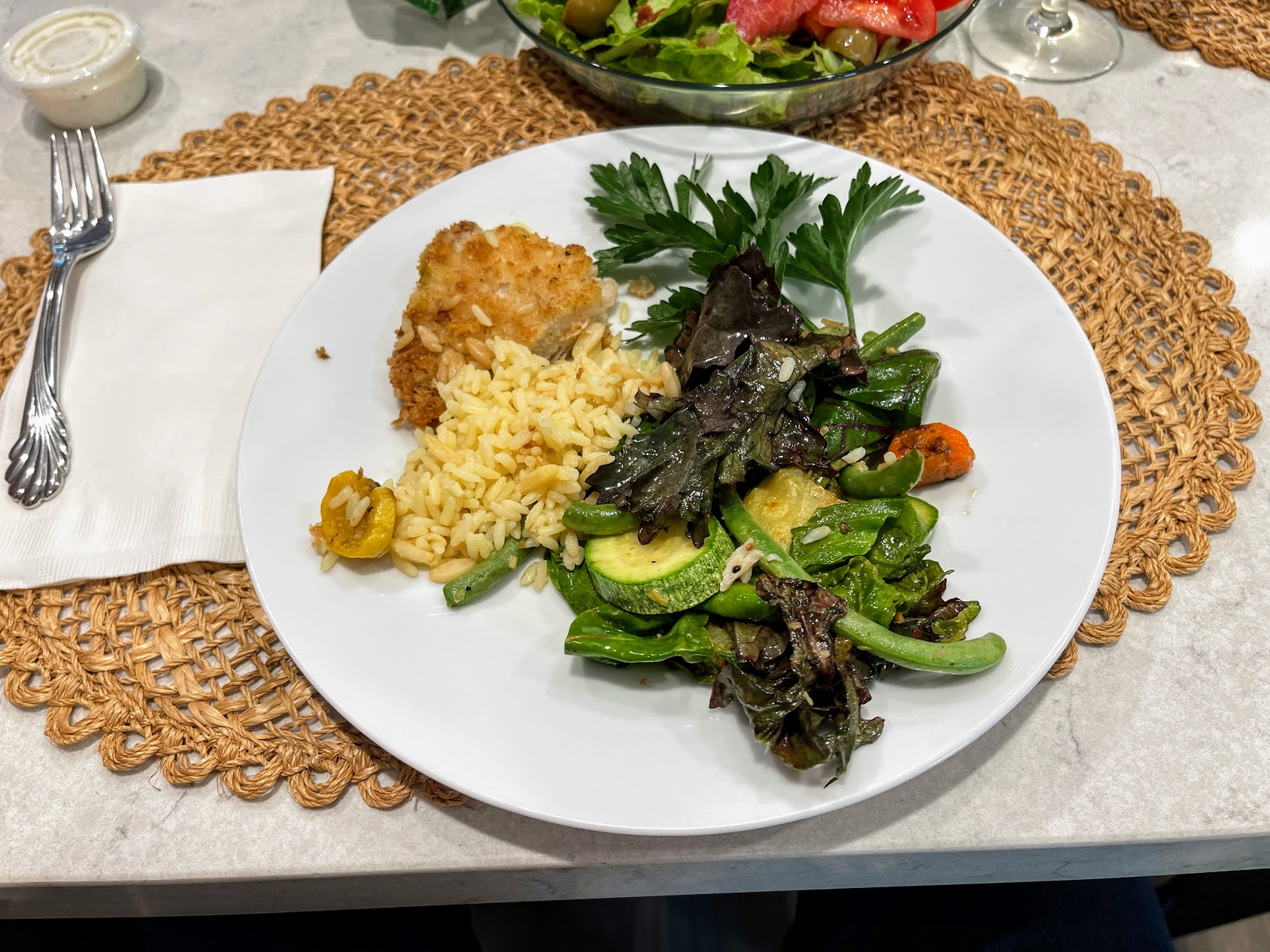 Mary went picking in our distributed garden and made dinner!

We cleaned up, headed for Mary’s as I was starting to cough again.  Arriving at Mary’s, I went upstairs and crashed; the coughing was out of hand.

Just an old retired guy trying to finish out my last years on this planet. I lost my best friend and wife in early 2020. I am involved seriously with a long-time friend, Mary, and life goes on.
View all posts by Paul →
This entry was posted in Adventures, Food and Wine, Friends, Walking, Working Around House. Bookmark the permalink.