What’s Irish and stays out all night? Paddy O’Furniture.

Robin stayed last night, and we were all up bright and early, calling Colleen to harass her on the bat phone.   I had to excuse myself as I had a test at 9:30 AM that I had to study for.

I don’t ever get blood tests. It’s not because I’m afraid of needles or anything.  It’s just that my blood’s under enough pressure as is.

After returning from the test, Mary and I picked goodies from the garden.  The veggies will be FRESH, only hours old! We had peas of several varieties and other goodies.  The cabbages below were huge! 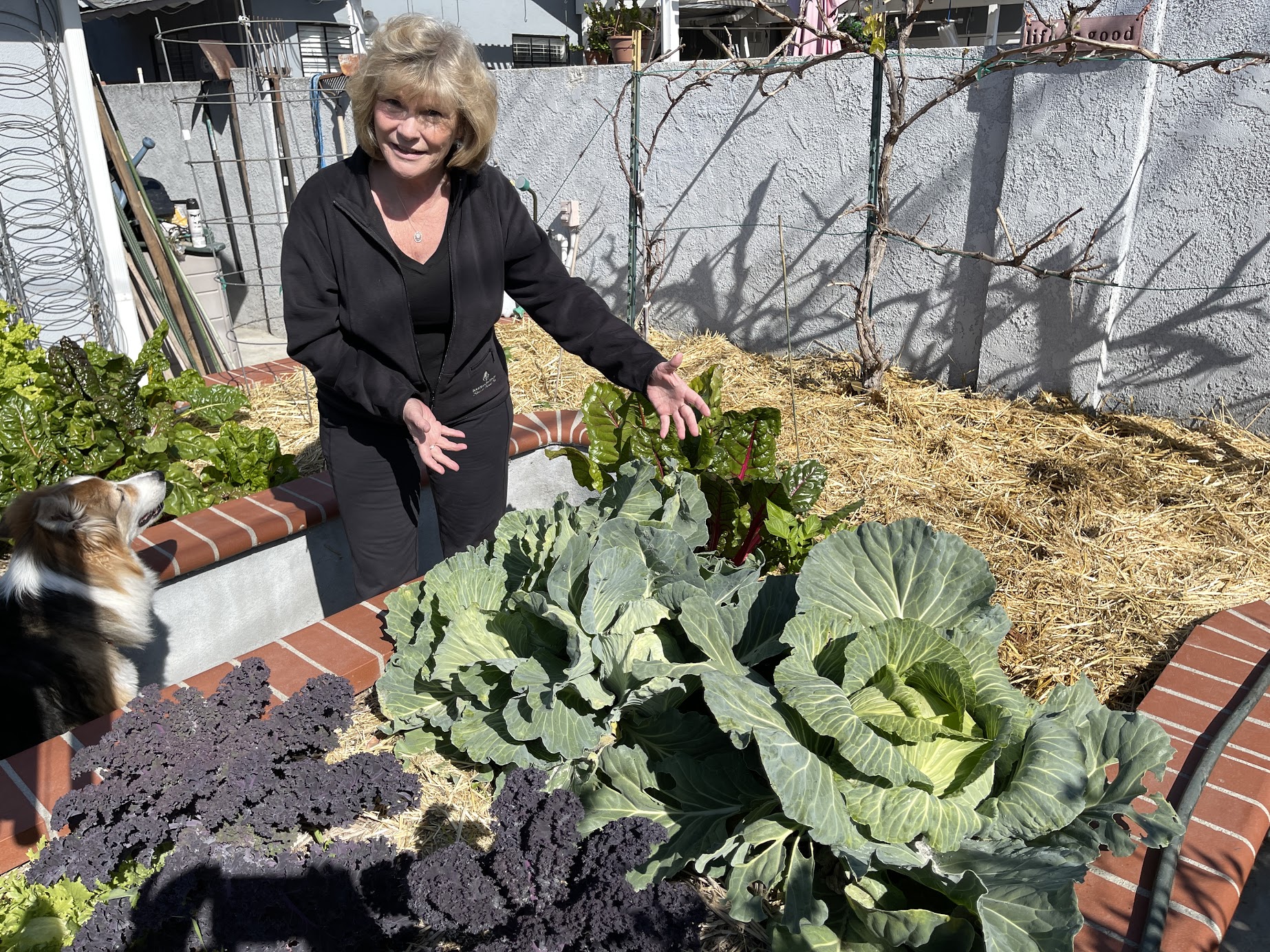 We got to Mary’s about 1:00 PM and began to get ready for this evening.  We sliced and diced and otherwise bagged everything as cooking was scheduled to start at 3:00 PM.  Our guests would begin showing up at 5:00 PM.  I told Mary I just got kicked out of a secret cooking society.  I spilled the beans. 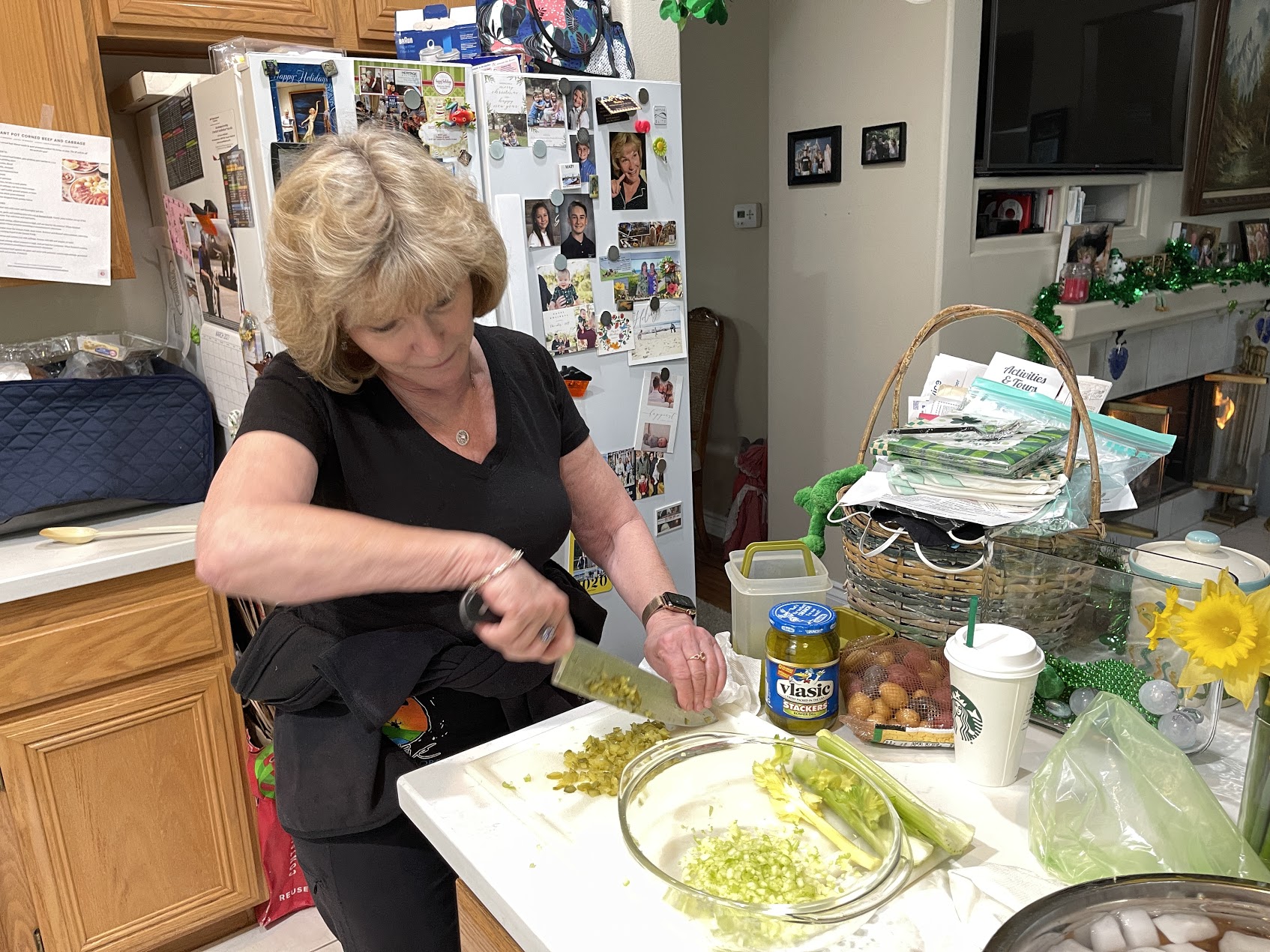 Wait until you see the video!

I could NOT resist; Mary was doing an Irish jig and singing to the Irish channel on iHeart radio. Go, Girl, Go!!!

Now comes the serious part, removing the skins from the garlic cloves.  So, you separate the cloves, take a knife, cut the two ends of each clove, and then put the cloves in a mason jar.  Shake, rattle, and roll the jar, and the skins come right off.  It’s magic.  This could be rated “X”!

The potatoes came from my yard this very morning.  They were perfect! We cut the big ones in half so they would all be approximately the same size. 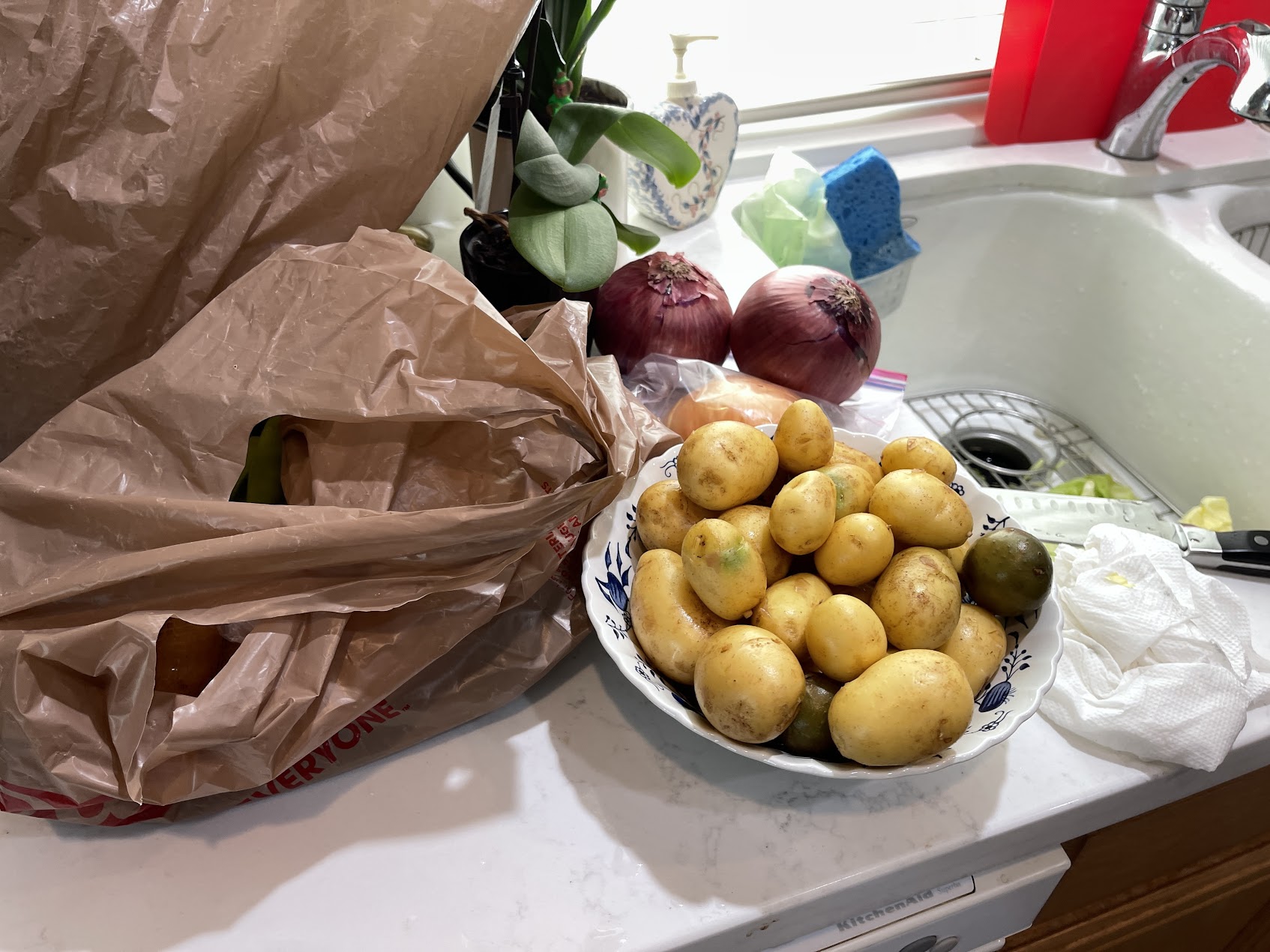 Potatoes from my yard.

The Instant Pot’s were loaded and moved about the kitchen and patio.  We were afraid of plugging them into one circuit as they are about 1500-1800 watts per pot.  We had three four-pound flat-cut corned beef briskets, so one went into each pot.  We put potatoes, onions, and garlic in the bottom of the pot and then the beef.  We used a cup of water and a cup of stout Irish beer in each one.  The tops were slammed shut, and after 90 minutes of high-pressure cooking, we removed the beef.  Then we loaded the pots with carrots and cabbage, which cooked for four minutes.  It was time for dinner! 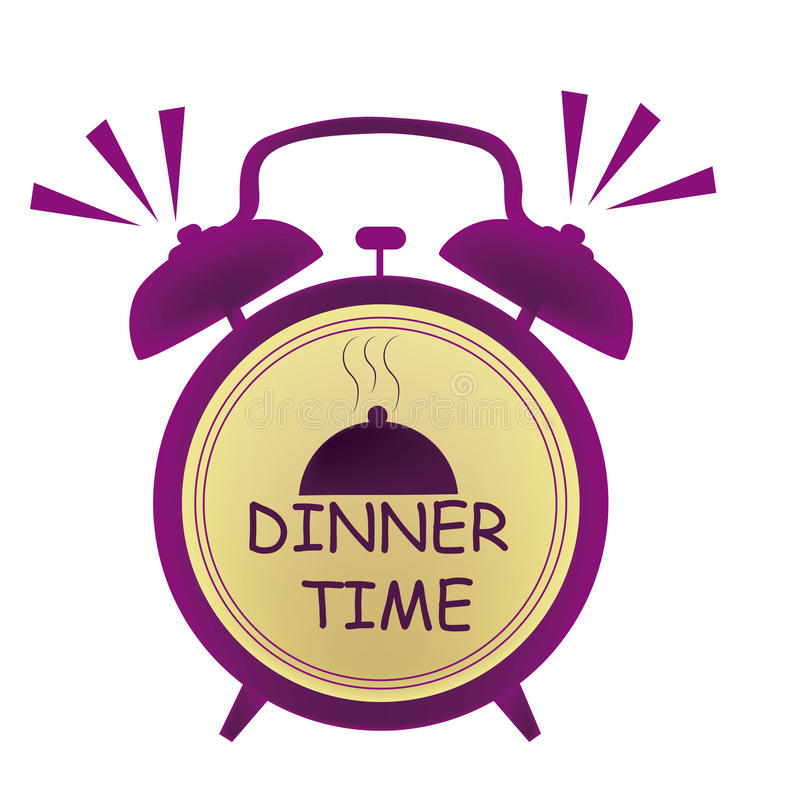 Guests began to arrive right on time; they all knew Mary’s cooking and wanted to get their first!  Bob Z. was first followed by Dianne, Bob, and Robin, and then David. Bob and Robin were hot on their trail.

Bob found the horses do-oovers and attacked them with vigor.  The green deviled eggs were quite a hit!  Mary goes to a lot of trouble to make everything pretty also!  I had to ask Bob, “What’s the main difference between an Irish wedding and an Irish funeral?
one less drunk at the party!” 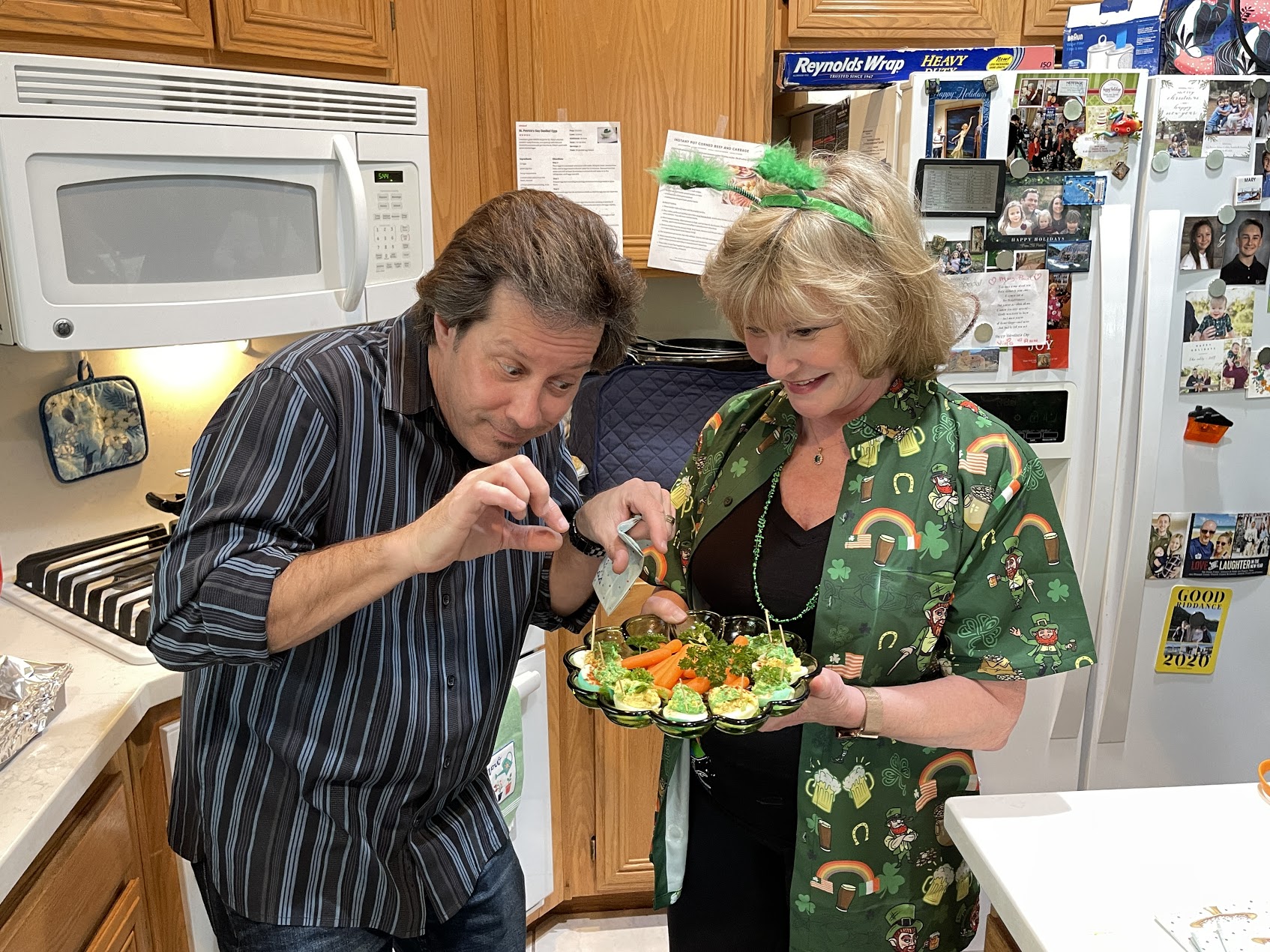 The boys finished their work and were resting.  They looked like a collection of modern R2D2’s.  They got their little baths, and then we put them away until next time. 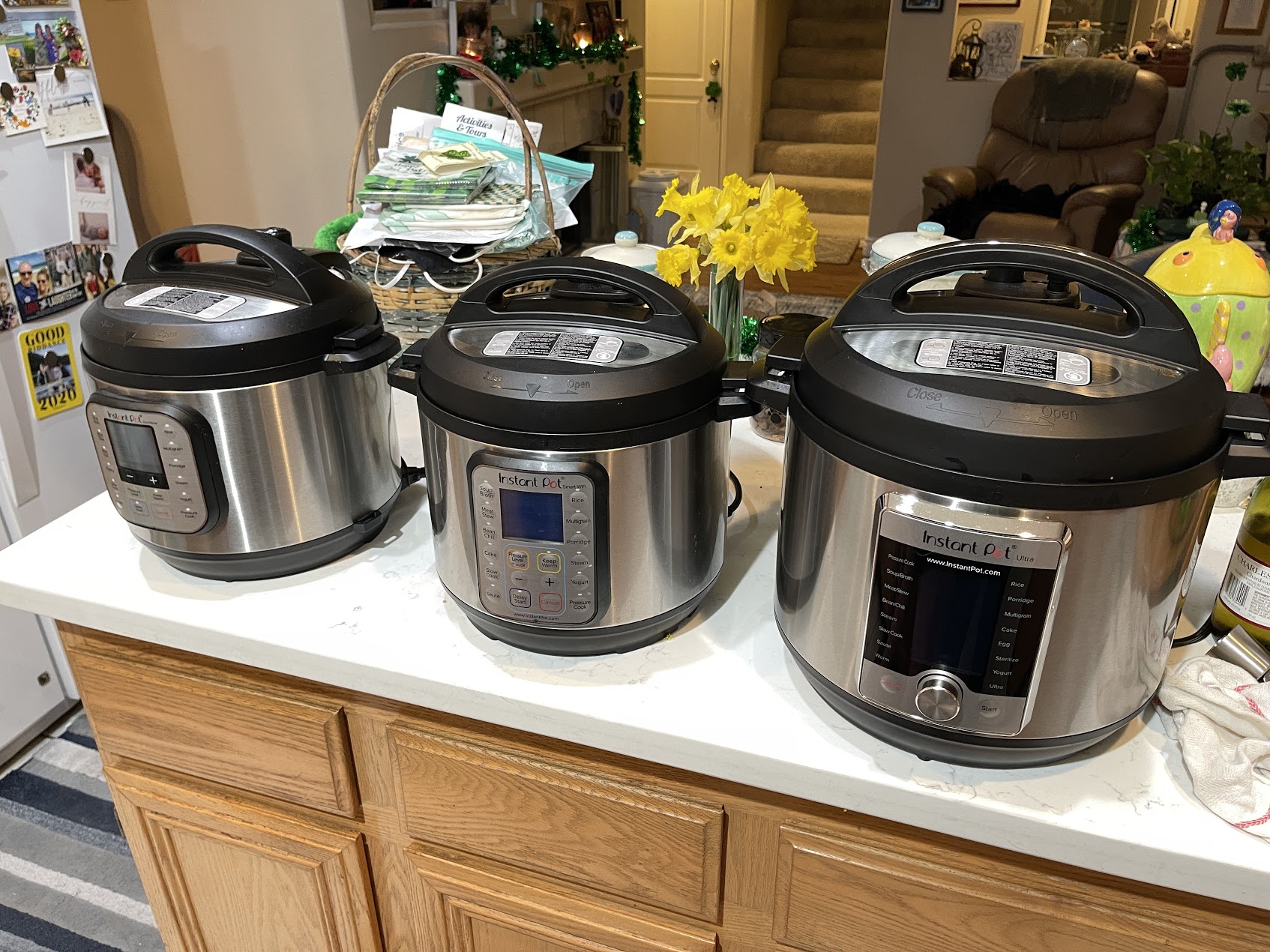 We went through about eight pounds of corned beef and a load of cabbage.  We told David, “Drink green beer on St. Patrick’s Day! It counts as a vegetable!” 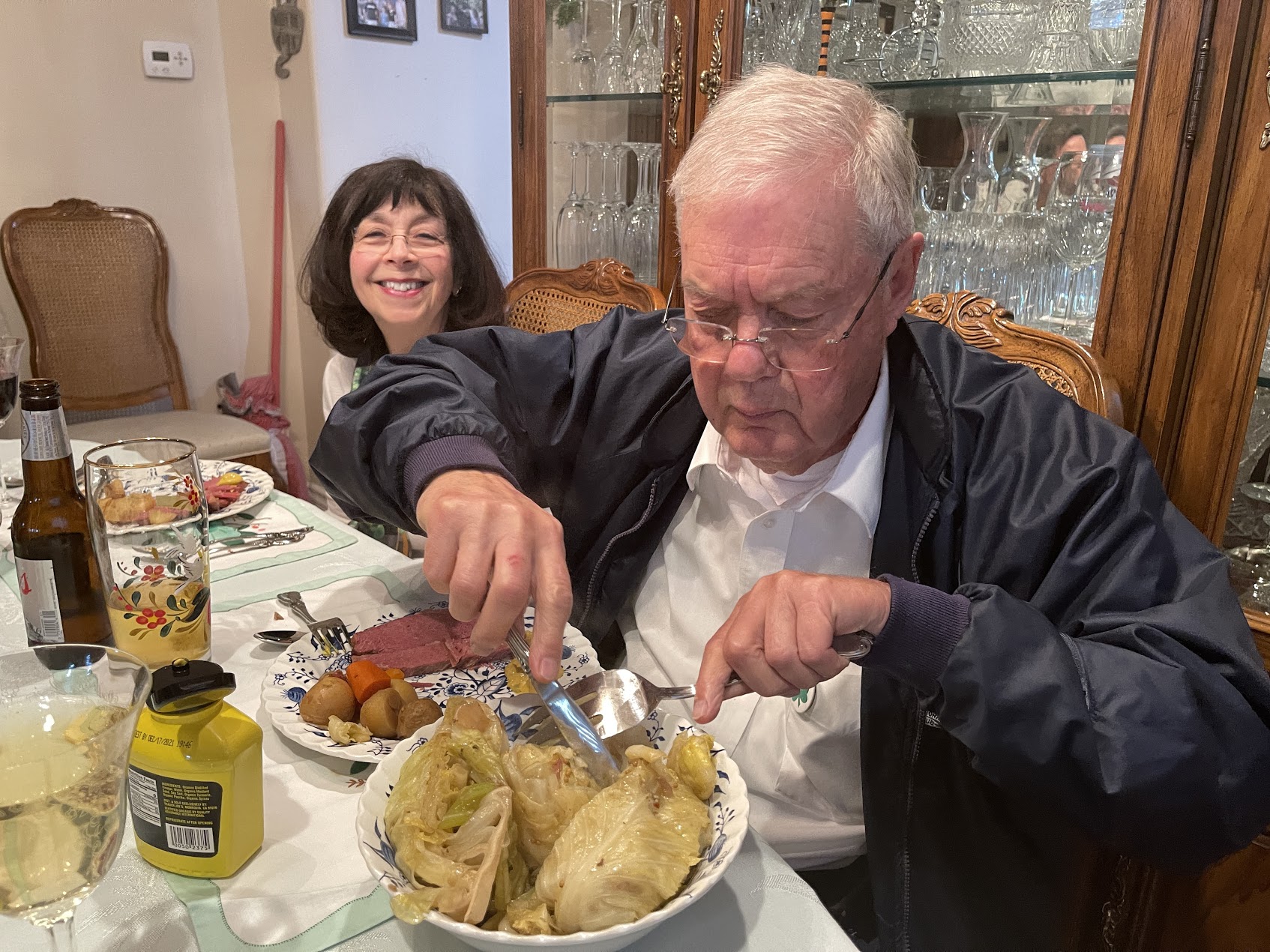 David goes after the cabbage.

Robin wanted to sit between the Bob’s; she wanted a “Bob Sandwich.”  She decided to sit near to dad it was probably a lot safer. The conversation was quite lively with stories being told, and they will be remembered for a long time!  Bob chimed in with a joke: James said to his friend Daniel, “I know a girl who married an Irishman on St. Patrick’s Day.”
Daniel said, “Oh really?” James said, “No, O’Reilly.”  We apologize! 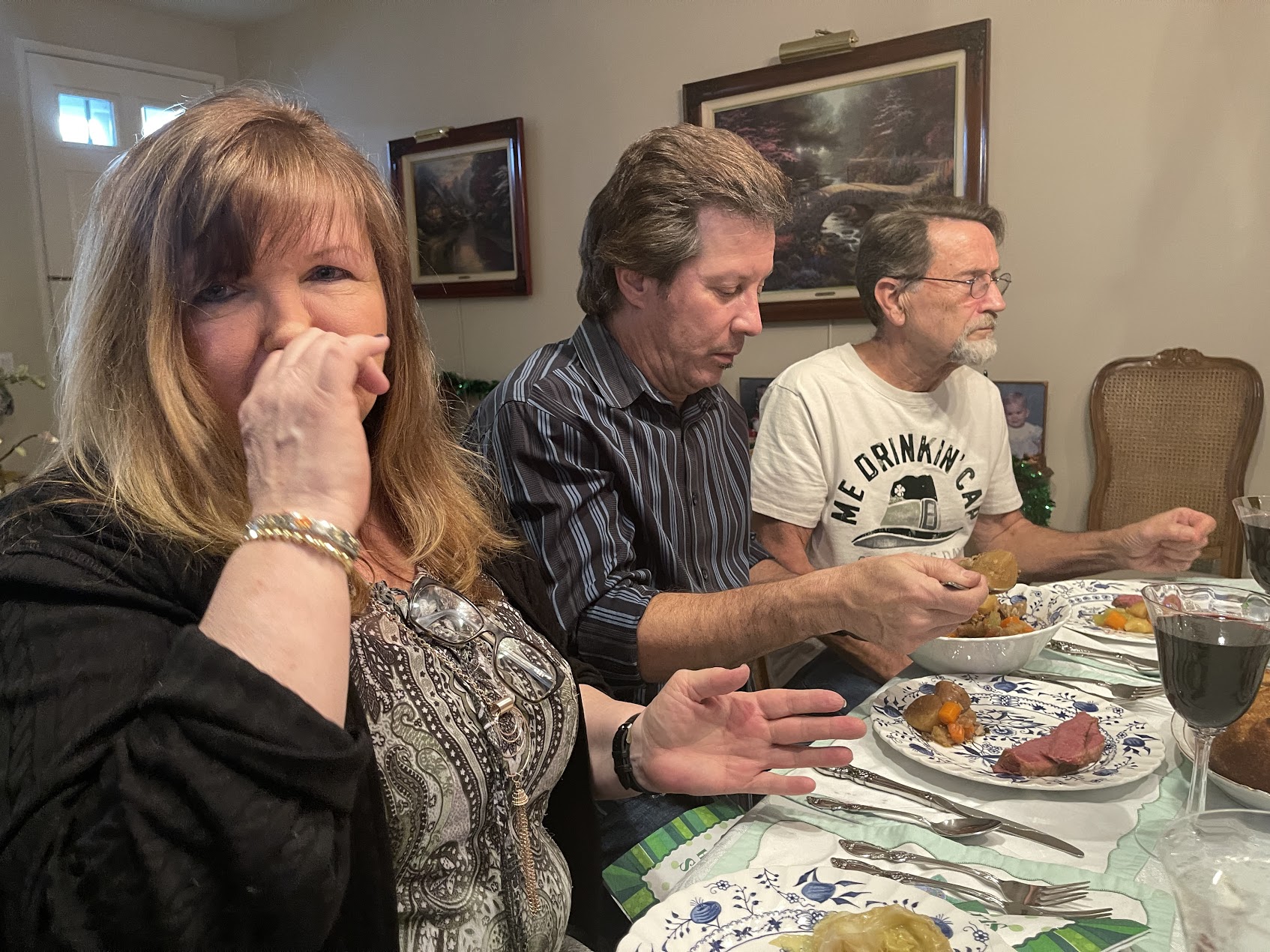 She was almost a Bob sandwich!

Dianne and Mary; watch out for them; a force to be reckoned with!  They were in charge of dessert.  I want to have a good body, but not as much as I want dessert.  Remember, “Life is uncertain. Eat dessert first.” 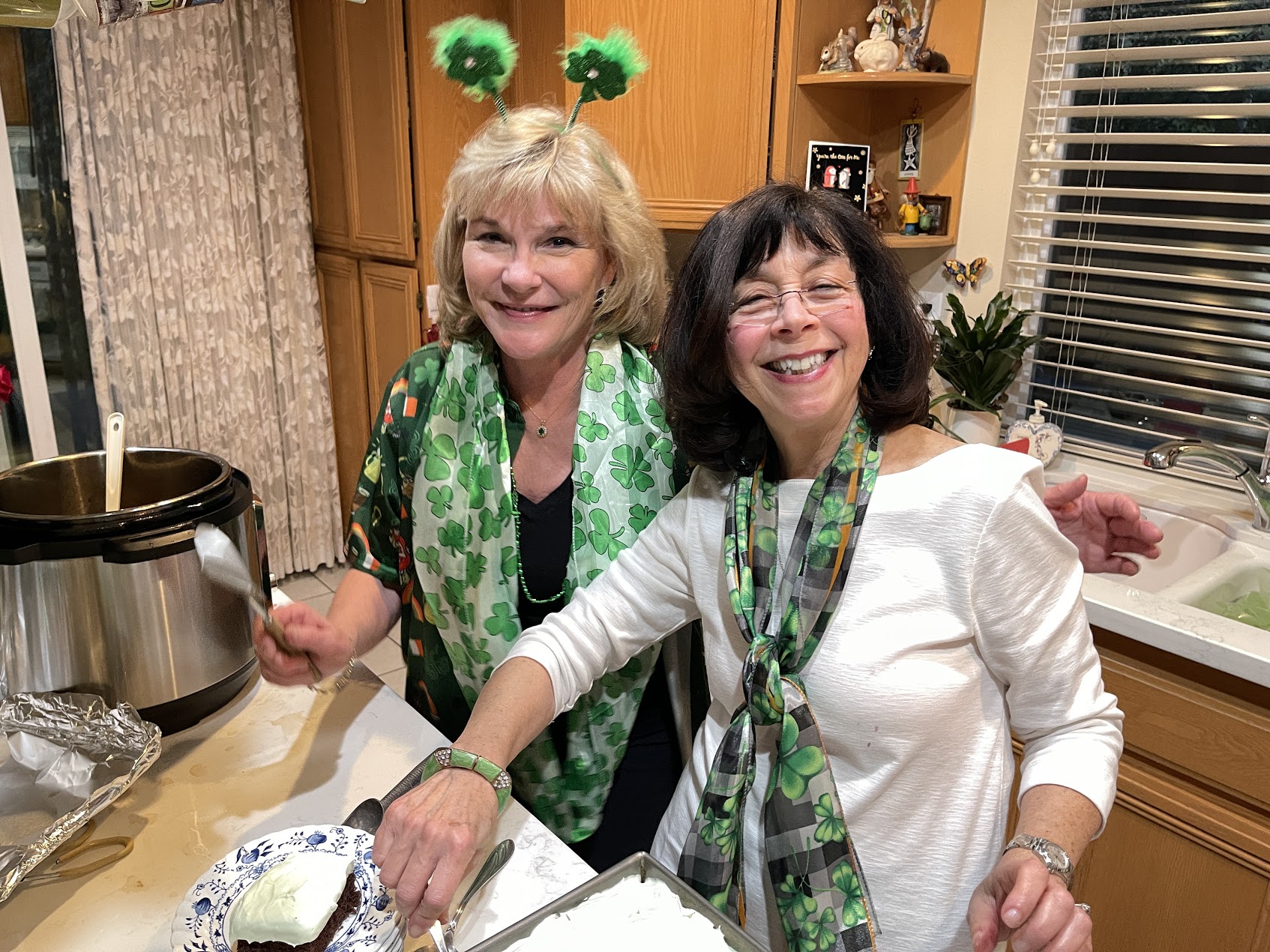 Watch out when these two are together. 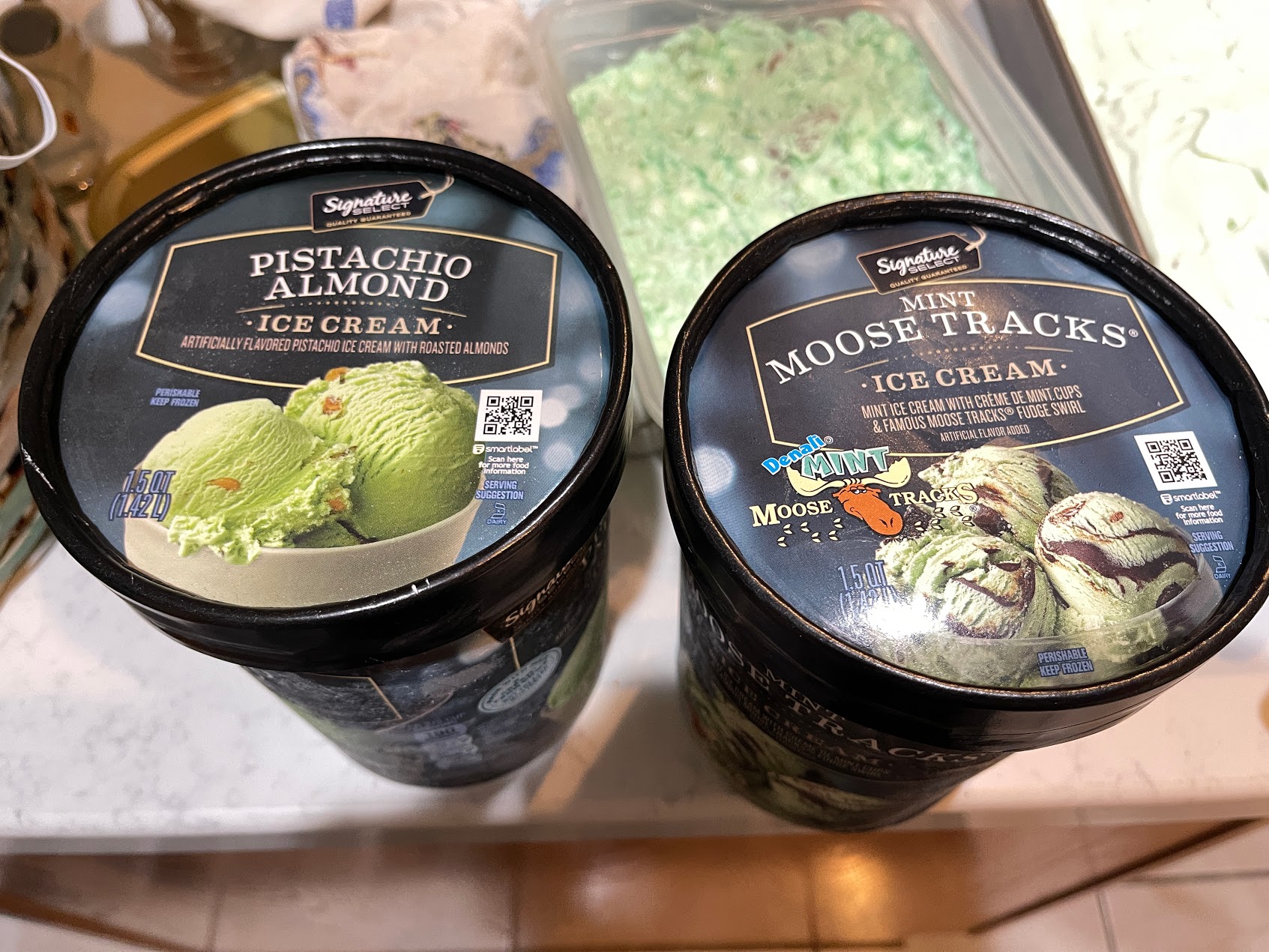 Robin made sure I was in at least one picture!  It’s tough being the cameraman. 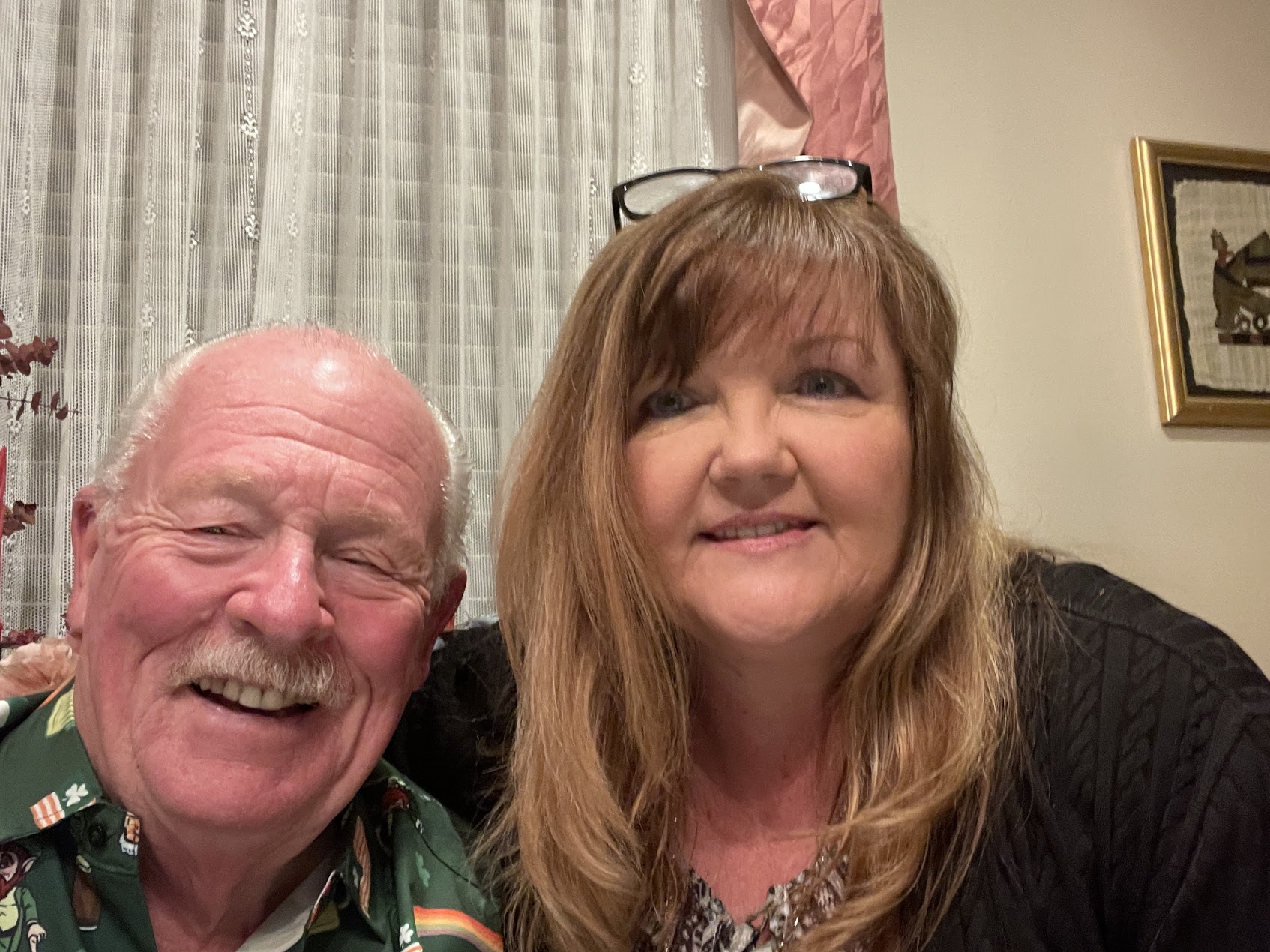 Thank you, Dianne, for taking a picture of all of us! 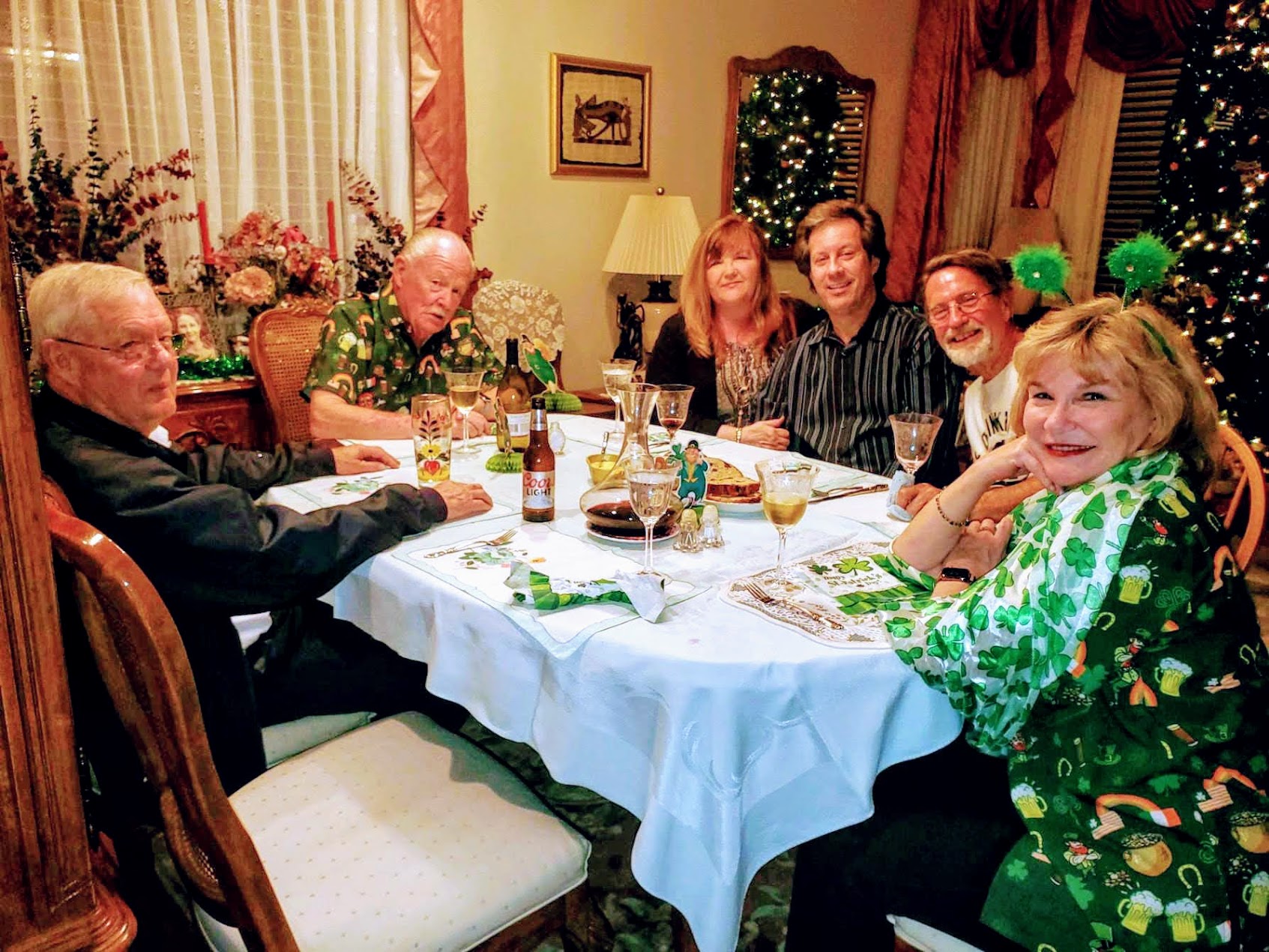 It was a beautiful evening being with family and friends.  Thank you all for making this day very special.

Just an old retired guy trying to finish out my last years on this planet. I lost my best friend and wife in early 2020. I was blessed again by reconnecting with Dr. Mary Côté, a long-time friend. Mary and I got married July 28th, 2021, and are enjoying life together and plan to spend the rest of our lives being a blessing to our friends and family.
View all posts by Paul →
This entry was posted in Cooking, Dancing, Family, Food and Wine, Friends, Fun, Holidays, Working Around House. Bookmark the permalink.