Monday Was Delightful; We Gardened And Cooked!

Indoors or out, no one relaxes in March, that month of wind and taxes; the wind will presently disappear, the taxes last us all the year.

Mary came to my place this morning as we had plans to cook and work in the garden. I needed to water the straw that my son Joe dropped off Sunday before I unbundle it and spread the mulch in the garden.  I was happy to see her!

Before she left her place, she sent me a picture of the St. Patrick’s Tree in the daylight. It looks pretty good! I asked Mary when she arrived, “They say St. Patrick drove the snakes out of Ireland. I wonder if he could do that for Congress.”

Mary responded with, “Why did St. Patrick drive all the snakes out of Ireland? He couldn’t afford plane fare.”

What would you get if you crossed a Christmas Tree with a St. Patrick’s Day Tree?  You would have a St. O’Claus Tree! 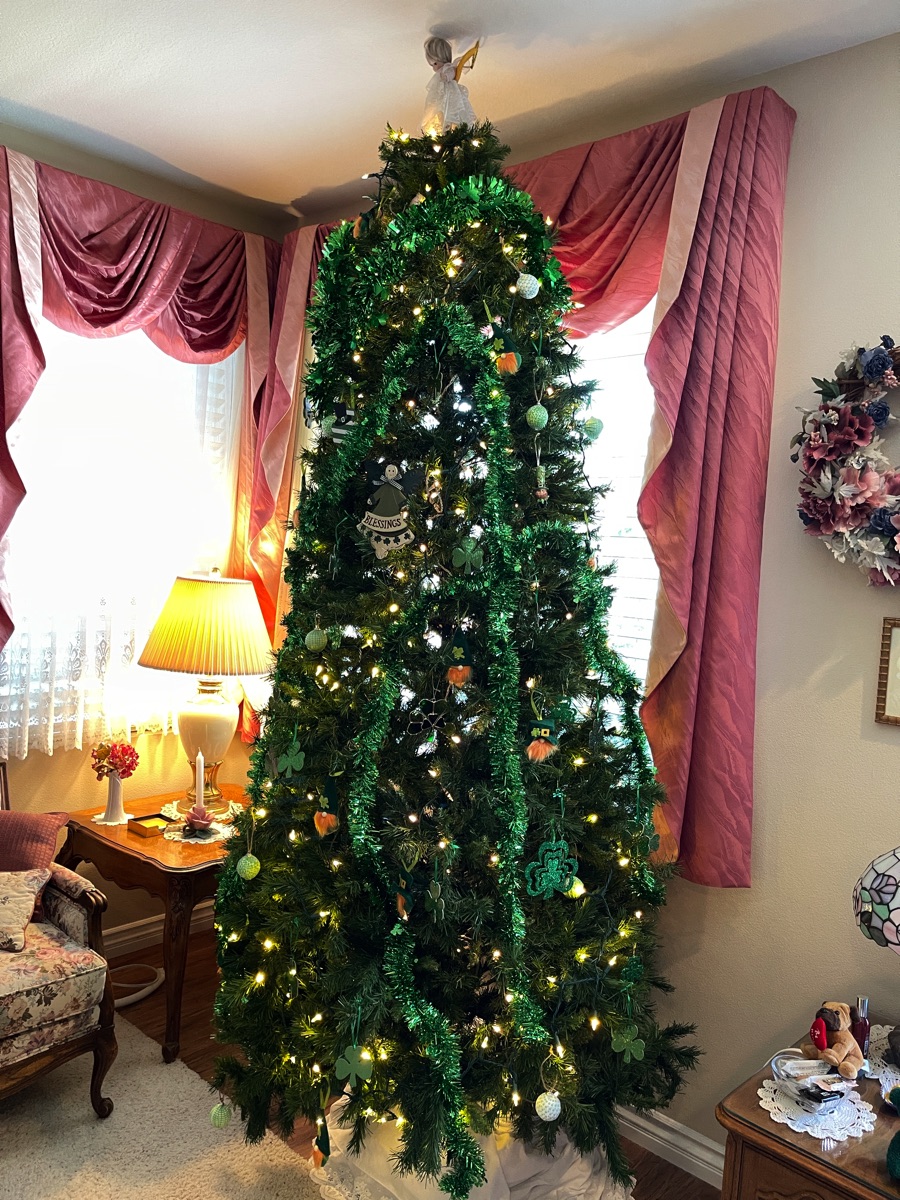 We complete the St. Patrick’s Tree!

De decided to make Corned Beef and Cabbage for Del, one of his favorites.  MAry took inventory of my pantry, and we formulated a list.  To Ralph’s Market, we went collecting necessities and some other goodies!

Someone stacking shelves dropped a packet of alphabet spaghetti on the floor. That could have spelled disaster 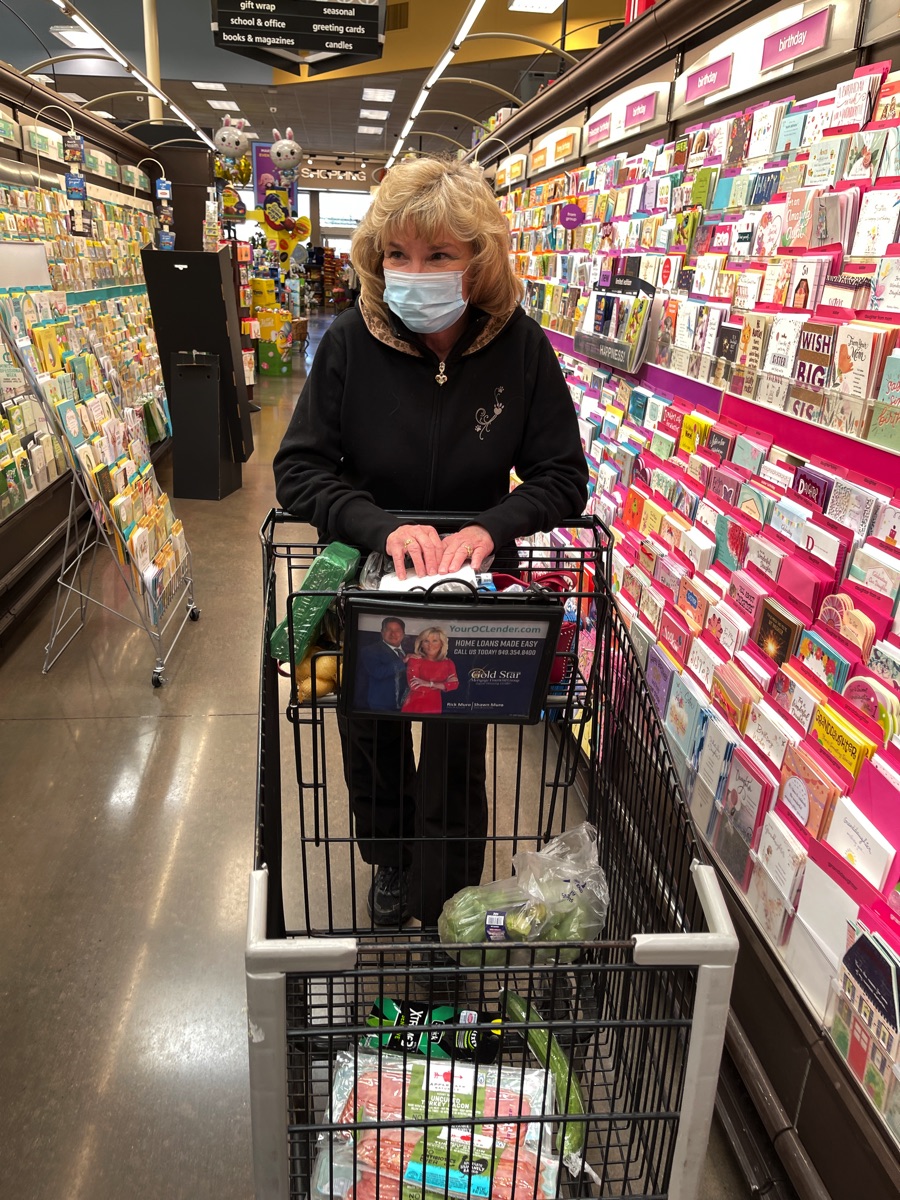 we had to go shopping for CB&C

We put things away, and Mary is getting quite used to my kitchen, so it went fast.  We sliced and diced and threw everything into the pressure cooker!  Mary was a bit leary of the pressure cooker because, in 1997, she had one blow-up spraying food all over the kitchen just before she was hosting a party.  I assured her all would be well!

What we didn’t get at the market we found in the garden.  We both love gardening and have fun playing in the dirt!   By the way, what do you call a man who gives a cabbage a job? A Head hunter. 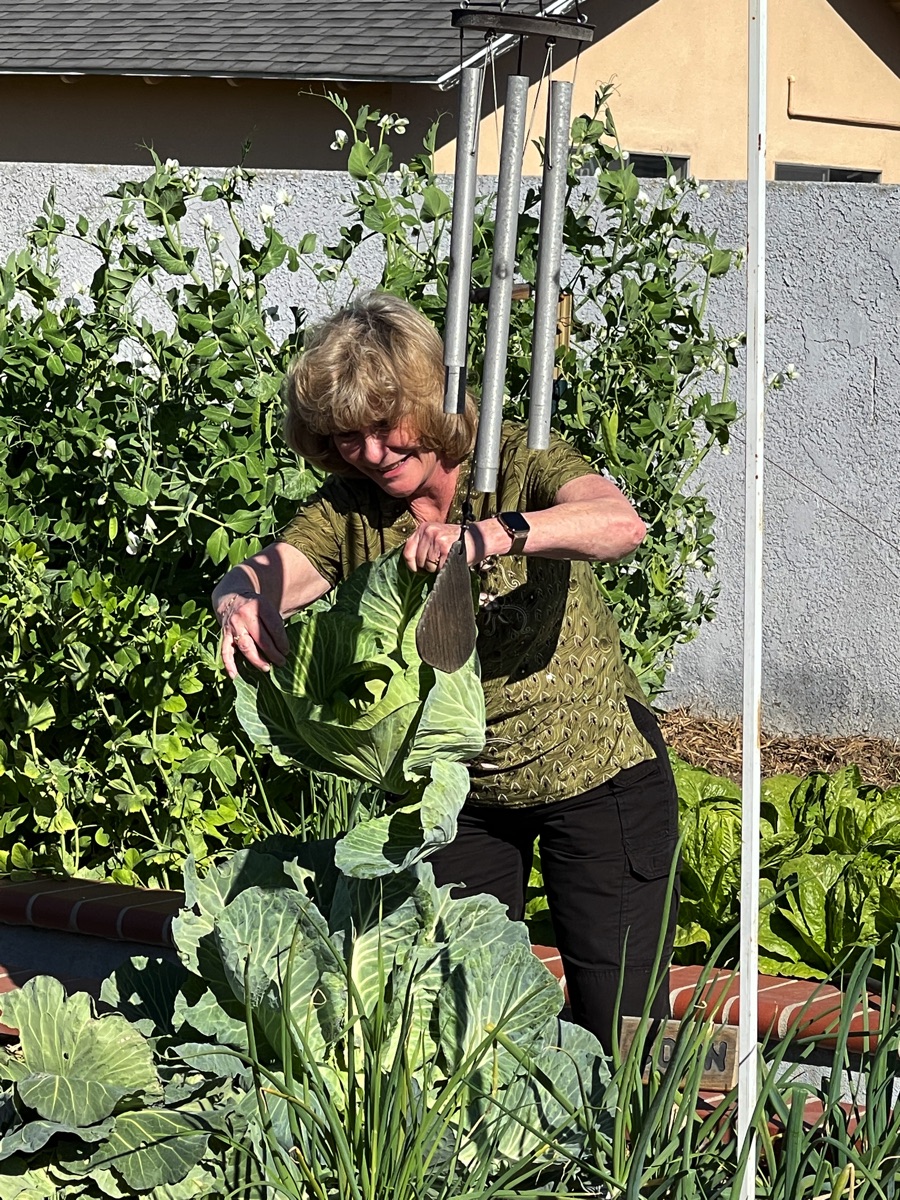 Mary found the cabbage for the corned beef and cabbage dinner for Del and his family!

Scout, of course, asked the question, “How come you get upset when I play in the dirt?”

Did you know that Scout is a train elephant dog?  Since he had been around the house, we have not seen a single elephant!  He does his job well! 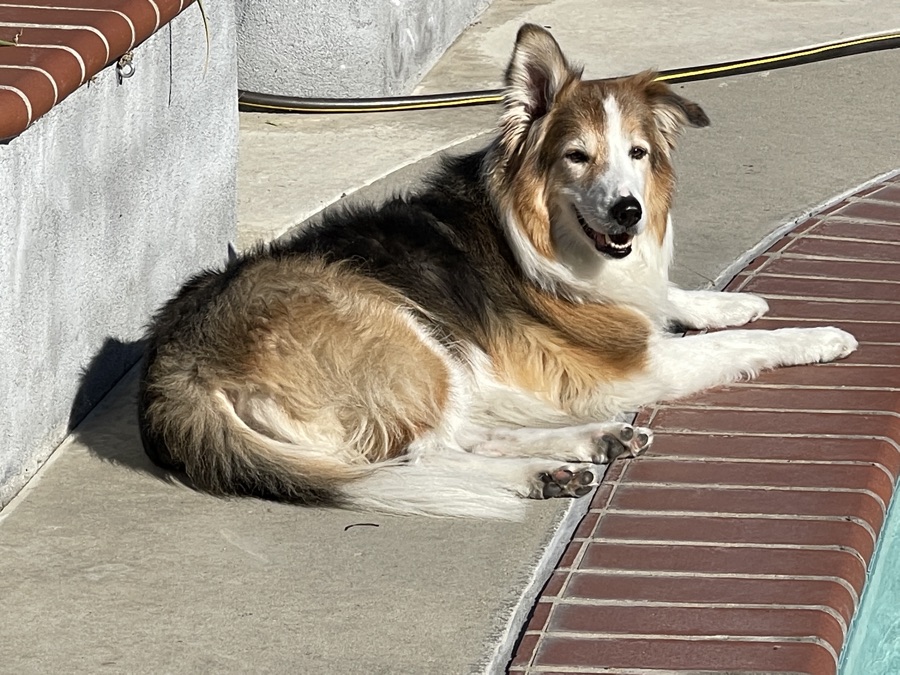 Scout supervised and kept an eye out for elephants!

Scout always asks me to read the Marmaduje comic to him.  He learns what not to do! 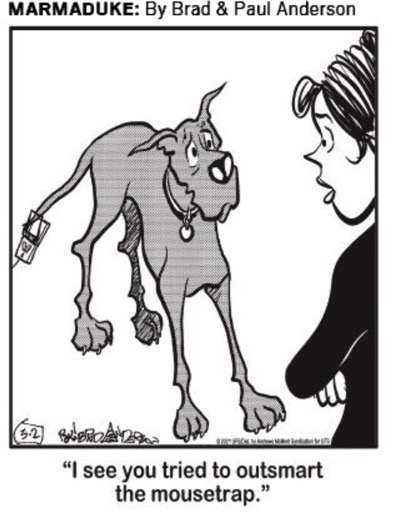 OK, back in the house, we slice and dice and pop the results into the InstantPot.  6 quarts is quite a bit and will feed four easily! 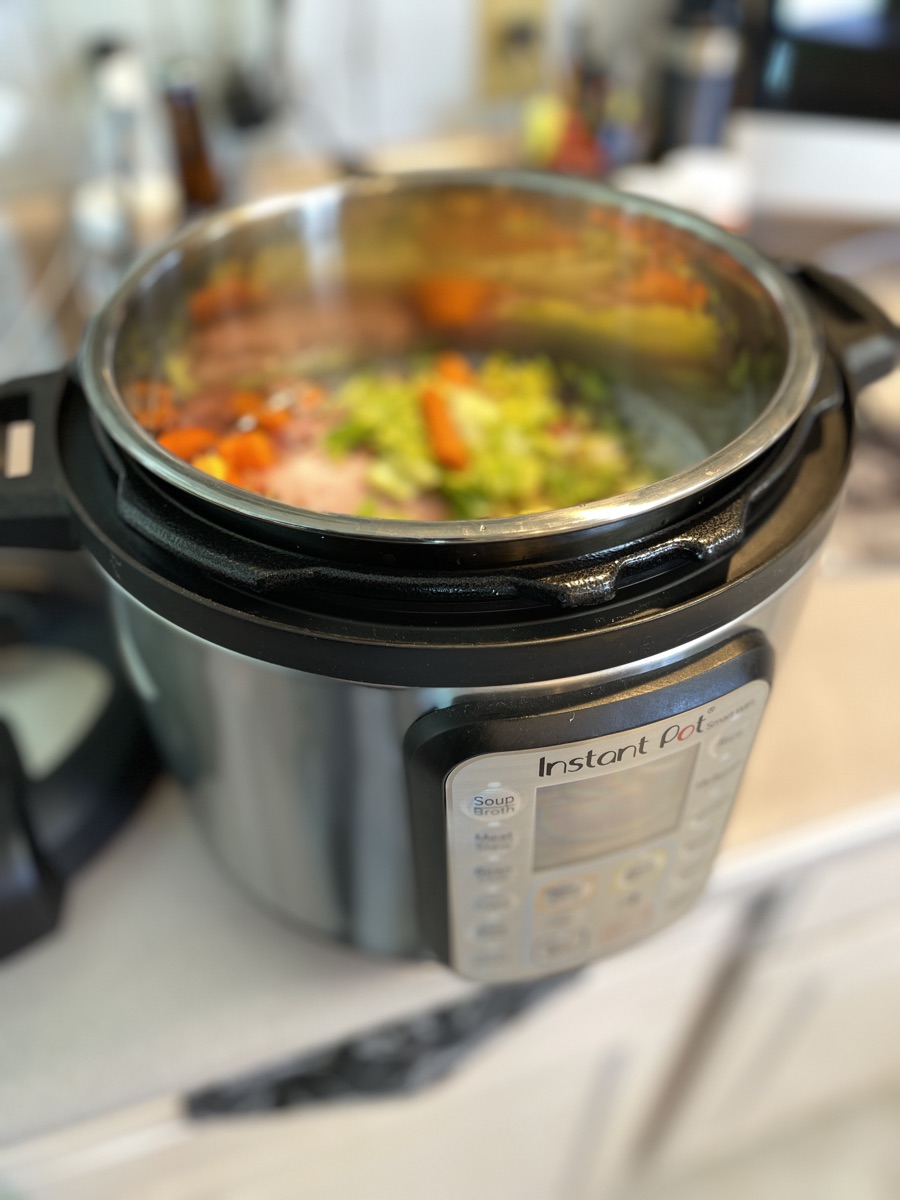 We tried my InstantPot

Everything looked good, so we closed up the pot, set it to high-pressure cooking; the timer was adjusted for 75 minutes, and Mary ran out the door awaiting the massive explosion.  Nothing happened, the timer went off, and we opened up the pot, and it was completely done and tender as could be!

This was for Vicky, next door, as Del is having some serious medical issues and is hospitalized. 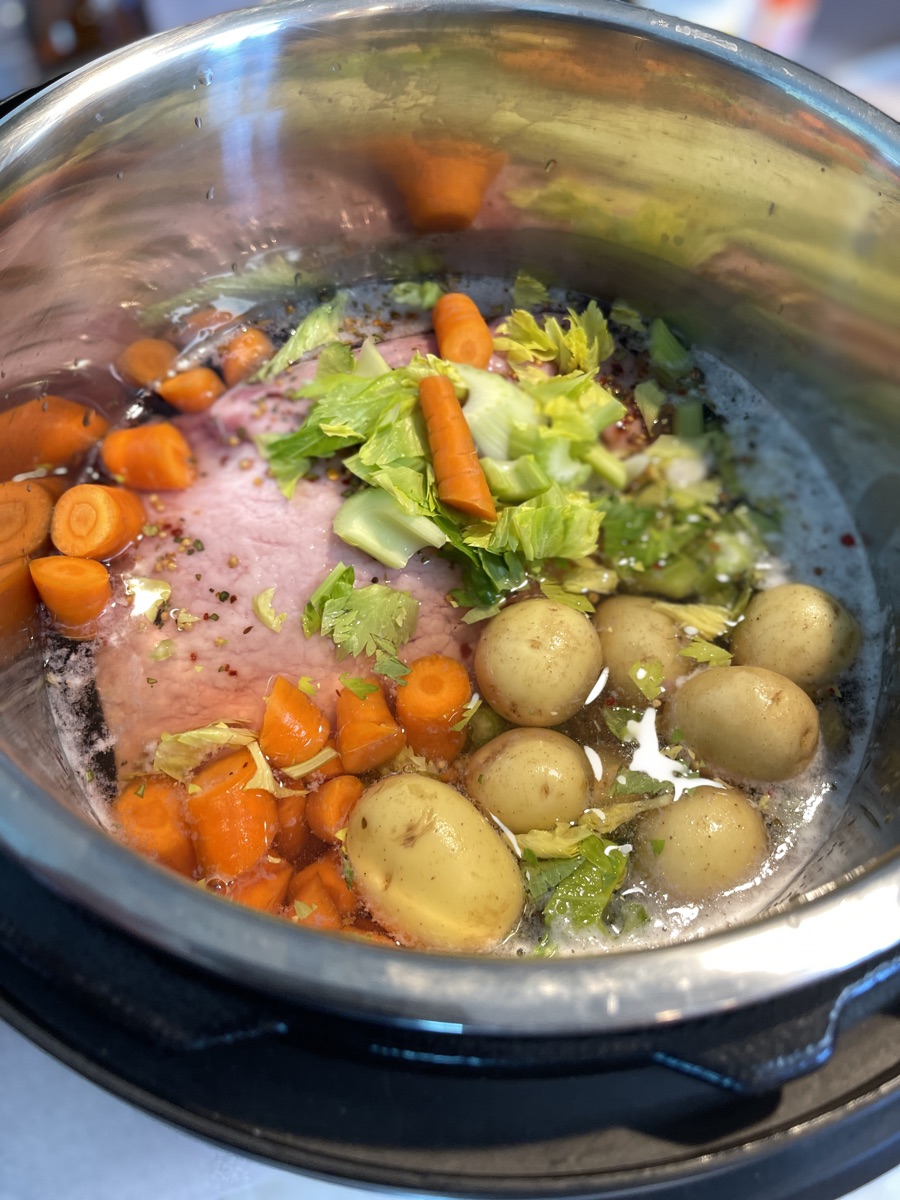 It all fits into the 6-quart pot!

We put it on a platter and took it next door, but they were at the medical facilities.  Later in the evening, Vicky thanked us but said to keep it at our place since she was falling into bed.  The situation has put a big strain on Vicky and the family.  They are such lovely people! 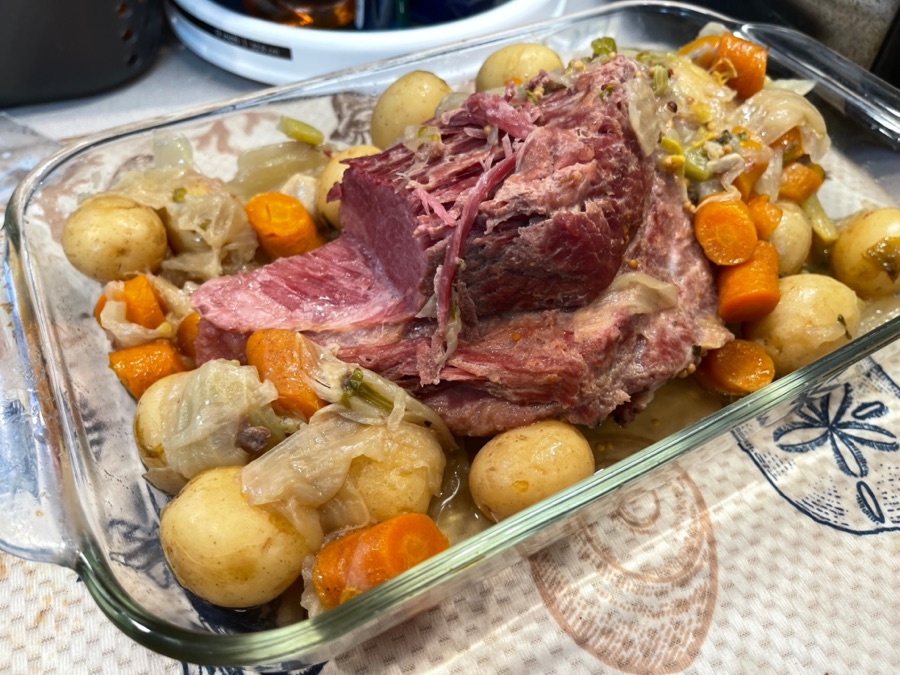 Well, the kitchen was already a mess, so Mary decided stir-fry was in order.  I found a couple of Wok’s, and I assisted her in prep for a little while before I had to hit the showers.

This evening I had a Sewer District Board meeting at 7:00 PM.  While I was in the shower, Mary worked magic in the kitchen.  Dinner was OUTSTANDING!!! 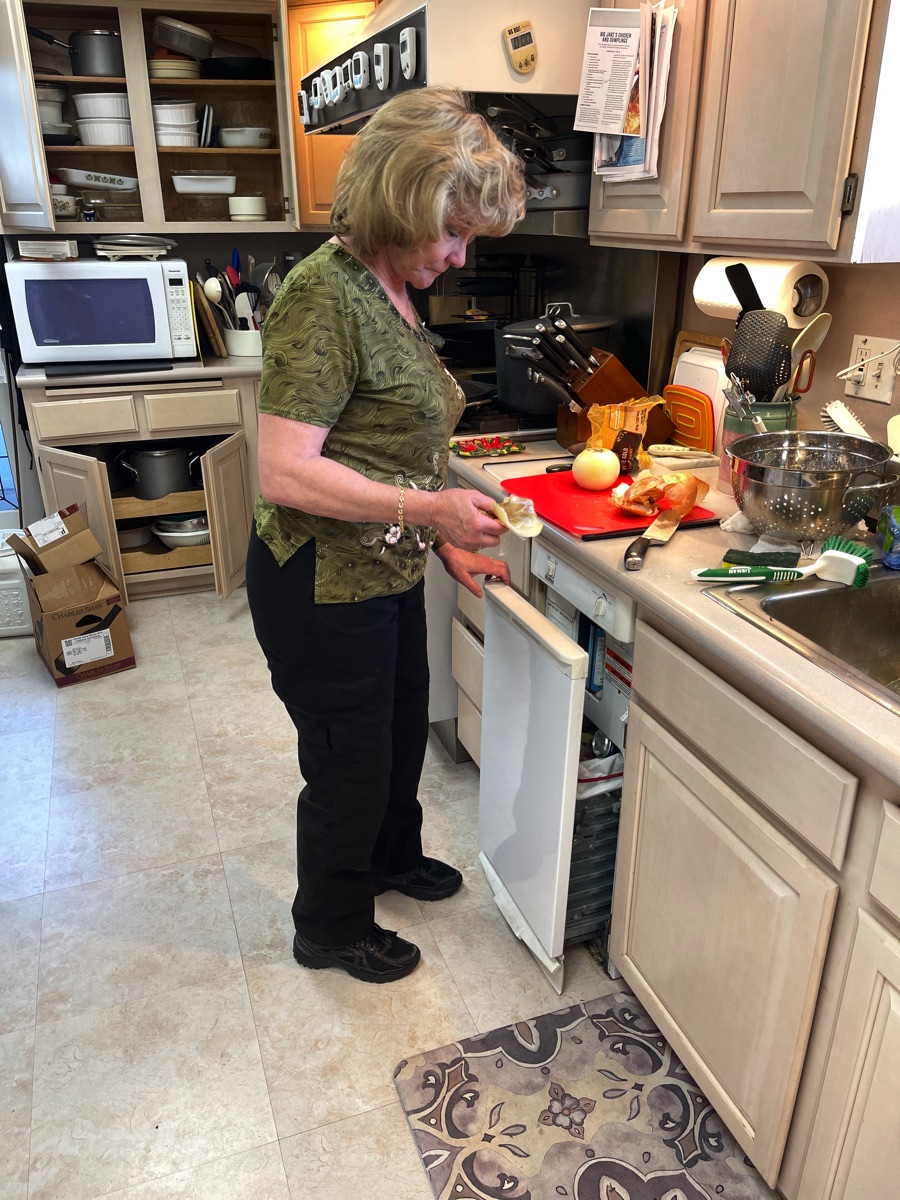 Mary gets to slice and dice while I get cleaned up!

I pulled the onions, and Mary chops them for the stir fry.  She is quite amazing.  Not only an eye surgeon but a first-class cook!

I am tickled that she had adapted to my kitchen so well.  We have a stack of recipes about two inches tall that we want to try! 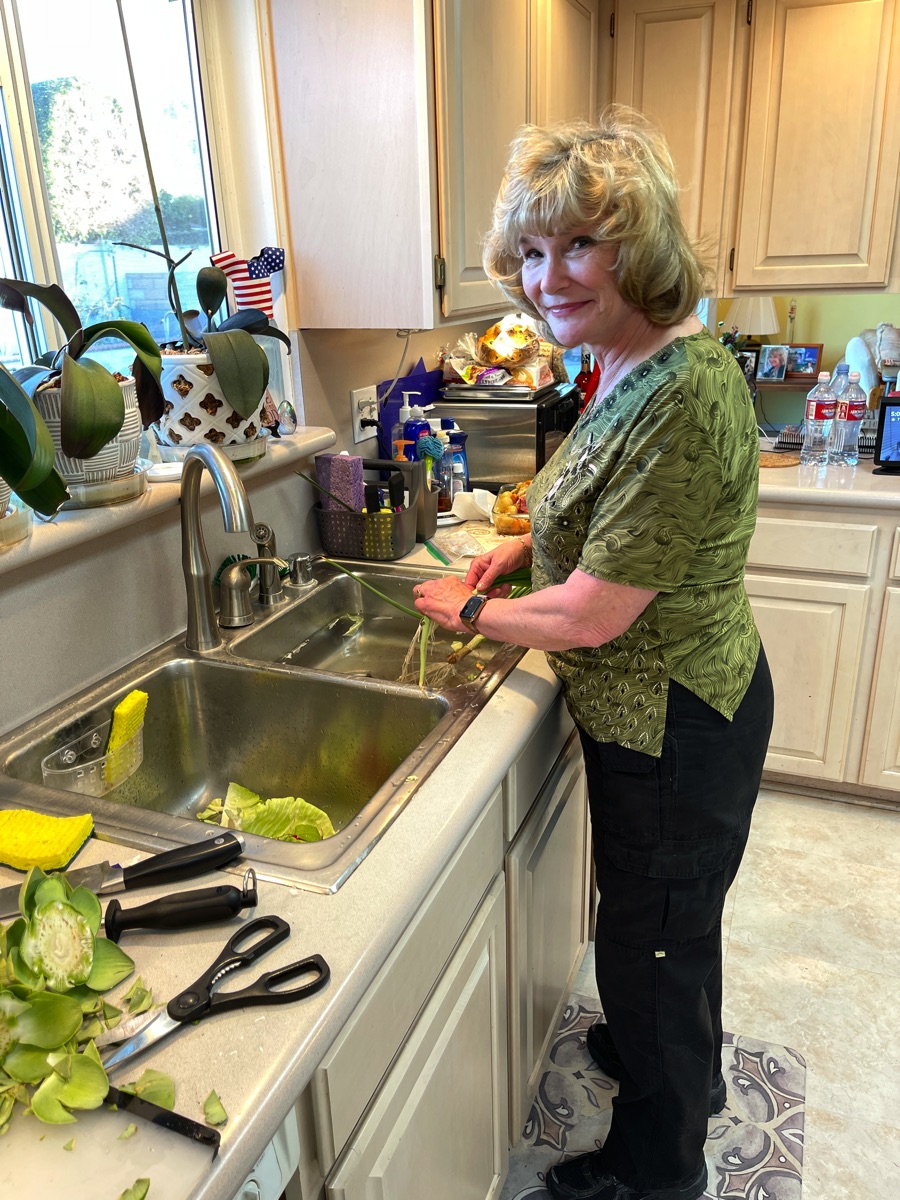 She is a good slicer and dicer!

The two of us made quite a mess in the kitchen, but we were trying new things, so it was quite ok! 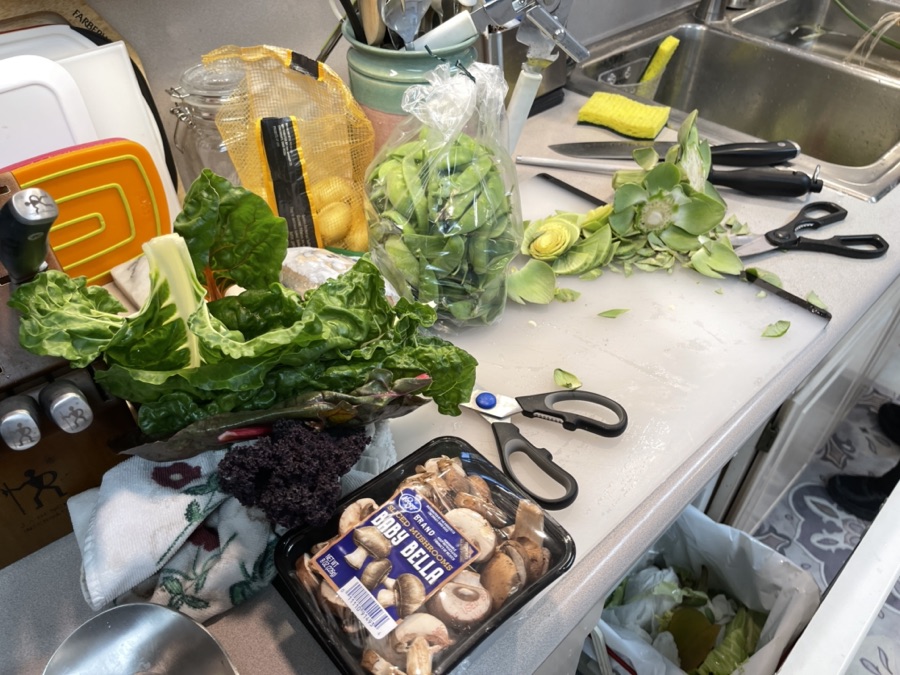 You see a stir-fry kit!

What would dinner be without artichokes?  We did them in the pressure cooker for 13 minutes which is better than the 45 minutes in boiling water. 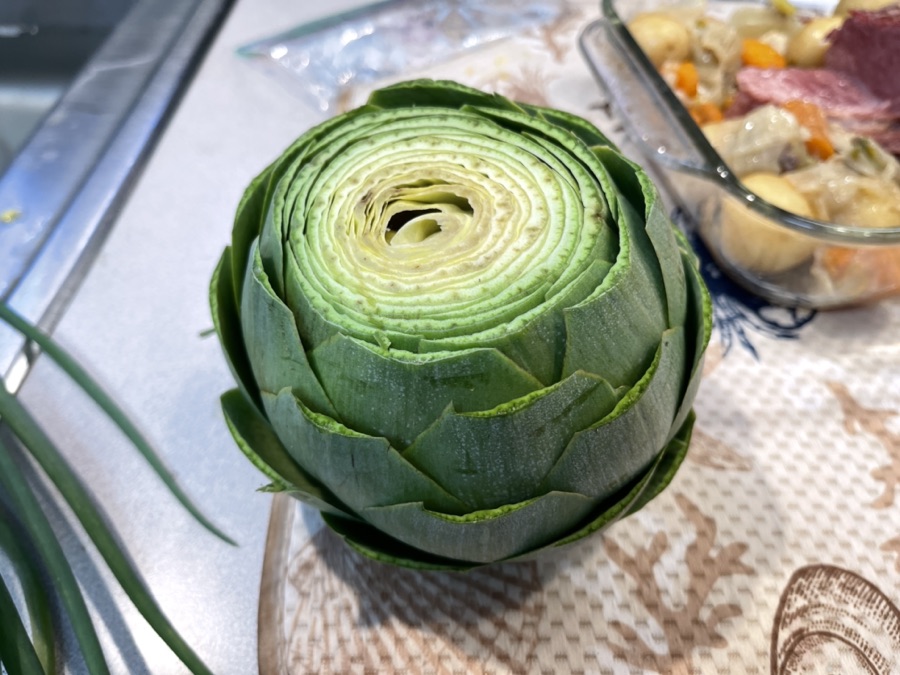 One success means we needed another!

I have often wondered who was the first person to realize that eating an artichoke was a good idea.

We watched YouTube videos to see how it should be done, and we got all sorts of variations.  We decided a parmesan cheese rub with some other magic ingredients, courtesy of Mary, would be just fine! 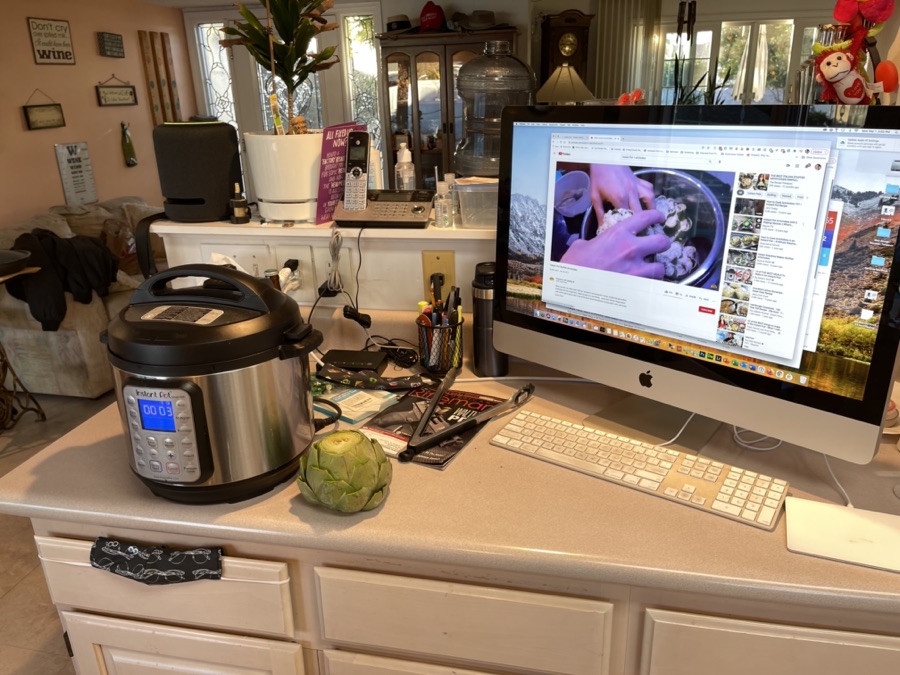 We called Colleen and shared our activities.

She stuffed the leaves with the paste of magic ingredients, and we were on our way! 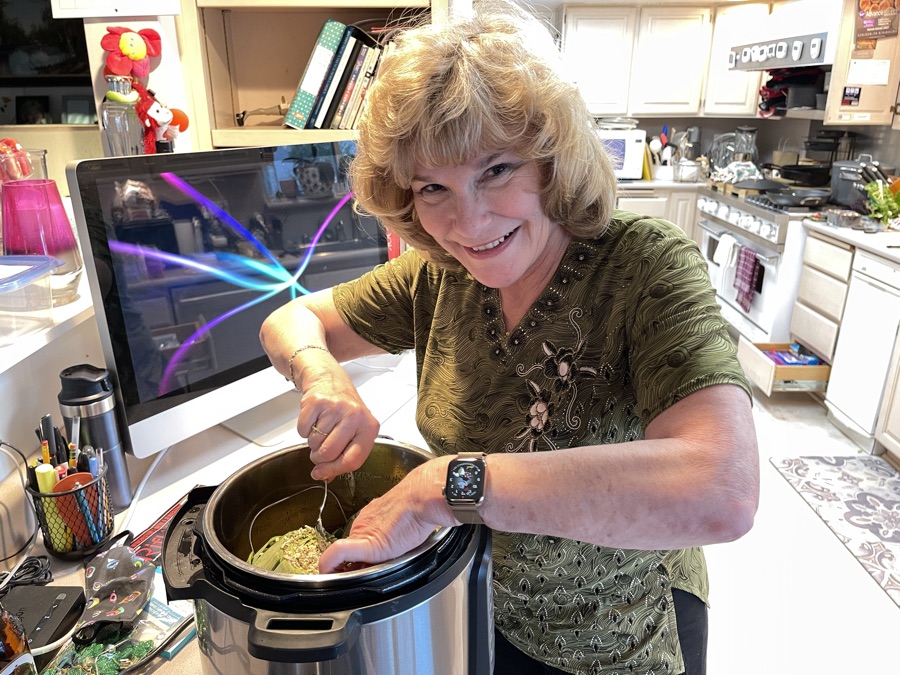 We also tried throwing a sliced lemon into the pot and being adventurous cooks; we did not change the corned beef juices that were remaining in the pot; we just threw the artichokes into the pot without a change in liquid!  What’s the worse that can happen? 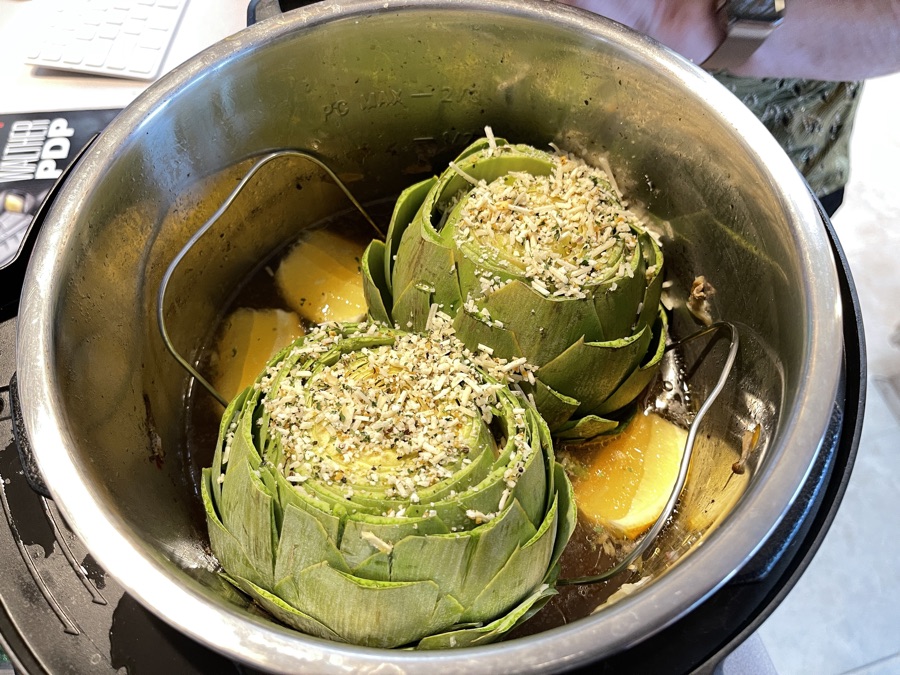 I tried something new, parmesan cheese on the artichoke!

I went to the board meeting about eight minutes door-to-door and watched Mary via my security cameras.  She had the kitchen spotless after I returned.  I was gone about 30 minutes total. 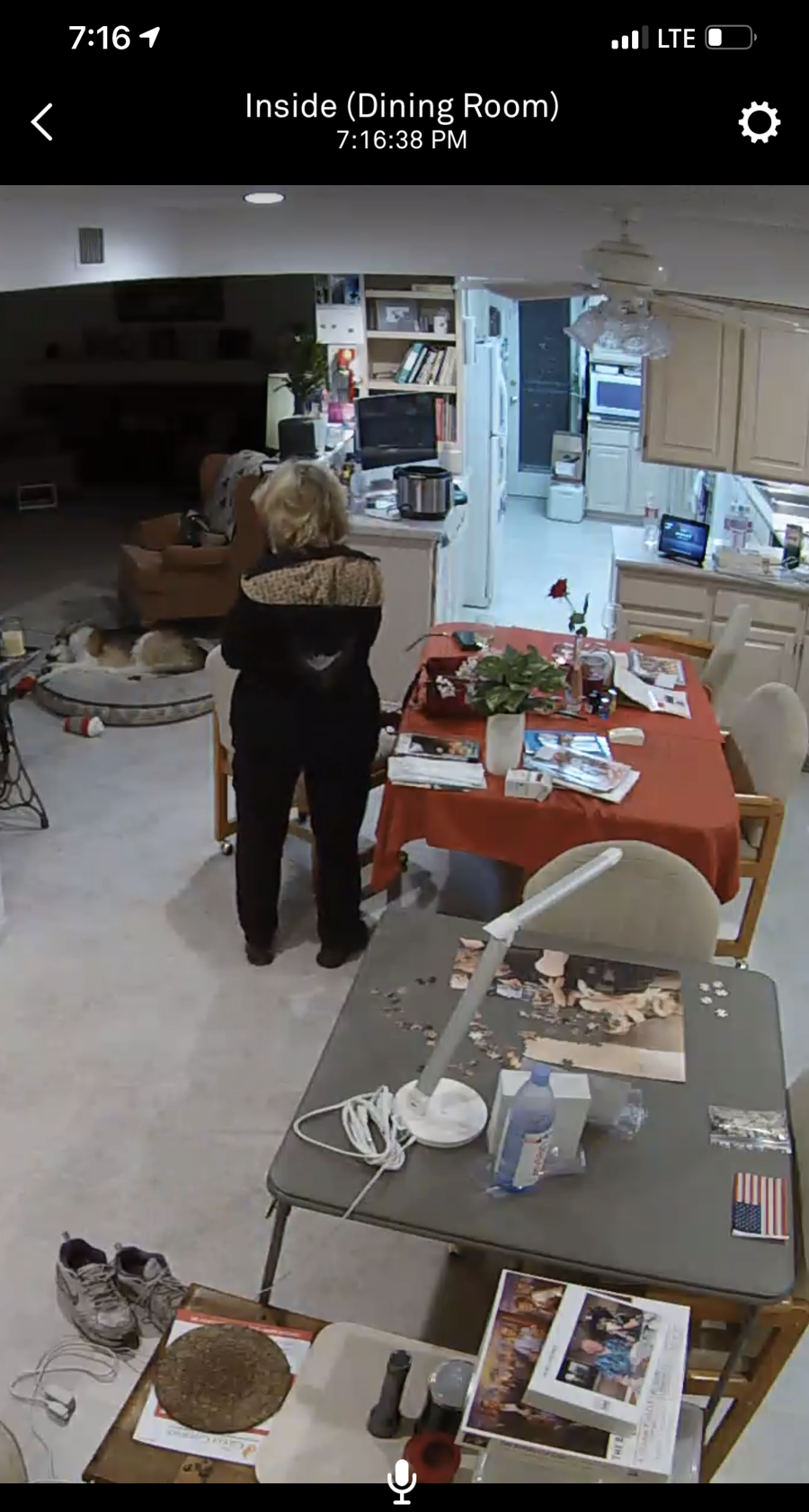 I had a board meeting and watched Mary as she worked in the kitchen while I was gone!

We watched the remainder of Two And A Half Men and then a Clint Eastwood movie before crashing. We had a wonderful day just being together and messing around the house.

Just an old retired guy trying to finish out my last years on this planet. I lost my best friend and wife in early 2020. I was blessed again by reconnecting with Dr. Mary Côté, a long-time friend. Mary and I got married July 28th, 2021, and are enjoying life together and plan to spend the rest of our lives being a blessing to our friends and family.
View all posts by Paul →
This entry was posted in Cooking, Food and Wine, Gardening, Just Us, Working Around House. Bookmark the permalink.