Mary’s Day Two Of Retirement And We Worked!

“Retirement: It’s nice to get out of the rat race, but you have to learn to get along with less cheese.”

Today we attack the office, well, Mary’s office at home.  The poor baby office was overloaded during Christmas! You know, everything you need to put up somewhere while Christmas is on display has to go somewhere.  At Mary’s, everything went into the office. If it were Halloween, the office could go trick-or-treating as an overstuffed storage unit.

It was early in the day, and all of a sudden, I had a thought, always a dangerous thing to have: “If at first, you don’t succeed, skydiving is not for you.”

We talked a little about being retired, and Mary always had a good story about her patients.

We worked for six hours, and we were about 50% complete in our de-clutter process.  We were slowed by the fact Mary had to go through files and see what she must keep and what needs to go.

We decided she would attack her file cabinet tomorrow.  I sensed that the file cabinet needed a serious look since the top drawer was full of stone tablets.  After opening the second drawer and seeing all the bats fly out, I decided a smart move was to let Mary go through the file cabinet while I watched, from a distance. 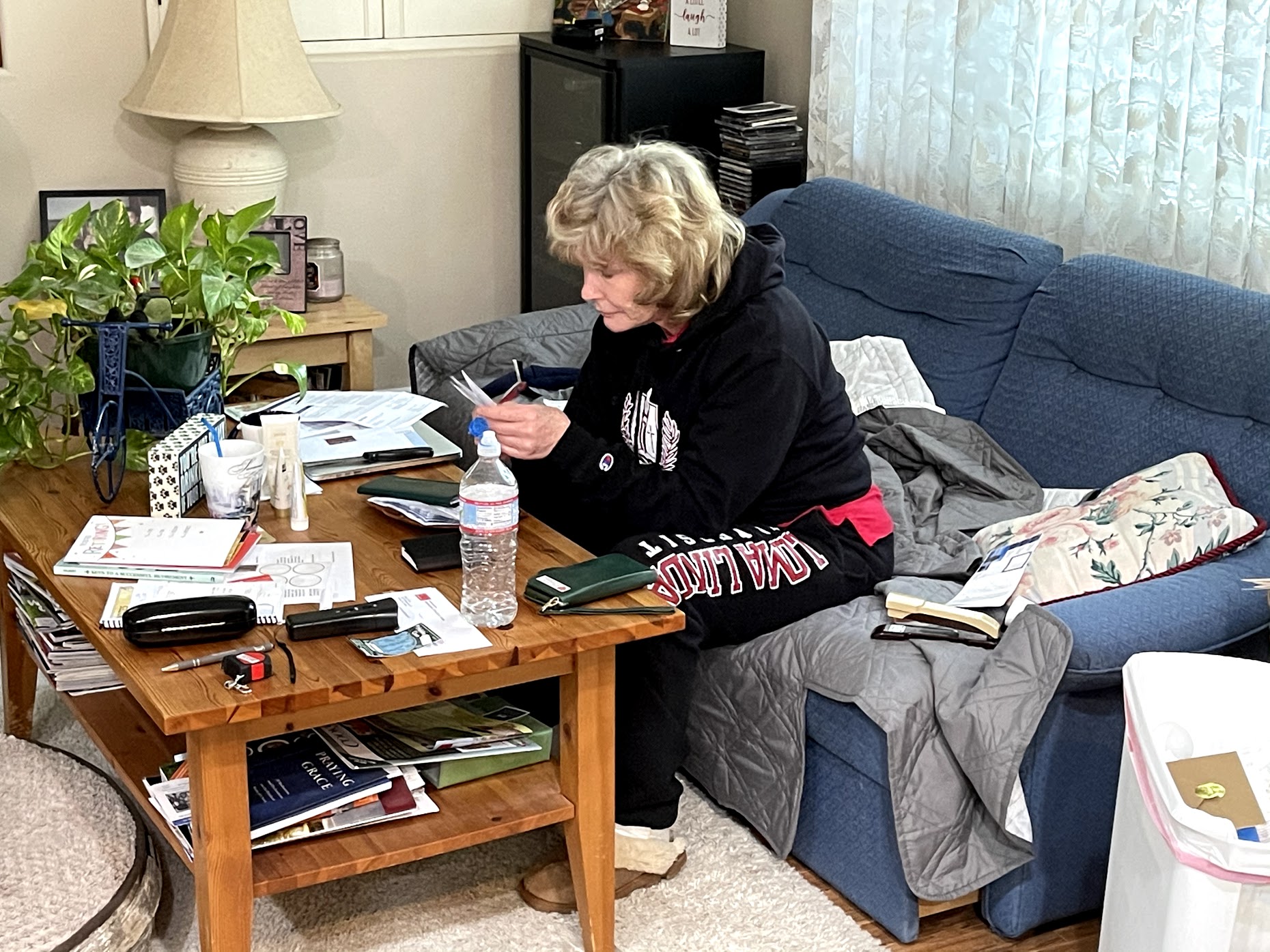 Mary worked hard going through the bills and tossing things out.

After declaring the morning’s work done, we decided to have lentil soup for dinner, so I volunteered to go to the market, get the ingredients needed to make the soup.  When I  said, “We Decided,” I had this vision of Mary assisting me.

Alas, she was so dedicated to the office cleanup that she made me cook up the soup by my lonesome.  I chopped, sliced, diced, measured, poured, and otherwise put everything together over about a thirty-minute period. My cooking is fabulous; even the smoke alarm is cheering me on.  While I was slaving away, I heard Mary sounding like guys watching a football game! 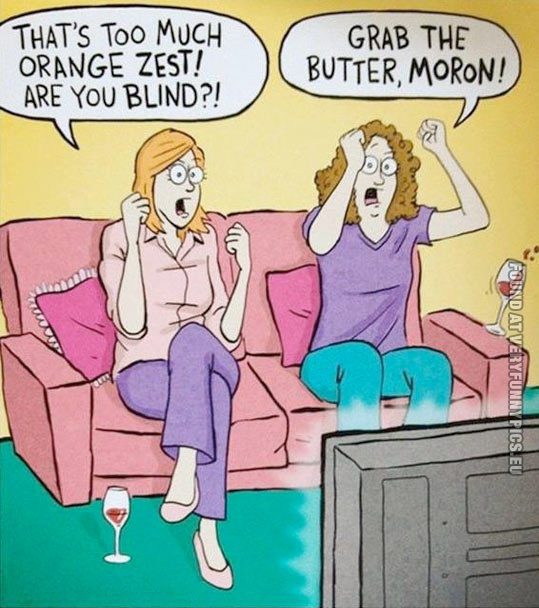 I was being watched!

I asked Mary what she thought of a guy who cooks, and she said, “A guy who knows how to cook is really handsome.” She is a smart lady!

We called Colleen on the Bat Phone and talked to her for quite a while.  All is well on the east coast.

Mary reminded me, “Many people have eaten in this kitchen & have gone on to lead normal healthy lives.”  I felt some sense of relief!

I told Mary of my friend, Greg, who I took to dinner at a fancy restaurant many years back.  My friend Greg sat down at the table and looked at the menu. He told the waiter, “I think I will have the turtle soup.”  The waiter leaves, but Greg changed his mind and wanted pea soup instead. Greg yelled at the top of his lungs to the waiter, “Hold the turtle; make it pea!”  We are no longer are allowed in that restaurant. 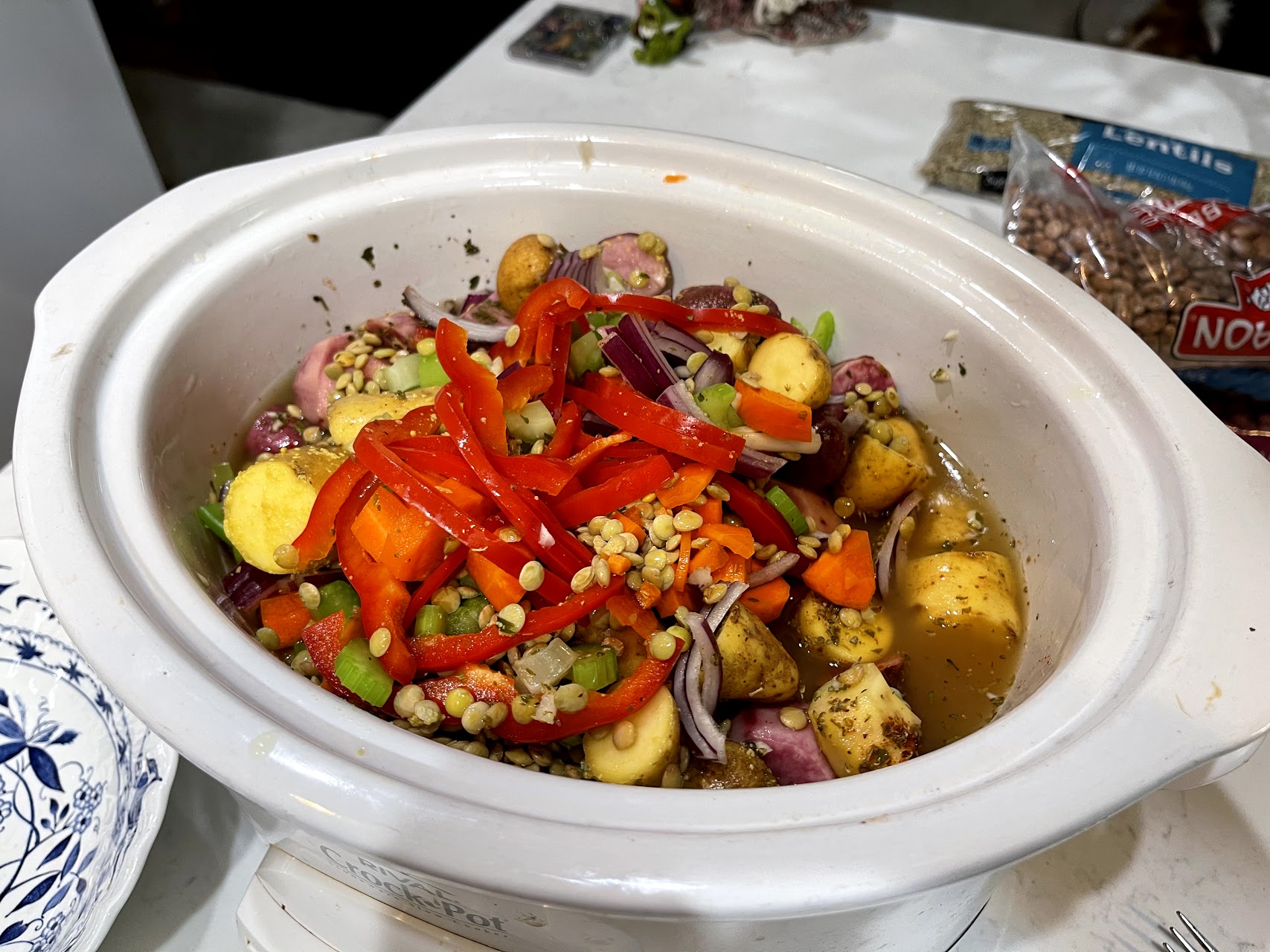 Most of the ingredients are in, and I made the stock from concentrate.

We took Scout for a walk around 6:30 PM.  He has a gentle way of reminding us of his needs.  Dogs are that way, you know!

When we got home, Mary tried my soup.  One taste, and she ran, screaming upstairs, yelling mild obscenities in several languages, all at once.  She returned a few minutes later, her composure collected, and described the soup.  None of the descriptions were, let’s say, a compliment!  I think the reference to “boiled inner tubes” was the most hurtful!

I called the poison control unit of the local hospital.  They were on alert in case any more symptoms show up! We decided the soup needed another hour to simmer. A decision was made to have some salad and ribs for dinner and save the “soup” for post-movie munchies and if it were not better, use it to fill the cracks in the sidewalk out front.

I remembered my mother used to feed me alphabet soup when I was a kid. She insisted I tell everyone that I loved it. I didn’t really; she was putting words in my mouth! 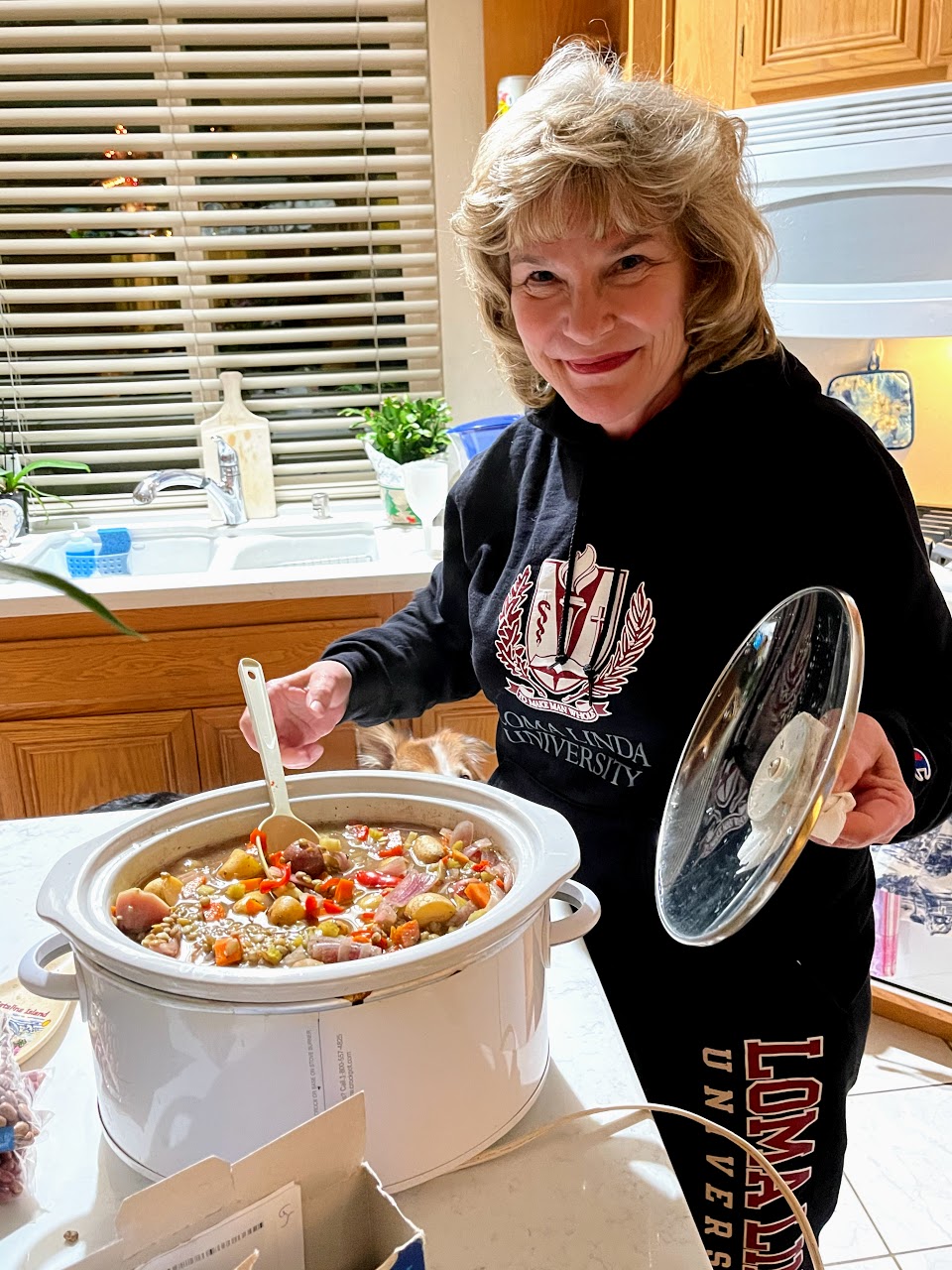 “OK, perhaps I overstated Mary’s reaction to the soup!”

The salad from our garden and bones (beef ribs) were fantastic.  The gnawing sounds could be heard for blocks around.  Dogs began to bark and howl; they knew there would be bones leftover!

It was time for the soup! Mary came into the kitchen; Mary saw the soup. Mary tasted the soup; Mary decided to order take out!  I was crushed!  Hours of hard labor I poured into that soup, and she had rather have McDonald’s?

The soup actually passed muster after some selected spices were added.  I turned on the fireplace, brought over the soup in two ceramic oven-proof dishes and stainless steel heavy-duty spoons, and switched on the news.  The news was horrible, making even my soup taste, OK.  We decided that test patterns were far better to watch! 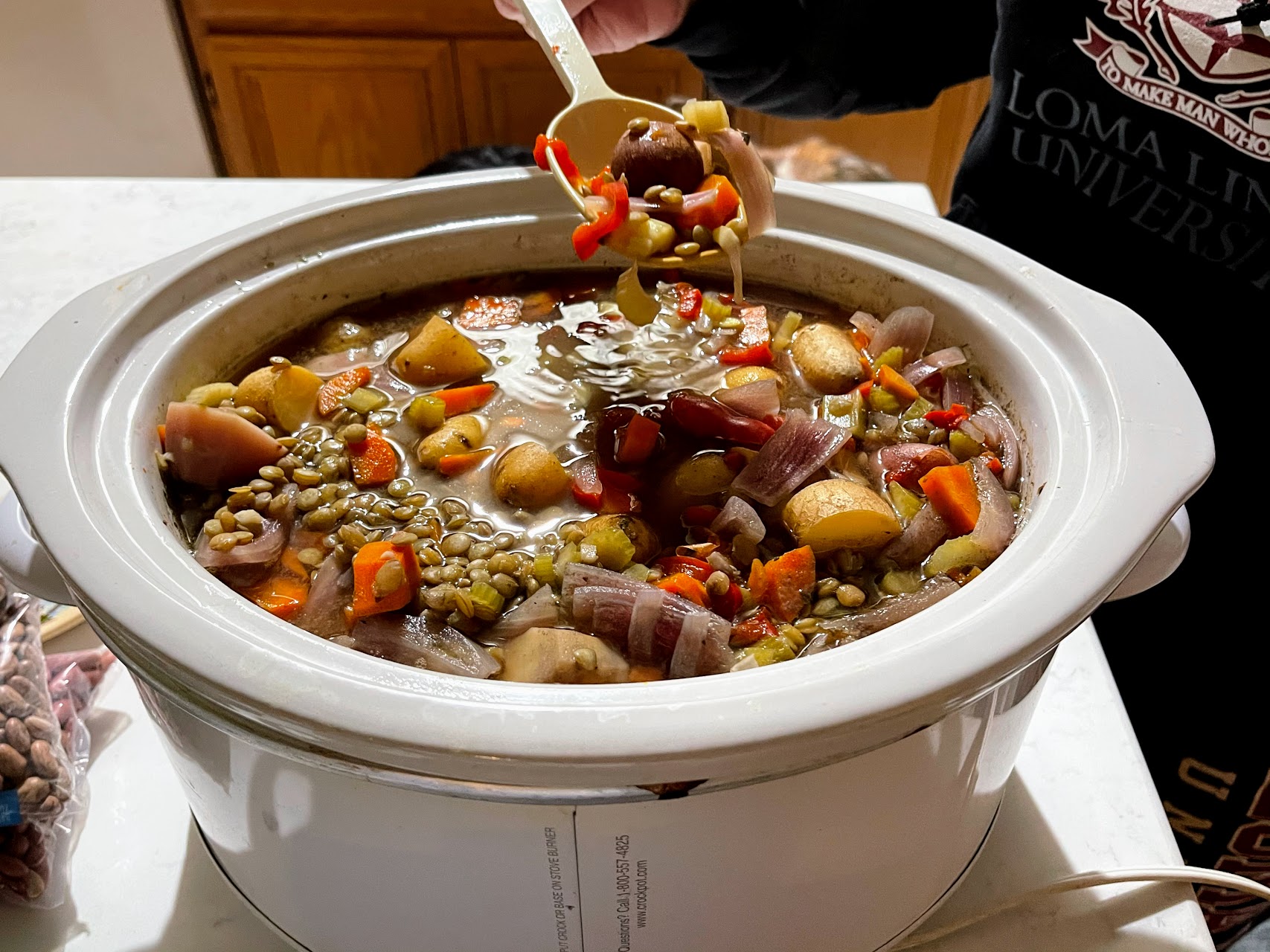 Actually, it turned out well!!!

Mary added some road-kill to the soup pot for protein.  Roadkill, this evening, was chicken. A day earlier, and it would have been opossum!

We called Robin on the Bat Phone to check-in and make sure all was well.  We told her about our dinner, and we plan to save some for her.

I was pooped this evening for some unknown reason, probably from watching Mary work so hard in the office.  We watched “The Bishops Wife,” the old 1948 B&W movie, before hitting the sack!

At 11:00 PM, we called Jan and told her of “The Great Soup Adventure.”  She was amazed we got away with our lives.  Jan reminded us, “Soup is never hot enough if the waiter can keep his thumb in it!”

11:00 PM?  OMG, it was late, so I headed to Seal Beach, leaving Mary to watch the soup making sure it does not get out of the frig and attack the neighbors.

Mary’s Day #2 of retirement has been declared successful!

Just an old retired guy trying to finish out my last years on this planet loving my best friend and wife, having fun, learning, and passing on helpful things to others.
View all posts by Paul →
This entry was posted in Cooking, Just Us, Working Around House. Bookmark the permalink.
Powered by Maribol IMDB Plugin