The old woman who lived in a shoe wasn’t the sole owner, there were strings attached.

This will be the first Thanksgiving without Mitch and Sue in thirty-plus years.  I decided to proceed with the celebration at home, not a Old Ranch.  Our dear friends joined in making it memorable and not nearly as tough as I had thought it would be.  The Duda’s, Zaitz, Branders. Chartier’s along with Greg and Irene made for a delightful and fun filled afternoon.  Mary was a most gracious hostess and we owe the success to Miss Robin who was FANTASTIC, as usual.

We met up with Robin at my house when she brought in the goodies from Polly’s.  I began to sing, “Hi Ho Hi Ho, It’s off to work we go!”  I knew I should stop when the first egg and second tomato came in my direction. 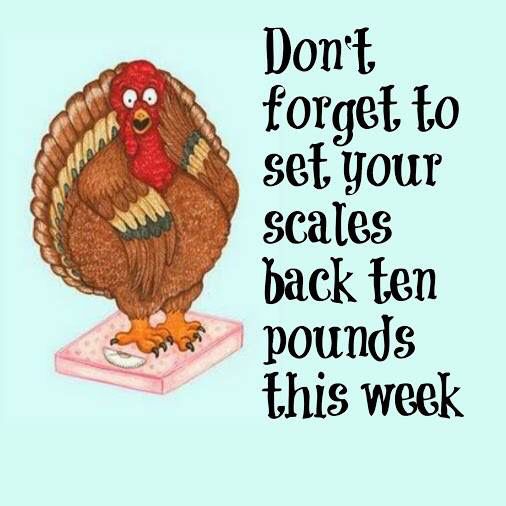 Mary and Robin worked together like a well oiled machine (there was a occasional clank and boing boing).   They somehow found all the cooking utensils and pots/pans/bowls needed.  Further, the clever devils they are, labeled everything with the “put it in the stove time” written on them, amazing!

With Coronavirus being a possible concern this year, what’s likely to be the most popular side dish? Masked potatoes.

Mary cut up the ham but she kept saying, “Hold still”.  I reminded her the ham was not alive. 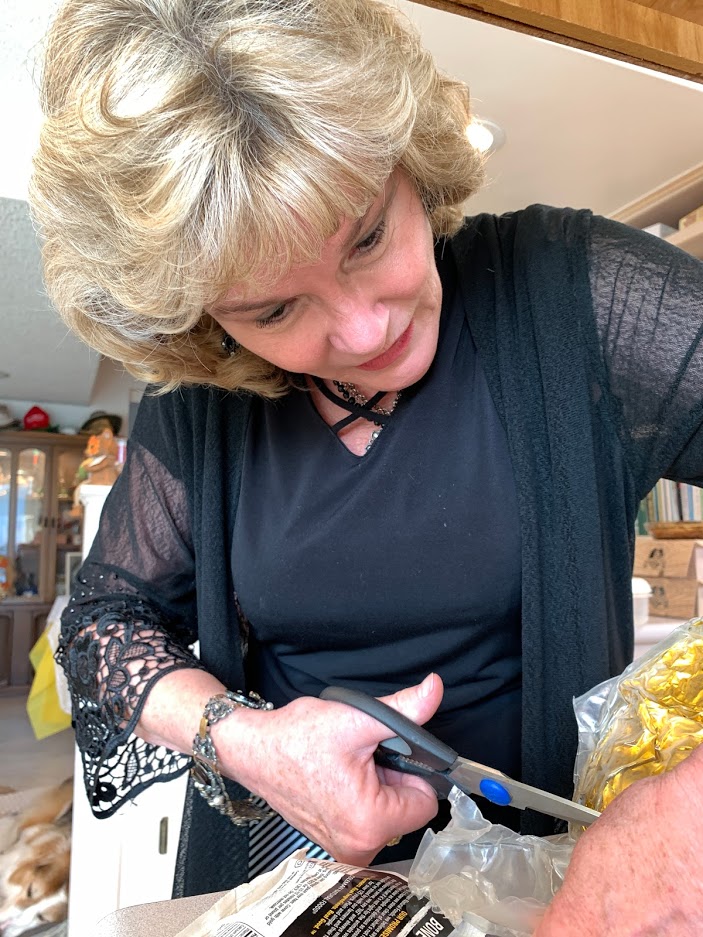 The kitchen was awash in activity.  Mitch and Sue would have been proud of the new team prepping for the 2:00 PM dinner time! It should have been videoed as the choreography was sensational.

I asked Mary why the Thanksgiving soup was so expensive and she responded with, “Silyl boy, it has 24 carrots”.

Scout watched the girls carefully looking for any tiny morsel of food dropping to the floor. When one did fall, we heard an “arf” followed by a “woof” followed by a blindingly fast POUNCE. 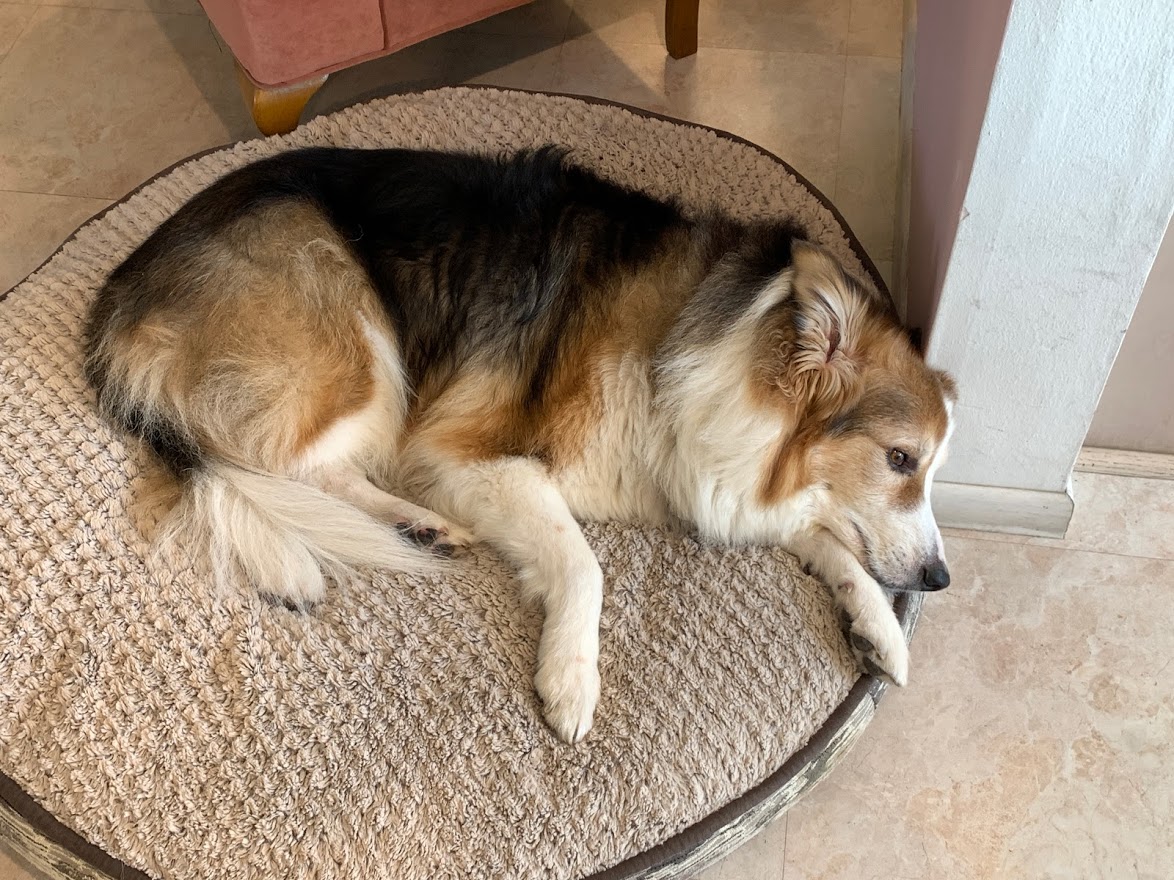 Adult supervision was available plus the floor was always clean!

Pete and Lisa came extra early because last year they had to stay home was the traffic condition along with a major accident would have made the trip three hours.

What sound does a turkey’s phone make? “Wing, wing.” 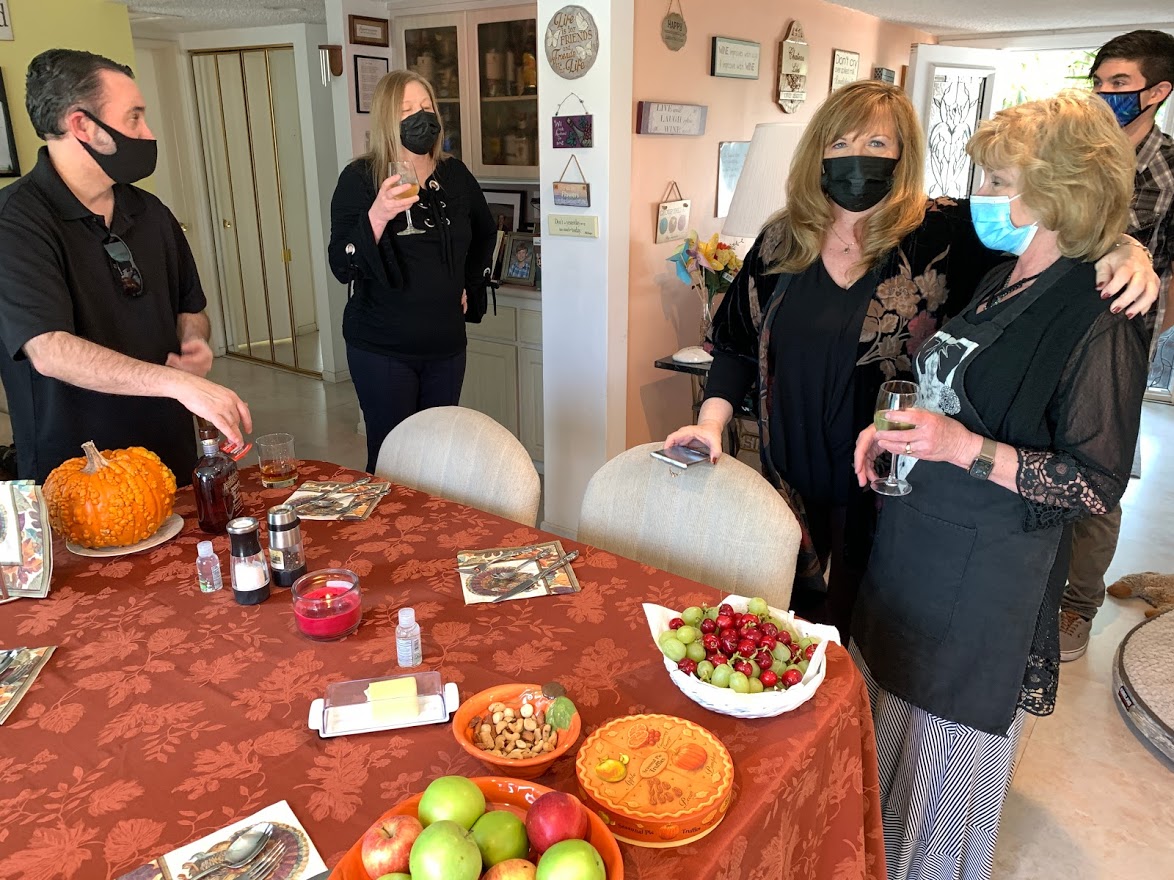 Bob and Nick came in about 12:30 PM and they brought more chairs and a card table so we could practice our social distancing.  BTW, when I sat down I was told to get up and sit in the back yard. What did I do? 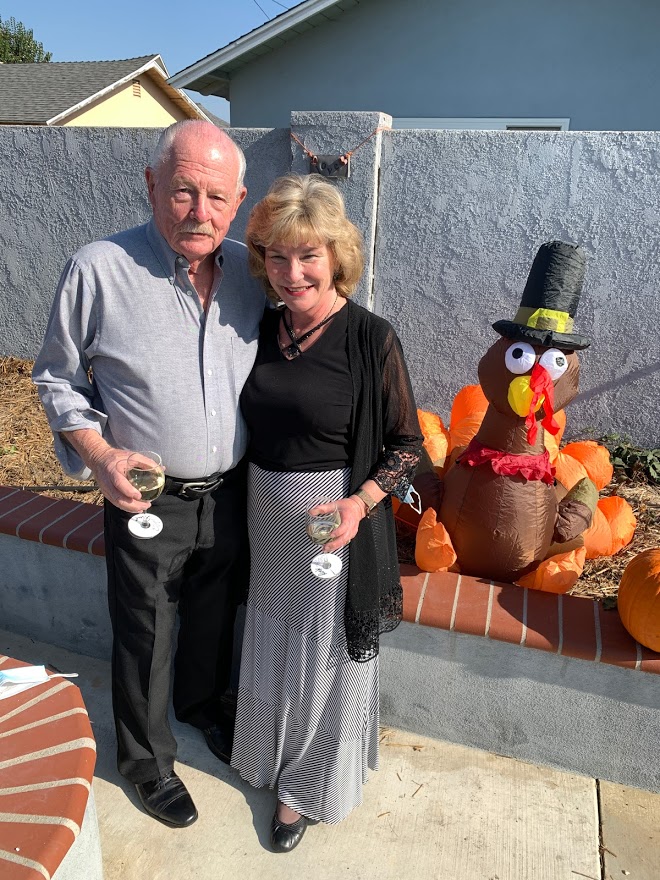 The front yard was also pressed into service to make sure plenty of fresh air was provided. We all laughed, giggled, and carried on until 1:30 PM and then things got serious.  Alarms sounded, Alexa was going crazy, oven doors were slamming, and the microwave was used to much it nearly caused an area-wide power outage. 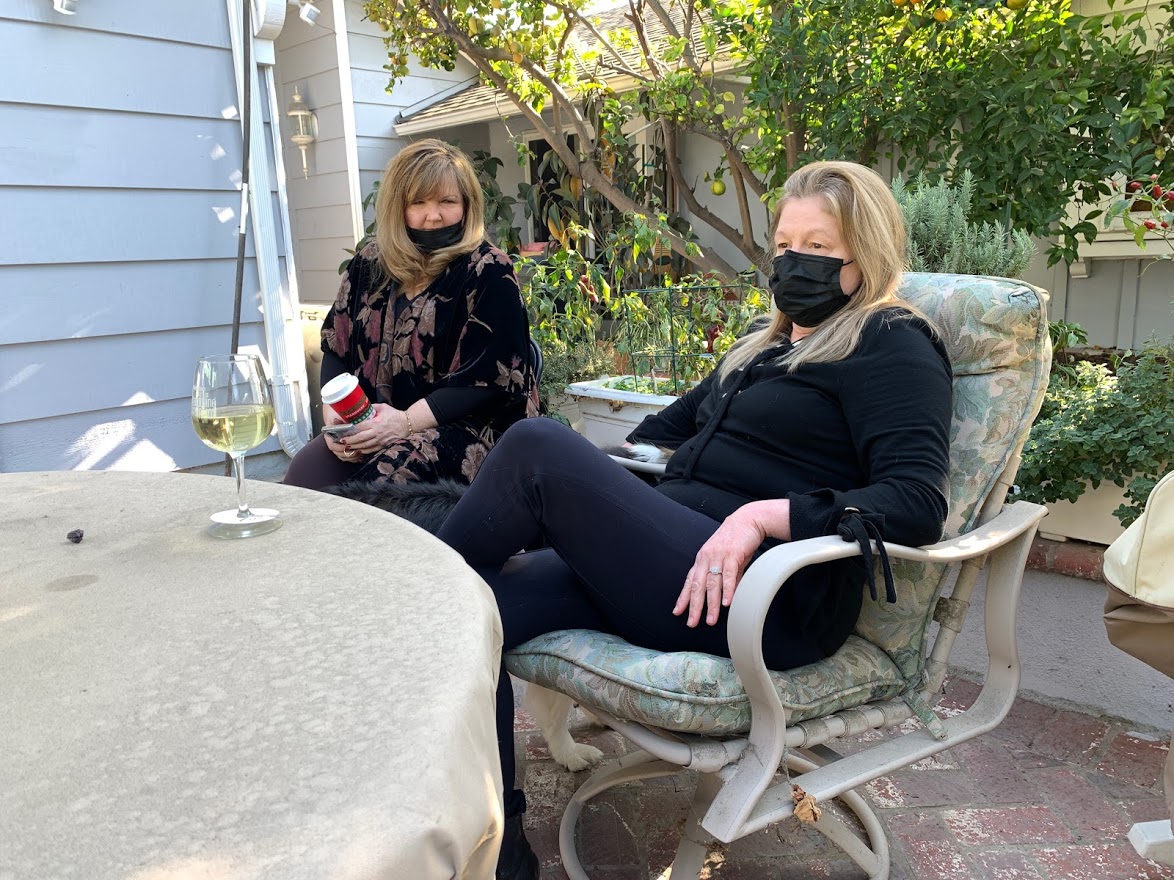 Everything came together at exactly 2:00 PM.  The serving line was formed and the girls has serving utensils at the ready!  Everyone was served and the rooms because silent except for the occasional utensil striking the plate. 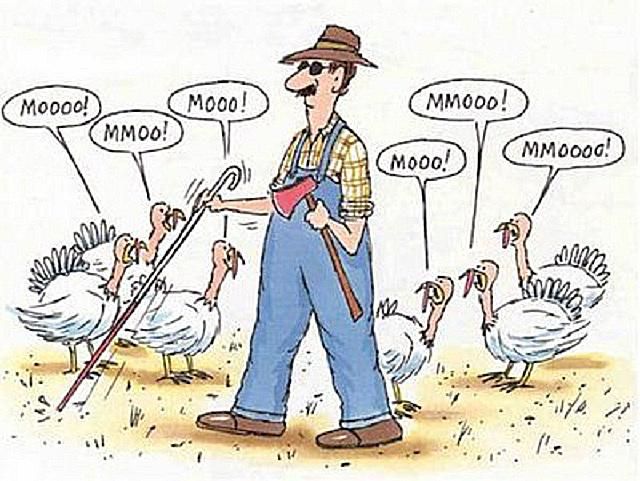 The tables were distanced quite nicely but we could still hear each other.  Mary and Robin served everybody as they passed by the kitchen. 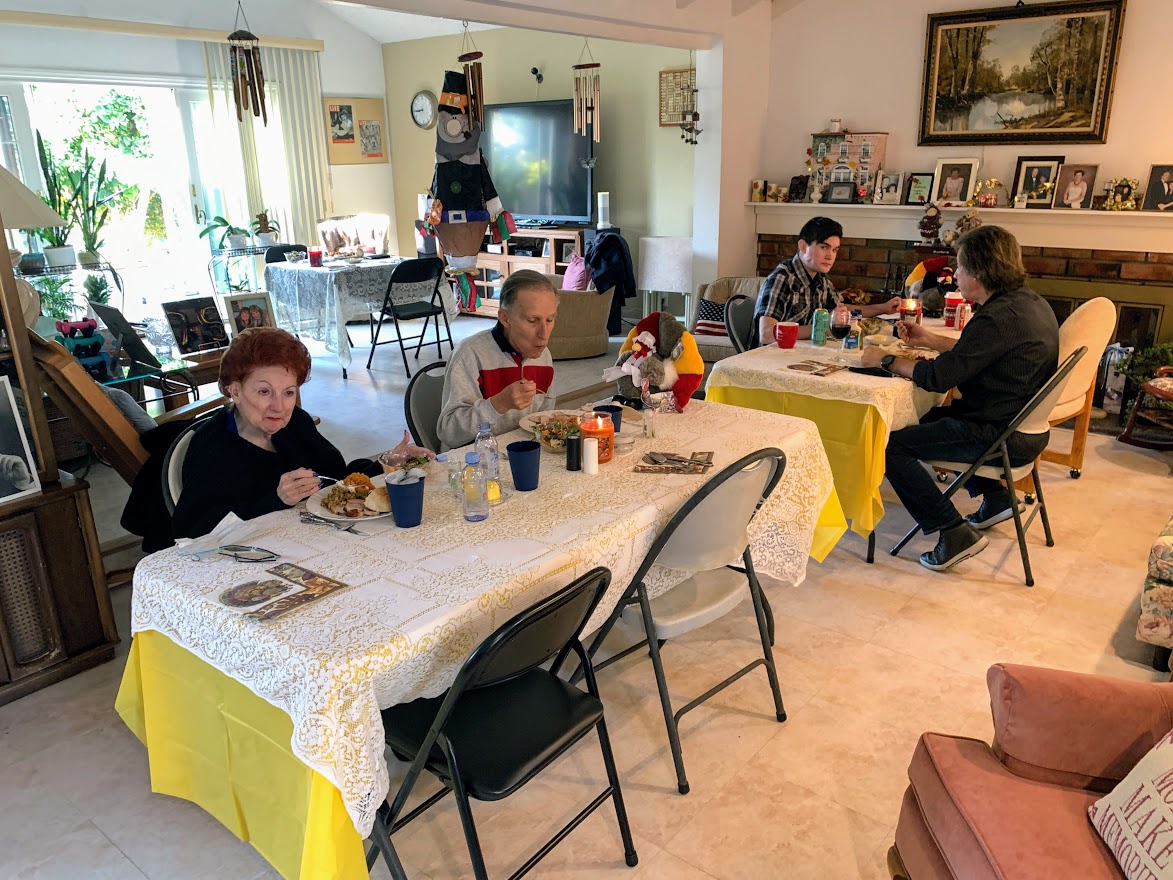 Dessert was served and we had Mary’s famous blackberry pie, apple pie, baklava from Irene, cheesecake from the Branders; it was a treasure of calorie bombs! 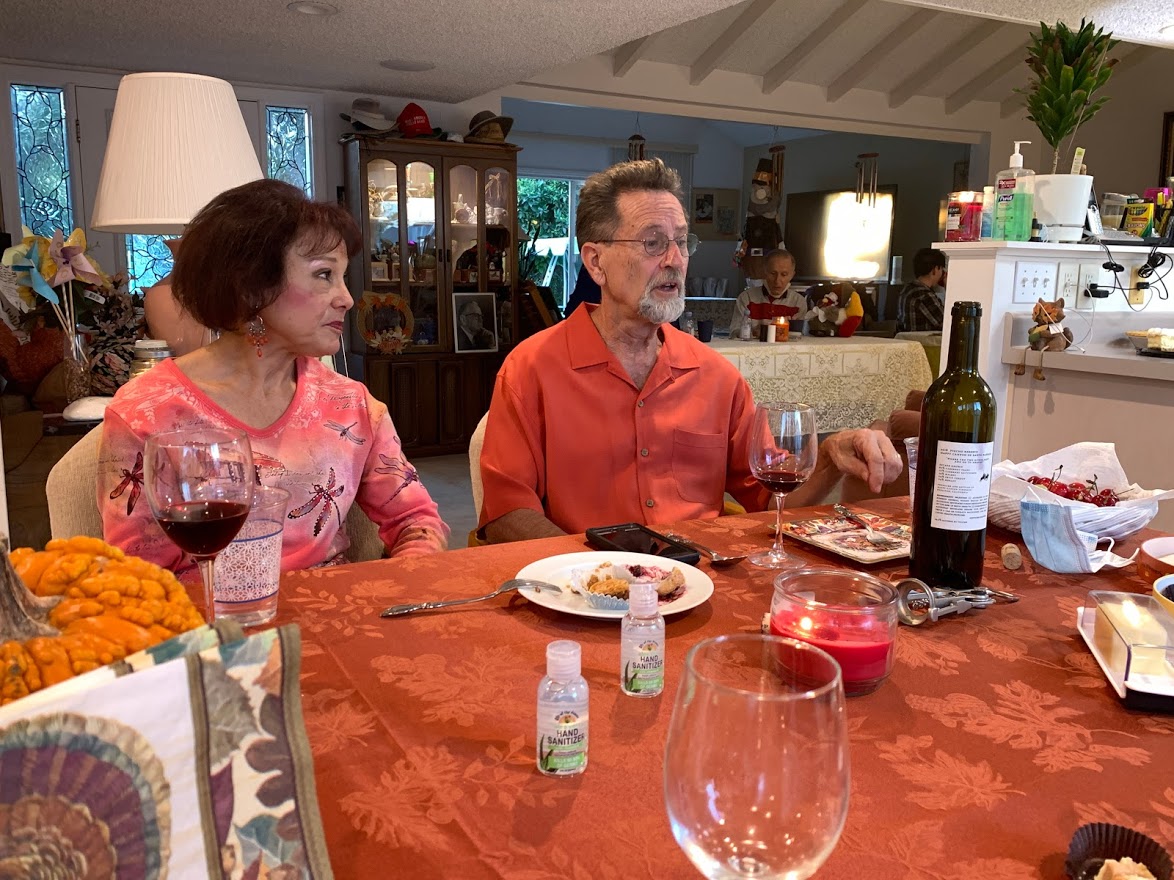 Then it was cleanup time.  I told Mary to stand-back, Team Lisa & Robin has this down pat!  Elbows were flying dishes were clanking and loud screams of joy flew out of the kitchen.  We heard an occasional, “Been there, done that!” The dishwasher was purring like a kitten and the left overs went to the highest bidders. 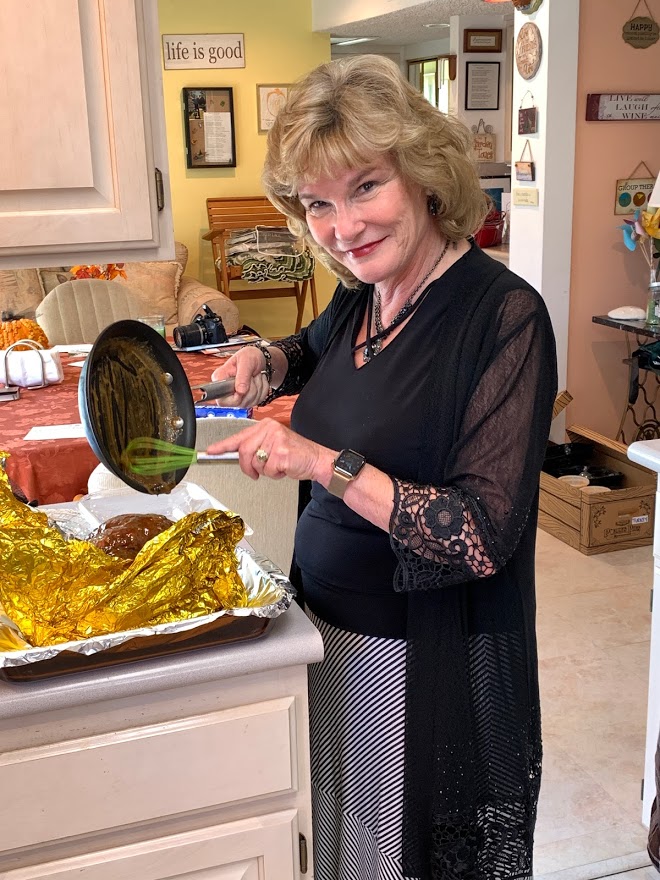 Cleanup gets underway! Mary could not resist.

And as if my magic, the tables disappeared, the food was packed and the house returned to its normal state.  Greg departed a little early was he has a Zoom meeting he sponsors to go to. Irene baclava disappeared.  I managed to save one piece of black berry pie which I will be thinking about this entire weekend. 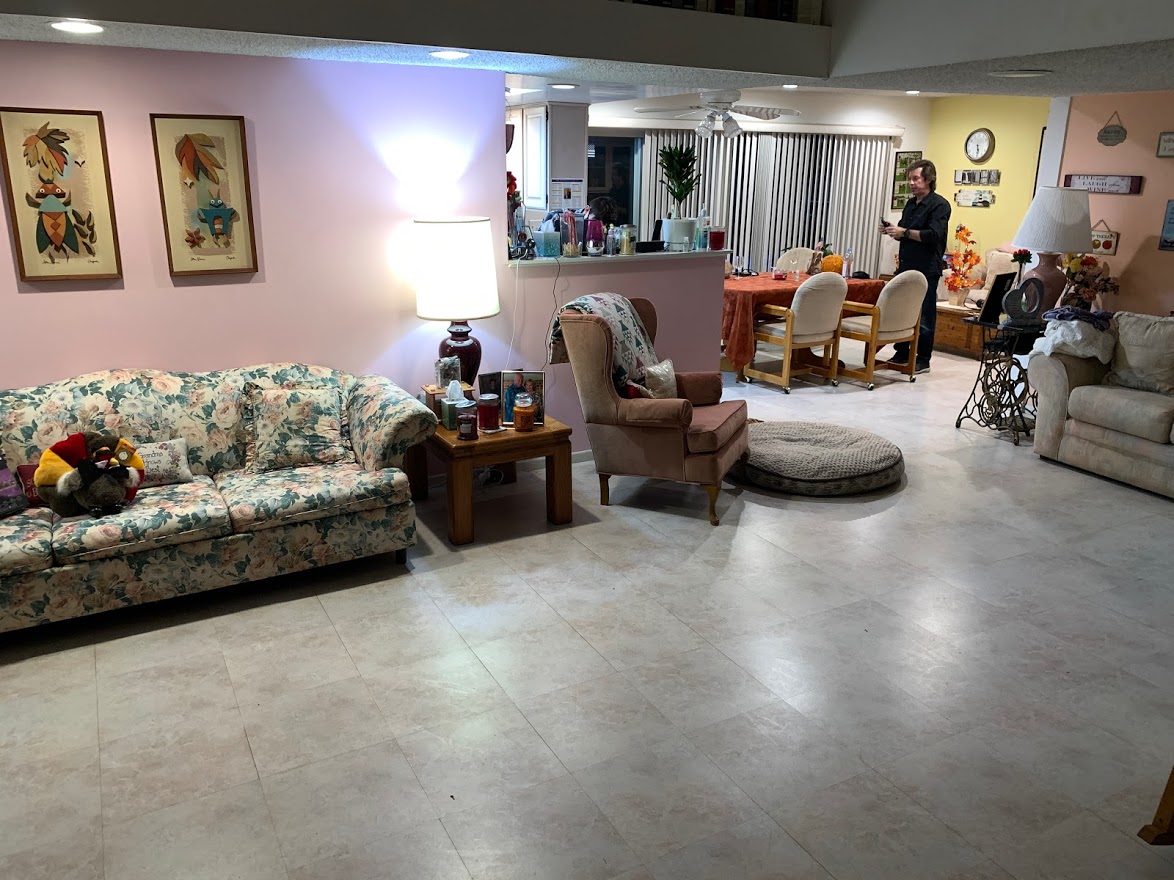 We sat for a few minutes as our guests headed home.  Mary and I decided we needed to go to Joe’s for another dessert but as we turned on to Katella, the phone rang.  It was Joe, the power was out at his place so we returned home.  We had the Santa Ana winds this evening as we drove through a leaf-storm returning home.

We visited with Robin, Bob, and Nick for another hour.

I missed Colleen and Mark but I know they were in good hands and good hearts with their friends in New Hampshire. We will see Joe and Amy  sometime tis week.

Just an old retired guy trying to finish out my last years on this planet. I lost my best friend and wife in early 2020. I was blessed again by reconnecting with Dr. Mary Côté, a long-time friend. Mary and I got married July 28th, 2021, and are enjoying life together and plan to spend the rest of our lives being a blessing to our friends and family.
View all posts by Paul →
This entry was posted in Cooking, Family, Food and Wine, Friends, Working Around House. Bookmark the permalink.