The shovel was a groundbreaking invention.

Waking up and having a purpose in life is outstanding.  I am going to be a baby sitter today!  The bright side is no screaming and no diapers!  It is 6:30 AM, and I am on the road again, this time heading due East into the sun.

On my way, I called Zack to wish him a happy 30th birthday.  OMG, thirty years!  It is quite impressive when your kids are born but seeing your grandkids pop into this world and see then turn thirty and have kids of their own, wow!  Nick turns twenty-one today, goodness, how does this happen? 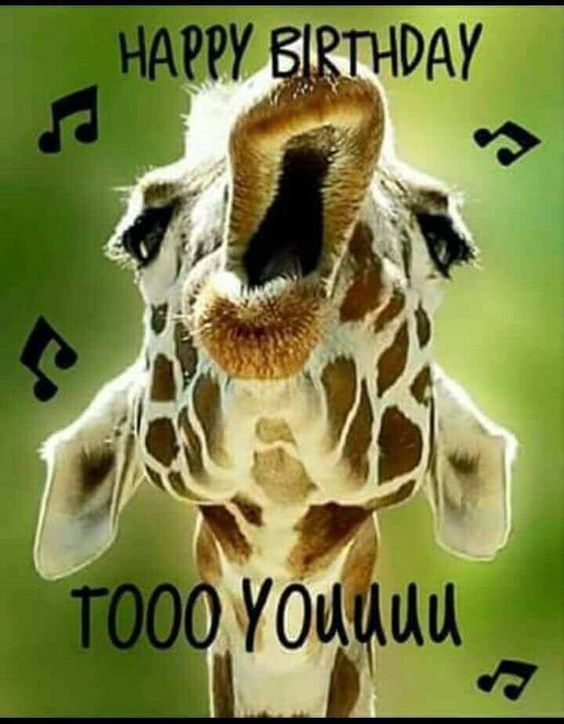 I was going to sing Happy Birthday, but that might be considered cruel and unusual punishment.

At 7:00 AM, I arrived at Mary’s just in time for a hot cup of coffee and seeing Mary disappear into the office to do her Zoom meeting. Scout and I watched the news, and we both shook our heads. 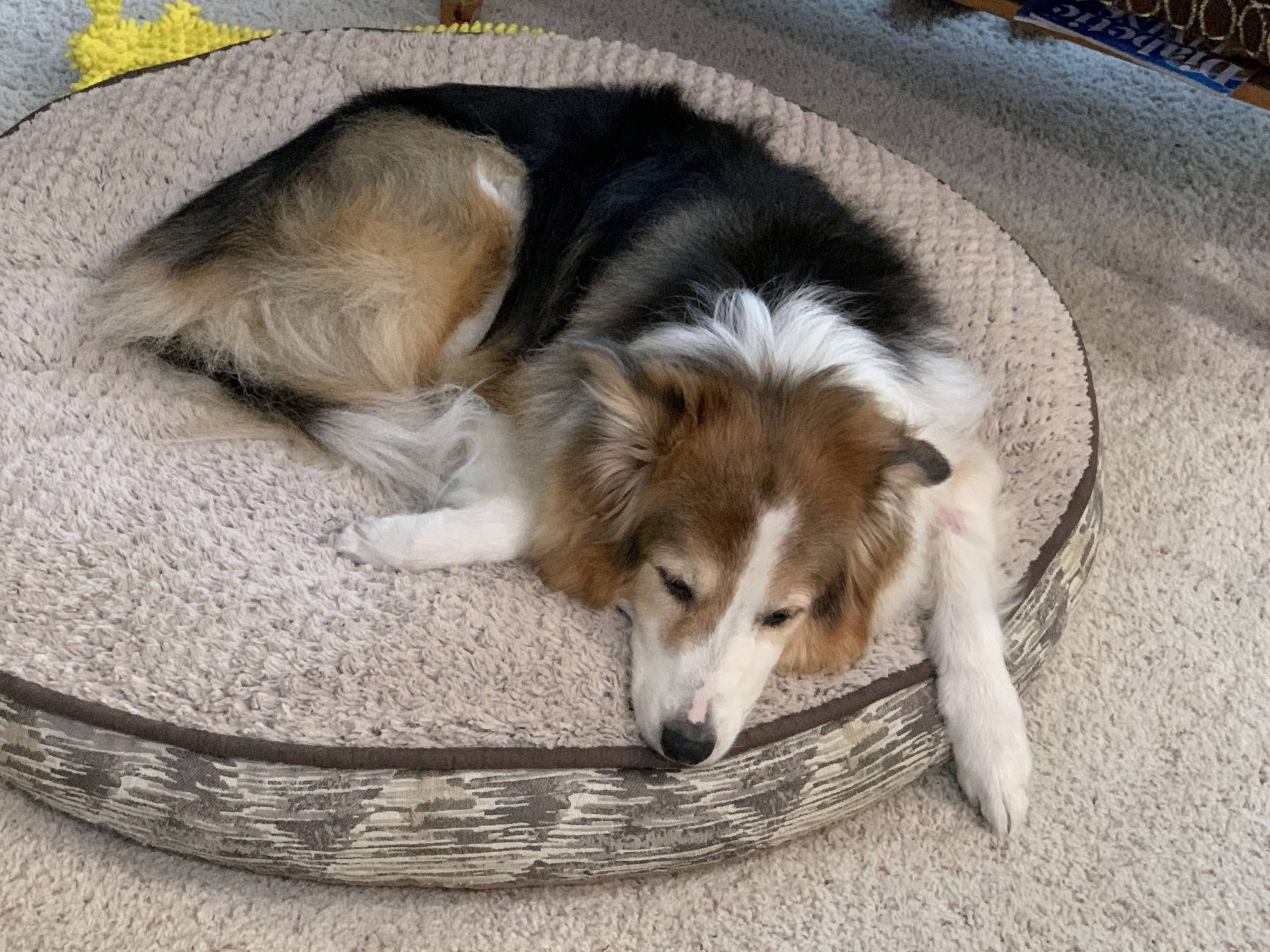 He was ready for me!

Mary headed out for work, and it was just us guys!  Scout had some suggestions, but they were quickly nixed.  I didn’t think the two of us barking at the people walking by would be a good idea.  Also, his suggestion of chasing cats was not taken seriously, especially at my age.  Now his idea of playing ball was good, but who is going to throw it to us?  We settled on TV.

So, here I am, minding my own business watching TV with a little blue blanket wrapped around me when all of a sudden, POUNCE!  What is going on?  Then I saw “the nose,” and I knew what had happened.  Scout wanted on the couch also!

Do you have any idea how difficult it is to get a selfie from a horizontal position with fifty-five pounds of doggy on you?   Well, this wasn’t the best part.  Scout finally decided there was not enough room side-by-side, so he pounced right on top of me, and now we both had plenty of room. 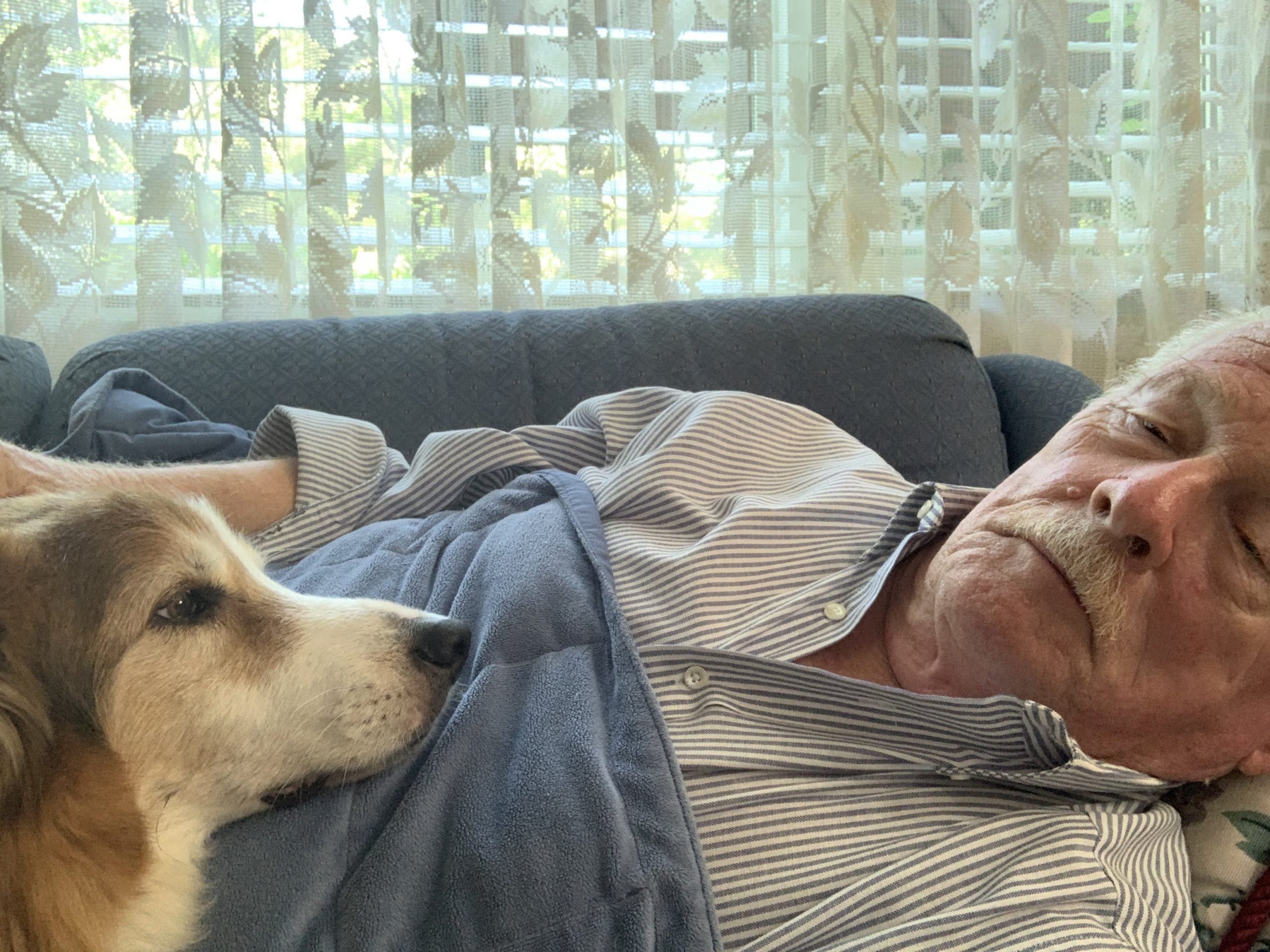 The weight limit on the couch immediately flashed into my mind!

After an hour, when I felt the circulation in my lower extremities beginning to stop, we decided to go outside.  Scout did his business, and I relaxed on one of the chairs.  Well, relaxed is relative because Mr. Scout wandered over and plopped his head in my lap, and we played his new game, count the birds! 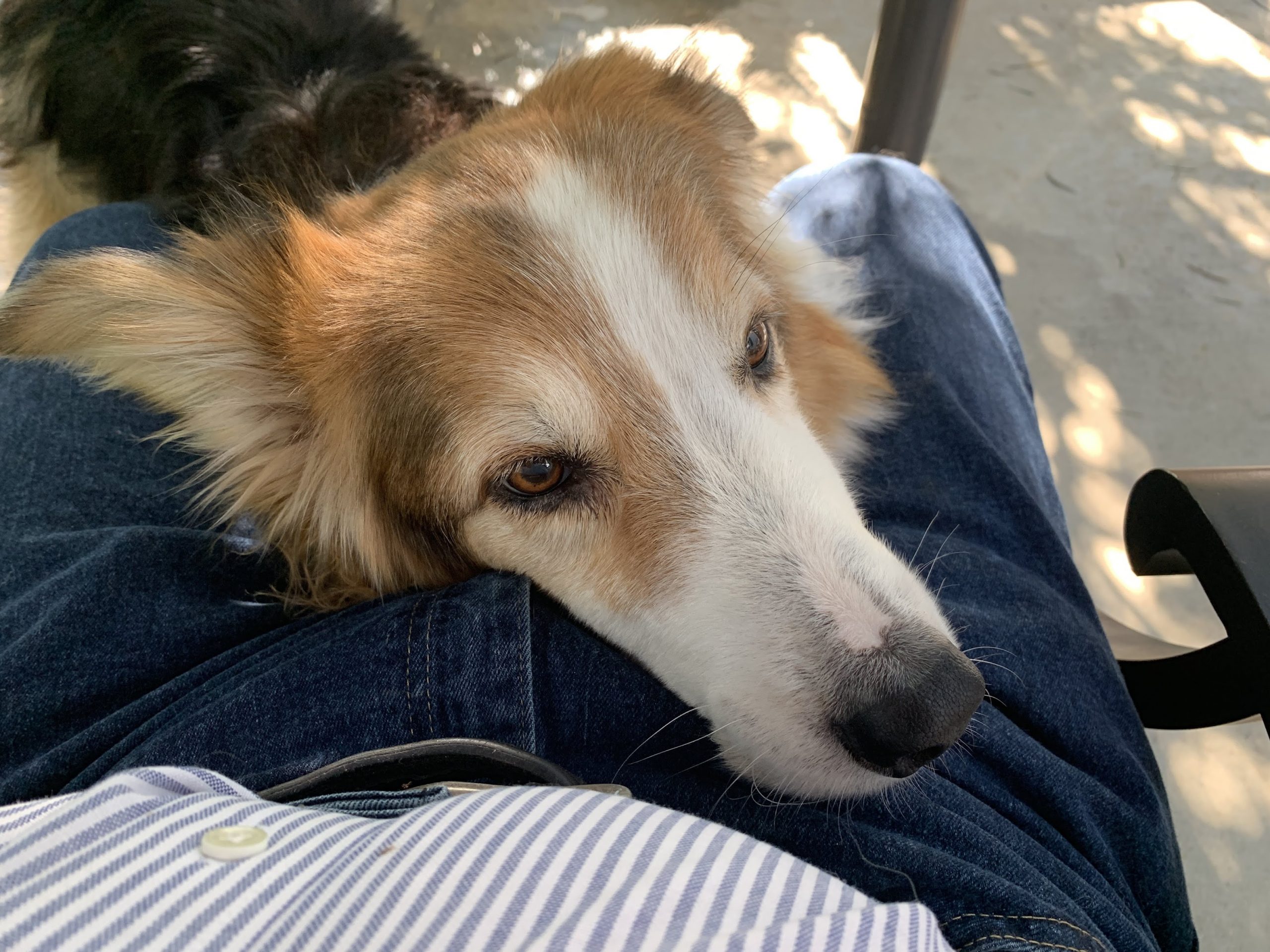 That boy was not moving at all!

Around 10:30 AM, I managed to escape his grip and told him about “Girls Night Out.”  I headed for home to freshen up and get into a non-hairy set of pants and shirt.  Then it was off to the Santa Ana Elks for our weekly get together.

My cell phone went off at 1:00- PM, and a text message appeared saying, “Bark, bark woof wooooof, bark”  It was from Scout. The rough translation was, “If you don’t hurry back, I will tell mommy you only stayed five minutes and not to pay you!”   Well, needless to say, the Silver Fox and I flew into action and headed to Mary’s, leaving only the smell of burnt rubber in the Elks parking lot.  Onto the freeway, I got it up to 65 MPH, no, really! 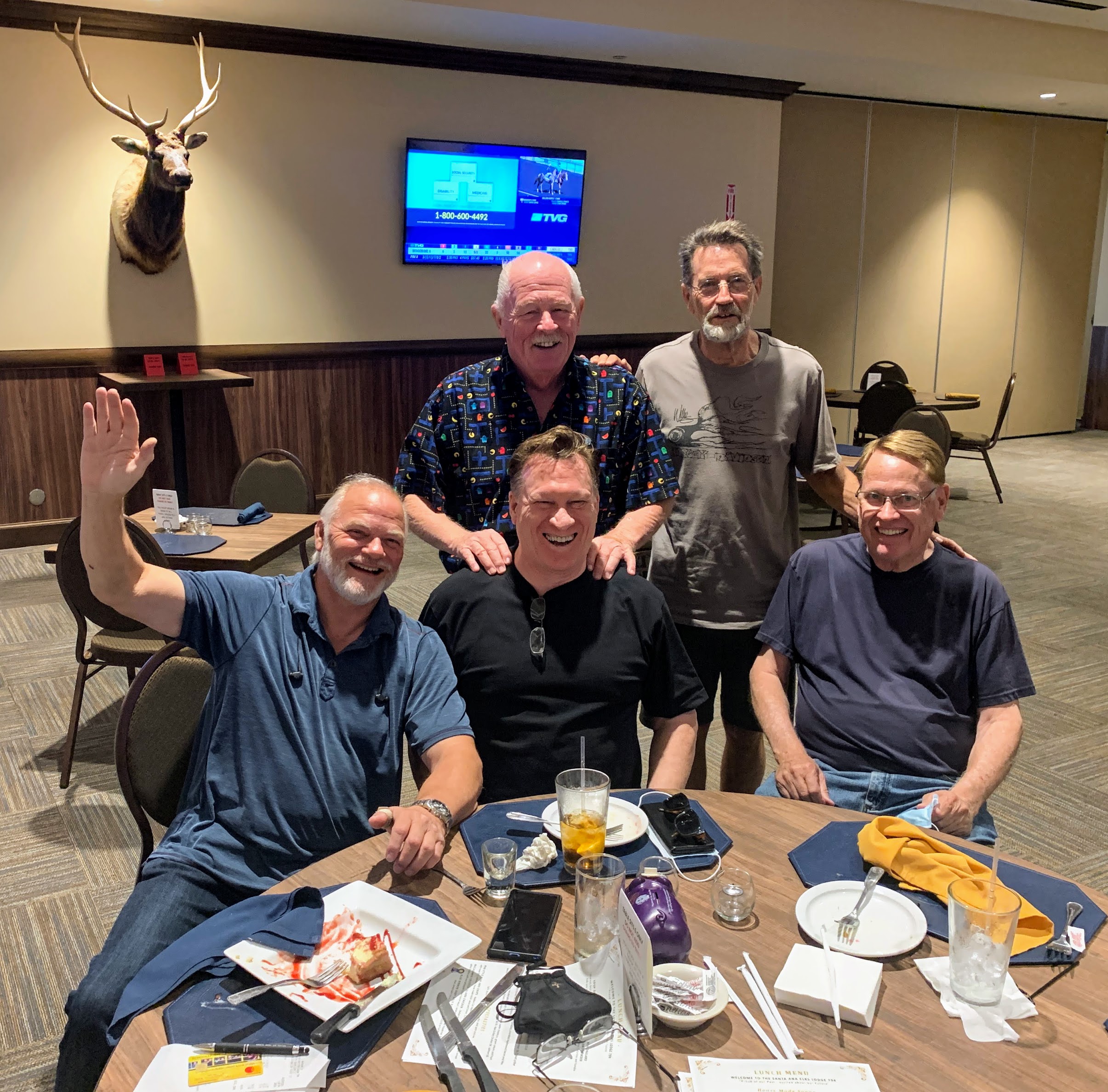 We hooted and hollered for an hour before being thrown out!

Have you EVER seen a dog sitting at the door tapping his fingers and looking at his watch?  It felt like my mom when I missed my first curfew.  He was wondering why it took so long to go six miles.

I mentioned I stopped by the market for some necessities of life. 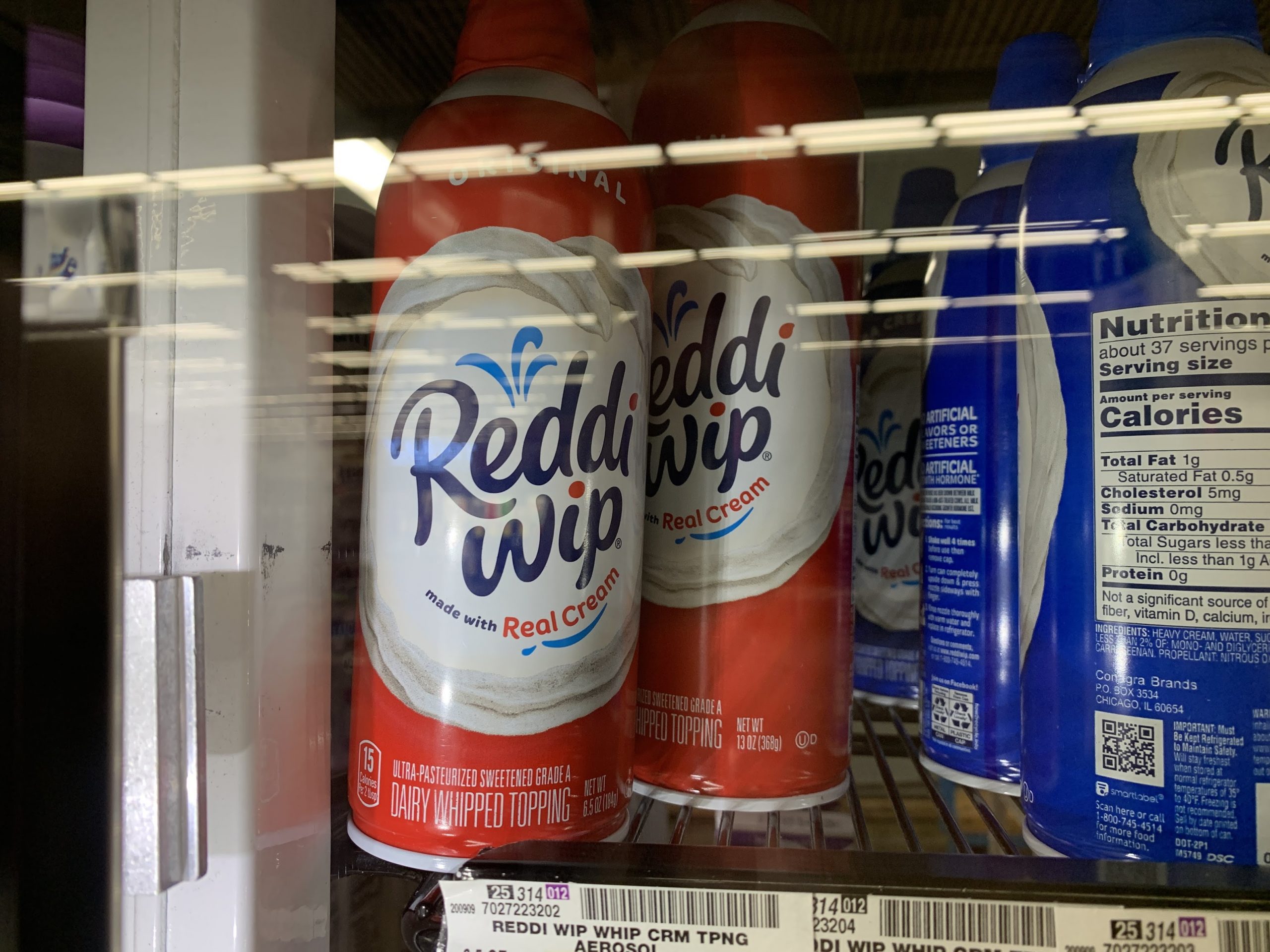 I know there is some Rocky Road ice cream lurking in the frig!

As I was shopping, I heard this frog-like sound, and, since I speak perfect frog, I listened carefully.  I was saying, “Mary need me on her mantle!”. 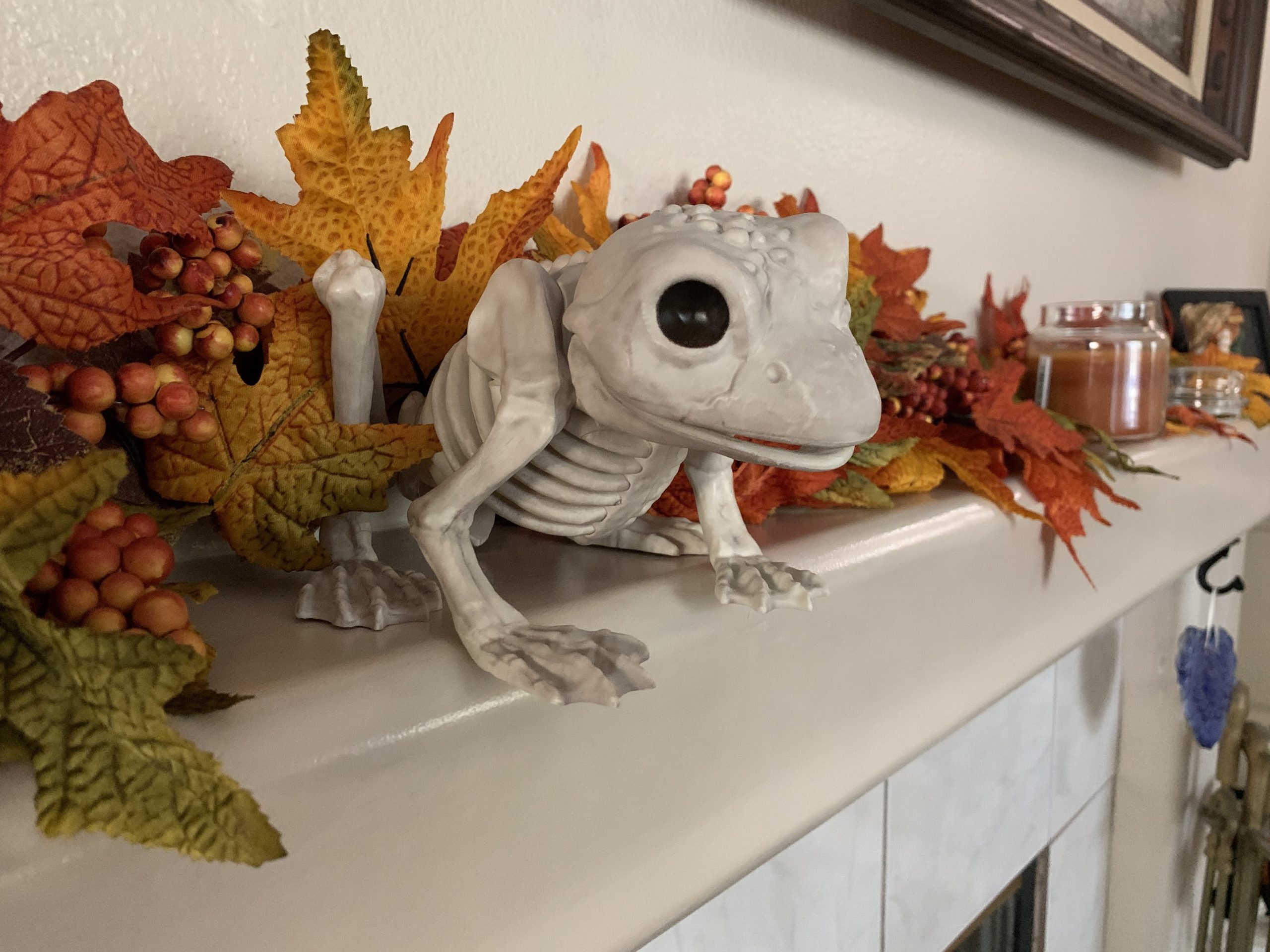 I could not pass up the Halloween Frog, a necessary addition to Mary’s frog collection.

Roses are also a necessity of life, so they got added to the collection of goodies. 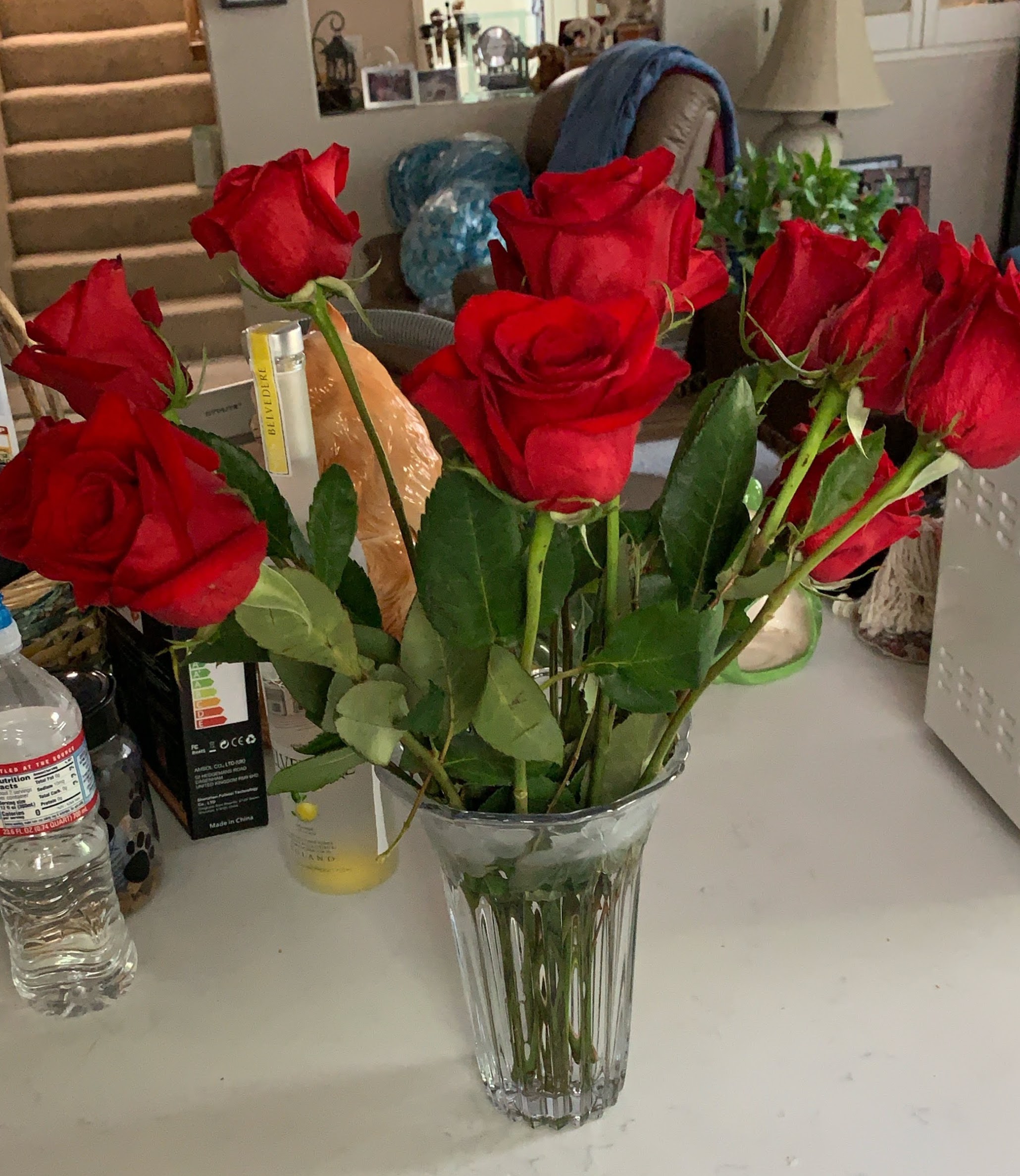 After explaining my rationale to Scout, he understood and forgave me, only biting me once!

Well, we were supposed to go to Catal as that is Nick’s birthday tradition, but we found out at the last minute Catal was closed, the COVID thing.  To make up for my indiscretion (the ten-minute side trip to the market), I made reservations at the Orange County Mining Company, six blocks from Mary’s home.  That means we leave Scout for far less time. 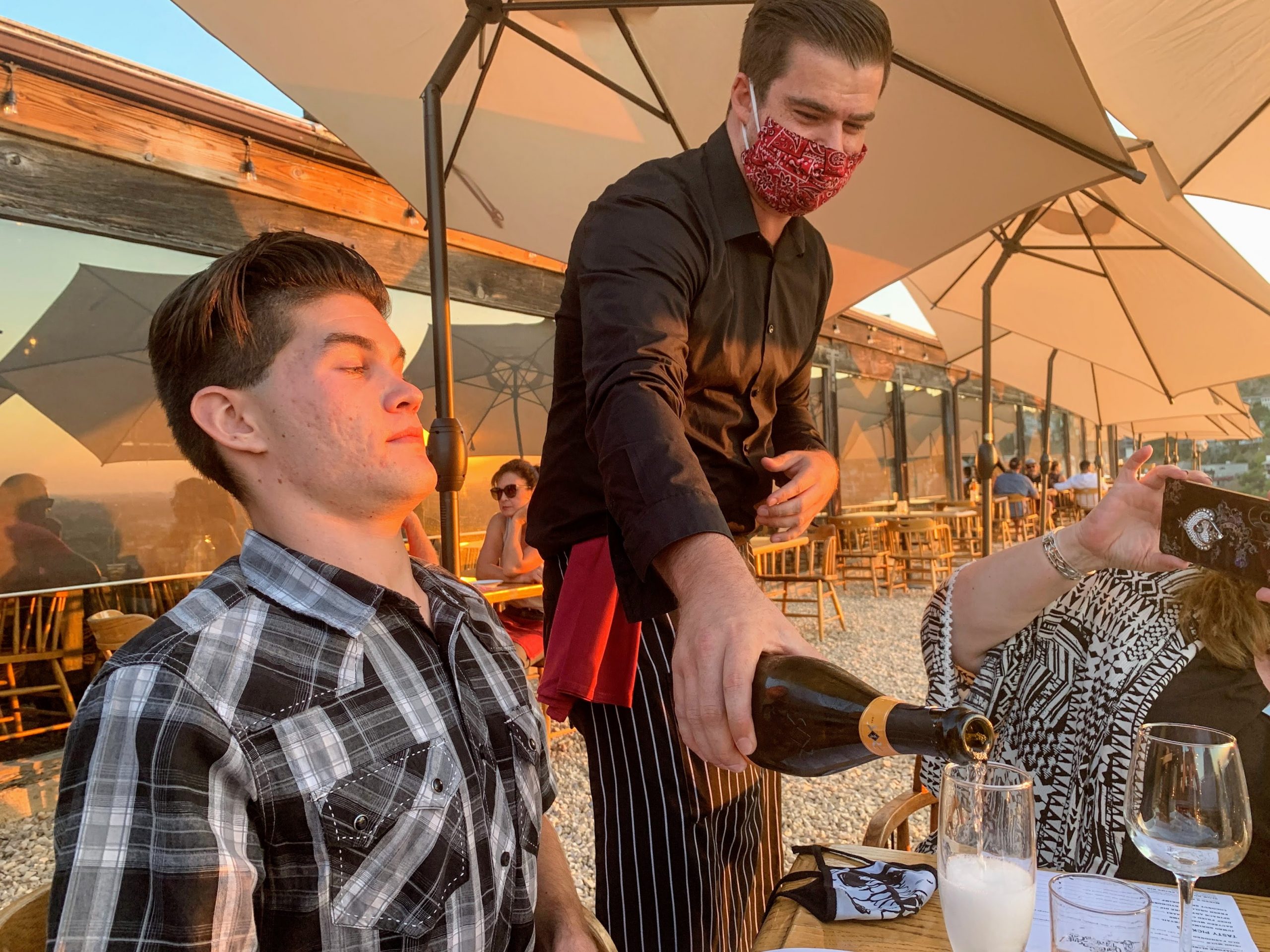 Nick’s first legal drink! We had great seats, and we watched Ol’ Sol do hiss daily swan dive into the ocean. 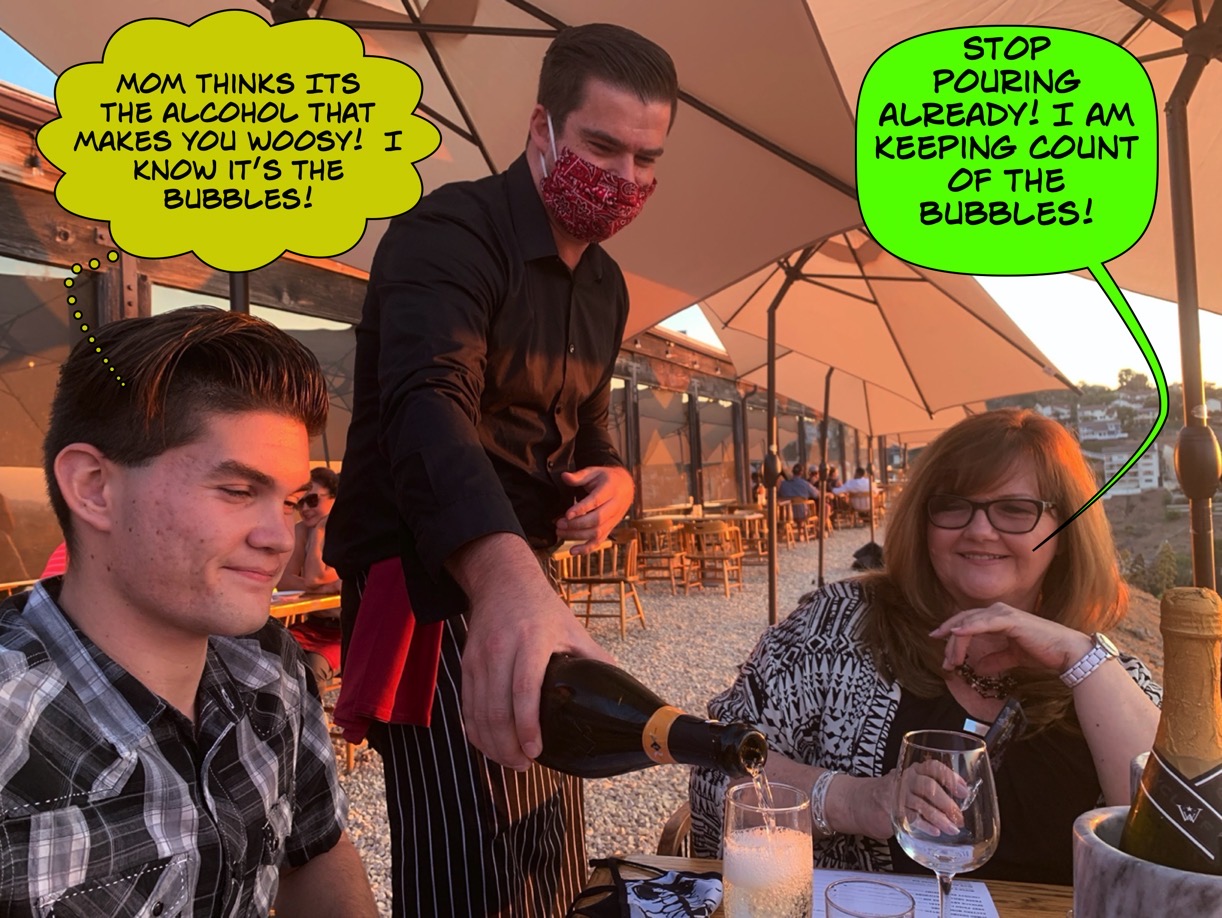 S-h-h-h-h-h Mom is counting the bubbles!

Here’s to a great life!  As Grandpa said, “Believe in the Good Lord and Never Miss A Chance To Make A Good First Impression!” 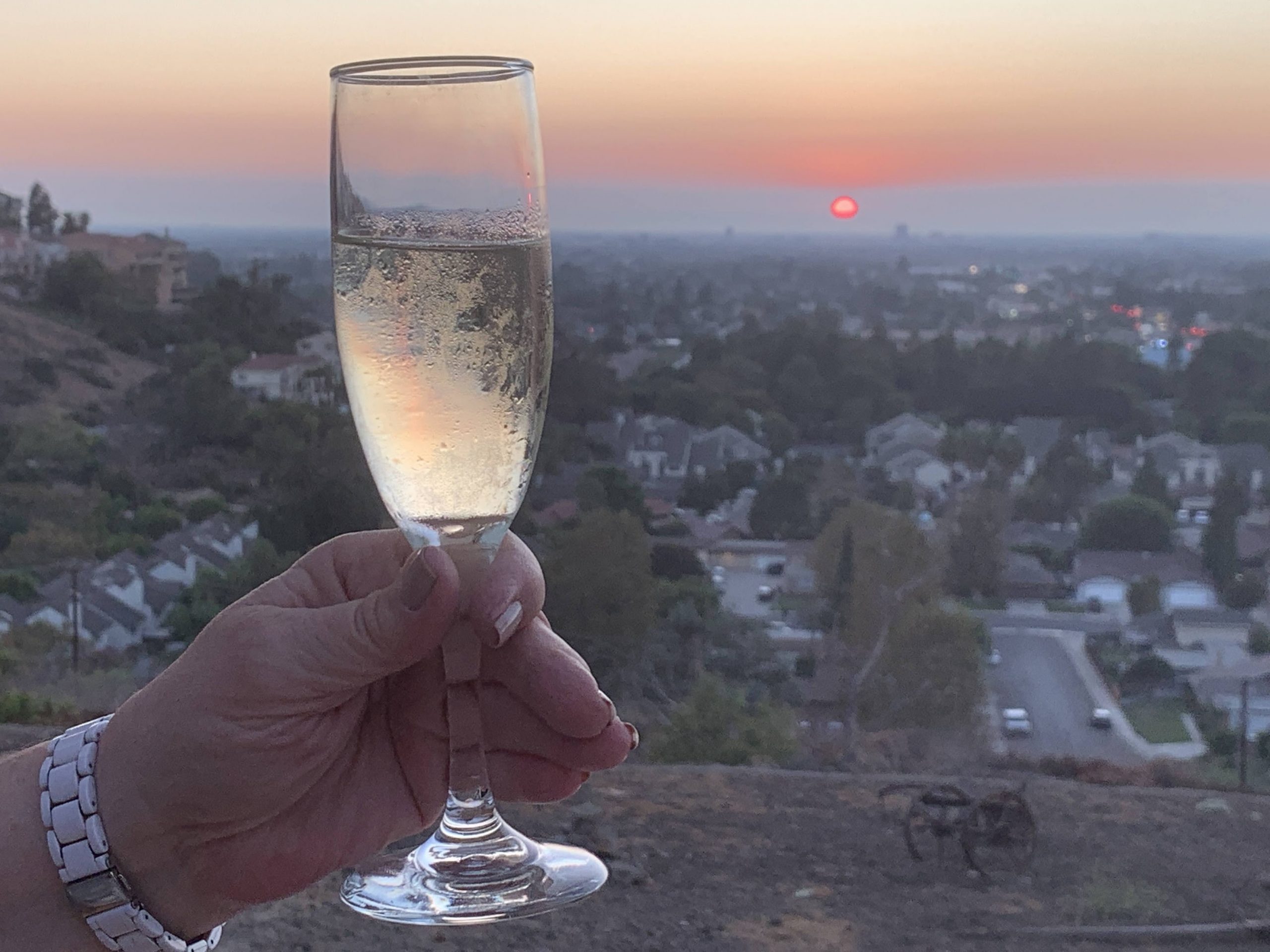 The sun was setting; the champagne level was lowering.

Time for the toast, I wanted raisin bread, but I was outvoted.  Bob gave a profound and loving toast to our new member into the Twenty-One And Over Club. 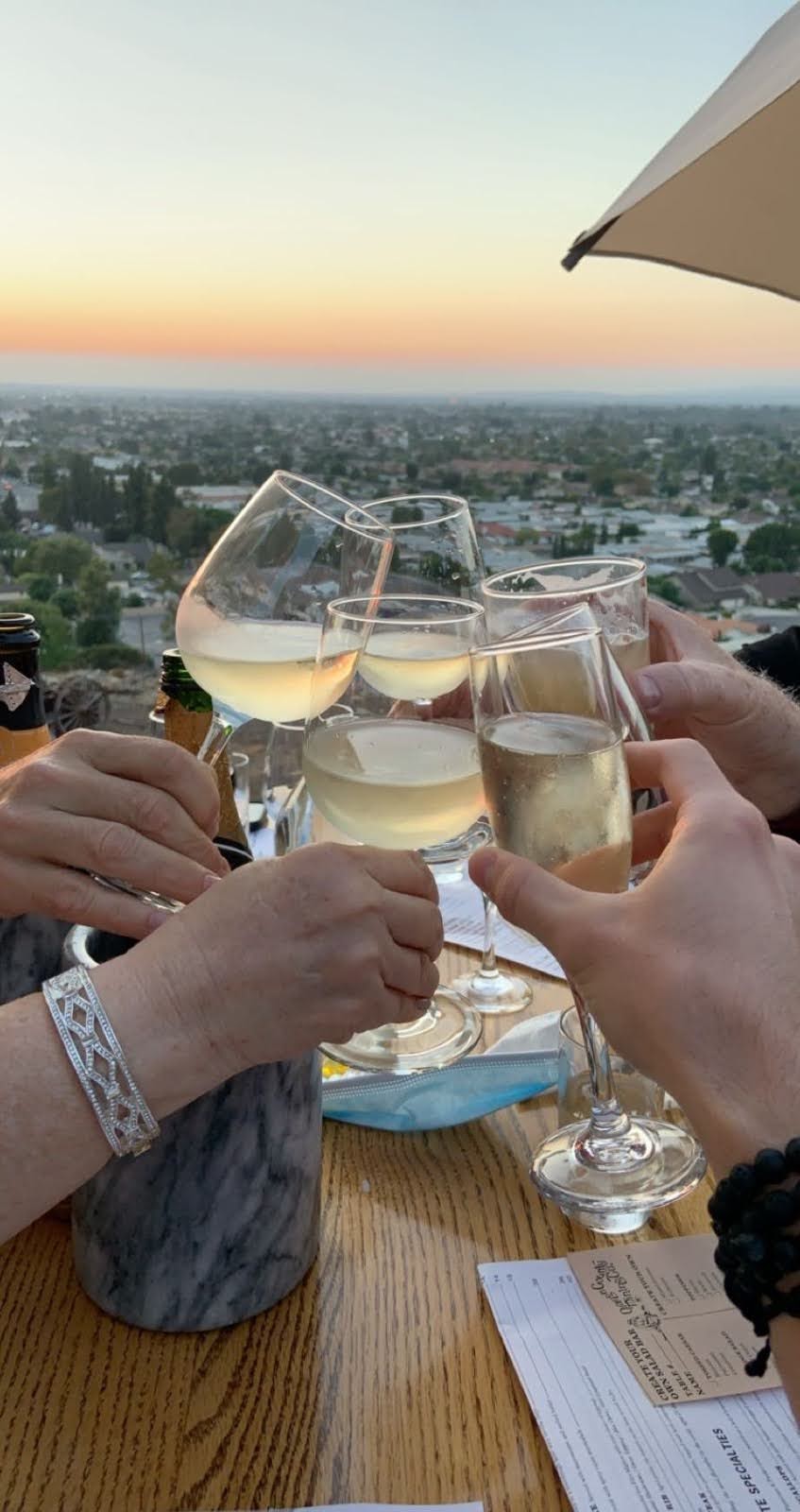 A toast to a great guy, Nick!

The five of us had a wonderful.  The pictures were not super tonight as we were too busy getting to know each other and laughing at all the nonsense going on. 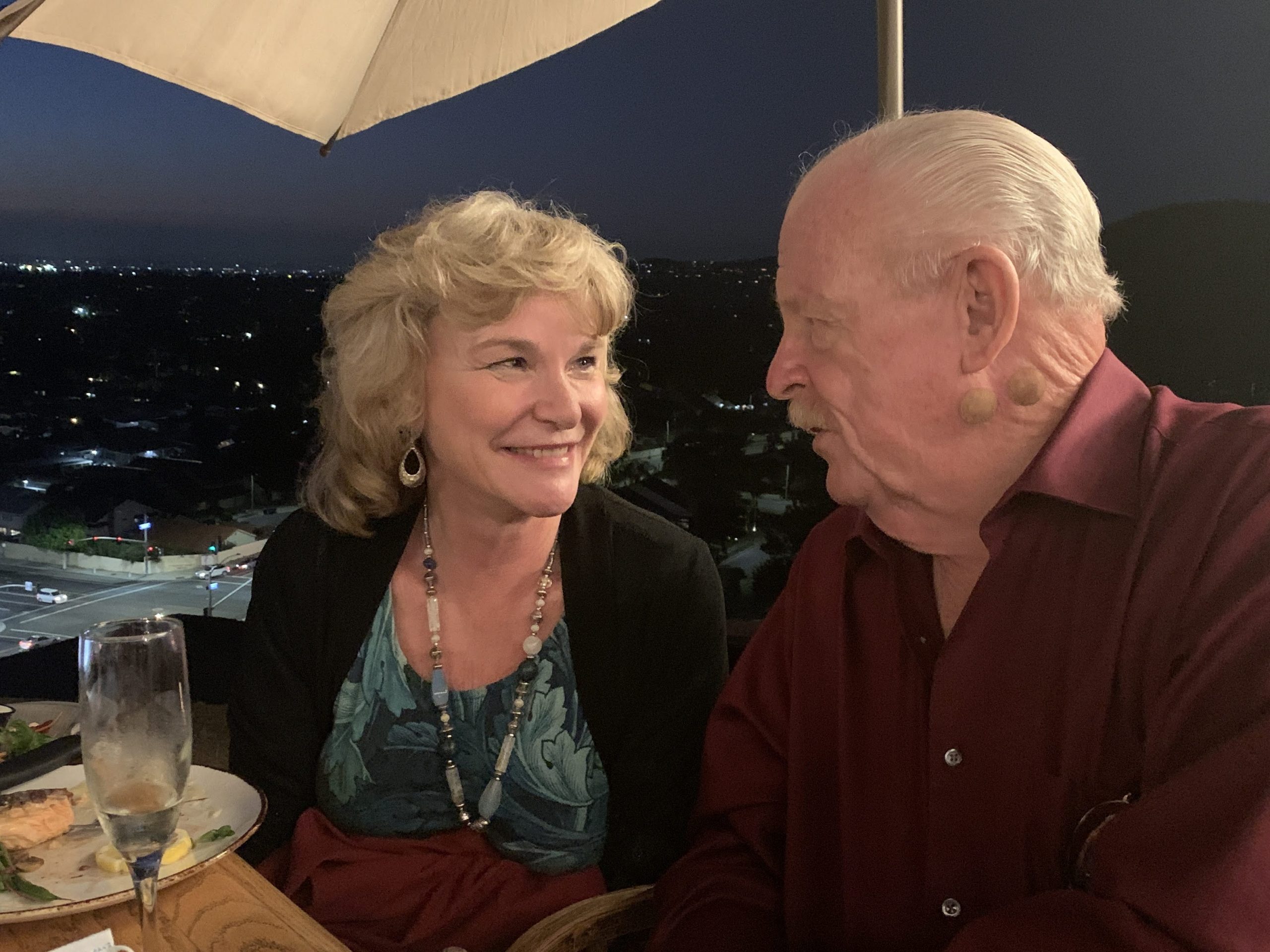 Time to depart. Time to get home is only six minutes flat; two minutes had Mary been driving. Think smoke, flames, loud noises, and my eyes bugging out as we hit Warp-7.

Mary and I visited for a few minutes, started a movie, but we are both tired, so we parted ways at 9:30 PM so she could get some rest as she works tomorrow.  The Silver Fox and I shot down the freeway reaching an unheard of speed of 67 MPH, a record breaker!  It was too late to stop at Patty’s, so I went to bed, turned on the TV, and as out a few minutes later.

Just an old retired guy trying to finish out my last years on this planet. I lost my best friend and wife in early 2020. I was blessed again by reconnecting with Dr. Mary Côté, a long-time friend. Mary and I got married July 28th, 2021, and are enjoying life together and plan to spend the rest of our lives being a blessing to our friends and family.
View all posts by Paul →
This entry was posted in Dining Out, Family, Food and Wine, Friends. Bookmark the permalink.