A Buddhist walks up to a hot dog stand and says, “Make me one with everything.”

It’s going to be another fantastic day!  I’m up to date with the daily diary; the clothes are all washed and dried (but not hung up), and I get to spend the afternoon walking with my favorite person!

Mary called about noon and had one patient remaining, so I departed for her office, and the timing was perfect. She had just finished with her last patient when I arrived, and I got the grand tour of her office.  I also got to meet the staff, a friendly group of folks!

Now it will be easy to visualize her when she calls from the office.

San Clemente was our target this afternoon, but first, it was lunchtime.  We went to Matsu on Beach Boulevard. I did the sushi while Mary took the more conservative approach.   The meal was delicious, but, for some reason, I felt the need to cling to a rock. It must have been the muscles! 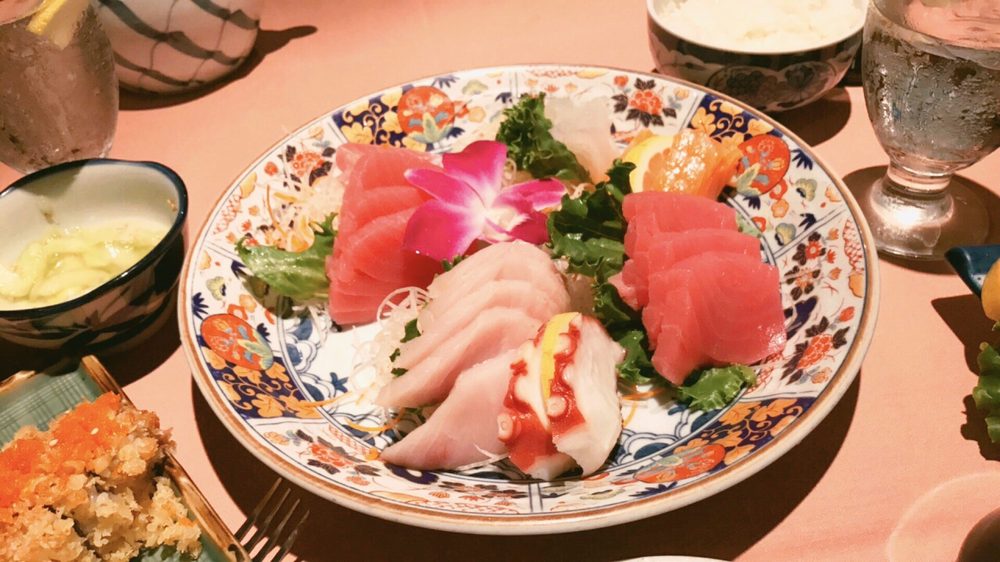 The Silver Fox headed out, and we decided PCH was the way to go.  There was traffic but a lot of scenery. Mary said she enjoyed not having to drive as she could see things usually missed had she driven.  Of course, not to miss an opportunity to tease her about speeding, I suggested she look at the telephone poles, which, when she navigates, appear as a picket fence.

San Clemente is located on the California Coast, midway between Los Angeles and San Diego, the southernmost city of Orange County, is known for its ocean, hill, and mountain views, a pleasant climate, and its Spanish colonial-style architecture. San Clemente’s city slogan is “Spanish Village by the Sea.”

The pier was only about thirty minutes away from her office, so it was an easy drive. We parked in the lot adjacent to the dock.  It was not easy to judge the length of the structure from this angle, so Google to the rescue.  The wooden wharf is a 1296 foot long walk one way! 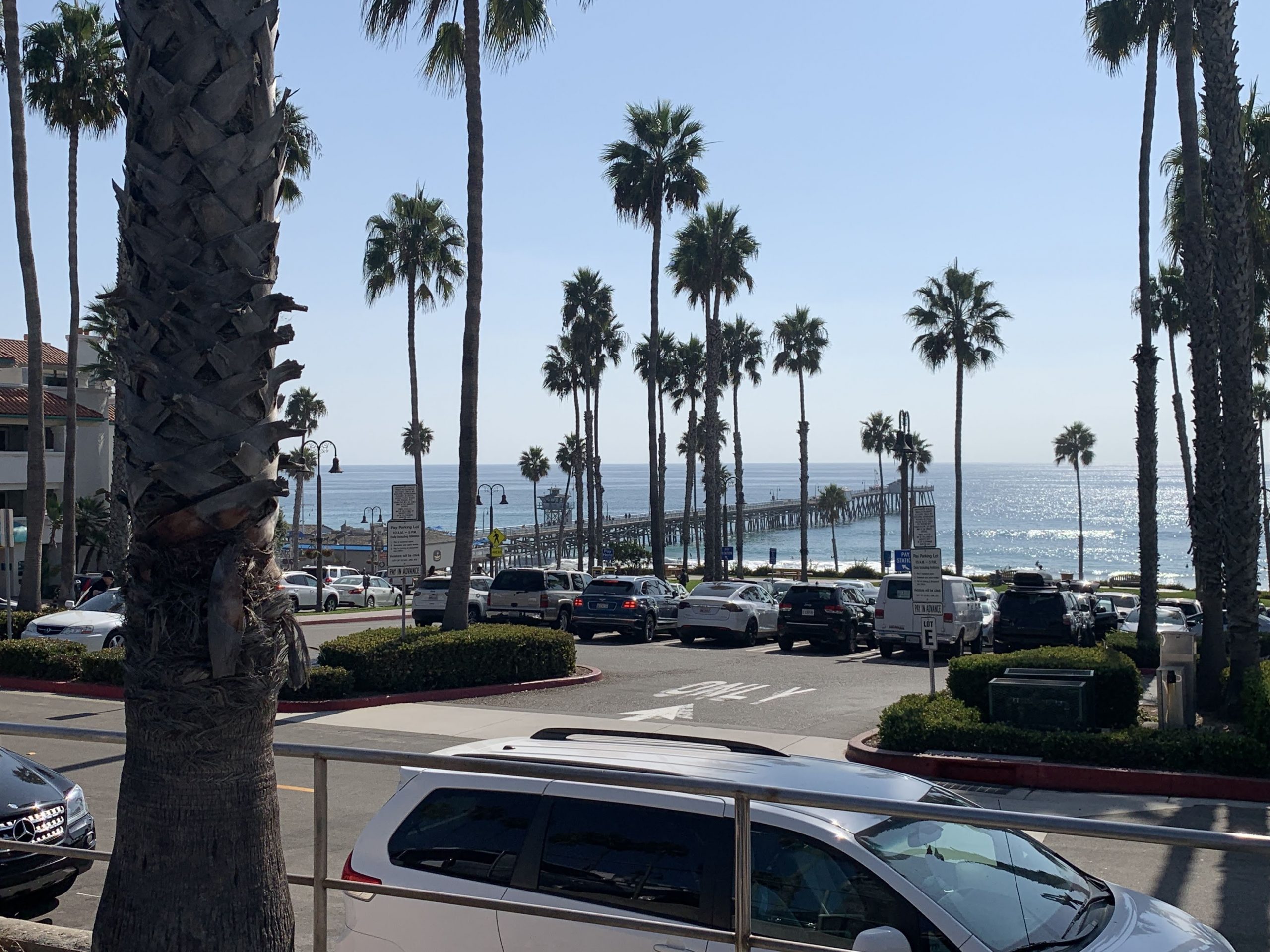 One more pier down!

Mary made sure we would remember where we were.  She does a mean Vanna White pose!  We decided to stop for a glass of vino before walking.  Masks on, we are ready to visit the local purveyor of wine! 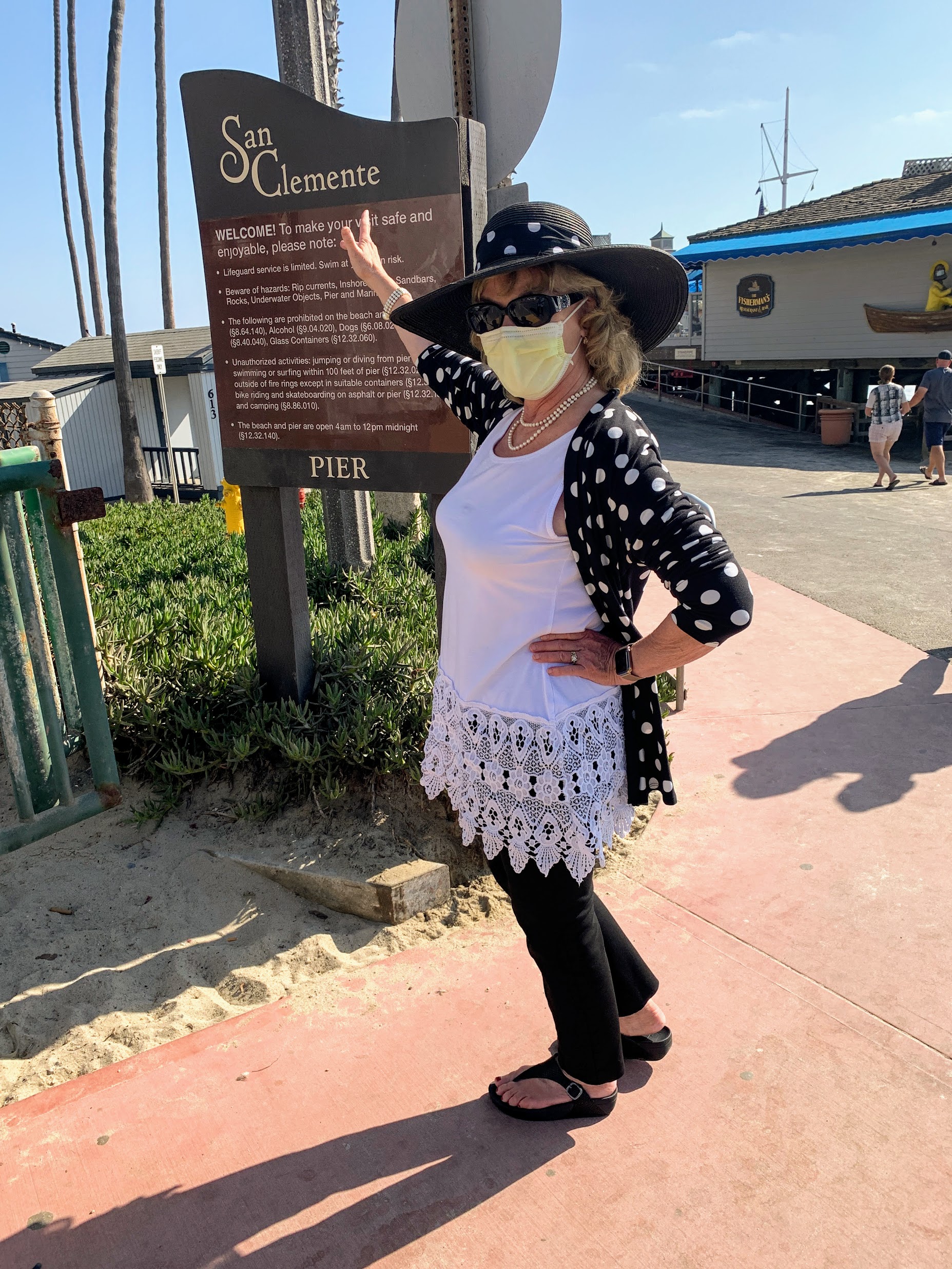 Time to walk, and we did.  It took a while as we stopped and looked at the surfers doing their thing.  Along the route, we saw an interesting birdbath!

Did You Know? The first-ever construction of the San Clemente Pier happened way back in 1928 with just a length of 395 meters. It was once one of the centers for alcohol smugglers in Southern California. 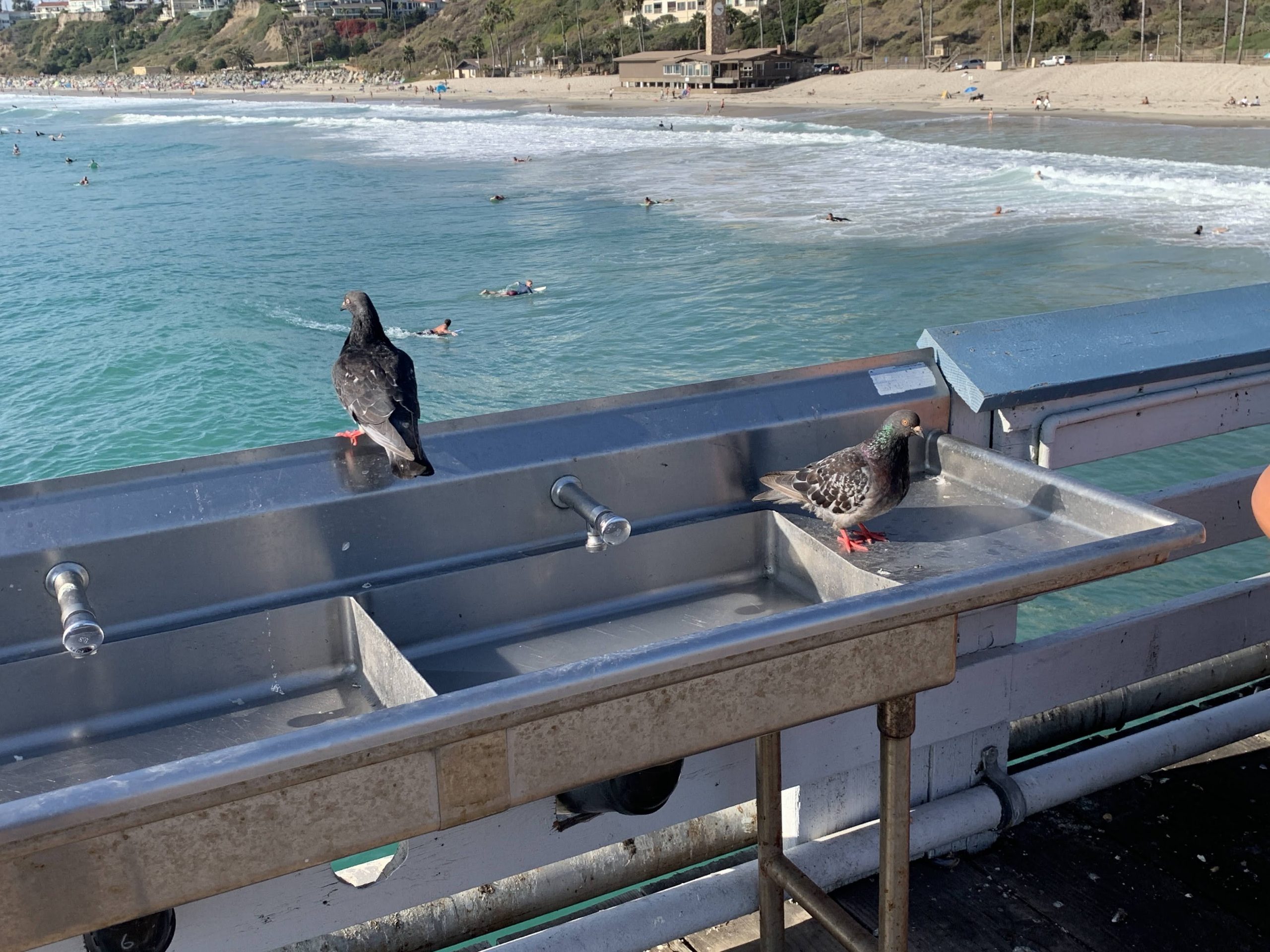 It was a picture-perfect day as we strolled along the wooden planking. It was getting towards 5:00 PM, and we headed back to the beginning of the pier passing many fishermen.  At the end of the dock, we heard someone yell, “Sharks,” and we immediately looked carefully and did see a school of minnows.  Then, a couple of dark shadows appeared, and then we caught a glimpse of several small sharks dining on the little fish! 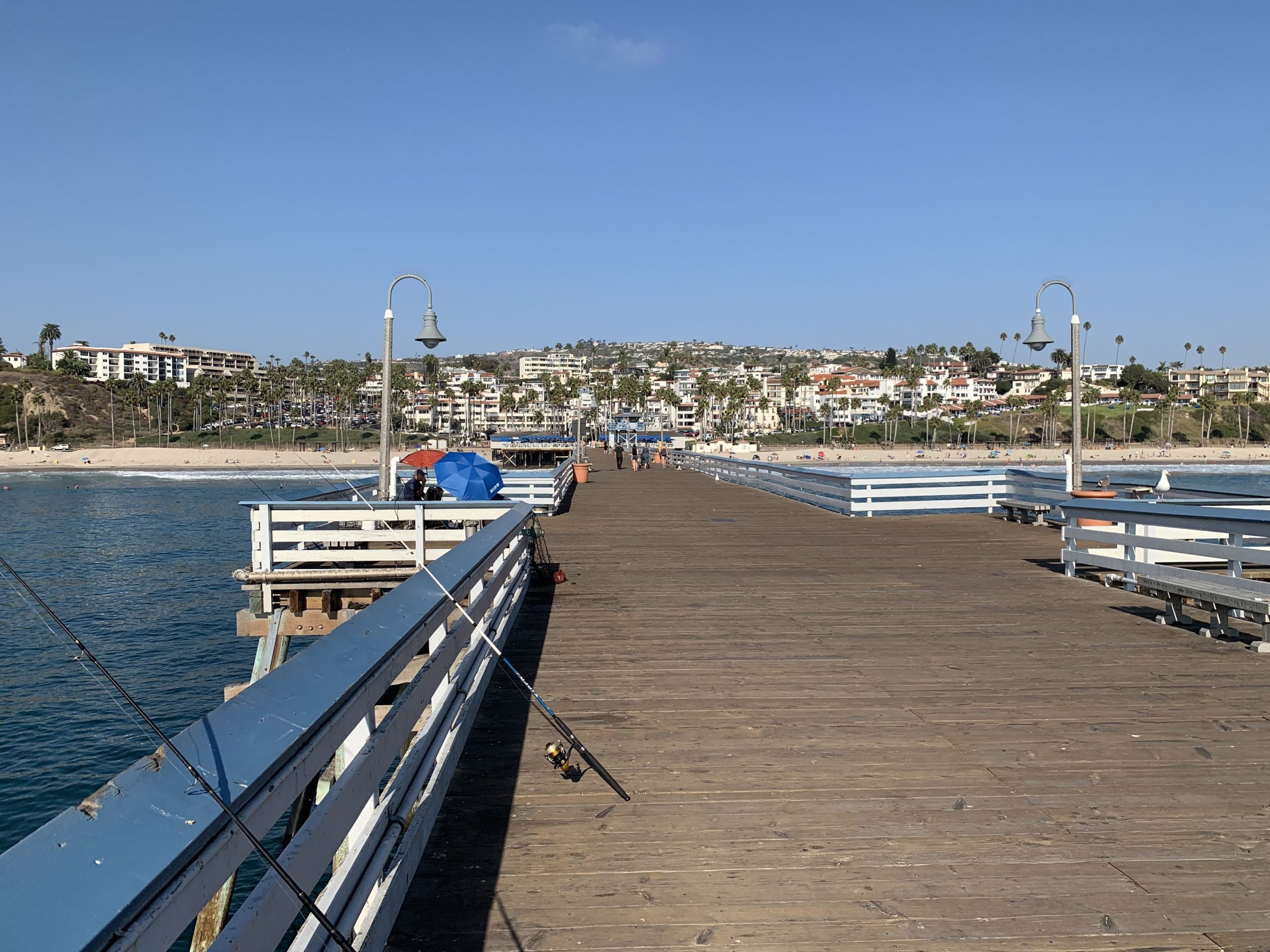 It was time to head home, so we passed the little restaurant foregoing our second wine, and The Silver Fox whisked us away in glorious comfort.  Mary left Precious, her car, at the office, so we returned to Huntington Beach before going home. 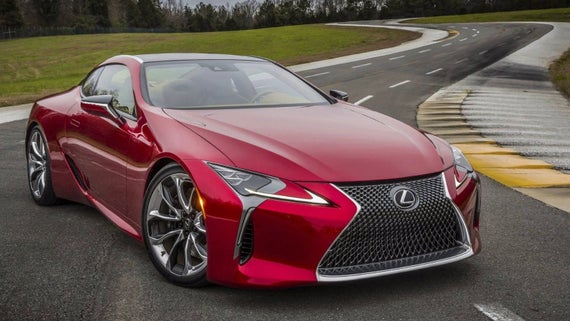 Precious was ready to go home!

We arrived at Mary’s around 6:00 PM and took Scout for a walk around the hood.  Mary fixed a light dinner, and we dined outside on the patio.

Then it was time for “The Marvelous Miss Maisel.”   We watched the first two episodes and laughed until we hurt.

I headed home at 10:00 PM after a super day with Mary.  Returning home, I went through the mail, fixed a small snack, and then crashed.

Just an old retired guy trying to finish out my last years on this planet loving my best friend and wife, having fun, learning, and passing on helpful things to others.
View all posts by Paul →
This entry was posted in Adventures, Walking. Bookmark the permalink.
Powered by Maribol IMDB Plugin