My cat was just sick on the carpet; I don’t think it’s feline well.

I got an early morning call from Colleen.  She had just found out my cousin passed yesterday.  Gen was 95, and she had a good run! I remember Gen and Gene them well growing up even though they were twenty years my senior. 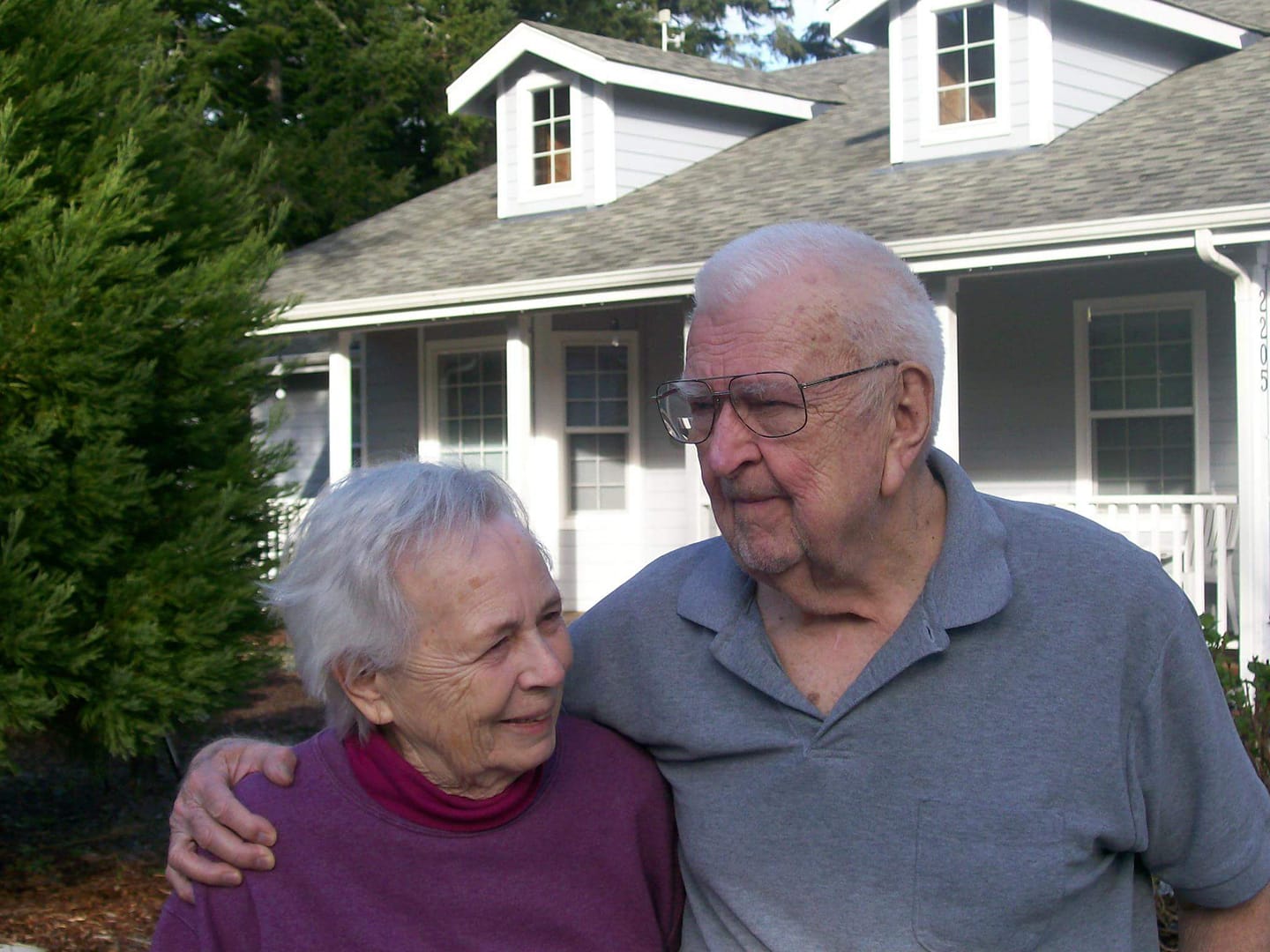 This was copied from a post by my second cousin, Dave Mall: A love for the ages. Occasionally you’ll hear that phrase used to describe a couple. Never has it been more clearly demonstrated than by these two people. They not only spent a lifetime together; they thrived knowing how deeply each one loved the other. They were one, even when it was necessary for them to be separated, all that mattered was the fact they knew they would be back together. After what you might call a hiccup, a glitch, a bump in the road, finally, after seven years, they will now spend eternity together in Heaven. Mom has joined Dad, sadly for those of us left behind, but we can all rejoice in knowing they are back together, where they belong. I cry for myself, but I celebrate them being with each other again. Words can’t begin to express the love their family has for them, nor how much we will miss them. Mom and Dad, I love you.

I finally got my carcass out of bed and did some wash before hitting the road. I needed to walk to keep my svelte figure! I took off like a rocket, but unfortunately, they forgot to fill the tank!  My speed dropped to warp-2 by the time I was an hour out.  After the hour and twenty minutes, I sputtered in on a wing and a prayer! 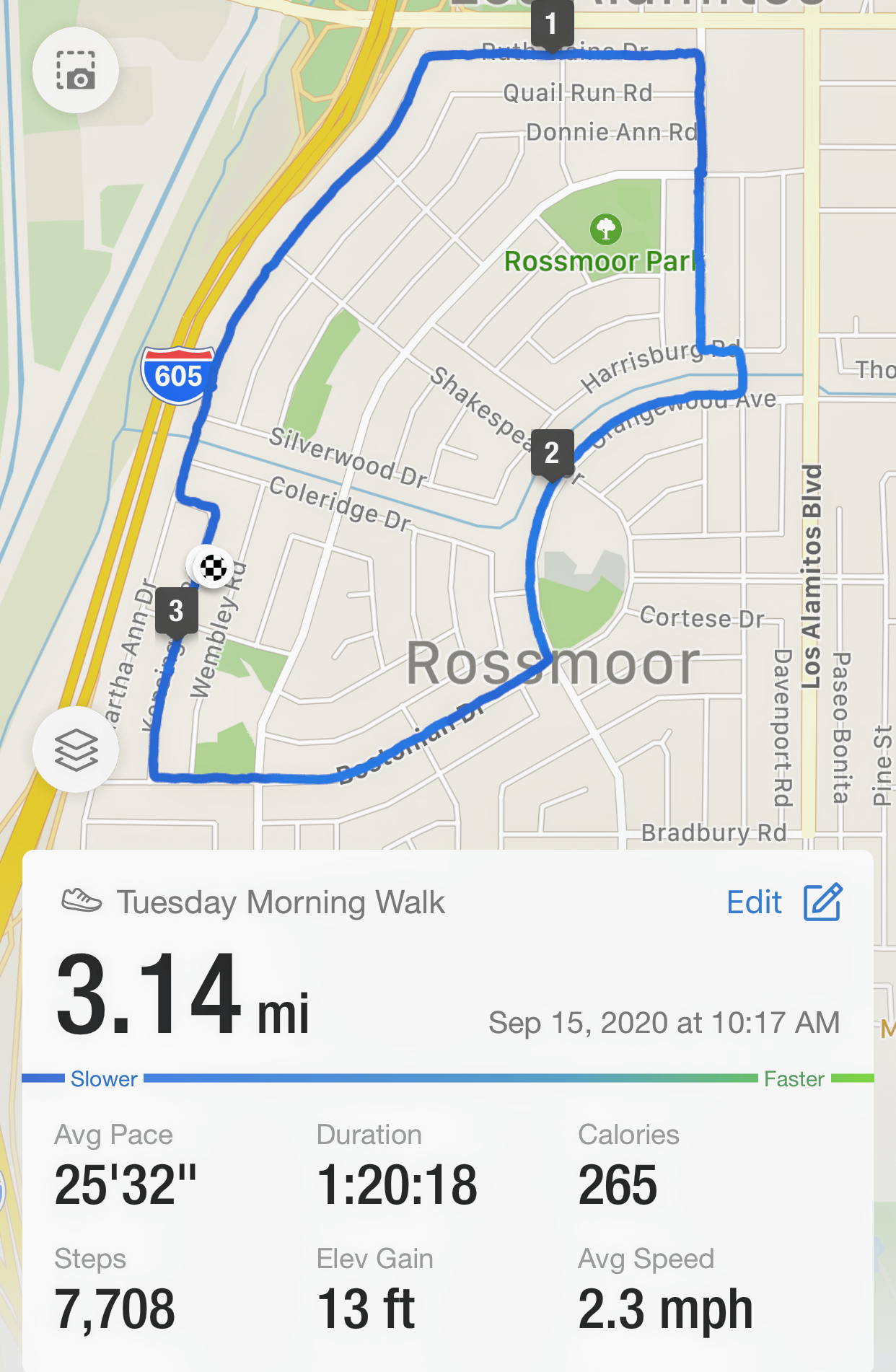 Three miles, not too bad for an ol’ fart!

My neighbors seemed to have licked the apple worm problem as the apples look great this year!  I dropped off a spray about a year or so ago when worms were attacking the apples.  This year, the apples look pretty good. 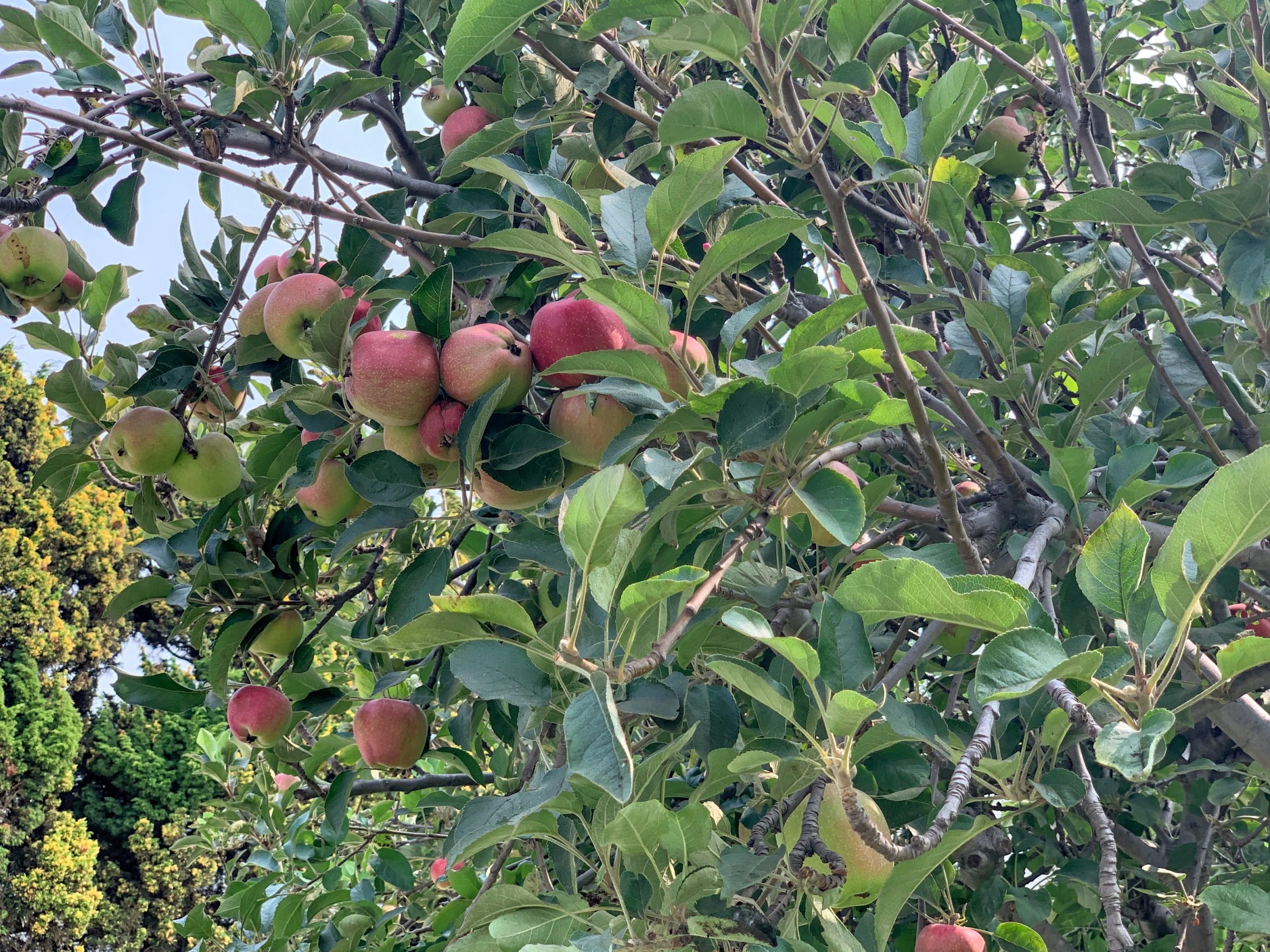 When it is apple blossom time, great title for a song!

Trump/Pence signs are beginning to show up; I may have to get one today! 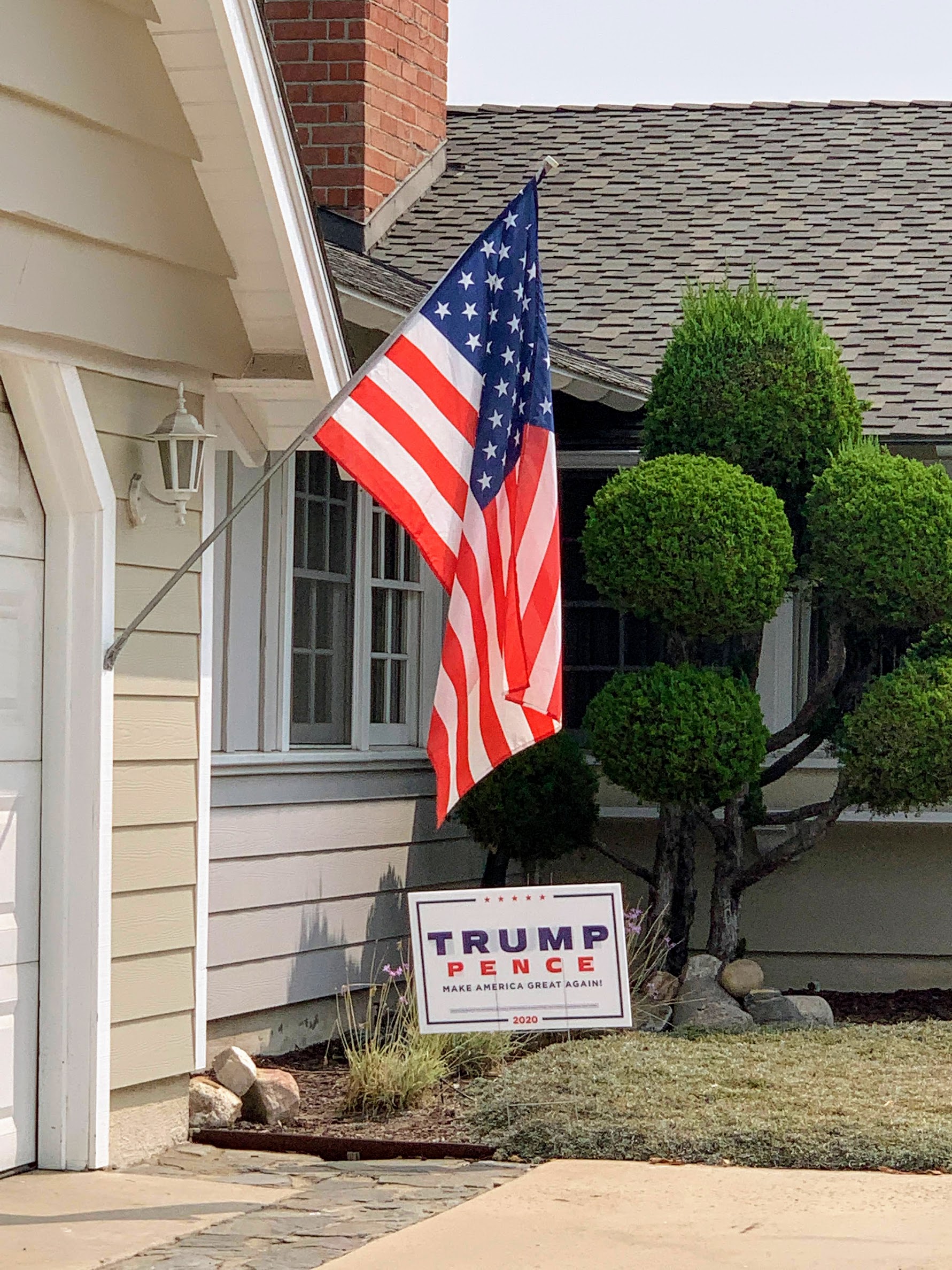 My kind of folks!

I paid some bills and diddled around the house most of the late morning and early afternoon.

The Cerritos Lexus dealer did not call back, so I got on-line and bought a new car from Tustin Lexus.  I plan to go there and sign the paperwork and have the vehicle delivered to my house tomorrow.  What a world, buying a car via the computer!

Tonight I was invited to the Hencke’s for dinner, and I asked if I could bring a friend.  I know that was a little forward of me but I knew they would like my friend. Their response was as expected, “Any friend of yours is a friend of ours!”

So, I had an idea, the evil person that I am.  I decided I would raise the ante and call them two minutes ahead of arriving and say, “I just wanted you to know I came out of the closet on April 28th, and my friend may not be what you were expecting“. What could this mean?

I also told him, “My new friend, and I would try NOT to show any affection but if we made him uncomfortable, signal me“.  Mary suggested an ear tug; I was thinking more of another pour of wine.

BTW, the part about the 28th of July was the truth, that was the first dinner date with Miss Mary!

Bill didn’t say anything, but Holly overheard the conversation and barricaded the front door, not really.  I heard the food being put away.  What really hurt was the sound of the wine being poured back into the bottles. 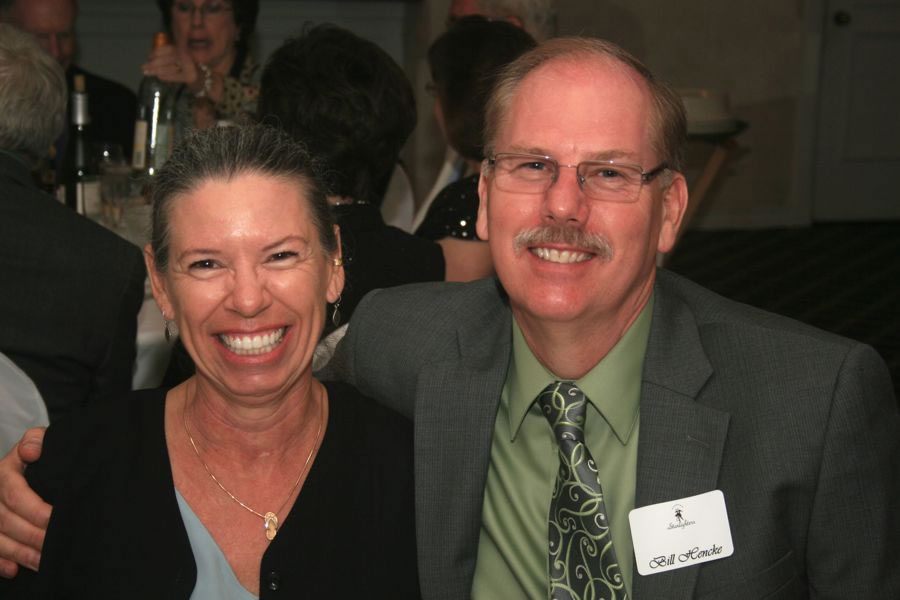 I hate to tease people; I really don’t!

The kicker is I am taking Miss Mary, and Miss Mary has been Holly’s Eye Doctor for years; the four of us know each other well.  It will be a fun evening.  I even made a cherry pie for the event!  I also planned a nice bottle of red wine and a bottle of white wine as a peace offering! 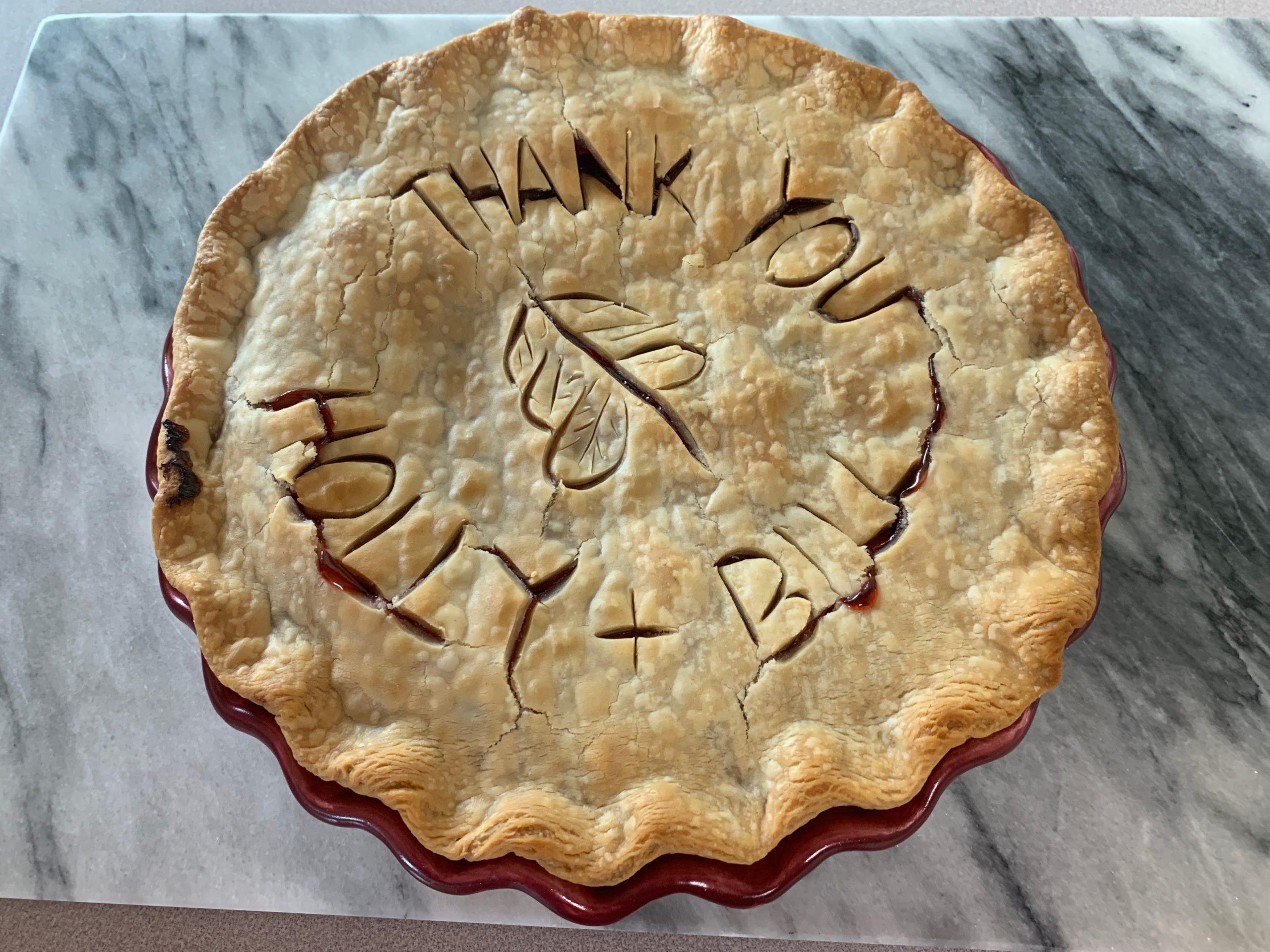 Some of the letterings were lost as the pie cooled, it does say “THANK YOU HOLLY AND BILL.”

So, Mary hides behind me as I knock on the door, and I am sure they did NOT know what to expect.  I pressed the doorbell carefully. No answer.  I yelled and stomped my feet.  No answer!  Do I have the wrong address? I again pressed the doorbell, which was no simple feat as both my hands were full of pie containers and wine!  M-m-m-m-m-m, how did I push the doorbell?

Finally, the door opened, slowly, like the old TV show Inner Sanctum, without the squeaks.  Bill and Holly were cool, casting their beady little eyes left and right looking for “my friend”.  They were quite pleasantly surprised when Miss Mary stepped from behind me and said, “Hello!”.  I am sure I heard a sigh of relief in stereo. Holly got one of her ear-to-ear smiles, and we all laughed!  I did hear Bill say something about, “I will get you later!” 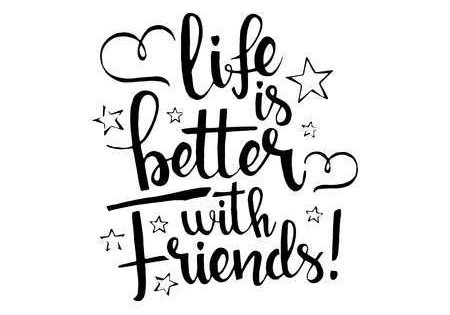 They opened up the evening with a margarita big enough to take a bath in.  Then we proceeded to have three beautiful hours of dining and chatter about anything and everything!  Those things that never happened were sure a lot of fun!

Mary seemed to enjoy the visit and had great tales to tell.  Mary and Bill had a super visit, Holly and I made the mistake of being closest to the kitchen, so we did the serving. 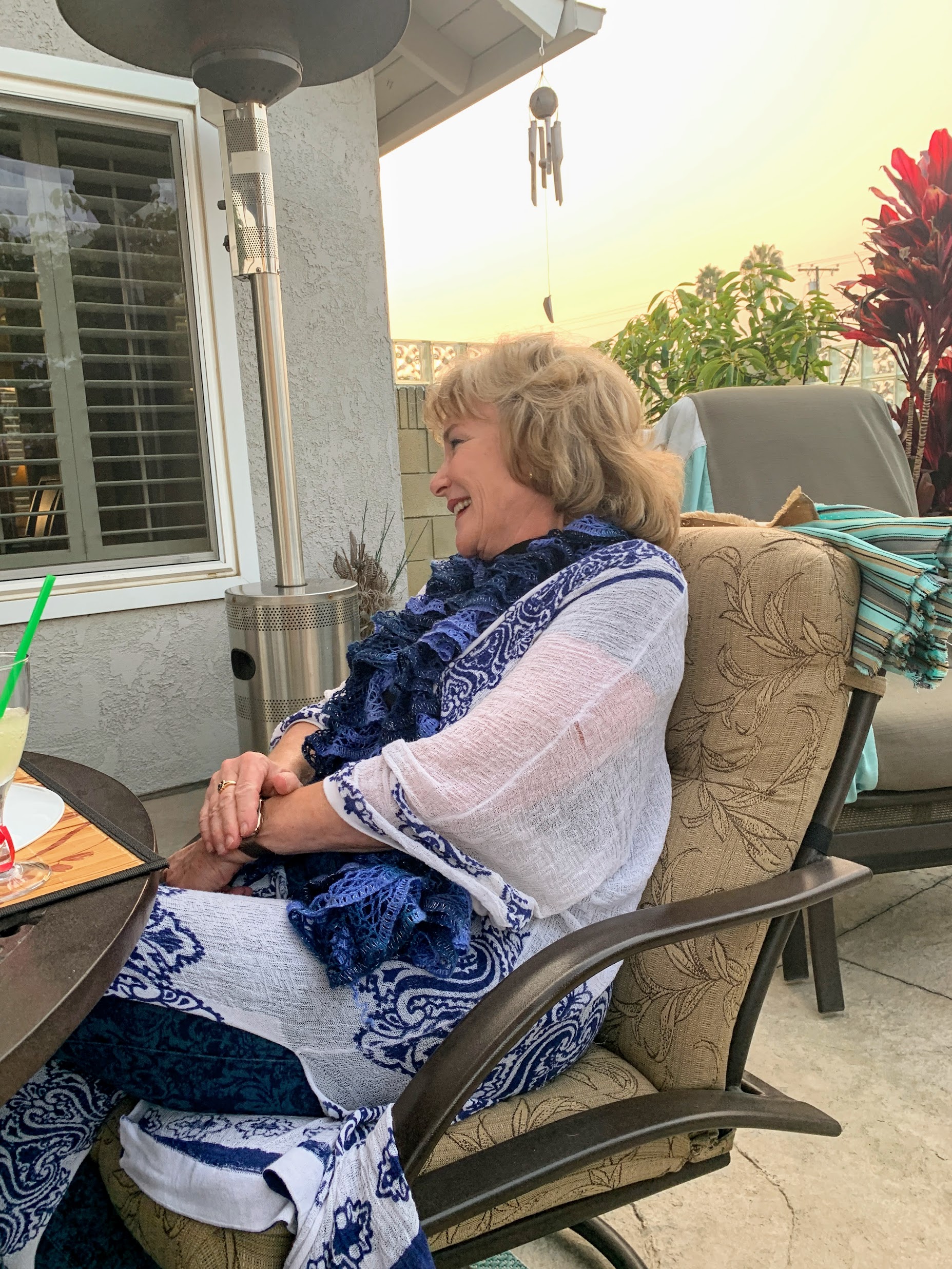 Holly was resting up for the formal dinner, where she made eighty-two trips back and forth to the kitchen. 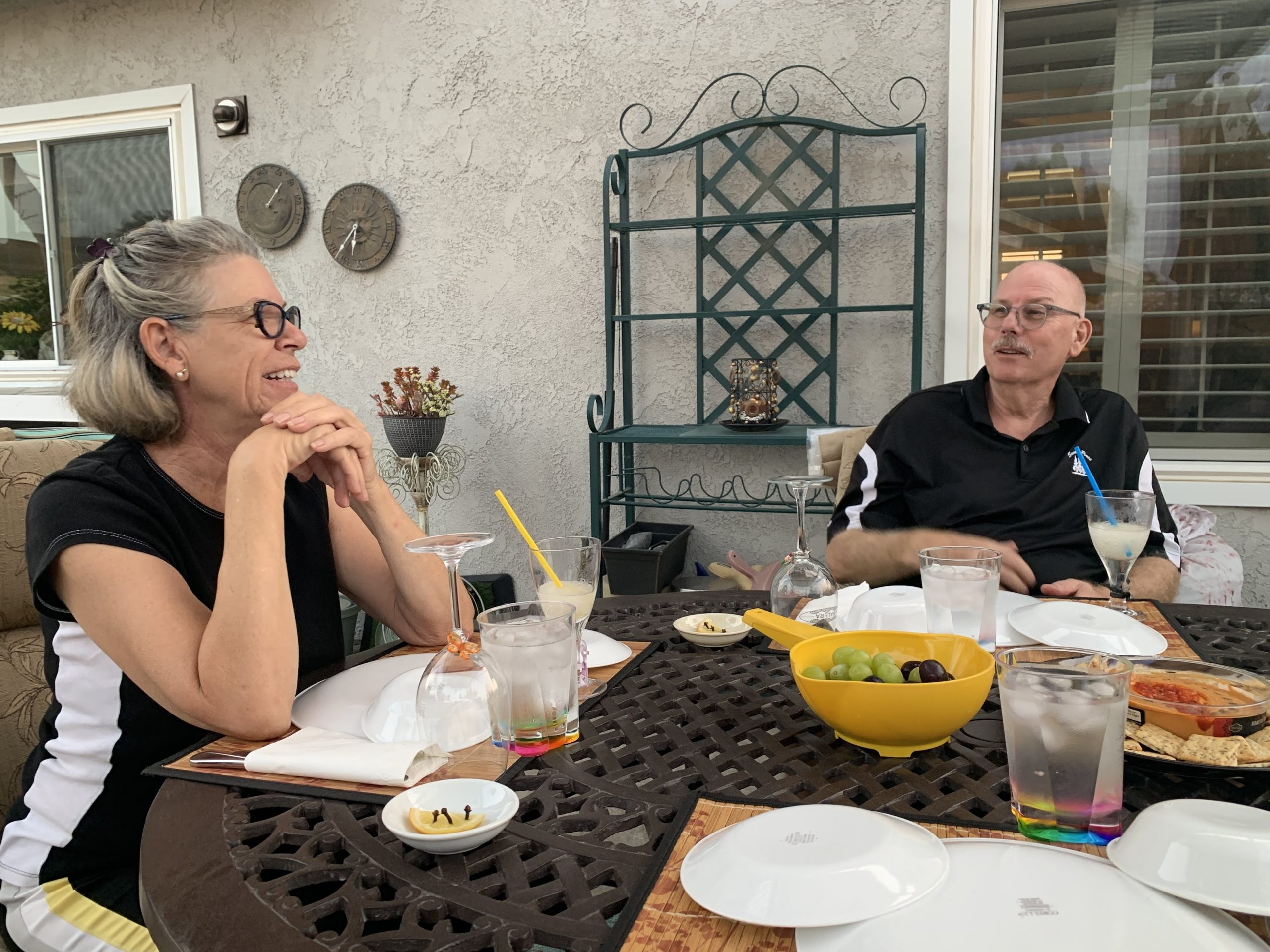 Our hosts were magnificent; Appetizers, margaritas, snacks. I was half full before we got seriously started.

Our hosts were terrific.  We had a ton of food, and the ribs were spectacular.  The type of ribs was unknown to me as Bill mumbled something about “roadkill specials”.  We had salads and music-less beans, or so Holly said.

“It’s not what we have in life, but who we have in our life that matters.” 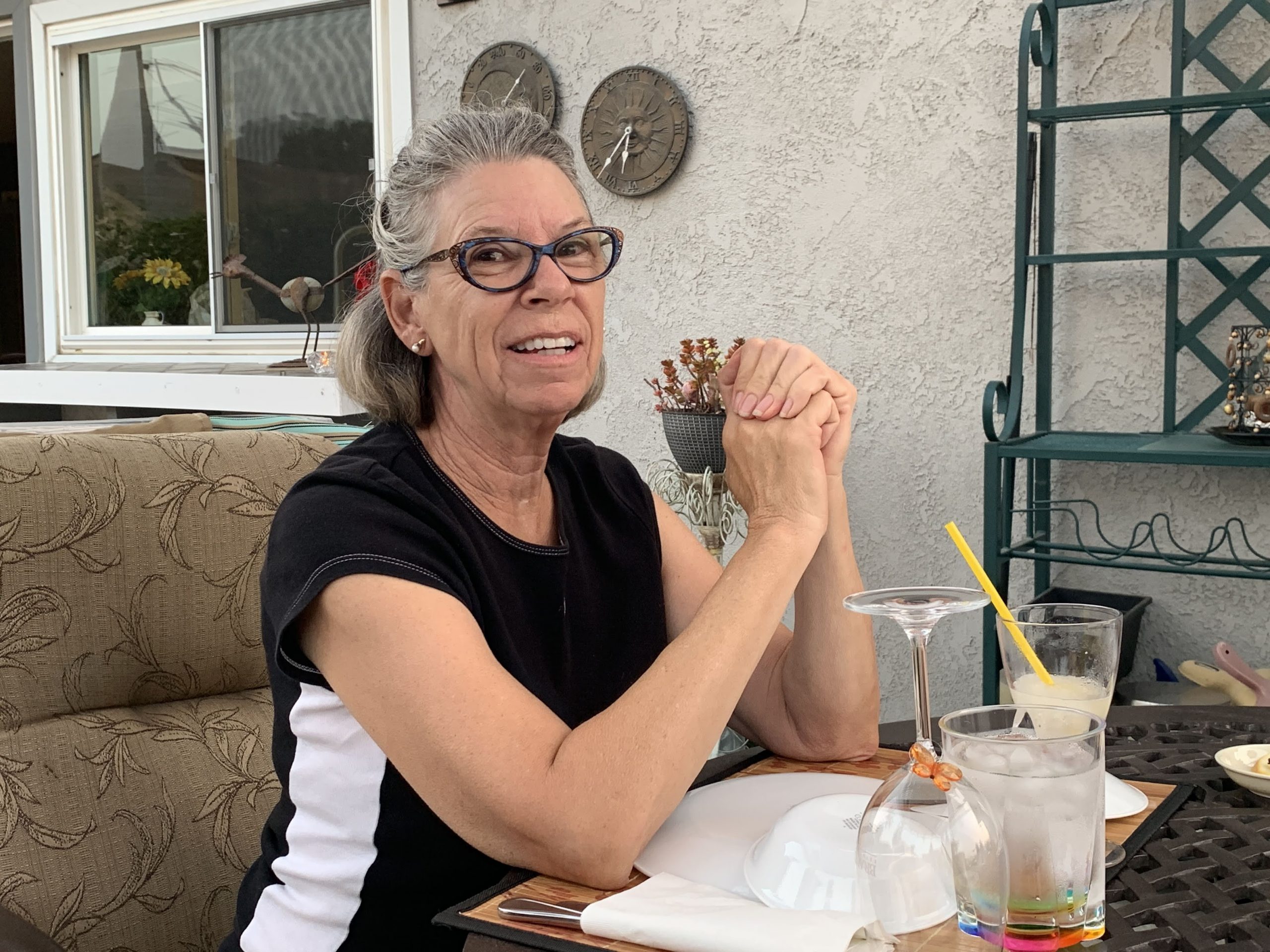 Holly was amazing, as usual!

That was a margarita in front of Bill, and he was able to down it in three seconds without getting a brain freeze, and we know why! Yep!  You can’t freeze anything that is not there in the first place! (I will pay for that one!) 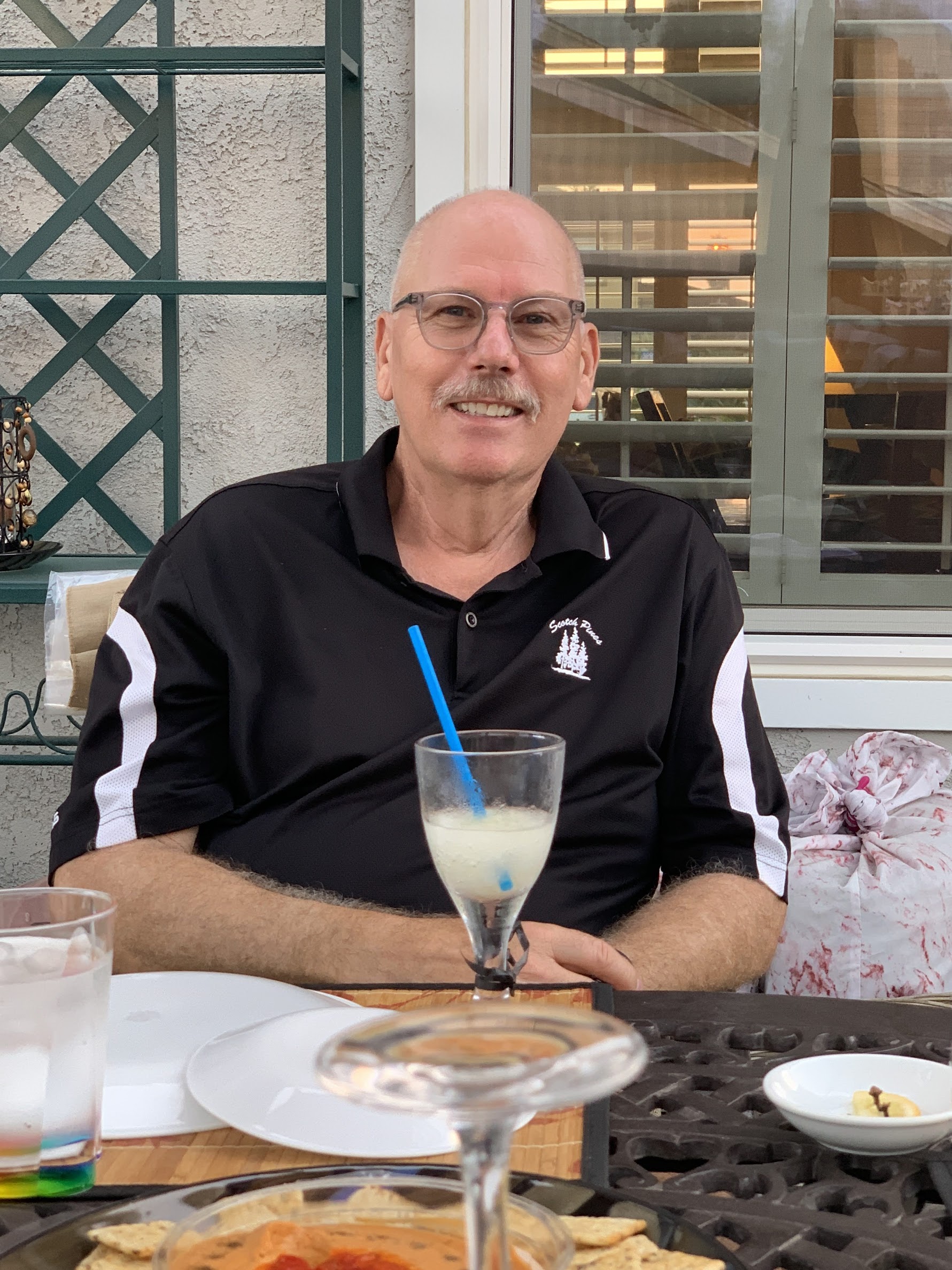 Bill and Mary chattered while Joly and Bill prepared the dessert!

“Life is partly what we make it, and partly what it is made by the friends we choose.” — Tennessee Williams

Being out with dear friends and sharing is so relaxing.  I laughed and giggled all night long.  Even my wrinkles had wrinkles tonight.  We shared the times in Catalina at the Avalon Ball and the “Swinging And Swearing” sessions on the golf course. 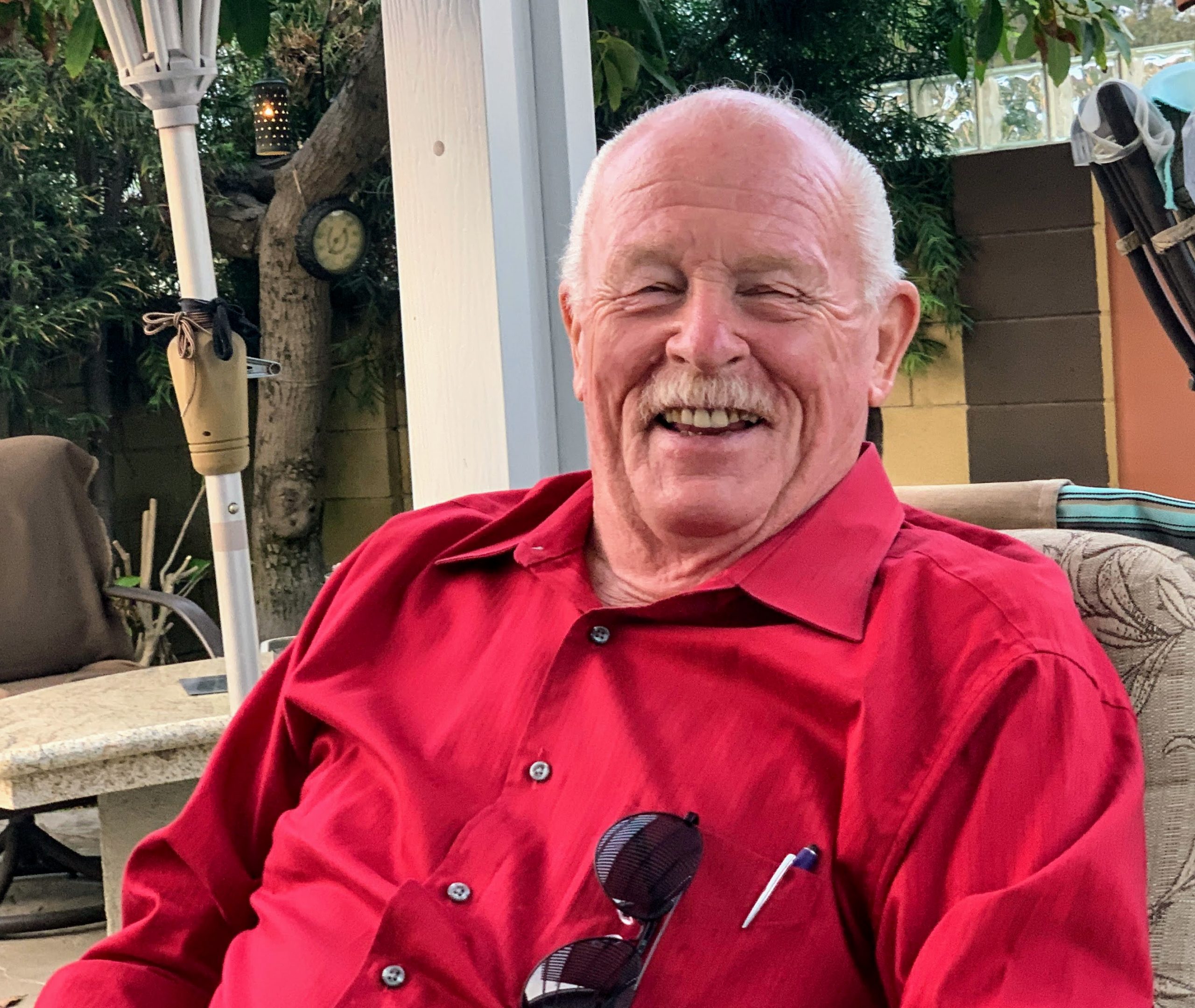 Someone was having fun!

Being with Miss Mary is always delightful but seeing her interaction with mutual friends was special for me.  We both told stories, regaled about times gone by, and looked to the future. 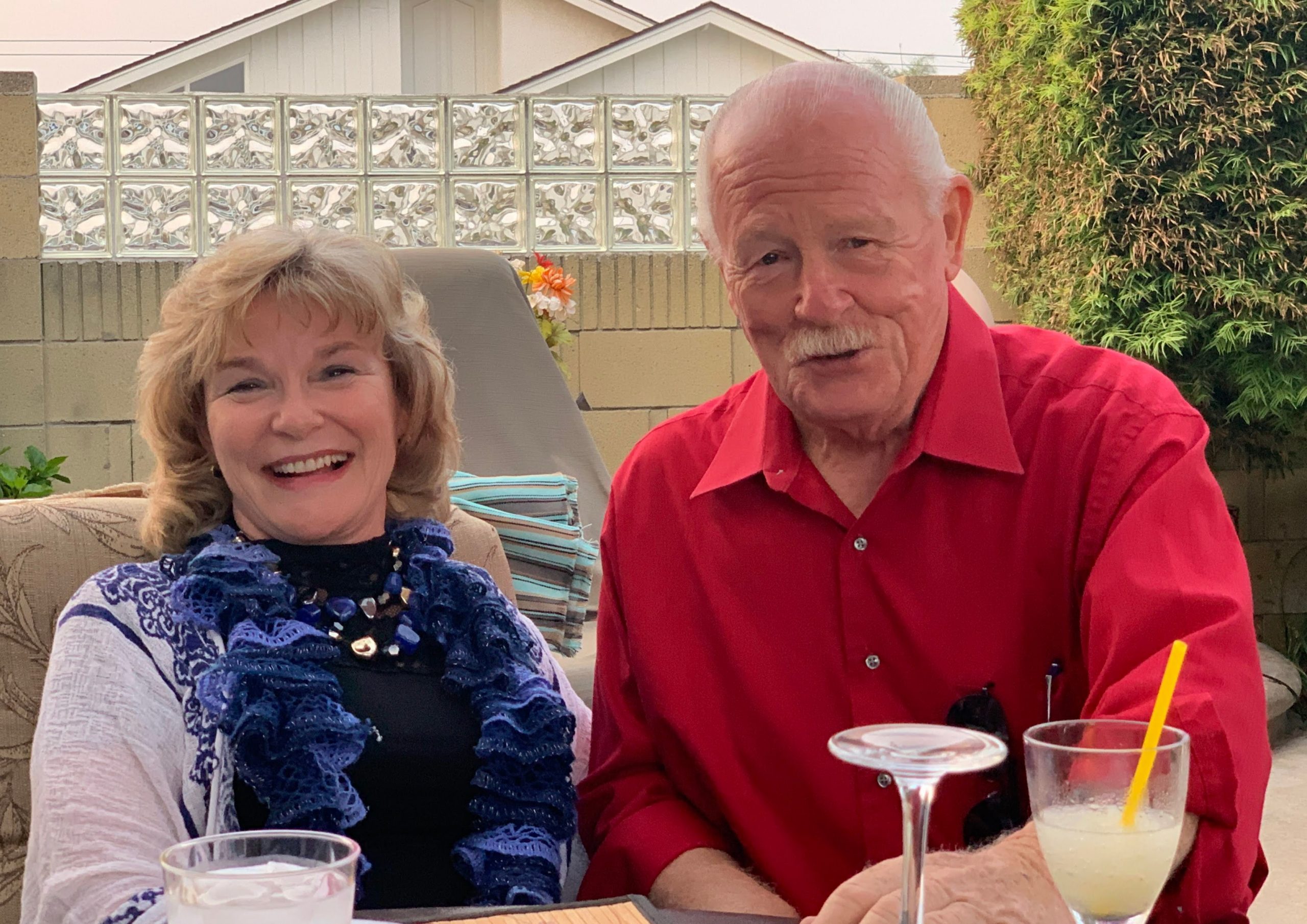 We were enjoying ourselves!

Telling a story is often dangerous, especially if my filter is off!  And contrary to popular opinion, I never embellish on a story; well, almost never. 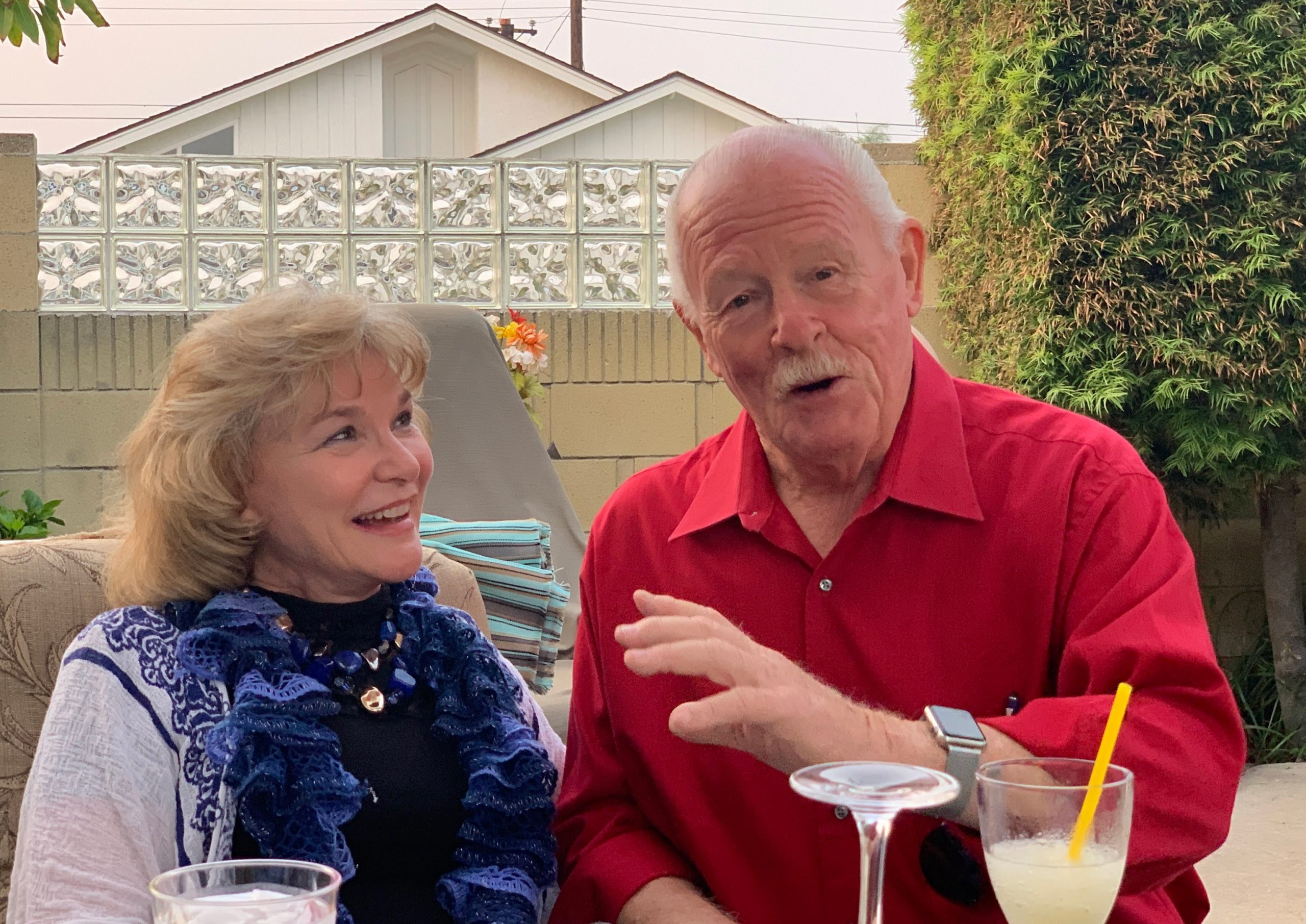 So lovely to have amazing friends.

After dinner, we cut into the pie, and Holly, in her infinite wisdom, added ice cream to the pie.   I could feel the calories lurking their way directly to my tummy.  I secretly did an anti-calorie incantation, and tomorrow we will find out of it worked.  Either that or I will again remove the batteries from the bathroom scale for a few days.

We stayed until 9:00 PM and then quietly left as we saw a) the stack of dishes we created, and b) the meter was still running!    We had such a wonderful time. 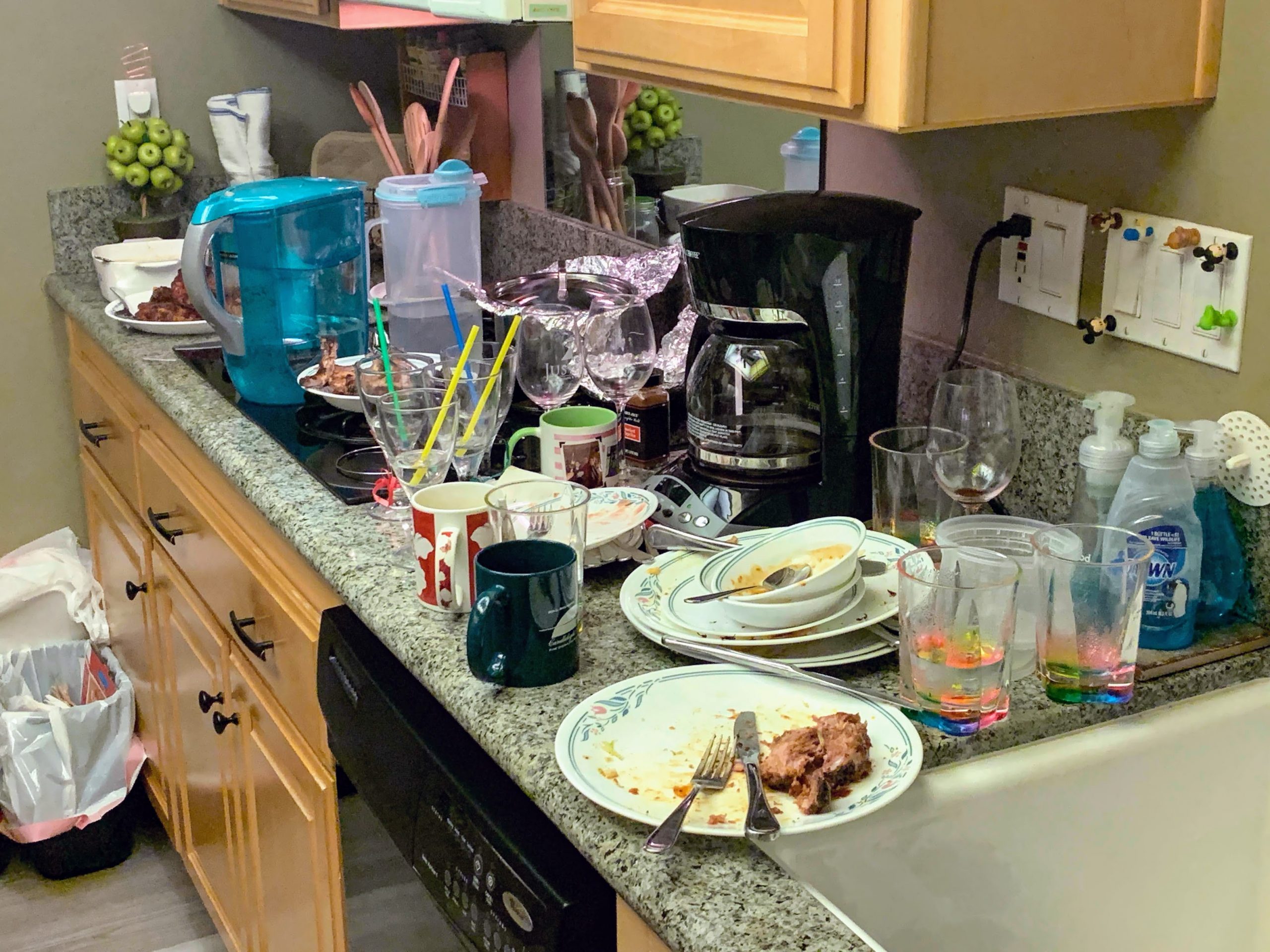 We snuck out before the dishes were done!

Mary went east, and I went west, and we will see each other tomorrow as we are having dinner with Zack and Becca tomorrow at Patty’s Place.  Mary and I talked for a bit after we got to our respective abodes.  It was an amazing evening.

Just an old retired guy trying to finish out my last years on this planet loving my best friend and wife, having fun, learning, and passing on helpful things to others.
View all posts by Paul →
This entry was posted in Food and Wine, Friends, Fun. Bookmark the permalink.

1 Response to It’s Tuesday, All Day!