Sunday At The Beach

Atheism is a non-prophet organization.

The weather is getting a little cooler, and the humidity is finally going away.  I passed through the house this morning doing a little straightening up, and then I watered the garden.  The garden is doing pretty well, especially the watermelons and pumpkins.

The Grey Ghost and I went to visit Mary, and we watched Charles Stanley’s morning sermon, which I thought was a pretty good message.  I like the fact be sticks to basics.  Mary made breakfast, and after the show, we decided to take her baby to the beach for a walk.

We took her truck since it has a doggy seat belt in the back seat.  The island was busy, and we made the correct decision NOT to take the ferry as it was packed.  It was funny to have a chauffeur and I got to see things I never would while driving. 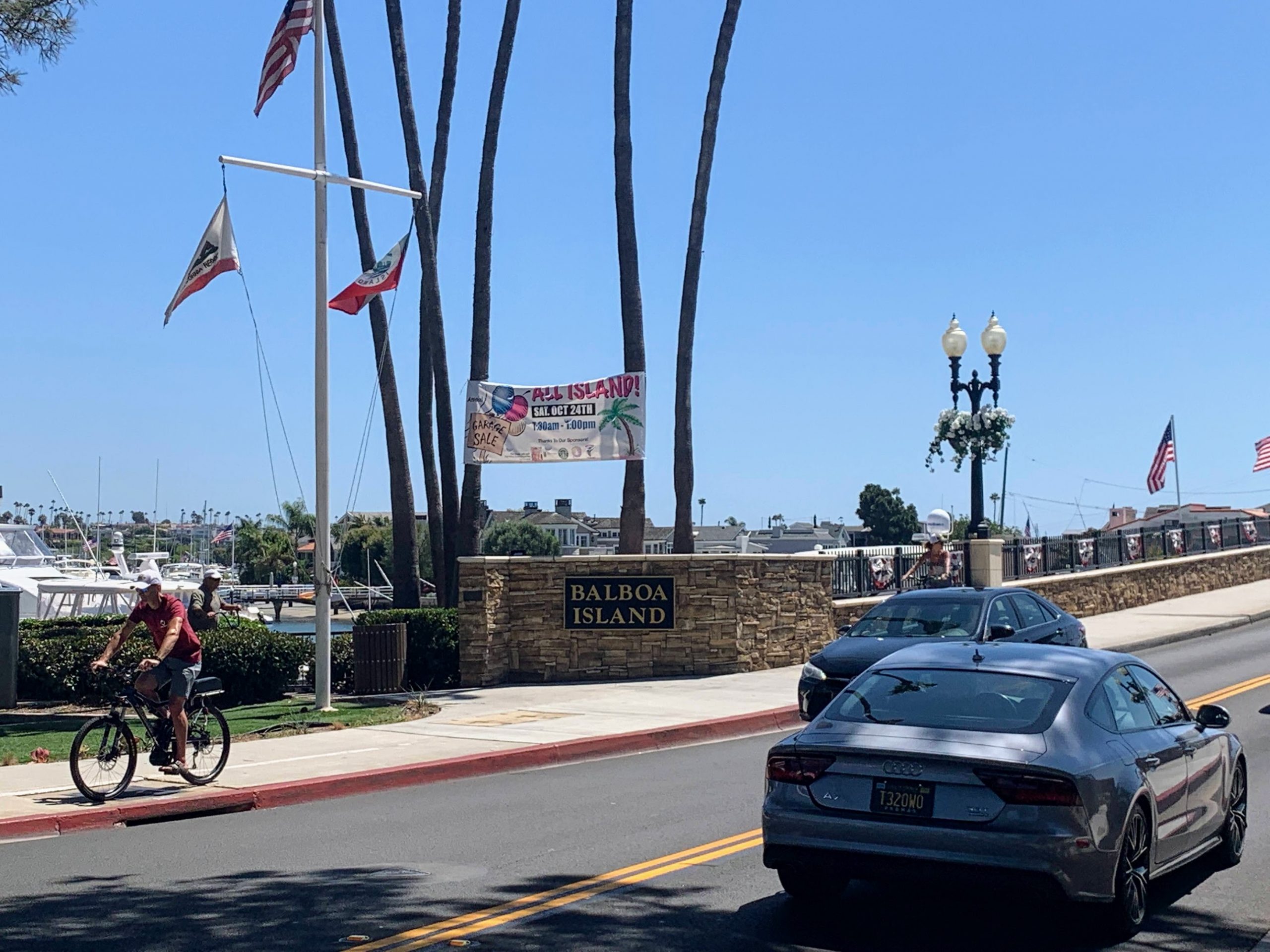 We parked about a block away from the bridge and walked onto Balboa Island.

We walked the entire outer perimeter starting at the bridge.  The pathway was excellent and it even had provisions for wheelchairs making Scout’s walk easier. 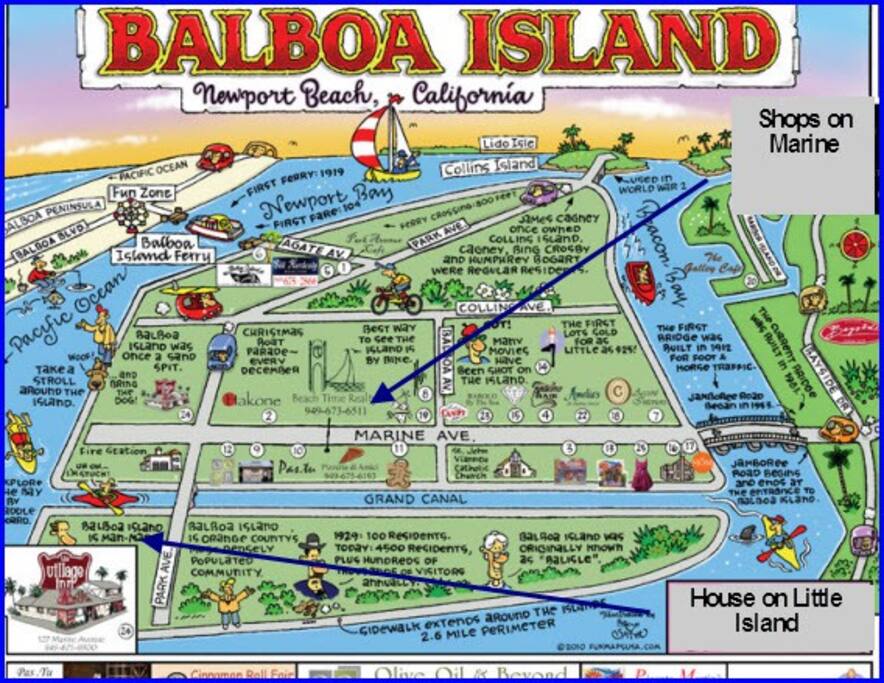 It was a perfect walk for a Sunday afternoon.

Today was picture perfect with few clouds in the sky and a warm breeze wafting across the calm waters. American flags were flying everywhere, and we even saw Miss Liberty gazing out onto the waterway. 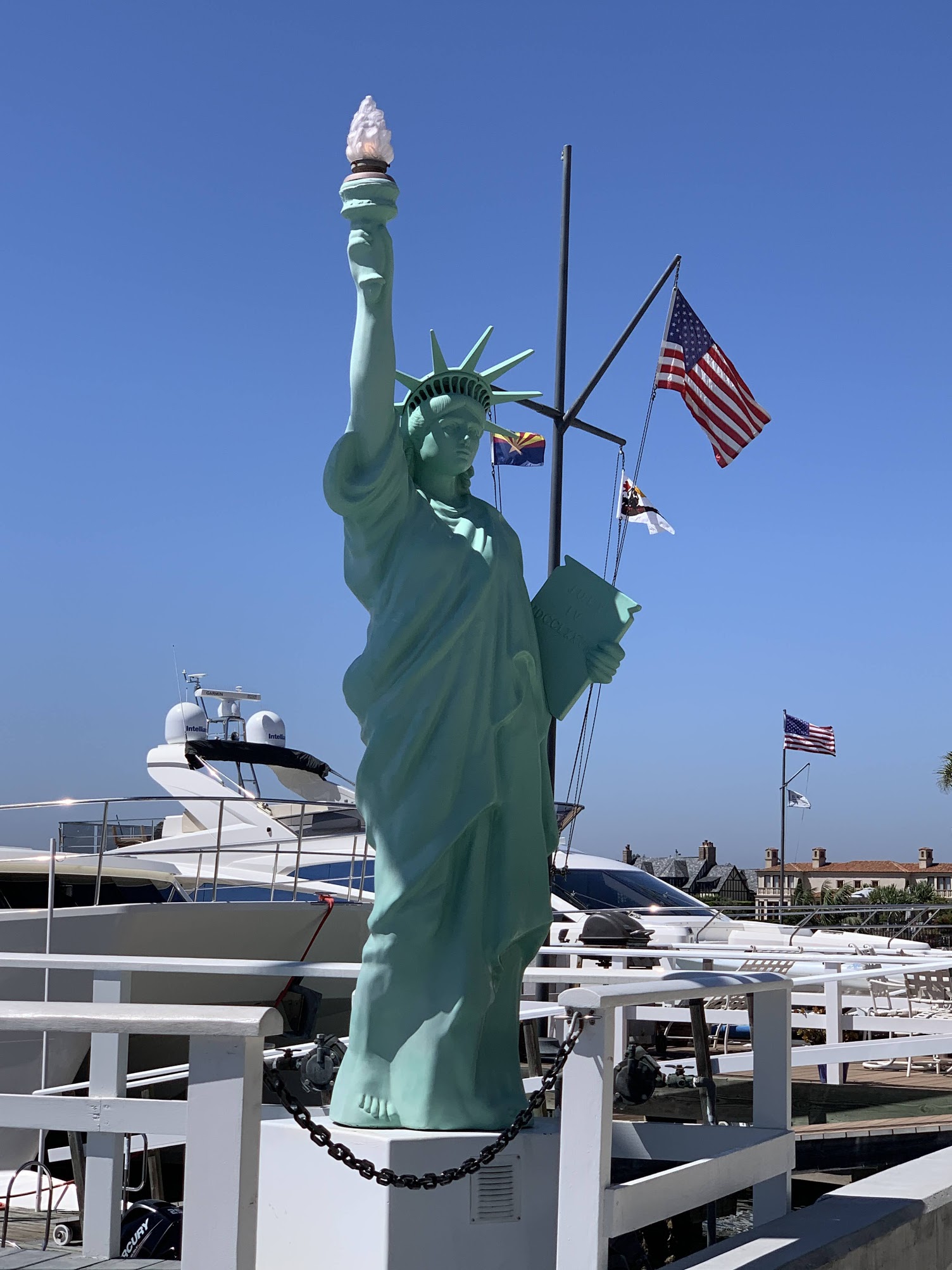 She was looking good today!

There were loads of people on paddle boats, kyacks, and other sorts of water transportation devices.   The people were amicable, and we also got to meet some of Scouts’ new acquaintances. 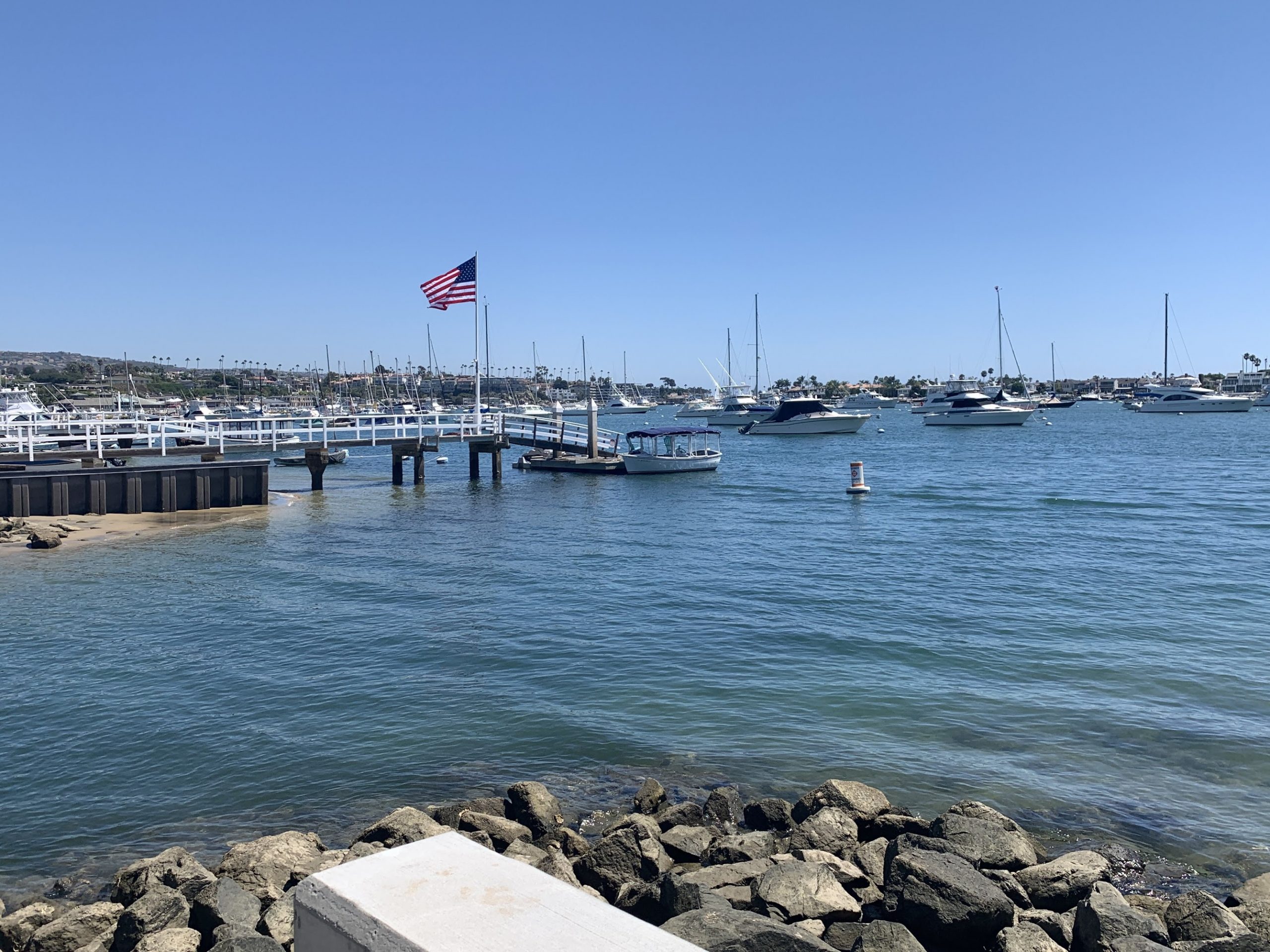 The could not have had better weather!

Scout was a happy camper as he got to mark many many spots as we circumnavigated the island, plus he got to meet and say hello to the locals. 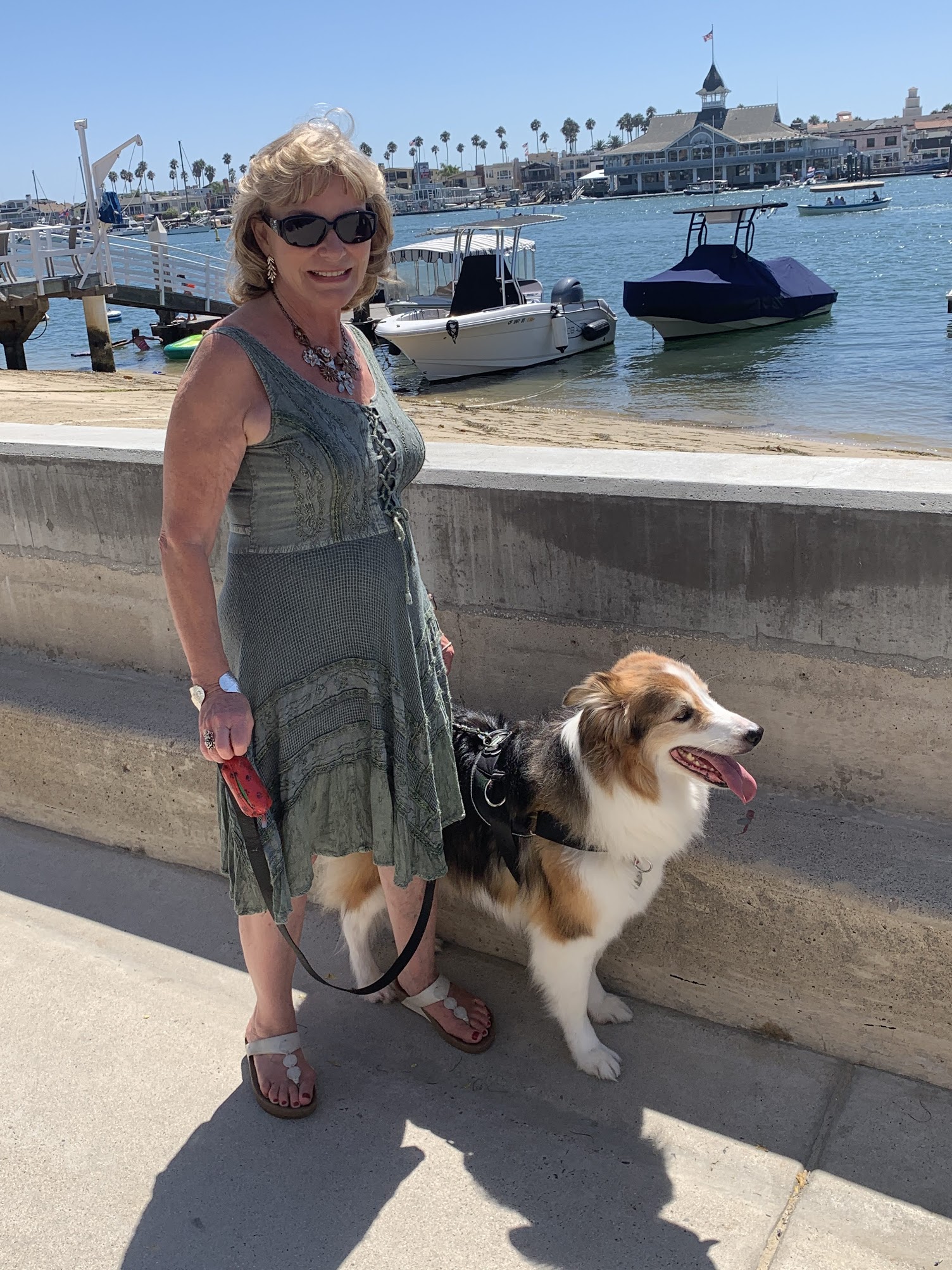 Mary and Scout enjoy walking.  We did about 2.5 miles.

We walked out on a public mini-pier and sat, enjoying all the activities.  I forgot my hat today, and Mary offered hers to me.  It probably saved me from sunburn.  A few minutes later, we found a small store, and I grabbed a new hat, which I shall keep in the car!  Scout and I get along just fine although he was not too sure about the hat situation! 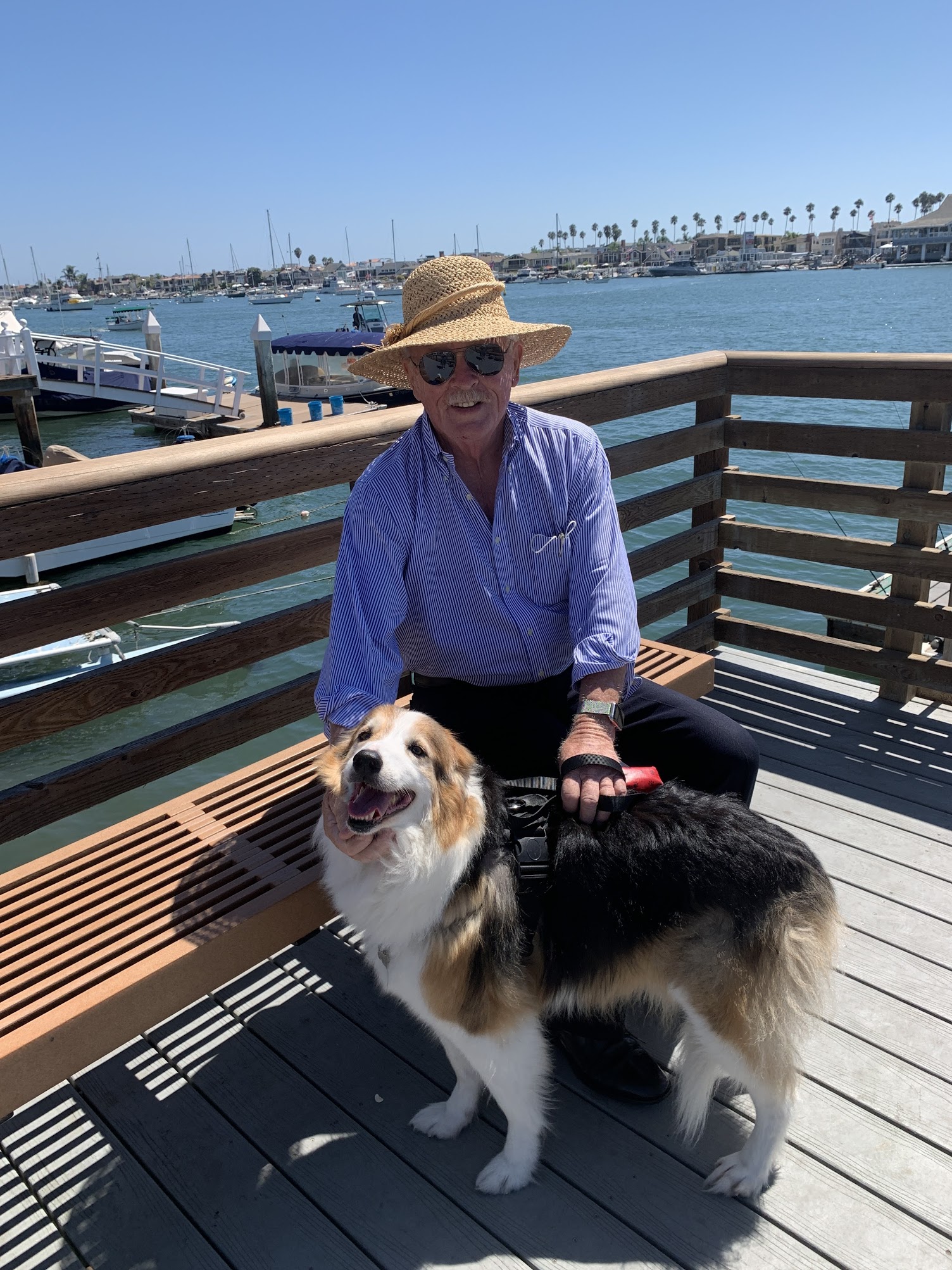 Poor baby was getting tired at the end of the walk.  He was pooped-out on the way home and laid down in the back seat.   We stopped at the American Legion, but no doggies were allowed, so Mary suggested a snack and a glass of wine at the Greenleaf, which sounded terrific. 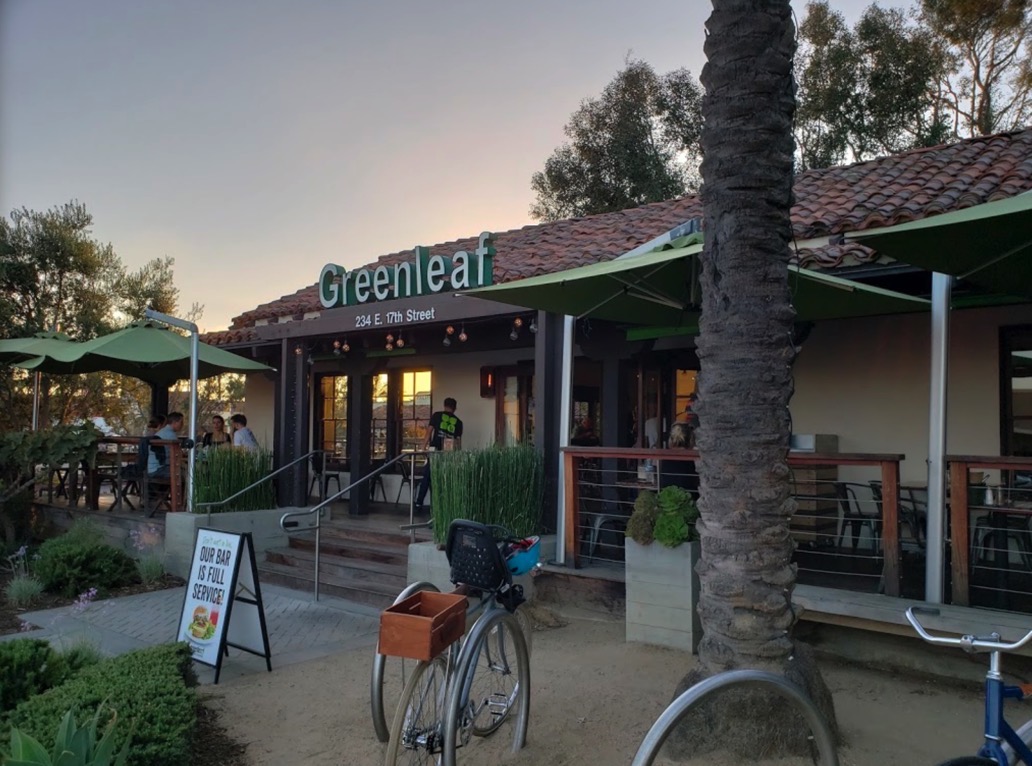 It is located on 19th street just off Newport Boulevard.

The Greenleaf is known to be dog friendly, so Scout got to stretch his legs and get a cold bowl of water.  We had a bowl of hummus mixed with avocado making an interesting dip for the crackers.  It was quite tasty! 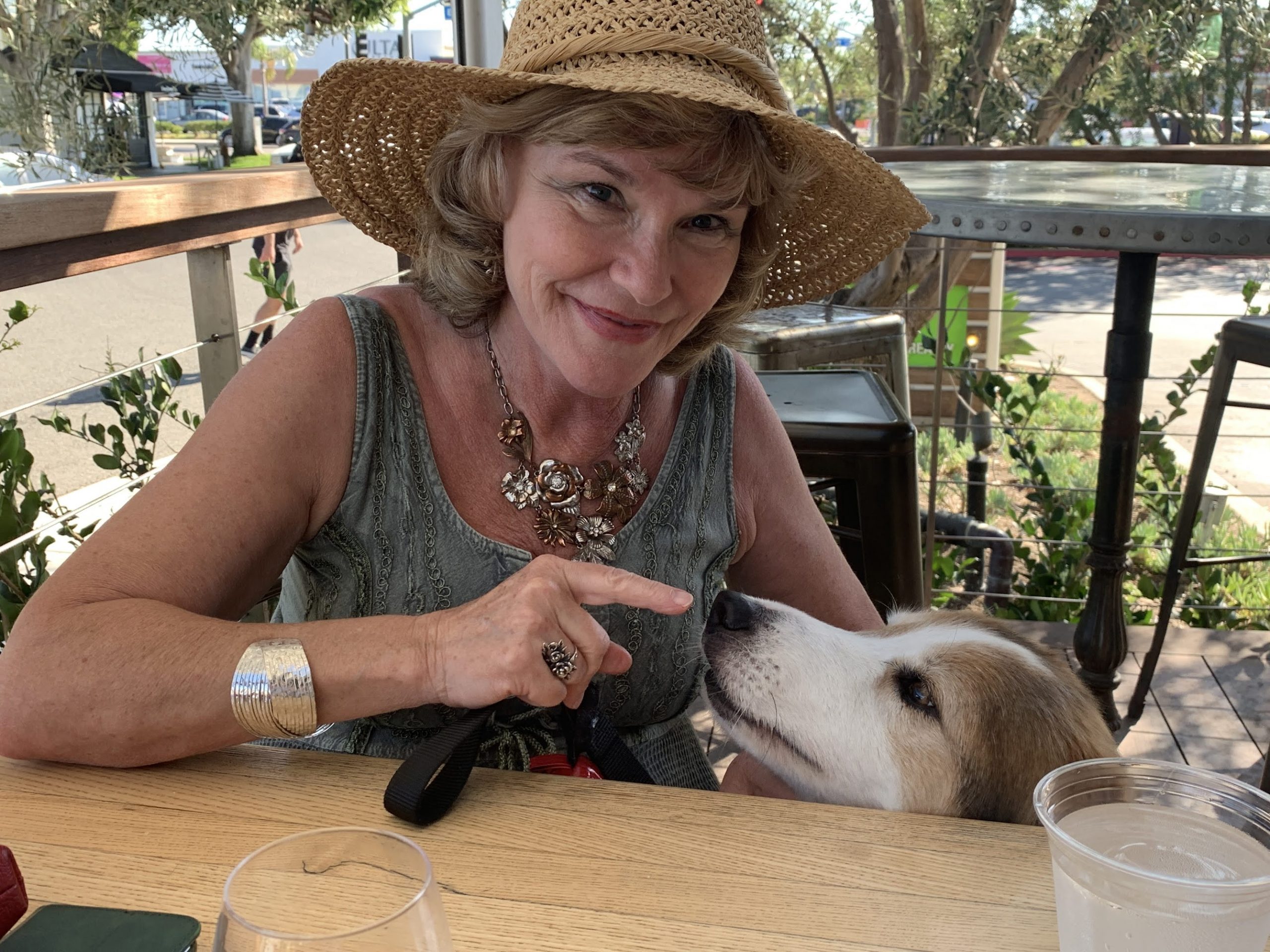 We departed Balboa and stopped in Costa Mesa for a snack and a glass of vino.

After returning to Mary’s, she decided to cook dinner, especially after I offered to help.  Working in the kitchen can be a lot of fun.  I prepped the peppers using tricks taught me by Sue.   Mary made the stuffing which was fantastic.

There were a lot of memories going on in my head while I worked alongside Mary.  It was almost like what Sue and I would do in the kitchen. We both watched and learned new things as the dinner making activity progressed.  Mary learned a pepper softening trick and how I cut the artichokes and I learned that one can put a combination of spices into the artichoke pan when they cook plus use some oil to brighten up the leaves.

We also prepped some artichokes.  It is fun to work together in the kitchen and attempt to anticipate how to help the other person.

There were plenty of stuffed peppers, which turned out magnificently by the way, so we called Jan M. and told her to expect a “Meals On Wheels” delivery!  She was tickled at the offer and the pièce de résistance was offering her an artichoke! 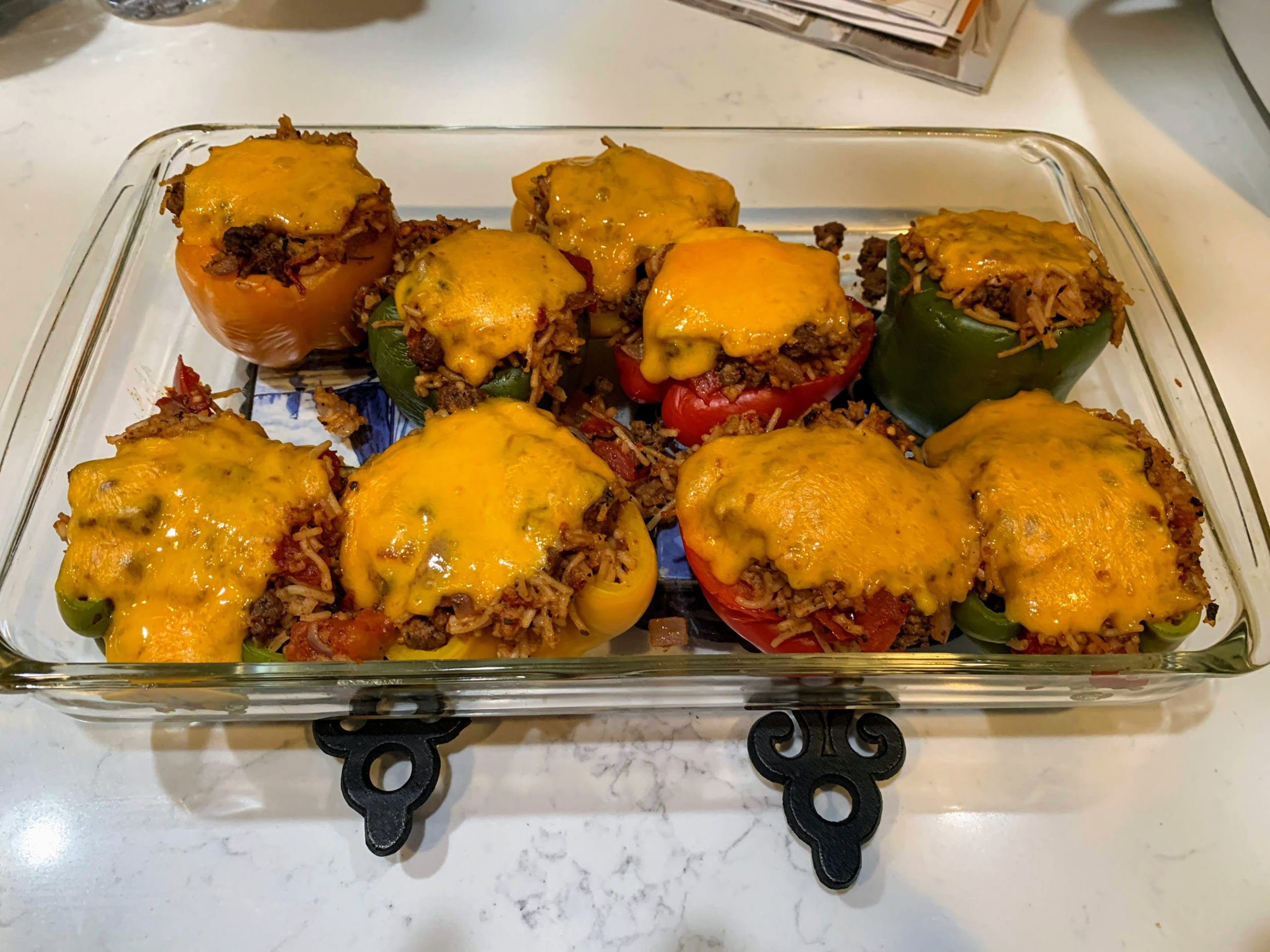 She decided stuffed peppers would be a good choice for dinner, and I pitched right in.

During dinner, we watched a great movie, Rooster Cogburn. Two of the most popular stars in movie history are brought together for the first time in Rooster Cogburn, the adventure-filled follow-up to True Grit. The legendary John Wayne reprises his role of the eye-patched, whiskey-guzzling U.S. Deputy Marshal that won him an Academy Award.

Katharine Hepburn joins him as Eula Goodnight, a missionary who pairs up with the grizzled gunfighter to avenge the death of her father. While in pursuit of the outlaws, a tenderhearted relationship develops between the rough-and-tumble lawman and the flinty reverend’s daughter as they join forces to secure justice in the untamed west.

Watch the trailer, it is only ninety seconds long.

After the movie, the Meals On Wheels Van headed to Jan’s, which was on my way home.

I sat by the dining room table looking at the pool lights change color, had a hot cup of black coffee, and thought a lot about today and a lot about Sue and thanking her for teaching me so much about life.  I miss her so very much, but I remember what she told me as her health was declining over the past couple of years. She was amazing and she was quite correct, life must go on! 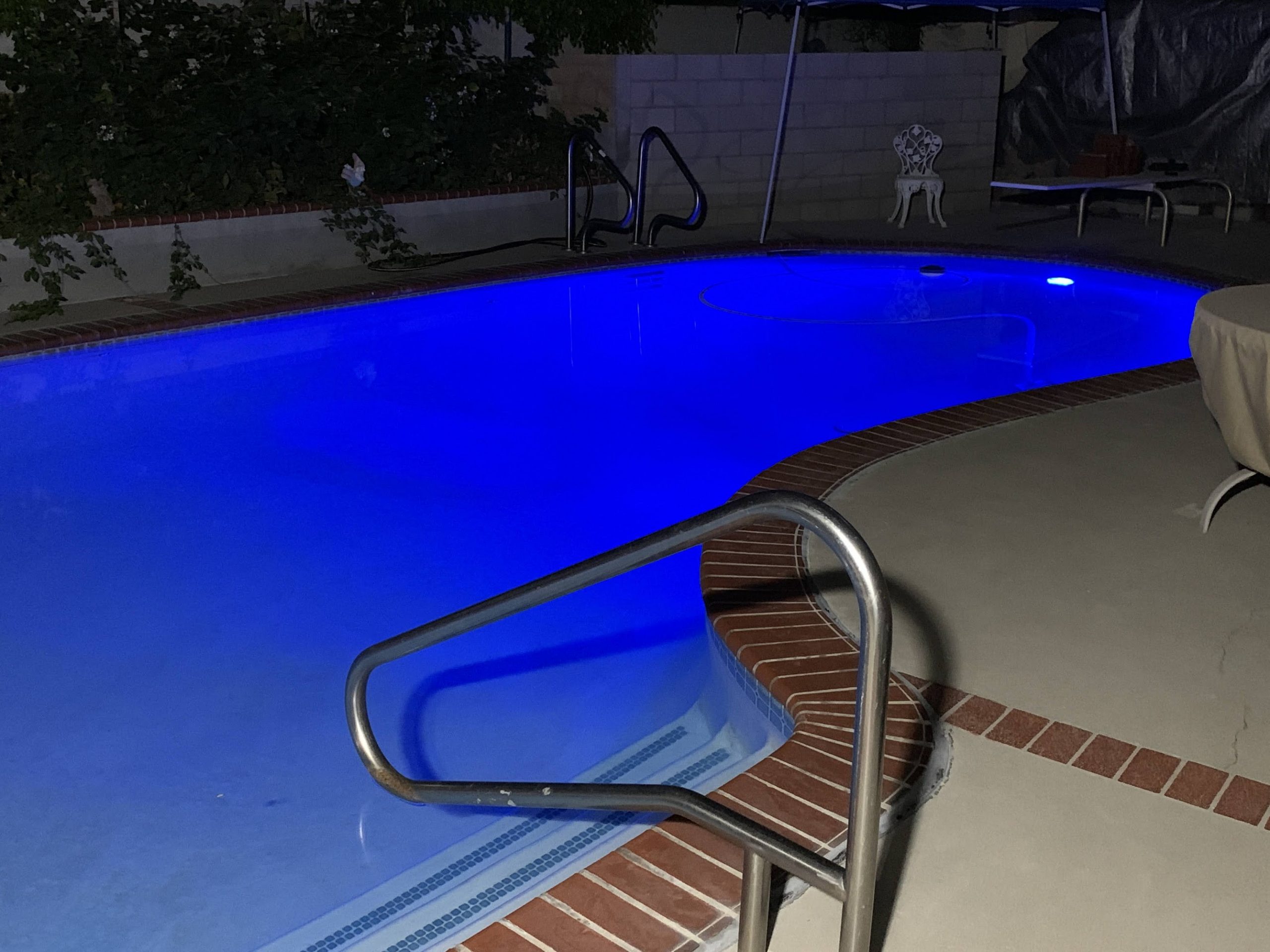 Home again home, it was a lovely day!

Just an old retired guy trying to finish out my last years on this planet. I lost my best friend and wife in early 2020. I was blessed again by reconnecting with Dr. Mary Côté, a long-time friend. Mary and I got married July 28th, 2021, and are enjoying life together and plan to spend the rest of our lives being a blessing to our friends and family.
View all posts by Paul →
This entry was posted in Adventures, Food and Wine, Friends, Movies, Walking. Bookmark the permalink.