Get Stuff Done; I Did!

We just spent two days in Catalina and attended the Avalon Ball on Saturday night. We had been going since its inception about fifteen years ago.  We had about seven other couples with us and, as usual, had a wonderful time filled with friendship.

It was challenging to think about not going this year with the loss of my fantastic Sue, but I believe the pandemic helped ease the loss because we all stayed home.

Beautiful memories were made in Catalina, and Sue was the highlight. 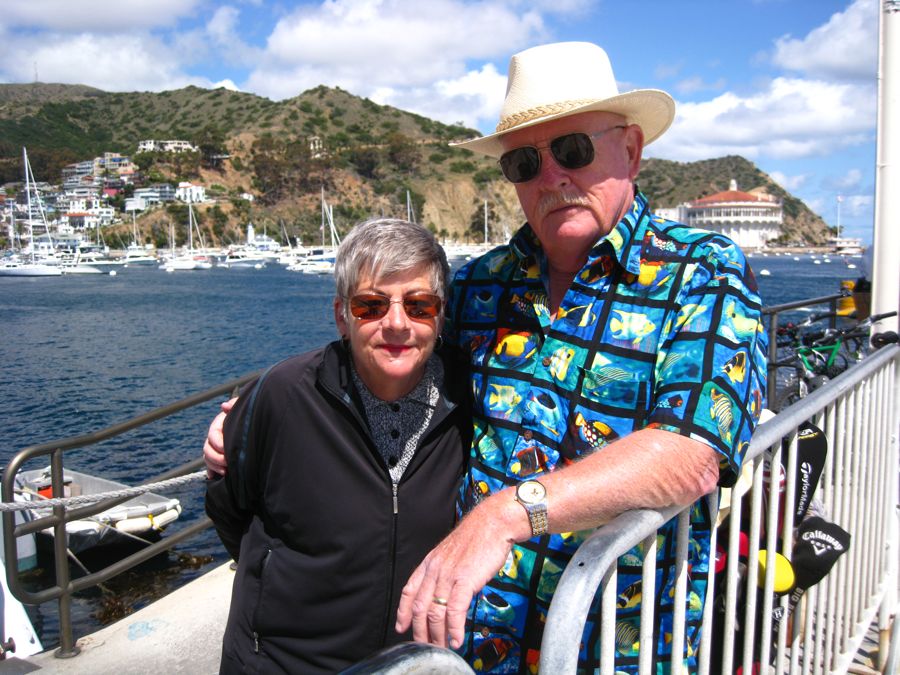 What a difference a year makes!

The nice sweet little old bathroom scale snuck me in at under 190 pounds this morning but only by a hair.  I headed out to walk off last night’s shrimp cocktail and Empress 1908 drink. Today the coin-toss indicate south so south so I began to move as fast as my little 28″ legs could carry me! 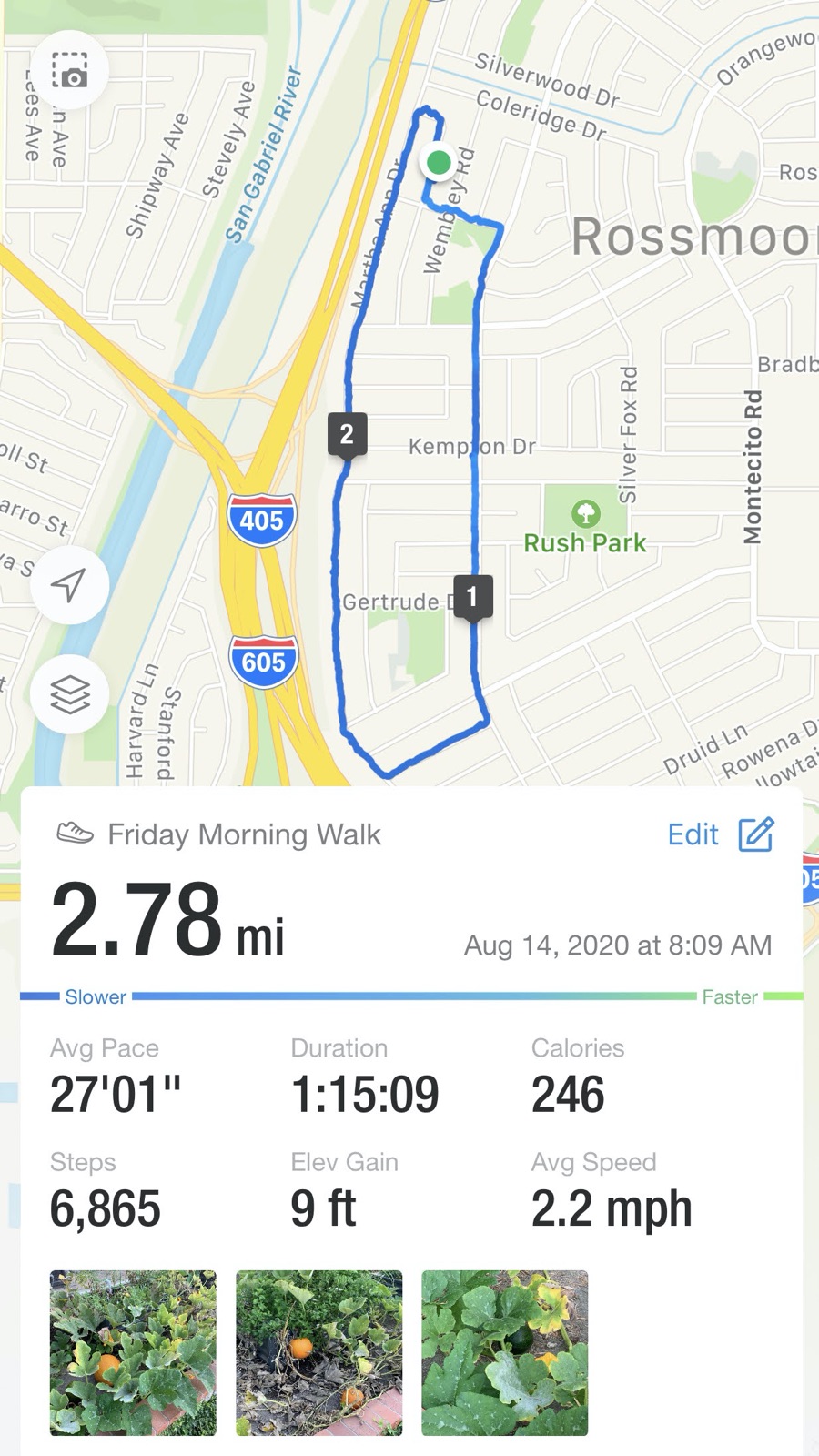 A pleasant walk this morning.

The first pumpkin of the season was spotted a few blocks away.  My pumpkins look a little the worst for wear, but perhaps they will catch up. 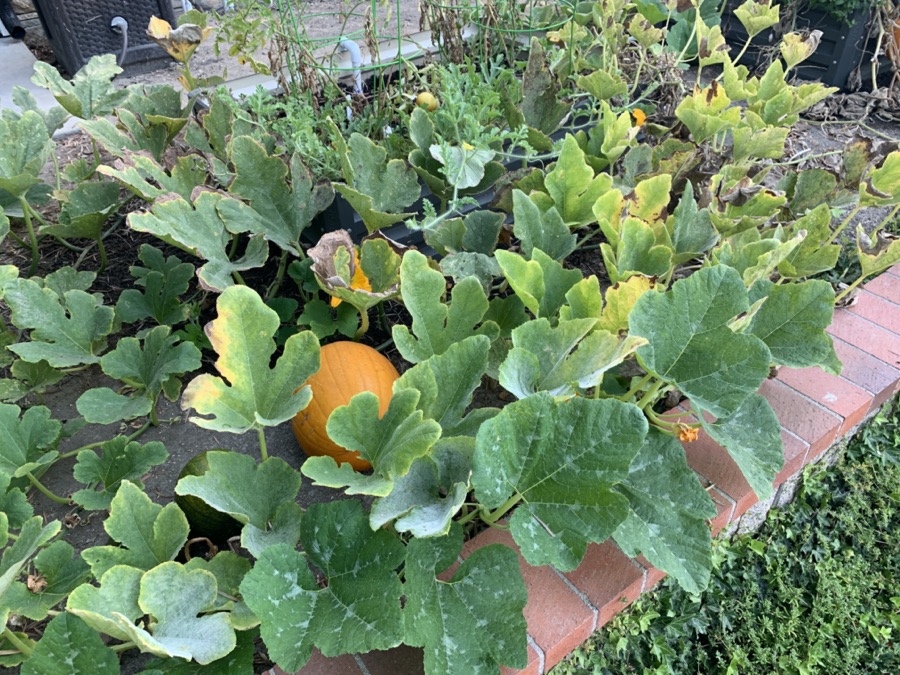 He will get more prominent as the summer goes on!

According to the University of Illinois, 90 percent of the pumpkins grown in the United States are raised within a 90-mile radius of Peoria, Illinois, which happens to be the home of Libby’s pumpkin plant. 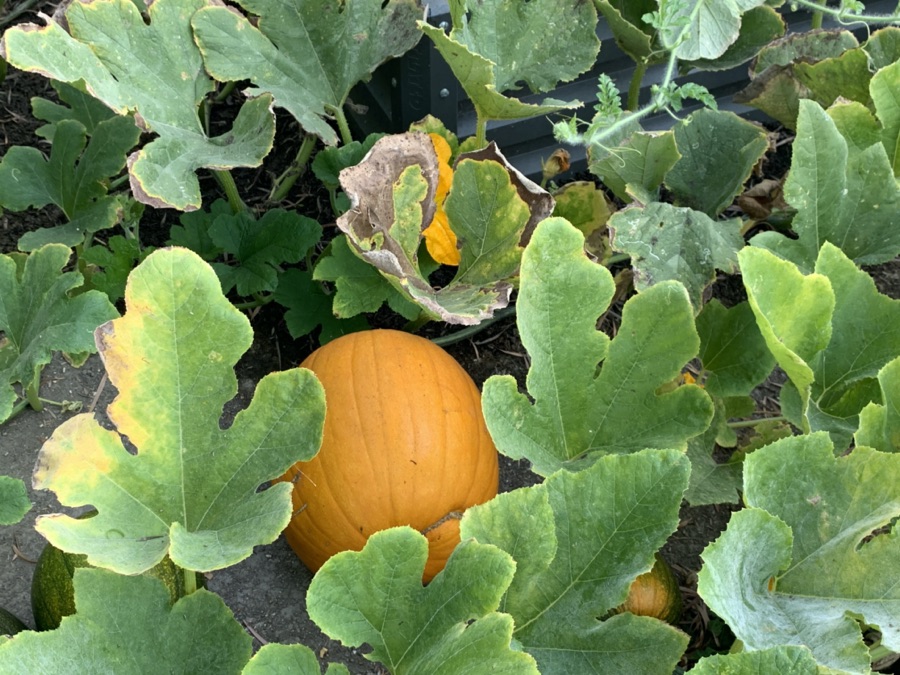 His little friend is about 10 inches across now.

The trees are beautiful this time of year. The sun makes them look like they are on fire from certain angles.  The shade they provide is fantastic! 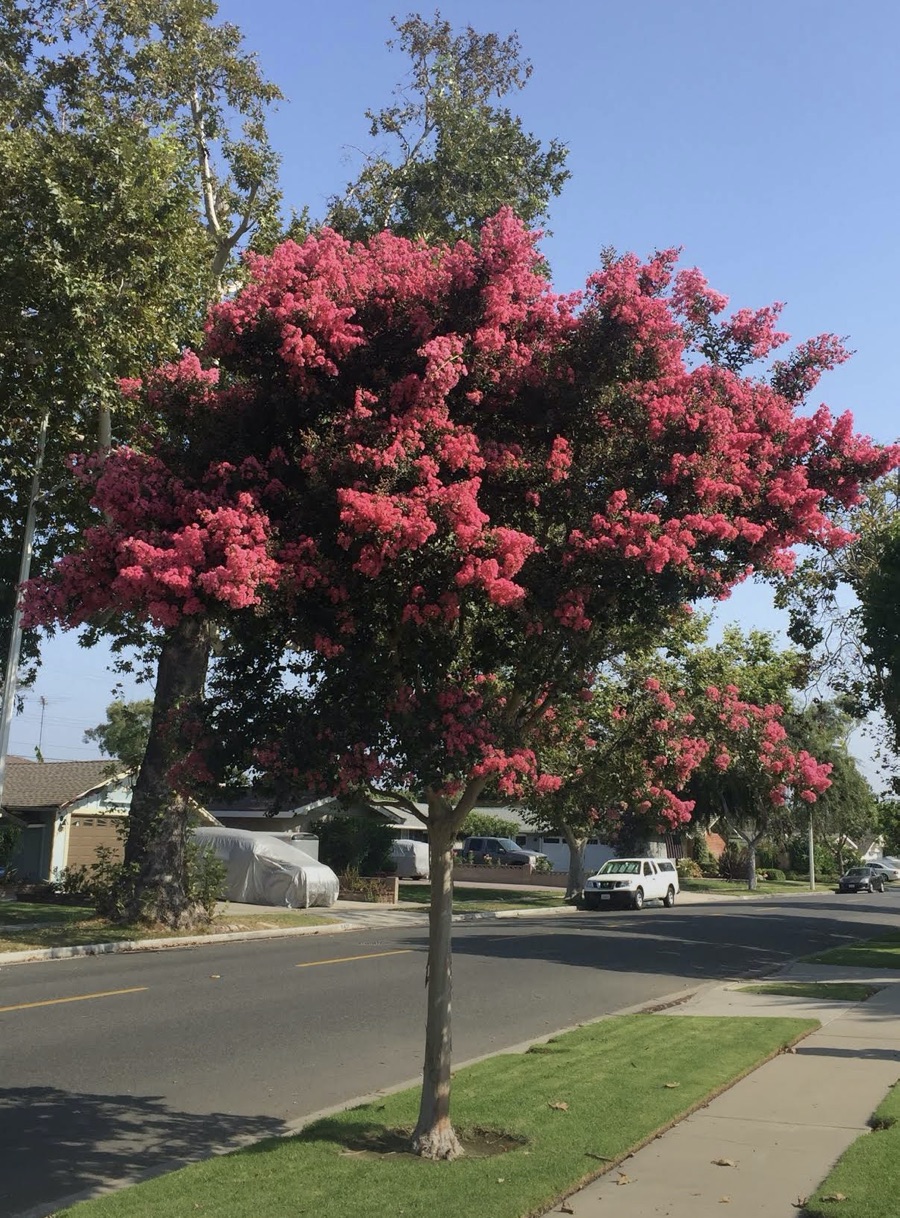 Poor old hot tub.  The tub was not used for years because of Sue’s condition, but I kept it with chemicals and changed the water every six months.  So, a couple of weeks ago, I got into hot water.  Say what?  I am always in hot water!!

Everything worked great for two weeks, then kaput; it did not heat up anymore.   Did it find me so revolting that it refused to heat?  I fiddled with everything I could see and decided an expert was needed.  A quick call to Long Beach Spa and $350 later, we are up and running.  When the tech came out and opened up the electronic panel, I could smell the burnt bakelite immediately.  There was something rotten in Denmark.

Did You Know? Bakelite (/?be?k?la?t/ BAY-k?-lyte; sometimes spelled Baekelite) or polyoxybenzylmethylenglycolanhydride was the first plastic made from synthetic components. It is a thermosetting phenol formaldehyde resin, formed from a condensation reaction of phenol with formaldehyde. The Belgian-American chemist Leo Baekeland developed it in Yonkers, New York, in 1907.

Bakelite was patented on December 7, 1909. The creation of a synthetic plastic was revolutionary for its electrical nonconductivity and heat-resistant properties in electrical insulators, radio and telephone casings, and such diverse products as kitchenware, jewelry, pipe stems, children’s toys, and firearms.

In recent years the “retro” appeal of old Bakelite products has made them collectible.

Bakelite was designated a National Historic Chemical Landmark on November 9, 1993, by the American Chemical Society in recognition of its significance as the world’s first synthetic plastic.

When it gets too hot, bakelite smells to high heaven!  I know the smell well as it was used in a lot of Ham Radio equipment. 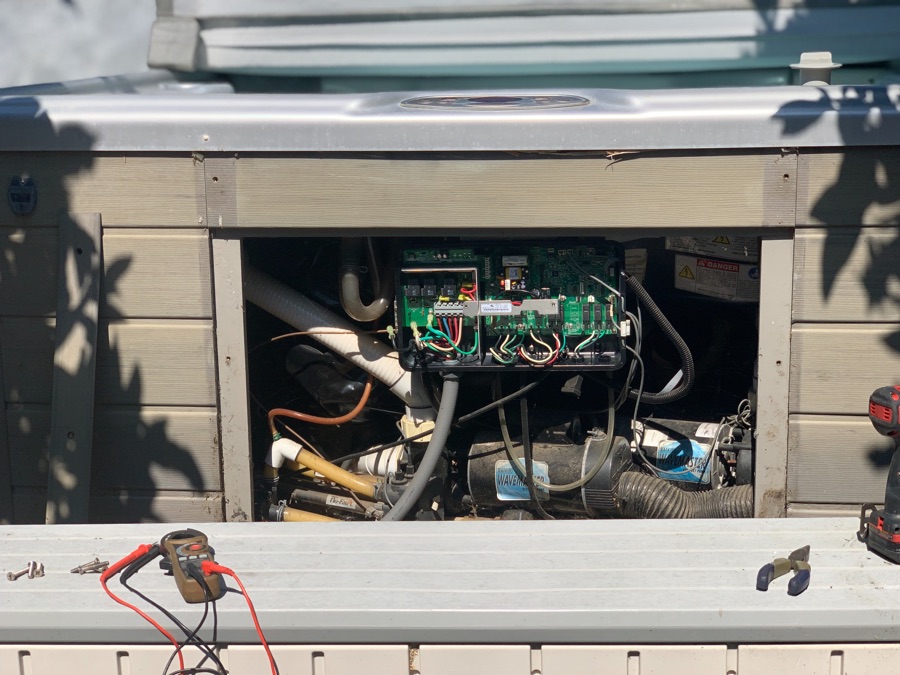 Fixed!  He had a replacement board in the truck!  Yeah!

The relay that controls the power to the heaters got stuck and overheated, as you can see below.  The relay went south, and so did all the current needed to run the heater.  Twenty minutes later, the board was replaced with a brand new one, and the spa is back in operation.  Hot tub tonight! 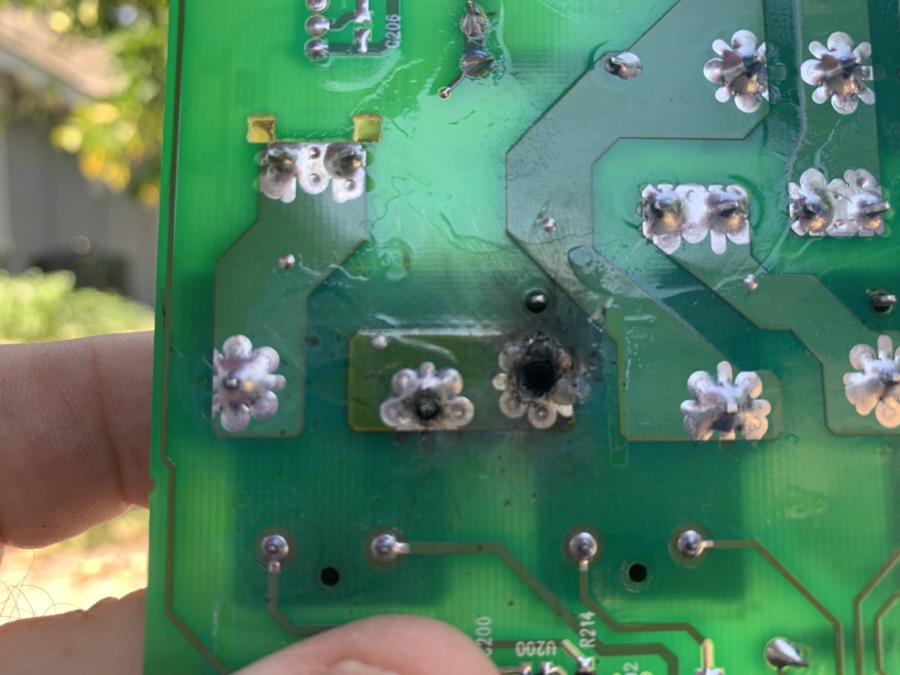 Since I was already a bit sweaty, I turned my attention to the power panel, and I drug out my air compressor and Kobalt Air Hammer.  A half-hour later, covered in dust, I had ripped away four inches of stucco from around the panel to show two inches of the original “chicken wire.”  With that done, Bob is going to paper and wire the openings, and I will call for a final inspection Monday.  Then the hole can be filled, pictures taken, and the back wall painted. 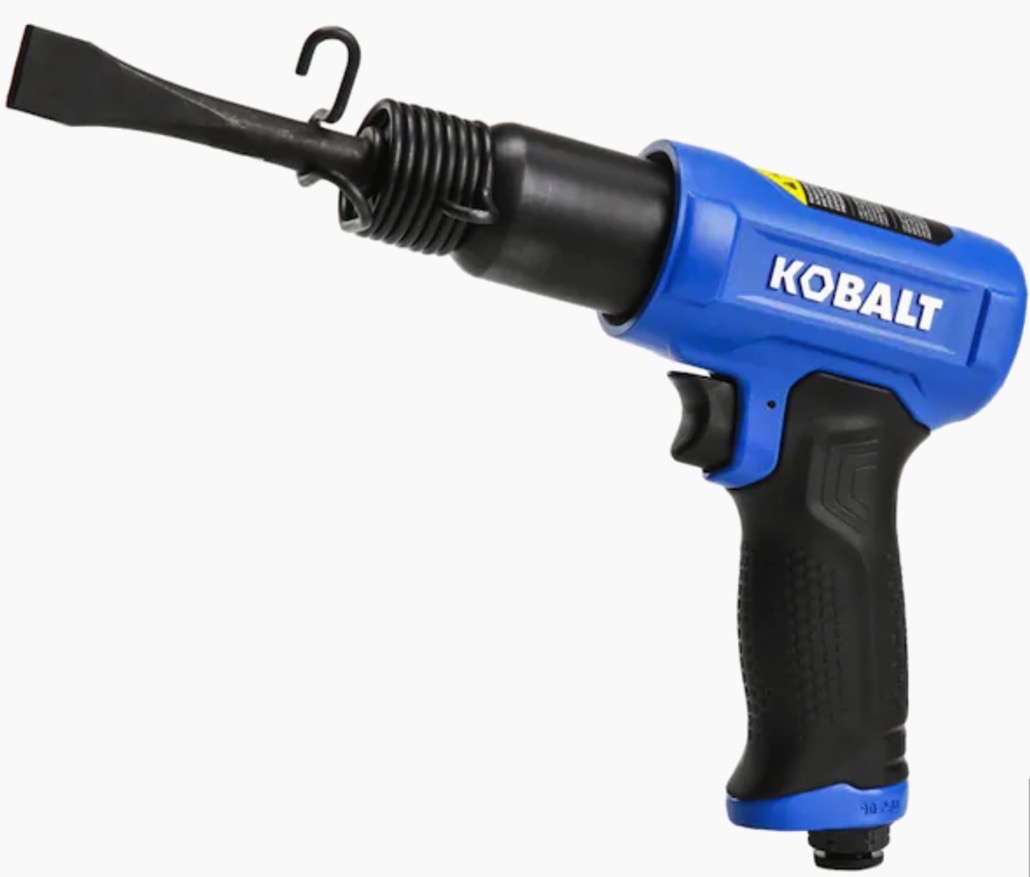 The air hammer does a great job, but it will rattle your fillings loose if you are not careful!

This picture is my work face just after forty minutes on the business end of an air hammer! That there is a big case of UGLY!  Note the sweatshirt was black before I started. 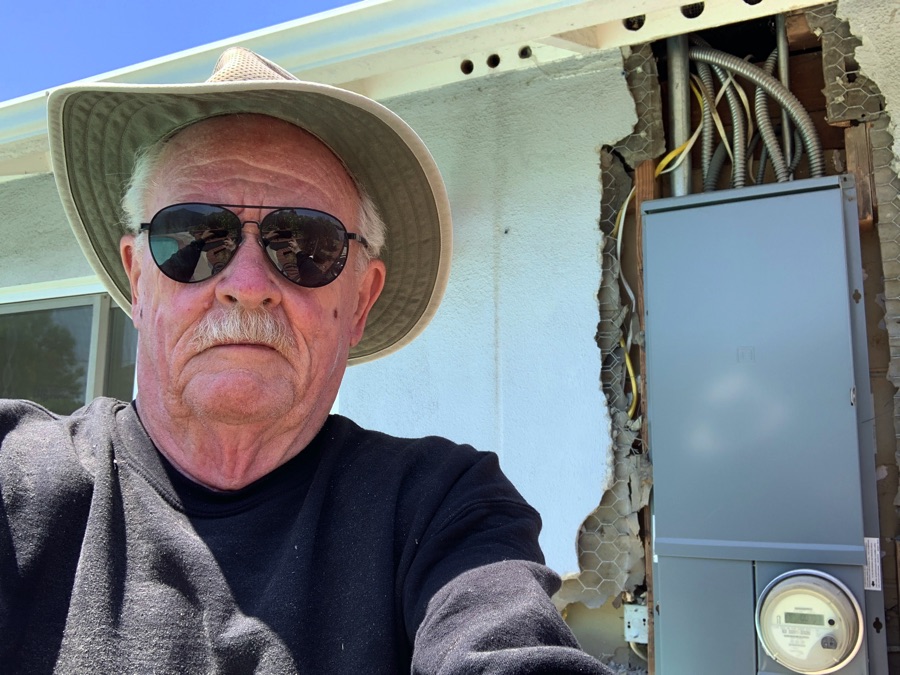 Me and the air hammer went to town on the stucco surrounding the new power box.

There is plenty of old wire and tar paper showing so it will be easy to place the new paper under the old and then lay in the wire. 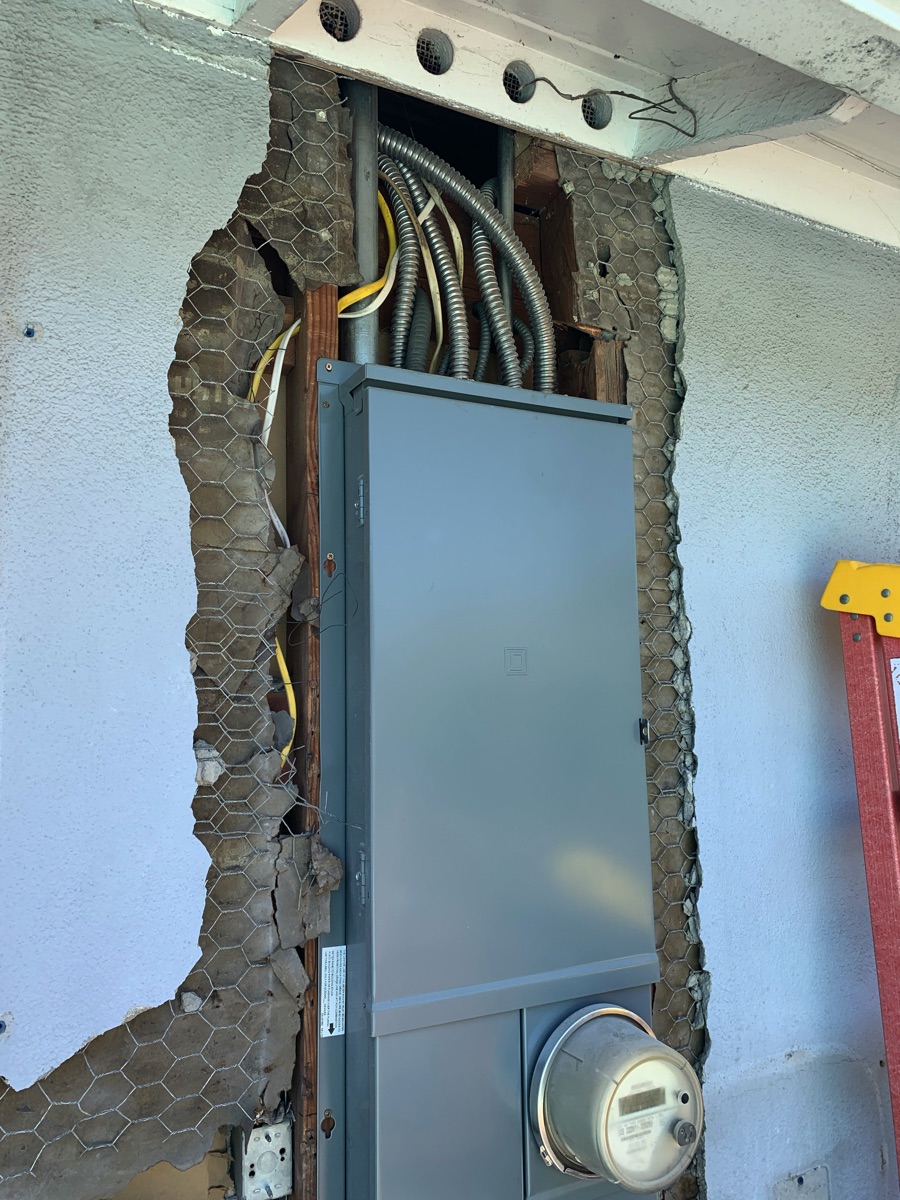 We needed to tie in the new wire to the old and allow the city inspector to see it.

When we did the electrical box changeout, I added two more switches inside the house to control the 2000 watt floodlights and the pool light.  It was easy when I removed the outside wall. 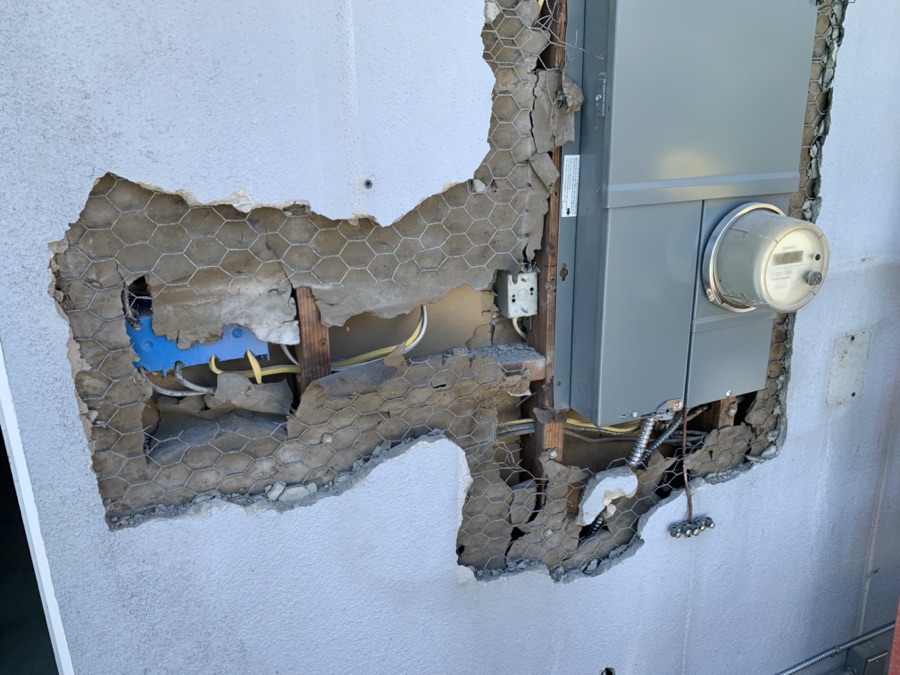 What included the new switches on the inside of the house.

I will finish the papering and wire tomorrow and call for an inspection on Monday.

Now it will be time to rest a bit, but first, we moved some concrete blocks from Bob’s truck to the back yard. Paul’s wheelbarrow to the rescue!  We are going to build an eleven-foot long wall about five feet high to hide the pool equipment from sight.

The picture below popped up this morning, and it is from four years ago when the three of us (me, Ed, and Del) created a carport for Irene.  Did you realize that between us guys, there are 236 years of good looks and experience? 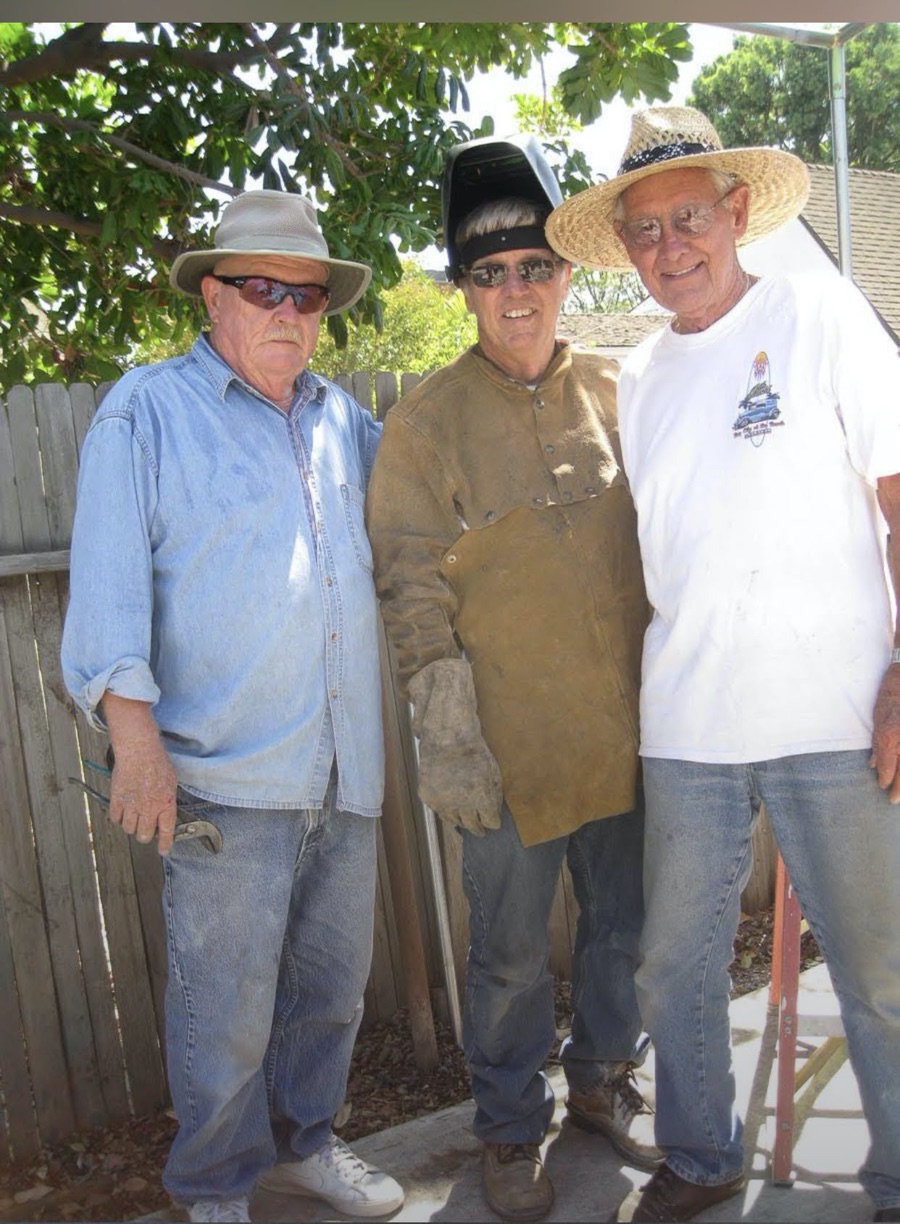 Four years ago… A handsome trio if I don’t say so my self!

It was HOT, so I changed our reservations at Patty’s Place from the patio to the outside area to capture the breeze. 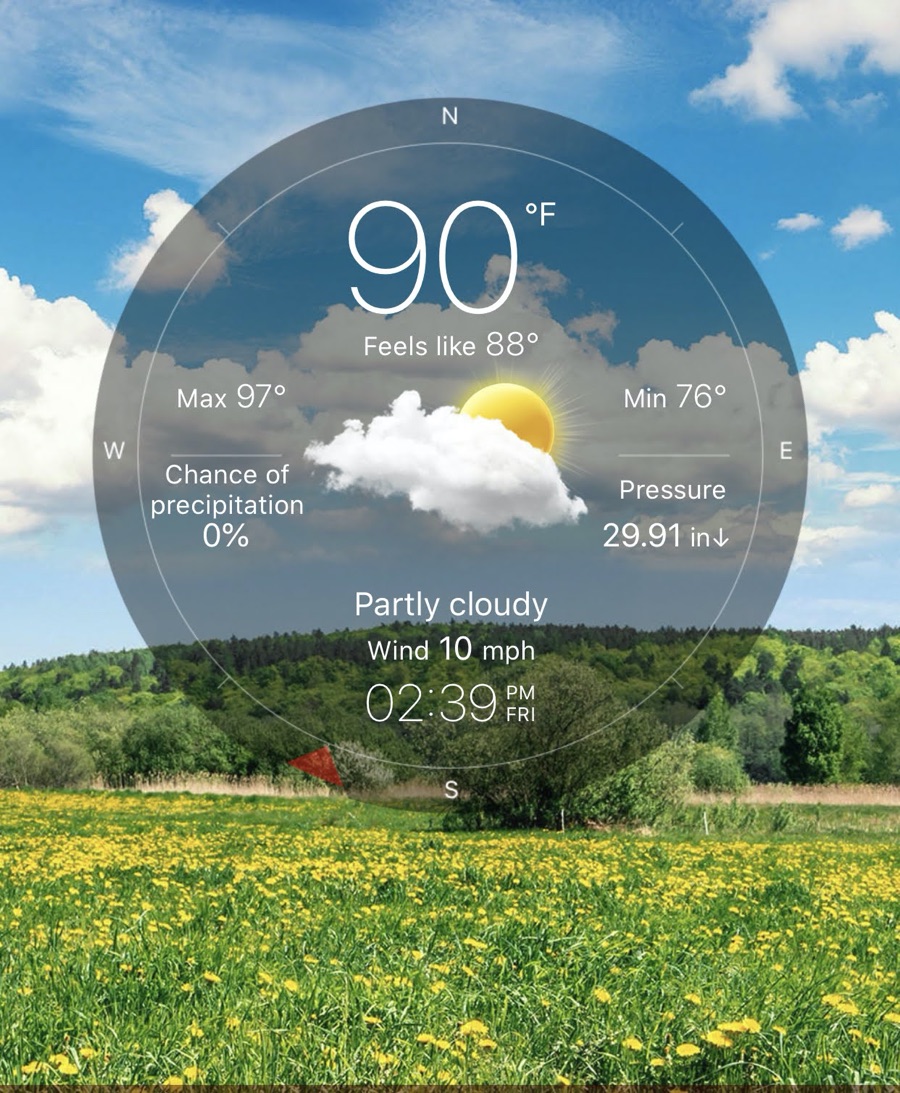 It was HOT today

Mary left her practice in Huntington Beach and headed over to Patty’s, where we had a lovely dinner.  She said her salmon was excellent, and my swordfish was perfect.  We had some wine, and then she departed, and Scout needed some attention.

I stayed for about 30 minutes and got hold of Robin, who was just about to take a shower at my house.  Robin and I decided key lime pie was needed, so two slices came home with me.

Did You Know? The Key lime (Citrus × aurantiifolia) is a citrus hybrid (C. micrantha x C. medica) with a spherical fruit, 25–50 mm (1–2 in) in diameter. The Key lime is usually picked while it is still green, but it becomes yellow when ripe.

The Key lime is smaller, seedier, has higher acidity, stronger aroma, and thinner rind than the Persian lime (Citrus × latifolia). The Key lime is valued for its unique flavor compared with other limes. The name is derived from its association with the Florida Keys, where it is best known as the flavoring ingredient in Key lime pie. It is also known as West Indian lime, bartender’s lime, Omani lime, or Mexican lime, the last classified as a distinct race with a thicker skin and darker green colour. 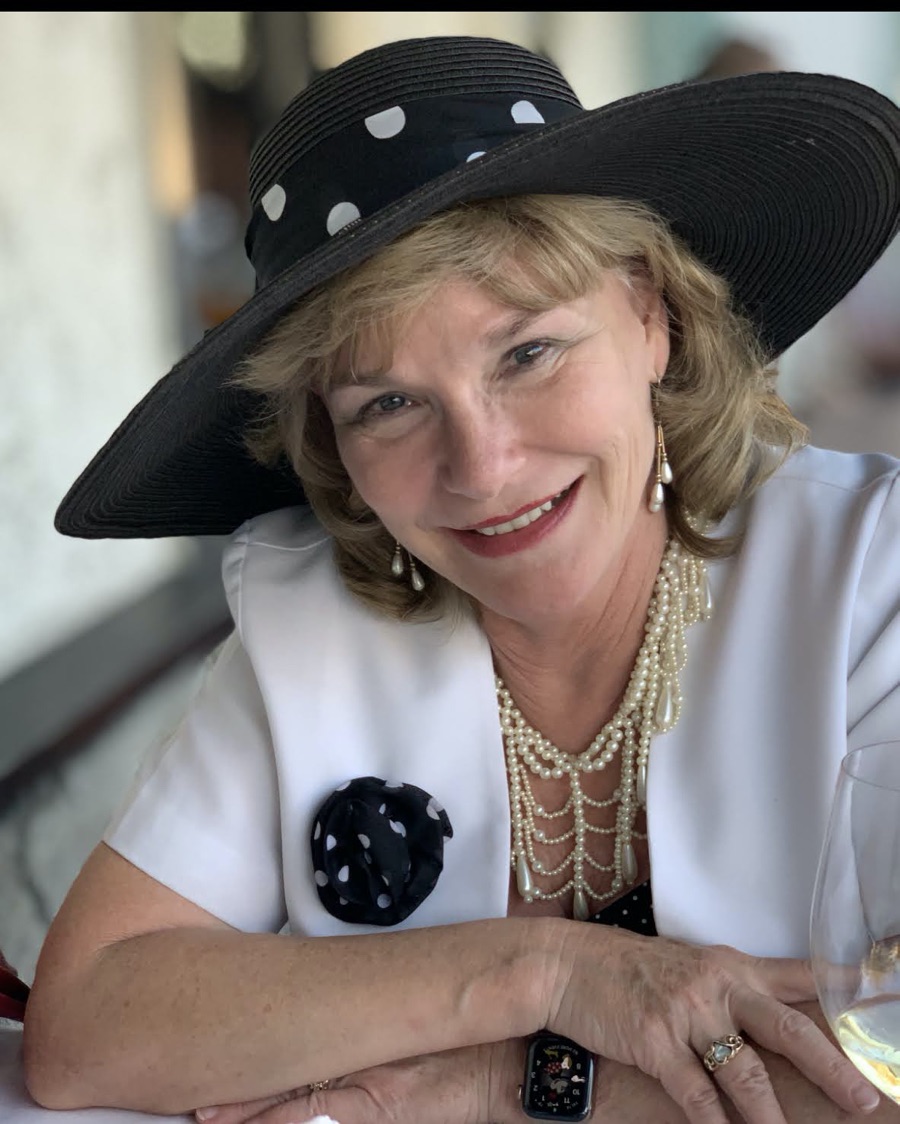 A lovely evening with a lovely lady!

Tonight the Silver Lady came out of the garage and went for the short ride to Patty’s.  She was feeling a little short-changed sitting at home all the time.  She is fourteen years old but a better car I have never had.  Maybe at Christmas I will buy a new car for my birthday, probably a Lexus ES or LS coupe. 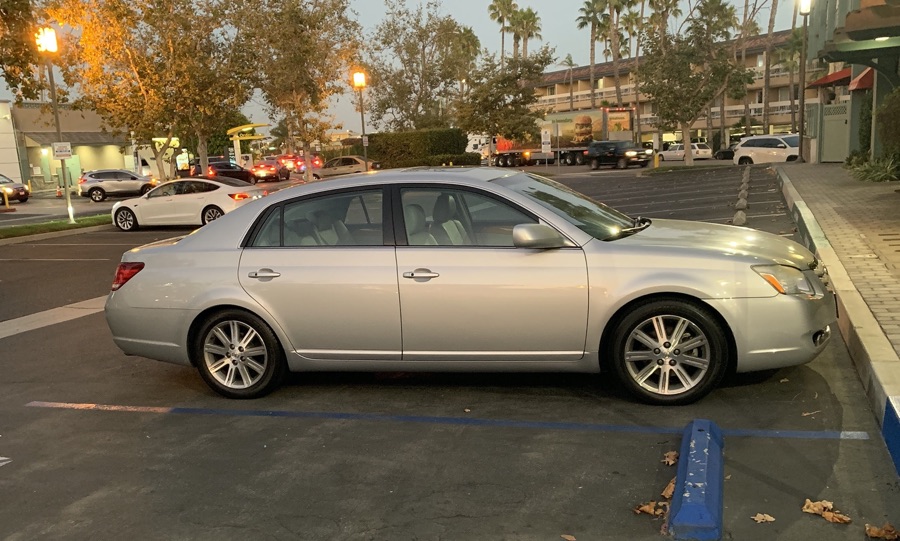 The Silver Lady demanded to go tonight; she was tired of playing second fiddle to the Honda!

Robin is working tomorrow at Boeing, so staying over reduced her drive time from 90 miles to eight miles and travel time accordingly.  We had our dessert, and then we called Mike Andersen on the Bat Phone and chatted with him for a while.  By the time we were done, it was 9:30 PM and time to crash.

Mary and I talked for a few minutes to coordinated times for dinner and the dance tomorrow as Bob Z. had just called with the reservation.

Crash time and tomorrow will be busy as the wall will begin to go up.

Just an old retired guy trying to finish out my last years on this planet. I lost my best friend and wife in early 2020. I was blessed again by reconnecting with Dr. Mary Côté, a long-time friend. Mary and I got married July 28th, 2021, and are enjoying life together and plan to spend the rest of our lives being a blessing to our friends and family.
View all posts by Paul →
This entry was posted in Dining Out, Family, Food and Wine, Friends, Walking, Working Around House. Bookmark the permalink.