Saturday And All Is Well!

You never know how strong you are until being strong is the only choice you have.  – Bob Marley

Time to dance and dance we did, sometimes four nights a week.  Below we are at Santa Ana with Bob & Donna, Ed & Kathy, Vicky & Del, Leon & Marsha, and others.  We danced until we were tired and then danced some more.  We did pretty well before Sue’s poor back began to deteriorate.  We had great fun with friends and, as always, the teasing lamp was lit.

I miss this beautiful person every day.  The question is often asked, “What would Sue do in a case like this?”  She was my beacon. I love you, Sue! 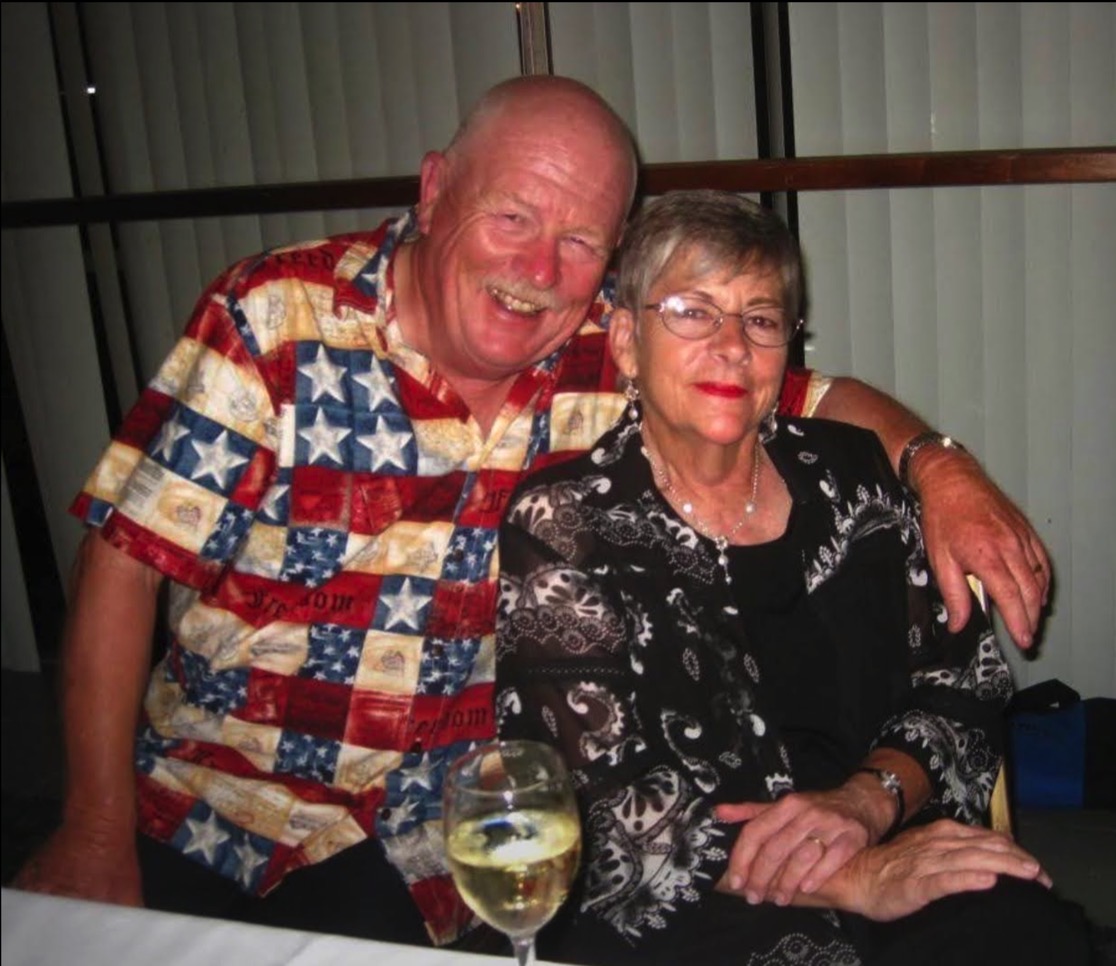 Lots of memories were made at the Santa Ana Elks Lodge. 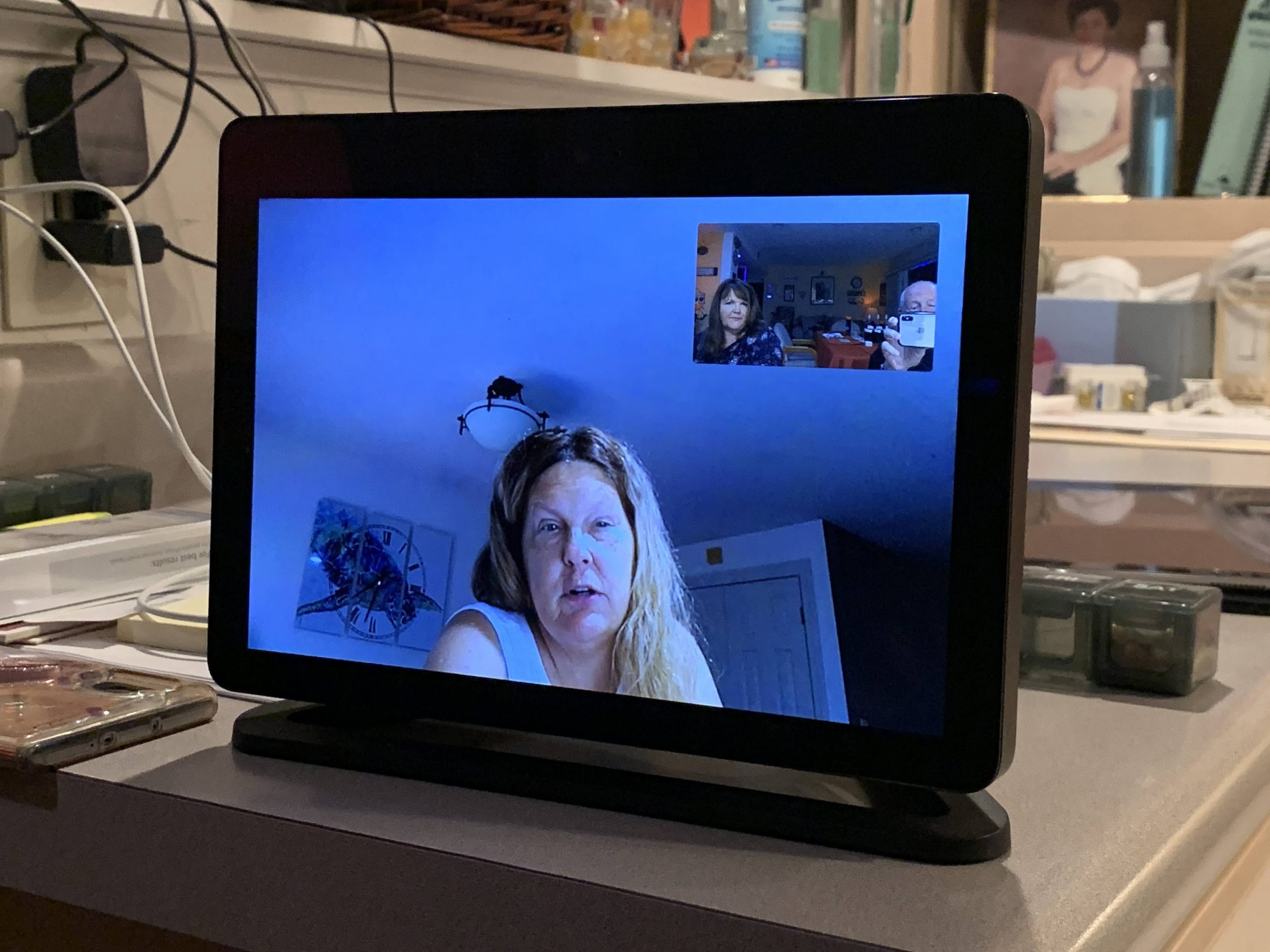 Even though the scale is indicating green (under 190 pounds), a walk is needed so into my walking costume, and off I go in a cloud of dust. Well, the speed was turned up a bit as I rounded the corner into Staples. 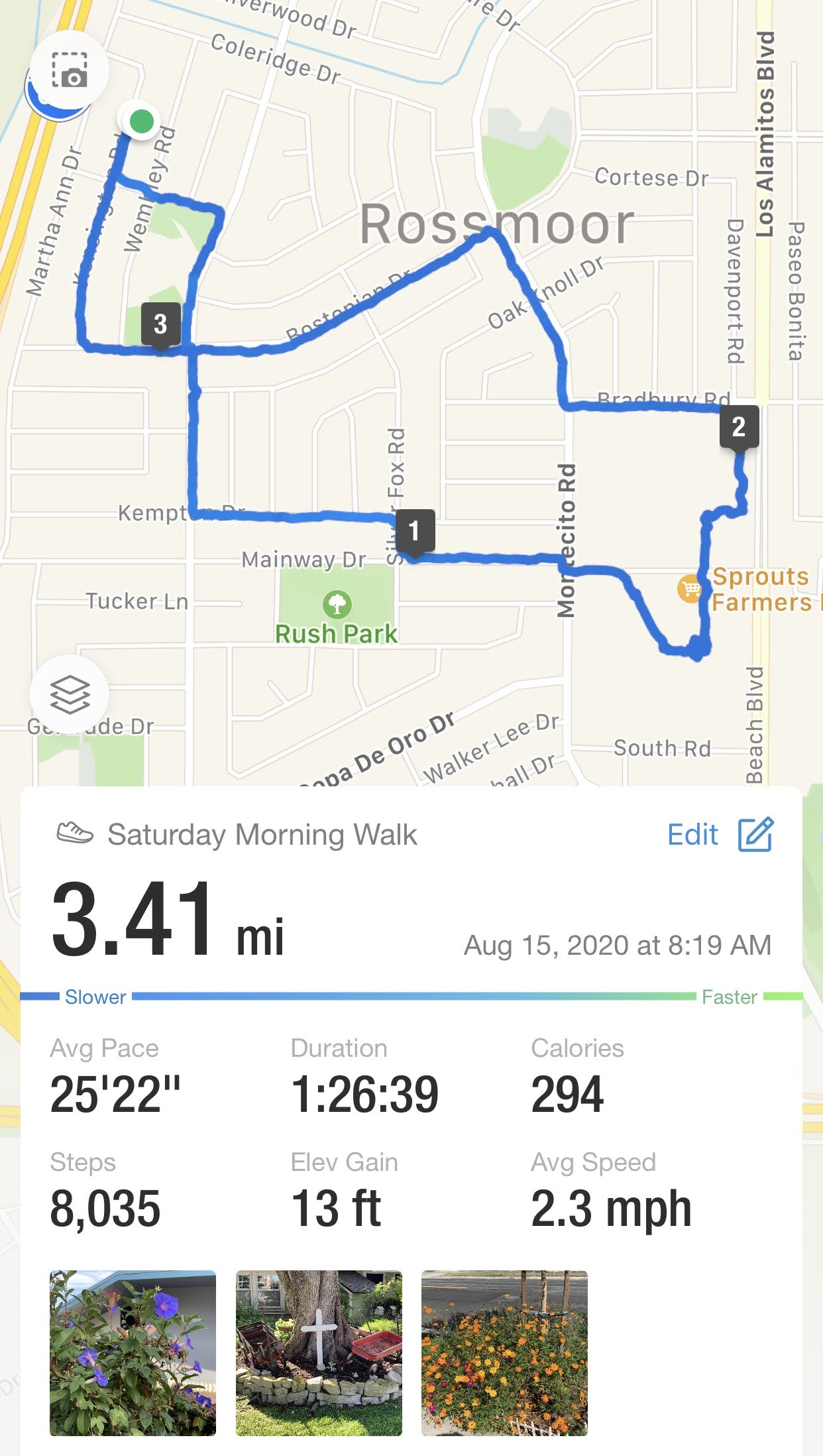 Almost three and a half miles!

As I walked by the school, the morning glories were out in full bloom.  In some cultures, certain species are called “water spinach” and are used in cooking.  Not knowing for sure, I did not pick any flowers today! 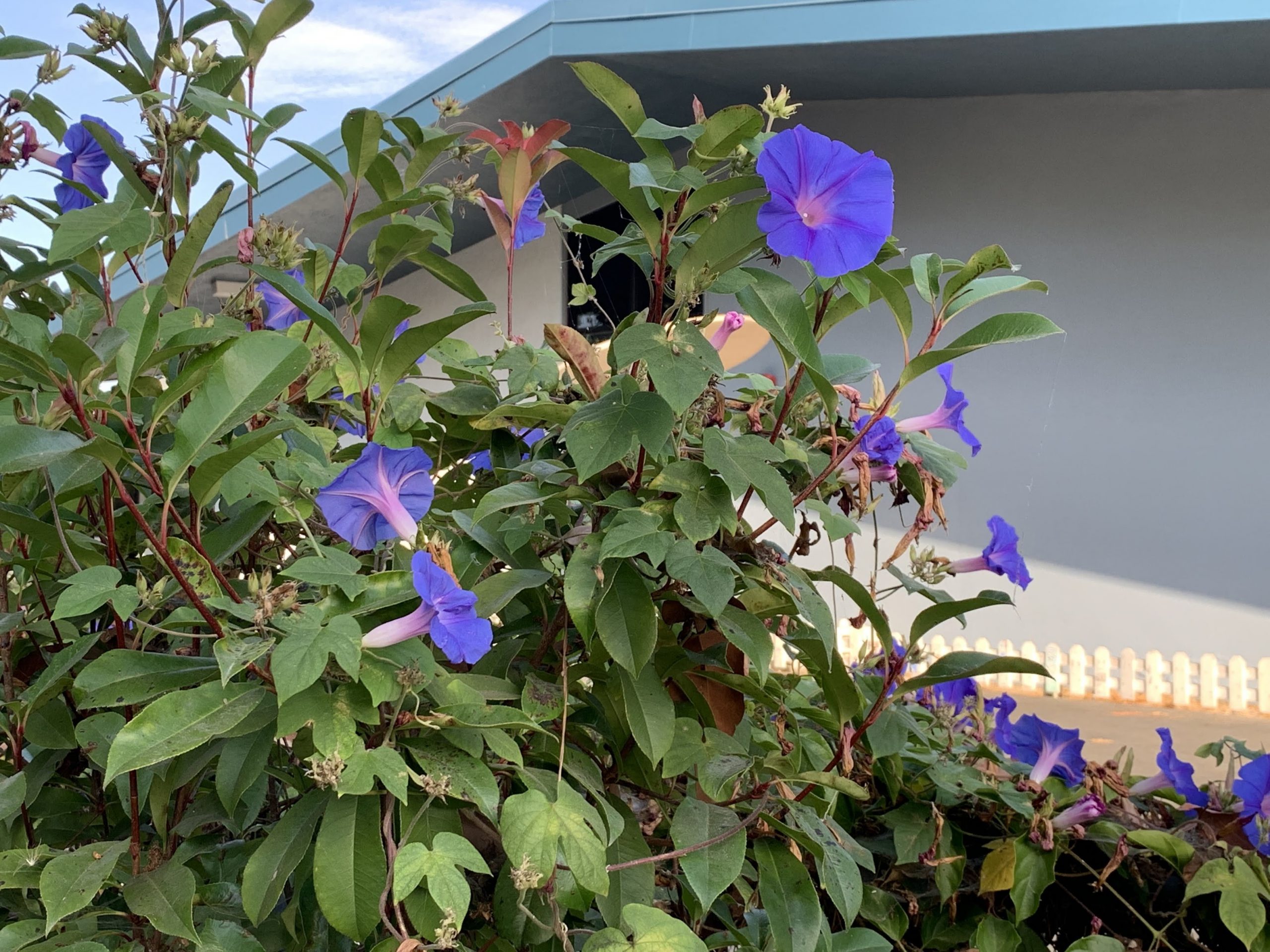 Did You Know? Morning glory was first known in China for its medicinal uses, due to the laxative properties of its seeds.

Ancient Mesoamerican civilizations used the morning glory species Ipomoea alba to convert the latex from the Castilla elastica tree and also the guayule plant to produce bouncing rubber balls.  The sulfur in the morning glory’s juice served to vulcanize the rubber, a process predating Charles Goodyear’s discovery by at least 3,000 years.  Aztec priests in Mexico were also known to use the plant’s hallucinogenic properties.

Many of the homes in our area do front yard decorating, and this is no exception.  In my yard, I have an old Radio Flyer wagon whos time is about up for hauling things, and I may make a donation to these folks’ front yard. 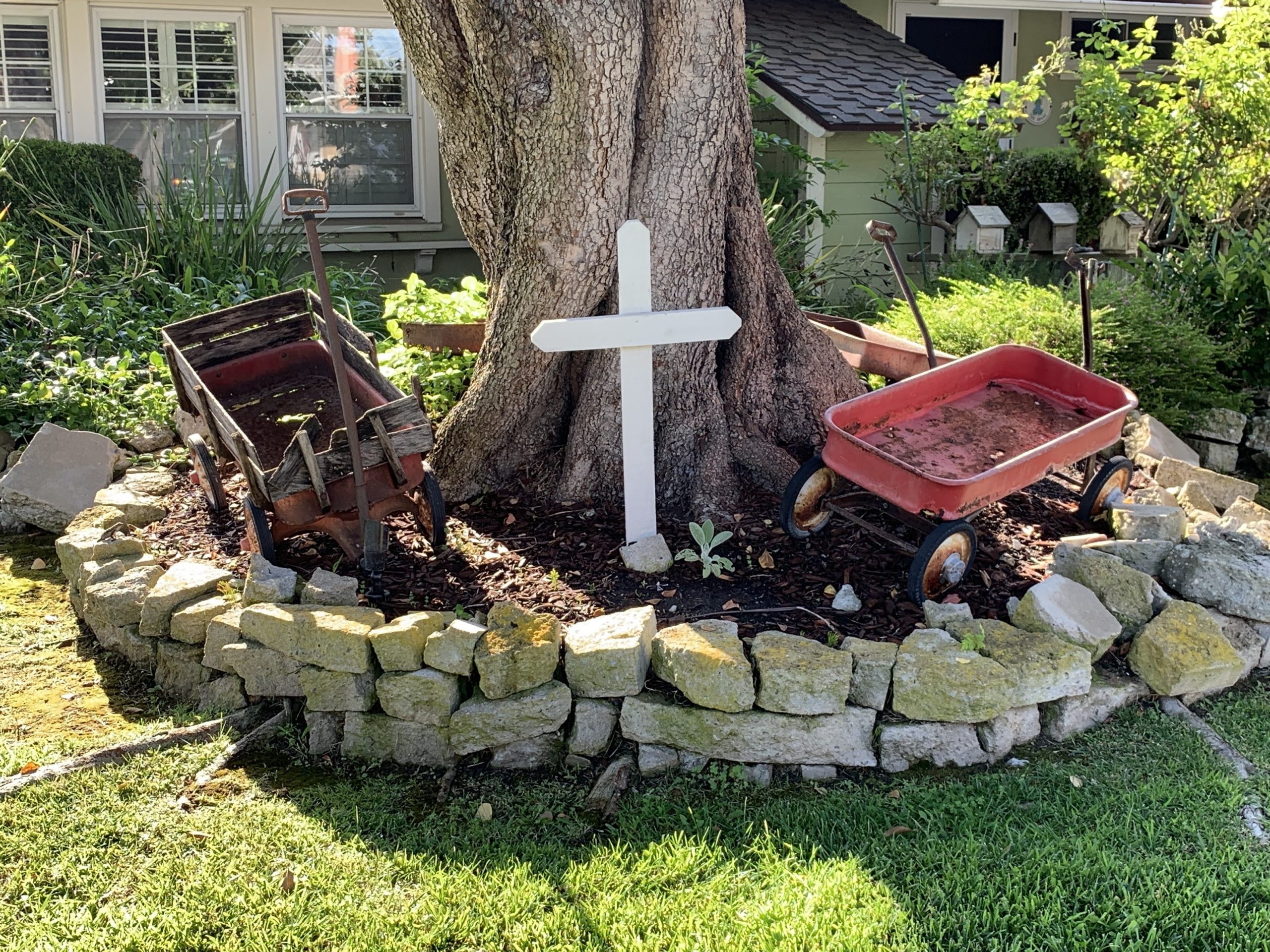 These flowers seem to be reaching for the sun, and on a day like today, it is easy to do! 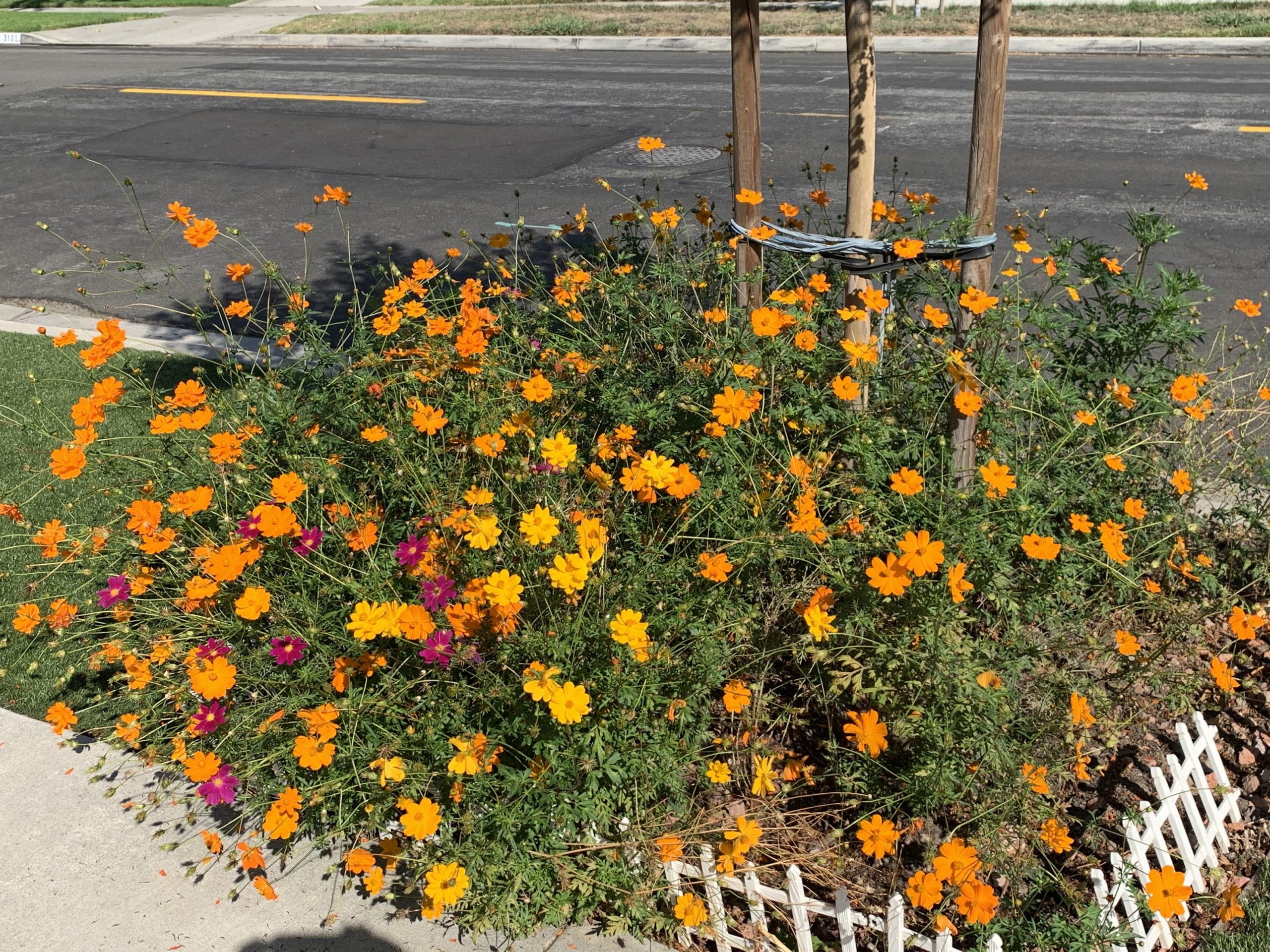 It’s going to be a hot one today!!

The plan was to meet Robin and her two sidekicks for lunch.  They are on a unique project to close down a contract that was ending.  So, for the next twp months, they are going to work on Saturdays and finish the job.  They work in a field called Data Management at Boeing, but they have the tickets necessary to perform on this specific contract. 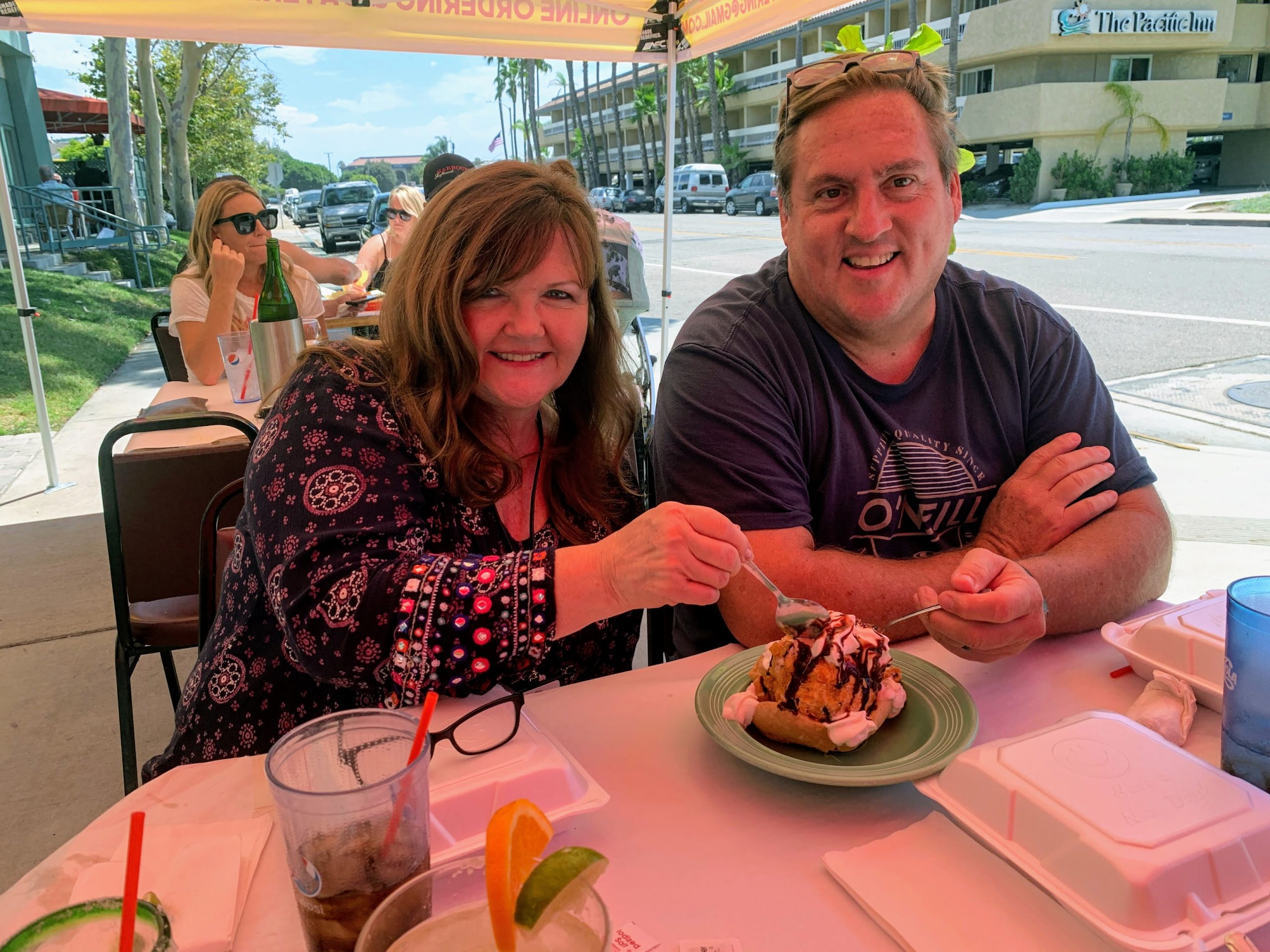 Robin is clowning around with Reno. 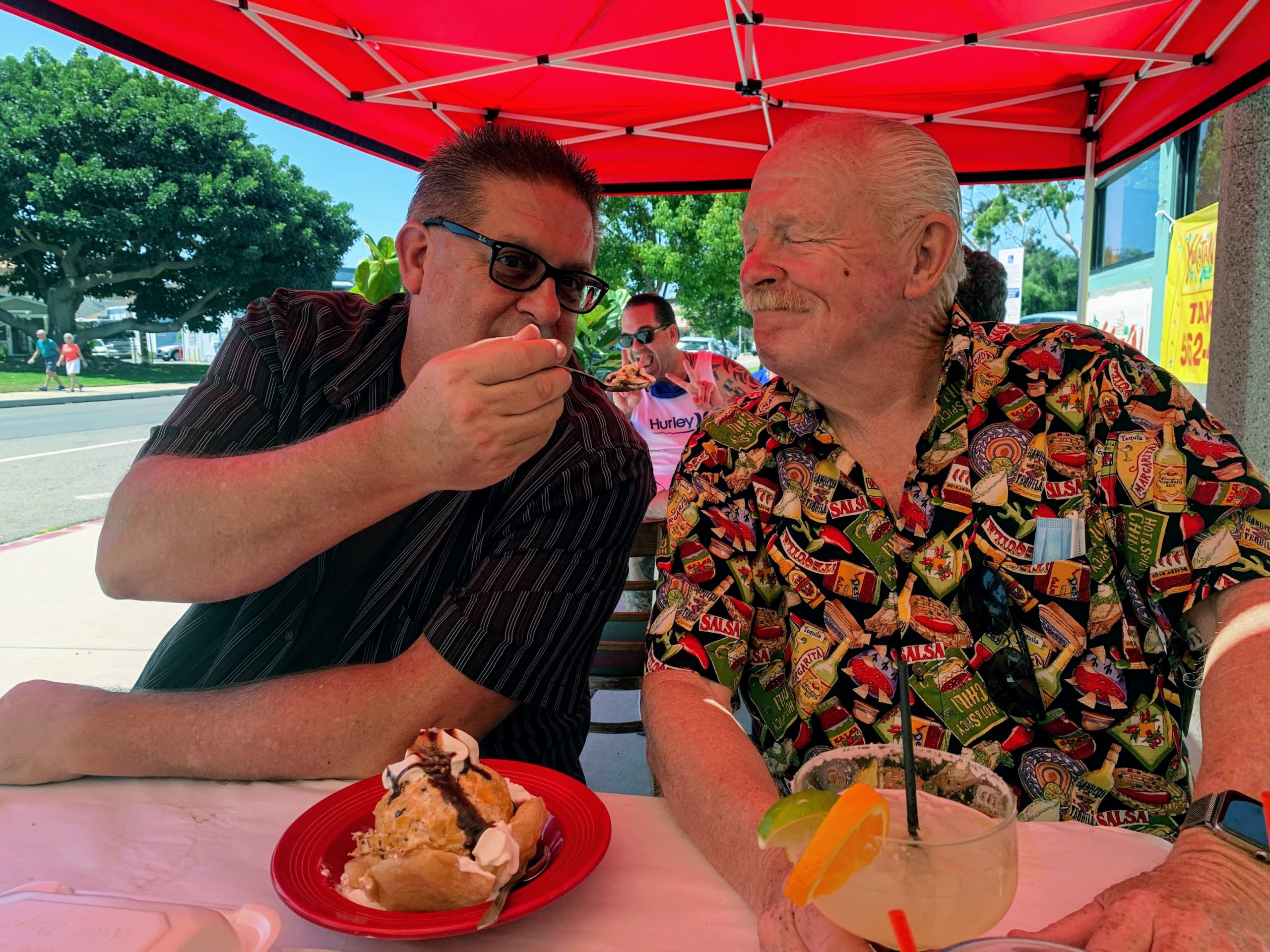 My dessert was in the glass, not on the plate. I was a good boy!

After getting home, I puttered around and decided to take a quick rest before going out.  Well, I was supposed to leave my house at 4:00 PM, but I did not wake up until 4:12 PM, so a mad dash ensued.  I was about a half-hour late, but that worked out fine, and we just headed to dinner in Chino immediately.  I was so dead to the world that Bob came by and could not get my attention.  I may have to rethink getting up and having coffee with Robin at 3:00 AM.

We had dinner at the same place as last week, and their chicken was excellent.  Two glasses of wine and I was ready to dance, but my feet were not. 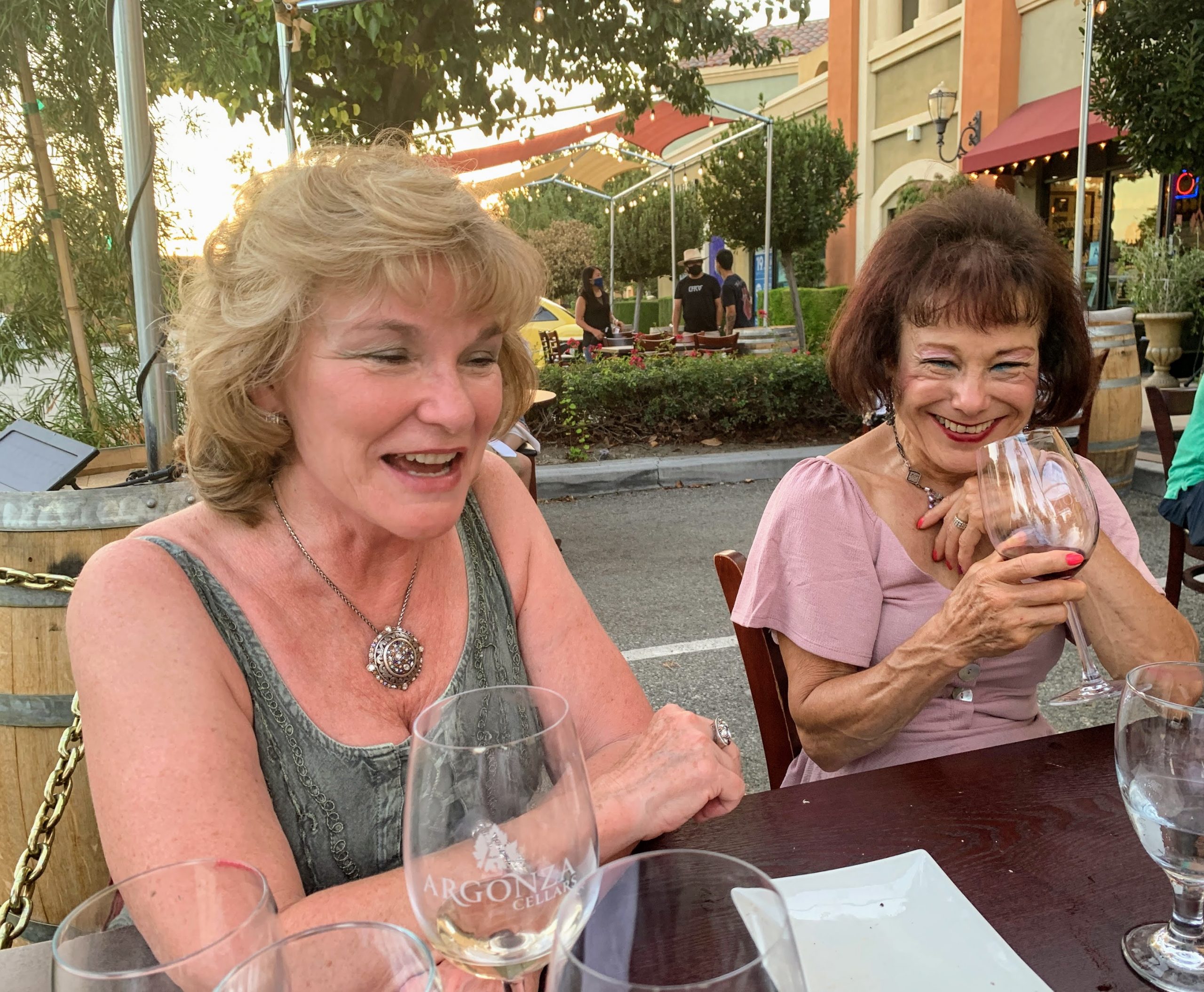 The girls were sharing stories.

MAry learned from last week; she has black dance shoes this evening. 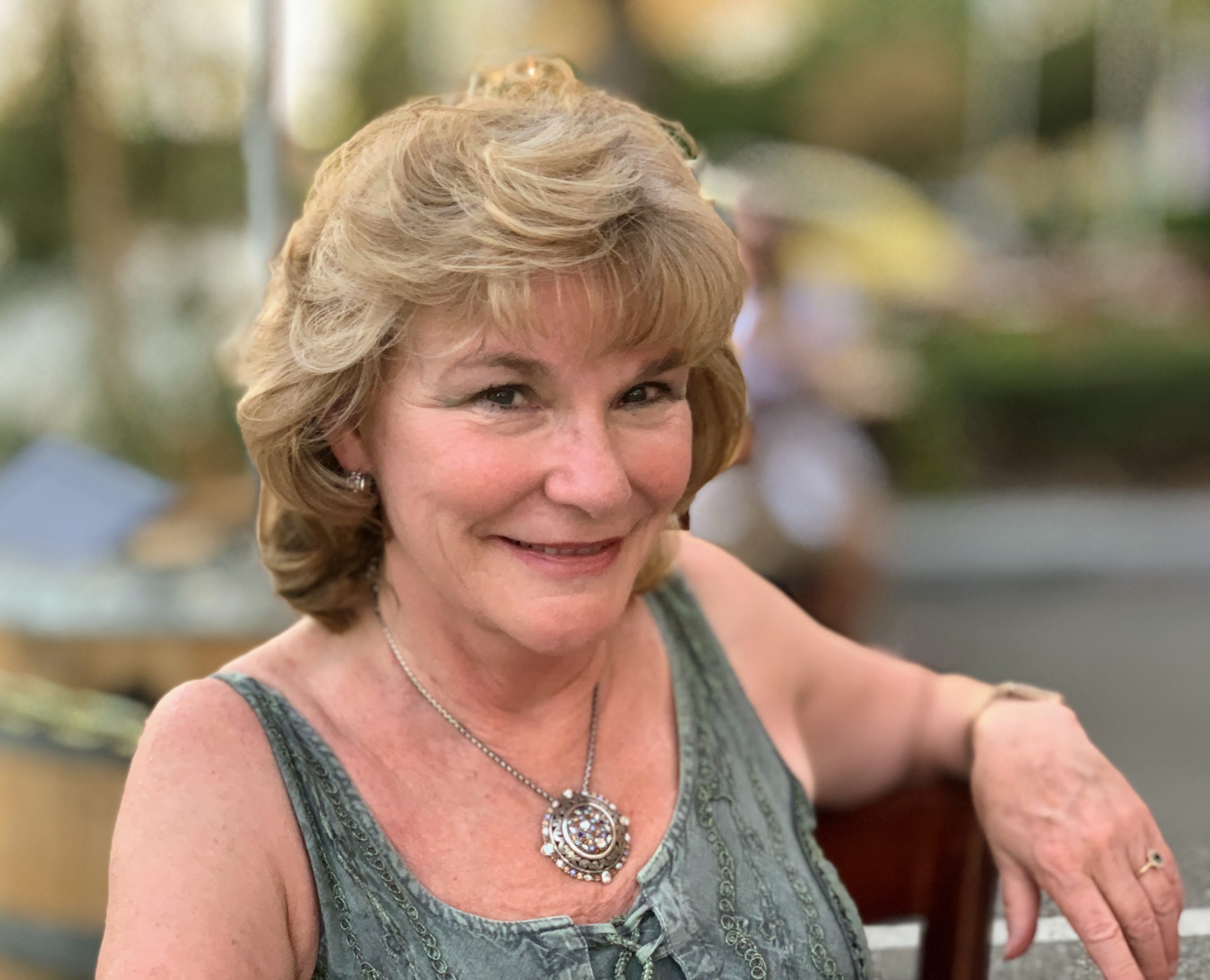 Dinner is done, time to dance.

We danced until 10:00 PM and then I took Mary home where I enjoyed a cup of coffee before returning to the beach.  It was warm last night as we sat on Mary’s patio while I downed the coffee.  It’s about a nineteen-mile ride home, but tonight I did not have to stop at Jan’s house on the way!

Tomorrow morning will be busy as I have to do the bedspread or duvet thing-a-ma-bob.  A duvet is a type of bedding consisting of a soft flat bag filled with down, feathers, wool, silk, or a synthetic alternative, and typically protected with a removable cover, analogous to a pillow and pillowcase. Sleepers often use a duvet without a top bed sheet, as the duvet cover can readily be removed and laundered as often as the bottom sheet. Duvets originated in rural Europe and were filled with the down feathers of ducks or geese.  I will take care of that early as it is a fight to get the geese and ducks back into the duvet without lumps!

Oh, the life of a widower is filled with these challenges.

Just an old retired guy trying to finish out my last years on this planet. I lost my best friend and wife in early 2020. I was blessed again by reconnecting with Dr. Mary Côté, a long-time friend. Mary and I got married July 28th, 2021, and are enjoying life together and plan to spend the rest of our lives being a blessing to our friends and family.
View all posts by Paul →
This entry was posted in Dancing, Dining Out, Food and Wine, Friends, Walking, Working Around House. Bookmark the permalink.