“Grief is a process, not a state.” – Anne Grant

Always dressed to kill whether it was working in the garden for at a formal dinner-dance on the Queen Mary, that was Sue. She was always ready for any occasion with earrings and necklaces to match.  I had to “pass inspection” before I could go out as I often selected black pants and blue shirts or plaid shirt and striped pants, or other horrible mixes of clothes.

I could just take one step out of our eighteen=foot walk-in closet, her eyebrows would rise and every so small movement of her head indicating “REALLY!” It got to be funny, and once in a while, I would try to be mismatched just to get a stronger reaction.  She would laugh and say something like, “OK, let’s go, but you have to sit at another table tonight!” We would both laugh!

Now, anytime I go out (unless it is to the hardware store), I get dressed and check myself in the full-length closet mirror, mumbling to myself, “What would Sue think?”

She is missed every minute of every day.  I love you, Sue!! 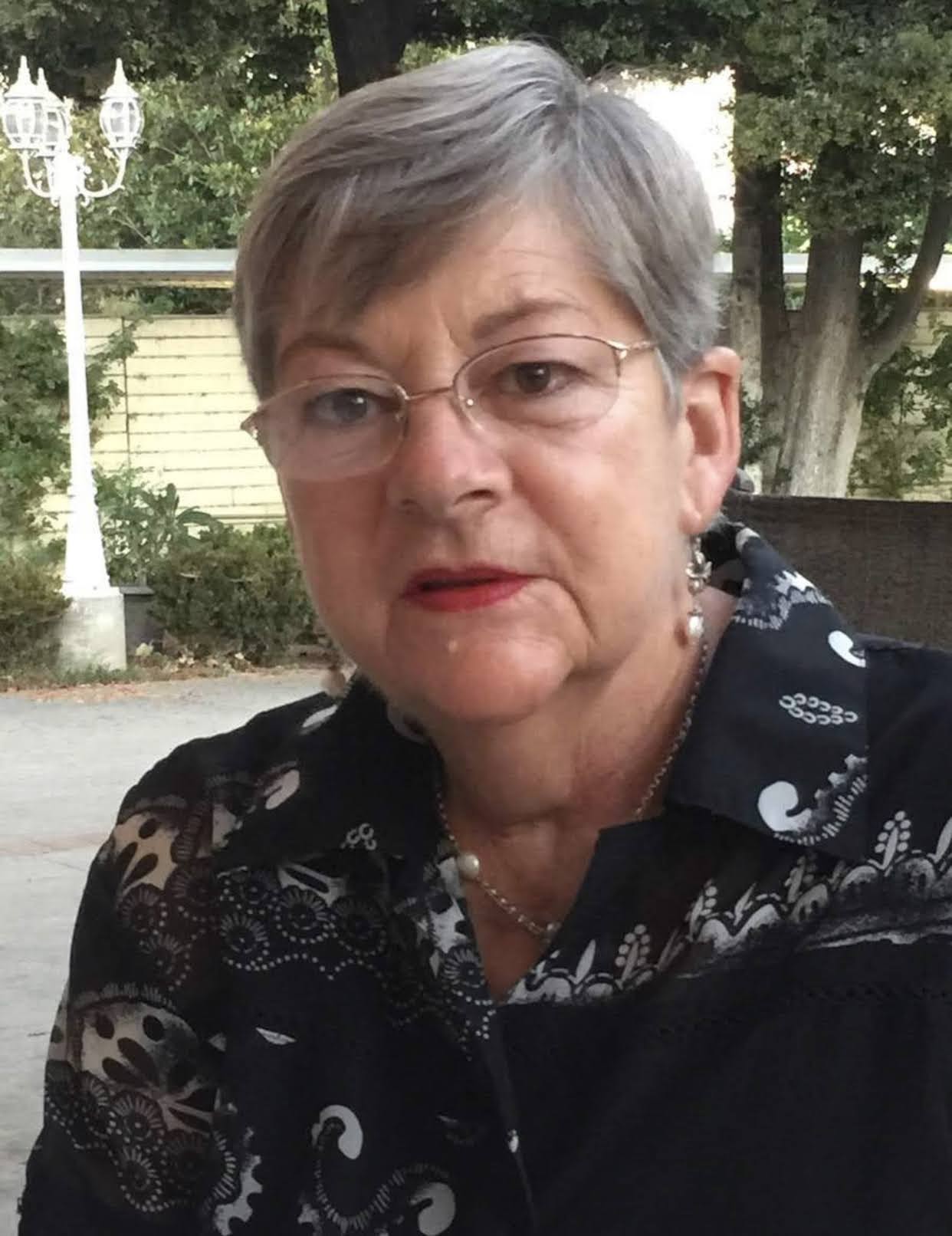 Today is pretty busy, according to the calendar.  Robin was up at 5:30 AM, and this old carcass began to move a little after that.   Getting out of bed is always exciting as it would like someone just poured mile into the cereal own — snap, cracked pop.

Did You Know? During the cooking process, each piece of rice expands, creating a network of tiny air-filled pockets and tunnels inside the kernel. Add milk, and the cereal starts to absorb the liquid. This puts pressure on the air inside the pockets, causing the “walls” to shatter with a snap, crackle, or a pop.

OK, the noises have given way to a creaking sound of old joints rubbing together as the bathroom is the next stop.  The eyes are a little blurry, but the battery-powered toothbrush was activated, making a whirring sound as it receives a big helping of toothpaste before being plunged into the dark recesses of this old body.

It was frightening as the next sight was a mirror containing someone who was foaming at the mouth and whose hair looked like an explosion in a haystack.  Mornings are tough around here.

A quick look in the mirror, and it was decided I was presentable.  Checklist:  pants, shirt, shoes, brushed tooth, and brushed hair… Now it is coffee time. 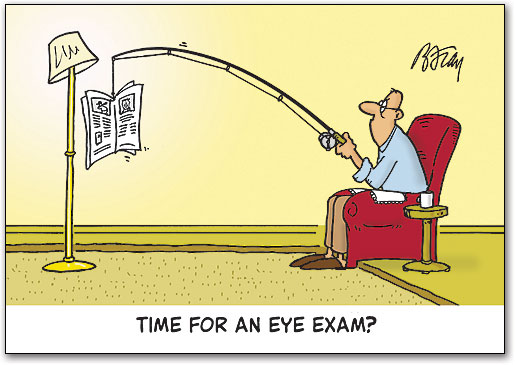 My eyes are NOT quite that bad!

This morning was my yearly eye checkup, and my eye doctor retired on my in December.  The new guys seemed pretty regular, Dr. Younger.  He knew Dr. Mary Cote, so he had to be OK.  Eyes were good, 20-20 in both eyes, and no signs of anything to worry about.  They dilated the eyes, so the world was bright.  Dark glasses were a necessity on the way home.

Robin was in the office talking to Colleen as they are working on “Kat’s Papers”.  My dear cousin was an aspiring writer, although her folks did NOT encourage her.  When Sue and I moved Kat into the senior living facility, I went through the house and found some of her work (much of it was destroyed, a long story for another time).   I gave some of her writings to Robin, and she is in the process of transcribing it to the computer.  Colleen was filling in the genealogy questions.  In a week or so, it will be available for a draft read. 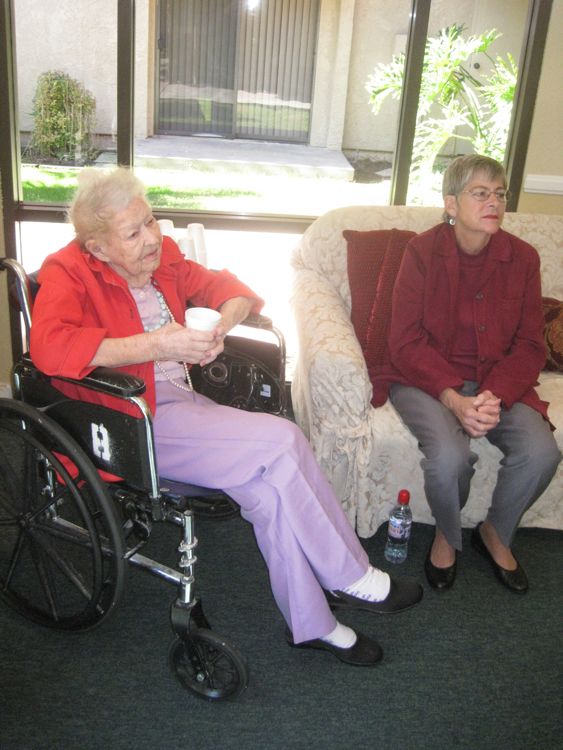 We visited Kat all the time when she moved into the assisted living facility.

Next, a “headshot” was needed, no, not by my ex—a photographic headshot for the Director’s job I now have.  Time was running out, so a shirt, tie, and a blue sport coat were located and put onto this magnificent body.  No time for dress pants, my cleanest pair of blue jeans took care of the bottom; after all, it was a headshot.

Passing by the office on the way out, I asked Robin and Colleen if it were OK to wear jeans and a sport coat.  Damn!  Two wolf whistles hit my ears simultaneously. This is the latest style!  How would I know?

The photoshoot took just a few minutes and the Grey Ghost headed home where Robin was about done with “Kat’s Book” for today.  We decided to go to lunch, so back into the Ghost, and skedaddled down to the Yucatan Grille!

We both had the lobster enchilada, which is about as low calorie as one can go.  We shared a salad, and Robin did a diet coke. Thinking about a diet coke myself, a margarita appeared (because it automatically comes to be when I enter that restaurant). 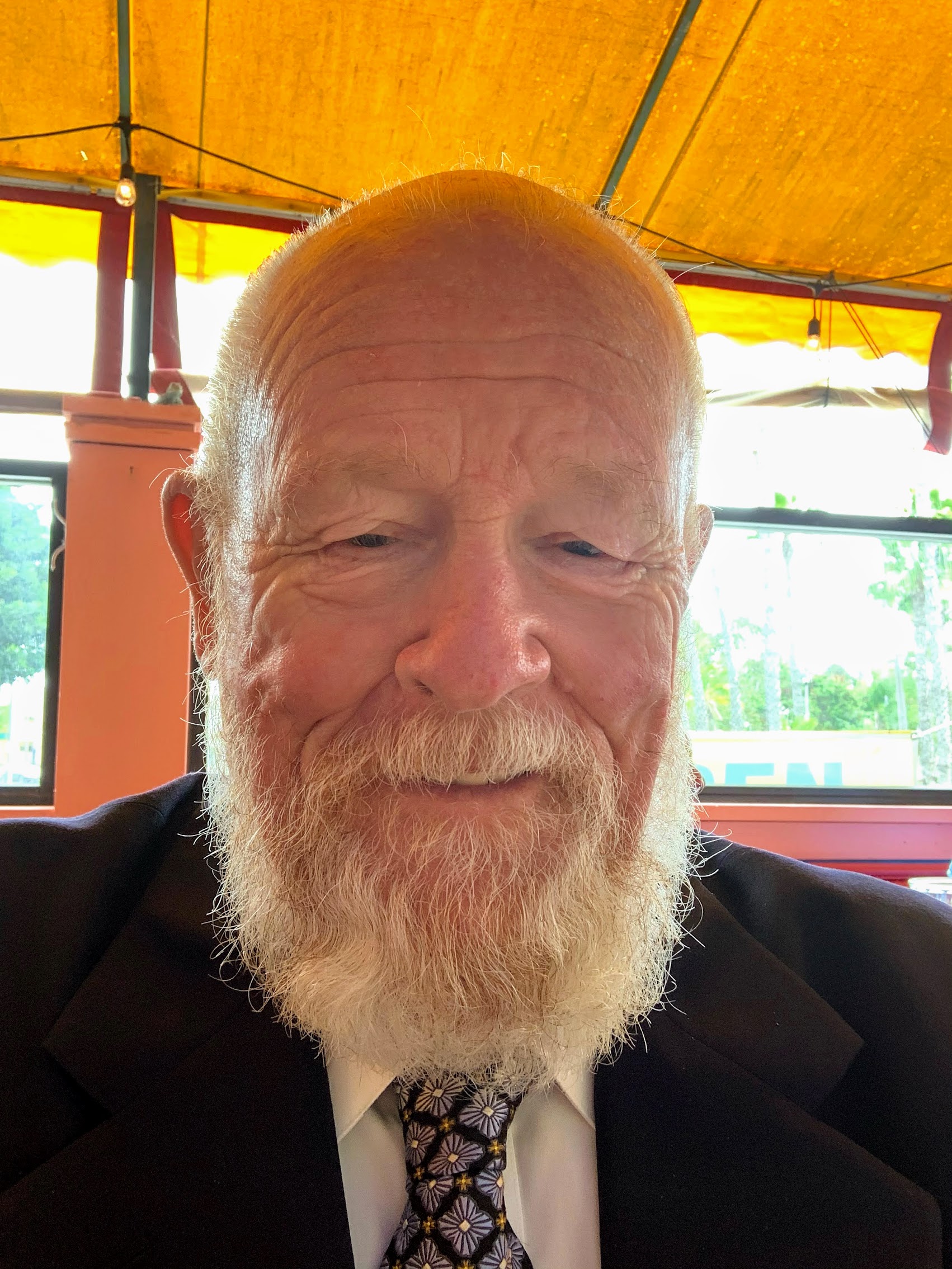 I kept my jacket one as I liked being “in style” for a change!

When we arrived back home, Robin headed for Corona, and the wait began for the arrival of the new gates.   At 2:00 PM sharp, the truck rolled up, and the beautiful gates were delivered. The stainless hardware and the Makita tools were ready for them.  The impact wrench sure beat their crescent wrenches! Within an hour the locks were installed and we were open or closed for business! 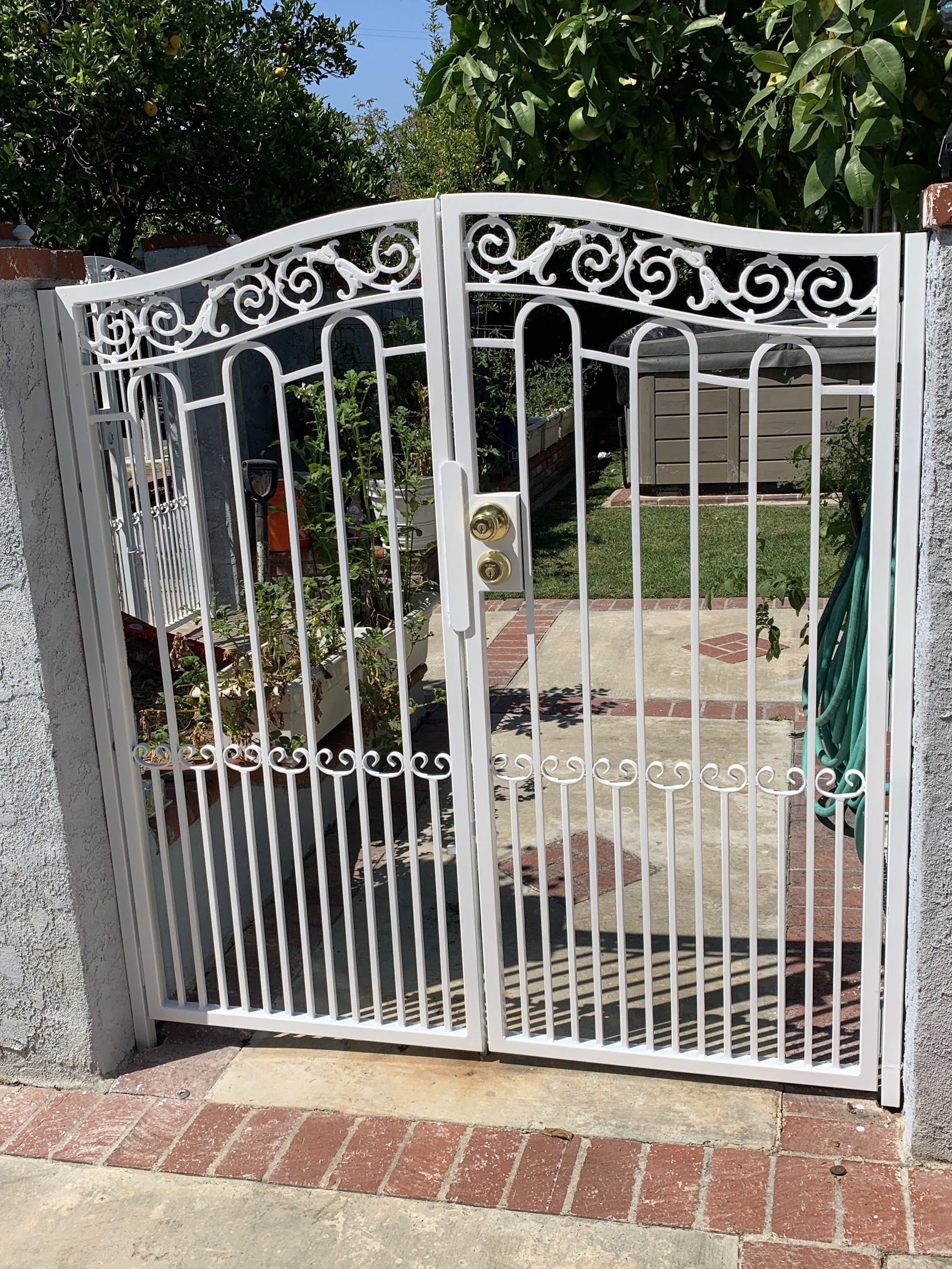 They looked as good today as they did twenty-five years ago; Sue could have approved!

Time for a quick nap before walking.  Miss Marianne turned me on to a series called “Middle” on IMDB.  Thank you, Marianne, it was an excellent suggestion.  I binged the first four episodes and giggled through most of it.

Did You Know? The series features Frances “Frankie” Heck (Patricia Heaton), a middle class, middle-aged, Midwestern woman and her husband Mike (Neil Flynn), who reside in the small fictional town of Orson, Indiana, based on the real city of Jasper, Indiana. They are the parents of three children, Axl (Charlie McDermott), Sue (Eden Sher), and Brick (Atticus Shaffer).

The series is narrated by Frankie, initially an under-performing salesperson at a used-car dealership and later a dental assistant. Her stoic husband Mike manages a local quarry and serves as a stabilizing influence in the family, though Frankie complains about his lack of affection at times. The kids are quite different from one another: oldest son Axl, a popular but lazy teenager, does well in sports but not in academics; daughter Sue is an enthusiastic young teen but chronically unsuccessful and socially awkward, and youngest son Brick is an intelligent but introverted compulsive reader with odd behavioral traits loosely hinted to derive from Asperger syndrome.

Time for a walk and another couple of miles were added to today’s exercise.  After ending up at home by 7:30 PM, without pause, the hot tube was entered, providing much relief to these aching bones.  Six thousand five hundred steps today, so tomorrow Ralph’s Market shall be the early morning target.

The Keurig looked lonely, so I popped one of Robin’s coffees into it, pressed the button, and headed to the new shower to wash off and get the jammies on!  How wonderful; clean, warm, jammies, and coffee! Two more episodes of “Middle” appeared on the TV and it is for sure the neighbors heard me laughing.

Robin is joining us at Joe’s house tomorrow for movie night, so Joe was notified via text.  Tomorrow is a big surprise, and pictures will be provided after the event. He he he, Bad Grandpa! 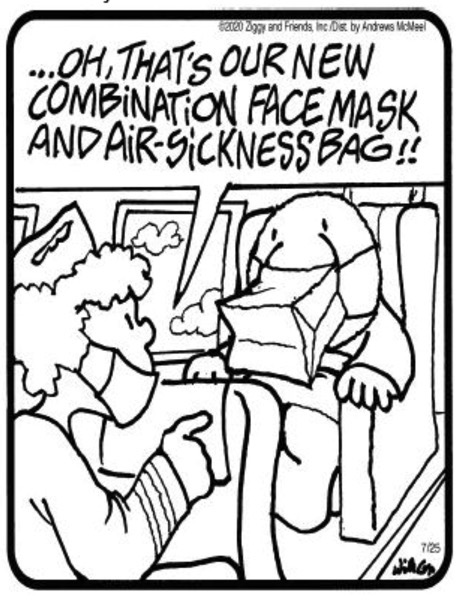 The world has changed!

Just an old retired guy trying to finish out my last years on this planet. I lost my best friend and wife in early 2020. I was blessed again by reconnecting with Dr. Mary Côté, a long-time friend. Mary and I got married July 28th, 2021, and are enjoying life together and plan to spend the rest of our lives being a blessing to our friends and family.
View all posts by Paul →
This entry was posted in Dining Out, Family, Food and Wine, Walking, Working Around House. Bookmark the permalink.