Hump Day, Down Hill from Here!

“Tears have wisdom all their own. They come when a person has relaxed enough to let go and to work through his sorrow. They are the natural bleeding of an emotional wound, carrying the poison out of the system. Here lies the road to recovery.” – F. Alexander Magoun

It’s been twenty-two weeks since that faithful morning, and I remain madly in love with Sue.  Here we are at Catal in Downtown Disney, one of our many favorite places to pass the time, hold hands, and gaze into each other’s eyes.  We had something special, nay, an extraordinary relationship than can’t be put into words.  Just being close to her and knowing, with our entire being, we worshipped each other made life wonderful.

I miss her soft, reassuring voice and conversations about this and that and everything in between.  She was part of me, and part of me is now missing.  I love you, Sue! 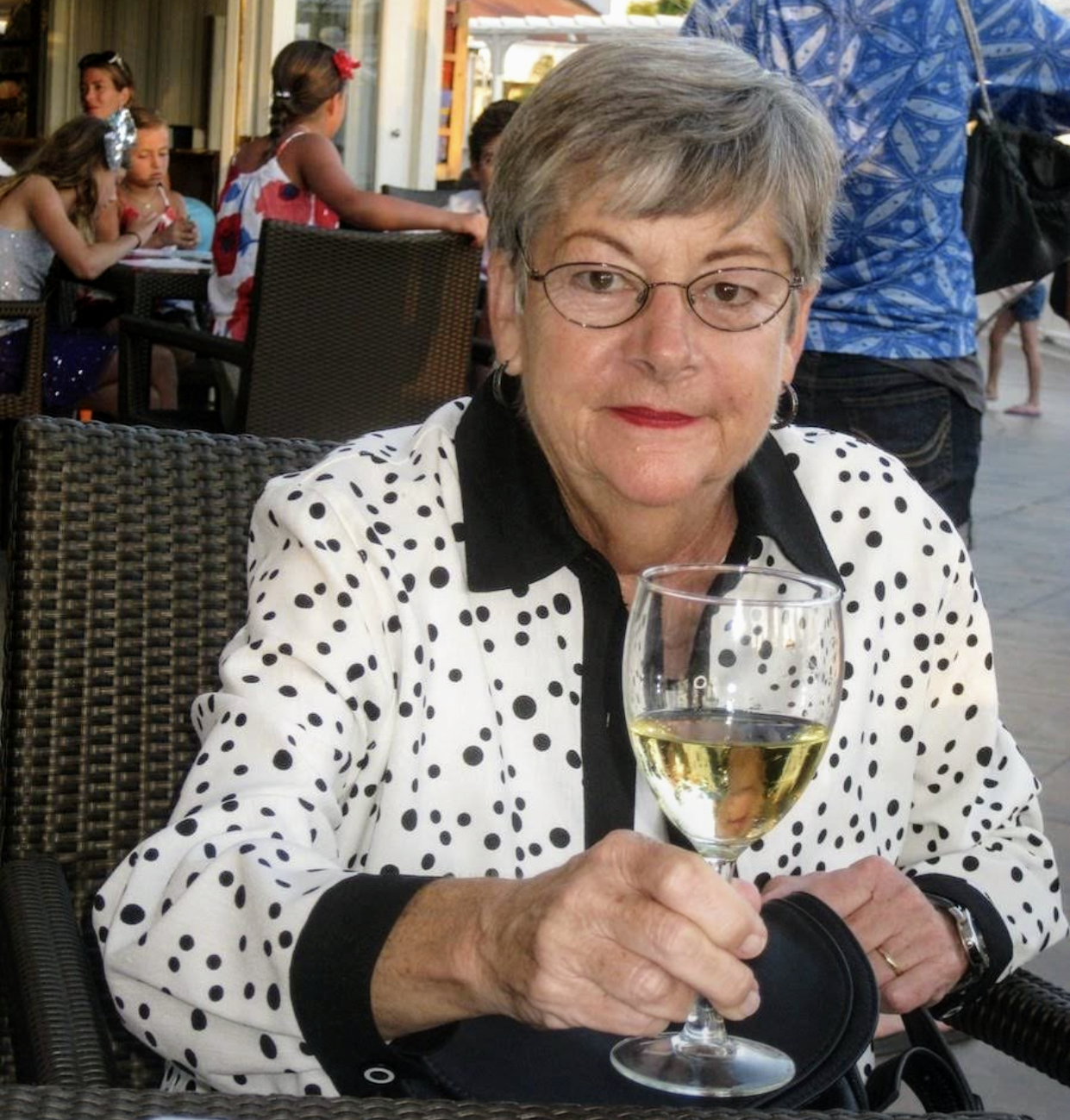 I finally got eight hours of sleep. It took me three days, but whatever.

The day had to begin, and at 5:30 AM, the eyelids popped open, the bladder began functioning in overdrive, and I scampered to start the day!  While brushing my tooth, a mental list was formed of all the things needing to be done. The list was stopped at item number one hundred. 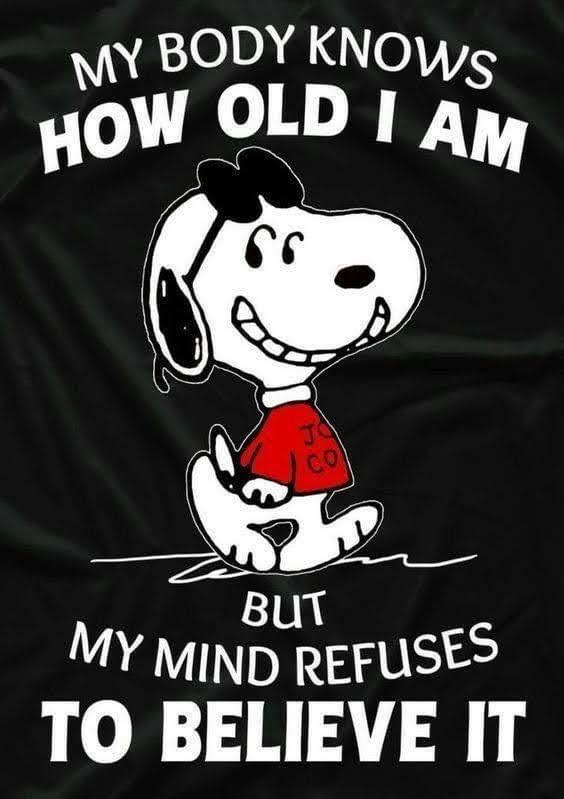 Robin was going to join me for lunch at 11:00 AM so there is some time available to replace more can lights.  This morning an assembly line was formed, and nine cans were removed and replaced with brand new 120W 2700 degree K dimmable lights.

To reach the ceiling, a two-rung kitchen step ladder was employed.  Bells began to go off, and the brain started to remember two relatively recent incidents where guys, younger than me, fell from such devices and ended up in hospitals. With that in mind, the ladder was always placed next to something reachable.  The older I get the more religious I become; I am now a devout coward! Handrails forever is my motto! 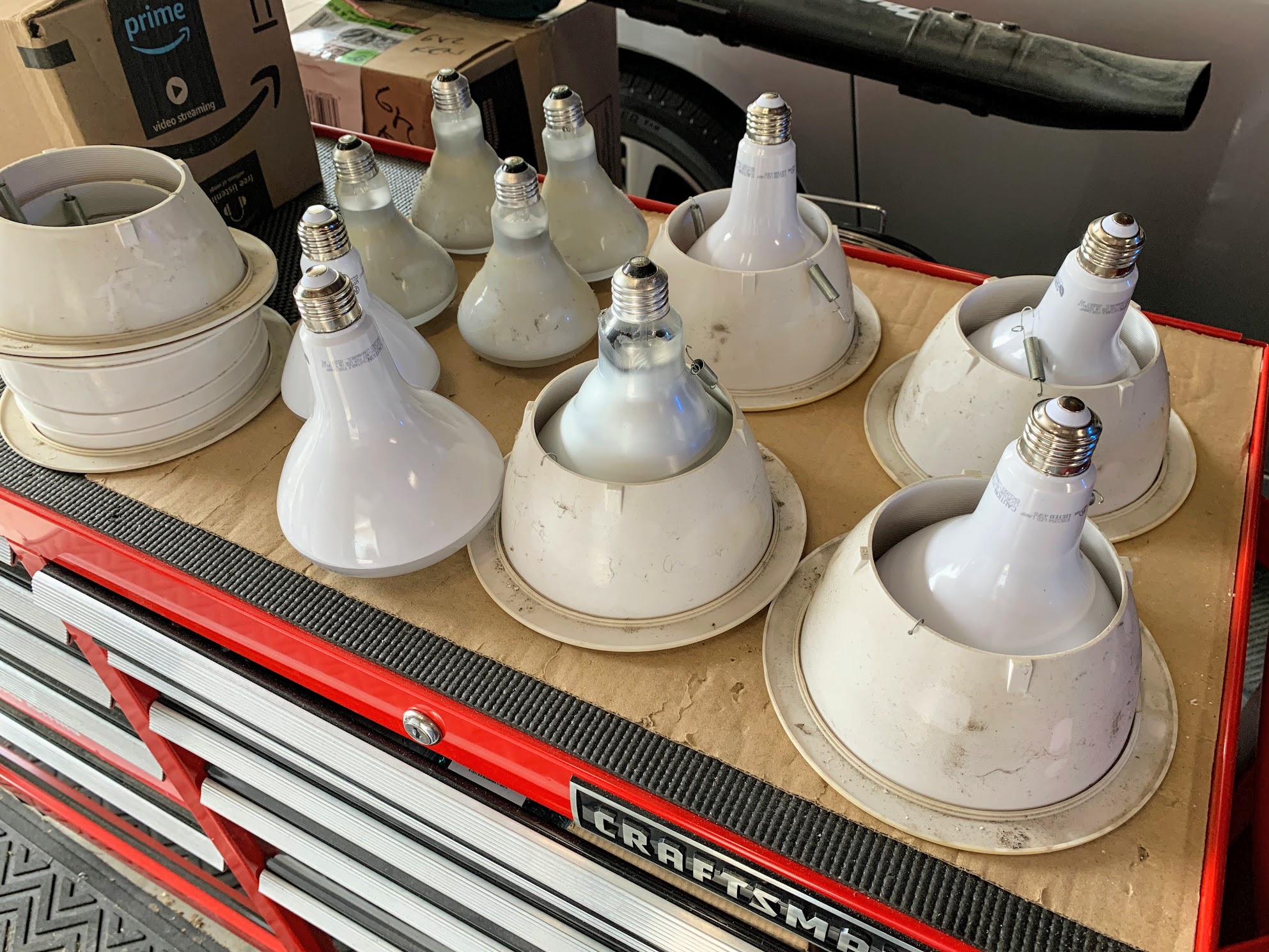 I did it; nine more cans were replaced with up to date LEDs!

The clock indicated 11:00 AM was approaching, so it was time to go to Hoff’s Hut.  Hoff’s has been in our hood for many years, and they just moved to a new location, so it was time to give them some business.  Outdoor dining was in the future.  The decor was unique and the rug was a little stiff but acceptable. 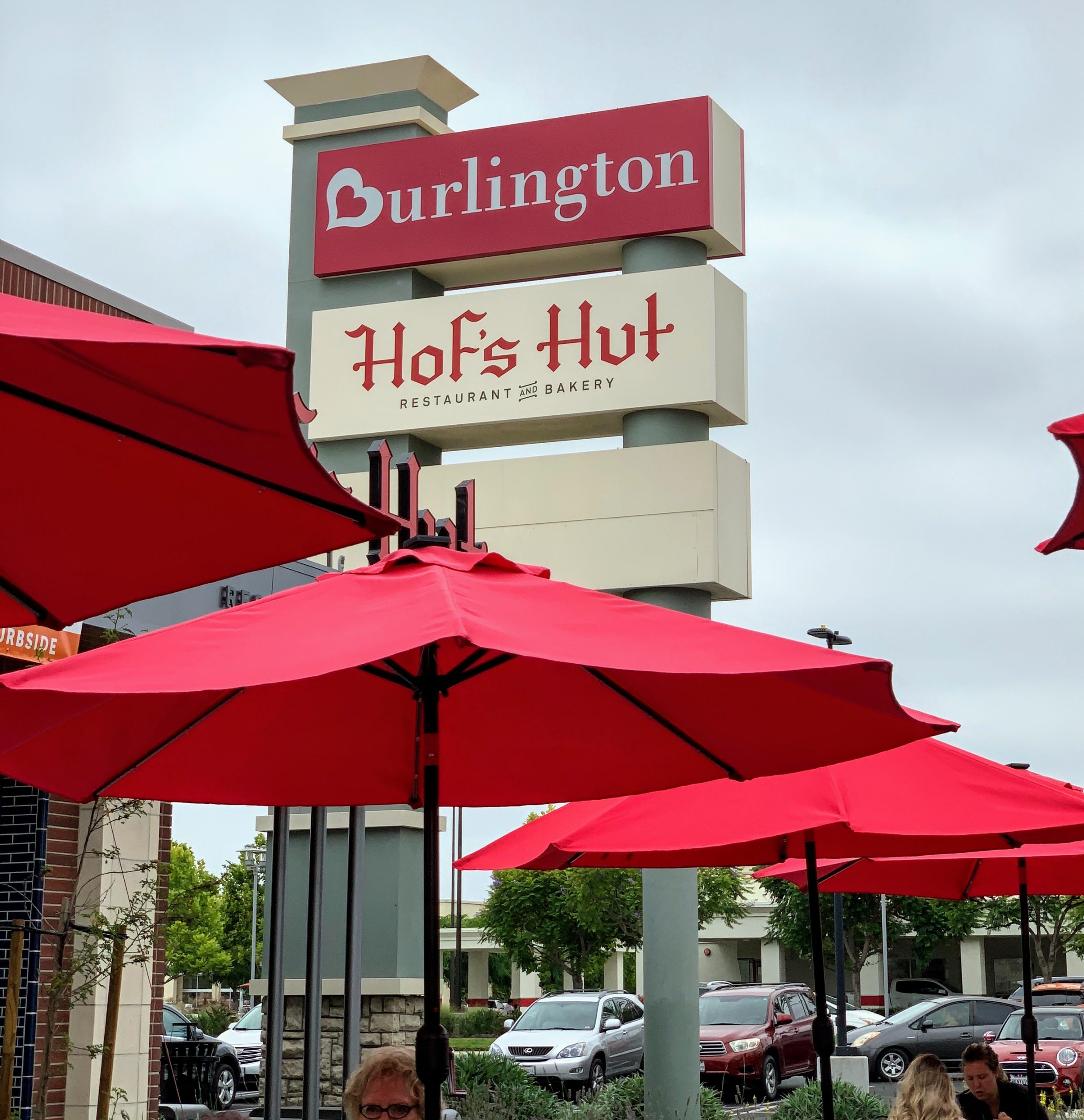 Robin and I tried Hoff’s, and Linda joined us soon after that.

Did You Know? Hofman started with a burger stand on the beach in the 1940s at 5th Place in Long Beach, serving “Hofburgers” for 15 cents.  The first Hof’s Hut opened on September 16, 1951, in Belmont Shore by Harold Hofman, the same day his son and current owner Craig Hofman was born.  In 1975 the chain opened its 9th restaurant,  and in 1993 the chain introduced vegetarian burgers.

Facing competitive pressures, Hofman started the Lucille’s Smokehouse BBQ chain that has taken over some Hof’s Hut locations. Competition from Starbucks, newer casual eatery chains with more exciting atmospheres, and breakfast nooks pressured Hof’s Hut at the start of the 21st century. After various experiments modifying the format at some locations, owner Craig Hofman hit on the Lucille’s Smokehouse concept and has been establishing that chain while reducing the number of Hof’s Hut locations from a peak of 18.

Robin was right on time, and we have a super meal. She, of course, did a salad and the Hoff’s Country Breakfast landed in front of me.  Soon after, the iPhone did its shake, rattle, and role; It was Linda Cathey, and she joined me just as Robin was leaving.  We had lunch again and talked about the Sewer District and other stuff. 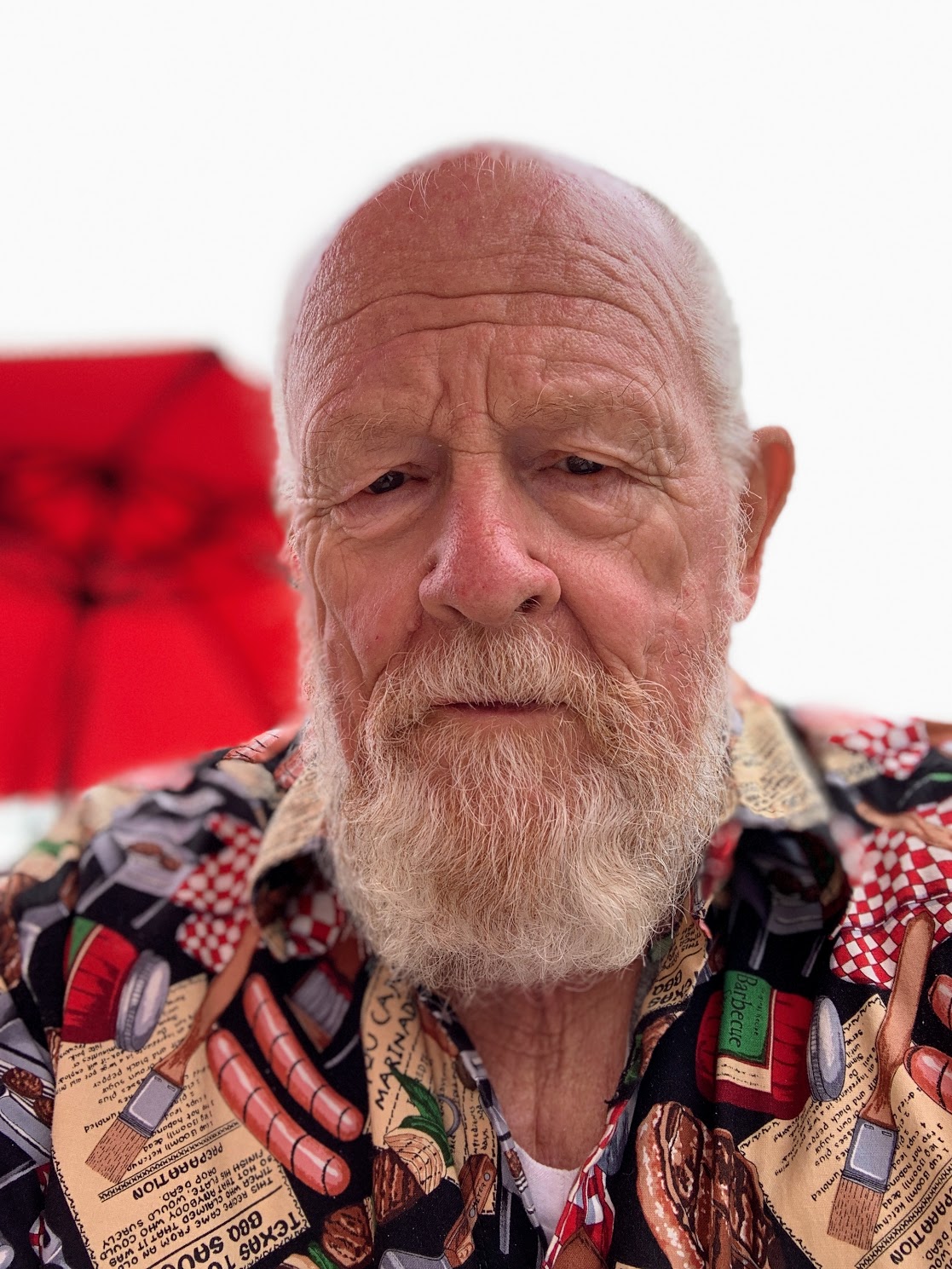 In my dining attire, ladies seem to flock to me, well, at least Robin and Linda!.

Hoff’s is known for its bakery, and this apple raisin muffin was a perfect dessert! 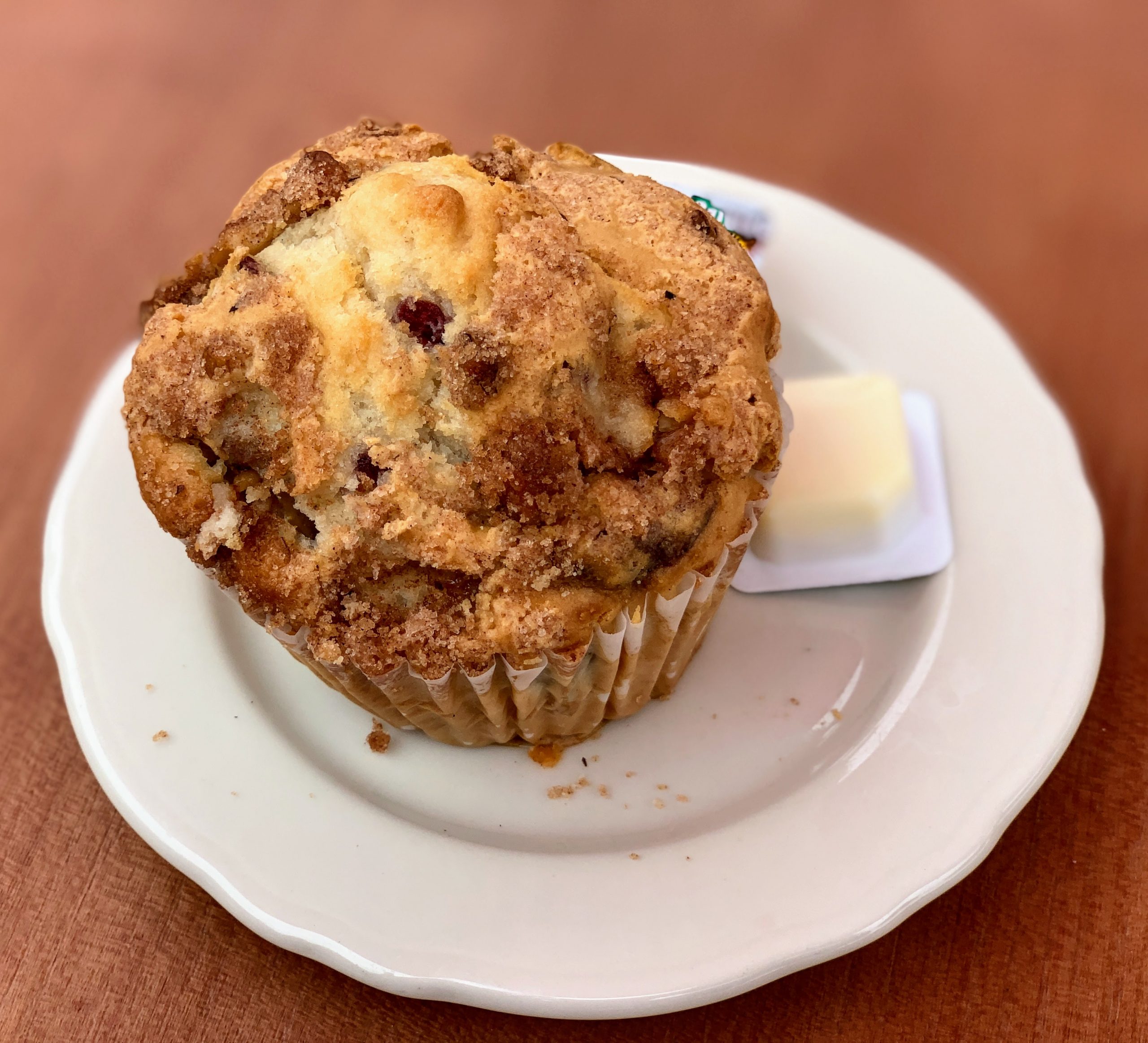 We split it right down the center.

The to-do list was out and on the table, so it was checked.  Stainless steel lag bolts are needed for Friday morning’s arrival of the new gates.  The mission was accomplished by a quick visit to Ganahl. The bright shiny new gates will be installed with new stainless steel hardware. 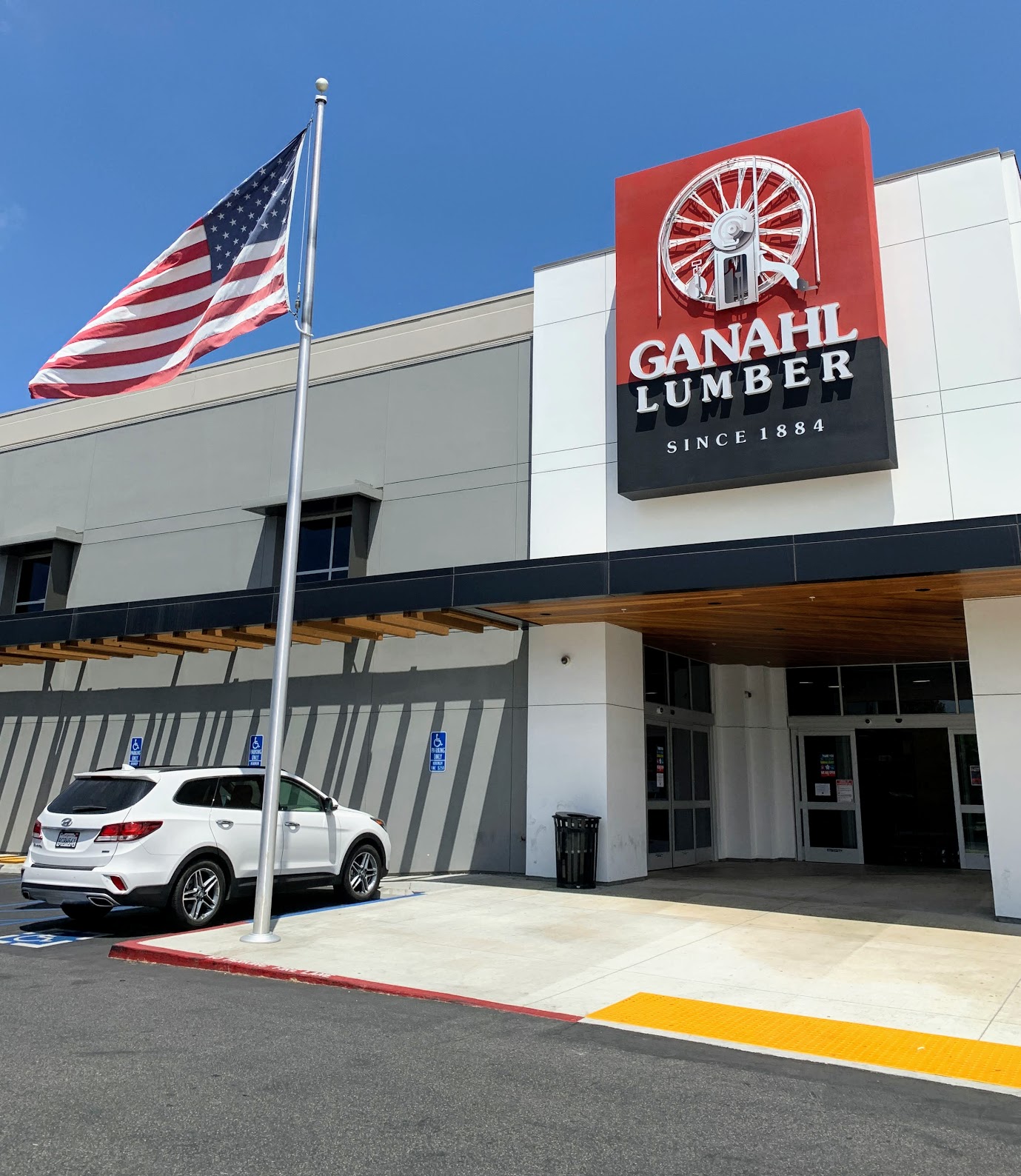 When in need, Ganahl to the rescue.

The sun is beginning to go down, so it is time to walk. The pedal went to the metal, and the noise of screeching tennis shoes was heard for a block.  Note to self:  Look into retreading the tennis shoes.

The first stop was the neighbor’s apple tree, which is loaded with fruit.  Last year the tree was infected with worms that came into the apples via the blossoms.  Having a similar issue with varmints a year earlier, a deposit of a specific apple spray was made to their front door with instructions.  They used the spray as there is no evidence of the pests this year. 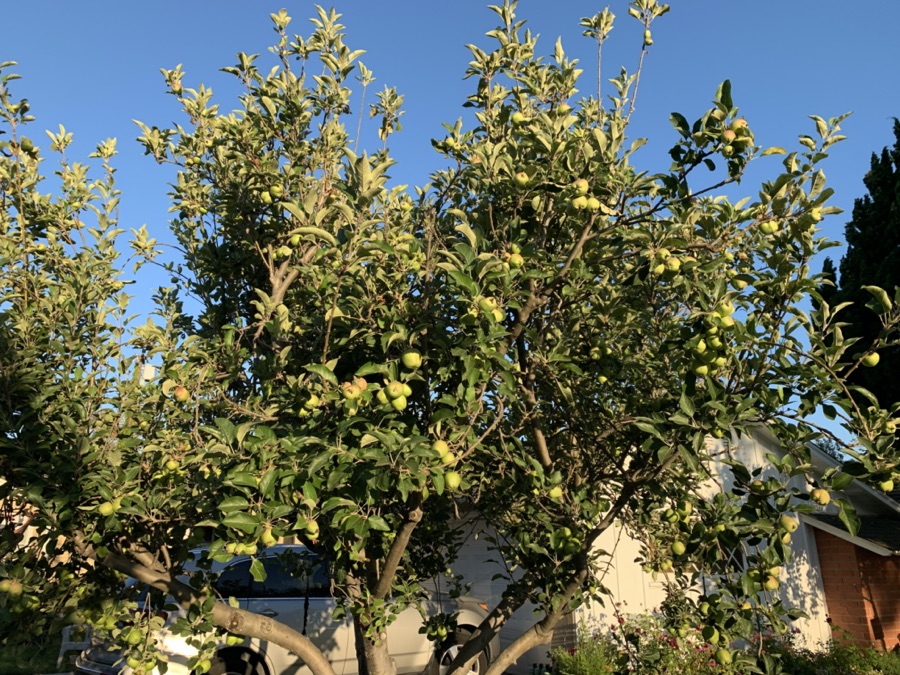 The apples are looking good!

Then a honk was heard. Horns were nearby! Toot toot!  It was too loud for flatulence!  The cacophony of noise was deafening.  The culprit was in full bloom.  This old body was put into high-gear, and the sound was passed quickly. It was still honking even after turning right on the next street. 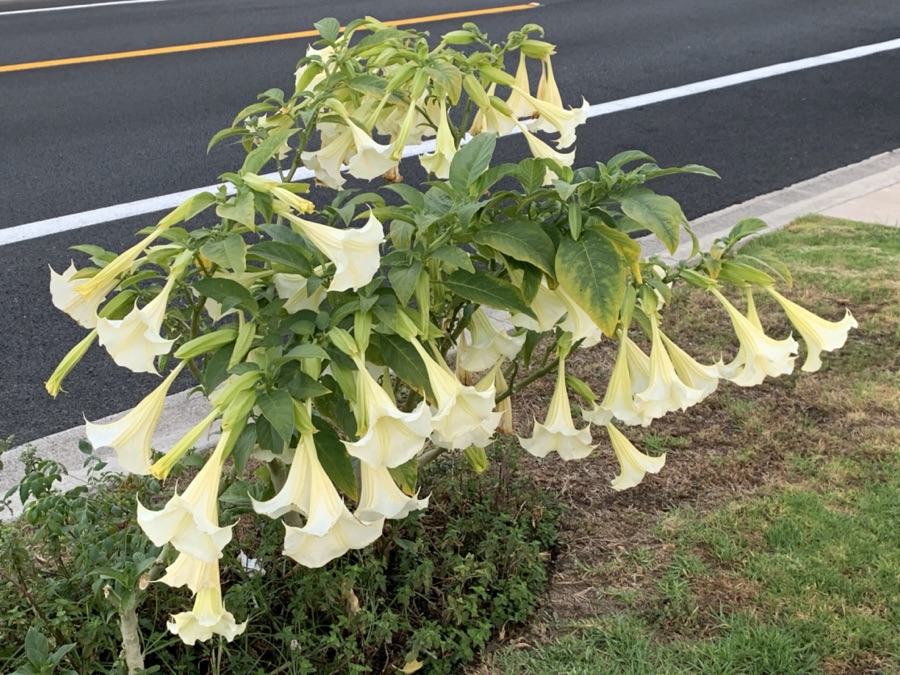 The exercise was shortened by ten minutes today because it was getting cold. The middle of July and it was cool, who would have thunk? 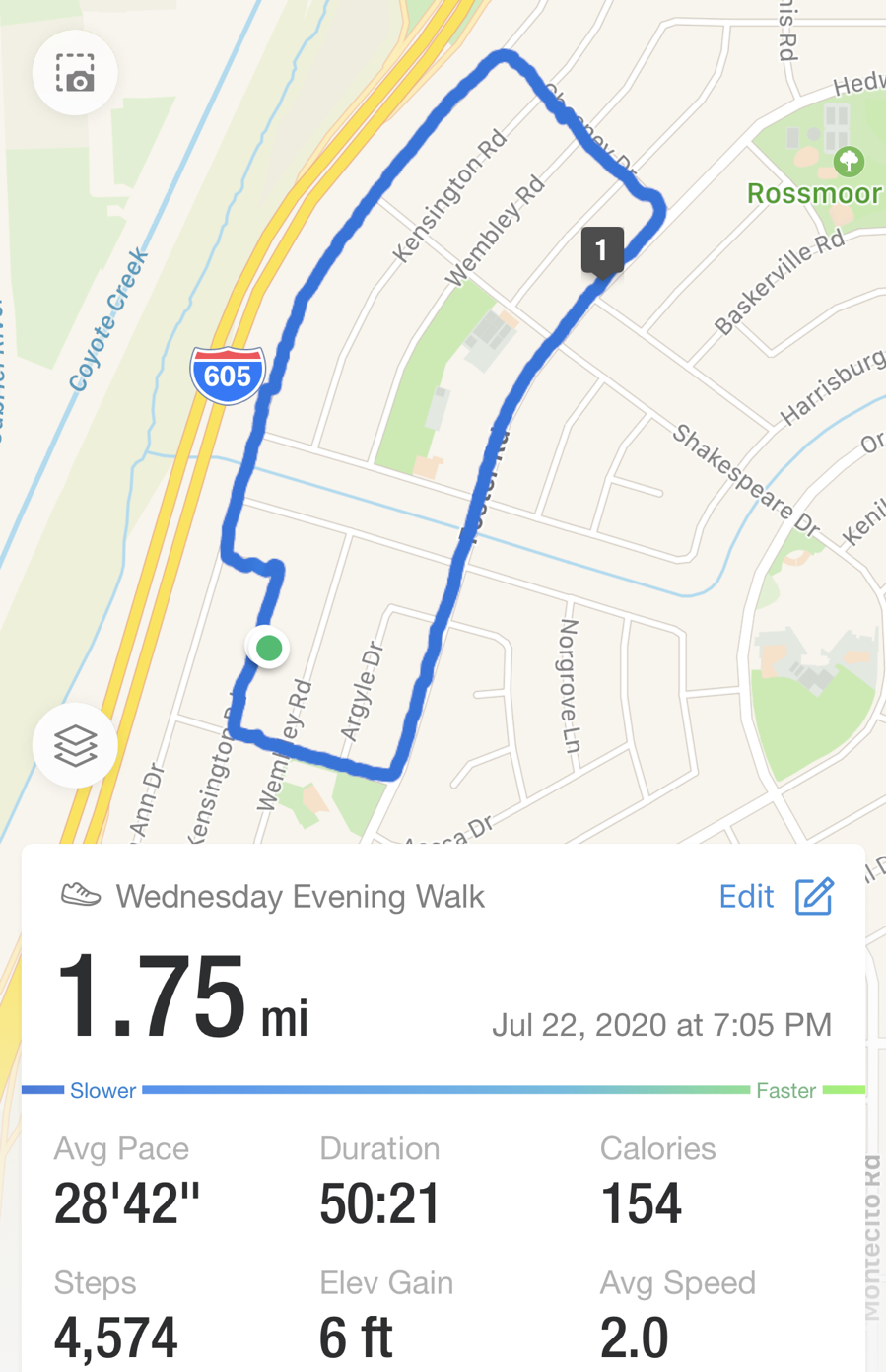 Arriving home, Facebook was checked for new photos of my latest great-grandchild.  Well, Colleen posted a little pink shirt that brought tears to the old eyes; they were good tears.  Great Grandma Sue would approve. Sue really loved all the kids!

Colleen was thinking about Sue, as usual.

The Daily Diary needed some work, and I was wide awake, so the office TV came to life, and I selected Zombieland, the original.  The movie was predictable, “funny,” and it killed some time.  While watching the zombies attack everything,  a noise came through the screen door. The sound was familiar and occurs when the fruit trees are doing their thing. Quick, like a bunny, the powerful flashlight was switched on and aimed at the neighbor’s garage: Eek, a monster sneaking up on my home. Should 911 be called?  Swift consideration was given to making a call but alas, this late at night,  I forgot the number! 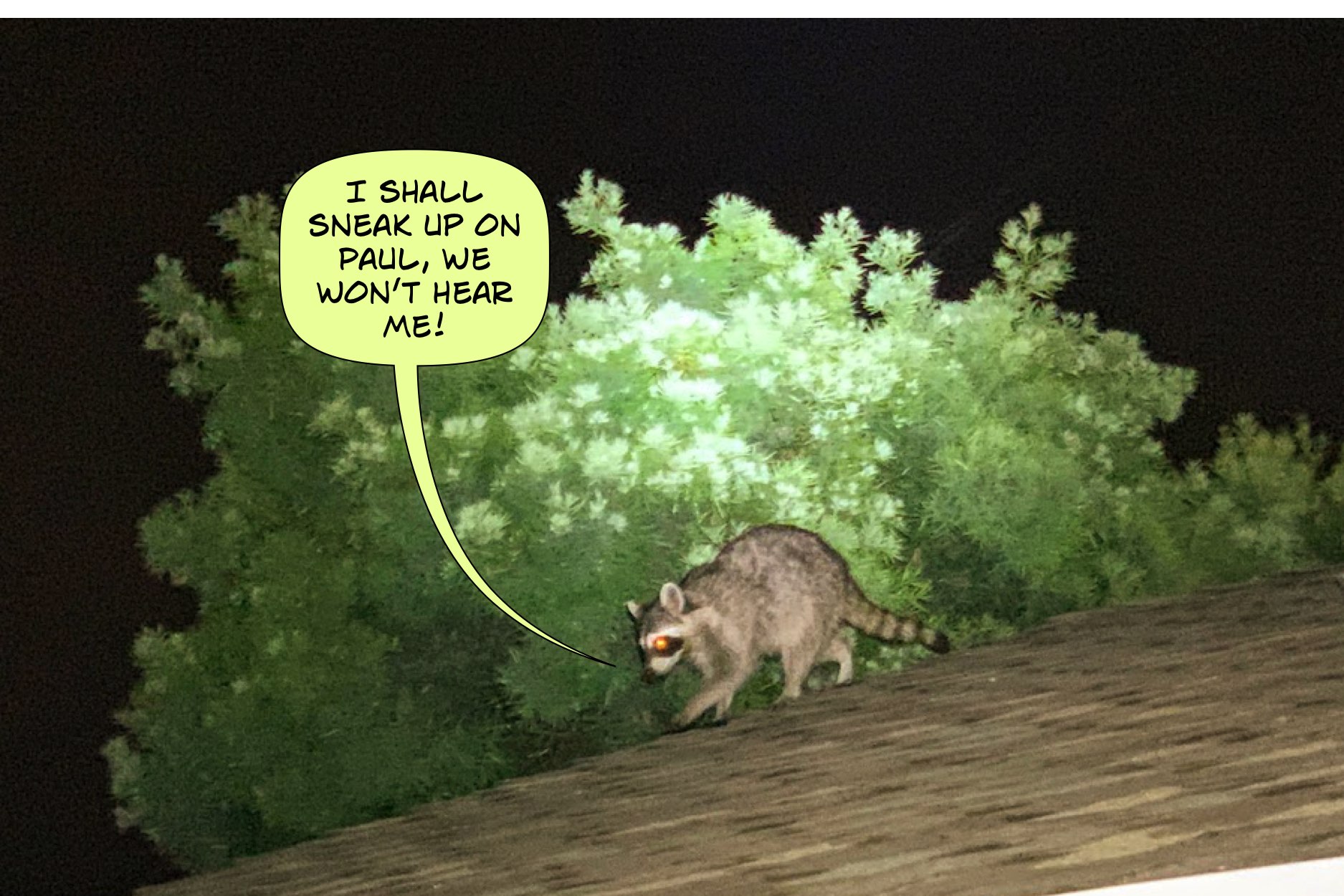 No dining tonight at Chez Liles’

He was brave, and we faced each other for several minutes.  Mr. Raccoon was given a severe dose of my “ugly face” where fangs are displayed, threatening sounds made, and loud growls emanated from deep in my throat.  Much like what is done in the grocery store in the toilet paper aisle.

Mr. Raccoon was wise and headed to another yard to do his nightly foraging; no free lunches here tonight. 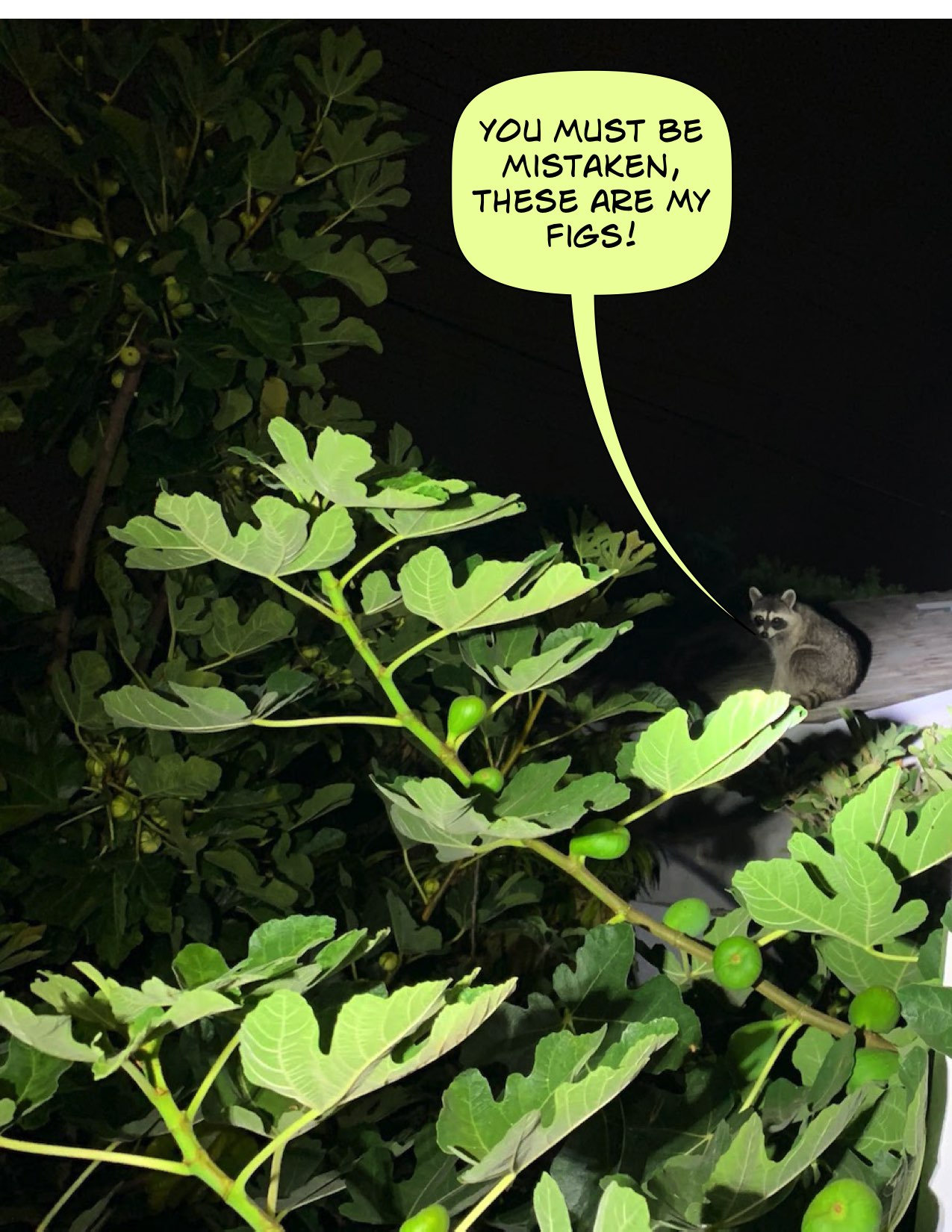 One last check and there she was, snoozing away.  A day old and ninety years ahead of her, quite amazing. 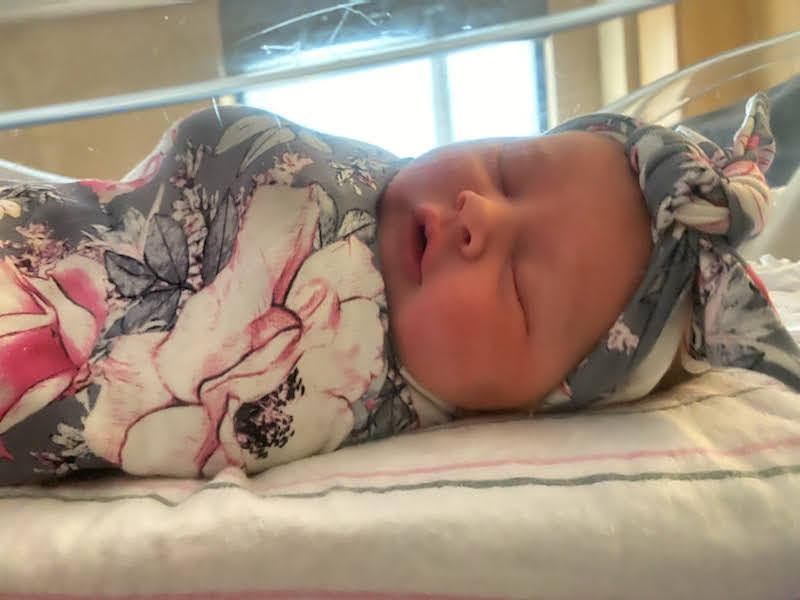 One last cup of coffee before crashing and then the crash!  It has been a good day.  Working around the house, doing the wash, visiting with family and friends, walking to keep the old body in good shape, phone calls to connect with loved ones, and chasing off wild beasts; no wonder Mr. Sandman made his visit a little early.  Good night all!

Just an old retired guy trying to finish out my last years on this planet. I lost my best friend and wife in early 2020. I am involved seriously with a long-time friend, Mary, and life goes on.
View all posts by Paul →
This entry was posted in Dining Out, Family, Food and Wine, Friends, Walking, Working Around House. Bookmark the permalink.