Getting Ready For Diane! Birthday Dinner With Bob & Donna

No Kidding!  Steamboats carried both people and animals. Since pigs smelled so bad they would be washed before being put on board. The mud and other filth that was washed off was considered useless “hog wash”.

OK… Off on a walk heading for mile number 585 today…600 miles is well within reach in the next few days!  No target today, just a walk around the periphery of the hood!  Two hours and a good four miles. 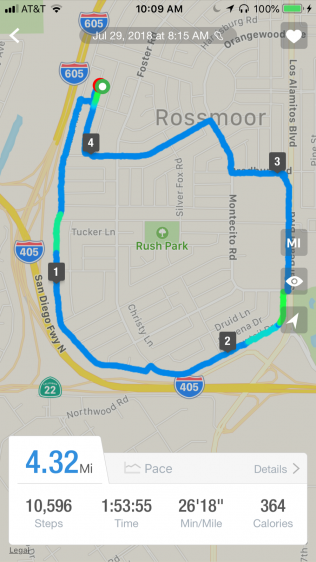 This is the long way around but new things are good

Right around the corner from us is a Christmas Tree or the remains of one anyway!  Never noticed it and I have been walking past it for eight months!  The contents of the glass balls are a little worse for wear but still kinda interesting! 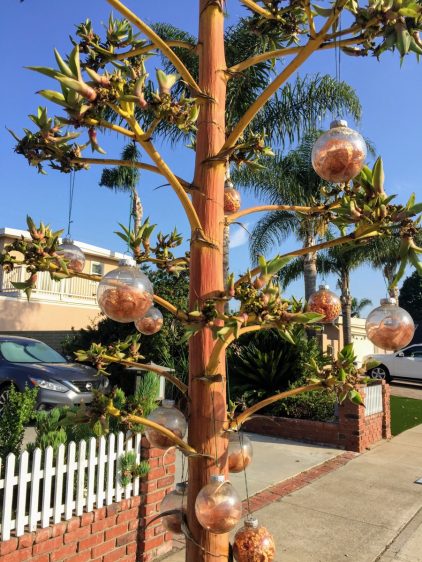 The sky was blue today with hardly a cloud in the sky so the background was super for shooting the taller shrubs in the hood. The tree is a Crepe Myrtle and it was will taken care of as evidenced by the pruning and amount of flowers. 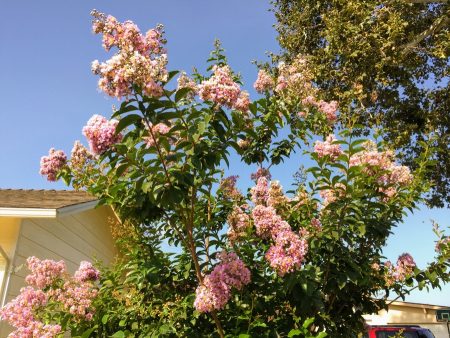 Flowers are pretty against the blue sky background

The local Hibiscus plants seems to go wild in our area perhaps because of the proximity of the ocean?  The colors range from white to red and include pinks and purples.

Did You Know? The health benefits of hibiscus tea include relief from high blood pressure and high cholesterol, as well as digestive, immune system, and inflammatory problems. It helps to cure liver disease and reduces the risk of cancer. To lower blood pressure, health professionals with the University of Michigan Health System recommend infusing 1 cup of water with 1 to 2 teaspoons of dried hibiscus flowers. You can consume up to three cups of hibiscus tea daily 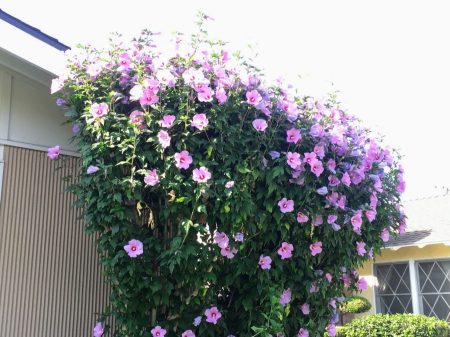 Today’s route passes by the famous treehouse which we are always amazed by.  Supposedly this was a tribute to the passing of the husband who lived here.  It is quite a structure and always seems to be decorated for the major holidays! 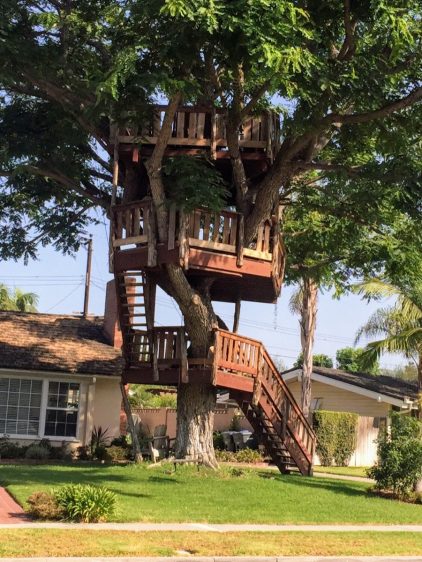 High in the sky

Random Memories: I had a “tree house” on Comey Avenue in Los Angeles.  It was not exactly a house but more a platform hidden very well inside a “paper tree”.  I cannot remember the real name but researching it revealed it was probably a Melaleuca quinquenervia (Cajeput) which is am evergreen. 20-40’ x 15-30’. Thin, spear-shaped gray-green leaves. Wispy white flowers in spring. Peeling, spongy
white bark, with sections of dark gray or even black.

It was about 40 feet tall and the platform was at the thirty-foot level as I could see the neighboring houses.  I had a block and tackle system so I could life heavy things into the tree and onto the platform…heavy, like bikes.  Why would you need a bike in a tree…I have NO idea but I remember doing it! 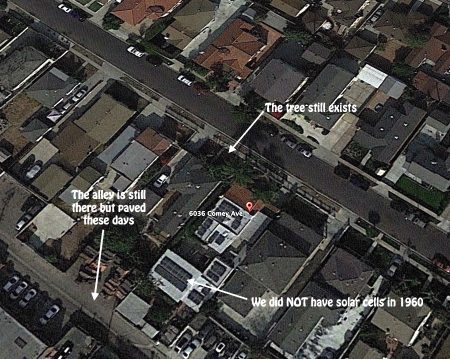 Back to 2018…as I was chugging along, I passed a cat walking the other direction.  He did not know what to do when he saw me so we passed within inches of each other…he was surprised and so was I.  As I passed, I turned around and could almost hear him say something. 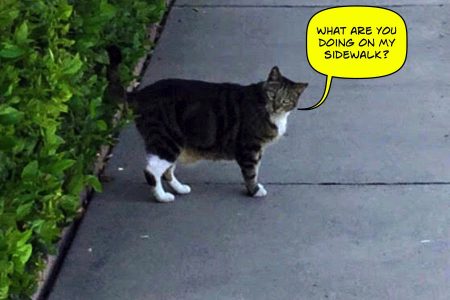 Are you talking to me?

I resisted my temptation when I passed In-N-Out but it was easy…they were not opened yet!  It’s been there about two years and we have yet to get a burger there…always too busy! 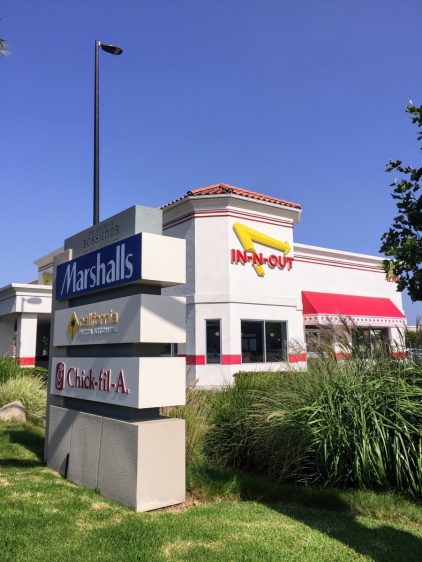 Mother Nature again being creative with her pinks and purples!  The flowers look fantastic without any water for weeks on end!  Succulent comes from the Latin word “sucus,” which means juice or sap. It’s also a nod to the nourishing leaves that help these plants survive in extremely warm conditions (aka you only have to water yours once a week, since they thrive in sunlight and dry air). 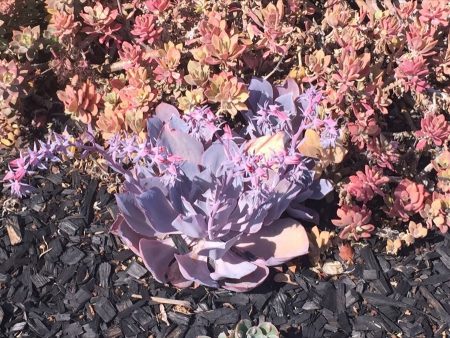 Succulents are pretty amazing adaptations in the plant world.

Back home and I did a quick check on my plumb trees.  They are loaded but if I do not get there first, the fruit seems to disappear!  Since I like sour, I pick them a little ahead of their 100% ripening!  Mature plum fruit may have a dusty-white waxy coating that gives them a glaucous appearance. This is an epicuticular wax coating and is known as “wax bloom”.

Chemically, it consists of hydrophobic organic compounds, mainly straight-chain aliphatic hydrocarbons with a variety of substituted functional groups. The main functions of the epicuticular wax are to decrease surface wetting and moisture loss. Other functions include reflection of ultraviolet light, assisting in the formation of an ultrahydrophobic and self-cleaning surface and acting as an anti-climb surface. 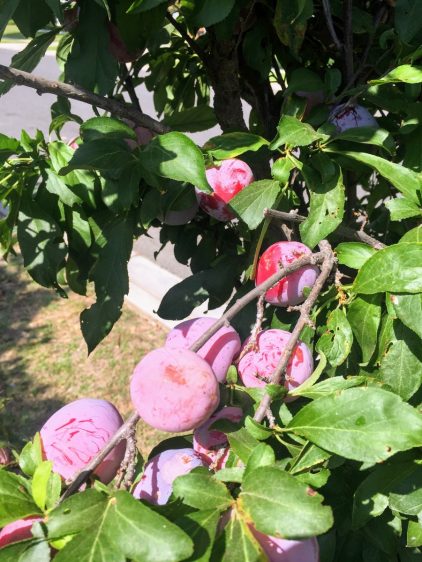 The white “powder” on the fruit is a natural occurring protection

We had lunch and then I finished off the side yard… Looking OK for Diane’s arrival! Another added advantage, O can climb into the bed and pick the ripening figs!

We watched some TV and then got ready to go to Il Garage to celebrate Donna and Sue’s birthdays.   Sue’s birthday was July 10th and Donna’s birthday is August 3rd. It Garage is on Beach and Katella (a block or so south) and is in an old farm equipment  garage which was used to house tractors on the large vegetable farm that once occupied the area.  The food is quite interesting as a lot of it comes from this and other gardens owned by the restaurant, 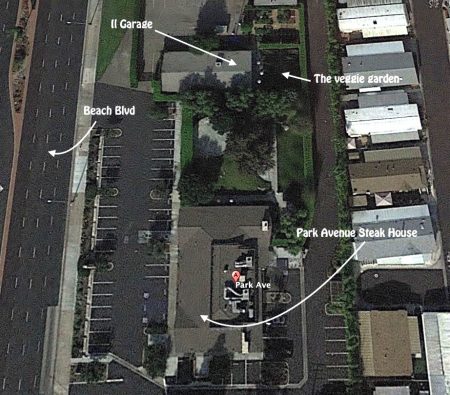 We had our pre-dinner drink and then headed for a short walk in the vegetable garden!

Did You Know? On November 6, 1905, the Los Angeles Interurban Railway started service on the Santa Ana Line. It ran along an almost perfectly straight line between Watts and Santa Ana. Access to transportation allowed the population of the rural area, which is now Stanton and West Anaheim to grow.

Stanton was named for Philip A. Stanton, a Republican assemblyman for Los Angeles from 1903 to 1909.

In 1908, the privately owned Pacific Electric Railway leased the Santa Ana Line and took over the service extending its regional light-rail system. By 1928, the impressive thousand-mile system allowed the residents to conveniently travel throughout Los Angeles and Orange Counties. See 1928 Map. The passenger service to Santa Ana was discontinued in 1950, shortly after the railway was taken over by the Metropolitan Transportation Agency. Today, the easement still is owned by the Orange County Transportation Authority (OCTA). It crosses the intersections of Beach Boulevard/Pacific Street and Cerritos Avenue/Western Avenue.

The first City of Stanton was incorporated in 1911 and at the time was the largest city in Orange County by area.[12] The main motivation for incorporation was the City of Anaheim’s plan to build a “sewage farm” to the west of their city. The former Speaker of the California State Assembly Phillip Ackley Stanton assisted in the incorporation and the city was named Stanton in his honor. In 1924 the residents voted to dis-incorporate to avoid the cost of building roads in the City. 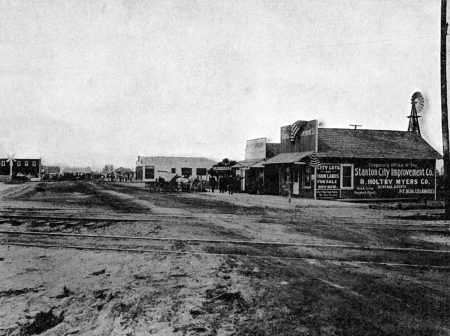 Downtown Stanton 1913…The farm may have been there!!

Exploring the garden and examining the crops is always fun with these two! 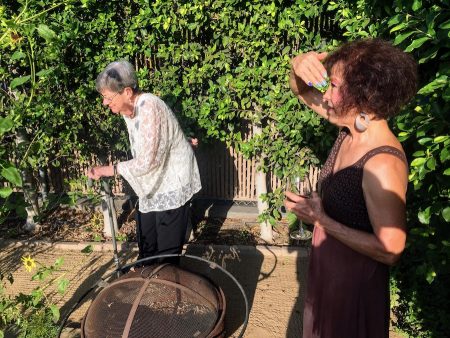 When Donna and Bob and we get together, it is a non-stop laugh-fest!  We were seated about 5:30 PM and departed around 8:45 PM and the giggling did not stop!  Sue was in hog’s heaven as many of their dishes were vegetarian.  Paul had the Shepard’s (Seafood) Pie and it was terrific.  He planned to take half of it home…he did… in his stomach! 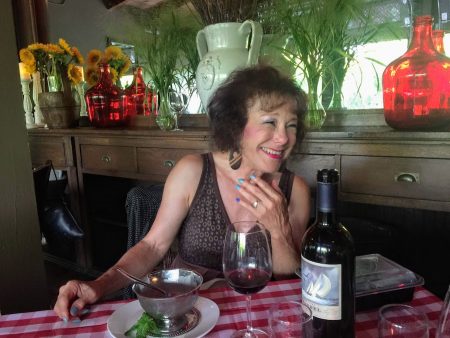 Happy birthday ladies.  These two went to high school together half a century ago!  They did not know each other then but knew some of the same people.  We met 20+ years ago and just so enjoy they company.  Bob and Paul could have been twins (except Bob is so much more handsome… I was paid to write that! 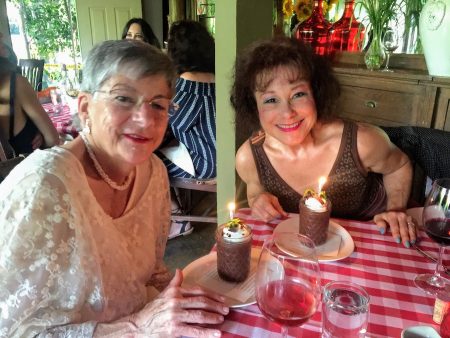 We departed for home, watched some TV before crashing.

Just an old retired guy trying to finish out my last years on this planet. I lost my best friend and wife in early 2020. I was blessed again by reconnecting with Dr. Mary Côté, a long-time friend. Mary and I got married July 28th, 2021, and are enjoying life together and plan to spend the rest of our lives being a blessing to our friends and family.
View all posts by Paul →
This entry was posted in Food and Wine, Friends, Walking and tagged Dining Out, Friends, Random Memory, Walking. Bookmark the permalink.