Love Our Saturdays… Actually Love Everyday… We Be Retired!

Today I worked in the yard and did not go on the usual walk but that’s OK, I still “walked” for nearly two hours busted up by occasional clipping, pulling, and lifting of plants in the garden.  Yes, I was careful NOT to tear the stitches or get them dirty.

I trimmed the south side of the house “tree garden” meaning the pumpkins were cleaned out, watermelons trimmed back, and three figs slightly trimmed.  Sunday morning I will get the clippings collected and put into trash barrels.  I found three pumpkins amongst the brush and pulled them out for storage…HAlloween is right around the corner.  If I can find a nice place on the north side of the house off the cement, they should last until last October. 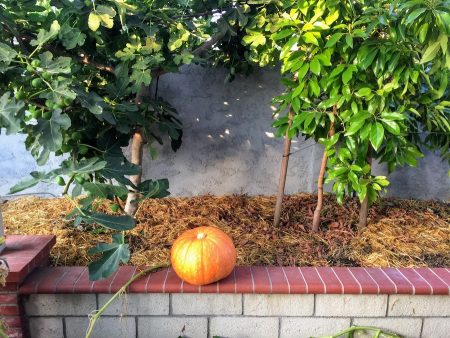 This was the smallest of three I found in the bushes

As you can see, our” little” fig three is going crazy!

Did You Know? Fig tree flowers are actually hidden inside the fruit, which led many early cultures to believe the plants to be flowerless. 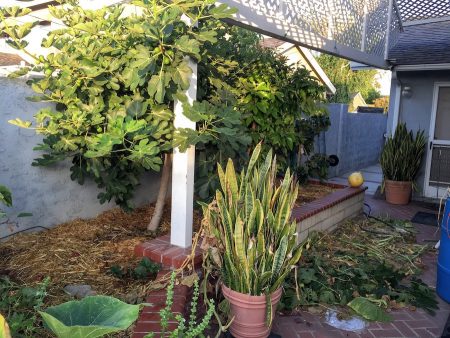 The fig tree is going into production overload!

We watched NCIS in the late morning and then off to the theater to see “School If Rock” at the OC Performing Arts Center.

Hate to say it but we left the performance at the half-way point.  Not our cup of tea.  We should have known when we saw three guitars and a set of drums as the only instruments on stage…it wasn’t “music”..it was loud noise punctuated by cute kids!  While we acknowledge the kids who played as probably having some talent, they certainly did not have any appreciation for rhythm or acoustic decency! Too bad they could not be steered toward real music…alas, a lost generation or two. 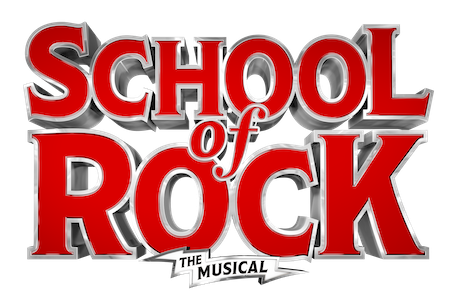 Loud and obnoxious at best!

The “plot” was kinda blah! May have been OK if  the music they were playing was listenable but the kids sounds and the bands sounds were equally horrible so any attempt at comparing the two was impossible.

The “plot” summary: Overly enthusiastic guitarist Dewey Finn  gets thrown out of his bar band and finds himself in desperate need of work. Posing as a substitute music teacher at an elite private elementary school, he exposes his students to the hard rock gods he idolizes and emulates — much to the consternation of the uptight principal. As he gets his privileged and precocious charges in touch with their inner rock ‘n’ roll animals, he imagines redemption at a local Battle of the Bands. 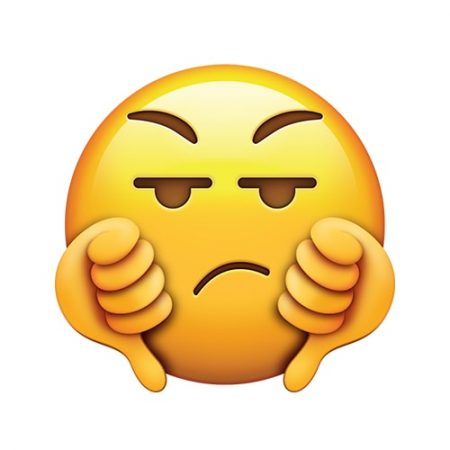 It’s too bad we are raising a generation that can’t appreciate music and will be going through life without the enjoyment to tapping their toes to music and listening to meaningful lyrics that can be heard over the instruments.

The good thing as we got home early and watched some more NCIS (season five) before heading to GG Elks for some dining and dancing!  We laughed and giggled with friends until 9:30 PM at which time we headed home for the evening.

Vicky, Donna, Sue, and Marcia all got together at the end of the table and laughed themselves silly.  They were recalling the time Sue and I bought marbles to replace the ones Mike dropped during his art class.  Take a peek at the YouTube video! 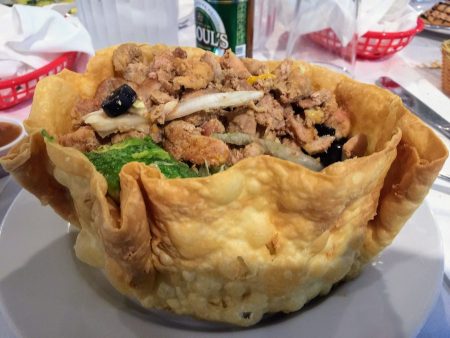 Just an old retired guy trying to finish out my last years on this planet. I lost my best friend and wife in early 2020. I was blessed again by reconnecting with Dr. Mary Côté, a long-time friend. Mary and I got married July 28th, 2021, and are enjoying life together and plan to spend the rest of our lives being a blessing to our friends and family.
View all posts by Paul →
This entry was posted in Dancing, Food and Wine, Friends, Gardening and tagged Dining Out, Elks Lodge, Theater. Bookmark the permalink.