Remember: If the shoe fits, get another one just like it.

No walking today…just getting ready to see the doctor at 1:30 PM.  We arrived right on time and the doc was ready for us.  He went through the procedure saying it could take up to four hours…he began at 1:30 PM removing a hunk of flesh about the size of a half- dollar.  It got larger after he got everything and made the incisions so he could stitch it up.

They took the removed flesh immediately to the laboratory where they were looking for “clear margins” meaning ALL the cancer cells were inside the piece extracted (otherwise he would have to make it larger border and examine it again).  The lab took about 40 minutes and the answer was… GOT ALL OF IT! We were relieved!

The surgeon suture the wound up doing two layers of sutures.  I watched the whole thing and felt not a hint of pain..thank you lidocaine! Lidocaine is a local anesthetic (numbing medication). It works by blocking nerve signals in your body. Lidocaine topical (for use on the skin) is used to reduce pain or discomfort caused by skin irritations such as sunburn, insect bites, poison ivy, poison oak, poison sumac, and minor cuts, scratches, or burns.

Did You Know? Surgical suture is a medical device used to hold body tissues together after an injury or surgery. Application generally involves using a needle with an attached length of thread. A number of different shapes, sizes, and thread materials have been developed over its millennia of history. Surgeons, physicians, dentists, podiatrists, eye doctors, registered nurses and other trained nursing personnel, medics, and clinical pharmacists typically engage in suturing. Surgical knots are used to secure the sutures.

The stitches will come out in two weeks and then another two weeks of not putting a lot of pressure eon the wound…i.e. no golf or gardening and be careful with dancing. 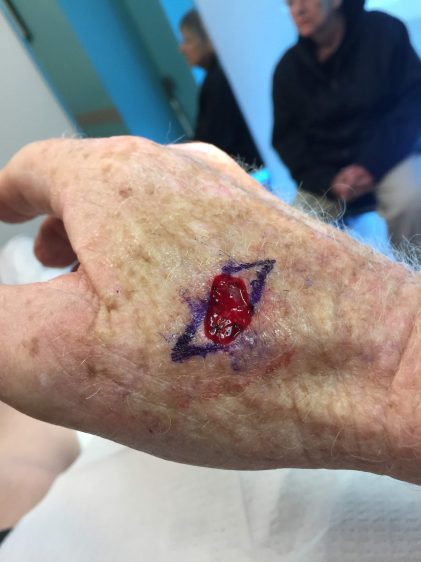 Random Memory: Way back in the early 1950’s I was climbing over a white picket fence and slipped.  It was across the street from my house and I think the fence belonged to the Perkins.

I knew I hurt myself as I needed assistance to get off the fence. but didn’t think too much about it.  I should have kn own because the jeans were torn where the wooden picket when through the jeans and into me!

About two hours later, I headed for the shower… I was probably nine years old…and I looked down and something was not right.  Part of my intestines was hanging out and I had blood running down my leg.  It was embarrassing (for a nine year old) so I called my dad and asked “what’s going on??”

He looked, nearly passed out, and called mom…she took a look and immediately called the doctor…this was at 8:00 PM!  The doc showed up about 20 minutes later with his little black leather case and examined me.

I had poked a hole on my lower belly (just above the family jewels) allowing the inside to come outside.  The doc did not panic, just casually opened up his bag, gave me a shot (probably tetanus), proceeded to clean up the wound an then out came the knitting needles…well, the needles looked pretty big.

He sewed and sewed and put in about ten stitches that I could see.  He put on tape and gauze and said to stay still for a day so as not to pull out the stitches.

I went to his office a couple of days later and be pronounced my OK and then a week later they pulled out the stitches.  It always amazed my that the doctors in the time frame carried everything they needed in the little black bag! 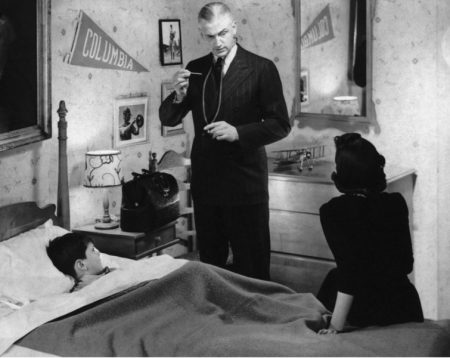 We returned home about 4:00 PM after going to CVS to get some fresh hydrogen peroxide, wound oil, and a few large bandages.

Concentrated hydrogen peroxide, or “high-test peroxide”, is a reactive oxygen species and has been used as a propellant in rocketry. Its chemistry is dominated by the nature of its unstable peroxide bond.

Historically hydrogen peroxide was used for disinfecting wounds, partly because of its low cost and prompt availability compared to other antiseptics. It is now thought to inhibit healing and to induce scarring because it destroys newly formed skin cells.

We arrived home and Sue became the “helicopter Mom” making sure I did nothing to put strain on the wound.  We watched NCIS until almost midnight before crashing…just after having our late evening tookies!

Just an old retired guy trying to finish out my last years on this planet. I lost my best friend and wife in early 2020. I was blessed again by reconnecting with Dr. Mary Côté, a long-time friend. Mary and I got married July 28th, 2021, and are enjoying life together and plan to spend the rest of our lives being a blessing to our friends and family.
View all posts by Paul →
This entry was posted in Just Us and tagged Doctor, Just Us, Random Memory. Bookmark the permalink.