He Is Such A Cut Up

Being cute is something Paul is used to but being fair skinned is something he just don’t like a lot. Why? Getting sun burnt, and now at the ripe old age of 75, Paul is getting skin cancer all over.

Did You Know? A group of light-skinned Europeans Light skin is a naturally occurring human skin color, which has little eumelanin pigmentation and which has been adapted to environments of low UV radiation.  Light skin is most commonly found amongst the native populations of Europe and Northeast Asia as measured through skin reflectance.

It has been hypothesized that dark skin pigmentation was the original condition for the genus Homo, including Homo sapiens. However, as populations migrated away from the tropics between 125,000 and 65,000 years ago into areas of low UV radiation,  they developed light skin pigmentation as an evolutionary selection acting against vitamin D depletion.

Paul noticed three area on his skin, two on the hand and one on the right temple, that seemed abnormal so off to the dermatologist we went.  By abnormal, the “bumps” would not go away with standard meds.  They were “hard” and nothing Paul had ever seen before. Both were identified as squamous cell carcinomas which mean they have to be dealt with immediately.

So now we have a new plastic surgeon, who BTW, we really really like. Joshua Waltzman of Long Beach has a great personality and takes the time necessary to explain what is going to happen. 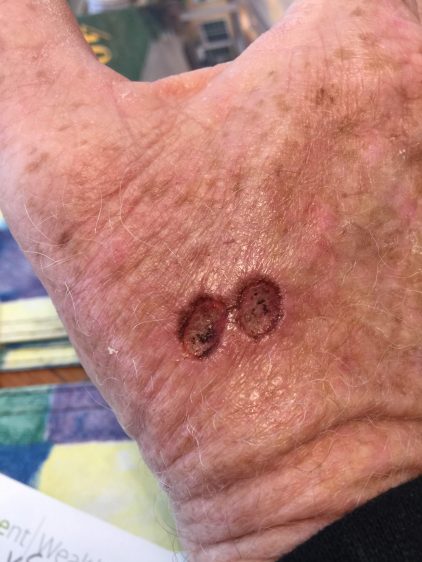 The results of the biopsy and the area around them must go!

Today the doc decided to do the head as the hand was going to take more time that he originally anticipated. 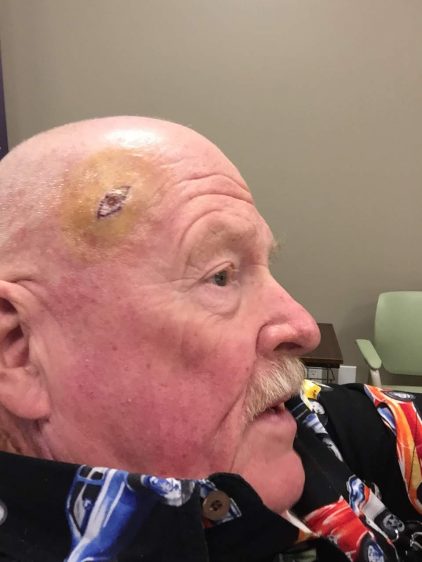 The lines have been drawn… Time to cut! Damn…looks like Paul has a third eye!  Easier to watch you!

Did You Know? Cancer can be considered a very large and exceptionally heterogeneous family of malignant diseases, with squamous cell carcinomas comprising one of the largest subsets. Squamous cell carcinomas arise from squamous cells, which are flat cells that line many areas of the body. Accumulation of these cancer cells causes a microscopic focus of abnormal cells that are, at least initially, locally confined within the specific tissue in which the progenitor cell resided. This condition is called squamous cell carcinoma in situ, and it is diagnosed when the tumor has not yet penetrated the basement membrane or other delimiting structure to invade adjacent tissues.

Once the lesion has grown and progressed to the point where it has breached, penetrated, and infiltrated adjacent structures, it is referred to as “invasive” squamous cell carcinoma. Once a carcinoma becomes invasive, it is able to spread to other organs and cause the formation of a metastasis, or “secondary tumor”.

Returning home about noon, we had a great lunch with…yes, fresh corn on the cob!  Paul worked around the garden for a while and then came in to watch a movie before going to Malanies to meet with Irene.

We had a great time and planned for this weekends adventure!  We departed Malainey’s Grill & One Hell of an Irish Bar as the sun sank into the ocean. 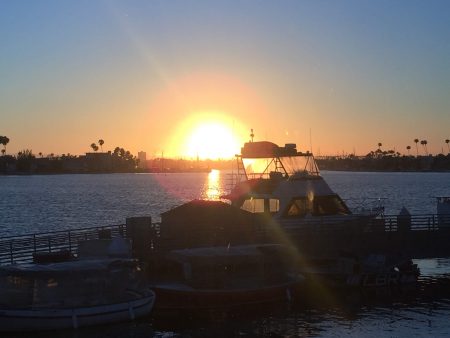 Splat and the sound of steam came from the west as ol’ Sol took his evening bath!

We returned home and watched TV before crashing about midnight. Yes, we had our 10:00  PM tookies with Chef Paul at the oven!  Thank you Miss Wakefield!  Huh?

Did You Know? Ruth Graves Wakefield (June 17, 1903 – January 10, 1977) was an American chef, best known as the inventor of the Toll House Cookie, the first chocolate chip cookie, which she created. She was also a graduate and educator, a business owner, a chef, and an author.

Just an old retired guy trying to finish out my last years on this planet loving my best friend and wife, having fun, learning, and passing on helpful things to others.
View all posts by Paul →
This entry was posted in Friends, Just Us and tagged Doctor, Friends, Malarkeys. Bookmark the permalink.
Powered by Maribol IMDB Plugin