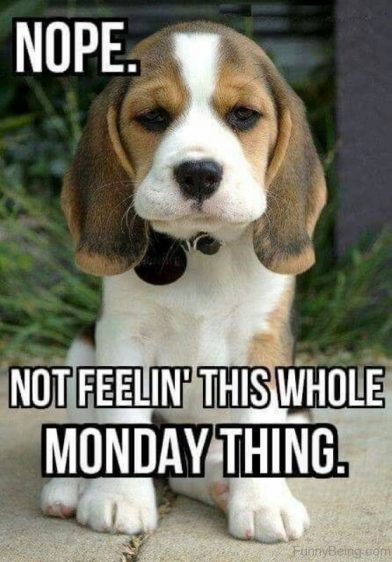 …we just have to deal with it!

So Paul decided not to walk today as he had a plan in mind…work!  We have a 30+ year old garden swing that seats 3-4 people comfortably but the cushions have worn out and faded and just got grimy  over the years. The frame is in excellent shape as we wax it and keep it covered during the winter months! 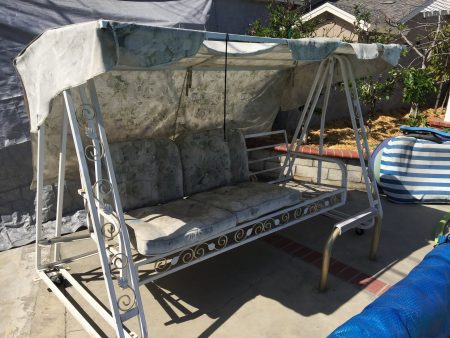 The swing has so many memories as Sue used to rock Zachary to sleep in it when we babysat Zack on his parents “date night”.   Our mother’s used to sit in this swing and jabber like two school girls when they visited us!  Our aunt/uncles used to love this swing and sought it out whenever they would visit.

So Paul got on the internet and found a company that replaces cushions. Our local store, Anaheim Fireside And Patio, went out of business two years ago so we had not idea of brand name of the swing.

We called a company on Pomona and volia, they suggested we send pictures…we did and they knew the manufacturer of the swing including the part numbers of the replacement cushions/top  and could replace the cover and the three sets of cushions for a mere $1150!  Decision time…duh, we ordered replacements.

Since we do NOT use the pool a lot anymore, Paul decided to move the swing to the front yard and that was a lot of work,  While it is on casters, which Paul put on last year, it could not go around the planters and under the Lime tree anymore.  Paul ended up taking the swing totally apart but that was a good thing.

Paul replaced all the hardware with stainless steel and oiled/greased the swing getting it ready for the new cushions which will arrive in about a month!

We watched a movie in the late afternoon as Paul was dragging from all the swing related work!  One piece was so heavy that Paul asked our gardener to give him a hand and thank goodness that made it possible to complete the move today!

Random Memories: Ratched back to the late 1940’s and early 1950’s, Aunt Opal had a garden swing much like our but in those days the material was canvas.  That swing would sit three people comfortably. The swing was on a chain and set inside a steel frame and the seat bounced slightly.  When we visited Aunt Opal I would make a beeline for that ol’ wing and rock in it for what seemed like hours…since I was probably only eight, I’ll bet I stayed in it for 2-3 minutes at a time  The swing’s canvas was a dark green print of green leaves and it was under a tall oak tree in the back yard!

It’s Monday kiddies and what does that mean?  Malarkey’s, yes! This evening it was just Irene and us so it was quite enjoyable! 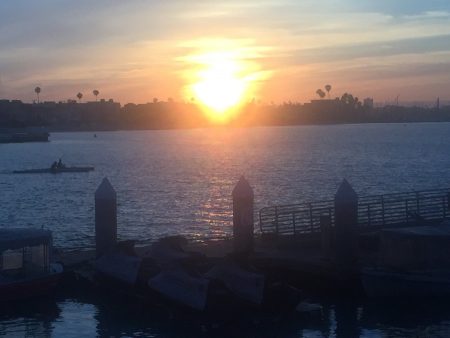 The sunset was quite spectacular with the oranges and reds each outdoing themselves. The yellow ball of fire changed to hues of orange, and then almost tangerine. It merged with the sky, like juice-mix dissolving in a glass of water. The clouds were cotton-candy, as though they blushed at the warm touch of the sun. 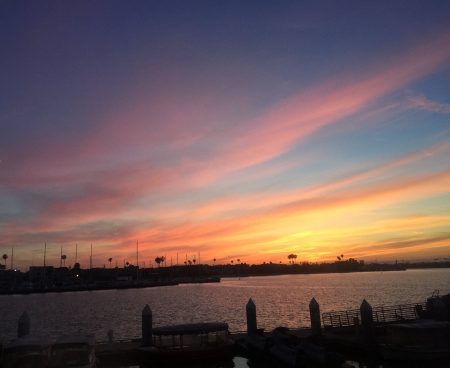 Down it sinks into the water 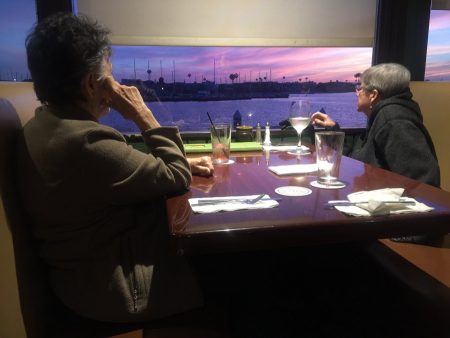 The girls enjoy the suns escapades

It quite interesting how the three of us can get lost in time just enjoying each others existence chewing on the fat of the past weeks events.

Did You Know? Although some sources attribute the phrase “chew the fat” to sailors, who during a period of resting and conversing, or while working together,  would chew on salt-hardened fat, there are no reliable historical recordings of this practice. It has even been suggested that the phrase is derived from a practice by North American Indians or Inuit of chewing animal hides during their spare time, and even of British farmers chewing on smoked pork, but again, there remains to be no evidence supporting these claims, and would require accepting a great deal of uncertainty in connecting the phrase from nautical origins to its modern metaphorical use. 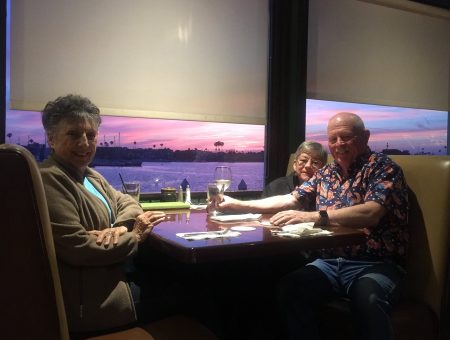 A nice gentleman took our picture

We could sit here every night and see the light of day disappear into the darkness but alas, we have to go home eventually! 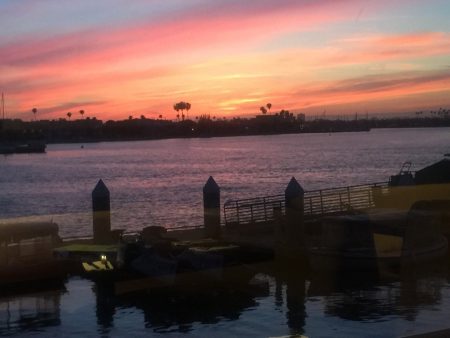 Good night Sol, see you in the morning!

It’s almost 8:00 PM so time to go home and hit the TV.  Paul made some chocolate chip tookies about 11:00 PM and then it was time to could the sheep!  Tomorrow is another bust day!.

Just an old retired guy trying to finish out my last years on this planet loving my best friend and wife, having fun, learning, and passing on helpful things to others.
View all posts by Paul →
This entry was posted in Food and Wine, Friends and tagged Friends, Malarkeys, Random Memory, Vegetable Gardening. Bookmark the permalink.
Powered by Maribol IMDB Plugin