Tuesday was a let down after such a great Monday 4th of July.  We worked around the house, went to the dentist, and then finally headed for Old Ranch to have cocktails with the gang.  That evening we watched NCIS and hit the hay early. Needed to catch up on our sleep.

We watched a John Wayne movie entitled “Big Jake”  Summary: Big Jake McCandles is on the trail on bandits in this action drama that stretches from Texas to Mexico. It’s 1909, and the Old West is giving way to modern times. When the outlaw gang led by vicious John Fain raids Jake’s ranch and kidnaps his 8-year-old grandson, Jake’s wife, whom he hasn’t seen in 18 years, sends for her husband to rescue the boy. While the law gives chase in rickety automobiles, Jake saddles up with an Indian scout, a faithful dog, and a box of money. But paying ransom isn’t Jake’s idea of good old frontier justice. 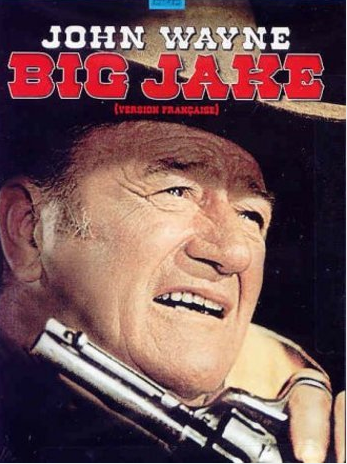 Title: Big Jake (1971)
Duration: 110 min
Director:
Year: 1971
Synopsis: The McCandles ranch is run over by a gang of cutthroats led by the evil John Fain. They kidnap little Jacob McCandles and hold him for a million dollar ransom. There is only one man who is brave enough and smart enough to bring him back and that man is Big Jake Written by Christopher D. Ryan <cryan@direct.ca>
Duration: 110 min
Categories:
Release Date: 26 May 1971 (USA)
Filming Location: Durango, Mexico

Just an old retired guy trying to finish out my last years on this planet loving my best friend and wife, having fun, learning, and passing on helpful things to others.
View all posts by Paul →
This entry was posted in Friends, Movies and tagged Old Ranch, TV Movies. Bookmark the permalink.
Powered by Maribol IMDB Plugin