Science And The Arts In One Day!

This was an adventurous day!  Mary and I attacked the refrigerator.  We wanted to see how many “science projects” we could remove without getting bitten or otherwise attacked.  Collen was brilliant; she went to visit her brother.

We opened the door, sounding much like Inner Sanctum!

Did You Know?  Inner Sanctum is a 30-minute American television anthology series based on Inner Sanctum Mystery, the radio series of the same name.  Thirty-nine episodes aired on the National Broadcasting Company in the 1953-1954 season.  It was spooky, just like our refrigerator/freezer.

On the bright side, I met a green hamburger who was very polite, and said hello as he jumped from the second shelf onto the floor and scampered out the back door with Scout in hot pursuit! 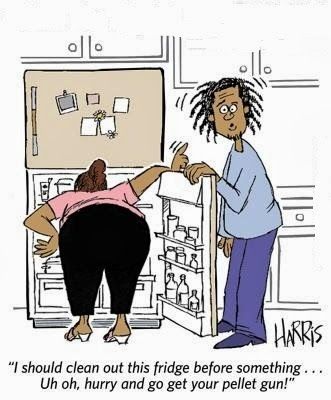 We worked 90 minutes, and the frig looked brand new and spotless in the end.  It was hard to imagine we had whipped cream with a use-by date of 1966.  We thought we had left a green sponge in the frig, but it was a piece of cheese.   The package was labeled hamburger, but hamburgers should not have eight legs, right?

As we walked into the other room, I saw the trash can on the patio moving; being quite religious (I am a devout coward), I ignored the movements hoping it would stop!

We visited Jan around 2:00 PM and returned home at 3:00 PM so we could get ready to go to the Les Ballets Trockadero de Monte Carlo, known affectionately as “The Trocks.” It was a Vicky-planned event, so no idea what might happen!

We went to Glendora at 5:00 PM and had dinner at the Canyon City Barbeque!  It was informal, but it made up for that in good groceries. 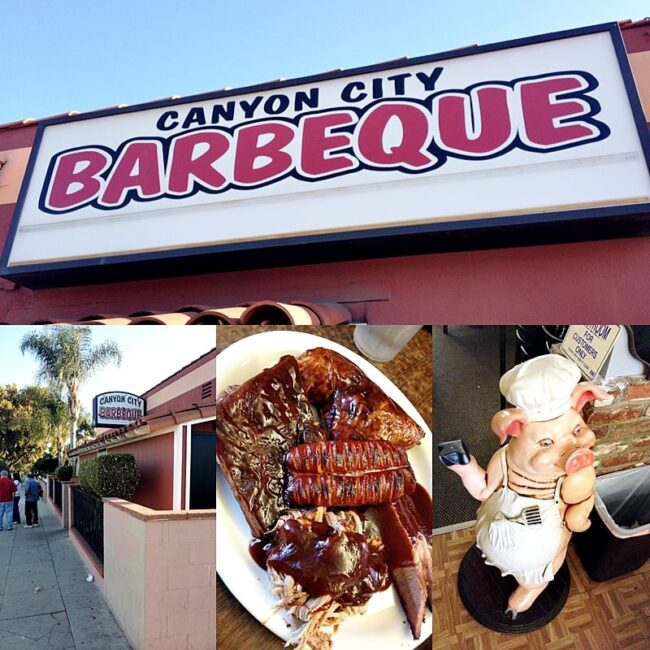 In the heart of Azusa!

Mr. Piggy kept an eye on everyone to make sure they behaved.

God came to Adam and said, “I’m going to give you something wonderful, something perfect, something that will make you happy.  “What’s it going to cost me,” Adam asked.  God said, “It will cost you your right arm.” “What can I get for a rib?” Adam asked. 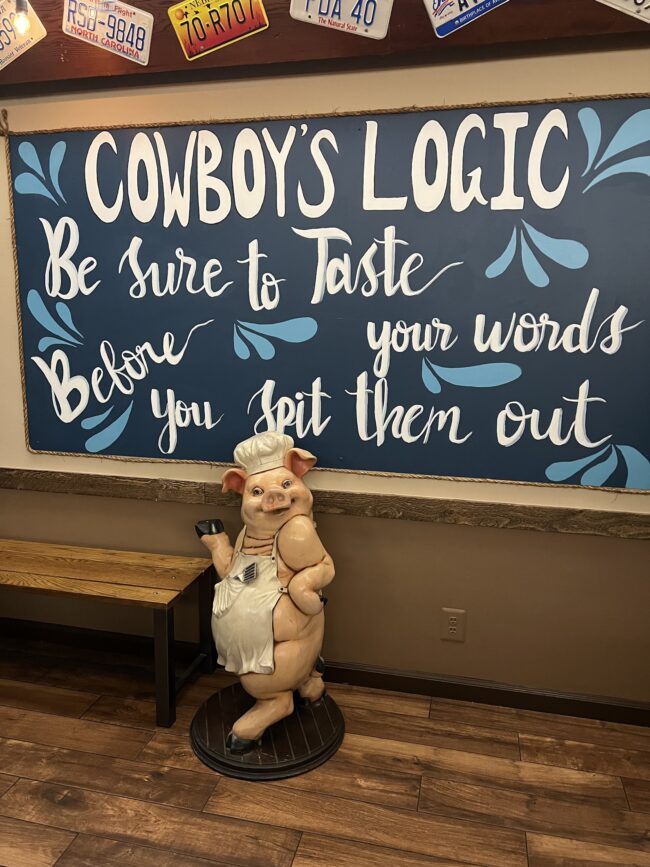 The cook came out to visit.

Mary and I each had three prominent old beef ribs.  They had kitchen paper towels on the tables; we now know why!  Beef ribs = messy!

Why did the Astronomer bring a slab of ribs into the bathroom?  He wanted to witness a meatier shower. 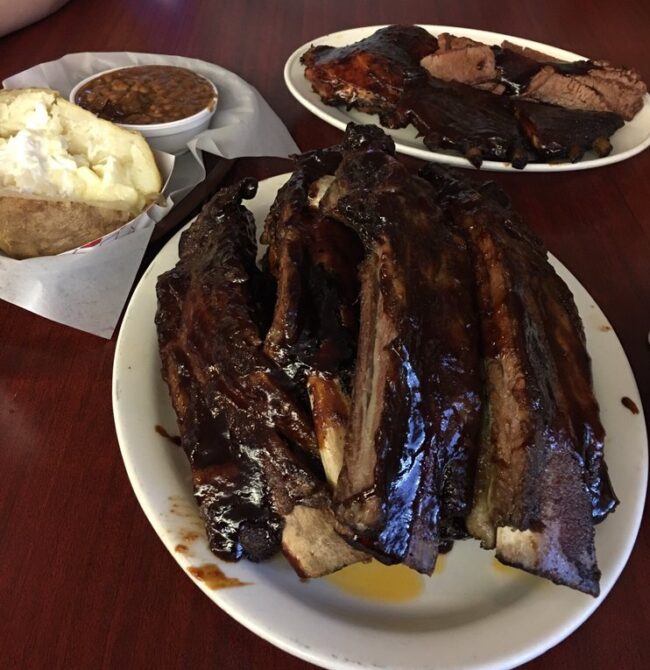 They had signs all over, which we enjoyed reading as dinner progressed.

Speaking about ribs, my aunts used to come up to me at weddings when I was in my early twenties, poking me in the ribs and cackling, telling me, “You’re next.” They stopped after I started doing the same thing to them at funerals.

The menu was interesting, so she tried the house salad and potato salad while I did the jalapeno mac and cheese.

Just for Mary, “What do you call a potato wearing glasses?  A spectator.” 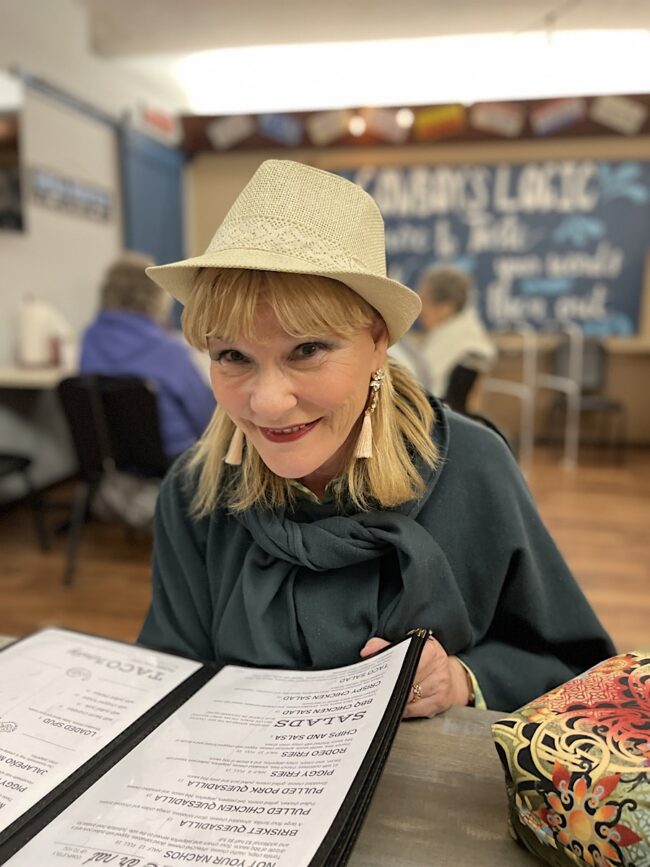 Donna went wild with all the choices; they brought two boxes home!  That means they will have BBQ all week long. 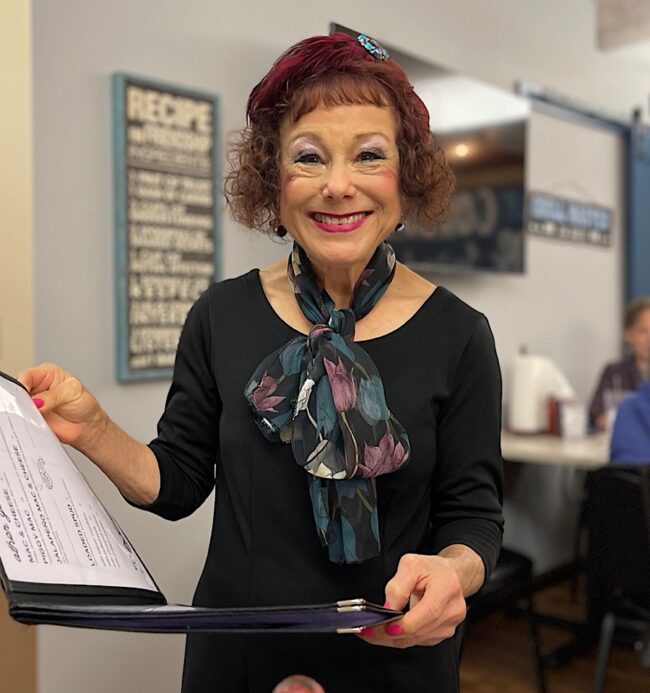 I should have brought a dark red shirt after seeing a plate full of beef ribs delivered right in front of me.  I stuffed a paper towel in my shirt to try and keep some of the splatters away! 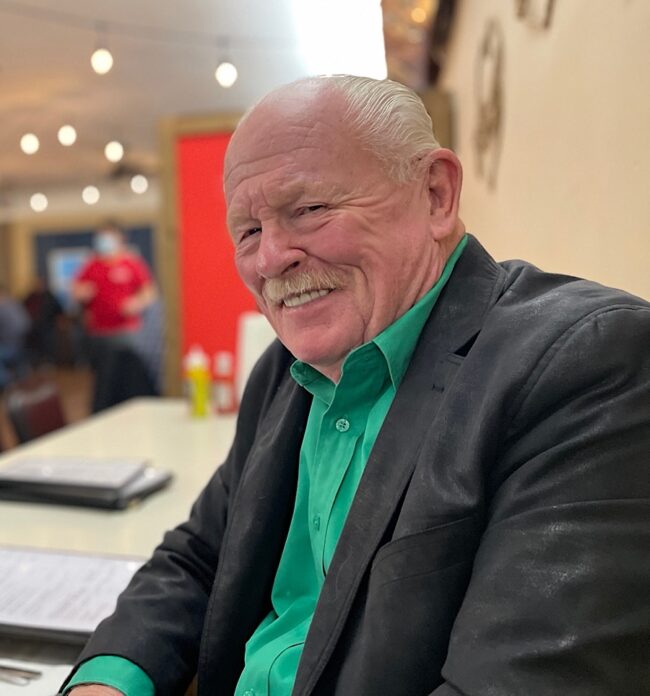 Do NOT buy a car from this guy.

Bob found his favorite wine right there on the menu, Red! 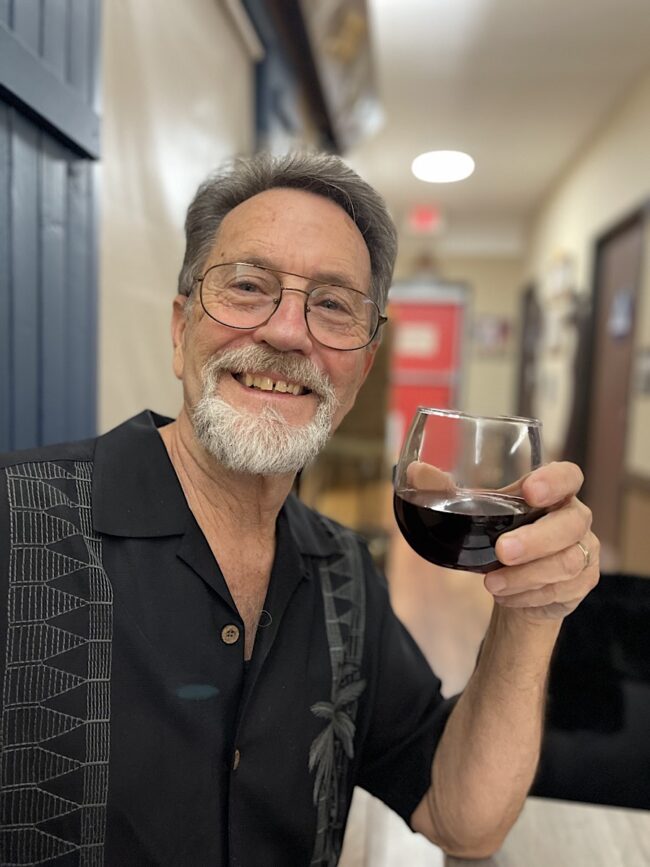 Jim and Vicky brought Dennis and Barbara; we all hit it off with laughing and chuckling going on continuously! 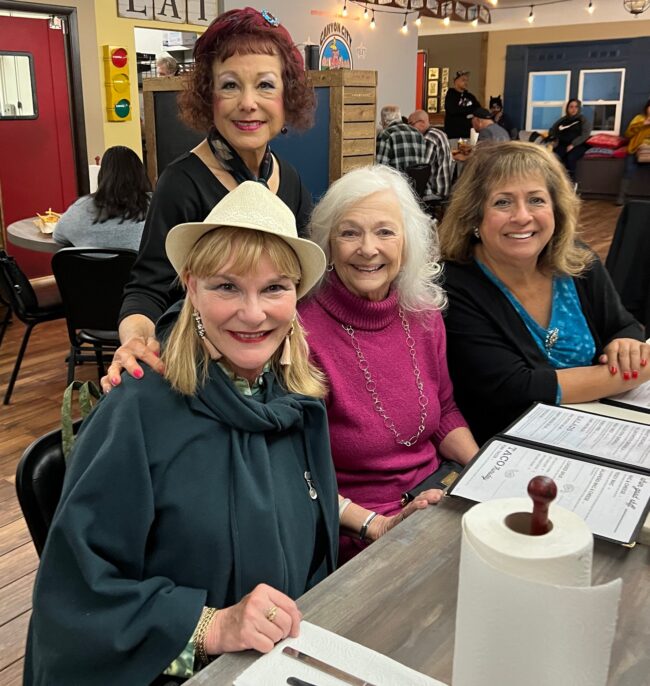 Ladies… you are about to be served! (Donna in back, Mary, Barbara and Vicky) 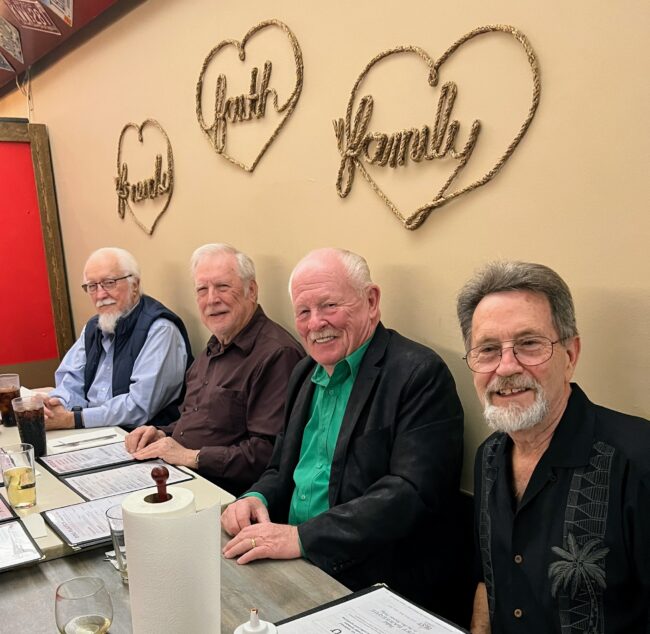 We are behaving (Except for Paul) (Dennis, Jim, Paul, and Bob) 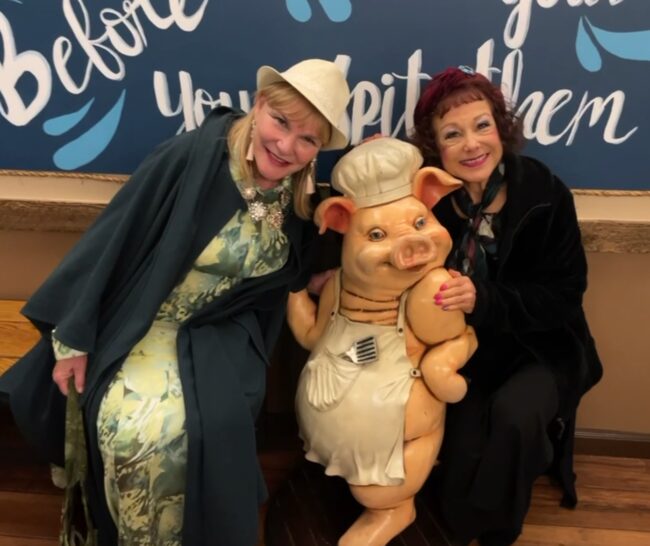 Getting the secrets form the chef!

We drove to the campus of Orange College to the Haugh Theater.  Located in the heart of the San Gabriel Valley, the Haugh Performing Arts Center at Citrus College is committed to providing a comfortable, safe, affordable, and inviting environment for patrons and performers alike.

Programming is selected to support student’s academic needs and our audiences’ artistic expectations.  Community users of the facility are offered the use of the building at affordable rates, allowing the college to achieve its desire to be a regional hub for fine arts activity.

Hilarious and “on point,” this is the ballet as you have never seen it before.  For nearly five decades, Les Ballets Trockadero de Monte Carlo, known affectionately as “The Trocks,” have emerged as a world-class company delivering a playful, entertaining view of traditional classical ballet in parody form and en travesty!

Lavish costumes, an over-the-top comedic approach, and technical mastery combine to show that everything truly is beautiful at the ballet!

We departed about 9:30 PM, and the Z’s drove us home; it was nice to be out and not have to drive.

Just an old retired guy trying to finish out my last years on this planet. I lost my best friend and wife in early 2020. I was blessed again by reconnecting with Dr. Mary Côté, a long-time friend. Mary and I got married July 28th, 2021, and are enjoying life together and plan to spend the rest of our lives being a blessing to our friends and family.
View all posts by Paul →
This entry was posted in Food and Wine, Friends, Theater. Bookmark the permalink.