Monday Has Arrived; Back To The Grind!

Fact: The United States walks the least of any industrialized nation. The average Australian takes 9,695 steps per day (just a few short of the ideal 10,000), the average Japanese takes 7,168, the average Swiss: 9,650, and the average American just 5,117.

Ha Ha, we are well on our way to walking 8,000+ today. We walked Five Miles this morning, and he really liked it! 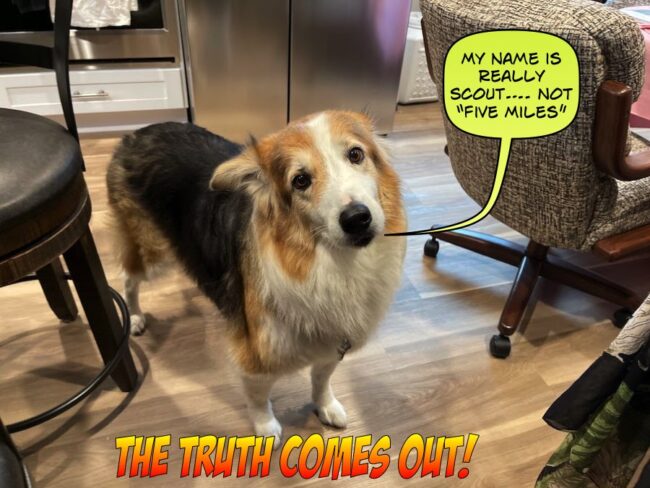 Scout is a big blabbermouth!!

I learned something today, which I should have known anyway. Read the “DidJaknow” below!

Did You Know? Have you ever wondered how dead dinosaurs turn into oil over time? The general idea that oil and petroleum come from dinosaurs is prevalent in America, with frequent references in pop culture, as well as the use of terms like “fossil fuels” in the media. But how a dinosaur skeleton transmutes into crude oil is still, for many, shrouded in mystery. That’s because, essentially, crude oil doesn’t come from dinosaurs at all.

In 1933, the Sinclair Oil Company hit the Chicago World’s Fair with a presentation on dinosaurs to promote the exciting link between the giant land beasts and the eventual formation of the gasoline sold by the company. Sinclair had started using the image of a Brontosaurus (now referred to more accurately as an Apatosaurus) on its signs three years earlier and found it was a hit with children. Sinclair came to the World’s Fair with a whole exhibit on the supposed connection to promote the brand and the perceived science behind it.

The complex and often confusing formation of crude oil starts with some of the smallest organisms on the planet. Then – through a process that takes tens of millions of years, occurs thousands of feet below ground, and depends on complex chemical transformations.

We worked around the house for most of the day until 3:00 PM when we headed to our PT session. We cleaned the garage before leaving for PT, and I installed the second Wi-Fi-controlled lawn sprinkler controller. As I turned on and off the zones, Mary would tell me what to label them. 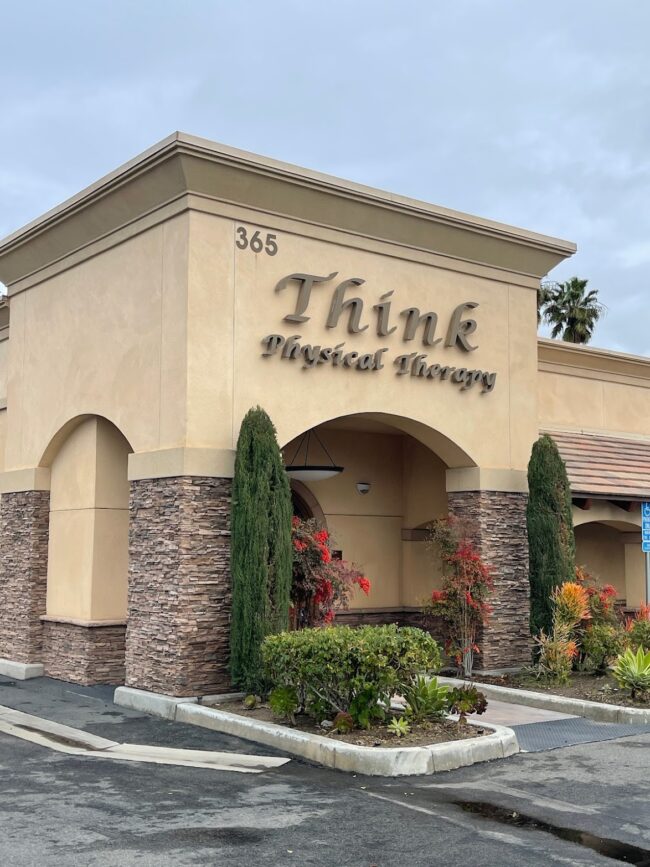 Mary and I have appointments together for the next couple of weeks!

OMG, I was tortured by many machines, and the PT Whizard bent my legs into positions only seen on Saturday morning cartoons. I went into the place feeling great and came out on a stretcher. I wondered what he meant when he said, “We are going to work on your core today!” 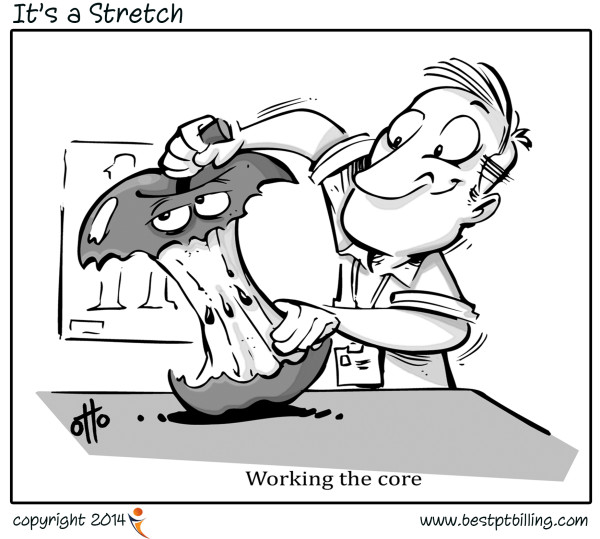 He did exactly that! (He did refer to me as “a seedy character.”

We stopped by CVS and perused all the meds to see if we needed anything more for home. Then Mary fixed a great dinner of leftovers; we are attempting to empty the three freezers so we can begin cooking again! We had some pot-roast, pasta with broccoli, and the last of cheese and macaroni á la Kosmetatos.

While she was cooking, I attempted to assist her. I asked Mary, “Did you hear about the pessimist who hates German sausage?”  To my surprise, she responded immediately with, “He always fears the Wurst.”  The girl knows her German.

While dining, we called several people, including Colleen, who we talked to for 45 minutes),  Irene, and Vicky. We used the batphone to call Dianne, and she was cooking in her 1950s styled kitchen. I love visiting her as it turns back my clock to my Mom’s kitchen in the early 1950s. The average size of a new house in 1950 was 983 square feet, and the cost was $7,354. 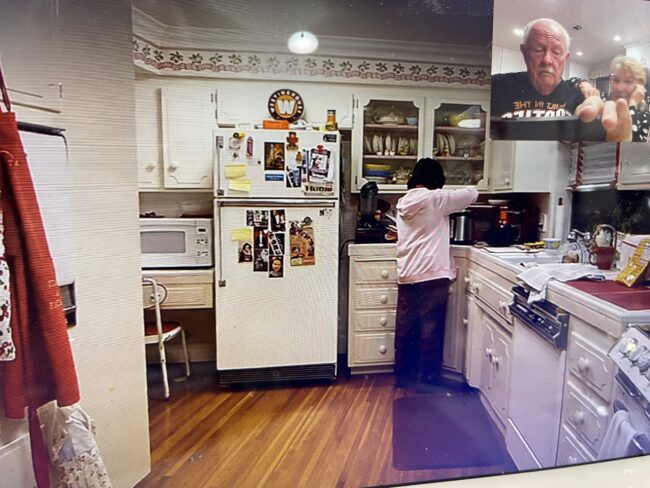 Scout was tired from working all day by the end of dinner, so he curled up with his babies by the fire and went to sleep. 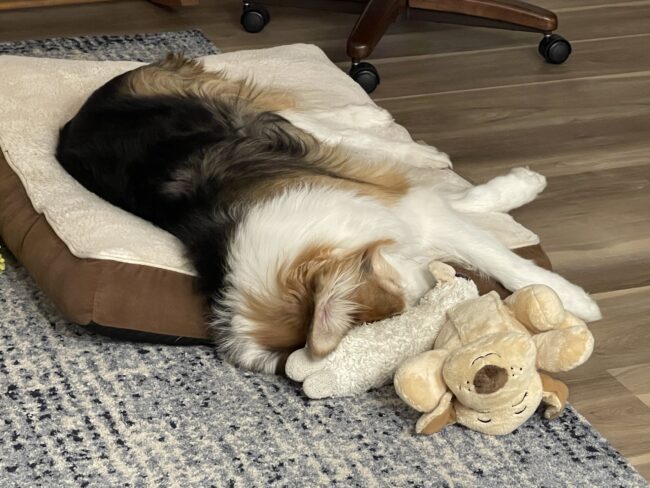 We could not let this go on; after all, he is a working dog! Mary got his brush and removed seven pounds of fur, enough to stuff a small pillow. They were nose to nose at the end of the brushing (Mary is on the right). 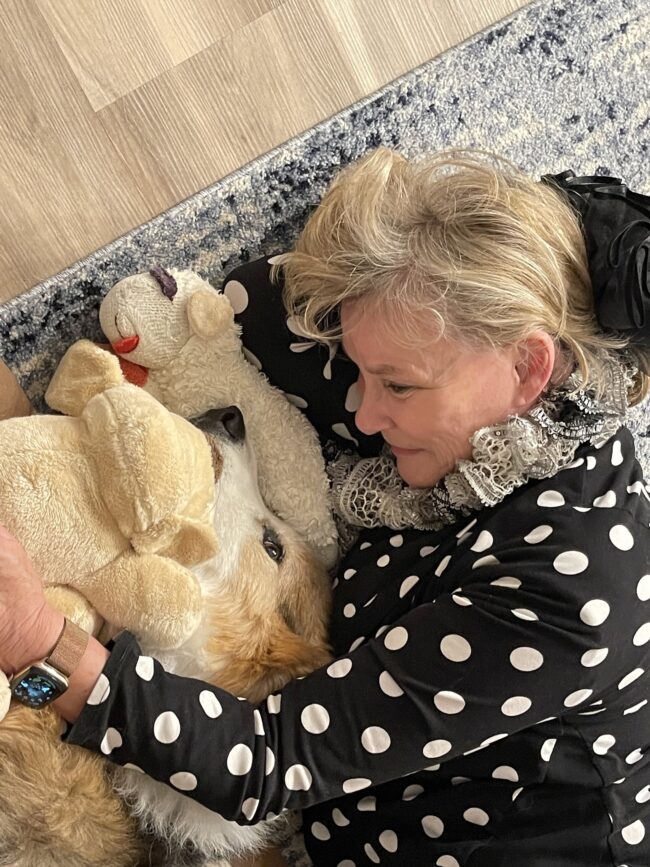 We love our baby; dogs are an interesting lot. Scout, The Wonder Dog, sounds like he will take you apart and spit out the remains. He knows our Gardner now but still goes bonkers when Carlos shows up. I send him out to meet Carlos, get a quick scratch from Carlos, and then Scout goes back to rest.

It was 8:00 PM, and we decided to watch Topper on TCM. We did most of the movie, but the sandman came by early.  Just before going to sleep I asked Mary, “Why do dragons often sleep during the day? So they can fight knights.”